What are Hindu Gods and Goddesses weapons names

Hindu Gods and Goddesses always will be having one or more weapons in their hands. 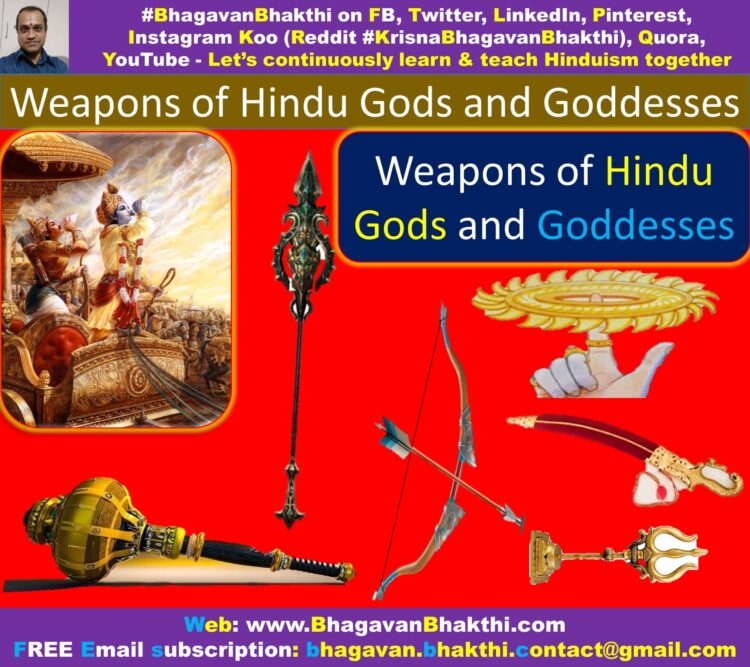 Starting from Bhagavan Sri Vishnu all other Devatas / Demigods also hold various types of weapons in their hands.

These weapons showcase the greatness of the Hinduism.

Hinduism is highly tolerant Dharma, but if someone wants to disturb the integrity of Sanatana Dharma,

and will completely destroy the ‘adharmis’ and again Dharma is reestablished on this earth.

Same thing has happened in all the avatars of Bhagavan Sri Vishnu and other Devatas.

Now, let us move forward and let us know the various kinds of divine weapons that are been used by Hindu Gods and Goddesses:

List of Hindu Gods and Goddesses weapons names are as given below: 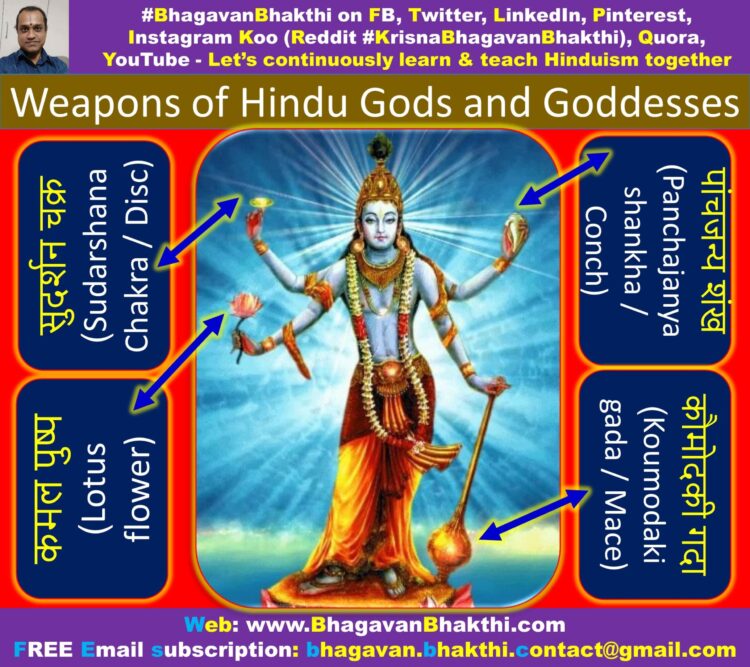 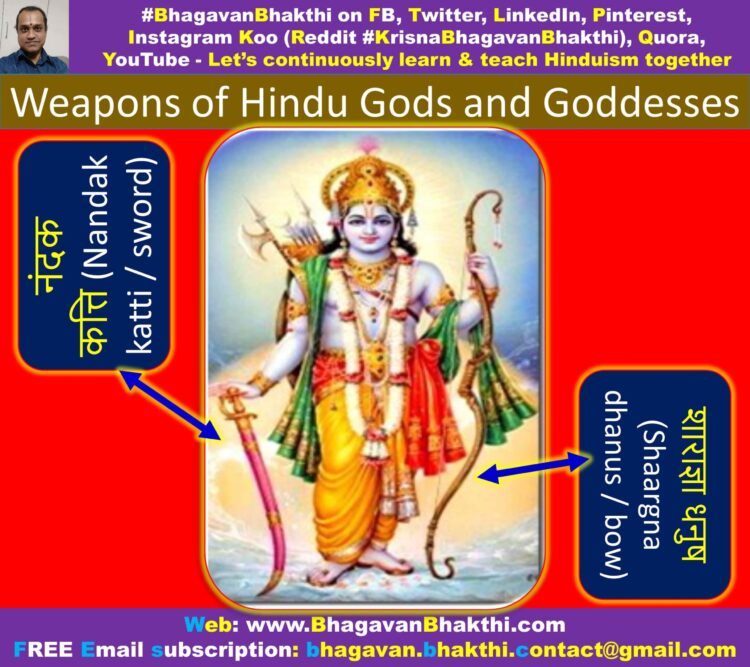 Lord Varaha Svami used his own tusks as a weapon to kill the Rakshasa Hiranyaksha. 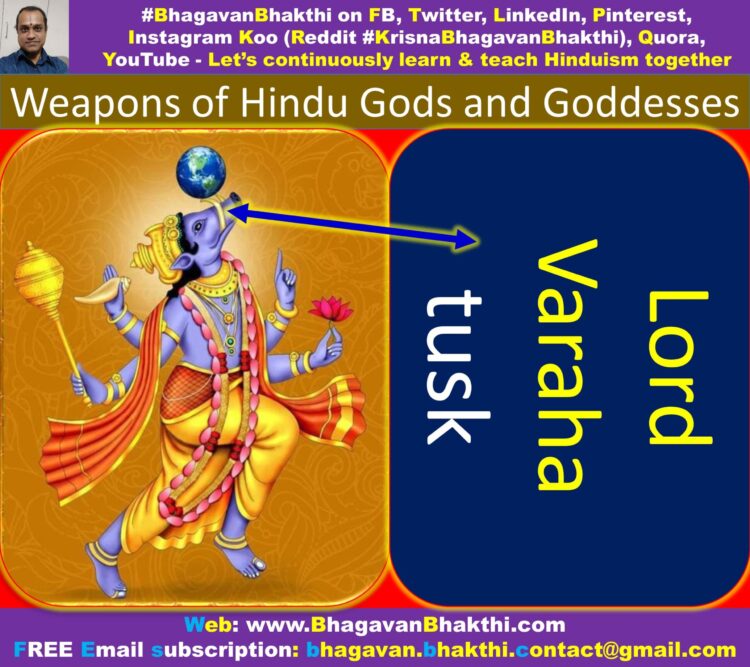 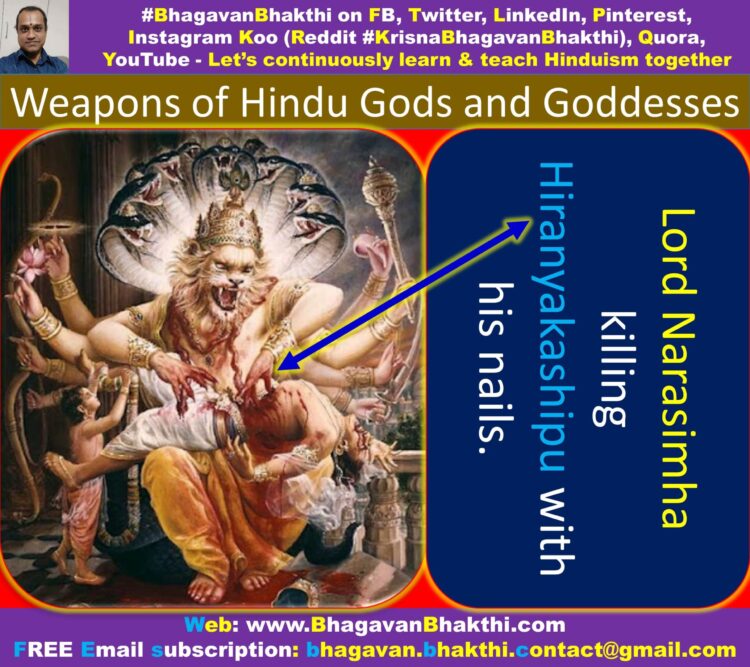 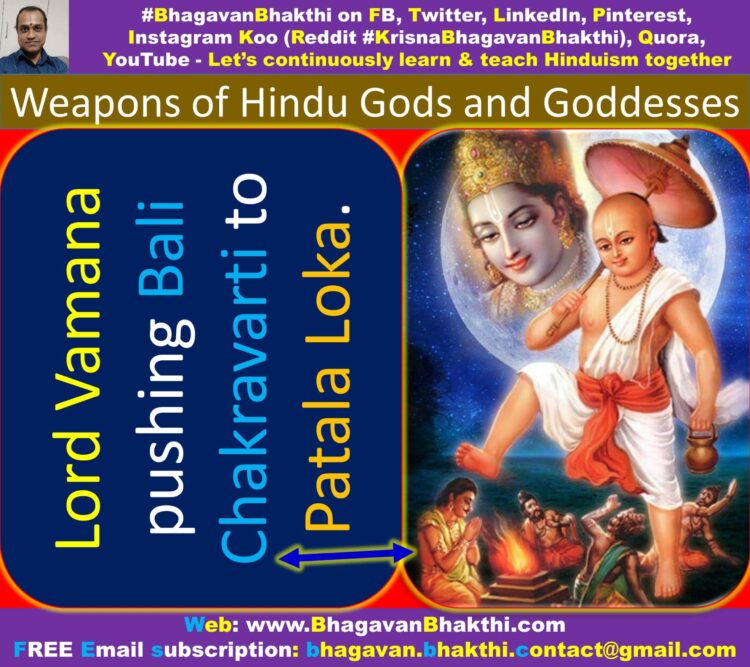 Lord Parashurama used Parashu the axe to kill the adharmic (vile) Kshatriyas on this earth. 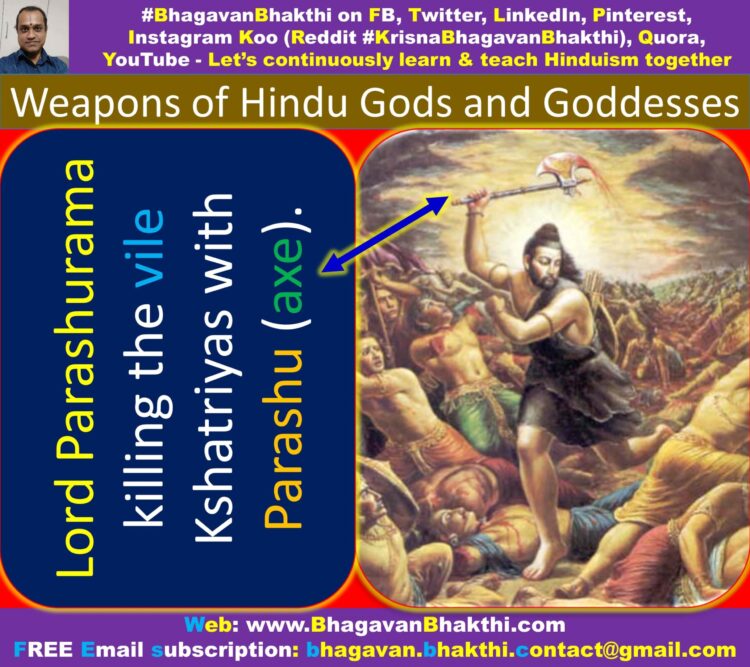 As Sri Rama was directly Bhagavan (God) and he can create any number of arrows to kill or destroy anybody.

Since Lord Rama holds the Kodanda Dhanush, he is also called as Kodanda Pani (Holder of Kodand bow). 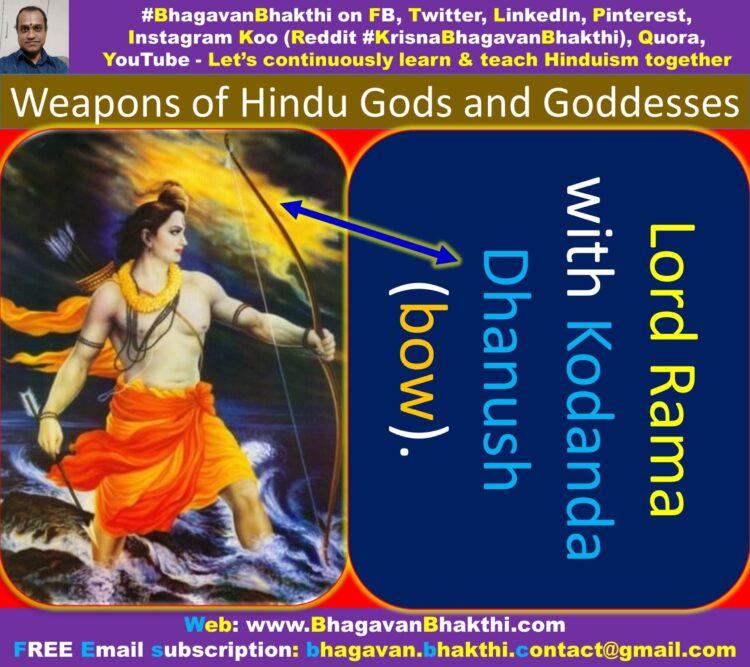 Bhagavan Sri Krishna not only used the following: 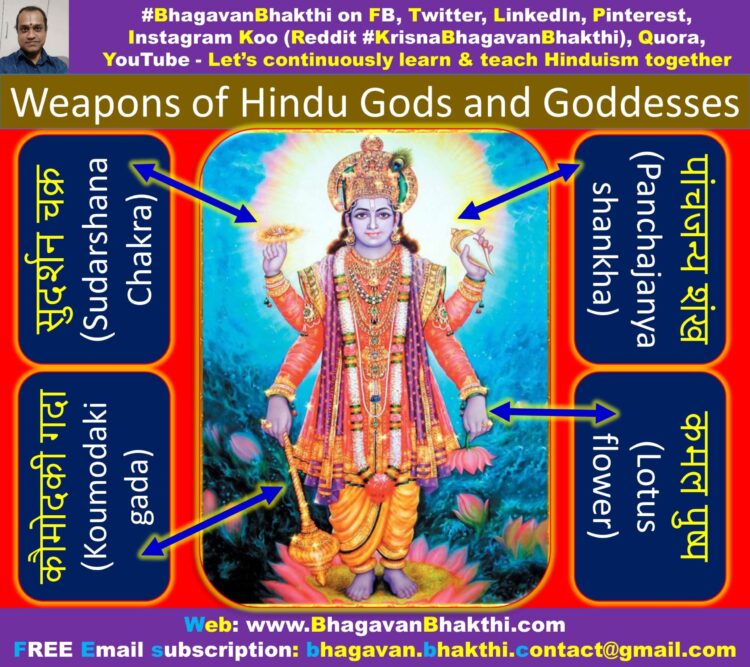 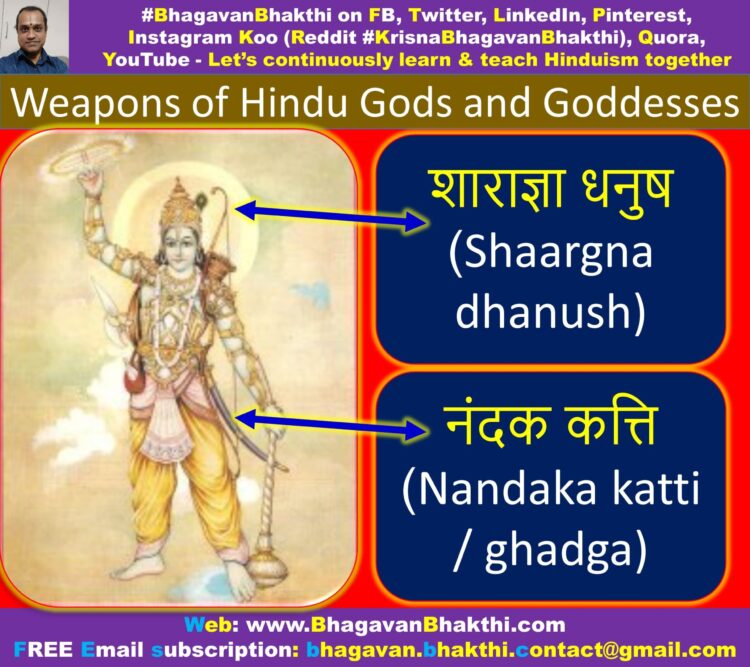 But also used political & military strategies etc. to destroy and kill several of the Rakshasas and enemies on earth.

Note: It should be noted that, Bhagavan Sri Vishnu / Sri Rama / Sri Krishna (or any avatar of Sri Vishnu) can use anything as a weapon to get the job done.

Be it physical or emotional or intellectual or verbal or any Dharmic way.

Whatever Lord Vishnu will always be in Dharmic way and he never opts for any Adharmic way.

What Lord Vishnu does, will become Dharma automatically.

As he is both the material cause (upadanakarana) and the efficient cause (nimittakarana) of everything,

including time – space, there is nothing that cannot serve as his weapon in these unlimited universes. 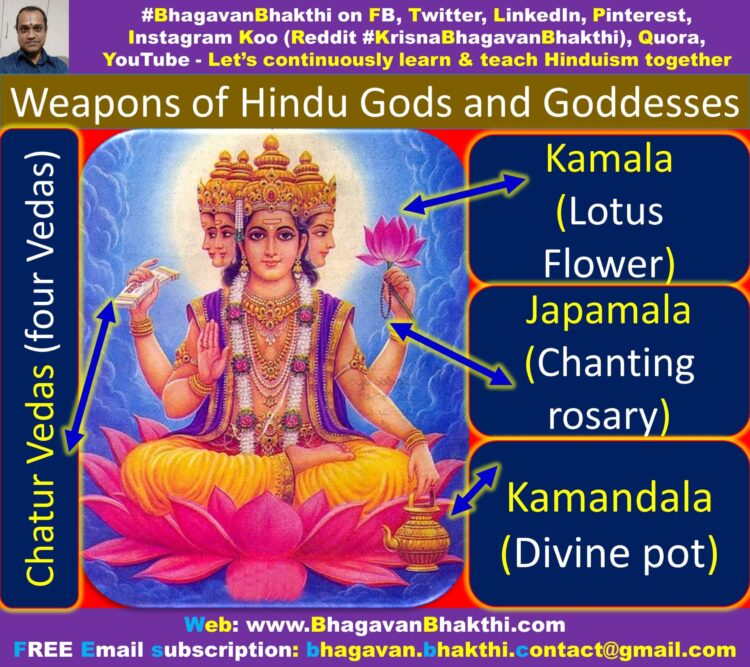 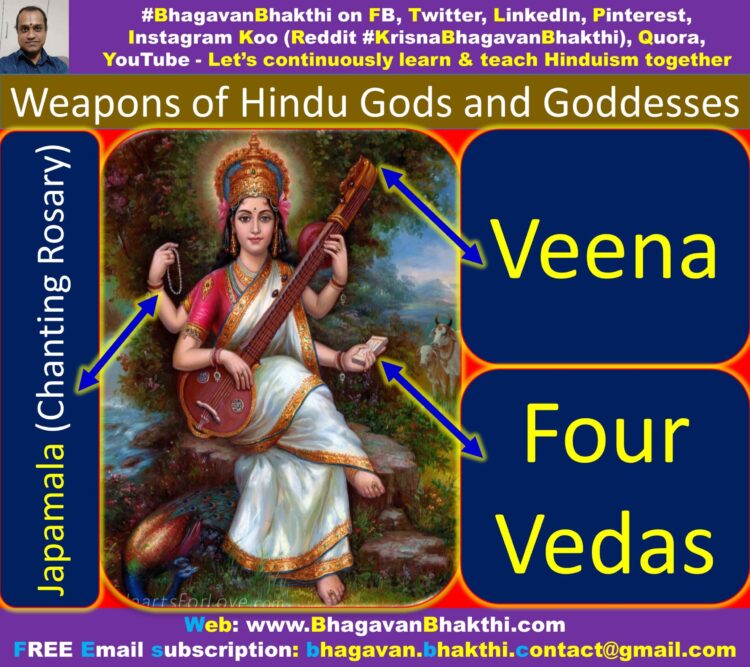 He will be the Sri Chaturmukha Brahma Deva in the next Kalpa. His different avatars are Sri Hanuman, Sri Bhima and Sri Madhvacharya Ji.

As Sri Vayu Deva, he holds the ankusha (goad), gada / mace in his hands.

His one hand will be like an Abhaya mudra (daunt-lessness), which shows us that he is giving as all the courage to fight against all the impurities. 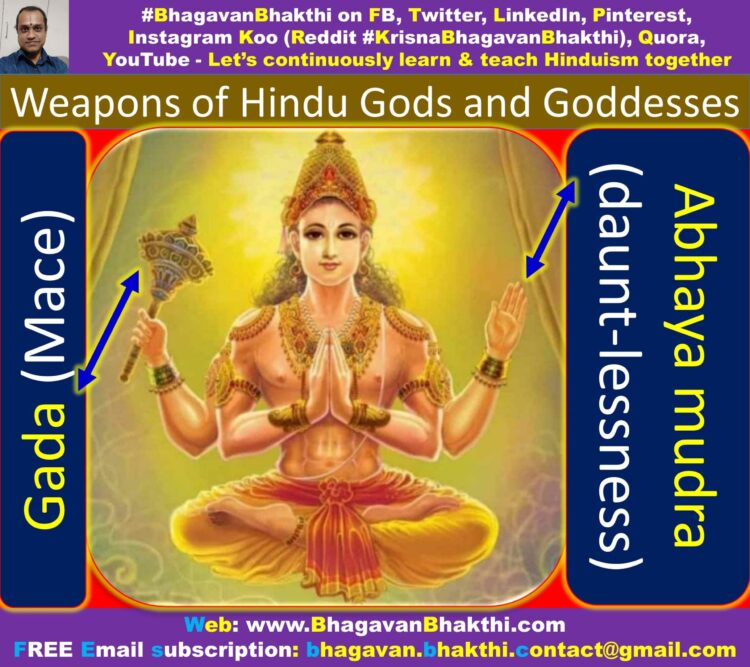 As Hanuman, his main weapon (not limited to) is gada / mace. 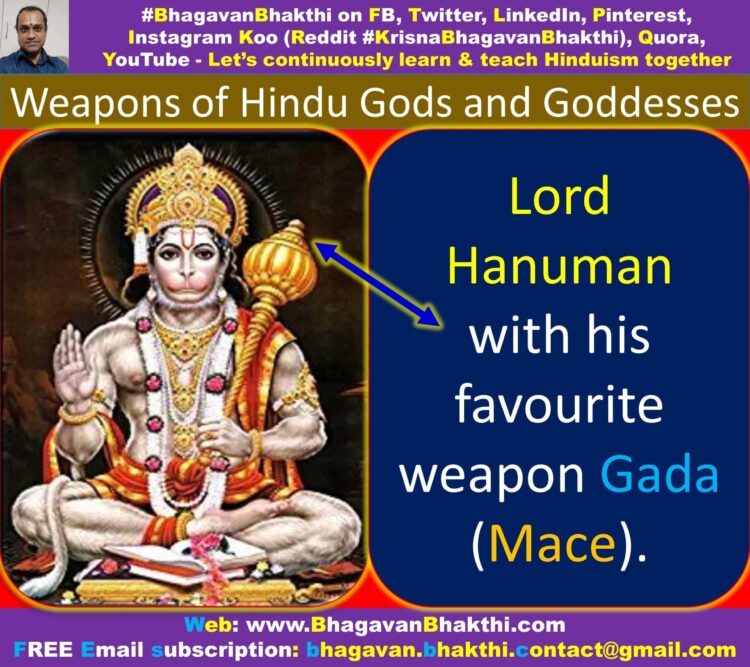 As Bhima, his main weapon (not limited to) is gada / mace. 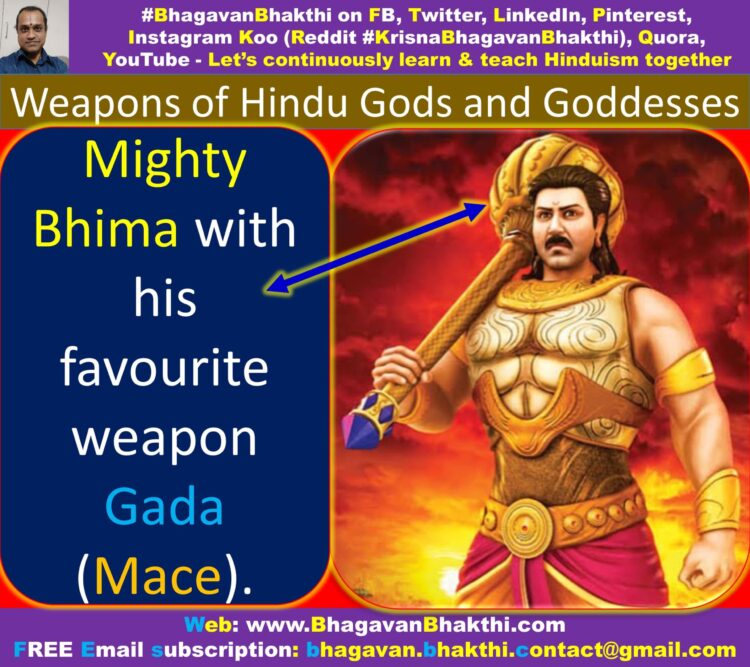 (It should be remembered that just holding gada / mace doesn’t mean Sri Vayu Deva / Sri Hanuman / Sri Bhima doesn’t know how to use the other weapons.)

(He is the greatest Bhagavan after Sri Hari and Sri Mahalakshmi Devi and he is at the same level as the present Sri Chaturmukha Brahma Deva.)

(He is very much capable of using the other weapons also).

As Sri Madhvacharya Ji, his main weapon is granthas (Divine texts). He is happy in spreading the Sri Hari’s Great Sanatana Dharma to the world. 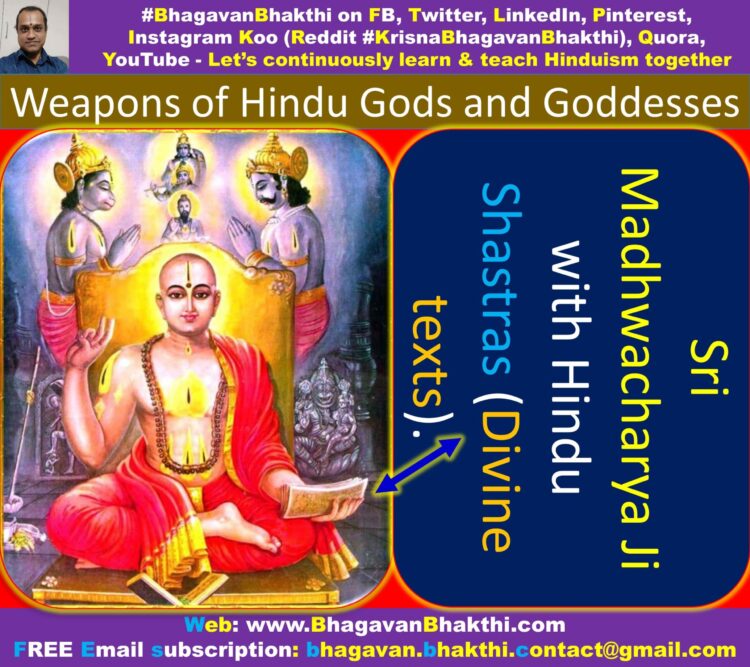 Sri Bharati Devi is the consort of Sri Vayu Deva (Sri Mukhyaprana Deva). In the next life she will be born as Sri Sarasvati Devi.

She holds the same things, which the present Sri Sarasvati Devi holds, that is the Japamala, Four Vedas and Veena in her hands. 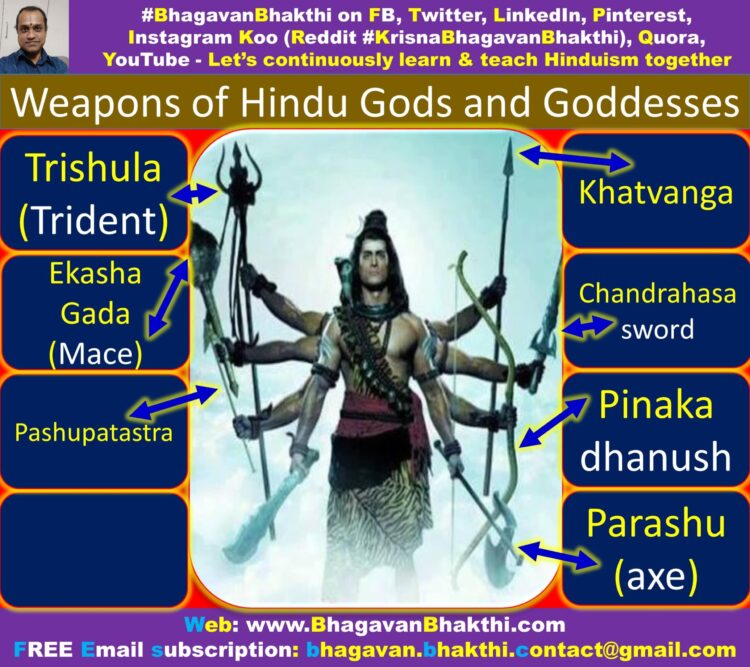 To know more information about Sri Durga Devi’s different weapons, you visit my another post with the below link: 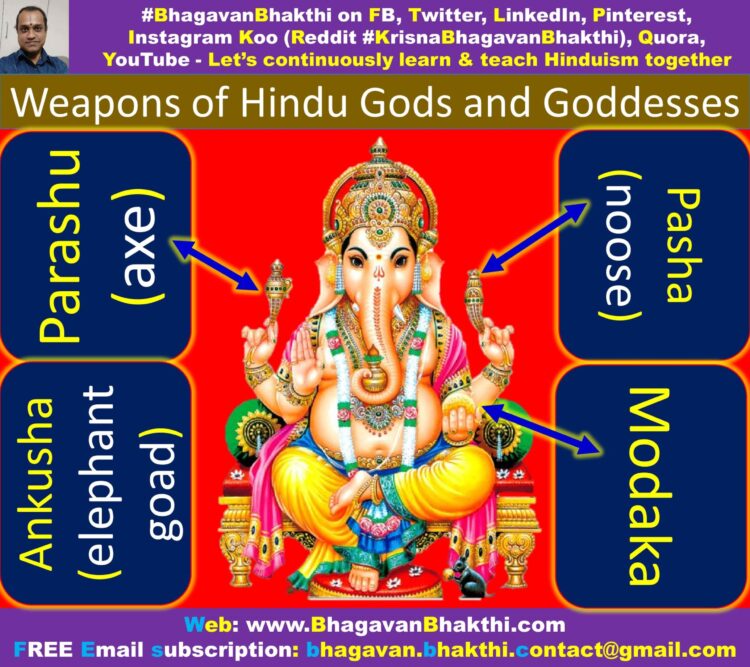 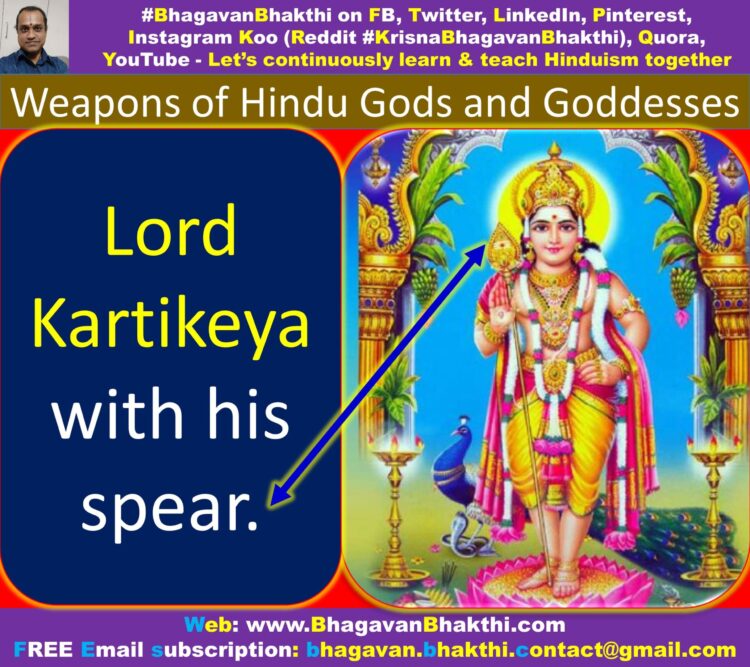 This great and strong weapon was made using the backbone of the a great rishi called “Dhadichi”. 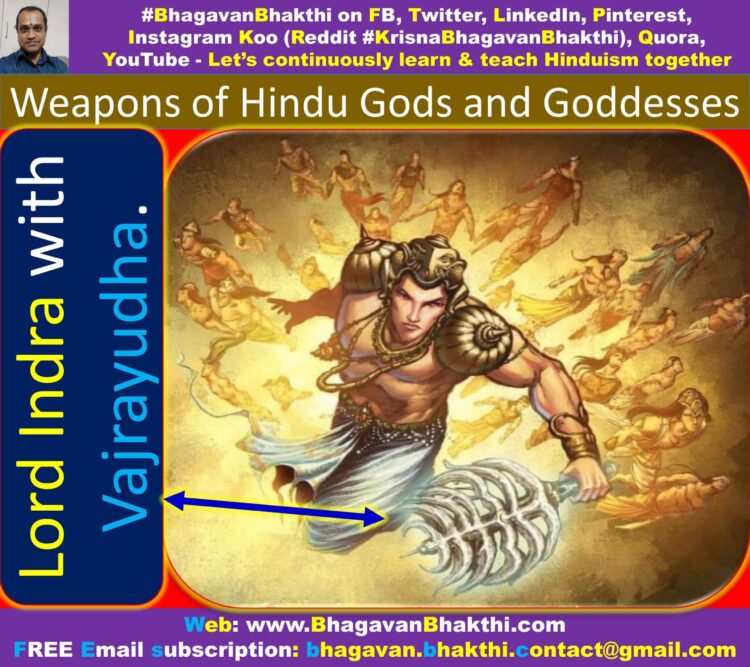 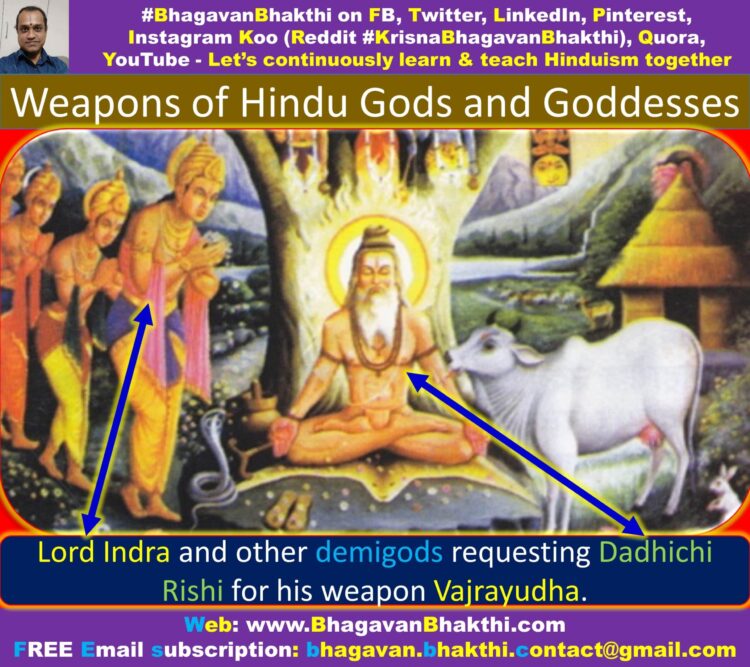 He has one astra called as “Indrastra” and also has Vasavi Shakti.

With this he also has “Maghavana”.

She is the wife of Sri Indra Deva.

Sri Surya Deva has an astra known as “Suryastra”. He also has “Tejaprabhastra”.

His consort name Sri Vaaruni Devi, Sri Ganga Devi and all the rivers which go and join the ocean (Indian ocean).

He has one astra known as “Varunastra”. 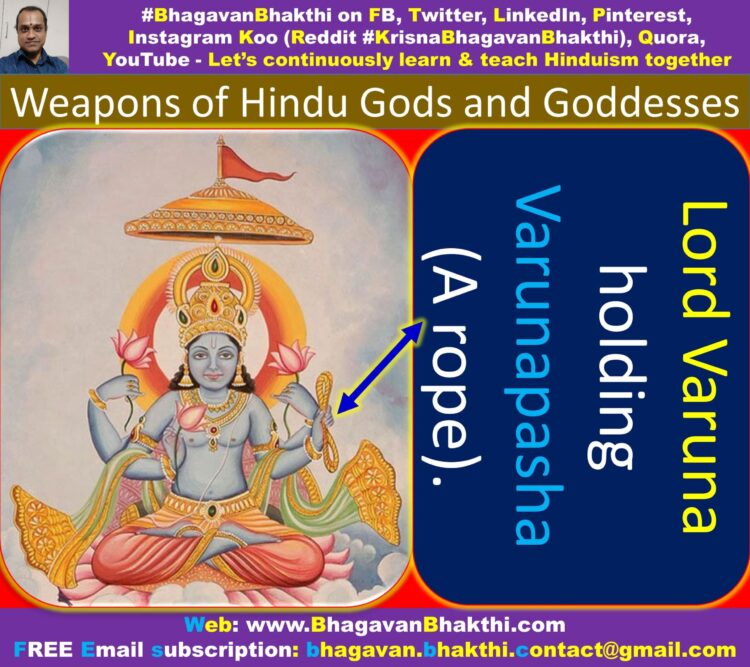 Sri Mitra Deva is one among the Aditya Devata (Adityas) like the Lord Indra Deva.

Sri Mitra Deva carries a sword and his consort name is (will be updated).

He has 27 consorts and all these consorts are 27 nakshatras. 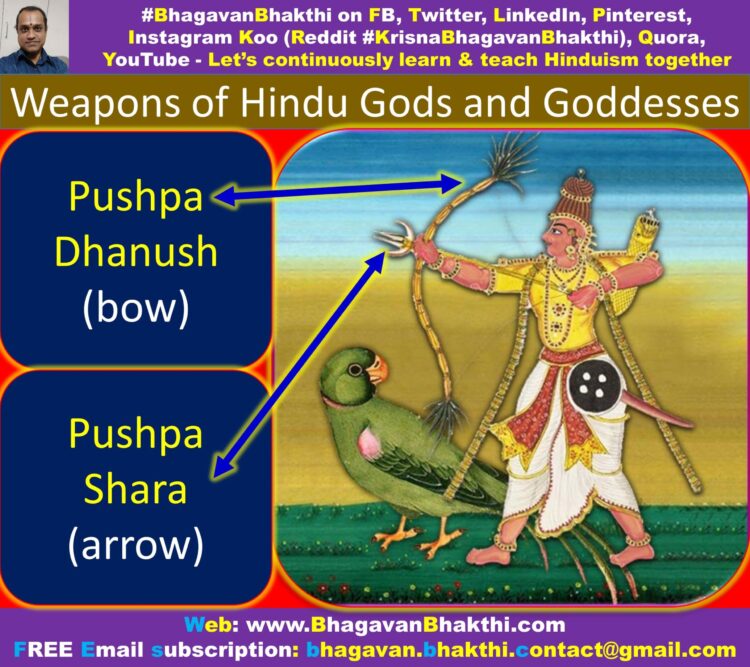 Sri Agni Deva carries a type of stick. He has an astra known as “Agneyastra”. His consort name is Svaha.

Even though Devarshi Narada doesn’t carry any weapon, but his Veena name is called as ‘mahati‘. 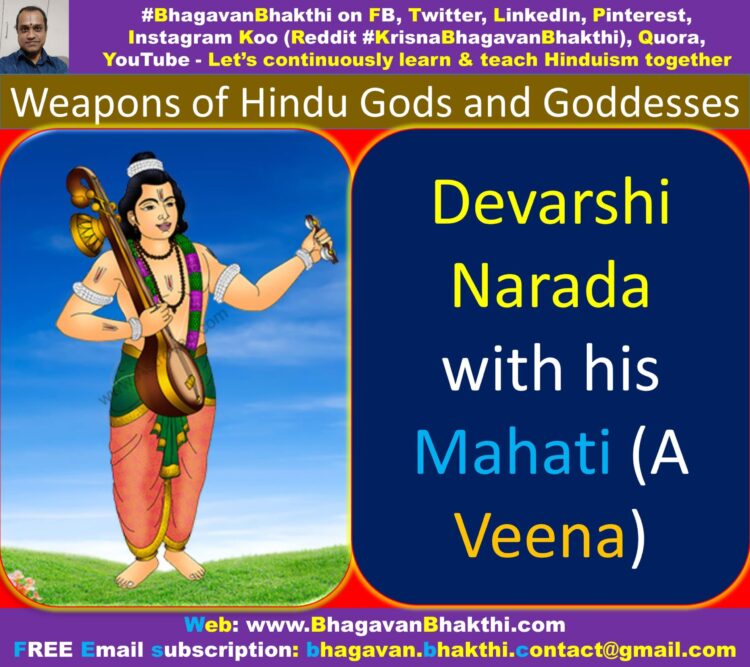 More names will be updated regularly, do visit this website after sometime to get the latest information.