Hindu Sanatana Dharma is just one in the world. We can’t find more knowledgeable people on this earth than the Indians, that is, we are aware of the Navagrahas (Nine planets) since unknown time.

We were able to find out the outer space information without any special instruments like of those today’s modern technology. Just doing pooja / worshipping Bhagavan Sri Vishnu was more than enough to gain unlimited knowledge.

No worship of any deity should be done without an understanding hierarchical (taaratamya) position of Bhagavan Sri Hari and all other Devatas.

But, there is a special thing to know about this. 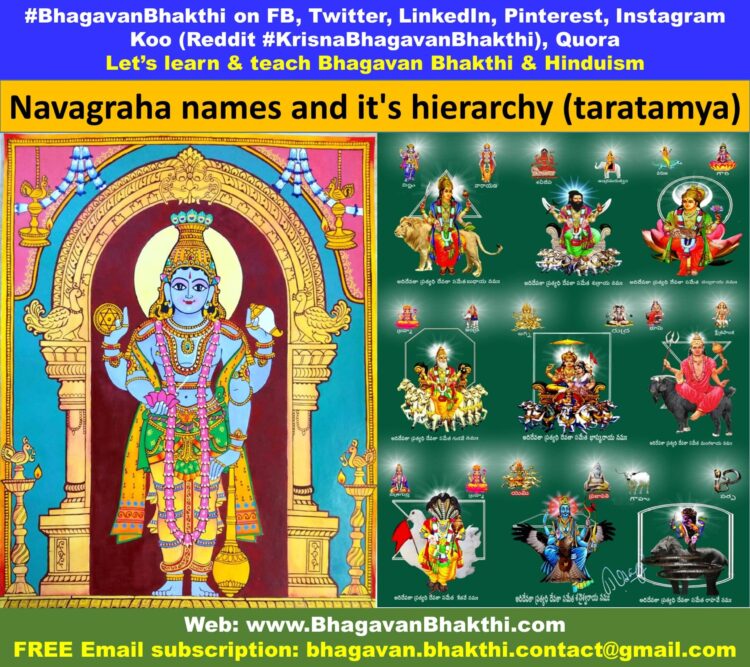 Bhagavan Sri Hari or Devatas’ worship should be done in different ways:

Worship as the Avarana (आवरण) Devata.

Worship as the Vyuha (व्यूह) Devata.

Bhagavan Sri Hari will be the Pradhana / Prime deity in worship of Shaligrama.

During the Sri Ganesha Chaturthi, Lord Ganesha is the Pradhana / Prime Devata.

Similarly during the Navaratri various Sri Durga Devi will be the Pradhana / Prime Devata on that particular day of the Navaratri.

When performing any auspicious puja, we will be worshipping Lord Ganapathi first, that means, we worship Lord Ganapati as the Avantara / Transcendental Devata.

The method of worshiping the Avarana Devata is little higher compared to the worship of other Devatas.

A Vyuha means a group. Some forms of the Bhagavan Sri Hari and few other Devatas will always be in a particular group.

For this a very good example is the Sri Hari’s Dashavatara (10 avatars) and also the Bhagavan Sri Keshava’s 24 avatars. 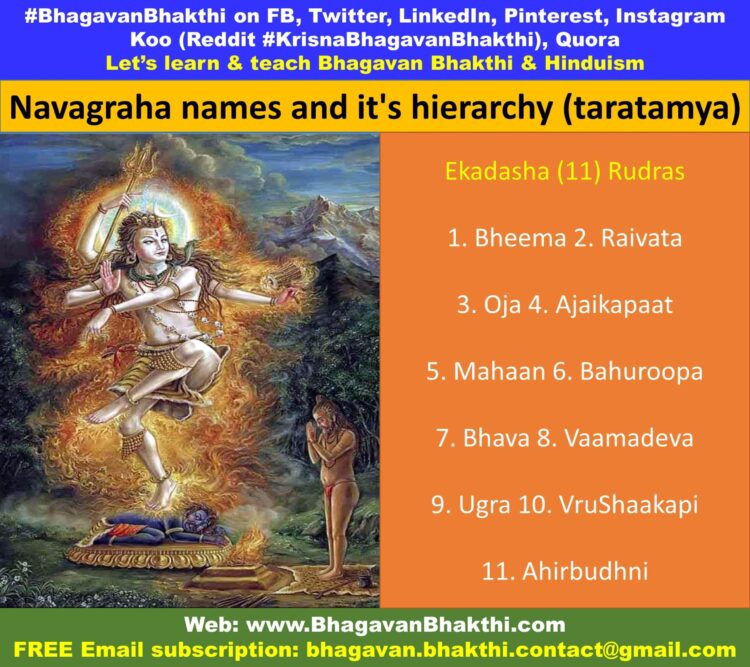 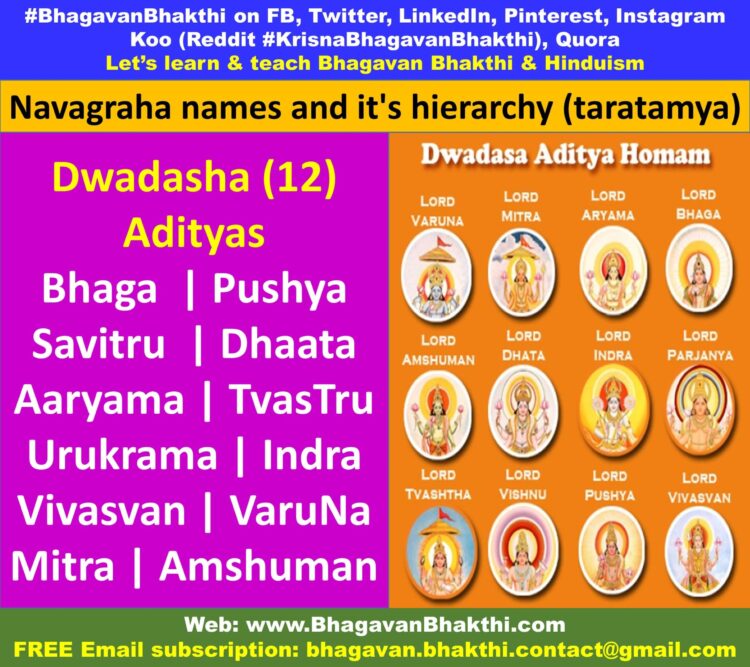 Names of ‘Ashta Vasus’ as per few of versions are as given below: 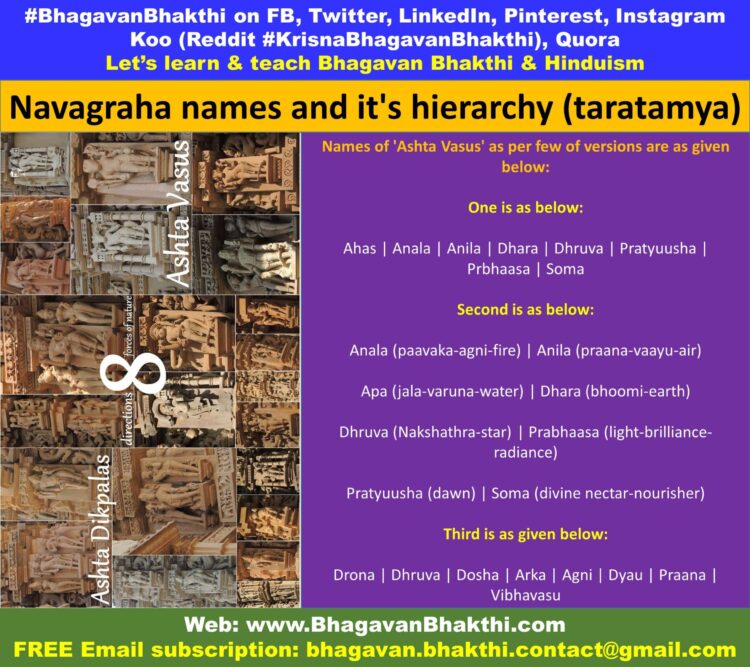 One is as below:

Second is as below:

Third is as given below:

Among the Dwadasha (12) Adityas Bhagavan Sri Hari is at the 12th position, among the Ekadasha (11) Rudras Lord Rudra (Lord Shiva) is at the 11th position (other 10 Rudras are lower in hierarchy compared to the Lord Rudra / Lord Shiva.

Sri Brihaspati (planet Guru, which we call as Guruvaara / Thursday – He is the Guru of all the Devatas) is having higher capability than Sri Surya Deva. But still Sri Brihaspati / Guru graha is at the 5th position.

Sri Brihaspati / Guru graha has to be worshipped at that particular 5th position itself and not at the higher position.

If we worship in this way, won’t there a breach of the Dharma?

No, it won’t happen.

Reason is, Sri Brihaspati / Guru graha is at that position, because of the agnya / orders of the Bhagavan Sri Hari.

Similarly, the Devatas being in that particular vyuga / group, although they hierarchical wise been at a better position than others, those Devatas will accept the worship / pooja as per their positions.

Another example is that, Sri Bhima being greater than Yudhishthira and others, but still being born as the younger brother of Yudhishthira and son of Pandu & Kunti Devi, still Sri Bhima was acting as a lower hierarchical person than others.

This is just because as per the instructions of Bhagavan Sri Hari / Sri Krishna.

Thus, we must be aware of the hierarchy when we are doing the pooja.

If we are aware of the correct hierarchy, we will definitely get the great aashirvaada of both Bhagavan Sri Hari and other Devatas.

When doing pooja of the pradhana / prime Devatas, we should always do pooja in the hierarchical way itself and not in the other way or not as per our wishes.

Only after we do the pooja of Bhagavan Sri Hari, we need to do the Shraadhha and tarpana.

But, we should always be aware of the capabilities (qualities) of both Bhagavan Sri Hari and other Devatas while doing the pooja.

Only after knowing the correct hierarchical position, we need to do the pooja of the Bhagavan Sri Hari and other Devatas.

We should always be aware of this.

Keeping in mind about the hierarchical position of both Bhagavan Sri Hari and other Devatas, will fetch us the great phala / fruits as per our pooja Karma.

The List of the Navagraha (nine planets) names with hierarchical position is as given below: 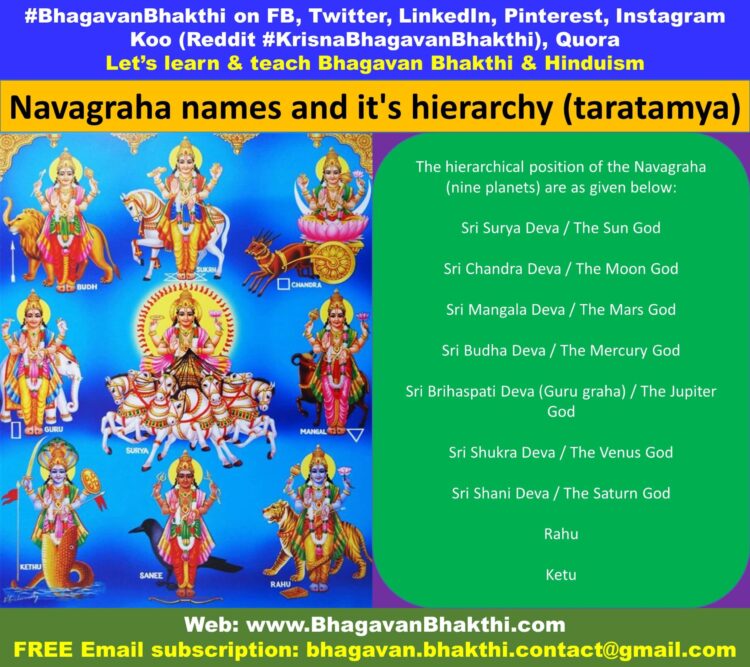 The nature and hierarchical position of the Navagraha (nine planets) are as given below: 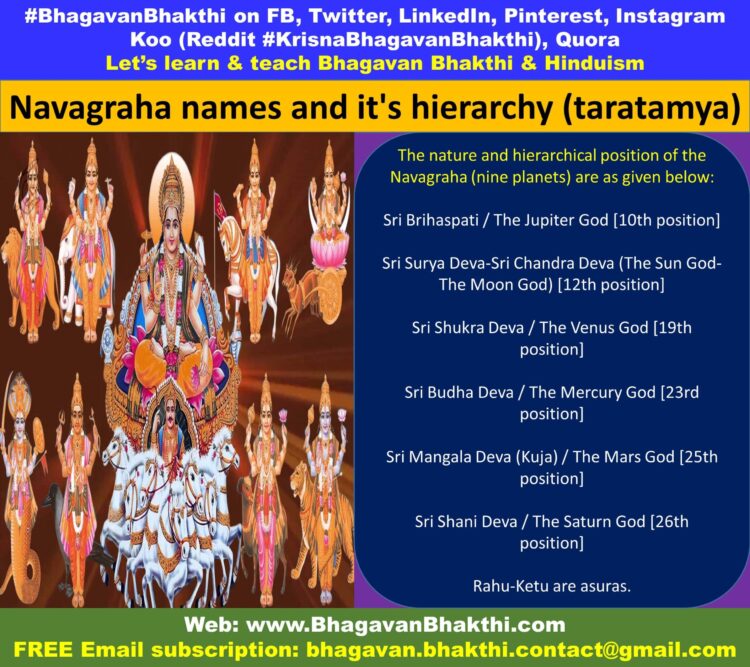 But, Devatas are also present inside them and thus these Devatas provide the poojatva (worshippable) position.

Again we should remember, all these are possible only because Bhagavan Sri Hari has instructed these to all the Devatas.