Pandavas are the sons of King Pandu, thus they got the name Pandava (Pandav) (Pandavas). 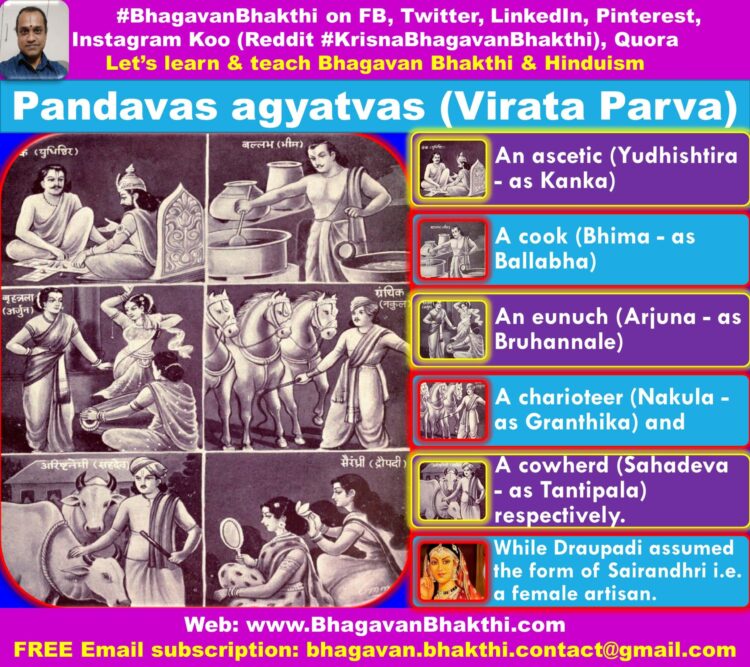 List of Pandavas agyatvas (Virata Parva) unknown facts are as given below:

No one should be able to recognize them during this Agyatvasa period.

The events of Virata parva that relate to the agyatavasa of Pandavas are described in this post.

Pandavas took leave of Dhaumya, other sages and Brahman’s and made up their mind to undergo agyatavas.

Before they entered the city they hid their weapons on a Shami (Banni) tree in the outskirts of the city.

5. Kanka : An ascetic (Yudhishthira – as Kanka)

10. Sairandhri :  While Draupadi assumed the form of Sairandhri i.e. a female artisan. 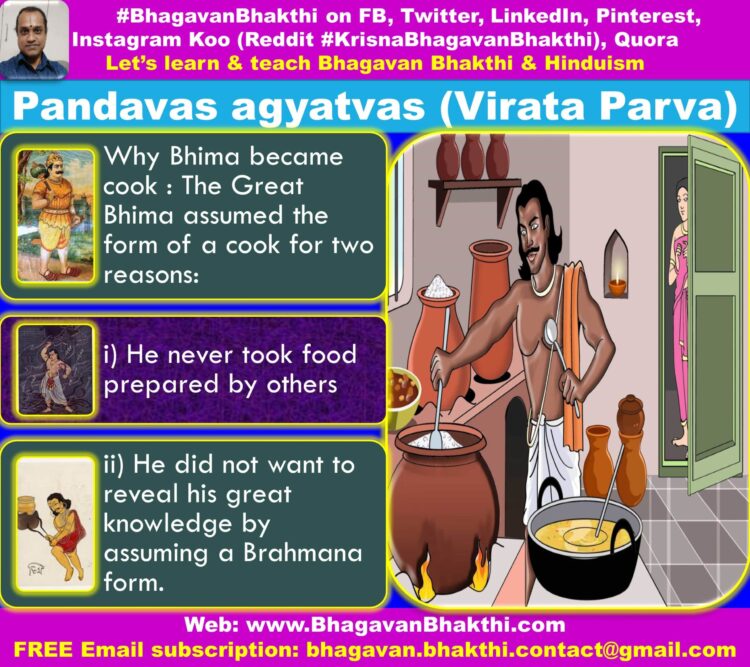 11. Why Bhima became cook : The Great Bhima assumed the form of a cook for two reasons:

i) He never took food prepared by others

ii) He did not want to reveal his great knowledge by assuming a Brahmana form.

12. Bhima didn’t served anyone : During their Agyatvas, they did not serve Virata or any other person.

and their eldest brother Yudhishthira in whom also Bhagavan (As antaryami) was present by the same name of Yudhishthira.

(But the Pandava Yudhishthira was not Bhagavan, but inside him as Antaryami, Bhagavan Sri Hari was present compared to other ordinary humans). 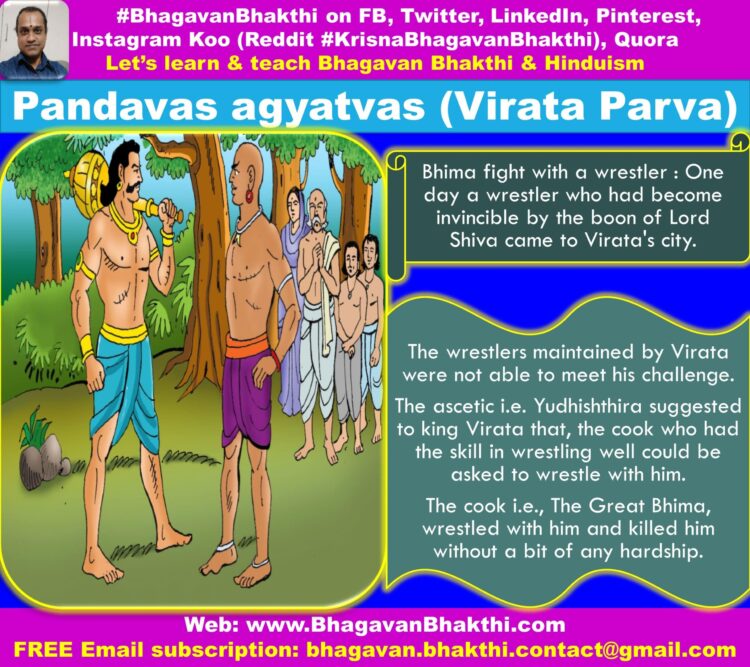 14. Bhima fight with a wrestler : One day a wrestler who had become invincible by the boon of Lord Shiva came to Virata’s city.

The wrestlers maintained by Virata were not able to meet his challenge.

The ascetic i.e. Yudhishthira suggested to king Virata that, the cook who had the skill in wrestling well could be asked to wrestle with him.

The cook i.e., The Great Bhima, wrestled with him and killed him without a bit of any hardship.

15. Kichaka is Killed by Bhima

Earlier Kichaka was away to conquer the neighboring kings. When Kichaka saw Sairandhri, he was captivated by her charm. 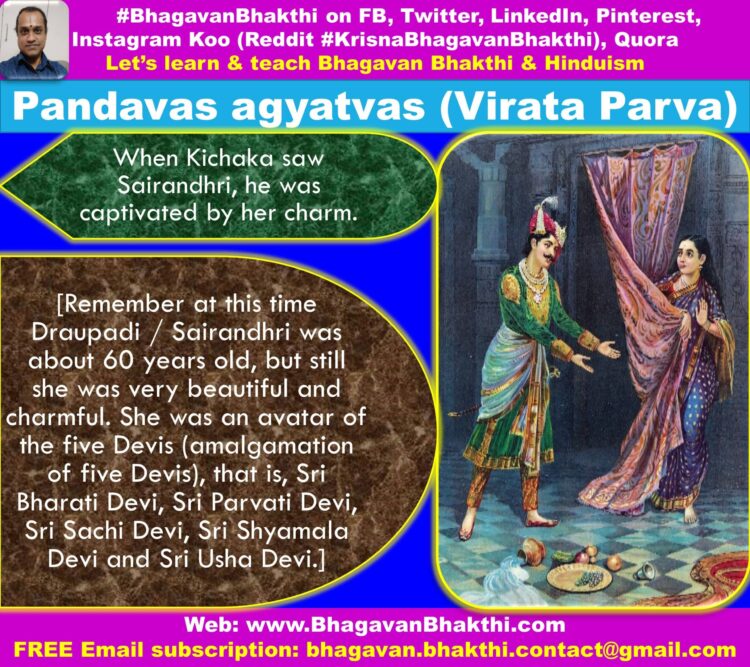 [Remember at this time Draupadi / Sairandhri was about 60 years old, but still she was very beautiful and charmful.]

To know more about Draupadi Devi, you can visit this link:

When Sairandhri went to Kichaka’s place, he tried to drag her. She pushed him aside and quickly started to run.

Kichaka chased her and tried to kick her. She prayed Bhagavan Sri Narayana present in Suryamandala.

Sri Vayu Deva entered into this demon Heti who came in an invisible way.

Sri Vayu Deva entered into this demon and pushed Kichaka to the ground.

While, The Great Bhima angrily looked at a tree. Yudhishthira prevented him. 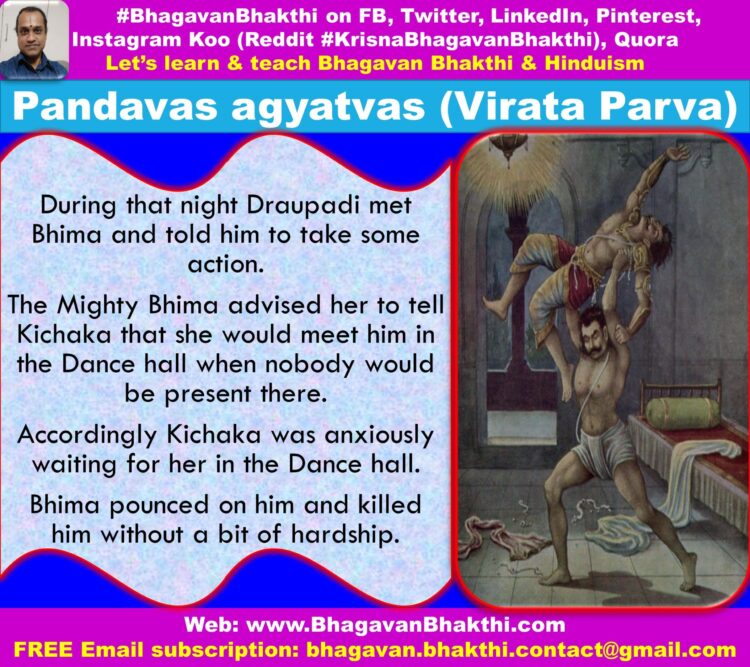 During that night Draupadi met Bhima and told him to take some action.

The Mighty Bhima advised her to tell Kichaka that she would meet him in the Dance hall when nobody would be present there.

Accordingly Kichaka was anxiously waiting for her in the Dance hall.

Bhima pounced on him and killed him without a bit of hardship.

When Kichaka was killed, his (Kichaka’s) one hundred and five brothers who had tried to tie and burn Draupadi, were also killed by Bhima with ease.

Sudesna asked Draupadi to leave the palace as she was afraid of her.

Draupadi asked her to wait for another thirteen days, so that their agyatvas would finish and they would go away from that place. 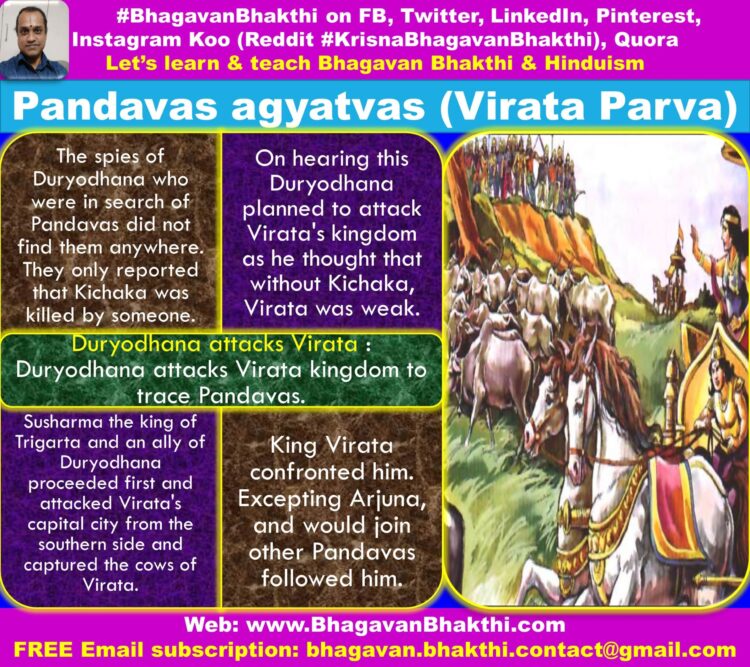 The spies of Duryodhana who were in search of Pandavas did not find them anywhere.

They only reported that Kichaka was killed by someone.

On hearing this Duryodhana planned to attack Virata’s kingdom as he thought that without Kichaka, Virata was weak.

Susharma the king of Trigarta and an ally of Duryodhana proceeded first and attacked Virata’s capital city from the southern side and captured the cows of Virata.

King Virata confronted him. Excepting Arjuna, and would join other Pandavas followed him.

Virata was arrested by Susarma.

The Great Mighty Bhima attacked Susharma and arrested him. Yudhistira asked Bhima to release him.

The next day Duryodhana proceeded with Bhishma, Drona and others and attacked from the northern side and captured the cows. 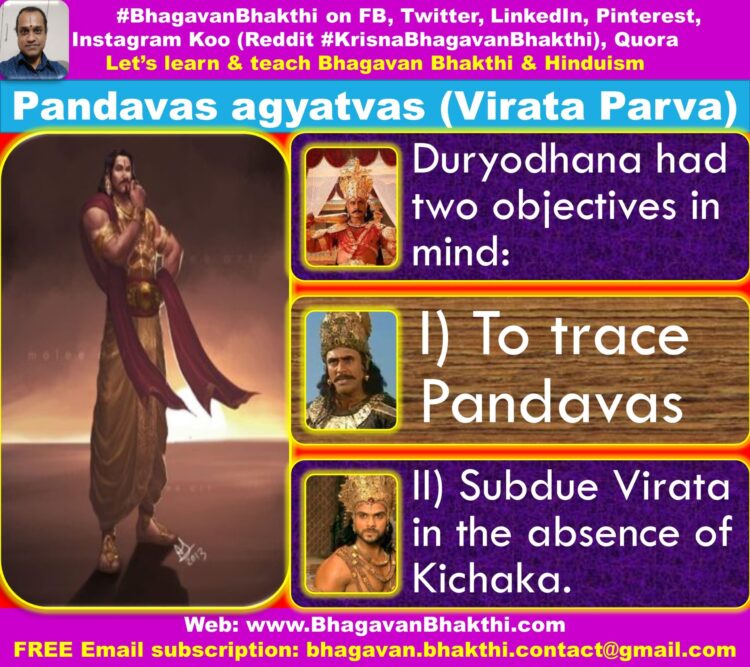 Duryodhana had two objectives in mind as given below:

I) To trace Pandavas

II) Subdue Virata in the absence of Kichaka.

On learning this attack Arjuna proceeded with Uttara Kumara.

Arjuna took his Gandiva and the flag with the emblem of Hanuman.

Arjuna won back the cows fighting with the Kaurava Maharathis (great warriors) individually and also collectively.

Arjuna employed ‘sammohana astra’ (a type of weapon) and made Kauravas unconscious.

To know more about different “Weapons used during Mahabharata Ramayana”, you can visit this link:

Let’s continue with our original story: 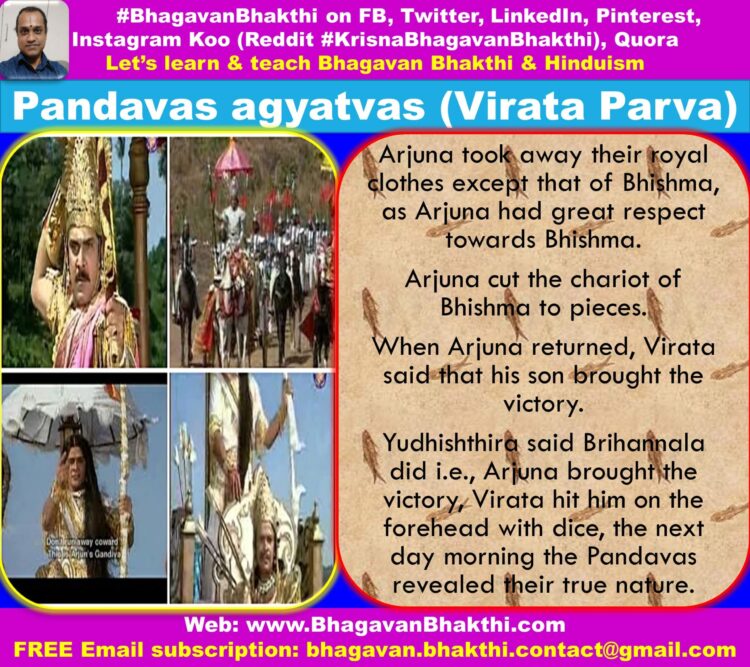 Arjuna took away their royal clothes except that of Bhishma, as Arjuna had great respect towards Bhishma.

Arjuna cut the chariot of Bhishma to pieces. When Arjuna returned, Virata said that his son brought the victory.

Arjuna brought the victory, Virata hit him on the forehead with dice, the next day morning the Pandavas revealed their true nature.

Virata requested Yudhishthira to sit on the throne and honored all of them.

However, Arjuna said he would accept her for his son Abhimanyu.

Abhimanyu’s marriage was performed with all pomp.

Duryodhana returned to Hastinapur and argued with Bhishma and Drona that:

Since Arjuna was traced before the completion of agyatvas, Pandavas should undergo Vanavasa (forest exile) again for twelve more years.

Bhishma and Drona did not agree. 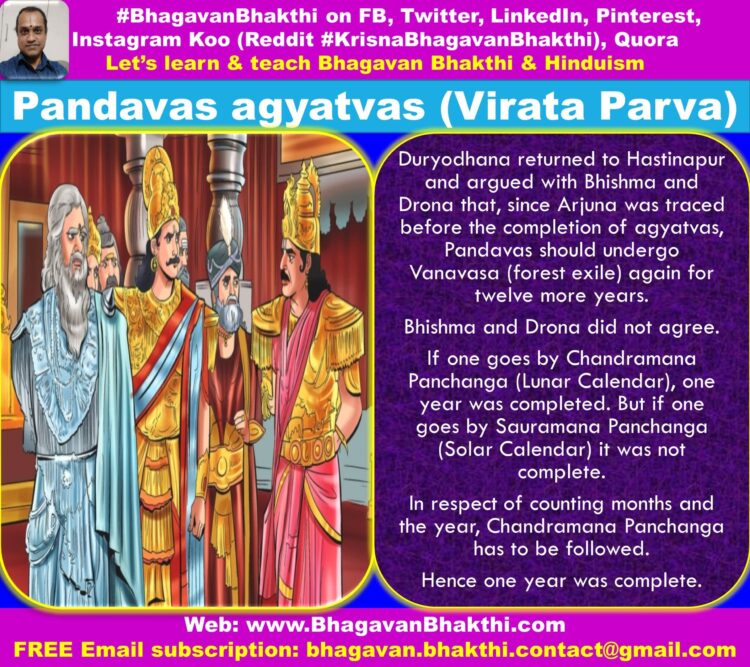 If one goes by Chandramana Panchanga (Lunar Calendar), one year was completed.

But if one goes by Sauramana Panchanga (Solar Calendar) it was not complete.

In respect of counting months and the year, Chandramana Panchanga has to be followed.

Hence one year was complete.

However, Duryodhana insisted that one year was not complete and refused to return the portion of the kingdom to Pandavas.

To know about “unknown facts about Pandavas“, please click the below link: