Namaste friends, how are you doing today? Lord Shiva blessings to you and your family!

Shiva was once sitting on Mount Mandara. Parvati came up from behind, so that Shiva could not see her, and covered Shiva’s eyes with her two hands.

Shiva could not see and everything seemed to be dark to him. Parvati’s hands sweated from the exertion and the sweat fell down on the ground.

From this sweat, a dark and fierce creature was born and started to roar.

Parvati, said Shiva, What are you up to? First, you cover up my eyes so that I can’t see. Next, you roar so as to frighten me. 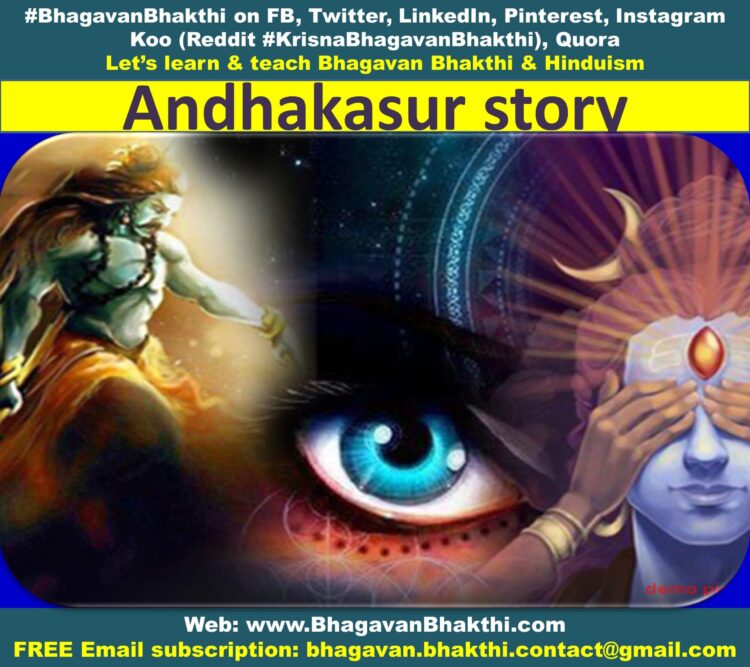 Not I, replied Parvati. See for yourself. I wonder where this creature has come from.

She removed her hands and Shiva saw the being in front of them. It is our son, said Shiva.

It was born from your sweat when you covered my eyes. Since it was born when my eyes were in darkness, let it be called Andhaka.

There was an asura named Hiranyanetra. (In Shivapurana the name is Hiranyanetra, while in other Puranas, this same asura is referred to as Hiranyaksha.)

Hiranyanetra had no sons. He therefore began to pray to Shiva so that he might have a son.

Shiva told Hiranyanetra that it was impossible for him to have a son. However, if he so desired, he could have their son Andhaka and bring him up as his own son.

Hiranyanetra gladly agreed to this.

Digresssions on Hiranyanetra and Hiranyakashipu

Hiranyanetra was very strong and powerful. He conquered the three worlds and drove the gods out of heaven. He even took the earth down to the underworld.

In desperation, the gods prayed to Vishnu for deliverance.

Vishnu adopted the form of a boar (varaha) and went down to the underworld in search of Hiranyanetra. When he found the asura, he killed him with his sudarshana chakra. He also killed several other asuras with his boar’s tusks. 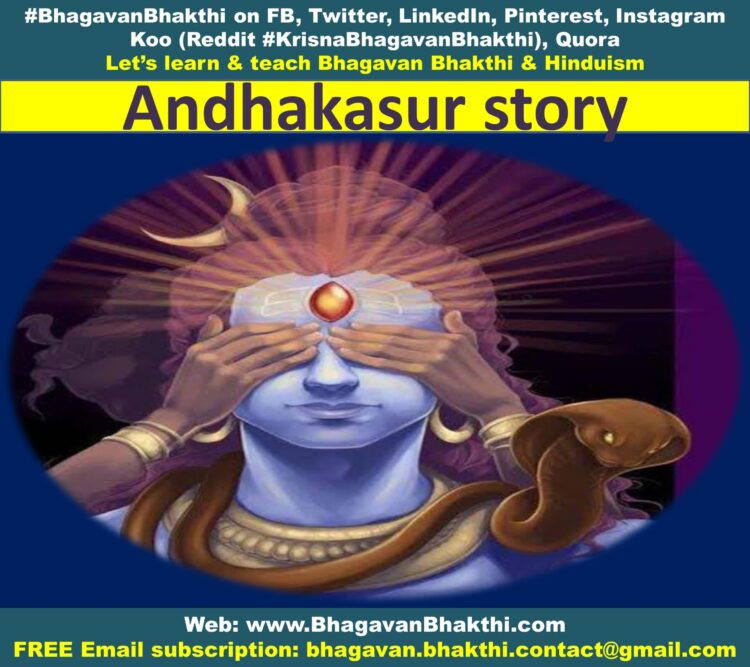 Then, he lifted up the earth with his tusks and replaced it where it should be. So far as Hiranyanetra’s kingdom was concerned, Vishnu crowned Andhaka king there.

Hiranyanetra had a brother named Hiranyakashipu. This brother prayed to Brahma and obtained a boon that made him virtually impossible to kill.

Armed with this boon, Hiranyakashipu conquered the three worlds and drove the gods out of heaven.

The gods again started to pray to Vishnu for deliverance.

Vishnu adopted the form of a lion and entered Hiranyakashipu’s captial. The lion had a huge mane and sharp teeth and claws.

The lion killed several asuras and this news was brought to Hiranyakashipu. He decided to kill the lion.

Hiranyakashipu had several sons, one of whom was named Prahlada.

Prahlada therefore tried to dissuade his father from fighting the lion. He first asked some of his soldiers to capture the lion, but they were all killed.

Hiranyakashipu then himself attacked the lion with all sorts of weapons.

But all the weapons were exhausted and the demon could do the lion no harm.

Finally, the lion grasped Hiranyakashipu and tore the asura’s heart out with its claws.

This was the Narasimha (half-man, half-lion) incarnation of Vishnu. 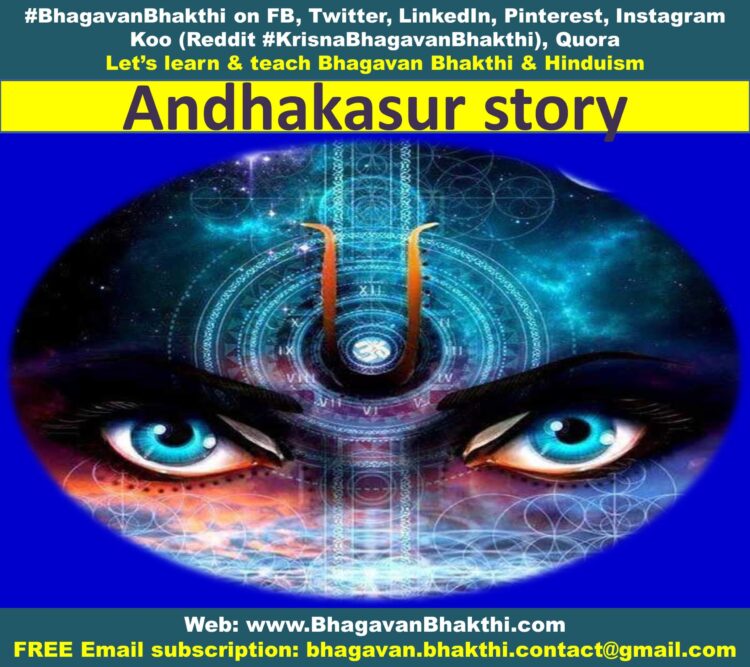 Andhaka had been crowned king in Hiranyanetra’s kingdom. Prahlada and Andhaka’s other cousins went to him and said, You are blind. What are you going to do with a kingdom? Give it to us. Our uncle made a mistake in accepting a blind son from Shiva.

Andhaka was very hurt at these nasty words. He went away to the forest and started to perform tapasya. He prayed to Brahma. For millions of years he stood on one leg, with his arms raised high, and prayed.

No one since that day has been able to duplicate Andhaka’s wonderful feat of meditation. He did not eat or drink at all. He chopped off parts of his body and offered it to the sacrificial fire.

It came to such a pass that there was no more meat of blood left in his body. It had all been offered to the fire. He was just a skeleton. It was then that Brahma appeared before him and offered a boon.

Brahma was in a fix. Earlier, many demons had asked for similar boons, but they had generally not mentioned Vishnu. So that , when the need arose, Vishnu had been able to kill them.

But here was an asura who is asking for the boon that even Vishnu would not be able to kill him. This would make him virtually immortal.

Everything that you have asked for is possible, replied Brahma. But all beings have to die. Indicate the circumstances under which you will die and the boons will be granted. 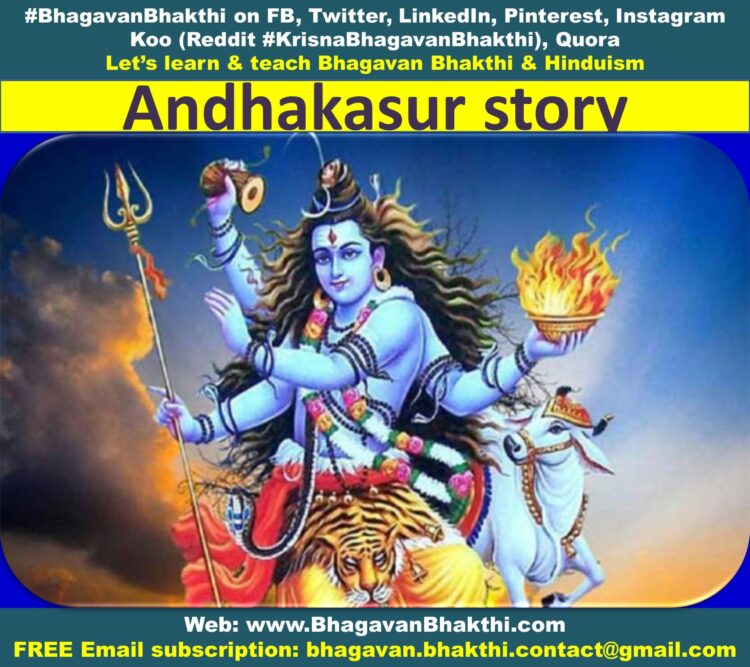 Since I have to die, said Andhaka, Let it be under the following conditions. If I ever wish to marry a beautiful woman who is like a mother unto me, let that be the hour appointed for my death.

This condition was better than nothing at all and Brahma granted Andhaka the boons. Andhaka returned to his kingdom.

When Prahala and the other cousins learnt that Andhaka had become so powerful because of the boons, they not only returned to him his kingdom, but theirs as well. Remember that Andhaka could see now.

The first thing that Andhaka did was to invade heaven. He defeated Indra and the other gods and made they pay taxes to the demons.

Next he defeated the snakes (nagas), the gandharvas, the rakshasas, the yakshas (companions of Kubera) and the humans. Thus he began to rule over all the three worlds.

For many years Andhaka ruled in this fashion. The religion of the Vedas suffered during this period, since Andhaka paid no attention to it.

Once Andhaka went to a visit to the Mount Mandara. The place was so beautiful that he made up his mind to live there. Three of Andhaka’s generals were named Duryodhana, Vighasa and hasti.

These three were exploring the environment of Mount Mandara when they came upon a cave. An ascetic was meditating inside the cave. 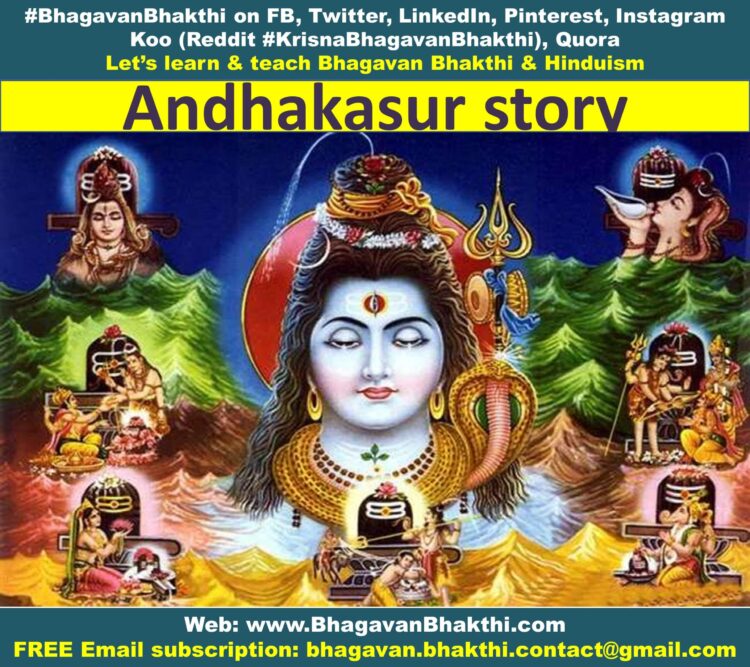 He was dressed in the skin of a tiger, wore a garland of skulls, his hair was matted and he wore a crescent moon on his forehead.

There was a beautiful woman near the ascetic. She was more beautiful than any other woman in the three worlds. The three generals concluded that this was the right wife for Andhaka.

When the generals came back to Andhaka and reported on what they had seen, the asura king said, What are you waiting for? Go to the ascestic and ask him for the woman.

Duryodhana, Vighasa and Hasti went back to the ascetic. You are only an ascetic, they said. You don’t deserve such a pretty wife.

Our master is the lord of everything and he is immensely rich. He is also handsome because of a boon received from Brahma. Give us this woman so that our master Andhaka may marry her.

Ask your master to come and take the woman himself, replied Shiva, for the ascetic, as you have already guessed, was none other than Shiva. And the beautiful woman was Parvati.

As soon as he heard this, Andhaka grasped his sword and came to fight with Shiva. The door to the cave was guarded by Nandi, and Andhaka first had to fight with him.

But Andhaka returned and again a fight raged with Nandi for five hundred years. Brahma, Vishnu, Indra and the other gods also came to help in the fight with the demons.

The general Vighasa was a very strong warrior. He opened his mouth wide and swallowed up all the gods.

So far, Shiva himself had not played any part in the fighting. But hearing what Vighasa had done, he ascended his bull and came out to fight. He killed Vighasa and rescued the gods from the asura’s stomach.

This was not helping the cause of the gods at all. Shiva’s companions (gangas) captured Shukracharya and brought him to Shiva. Shiva promptly swallowed up Shukracharya.

Soon all the demons were taken care of, with the exception of Andhaka. He continued to fight. Vishnu’s mace could do him no harm and he only laughed at Indra’s arrows.

Some of the arrows did pierce the asura’s body. But whenever drops of blood from his body onto the ground, asuras who were exactly like him in appearance were created from this blood.

As a result, the battlefield was soon populated with thousands and thousands of Andhakas.

Shiva created a goddess known as Devi from his own body. Devi was appointed the task of drinking up the blood of the asuras before it could spill onto the ground.

Thus aided by Devi, Shiva started to tackle the demons and soon there was only the original Andhaka left. Shiva flung a trident at him.

The trident struck Andhaka on the chest and the asura king fell down dead.

When the war was over, Shukracharya prayed to Shiva and was released from Shiva’s stomach. (The above story is according to Shiva Purana).

PS: It should always be noted that Bhagavan Sri Maha Vishnu is the ultimate and he has all the mighty powers to kill or defeat anybody in the unlimited universes.

But Sri Vishnu is called “Kalunaadhisha”. Thus he has to give respect to Sri Brahma Deva’s words and for this reason Sri Vishnu didn’t killed or defeated Andhakasura.