We all know that the pandavas left their kingdom for 13 long years for keeping up their word!

Well, for Arjuna going away from the bhogas of a king, for the sake of truth, was not new. He did it once well before the aranyavaas. The story goes like this:

The kalyaanam (marriage) of pandavas with Draupadi Devi was an unusual one as per the ordinary men are concerned. However, it was perfectly according to Dharma Shastras.

In fact Draupadi Devi is one of the greatest pativratas and praised even by Bhagavan Krishna for her Dharma vartana. 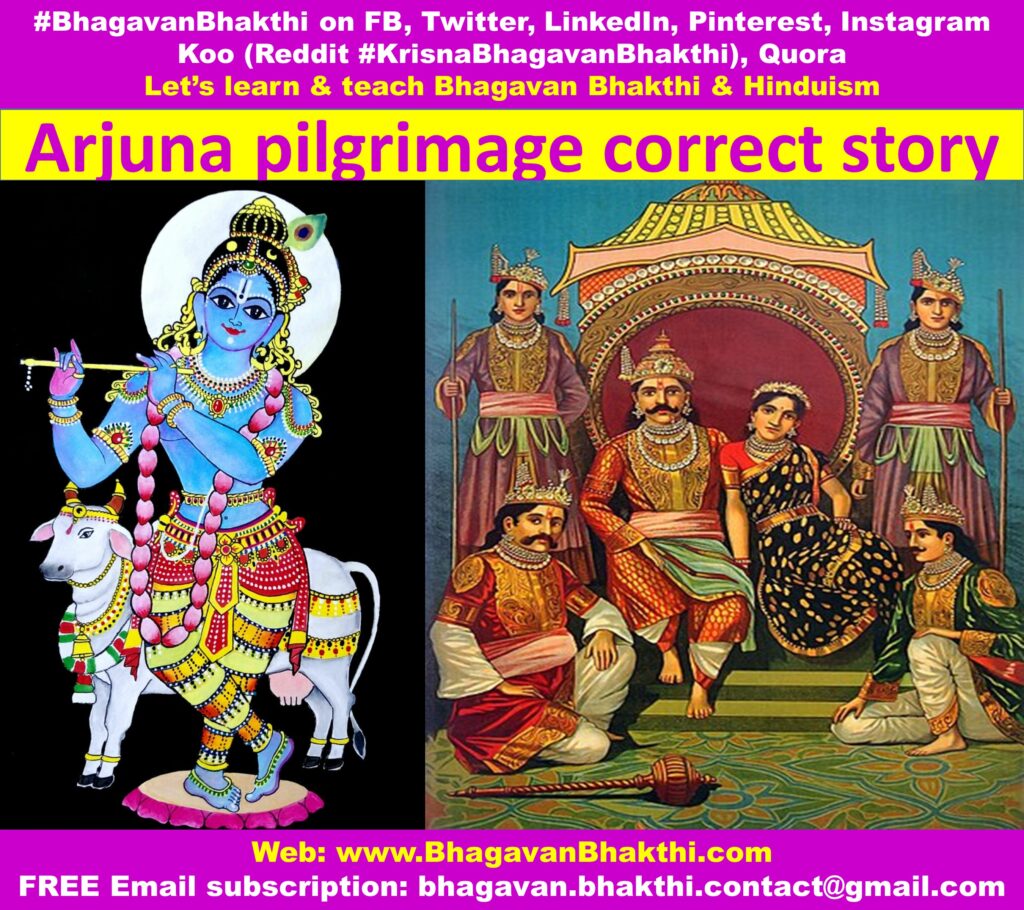 A few reasons to justify the kalyanam (marriage):

1. Kunti Devi, the mother of pandavas, who never knew what a lie was, gave her will.

2. Sri VedaVyaasa Maharshi, one of the avatar of Bhagavan Vishnu, ordered the kalyanam to be done.

3. Lord Shiva, pleased with her tapas, gave a boon to Draupadi Devi to marry the Pandavas.

4. Pandavas, though were five physically, were all amshas of avatar of Yamadharma, Vaayu Deva, Indra Deva, Ashvini Kumaras.

6. Narada Maharshi, suggested some rules to be followed by Pandavas and Draupadi for living together.

This is because, though they were avatars of Gods and Goddesses, since they had a human form some addition rules according to dharma shastras needed to be followed.

One of the rules was that: Draupadi Devi should spend one year with each of the Pandavas and while she was with one of them, no other Pandavas should visit the palace where they might be.

In case of any breach of their rule, one-year pilgrimage was prescribed by way of penance leaving the kingdom.

The Pandavas and Draupadi Devi were living happily until one day: a Brahmana came running to Arjuna saying that the thieves had stolen his cows.

Arjuna wanted to rush with him to catch the thieves but he realised that his bow and arrows were kept in Yudhisthira’s palace and he was there in the company of Draupadi Devi.

He hesitated for a while, then seeing Brahmana’s plight he rushed in to Yudhisthira ‘s palace took his bow and arrows and ran to catch the thieves.

After he caught the thieves and punished them, after restoring the cows of the Brahmana, Arjuna came back to Yudhisthira and told him about his transgression of the rule.

Yudhisthira, knowing the reason of the breach of their rule, said there is no need for Arjuna to take the pilgrimage.

Since it is a mistake committed towards him, and that too for a good reason, he will pardon Arjuna.

However, Arjuna would never break his word. He immediately set out for a one-year pilgrimage.

May be because of this reason, Arjuna is such a favorite sakha / friend of Bhagavan Sri Krishna.

The Mahabharata, an ancient and vast Sanskrit poem, is a remarkable collection of epics, legends, romances, theology, and ethical and metaphysical doctrine.

The core of this great work is the epic struggle between five heroic brothers, the Pandavas, and their one hundred contentious cousins for rule of the land.

The Mahabharata, Volume 1: Book 1: The Book of the Beginning.

Click below link for more information (For US/UK/Canada/Germany visitors):

Click below link for more information (For Indian visitors):