Which flowers Lord Shiva does not accept

Rishi Romaharshana while reciting the Shiva Purana told the assembled Rishis / sages, “It is very easy to please Lord Shiva. But Lord Shiva must never be worshipped with a ketaki or a champaka flower”.

“Why, what is wrong with these flowers?” asked the assembled Rishis / sages. 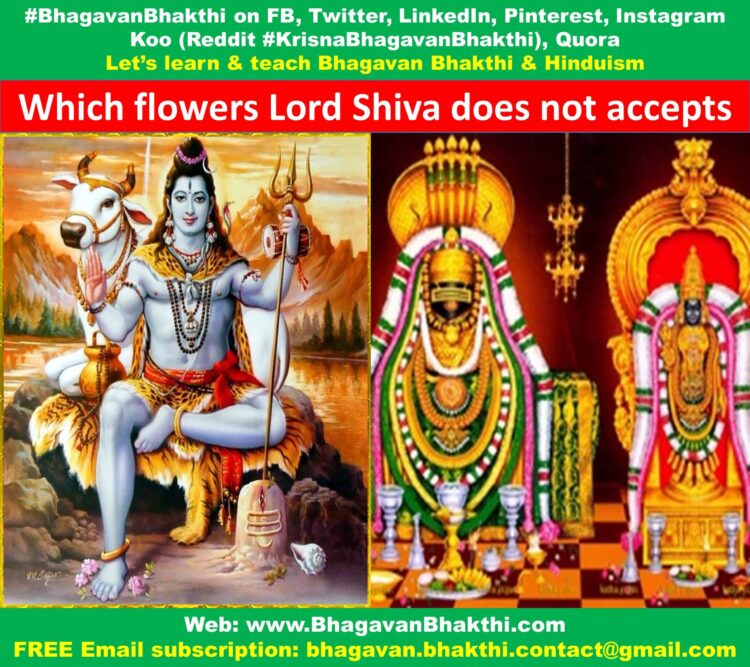 News reached the forest that Dasharatha had died in their absence and a shraaddha (funeral ceremony) had to performed for the dead Raja / king.

Bhagavan Sri Rama sent Lakshmana to a nearby village to get the necessary ingredients.

Time passed and Lakshmana did not return.

Bhagavan Sri Rama himself then went to get the ingredients and also looked for Lakshmana.

But Bhagavan Sri Rama too did not return.

It was almost noon and the ceremony had to be performed before noon.

In desperation, Sri Sita Devi decided to perform the ceremony by herself.

Sri Sita Devi went and bathed in the Phalgu river and lit an earthen lamp.

Sri Sita Devi then made the offerings (pinda) to the dead ancestors by herself.

Immediately, a voice was heard. “Sita, you are blessed”, it said. “We are satisfied.”

In utter amazement Sri Sita Devi watched some disembodied hands appear in the air to accept the offerings.

“Who are you?” Asked Sri Sita Devi.

“I am your dead father-in-law”, answered the voice. “The funeral ceremony has been successful. I have accepted your offerings.”

“But will Rama and Lakshmana are going to believe me”, said Sita. “They will never believe that such disembodied hands appeared out of thin air to accept the offerings.”

“They have to”, answered the voice. “You have four witnesses. The first is the Phalgu river. The second is the cow over there. The third will be the fire. And the last one will be the ketaki bush.”

Bhagavan Sri Rama and Lakshmana returned and said, “Cook the food quickly. There is very little time left. We have to complete the shraaddha / funeral ceremony before noon”. 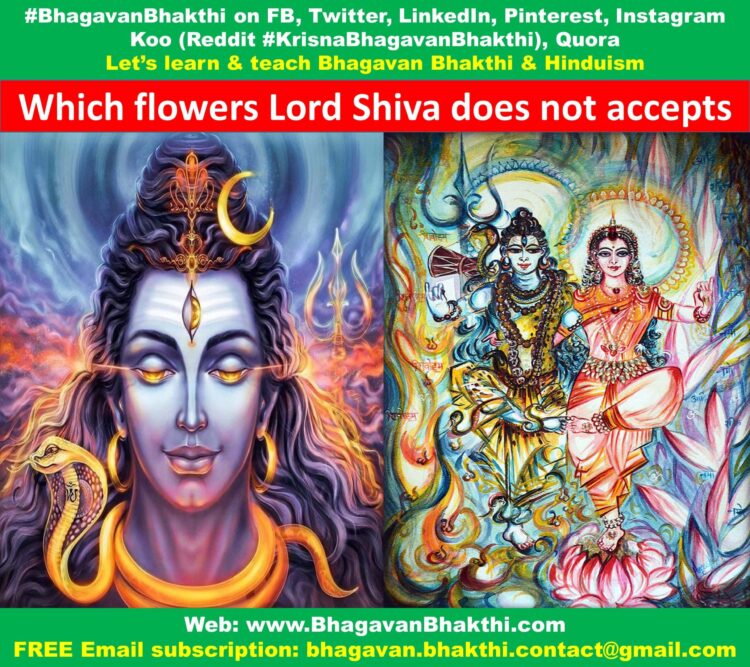 Sri Sita Devi told them what happened, and naturally, the two brothers did not believe her.

Thus, Sri Sita Devi called upon her four witnesses, but each denied that it had seen anything.

Without arguing any further, the Great Sri Sita Devi cooked the food and Bhagavan Sri Rama made offerings to his pitrus / ancestors.

A voice was then heard from the sky. “Why are you calling us again?” it said. “Sita has already satisfied us.”

“I refuse to believe that”, said Bhagavan Sri Rama.

Surya Deva (sun god) confirmed that everything had happened just as Sri Sita Devi had said.

Bhagavan Sri Rama and Lakshmana were ashamed that they had doubted Sita and were also impressed with the power of her virtue. But Sri Sita Devi cursed the four false witnesses.

(We have to always remember that Sri Rama is svayam Bhagavan and Lakshmana is svayam Sri Adi Shesha Naaga and there’s nothing which can make these two ashamed of.)

(But both are so great that, both are showing to the ordinary people on how to react when something goes wrong from our end).

Sri Sita Devi cursed the Phalgu river that it would henceforth only flow underground.

Sri Sita Devi cursed the ketaki flower (pandanus odoratissimus) that it would never be accepted by Lord Shiva as an offering.

Sri Sita Devi cursed the cow that its mouth would henceforth become impure. It had, after all, lied with its mouth. The hind sections of the cow would however continue to be pure.

And finally Sri Sita Devi cursed the fire that it would consume everything indiscriminately.

That is the reason why a ketaki flower must never be used to worship Lord Shiva. 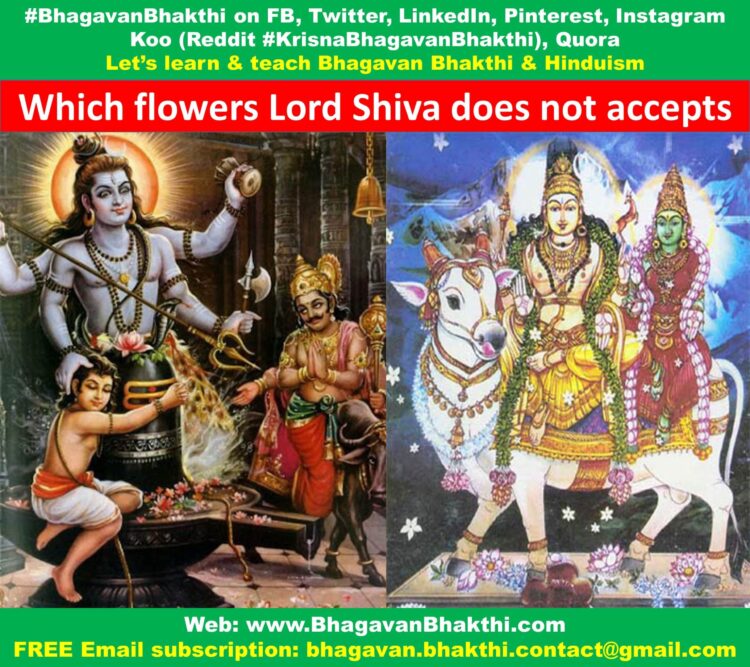 Nor must a champaka flower be used for Lord Shiva pooja / worship.

In the land of Gokarna there was a temple dedicated to Lord Shiva.

Devarshi Narada decided that he would go and visit the temple.

On the way, Devarshi saw a flowering champaka tree and stopped to admire it.

A brahmana came there to pluck flowers from the tree.

But seeing that Devarshi Narada was there, the brahmana refrained from plucking any flowers.

“Where are you going?” asked Devarshi Narada.

The brahmana lied and replied, “To beg some alms.”

Devarshi Narada went to the temple.

Meanwhile, the brahmana plucked flowers from the champaka tree and placed them in a basket that he covered up well.

Devarshi Narada met the brahmana again on his way back from the temple.

“Where are you going now?” Devarshi Narada asked the brahmana.

The brahmana lied again, “Home”, he said, “I couldn’t get any alms.”

Devarshi Narada went to the champaka tree and asked, “Has that brahmana plucked any flowers?

“Which brahmana?” replied the tree. “I don’t know of any brahmana. No one has plucked any flowers.”

Devarshi Narada went back to the temple and discovered fresh champaka flowers lying there on top of the Lord Shiva Linga.

There was another bhakta / devotee praying there.

Devarshi Narada asked him, “Do you know who came to worship with these champaka flowers?”

“Yes, I do”, replied the bhakta / devotee, “It is an evil brahmana. He worships Lord Shiva every day with champaka flowers.”

“Thanks to Lord Shiva’s blessings, he has completely brainwashed the king and has secretly been stealing the king’s wealth. He also oppresses other brahmanas.”

Devarshi Narada asked Lord Shiva, “Why do you encourage such evil?”

“I am helpless”, replied Shiva. “I cannot resist it if someone worships me with champaka flowers.”

Just then, a brahmana woman came running with her tale of woe. Her husband was crippled.

But they had managed to get some money from the king, so that their daughter could be married. They had also received a cow from the king.

But the evil brahmana was claiming that half of whatever they had received was his. It was due to his good offices that the king had been so generous, he was saying.

The evil brahmana had already appropriated half of the money.

But how was a cow to be divided?

Devarshi Narada then decided that something needed to be done about the champaka tree and the evil brahmana.

Apart from everything else, the champaka tree was a liar.

Devarshi Narada cursed the champaka tree that its flowers would never be accepted by Lord Shiva as an offering.

Devarshi Narada cursed the evil brahmana that he would be born as a rakshasa (demon) named Viradha. But the brahmana had been a devotee of Lord Shiva.

So the curse was qualified by the stipulation that Viradha would be killed by Bhagavan Sri Rama and would then again become a brahmana.