What is Lord Ganesh birth story

Namaste friends, how are you doing today? Bhagavan Sri Vishnu, Lord Shiva, Sri Parvati Devi and Lord Ganesha blessings to you and your family!

Lord Ganesha born as the son of Sri Parvati Devi

As per Skanda Purana (it is considered as a ‘Tamasa Purana’), Sri Parvati got Lord Ganesha out of her body’s mud. But here we should understand the correct and real meaning of this story and we must not take the story as it is, as it gives a wrong image of Sri Parvati Devi.

As per Skanda Purana, when Sri Parvati Devi made the rachana / creation of Lord Ganesha out of her body’s clay, does it mean that she had lot of clay / mud on her body? 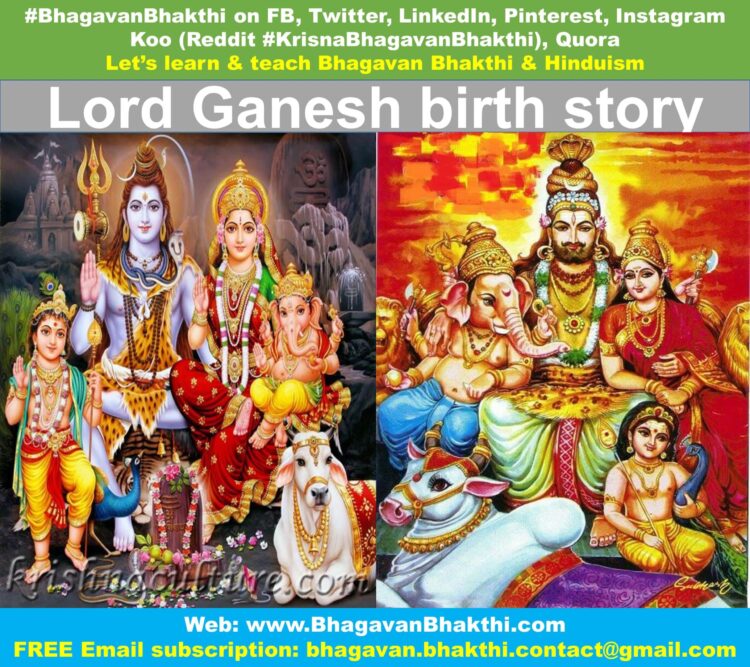 How that much of clay / mud can come to her body?

These are the few questions which appears mind in the mind of today’s liberals.

Let us go little back:

When Sri Parvati Devi was born as “Sri Sati Devi”, that is, the daughter of Daksha Prajapati (thus Sri Sati Devi is also called as Dakshayani), she had created agni / fire out of her body and entered fire. So this means her body was full of agni / fire.

Similarly, Sri Parvati Devi took out small portion of ‘Pruthvi amsha’, that is clay / mud out of her body.

A Woman without the support and anugraha of her partner / Purusha, cannot produce a child and such things are not found anywhere.

We must understand that Sri Parvati Devi created Lord Ganesha only out of the grace, that is, anugraha / blessings and support of her husband Lord Shiva, but not on her own power. 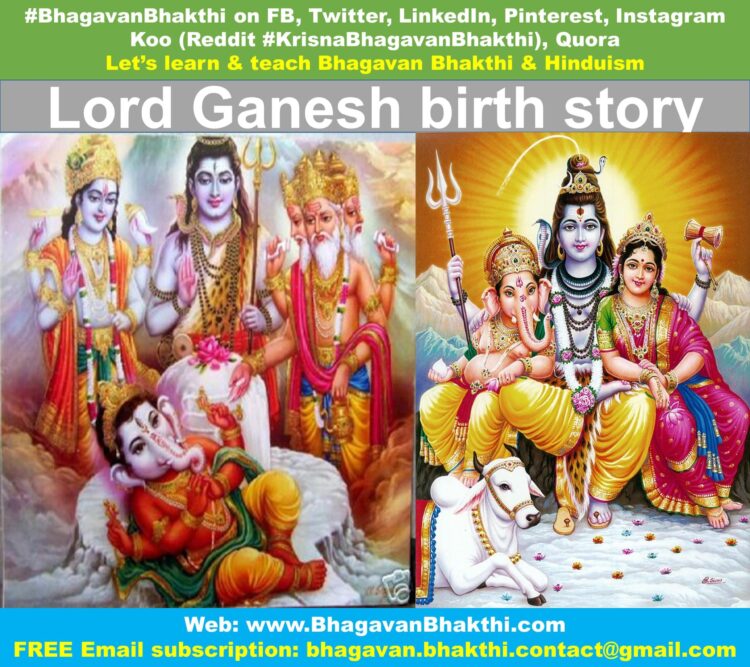 As per Brahma Vaivartha Purana (it is considerd as a ‘Raajasa Purana’).

As per this Purana, Sri Parvati Devi was wanting to have putra / son.

Once when both Lord Shiva and Sri Parvati Devi were in the intimate position, few Rishis / sages came to meet the couple and wished to get bhiksha from them.

Because of this, Sri Parvati Devi left Lord Shiva in the middle of their intimacy, so that she can arrange for the bhiksha.

Thus, in the meantime the veerya of Lord Shiva which had to be deposited inside Sri Parvati Devi fell on the ground.

With this veerya, a handsome and beautiful putra / son was born to Lord Shiva and Sri Parvati Devi.

The same putra / son was none other than Lord Ganesha.

Thus we should familiarize that, Lord Ganesha was born with the anugraha / blessings of Lord Shiva himself.

NOTE: We should note that both the Puranas were written by Bhagavan Sri Veda Vyasa Ji (He is an avatar of Bhagavan Sri Maha Vishnu). The difference is because, Skanda Purana story is a ‘Tamasa story’.

This is a ‘mohakaprada katha’, that is, to produce hallucination in the asura / demonic type of people, this Skanda Purana’s story was written by Bhagavan Sri Veda Vyasa Ji. 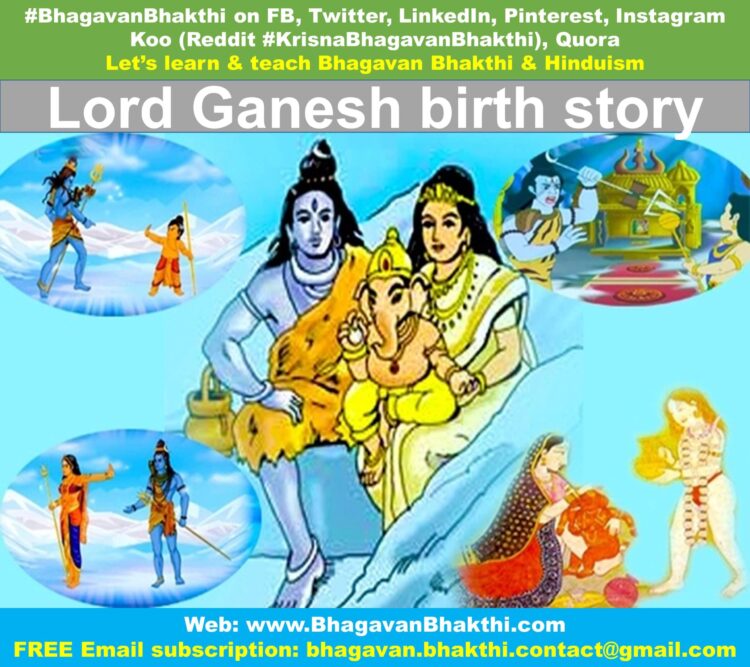 How did Lord Ganesha got the head of an elephant

Here also there are two versions of the story.

This is very famous story and most of you must be aware of:

At that very moment Lord Shiva who was thirsty comes to house where Lord Ganesha was safeguarding the gate of the house.

After lots of discussions, Lord Shiva looses his temper and out of anger, removes the head of Lord Ganesha.

Thus, after Sri Parvati Devi comes out and she sees the dead body of her beloved son and begged Lord Shiva to give life to him immediately.

Lord Shiva in turn, then realizes that Lord Ganesha was his own son, and orders his ganas / servants to bring the head of anyone who is lying with the head towards north direction.

The ganas / servants saw no one sleeping with head towards North and at the end found an elephant sleeping towards north direction.

Thus those ganas / servants cut off the head of that elephant and gives it to Lord Shiva.

Soon Lord Shiva places the elephant head on the body of Lord Ganesha and brings back to Lord Ganesha to life again.

This is the story which many of you know. Usually, you would have seen on the television and movies. 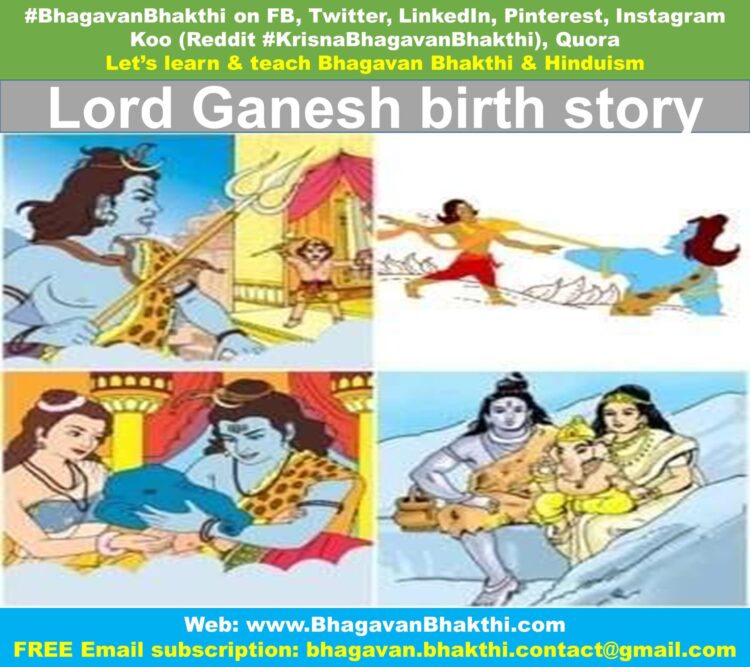 Now, what does the Brahma Vaivartha Purana say about the Lord Ganesha’s elephant head

As per the Brahma Vaivartha Purana, the story of completely different:

As per the Brahma Vaivartha Purana, Lord Ganesha was very beautiful and handsome child.

All the Devatas / Demigods, Rishis wanted to have his a darshana (a glimpse) of Lord Ganesha.

Everybody came to Lord Shiva home land, that is, Mount Kailasa to have a darshana (a glimpse) of Lord Ganesha and were praising the Lord Ganesha.

Sri Parvati Devi was very much happy as she had given birth to a beautiful and handsome son.

Sri Parvati Devi realizing this, asked Sri Shani Deva to come inside and have the darshana (a glimpse) of Lord Ganesha.

Lord Shani Deva told Sri Parvati Devi, that, he is having a curse from his wife that, if he sees anybody directly his head would be cut off.

(The story of this is that, once Sri Shani Deva was doing Dhyana / meditating of Bhagavan Sri Vishnu. At that time very time his wife, the daughter of Chitraratha, came in front of him.)

This was the story of Sri Shani Deva and his wife Chitraratha.

One the other hand, Sri Parvati Devi compels Sri Shani Devi to have a darshana (a glimpse) of her son Lord Ganesha.

As soon as Lord Shani sees Lord Ganesha directly, Lord Ganesha’s head gets cuts off from his body.

Thus, Sri Parvati Devi now repents for having forced Sri Shani Deva to see his beautiful and handsome putra / son and she starts to cry.

This is the original story as per the Brahma Vaivartha Purana, on how Lord Ganesha looses his head.

The great Vaishnava saint who is the avatar of Sri Vayu Deva, that is, Sri Madhvacharya Ji in his ‘Maandookopanishat Bhashya’ has given explanation about how Lord Ganesha got the elephant’s head.

As per Sri Madhvacharya Ji, Lord Ganesha is the aradhaka (worshipper) of Bhagavan Vishva and Taijasa roopas / forms of Bhagavan Sri Maha Vishnu.

Both (that is, Vishva and Taijasa forms) are Jagrat and Svapnavasta niyamaka roopas / forms – i.e., Vishvambhara roopa. (Same roopa which Bhagavan Sri Krishna shows to Arjuna during the Bhagavad Gita pravachana).

This form of Bhagavan Sri Maha Vishnu has 19 heads in total.

The Central head is of Gajamukha (Gajamukha – Gaja = elephant, mukha = head), whereas the other 18 faces are human faces.

(We should always remember that, what we think in our mind, so will Bhagavan Sri Maha Vishnu will give us the blessings as per our mindful thought.)

Bhagavan Sri Maha Vishnu went and removed the head of an elephant which was sleeping it’s head facing towards North. 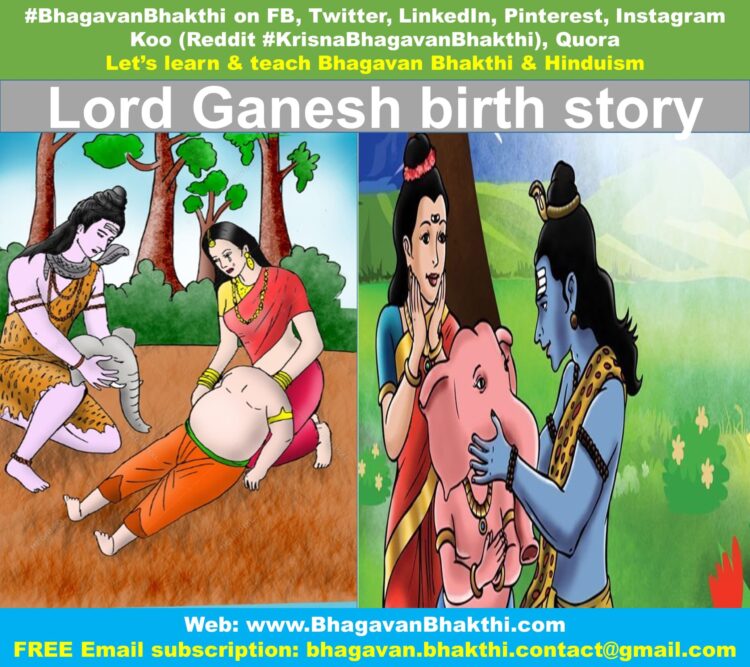 Now naturally we will get a question in our mind that “Why Bhagavan Sri Maha Vishnu brought the head of an elephant and placed it on Lord Ganesha and not of any other animal or humans:

Now let us get the clarification on this as per the Brahma Vaivartha Purana:

Sri Indra Deva in turn put it on the head of an elephant, but this elephant threw it and touched with its legs.

After Samudra Mathana (churning of ocean) and after getting ‘Amruta’ (ambrosia), Sri Indra Deva got back his power.

Thus, that elephant had to be punished.

Bhagavan Sri Maha Vishnu removed the head of that particular elephant as a punishment and attached it to Lord Ganesha.

This is the original story as per the Brahma Vaivartha Purana.

(We should always keep in mind that, Bhagavan Sri Maha Vishnu will always be keeping a watch on everyone.)

Vignesha – He is the one who is the pariharaka / remover of obstacles.

Ganesha – He is the head of all the Ganas including Nandi and Bhrungi.

Heramba – He fought with Lord Shiva.

Gajanana – He has the head of an elephant (also known as Gajamukha).

Shoorpakarana – He has broad ears.

Vinayaka – He is always immersed in the dhyana / meditation of Bhagavan Sri Maha Vishnu.

Ekadanta – He has one tusk.