Starting from Bhagavan Sri Vishnu, all the Devatas (Demigods) also have their own weapons.

These weapons are mostly used to slay and destroy the demons who are against the Dharma and want to spread the Adharma.

In Ramayana, Mahabharata, Bhagavata Purana and many other Hindu scripts give explanation about these divine weapons used by Hindu Gods and Goddesses. 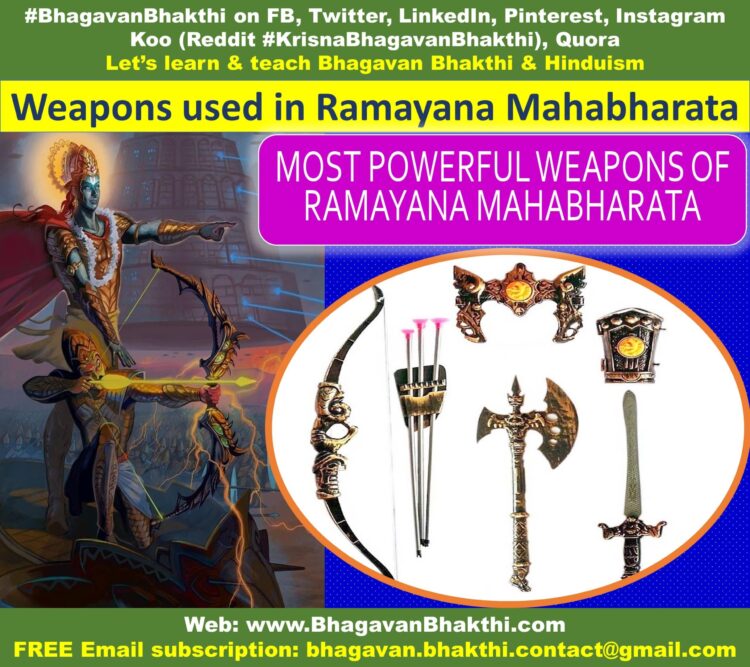 List of weapons used in Mahabharata (Ramayana) are as given below:

32. Vishoshanastra: Used to heal a wound

Now, we will look into more information about the above weapons:

Suryastra or Bhaskarastra is mainly used to clear the darkness and also to end the maya / illusions. 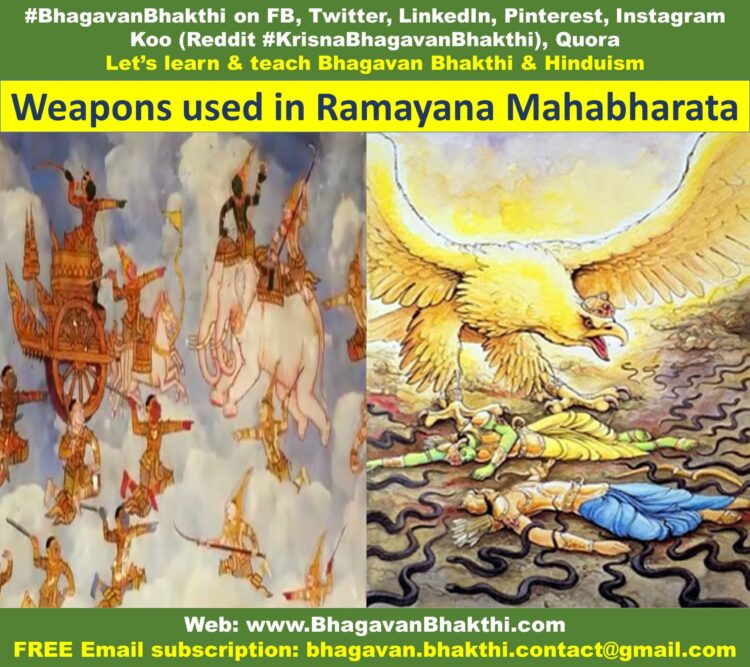 3. Nagastra: These belong to a group of Devatas who are from the Naga vamsha (serpent family) Naga Devata is the main abhimani Devata (controlling Demigod) of this astra / weapon.

This astra / weapon is mainly used to tying up the enemy and to nullify the enemy’s power.

Bhargavastra has the capability to release unlimited number of arrows and other astras / weapons in a given single time.

Bhagavan Sri Prashurama has given this astra / weapon to few of his shishyas / students.

5. Agneyastra: Sri Agni Deva is the main abhimani Devata for this astra / weapon. 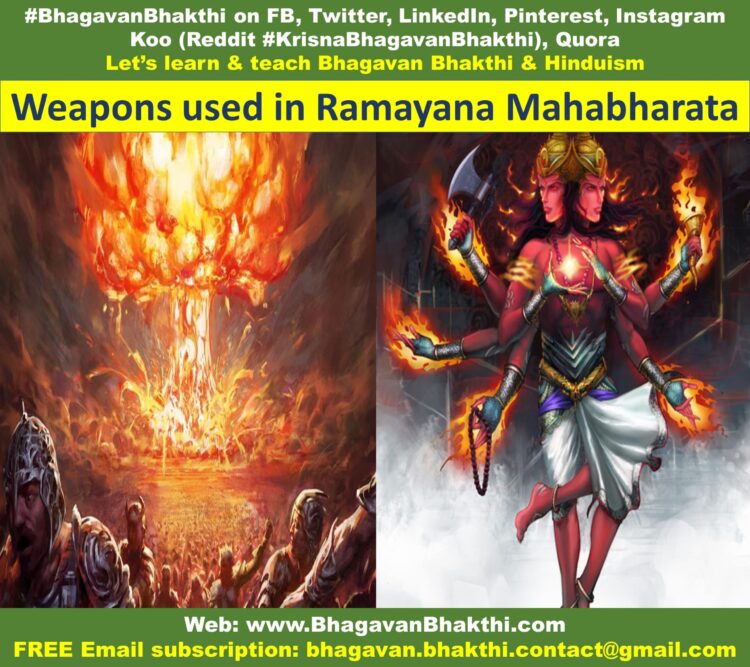 This astra / weapon can emit inextinguishable fiery flames and has the capability of burning the entire troupe of the enemy.

This astra  / weapon’s job is to increase the speed of the wind (Vayu) enormously and to cause huge destructive to the enemies.

This astra / weapon is also used to stop heavy rain (to decrease the Varunastra’s working capability) by blowing heavy wind and to scatter the clouds.

7. Bhaumyastra: This is connected with the earth (Here Bhaumya means ‘related to Bhumi’ / related to earth).

Bhaumyastra is usually used to dig soil (like tunnels).

This may continue until the enemies use even more powerful astra / weapon to counter this sammohanastra. Prajnastra is the counter astra / weapon for this.

The main job of this astra / weapon is to release unlimited number of highly powerful animals / beasts.

These animals / beasts are really capable of destroying almost anything on this earth.

Aindrastra adds a huge shower of flames of arrows to go and attack the opponent.

Thus causing a great amount of destruction to the enemies.

Usually used to give punishment to sinners at Yamaloka.

12. Pramohanastra: The main abhimani Devata (controlling Demigod) is not known.

13. Gandharvastra: The main abhimani Devata (controlling Demigod) of this astra / weapons are Gandharvas.

Gandharvas are the Devatagans who are related to singing and music.

Also, these Gandharvas are masters in maya / illusion using their singing and music capabilities.

When this astra / weapon is enabled, it creates a huge confusion / illusion among the enemies.

The confusion / illusion that is created by enabling this astra / weapon is highly difficult to counter attack. 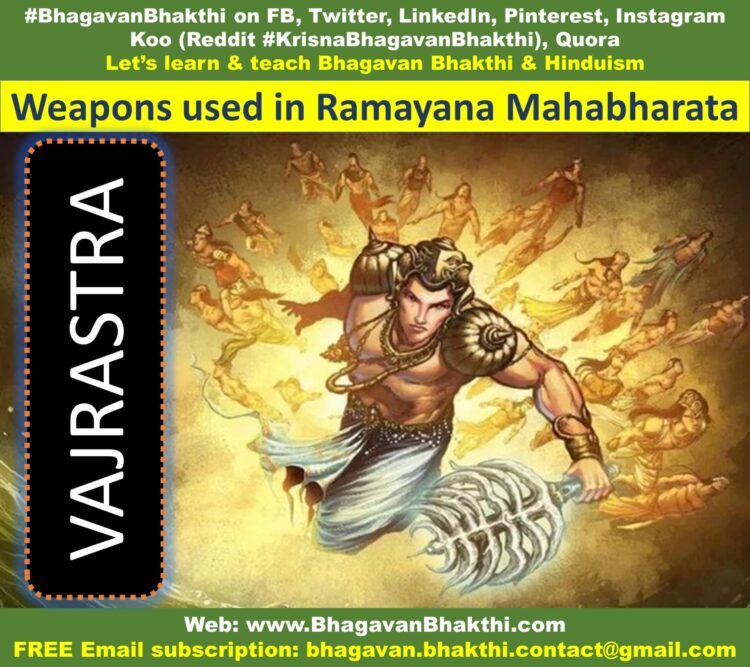 This astra / weapon was built using the backbone / spinal cord of the great Rushi Dadhichi.

This astra / weapon can strike the enemy with powerful bolts of lightning.

This astra / weapon is one of the most destructive weapon mentioned in both Ramayana and Mahabharata.

17. Vasavi Shakti: This is the spear of Sri Indra Deva. When this is used as a hurling astra / weapon, it immediately strikes the shatrus / enemies and kills them immediately.

Same astra / weapon was used by Karna to kill the Bhimasena’s monster son Ghatotkacha in Mahabharata.

Same astra / weapon was used by Indrajita (Meghanatha – son of Ravana) against Lakshmana.

But since, the Great Sri Vayu Deva’s son Sri Hanuman immediately brought the sanjeevini and thus the life of the Bhagavan Sri Rama’s brother Lakshmana was saved.

As soon as this astra / weapon is enabled, a fiery chakra / discus appears in the akaasha/ sky.

This same astra / weapon was used by Ashvattama (he is an avatar of Lord Shiva) against the Pandavas in the great war of Mahabharata (Kurukshetra war).

This astra / weapon is one of the powerful weapons of Sri Chatur Mukha Brahma Deva.

This astra / weapon manifests from the head (in Sanskrit it is called as ‘shira’) of Sri Brahma Deva.

That place will get destroyed completely and no plants or trees or even grass can be grown in that particular huge amount of area for 12 Brahma years.

Using this same Parjanya (related to rain and water) astra / weapon, Arjuna hit the ground to make a huge crater on the land when Bhishma was sleeping on the Sharashayya (bed of arrows) to quench Bhisma’s thirst.

During the war against Banasura, Bhagavan Sri Krishna used this astra / weapon.

To make someone to fall asleep or to make unconscious this astra / weapon is used. 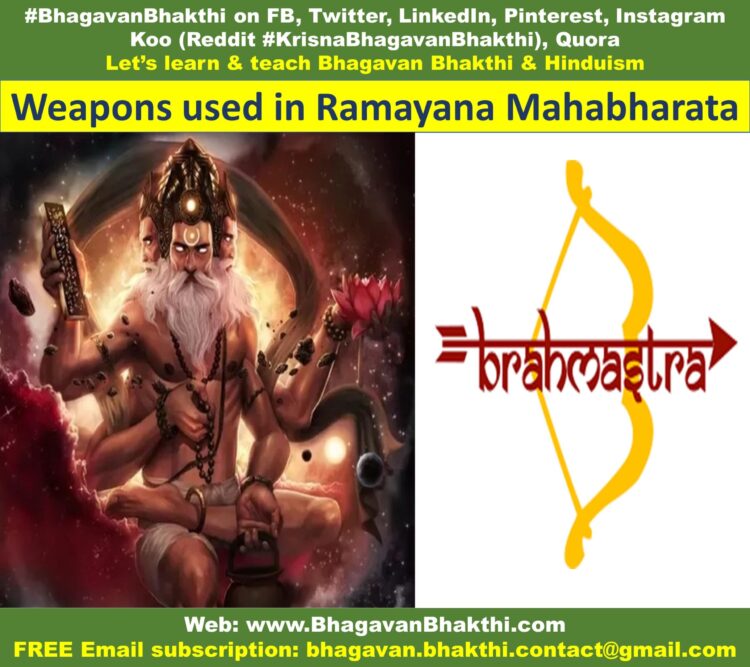 Just with this one arrow, unlimited number of arrows appear and will cause a huge destruction in large scale and also this same astra / weapon is capable of countering most of the other astras / weapons.

Same Mahendrastra was used by Arjuna who was attached by 13 Maharathis (this included Bhishma, Drona, Kripacharya, Salya, Bhurishrava and others) in the great Mahabharata war.

The main work of this astra / weapon is bring back to consciousness who were under the attack of Sammohanastra and Pramohanastra.

28. Antardhamastra: This astra / weapons belongs to the Devata (Demigod) of wealth Kubera.

Antardhana = Antar + dhana = from inside + disappear. This astra / weapon is mainly used to disappear suddenly.

This is a ‘Noose’ of Sri Varuna Deva and is capable of tying anything including humans, Demigods, Rakshasas, Gandharvas, yakshas, etc in an inescapable hold.

This astra / weapon creates a maya / illusion and causes the user to suddenly appear at multiple spots at the same time.

This indeed confuses the enemy and his troops.

Indrajala = Indra + jala = Indra’s maya (magic). Anyone who comes under the clutches of this astra / weapon will be very difficult to get out of the maya / magic.

32. Vishoshanastra: The main work of this astra / weapon is to heal any wound and / or make it dry.