Namaste friends, how are you doing today? Lord Shiva blessings to you and your family!

Dear friends, let us now learn various information related to Lord Shiva one by one:

There are various historical and puranic references are present to the worship of Lord Shiva. We can find several divine personalities having worshiped Lord Shiva on different occasions for various reasons.

Bhagavan Sri Maha Vishnu in his various avatars also worshiped Lord Shiva for Loka Kalyana (welfare of the ordinary people), Loka reetya (to teach how and why to worship Lord Shiva). 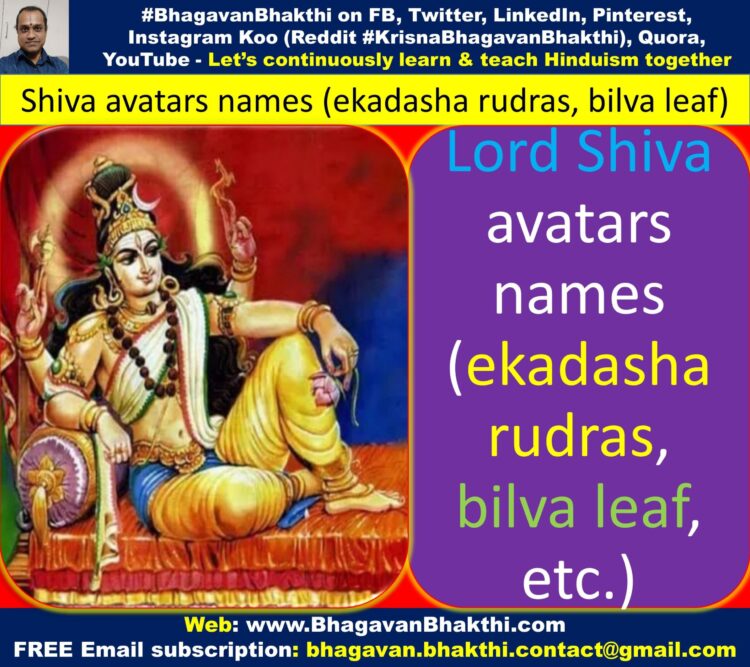 Now let us know the more and very important information about Lord Shiva as per our Hindu Sanatana Dharma.

First of all, let us know:

Who is Lord Shiva?

Lord Shiva was born as the son of Sri Brahma Deva.

The present Sri Brahma Deva’s name is called as Virinchi.

Lord Shiva instantly emerged out (Sadhyojatha) from center of Sri Brahma Deva’s eyebrows at the time of rachana / creation.

Lord Shiva is entrusted with the role of ‘Layakaraka’ / destruction by Bhagavan Sri Maha Vishnu.

Lord Shiva means ‘mangalakara’ (auspicious), shubha (highly good), one who is incredibly and ever auspicious and thus Lord Shiva’s another name is Sadashiva. Sadashiva means pure, sacred and selfless.

Lord Shiva is called ‘Shambhuh’, because he is full of bliss (Satyam-Shivam-Sundaram). This means, someone who bestows peace, prosperity and happiness.

As Maha Rudra, Lord Shiva is the eliminator of all agonies and sorrows.

In Vishnu Sahasranama Stotram, we can find Bhagavan Sri Maha Vishnu eulogized as Shiva and Rudra. 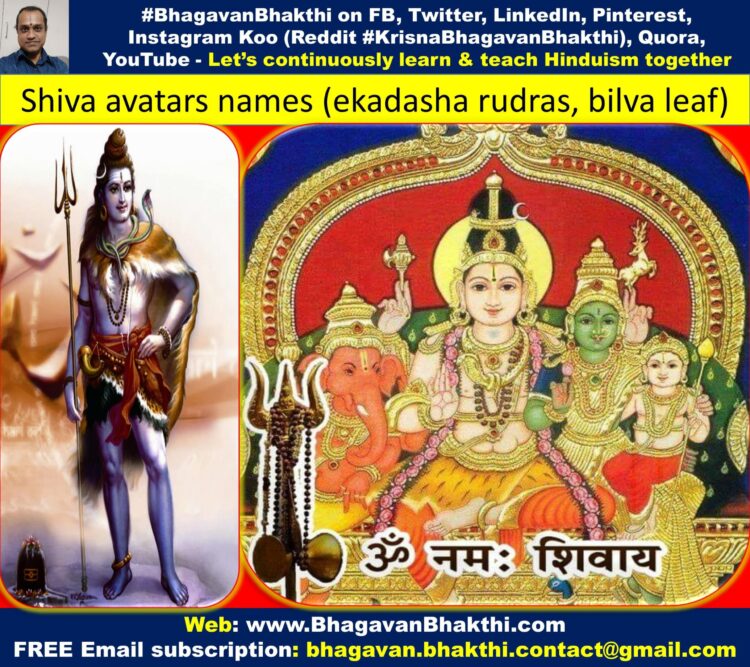 In Bhagavad Gita-Vibhooti Yoga, Bhagavan Sri Krishna says that He is Shankara among the ‘Ekaadasha Rudras’ (eleven Rudras).

Also, Lord Shiva is popularly known as ‘Hara’, means, the one who destroys all the evil. Hara (Haraye Namah) forms part of 24 Keshava naamaas that we recite during ‘Aachamanam’.

Lord Shiva as Laya-kaaraka is the ‘Maha Rudra’, that is, ‘Ugra’ / great destroyer, fearless.

Lord Shiva is ‘Shatru Bhayankara’, that is, someone who not only destroys creation as per directions of the supreme Bhagavan Sri Maha Vishnu, but also destroys both internal and external enemies and also provides cure for all diseases.

Lord Shiva is called as ‘Mahadeva’ (great God). Though his ‘tattva’ is ‘Taamasa guna, Lord Shiva is ‘Satvika’ and serene in nature and worshiped by one and all irrespective of their temperament.

Bhagavan Sri Maha Vishnu also in different avatars, worshiped Lord Shiva for Loka Kalyana (to teach to the ordinary people on how to worship Lord Shiva), welfare of the mankind and to maintain the Loka-reeti (local conventions).

After the episode of Daksha Yajna, Lord Shiva gets marries Sri Parvati Devi (manifestation of one of the Goddess Durga).

Lord Shiva is also called as ‘Vaamadeva’, which literally means the one who is very handsome, fair and pleasant.

Vaama also means left; and left side for any Purusha is the seat of female energy (Stree Shakti).

It is very commone to find Lord Shiva being worshiped in ‘Linga roopa’ due to a curse from Sage Brugu.

Since that time, ‘Shiva Linga’ has become a symbol of Lord Shiva that is being worshiped in all the temples across the world.

Lord Shiva’s abode is Kailasa Parvata, that is, ‘Mount Kailasa’.

Now let us learn about the the symbolism of Lord Shiva 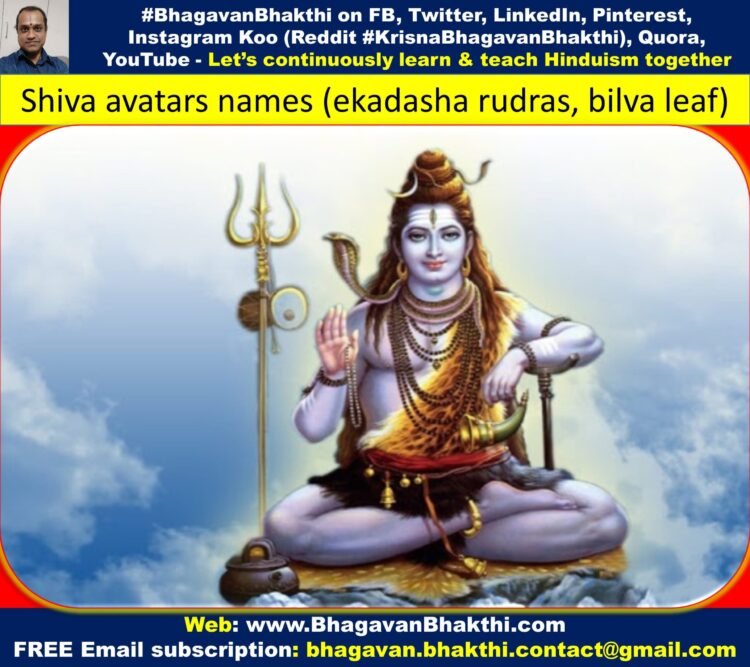 Lord Shiva symbolism are as given below:

Lord Shiva always will be in meditation

Lord Shiva will be wearing the skin of a tiger

Dynamic and charming personality, that is as ‘Sundara’

Lord Shiva is having serene looks in a yogic posture

Lord Shiva is called as ‘Trinetra’, as he is having three eyes.

Lord Shiva has Sri Surya Deva in his right eye and Sri Chandra Deva in his left eye and Agni in his third eye in between the eye brows.

Lord Shiva is having ‘Panchanana’, that is, someone who is having five faces.

The different names of Lord Shiva five faces are as given below:

Lord Shiva has three eyes in each of his five faces 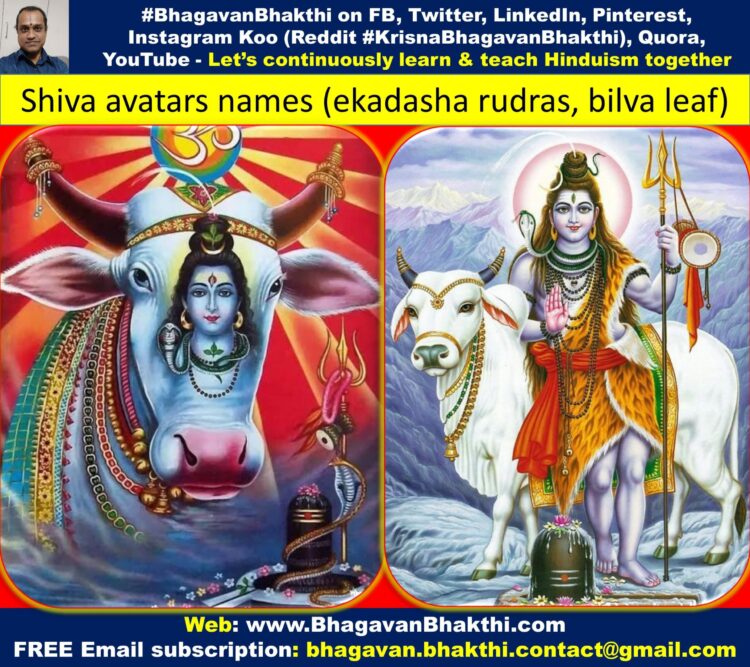 Lord Shiva’s throat is blue in color and thus he is known as ‘Neelakantta / Neelagreeva’. These names came when Lord Shiva drank the ‘haalaahala visha’ (poison) during the ‘amruta manthana’.

Lord Shiva will always be adored with sarpa / serpent around his neck. Thus Lord Shiva is called as ‘Naagashekhara / Sarpabhooshana’.

Lord Shiva has ‘Crescent Moon’ on his head and thus he is known as ‘Chandrasekhara or Somashekhara’.

Lord Shiva holds a small drum (Damaru) in his hand.

Lord Shiva is always depicted as both a Yogi.

Lord Shiva is also a ‘kutumbasta’ / householder with Goddess Sri Parvati Devi, who is inseparable from Lord Shiva.

Lord Shiva or Lord Rudra Deva is also depicted as ‘Chaturbhuja’ (four hands) having four hands with ‘Varada mudra’, ‘Abhaya mudra’ in two hands, ‘Trishoola’ in the third hand and ‘Deer’ in his fourth hand. 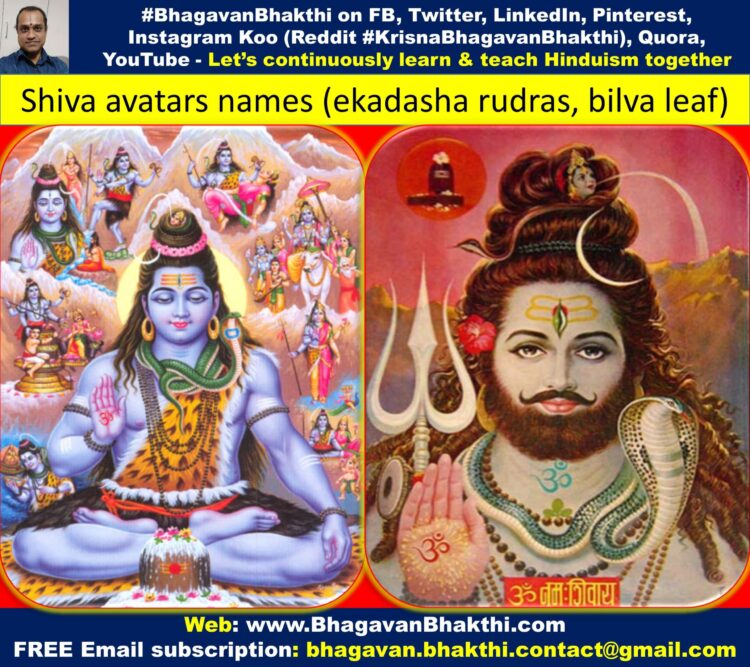 The different avatars of Lord Shiva are as given below:

Ekadasha Rudras are a class of Vedic deities, that is, they are eleven (11) in number along with Dvadasha (12) Aadityas + Ashtta (8) Vasus + Prajapati + Vashatkara, they form a significant group of 33 principal Devatas / Demigods.

Ekadasha Rudras nomenclatures differ in different sacred texts and puranas and there is no unanimity in the list.

(This could be because of the same set known by various names. This is similar to one person have more than one name.)

In Bhagavad Gita (Vibhoothi Yoga), Bhagavan Sri Krishna says that He is Shankara among Ekadasha Rudras.

Ekadasha Rudra names are as given below:

(According to Padma Purana/Srimad Bhagavatam) 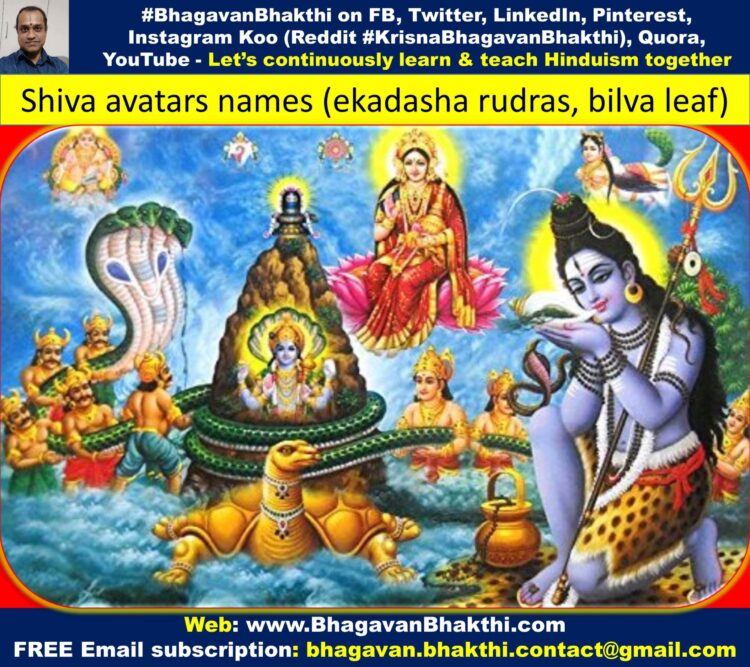 Other famous names of Lord Shiva are as given below:

Few of the other famous names of Lord Shiva are:

To know more names of Lord Shiva with meaning you can visit this link:

Sacred granthas / texts about Lord Shiva are as given below: 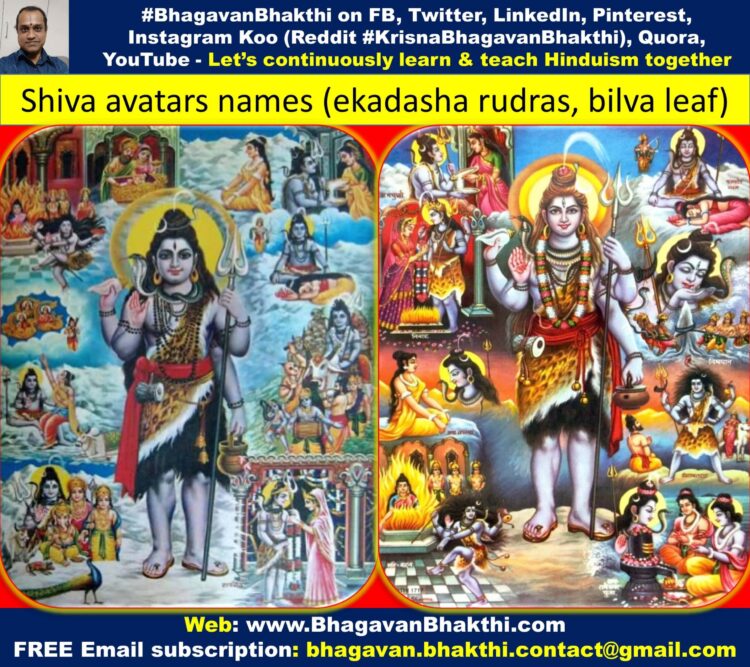 Sacred shlokas / hymns of Lord Shiva are as given below:

Lord Shiva family member names are as given below:

Lord Ganesha is his elder son

Lord Kartikeya is his younger son

Nandi is the vehicle of Lord Shiva

Simha is the vehicle of Parvati Devi

Mushaka is the vehicle of Lord Ganesha

Mayura is the vehicle of Lord Kartikeya

What Lord Shiva loves most is as given below

Lord Shiva is called ‘Abhisheka Priya’ (anointing) and Lord Shiva is also called as ‘Stotra Priya’ (loves if someone chants his names). 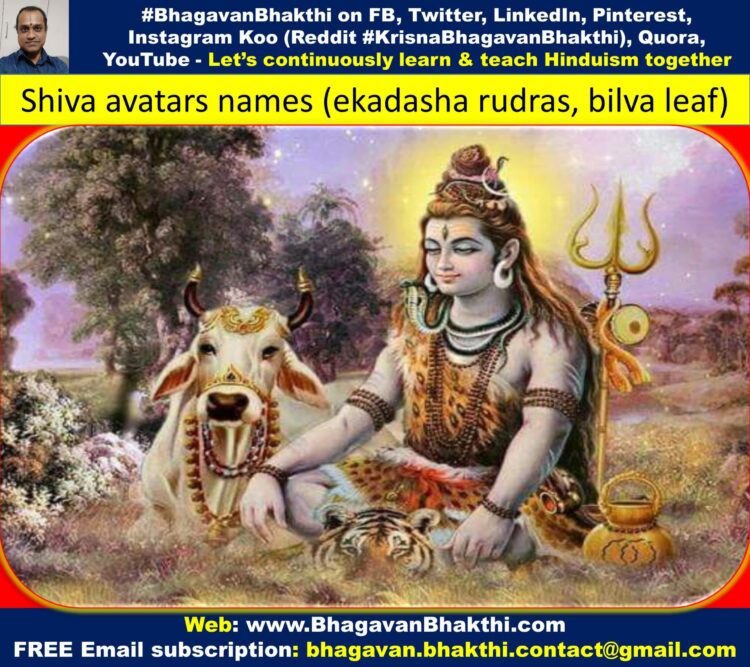 Why Bilva Patra is very dear to Lord Shiva is as given below:

Lord Shiva being the ‘Greatest Vaishnava’ will be very much pleased, if someone worships Him with ‘Bilva patra’. This ‘Bilva patra’ got manifested from Sri Maha Lakshmi Devi the divine consort of Bhagavan Sri Maha Vishnu.

Lord Shiva calendar is as given below:

Though Lord Shiva can be worshiped on a daily basis, some of the important days earmarked for his worship are as give below:

On the lunar day coinciding with Ardra Nakshathra 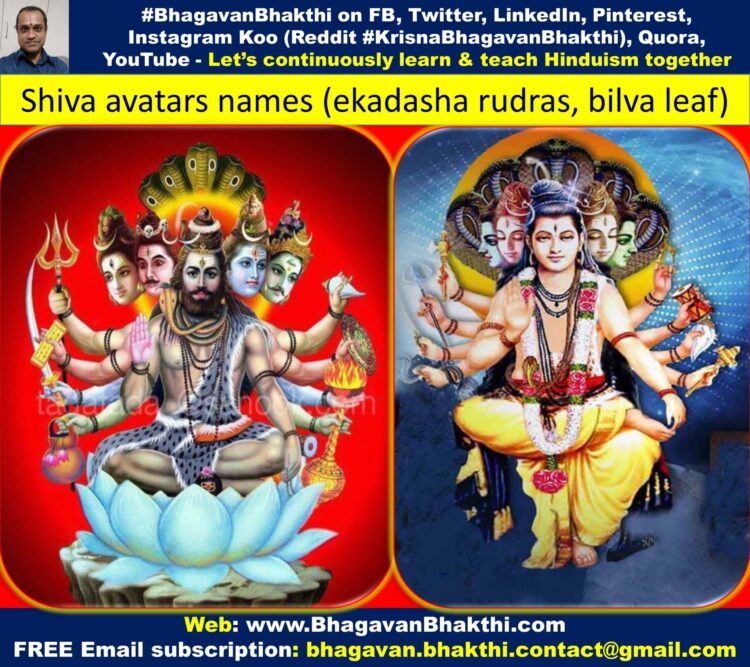 Facts about Maha Shivaratri are as given below:

The great Maha Shivaratri means the auspicious ratri / night belonging to Lord Shiva and this day is his most favorite day for him:

There are several interpretations regarding the origin of Maha Shivaratri. Few of them are as given below:

It is one of the day that Lord Shiva emerged out in the divine world in Linga roopa (Jyotirlinga).

It is the day Lord Shiva drank ‘Haalaahala visha’ (poison) in the episode of ‘Ksheerasaagara Mathanam’ (samudra manthanam / churning of ocean).

It is the day Lord Shiva performed his cosmic dance called Pralaya Taandava.

There may be several reasons for origin of Maha Shivarathri. But it is the most favorite day of Lord Shiva and worshiping Lord Shiva on this day is highly meritorious and sin remover. 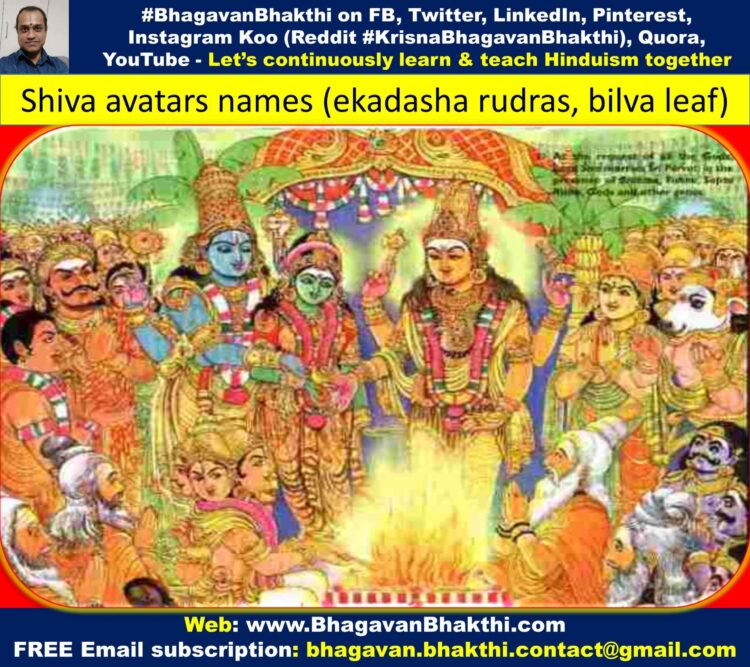 How to recognize Maha Shivaratri day is as given below:

As per Hindu Sanatana Dharma Chandramana or Lunar Calendar, every ‘chaturdashi’, that is, 14th lunar day of the Krishna paksha (dark fortnight) is known as Maasa Shivaratri.

Sometimes it may fall on the ‘Trayodashi’ (13th day) also.

It is decided based on the presence of ‘Chaturdasi tithi’ (14th day) extending beyond midnight on that particular day.

At the same time, every ‘Trayodashi’ (13th) or ‘Chaturdashi’ (14th) day of the Krishna Paksha (dark fortnight) is not considered as Maha Shivaratri. These days are considered only as ‘maasa Shivaratri’ (monthly Shivaratri).

It is only the ‘Trayodashi’ (13th) or ‘Chaturdashi (14th) day of Krishna Paksha (dark fortnight) occurring in the Chandramana / lunar month of Magha Maasam associated with ‘Chaturdashi tithi’ is recognized as ‘Maha Shivaratri’.

Generally it occurs in the calendar months of February/March. 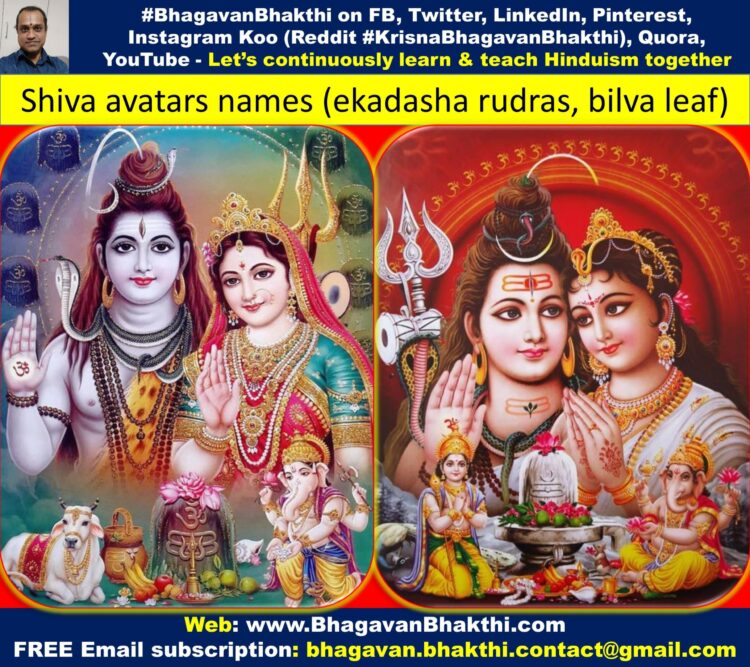 Customs & traditions related to Maha Shivaratri are as given below:

The great day of Maha Shivaratri is dedicated exclusively to Lord Shiva is celebrated with great religious significance and fervor across the country by all Hindus irrespective of the caste and creed.

These customs may differ according to one’s sampradaya / tradition:

In general some of the traditions in vogue are as given below:

Shiva and Parvati Kalyanam (marriage) is also held at some places on the occasion of Maha Shivaratri.

In the Madhva sampradaya / tradition, there is no upavasa / fasting and Jaagarana on the day of Maha Shivaratri. Darshana of Lord Shiva during Pradoshakaala is essentially prescribed.

Special celebrations are held on the eve of Maha Shivaratri at all the holy Shiva Kshetras. Here lakhs of people gather to offer their obeisances and salutations to Lord Shiva. Lord Shiva is the great destroyer of sins and one of the most the benevolent Demigods. 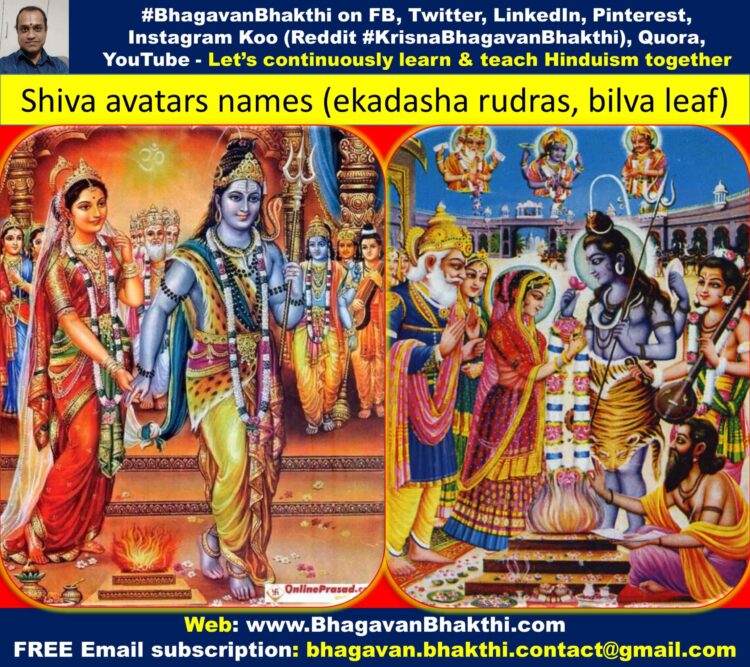 List of the famous Lord Shiva Kshetras (Divine pilgrimage places) are as given below:

Bheemashankar in Maharashtra near Pune (Maharashtra)

Nageshwar (Darukavana) near Dwaraka in Gujarat

Lord Shiva had manifested at the following places which are regarded as the Pancha Bhootha Shiva Kshethras.

To know more information on Lord Shiva and Shivaratri, you can visit this below link: