Just before going to “Importance of number 6 in Hinduism (significance) (facts)“, let us know a brief, basic and very important information. 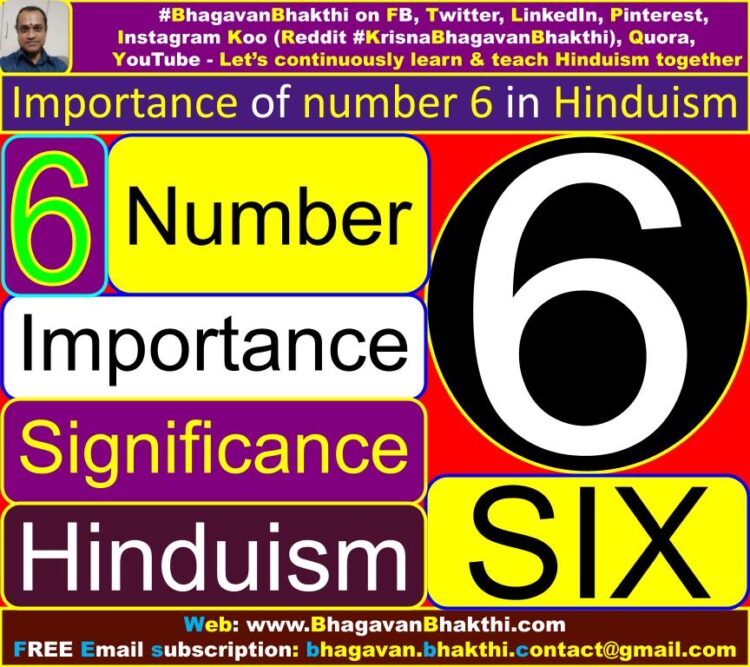 Hindu Sanatana Dharma is highly unique. We give importance to each number too.

In Hinduism ‘Shoonya’ means one of the names of Bhagavan Sri Vishnu. Shoonya means, he is someone who is the ‘aadi deva’, that is –

he is the ‘Grand First’. Shoonya doesn’t means zero. But instead it has meaning like “Grand First”.

Similarly, Bhagavan Sri Vishnu also means ‘ananta’, this means, he is someone who will be present until the infinite time – ∞. He doesn’t has an end. 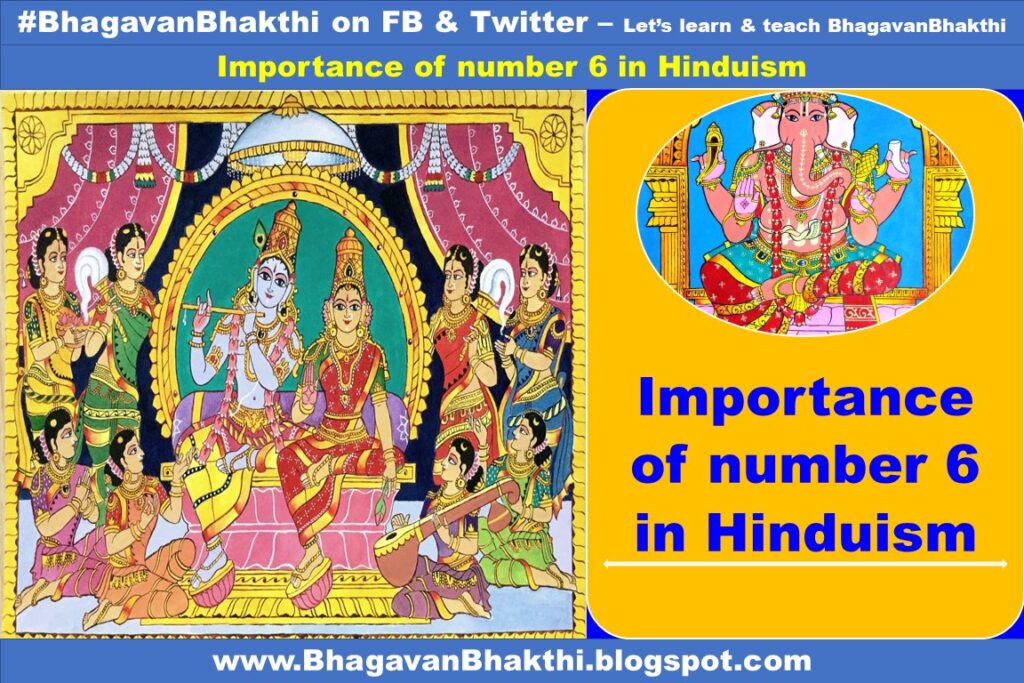 In Hindu Sanatana Dharma or Hinduism the number six (6) has very important and unique significance.

All these are interrelated to key words and terminologies like below in Hindu Shastras / Philosophy:

Let us today discuss, few of them as below:

First let us understand the meaning of the word AriShadvarga: 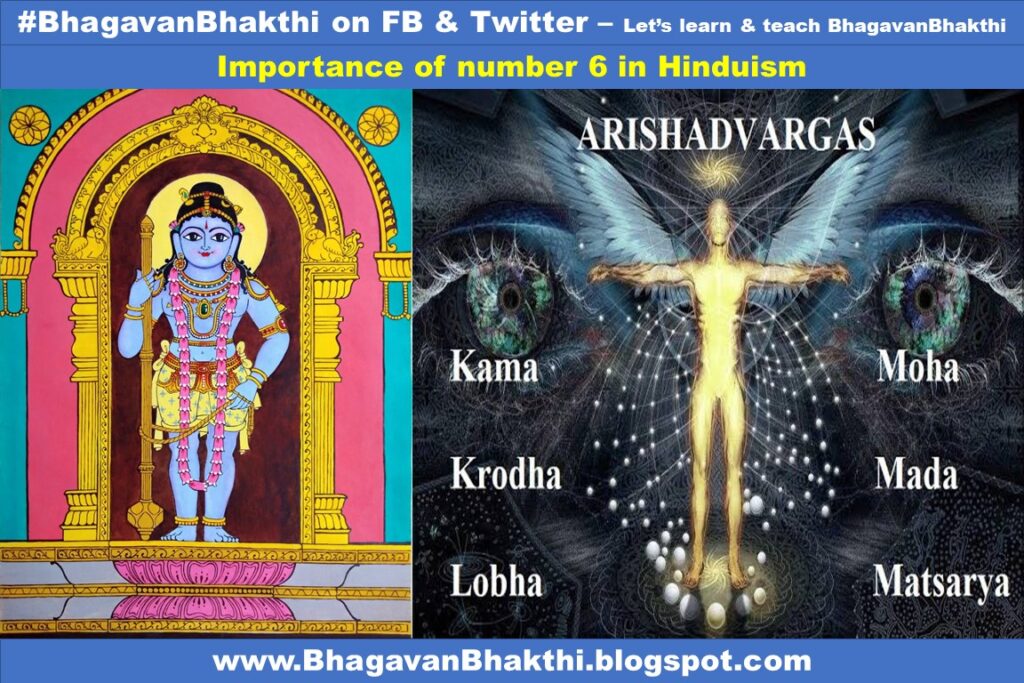 This means there are a group of 6 six things which are human’s real enemy. They are as given below:

The above given terminologies are called as Arishadvargas.

These are also known as Shadripu (six enemies).

These are the antarika shatru / internal enemies. These are unwanted and negative passions of humanity which are responsible for all kinds of difficult experiences in our lives.

These unwanted and negative passions prevent humans from realizing the ultimate reality.

When these unwanted and negative passions overrule our minds, aham / egoism starts to grow within us, and these will become biggest enemy of humans.

A man with aham / egoism become narrow minded and completely ignorant of his surroundings.

First let us know the meaning of this:

These are known as Shad-Urmi.

This means six waves of existence, that is, emotional and physical feelings of all the humans, especially of the humans who belong to Kali Yuga.

These are the 6 waves of existence of the Shadripu (six enemies).

In the great Sri Vishnu Sahasranama stotra shloka #88 we find Bhagavan Sri Maha Vishnu has being described as:

The meaning of this shloka is:

He (Bhagavan Sri Maha Vishnu) is the antaka / destroyer of all asura / evil forces.

He is the conqueror any army in the multiverses.

He will be a terror and who can create panic in the shatru / enemy camp.

Such Bhagavan Sri Maha Vishnu is not only a slayer of bhahiranga / external enemies, but He is also a destroyer of antarika / internal enemies too, that is, the Arishadvargas.

He is an Ari (Shatru) to Arishadvargas.

Sri Shanmukha is symbolized as having shan mukha, that is, six faces.

In our Shastras it is said that six faces represent the five senses + the mind.

Shanmukha is also known as Shanmaatru.

This is because, Sri Kartikeya was brought up by six mothers known as Kruttikas who made him to suckle. For this reason, He is also known as Kartikeya. 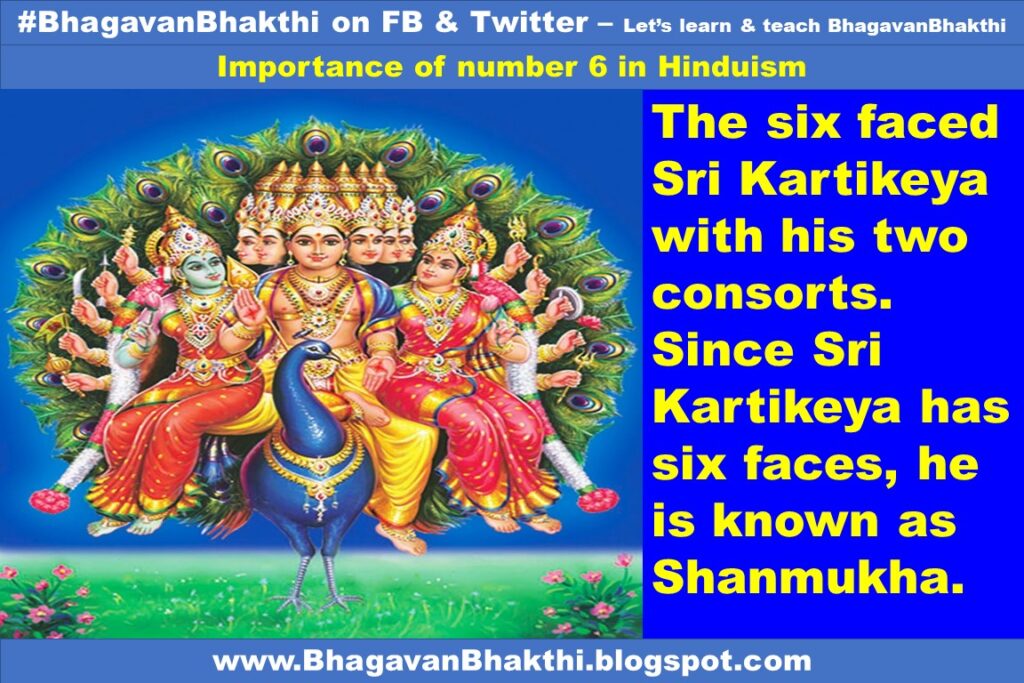 Skandha Shashti is done in the honour of Sri Kartikeya / Subramanya is done every year. It is also known as Subramanya Shashti.

This occurs on the sixth day of Shukla paksha / bright fortnight in the chandramana / lunar month of Maargashira maasam.

This is said to represent Lord Shanmukha (Kartikeya).

In the Rudraksha’s theory it is said to bestow upon someone who wears this Rudraksha like courage, learning, good health, knowledge, wisdom  and also save from the worldly problems and traumas. 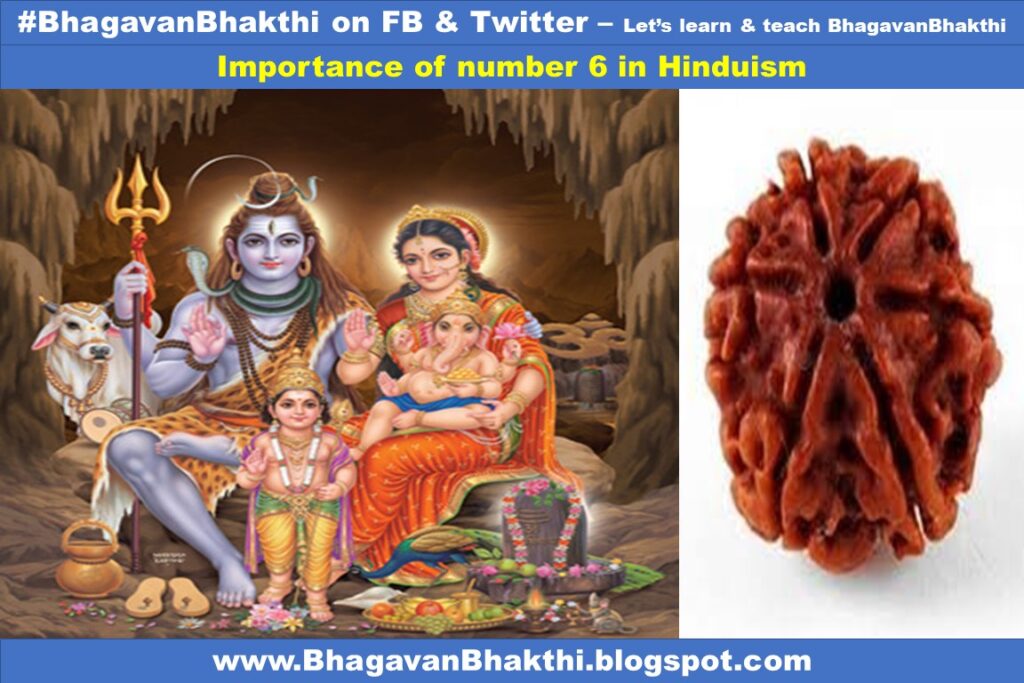 A Hindu Chandramana / Lunar year is divided into six Rutus (Ritus) / seasons of two months each known as Rutus (Ritus), that is – 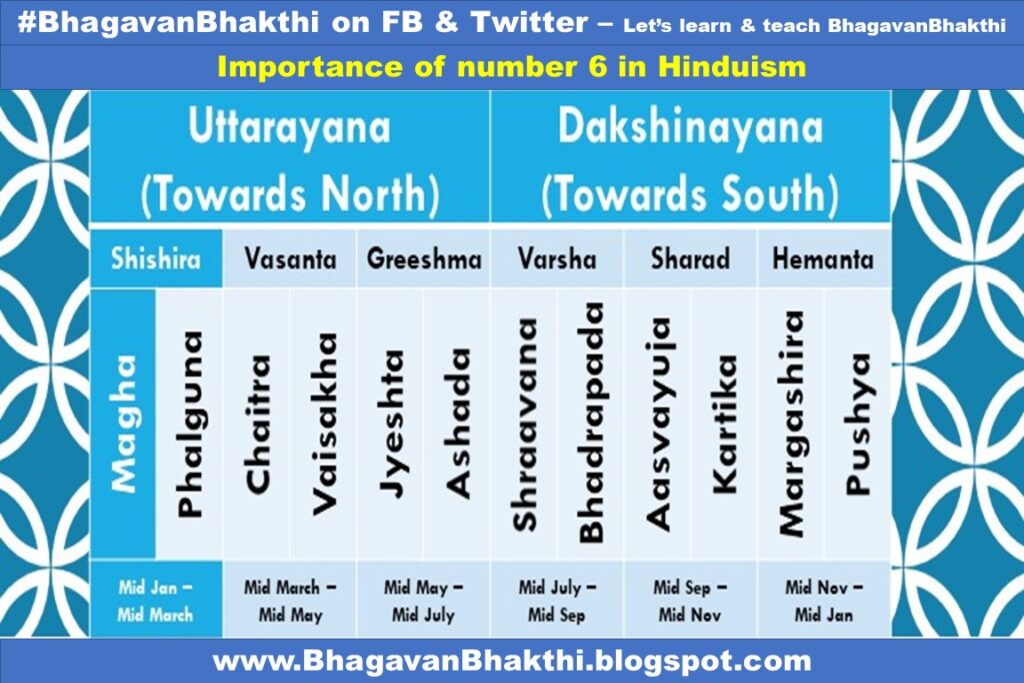 Below given is the list of Hindu maasam (months) with it’s respective Ritu (Seasons): 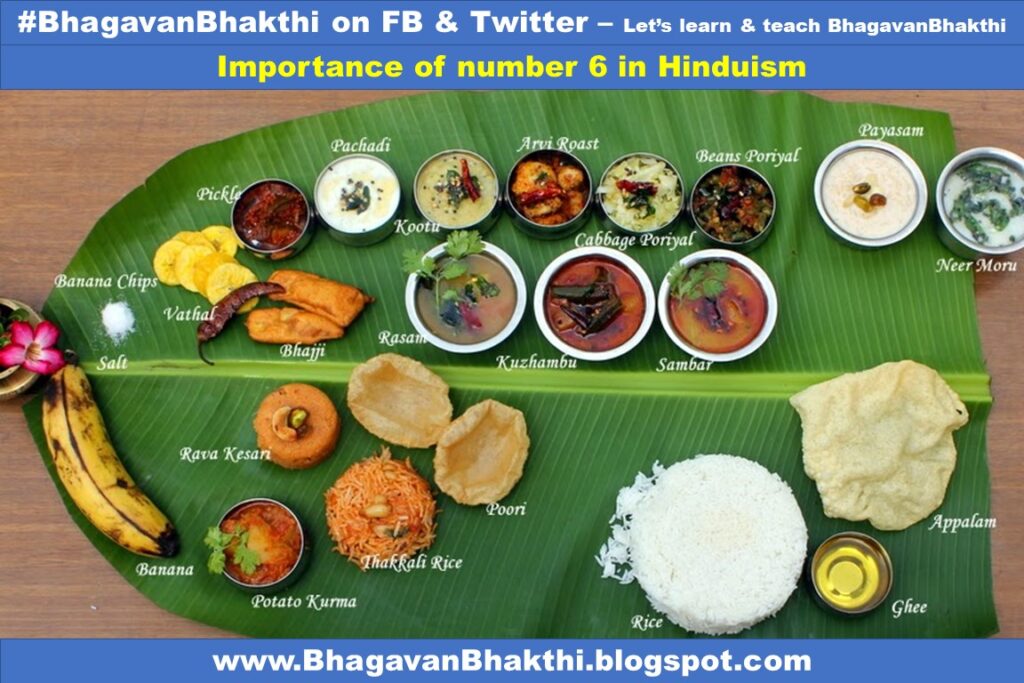 These are the six tastes or flavours known and there name is called as ‘shadruchi’ or ‘shadrasas’ (6 flavour).

On the Ugadi, that is, on the Hindu New year day there is a sampradaya / tradition in South India of eating a sauce food ingredient made with a combination of six items that gives six different tastes (shadruchi).

These food ingredients are:

In few places, people use sugar cane instead of jaggery and pepper instead of chilies.

It is popularly called as Bevu-Bella in Kannada, Ugadi Pachhadi in Telugu.

The philosophy behind eating this sauce with six tastes is to say that life is not a bed of roses, but instead, it is a mixture of sadness, happiness, anger, fear, disgust, and surprise.

And this has to be accepted together with equanimity by each and everyone.

These are the six types of education called as Vedangas.

As per the Hindu Puranas, in Kali Yuga six Kings will create new eras (Sakhas) which will be named after them. 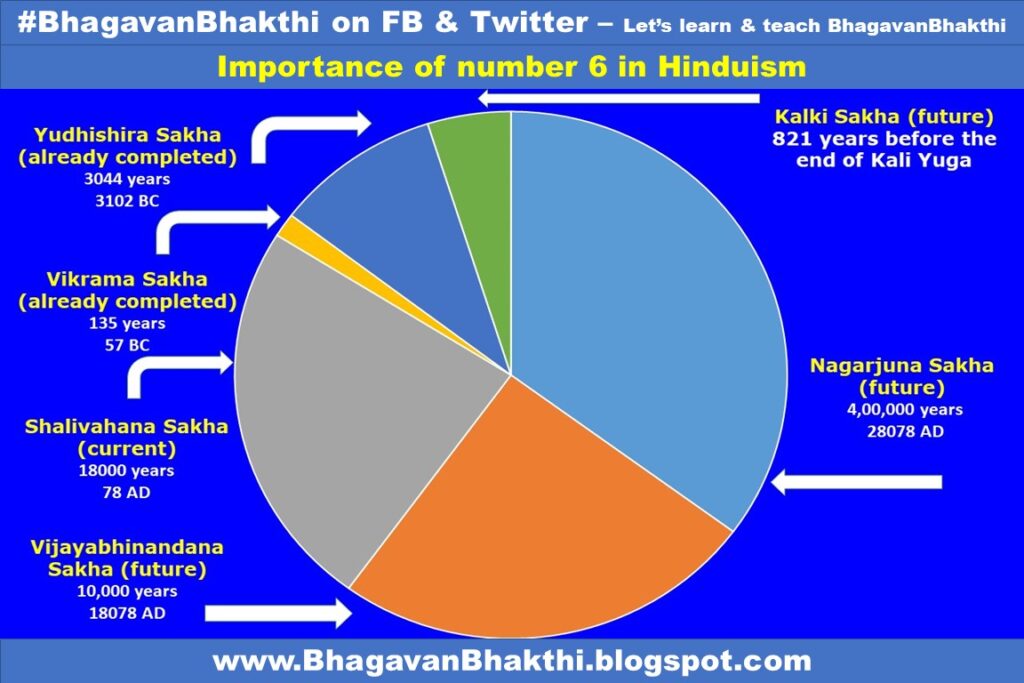 They are as given below:

1. Yudhisthira Sakha (Dharmaraja) (Completed) – Yudhisthira Panchanga / calendar started in the year 3102 BC and existed for 3044 years.

2. Vikrama Sakha (Completed) – Vikrama Panchanga / calendar started in 57 BC and lasted for 135 years

Six Sanatana Dharma / Hinduism schools of tatva shastra / philosophy are as given below: 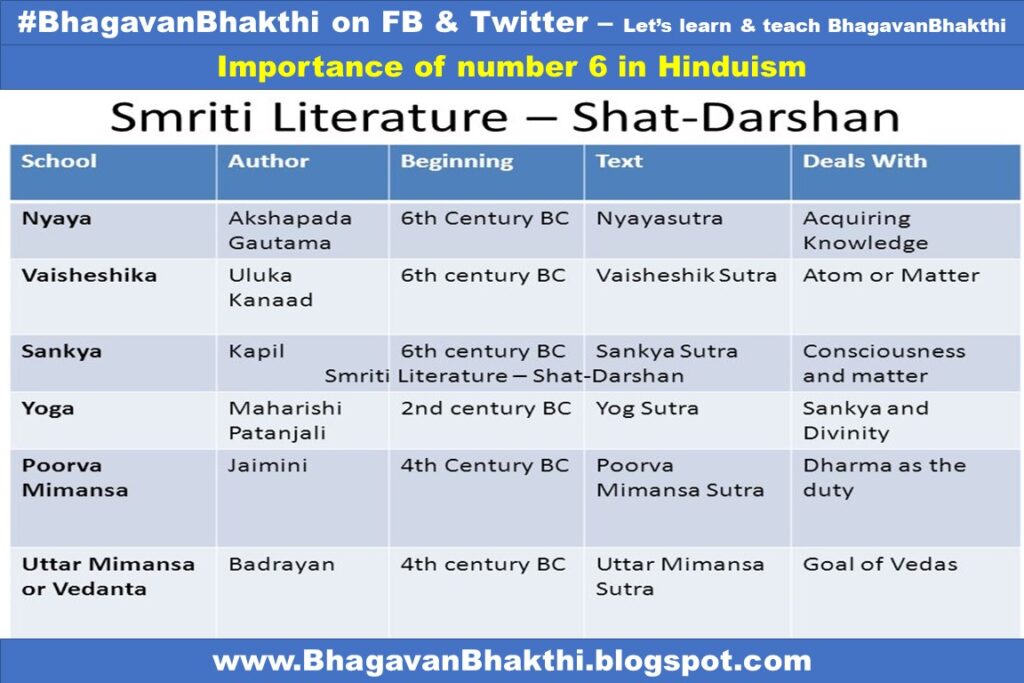 As per the Sanatana Dharma / Hinduism Shastras, six types of Dharma / duties prescribed for a Brahmana are:

3. Learning and studying of Vedas 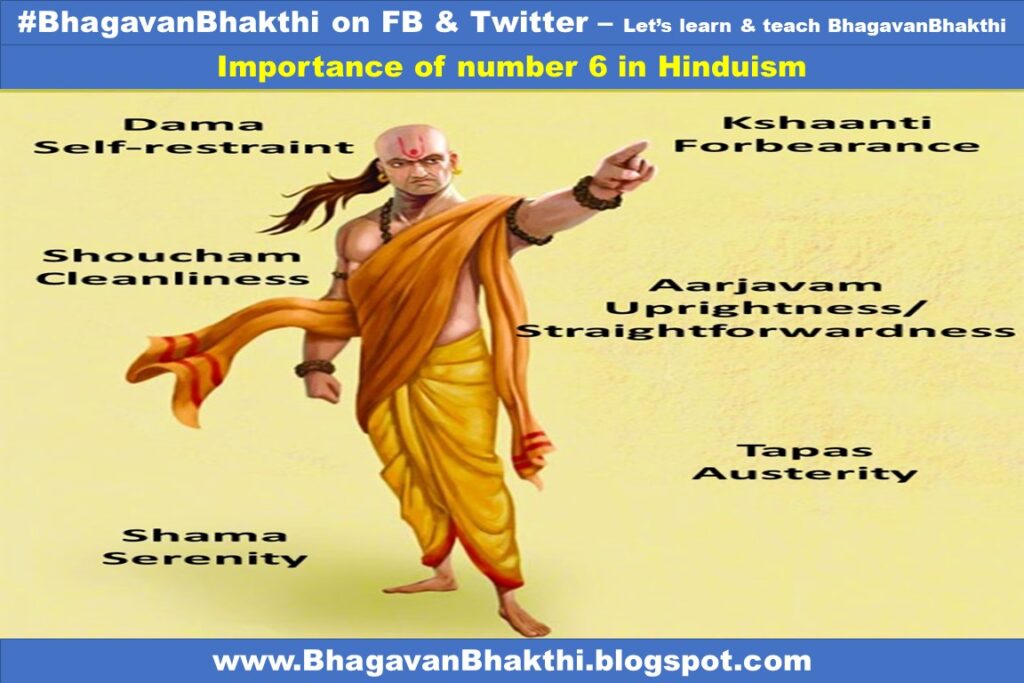 There are the six qualities (duties) a Brahmana should nurture. This is reality that portrait him as a complete Brahmana besides knowledge, wisdom and faith in the Bhagavan.

In the concept of Nyaasa, putting or investing hands and other parts of the body with mantras is to do the following;

To purify (cleaning) the body

To attain power to perform a mantra japa 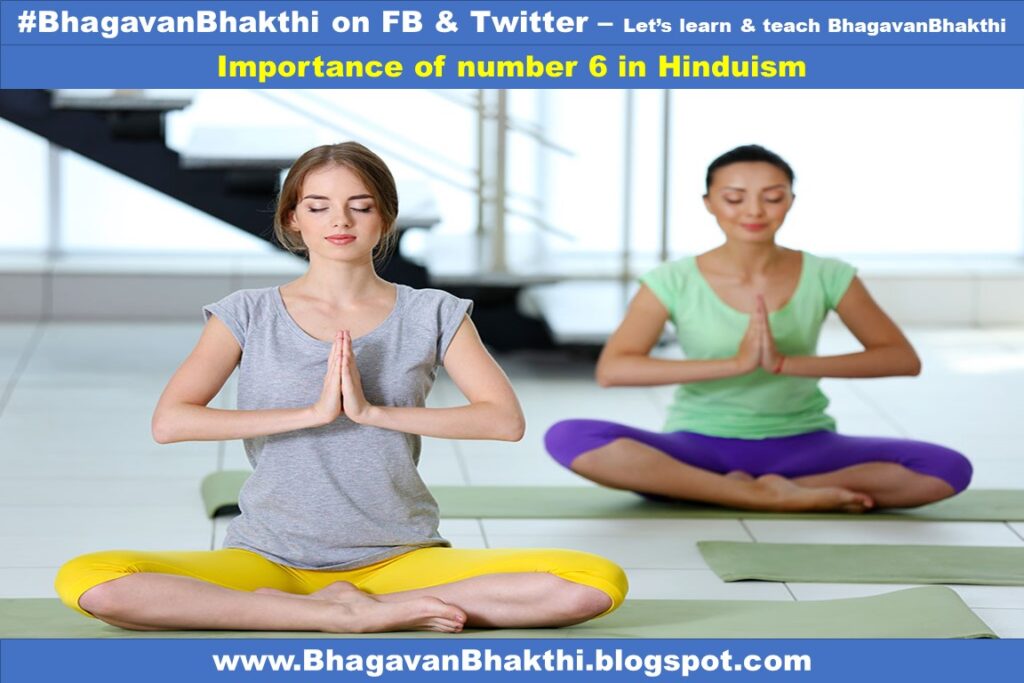 It is a preparatory stage for any mantra saadhana.

Before performing Gayatri japa, we usually find and perform Nyaasa during Sandhyavandana.

This ceremony is done, so that the whole body of the tapasvi / meditator becomes charged with daivi shakti / divine power and it has a scientific background also.

Bhagavan Sri Maha Vishnu is free from all imperfections, that is, he is called as ‘nirvikara’, he is the possessor of auspiciousness, he is best and has unlimited number of attributes (Sarva lakshana lakshanyah). 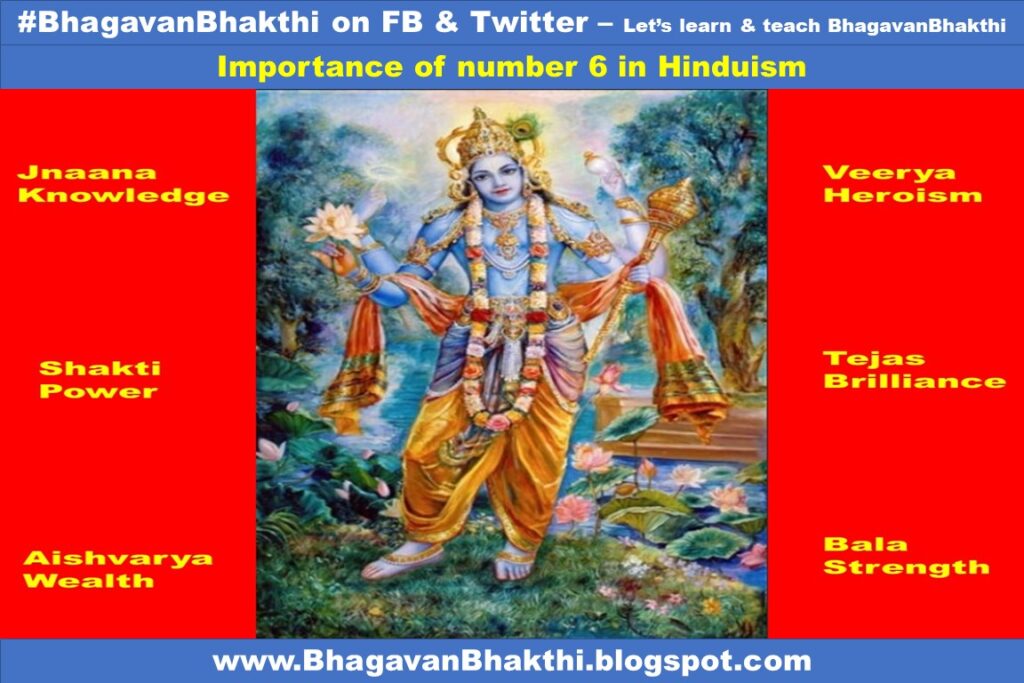 In this six of the lakshana or guna (qualities) are (these are known as Shad Guna):

The above are known as Shad guna, that is, six good qualities of excellence.

In the very first shloka of Sri Vishnu Sahasranama Stotra, we can find Bhagavan Sri Maha Vishnu is been described as

This means, the one who possesses daivi / divine and auspicious qualities like:

All capabilities to do and undo anything and everything

All knowledge in full form

Comprehensive control over everything (sovereignty)

In our Shastras it is said that, on this Uttarayana Parvakaala day one should use Tila (Sesame) seeds in six ways that is: 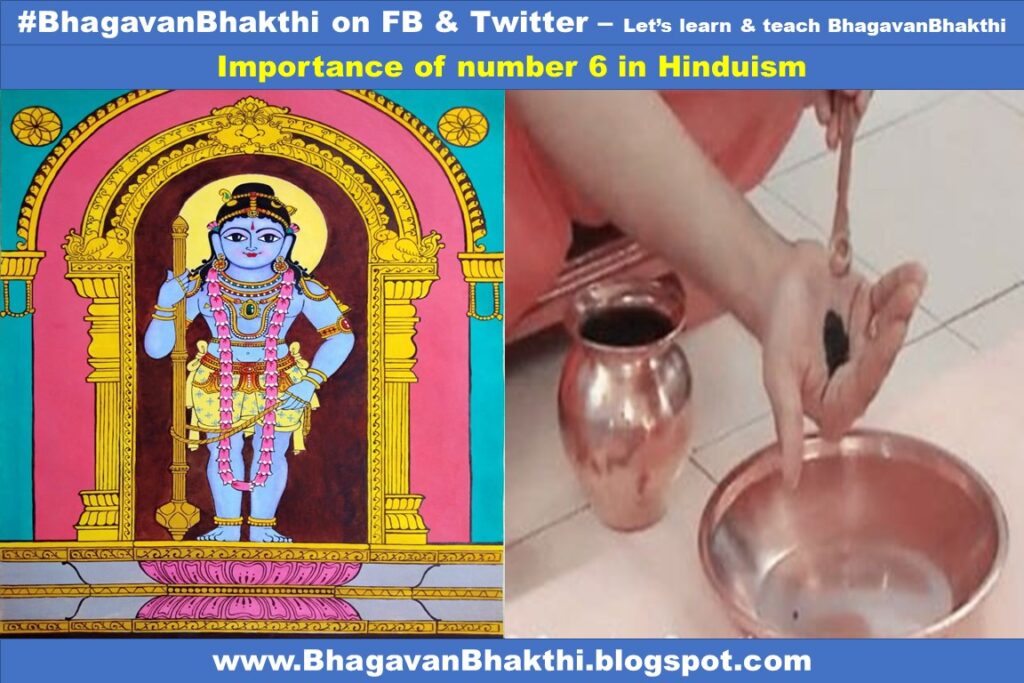 The Shan Mahishi’s names are as given below:

If you are aware of any such important fact about the number 6 (six) in Hinduism, kindly let me know.

More information will be added to this on regular basis. Please visit this post after some time to get updated information.

To know more about the “numbers importance, significance, facts in Hinduism“, visit the below link: