What are Arjuna unknown facts (greatness)

Meaning of the name Arjuna – There are multiple meanings of the word Arjuna, in that few meanings are silver, a tree name, very bright, superbly shiny, highly alert, etc.

List of Arjuna unknown facts (greatness) are as given below: 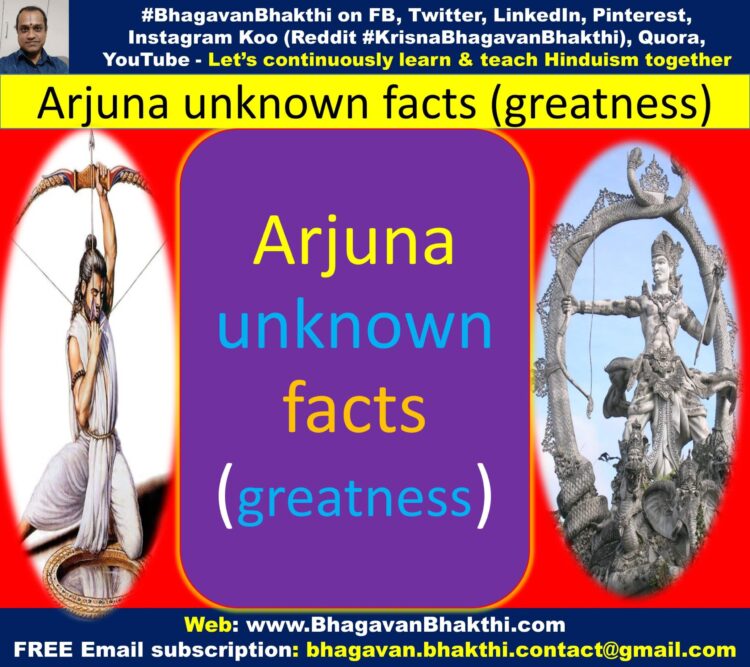 Arjuna destroyed many beasts : Arjuna easily destroyed many animals, beasts in Khandava forest and also Arjuna with the help of Agnideva and Sri Krishna burnt the whole of the Khandava aranya / forest.

Arjuna’s name Krishna : Another name of Arjuna was Krishna, as Arjuna had the dark complexion like Sri Krishna.

Arjuna’s sons : Arjuna had great warrior sons like Abhimanyu (from Subhadra), Babruvahana (from Chitrangada) and others.

Ashvamedha Yagna : Arjuna single handedly defeated many many kings for the Ashvamedha yagna which was performed by his eldest brother Yudhishthira. 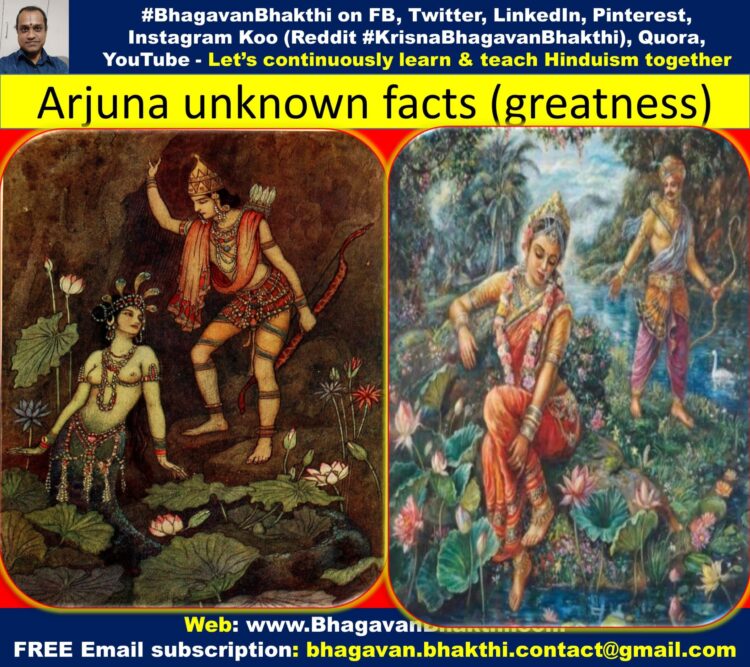 Arjuna can shoot arrow in dark : Arjuna had learnt to shoot the arrow in the dark also.

Arjuna’s another name Gudakesha : Arjuna had a name called Gudakesha, which means someone who could conquer the senses easily.

Arjuna respected Bhima than other brothers : Arjuna had great respects for his elder brother Bhima more than the eldest brother Yudhishthira.

Arjuna Shankha name : The shankha / couch of Arjuna was called as Devadatta. 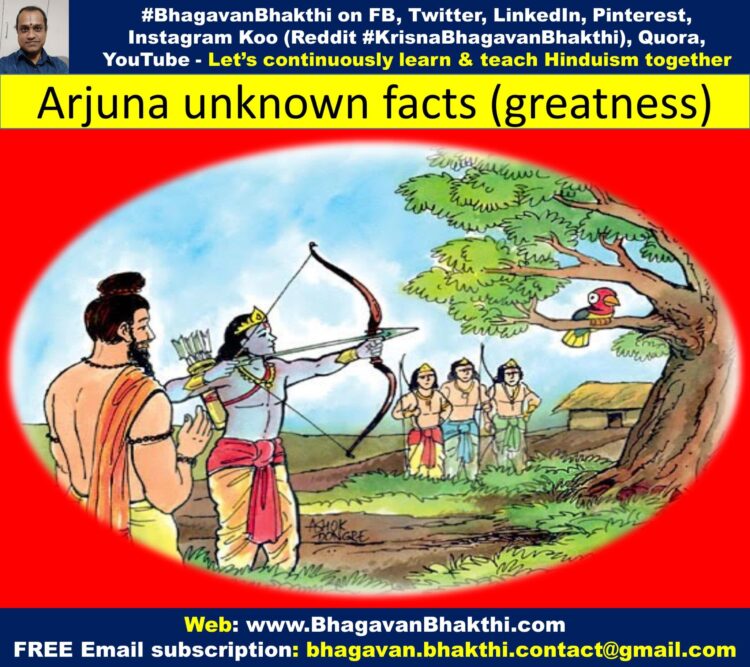 Arjuna avatar of Indra Deva : Arjuna was the svayam avatar of Sri Indra Deva. Arjuna / Indra Deva in his earlier life had taken avatar as Vali (during Tretayuga period, that is during Sri Rama’s period). 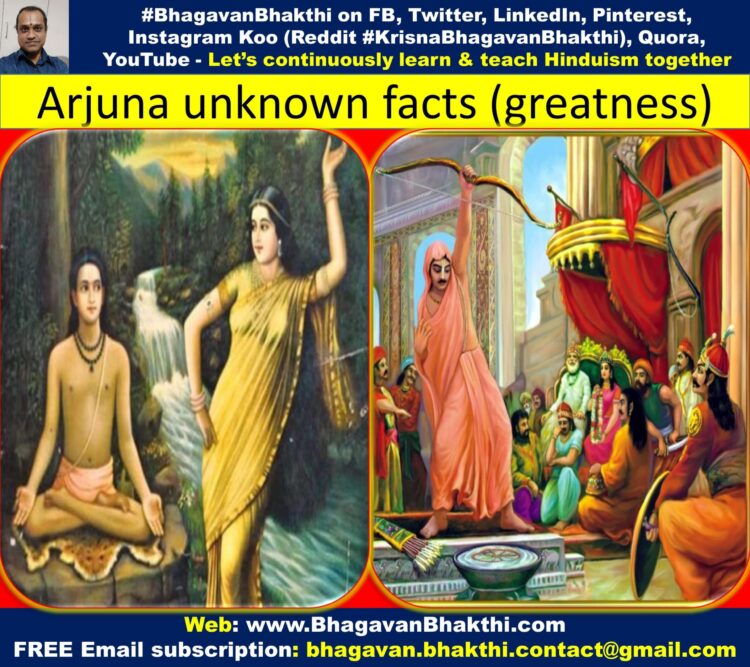 Arjuna during the Draupadi svayamvar : Above image (right side). 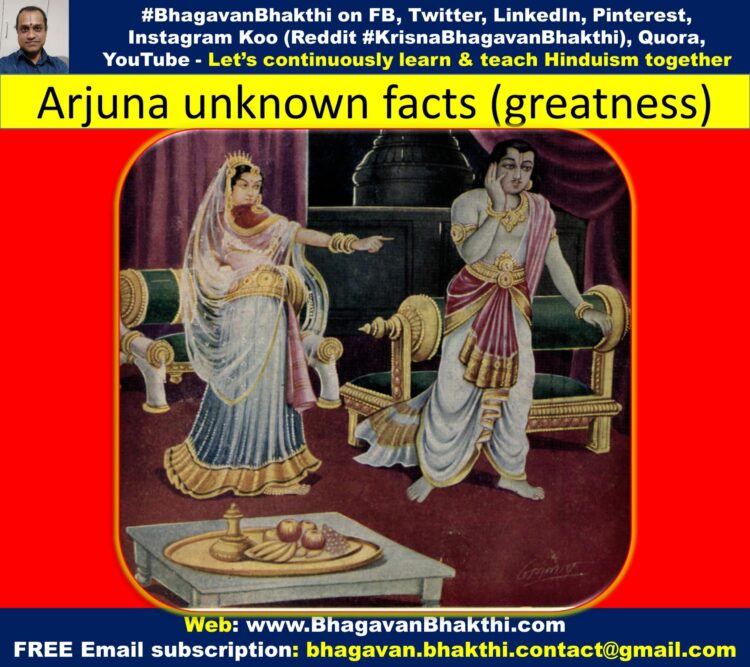 Arjuna and Urvashi : Once Urvashi proposes to Arjuna to make love with her.

But Arjuna refuses this proposal and thus Urvashi slaps him (See above image) and gives him curse to be born as woman and thus he becomes Bruhannala and teaches dance to Uttara Kumari (See below image) during the exile period. 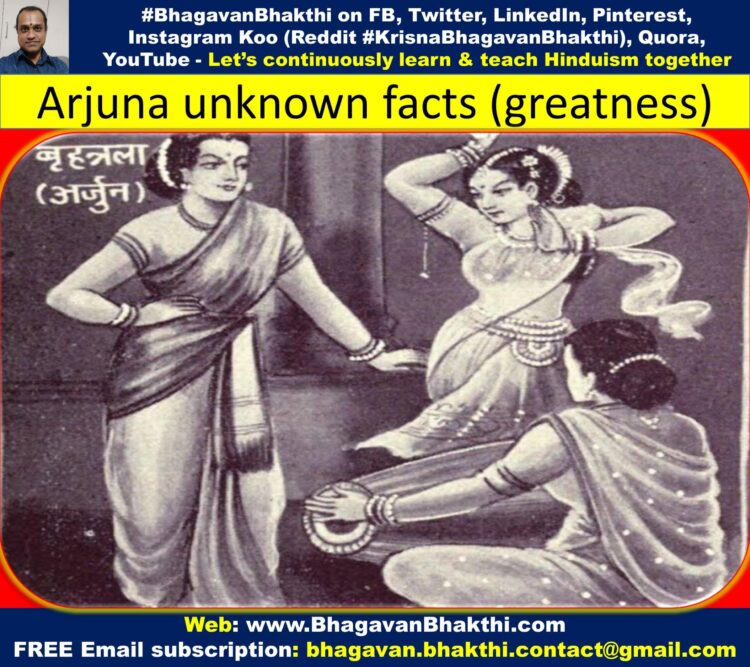 To know more information about “Why Krishna always helped Pandavas”, you can visit this below link: