First, let us understand what is the real meaning of new year:

The meaning of the new year is that, something new should be happen, seen etc.

If something new happens, then we can call it as New Year. According to the Sanatana Dharma Panchanga, whatever is said above, they all change in our Chaitra Maasa (month) (which comes at the end of March or at the starting of April). 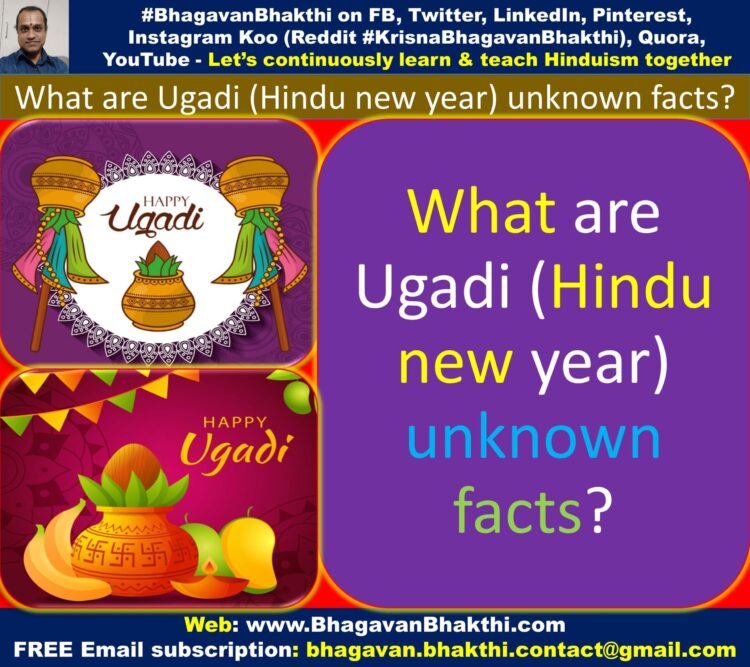 Now you have to decide which new year is to be celebrated.

Think about it seriously.

Our Sanatana Dharma is not an ordinary Dharma. It has been started by svayam Bhagavan Sri Hari himself and has been carried forward by our Rushis, ancestors etc.

Now it is entirely up to us how we will take it forward.

Think wisely and celebrate only the real new year.

Yugadi / Ugadi, is the new year of the Hindu time element.

In this season, we find trees start to blossom with colorful flowers. All the trees will be filled with green leaves.

Divine smell will be emanating from the trees and many more things will be happening with the advent of the Vasanta Rutu (Spring Season).

Yugadi is one of the great names of Bhagavan Sri Maha Vishnu. 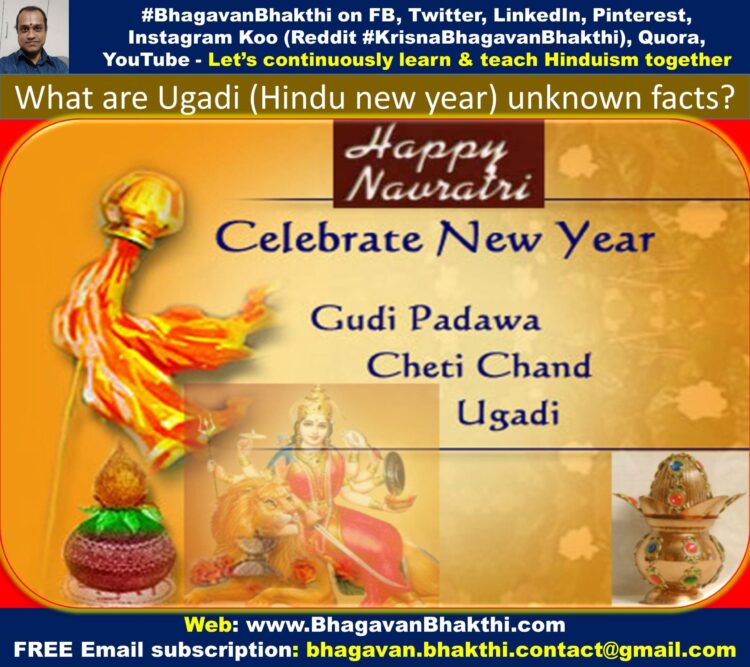 ‘Yugadi-krit’, that is, someone who creates the Yugas

‘Yugaavarto’, that is, someone who is the cause of the repetition of the Yugas

Hence, it is the perfect time to celebrate this day with the worship of the Para Brahma, that is, svayam Bhagavan Sri Maha Vishnu, who is the cause and effect of this infinite ‘Time Element’.

As per the Hindu Chandramana Panchanga / Lunar Calendar, first day (Prathama thithi – first day) of Shukla Paksha (Bright fortnight) in Chaitra Maasam is considered as the day on which the Creation had started, that is, this marked the beginning of ‘Sri Sveta Varaha Kalpa’.

This day is being referred to as Kalpaadi.

It is also considered as the day on which the Yuga (new era started) had commenced and hence, it is also referred to as Yugaadi or Ugadi. 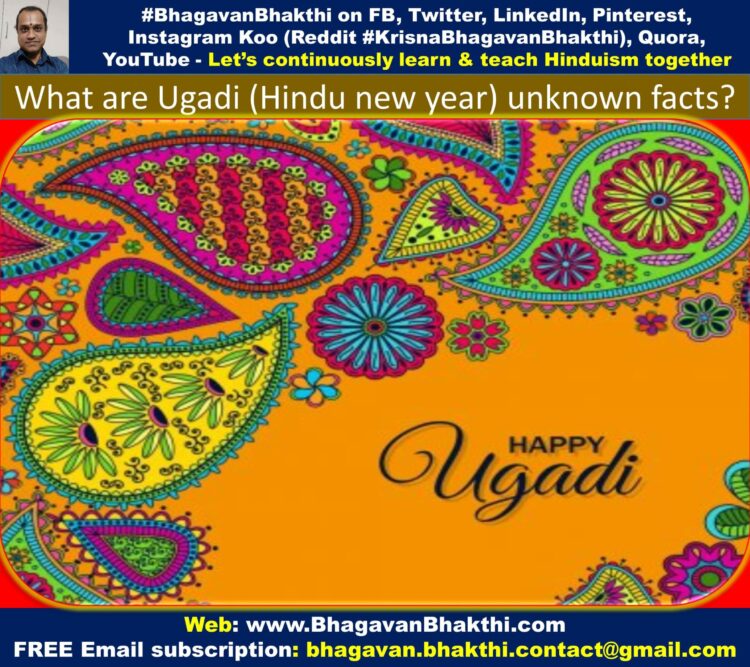 As per the jyotishya / astrological (movements of the star and planets) estimates, it is said that Bhagavan Sri Krishna’s Niryaana (leaving the earth) took place at the early hours on the ‘pratipada’ (that is, first day of the bright fortnight).

This is as per the ‘Chandramana Panchanga’ (lunar month) of ‘Chaitra Maasam’ (Chaitra month) corresponding to 18.02.3102 BC that marked the beginning of the Kaliyuga.

Hence, Yugaadi / Ugadi may also be assumed as the starting of Kaliyuga. 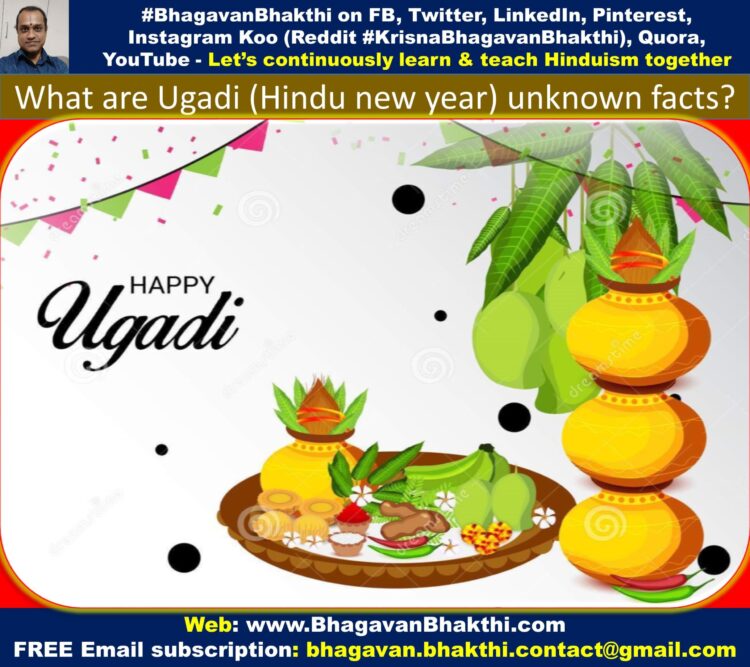 In the concept of Ugadi, the ‘samvatsara’ (sixty year cycle) has the following names: 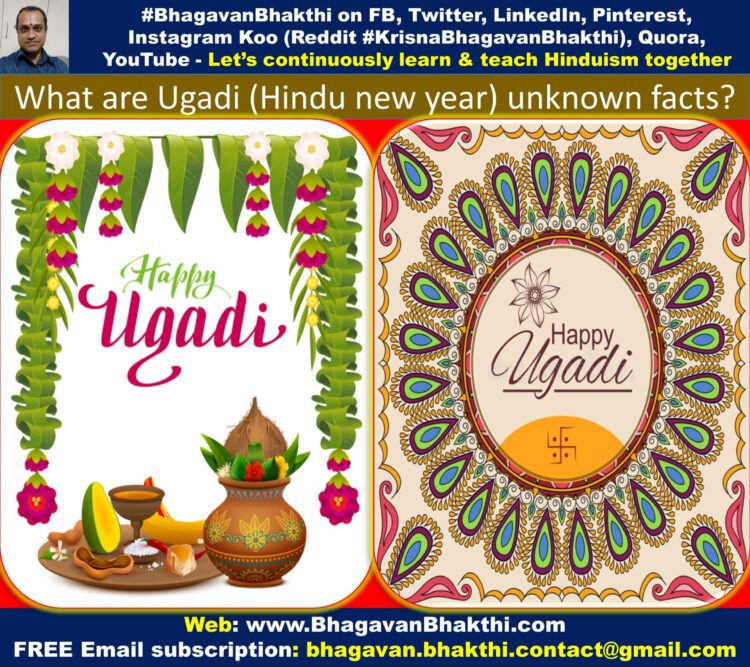 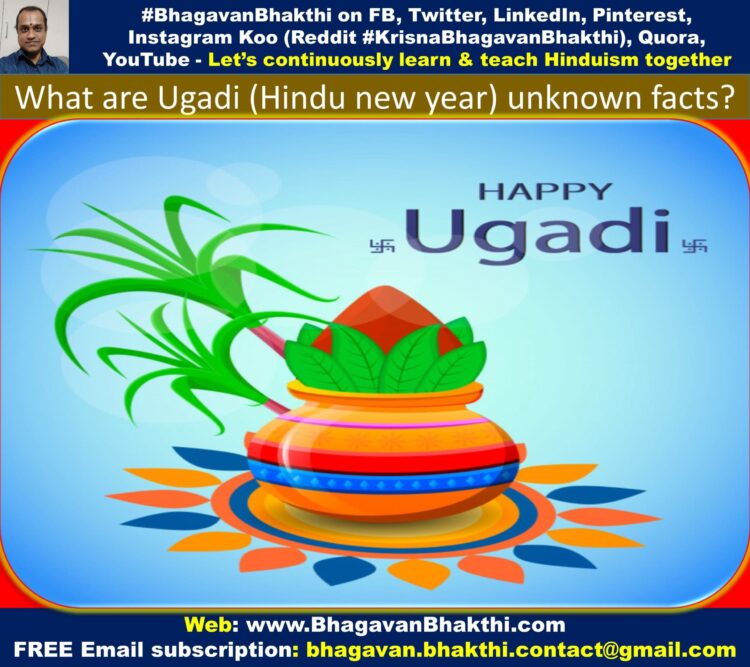 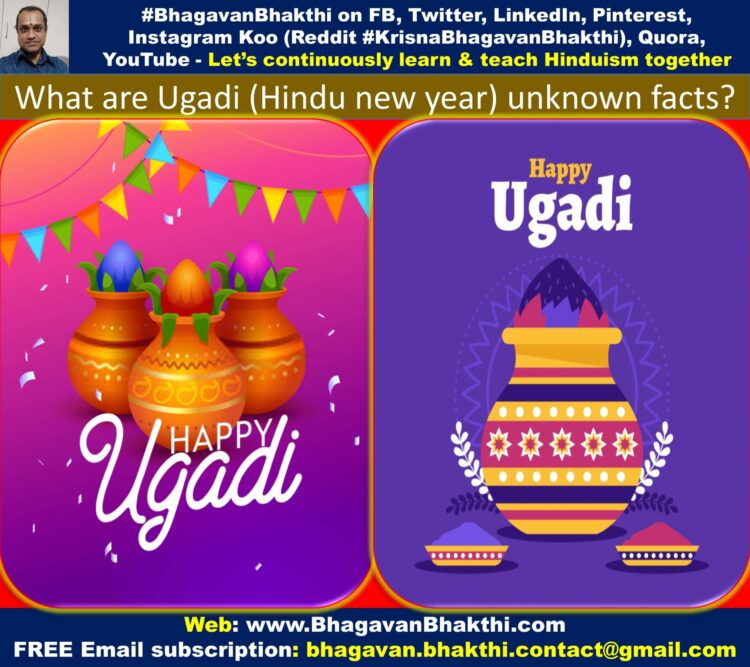 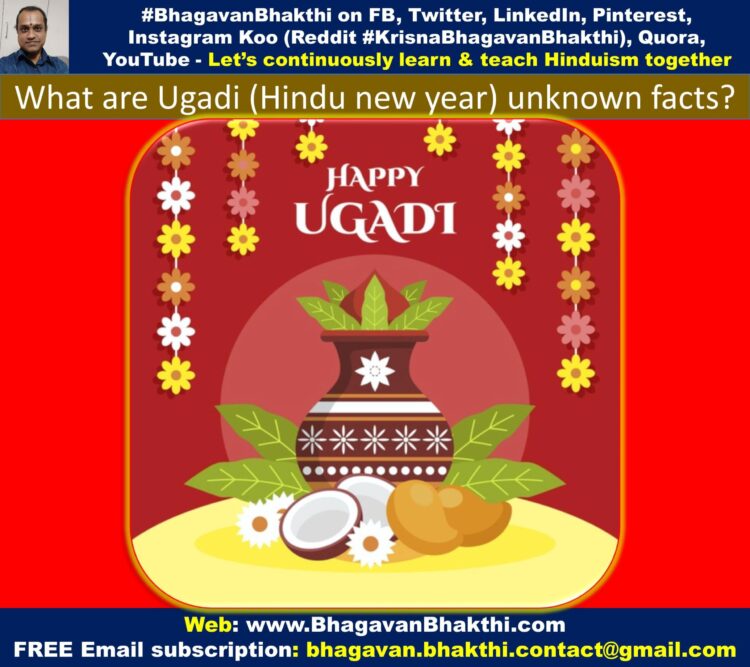 As per a popular legend, all these sixty names are said to have been related with the divine Devarshi Narada.

He is one of the Brahma Manasa Putras (son born from the mind of Sri Brahma Deva), Devarshi Narada is a great gnani / scholar, saint and Philosopher depicted as a Divine Messenger of the ‘triloka’ (three worlds).

In all the ‘Dharma kathas’ (stories as per Hinduism Shastras / scriptures) we usually find Devarshi Narada playing a pivotal role and his involvement in one way or the other is very important.

As per a legend, once upon a time Devarshi Narada caught in the mystery of Sri Maha Vishnu’s Maya (that is, illusion) added with a curse from Sri Brahma Deva, had to become a damsel with a desire to experience the materialistic life.

In the meanwhile, that Damsel marries a Raja / King and gives birth to 60 sons.

Later, as time passes Raja / King along with his 60 sons dies in a battle.

Suddenly, the grief stricken Damsel (Devarshi Narada) came out of illusion with Bhagavan’s mercy and realized, that it was the ‘Maya’ (illusion) of Bhagavan Sri Maha Vishnu.

In memory of Damsel’s (Devarshi Narada) sons and to give eternity to their names, Bhagavan Sri Maha Vishnu blessed them that henceforth, the sixty year cycle of Hindu time element will be represented by their names.

Ugadi signifies the current period, in which we are living as per the Hindu time element in a 60 year cycle, with each new year (Ugadi) denoted by an unique name starting from ‘Prabhava’ and ending with ‘Akshaya’.

This cycle will keep on continuing. 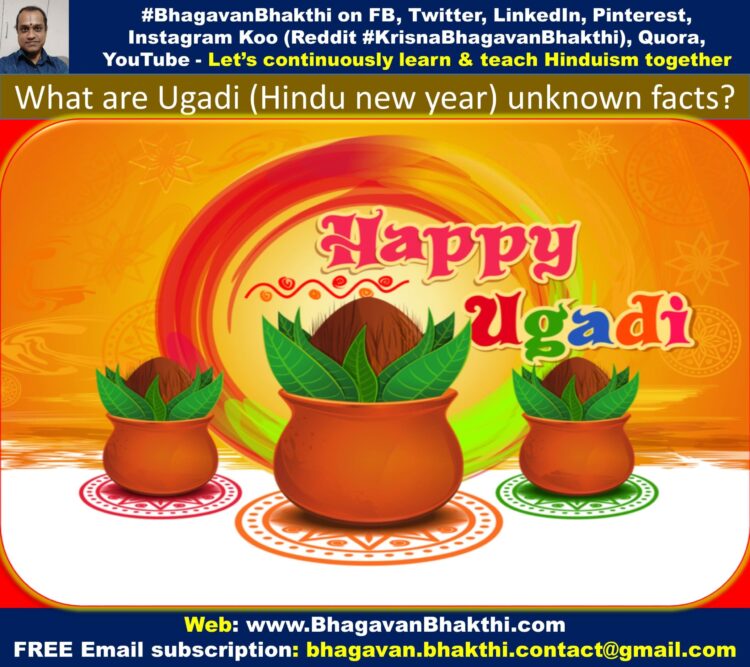 In few places of North India, people follow the calendar as per the ‘Vikrama Sakha’ and accordingly the commencement of New Year differs a little bit.

There, it starts from the first day of ‘Chaitra Bahula Paksha’ known as Baisakhi.

In Gujarat it will be from the first day of Kartika Maasam after Deepavali Amavasya.

Even in South India, where ‘Shalivahana Sakha’ is followed, commencement of the ‘New Year’ is observed on two different dates.

In case of Andhra Pradesh, Karnataka, Maharashtra and Goa, Ugadi is observed on the first day of Shukla Paksha in ‘Chaitra Maasam’ as per the Lunar Calendar known as Chaandramana.

In Tamil Nadu and Kerala, Ugadi occurs as per ‘Solar Calendar’ known as ‘Sauramana’, on the day when Sun enters into Mesha (Aries) Raashi which generally happen around 13th or 14th of April every year.

While it is known as Ugadi in Andhra Pradesh and Karnataka, it is called as ‘Gudi Padwa’ in Maharastra and Goa.

While in Tamil Nadu it is called as Puthandu festival, in Kerala it is known as Vishu festival.

It is a Hindu tradition to begin any new activity on an auspicious note especially, if it is coinciding with Ugadi. 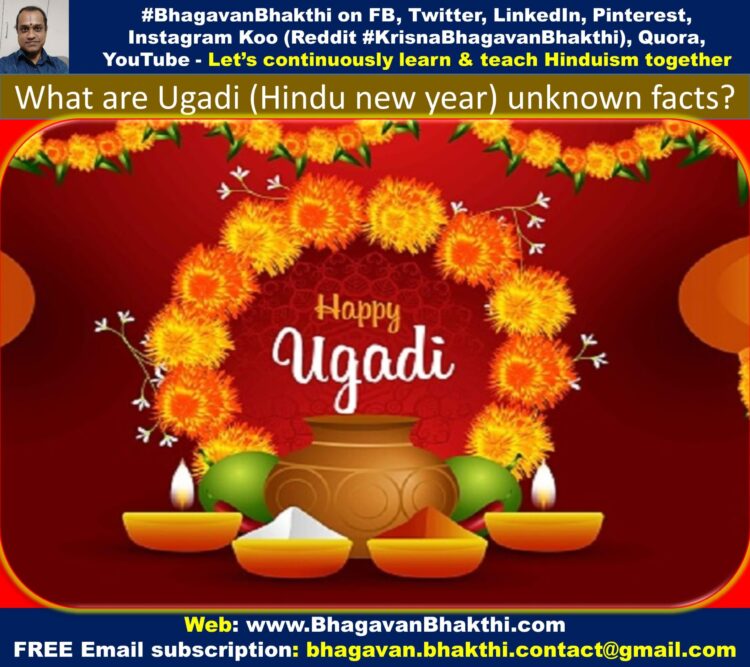 On this particular day, it is prescribed and it is very highly meritorious to perform ‘Thailabhyanganam’, Sun worship, ‘Nimba Kusuma Bhakshanam’, ‘Panchanga Shravanam’ etc.

To know the “Yugadi / Hindu new year, April Fools day and Roman new year relationship”, you can visit the below link: 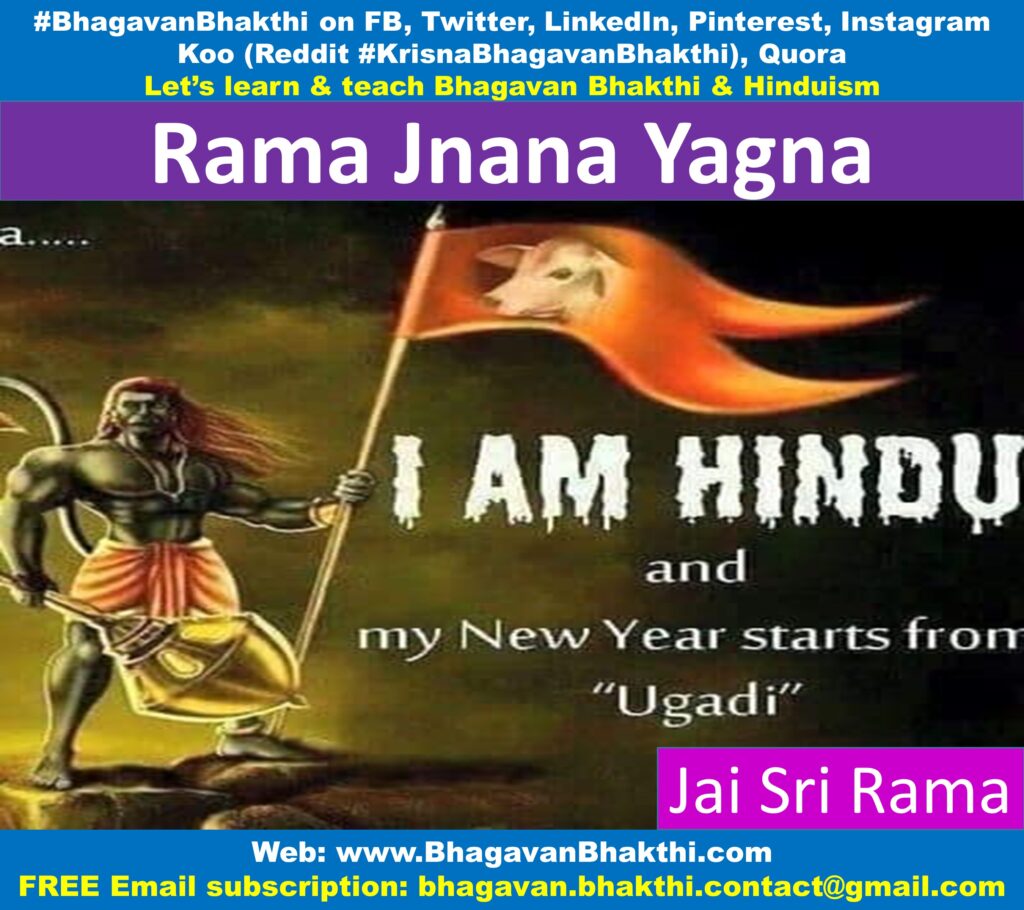