What are Yudhisthira unknown facts

Here Yudhi means, he is a person when in Yuddha / war, will be Sthira / stable, means someone who can’t be shaken or someone who is always stable (स्थिर / ಸ್ಥಿರ).

Yudhisthira used to be an absolute firm person in all situations and conditions. He was a person who always decided once to do something, used to do that particular work and also in given stipulated time.

His mind was always stable, firm and always convinced about his decisions. 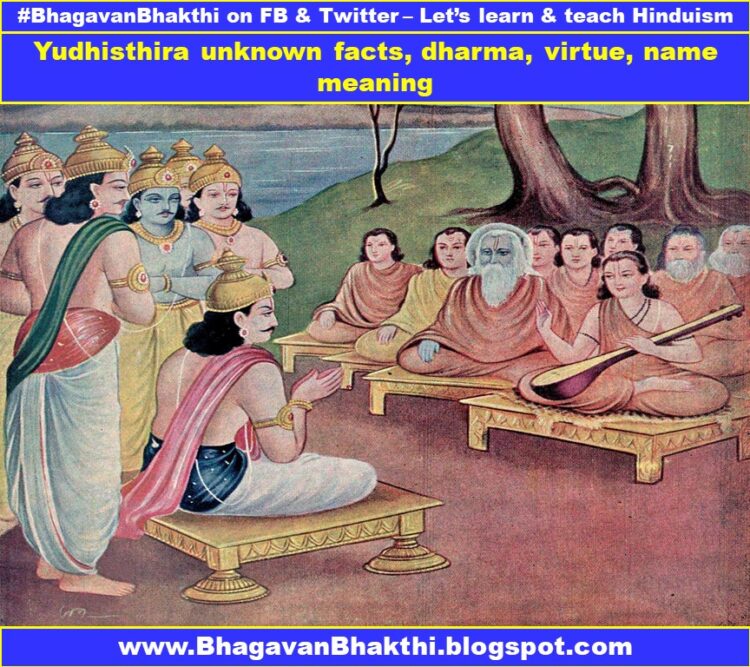 Yudhisthira and other Pandavas learning from Narada Maharshi about on how to rule a Kingdom with Dharma.

Few more great points about Yudhisthira are as below:

1. Yudhisthira was the man of virtue and goodness.

2. He never ever used to go against Dharma.

3. His another name is called “Dharmaraya” or “Dharmaraja”, means one who follows the GREAT SANATANA DHARMA.

4. With this name he had another name called “Ajaatashatru”, means one who don’t even have a single enemy at all.

5. Yudhisthira was highly learned person and also was a great warrior. He had mastered with the sphere fighting and chariot racing.

6. Also he had great knowledge about the political science, psychology, the GREAT SANATANA DHARMA Shaastra etc.

7. He was patient and adaptable. He never wanted the war and also tried to convince his uncle Dhritarashtra and his cousin brother Duryodhana.

8. He forgives the king of Viraat, although the king broke his nose. This happened, when Yudhisthira was continuously praising the Bruhannala (Arjuna) and not Viraat’s son Uttara Kumara.

9. Yudhisthira always respected his elders including his uncle Dhritarashtra and aunt Gandhari even after the GREAT war of Kurukshetra.

11. He almost respected each and every orders of Sri Krishna, except in few cases.

12. Tha shankha / couch of Yudhisthira was called as Ananta Vijaya. 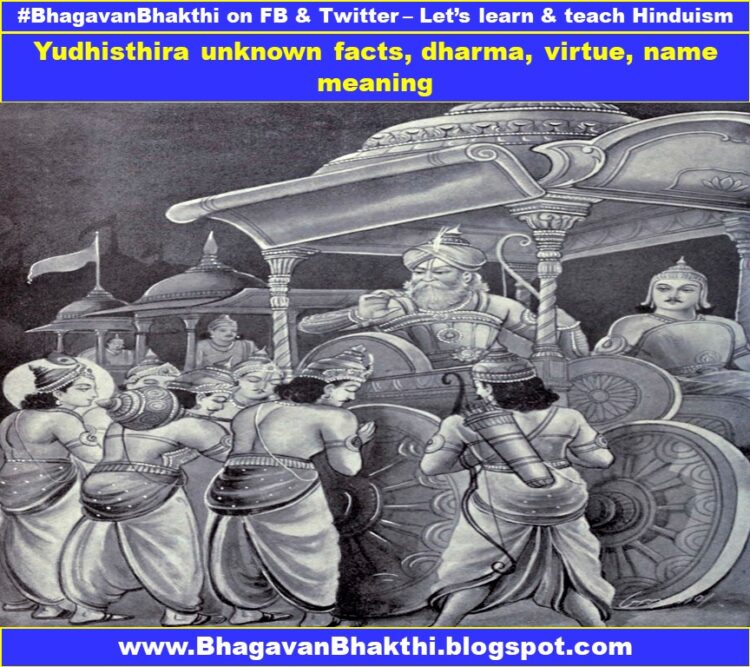 Yudhisthira and other Pandavas taking permission from Bhishma before the start of the Kurukshetra (Mahabharata) war.

Now let us know more information about the Yudhisthira and Pandavas:

It was the end time for all the Yadavas on this earth.

All Yadavas fought with each other and got killed.

Bhagavan Sri Krishna Paramaatma, after this phase of his life on earth went to aranyam (forest) for peace.

(Please remember this is only a vidambana done by Bhagavan Sri Krishna. He is known as “ananda”, means he himself is the root cause of ananda / happiness.)

(The biggest example is of the Pandavas. Pandavas, never were having lots of wealth. But still they were happy and satisfied throughout their lives.)

(Whereas, Duryodhana had wealth, money, gold, ornaments etc etc etc, but Duryodhana and his group were never ever happy in their lives.)

(Bhagavan Sri Krishna wished Pandavas to be happy, as Pandavas were in the path of Dharma.)

Let us continue with our main story now:

It got struck at the middle of the toe of the Bhagavan Sri Krishna.

Later Bhagavan Sri Krishna called the hunter Jara and told him that he was Bhrugu Maharshi (some people say he is Vaali, but it is incorrect) in his previous life.

After the physical body of the Bhagavan Sri Krishna Paramaatma left this earth all the pancha Pandavas along with Maata Draupadi Devi lost there interest in this material life and started moving towards the Himalayas.

With them was also a Swanam (Dog). After walking long-long distance all six started to feel the exhaustion. 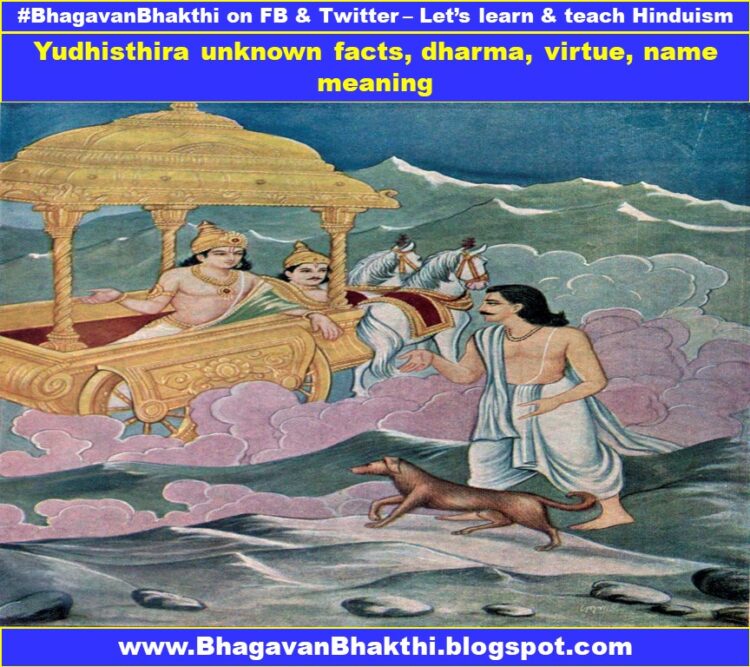 Indra Deva inviting Yudhisthira to get into his ratha to go to Svarga Loka (Heaven).

(Again this is also a vidambana. Pancha Pandavas and Sri Draupadi Devi are not ordinary people, but are avatars of different Devatagans).

(Yudhisthira – was an avatar of Sri Yama Deva.

Bhima – was the avatar of Sri Vayu Deva.

Arjuna – was an avatar of Sri Indra Deva.

Nakula and Sahadeva were the avatars of Ashvini Devatagans – twins.)

Thus Dharmaraaya lost all his brothers and Maata Draupadi Devi.

By this time Dharmaraaya had lost all his interest in life, but he did not lost Dharma.

Then after some time Sri Indra Deva came in front of Dharmaraaya along with his ratha (chariot) and asked Dharmaraaya to come inside the ratha.

Dharmaraaya along with his Svanam (dog) started to move inside the ratha.

But Sri Indra Deva insisted that no Swanams (dogs) are allowed inside his chariot or inside the Svarga Loka.

But the Dharmishtta Dharmaraaya / Yudhisthira told Sri Indra Deva that without this Swanam (dog) he won’t come along Sri Indra Deva.

Later Swanam (dog) took the shape of the Svayam Dharma itself (Sri Yama Deva) and told Yudhisthira that he has not lost his Dharma even at the end of life.

Thus Yudhisthira went to Svarga Loka and saw Duryodhana and other Kurus their. He also saw Dushasana, Shakuni and many such kind of people.

But Dharmaraaya was surprised that he was not able to see his Maata Kuni Devi, his wife Maata Draupadi Devi, his beloved younger brothers Nakula & Sahadeva. His very close brother Arjuna.

Also he was not able to see his Pitamaha Bhisma or his Guru Dronacharya or his elder brother Karana.

Dharmaraaya was in complete shock and surprised to see only the Kaurava clan and not his closest people.

Thus Dharmaraaya asked Sri Indra Deva, why only Duryodhana, the adhama (vile) and his brothers & his close friends & relatives are present and why his own people are missing.

Later, Sri Indra Deva ordered one of the Demi-God and told him to show where all the Yudhisthira’s people are.

That Demi-God took Yudhisthira to a place where only blood was flowing, where only bones were spread all over the place, where only hairs were scattered all over.

It was a place where the bad smell was present. Where skulls of all types of living beings were present.

Seeing all these, in Yudhisthira’s mind thousands of questions started to flow.

After thinking all these types of things, Yudhisthira turned on to the Demi-God and started to question him.

Then again that Demi-God changes his Pratiroopam into Dharma (Sri Yama Deva) and tells Yudhisthira that:

“Oh Great King, Oh Dharmishtta, Oh Dharmaraaya, My Son, you have again passed on the test which was conducted by Bhagavan Srimann Narayana”.

After this, Yudhisthira starts to see full of light around him. It started to be a blissful place, full of Demi-Gods and related people of Svarga Loka.

He sees all his brothers, Maata Draupadi Devi, Bhisma, and all his beloved people including the Kaurava brothers.

Now Narada Maharshi comes and explains to Yudhisthira that he has passed the test and in fact he is standing in the Swarga Loka.

Bhagavan Sri Krishna always tests his beloved bhaktas. Bhagavan tests more who like to follow the path of Dharma.

Similarly Bhagavan Sri Krishna leaves the hands of the ADharmis.

If we need Bhagavan Sri Krishna and his aashirvaada, we need to be in the path of Dharma and Bhakti and nothing else.

Similarly, if we want only enjoyment with out the Dharma and Bhakti path, then Bhagavan Sri Krishna and his aashirvaada will be away from us.

At the time of ‘Yaksha parshna’ incident after Dharmaraya (Yudhisthira) successfully answers all the questions posed by Yaksha Raja, Yudhisthira is asked as to who amongst his four brothers would he want to see alive.

Yudhisthira without a second thought or question says ‘Nakula, the son of Madri should come alive’.

When Yaksha Raja asks the reason for the same, Yudhisthira says that since he is alive and is the elder son of Kunti, one son of Madri should also be alive atleast as he be seen as partisan towards Kunit’s son.

Here Yudhisthira displays the highest standards of ethics because with just one year before the Mahabharata war, any lesser person would have been tempted to have the powerful Bhima or the great archer Arjuna alive, fight and win the war, but the great Pandava Yudhisthira thinks otherwise.

To know about “Why Krishna always helped Pandavas, you can visit the below link: