Namaste friends, how are your doing today? Bhagavan Sri Krishna blessings to you and your family!

Just before going to know about “Gau Pooja, Chintana, Vatsa Dwadasha, Savitri stotram”, let us know the meaning of the word Gau.

How to do Gau pooja, chintana and other significance 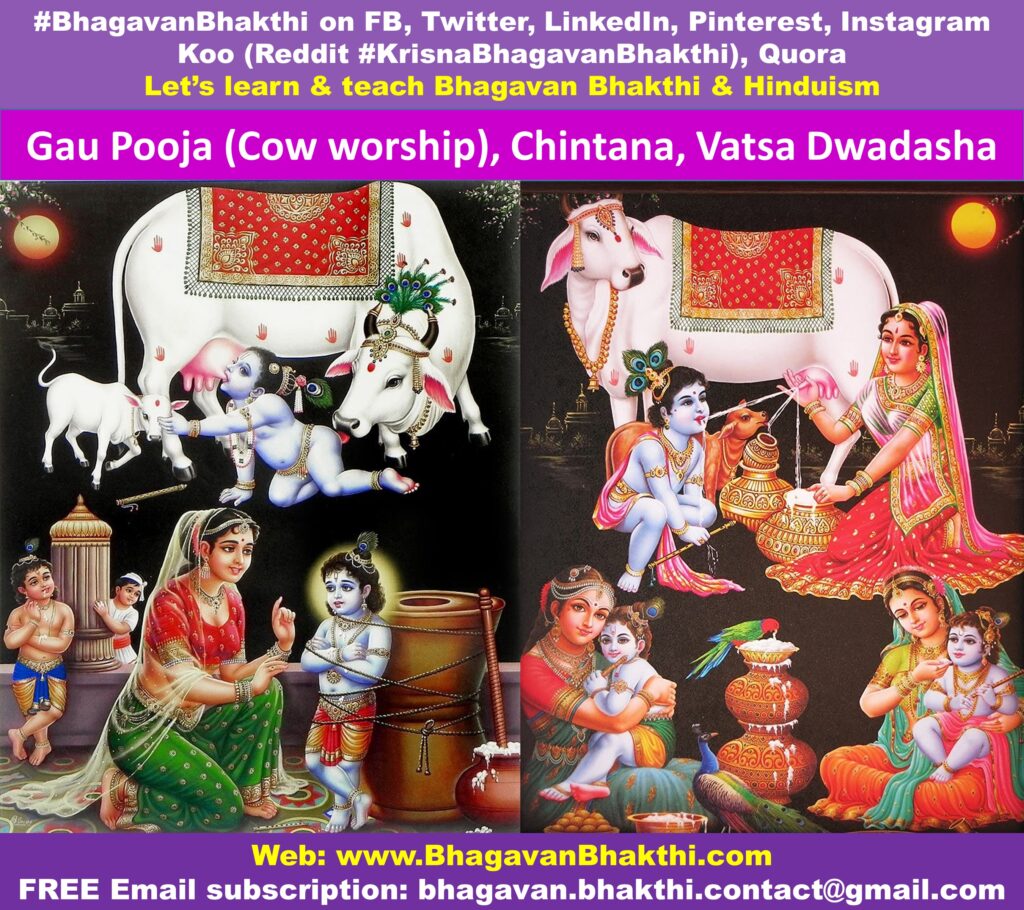 Meaning of the above names:

This this, Gau mata (Kamadhenu) is someone who always keeps on giving to human society and she never expects anything from us, even proper food.

Other names given to Kamadhenu is, she is someone who is called as a Sabala (spots present on her body) and Kapila (She is having red eyes).

Kamadhenu is always a giver and has zero expectations from humans. That’s why Gau mata or Kamadhenu is so divine and auspicious and yes, she is definitely ‘Great’.

We must all know in Sanskrit ‘Ananda / आनंद / ಆನಂದ / ānanda means, he is the someone who will always be in bliss, happiness, delight etc.

(Bhagavan Sri Vishnu is also known as ‘परमांनद / ಪರಮಾನಂದ / paramānanda’, as he is the one who is always be in ultimate bliss. parama + ananda = ultimate + bliss).

Thus, Nandini = Nanda + ini = Bliss + giver. Nandini is someone who always give bliss to everyone. 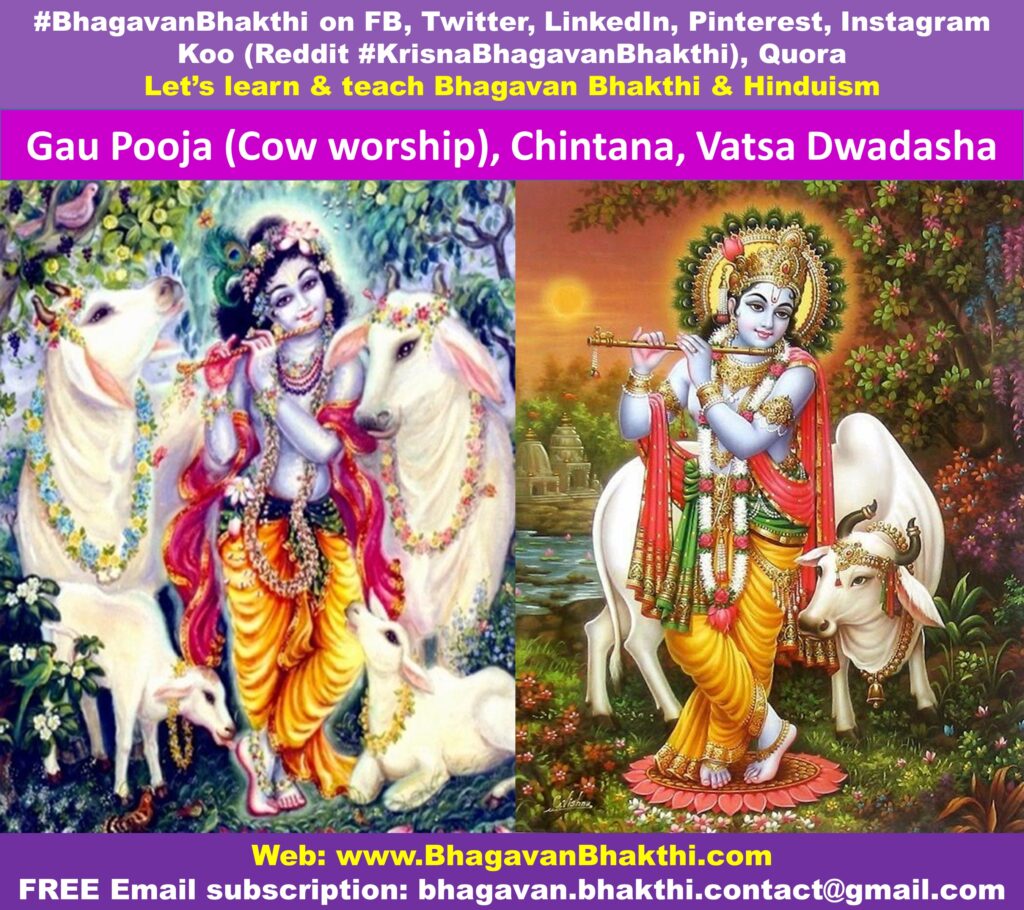 3. Surabhi (सुरभि / ಸುರಭಿ / surabhi): She is the one who is been donated / given by Devatas / Suras to Jamadagni Rishi. Surabhi = Sura + abhi = Devatas + Donated / given.

She is the one who is having an amiable temper and other good qualities throughout her life.

She is the one who is having very high moral and character. Susheela = su + sheela = Good / high + moral / character.

5. Bahula (बहुल / ಬಹುಲ / bahula): Here bahu + la = Abundant quantity + having / preserving / stored. She is the one who has different divine qualities in abundance.

Also, Bahula means, she is the one who stores divine milk in her body in abundance, so that she can donate it to others.

Now, let us move forward and let us know “How to do Gau pooja, chintana and other significance”:

Gau mata (Mother Cow) in Hinduism has a high symbol of righteousness (Satvika) since unknown time.

By doing Gau pooja (aradhana) one will definitely develops the ‘Satvika’ characteristics. 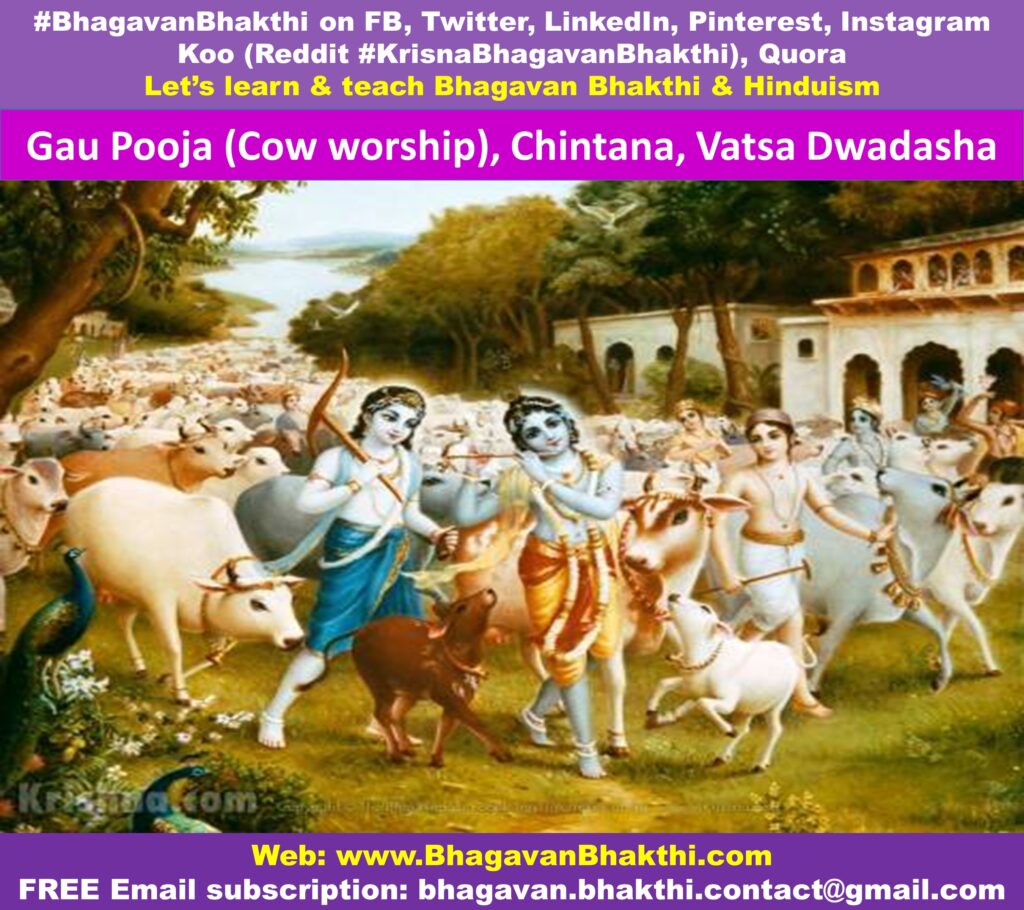 What does Gau pooja (aradhana) includes?

All the above mentioned are highly precious and dear to Bhagavan Sri Krishna / Vishnu.

Now, let us consider a shloka from the divine “Sri Vishnu Sahasranama Stotram”: 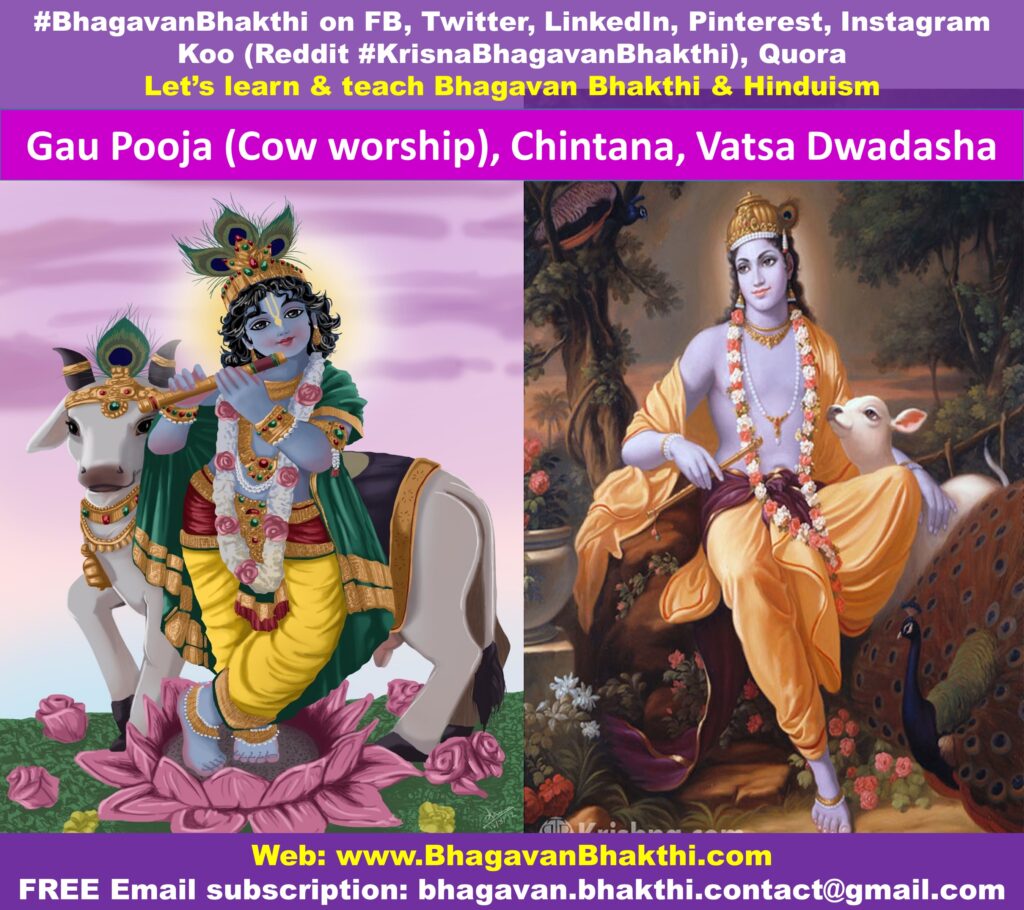 He (Bhagavan Sri Krishna) is the one who without hardship and with ease lifted the gigantic hill called Govardhana Giri (Hill) with His little finger to save and protect the Cows and Cowherds (Gopis and Gopikas).

Also He (Bhagavan Sri Krishna) is the one who is the protector of Earth.

Only Bhagavan Sri Krishna is divinely known as Govinda and also he is known as Gopala (The protector of cows).

Ashwayuja Bahula Dwadashi is reckoned as ‘GoVatsa Dwadashi’ and this day is dedicated in worshipping ‘Gau Mata’.

Bhagavan Sri Krishna is called as ‘Gau Vatsala’ and he is the one who shows ‘Vatsalya’ (love, warmth) towards Gau mata (Mother Cow).

Meaning of the above shloka:

My continuous and repeated namaste (Divine salutations) to the Bhagavan Sri Krishna, who is non other than the Para Brahma.

You (Bhagavan Sri Krishna) are the one who is the well-wisher of Cows and Brahmins.

You (Bhagavan Sri Krishna) are the one who is the helper of the whole universe. 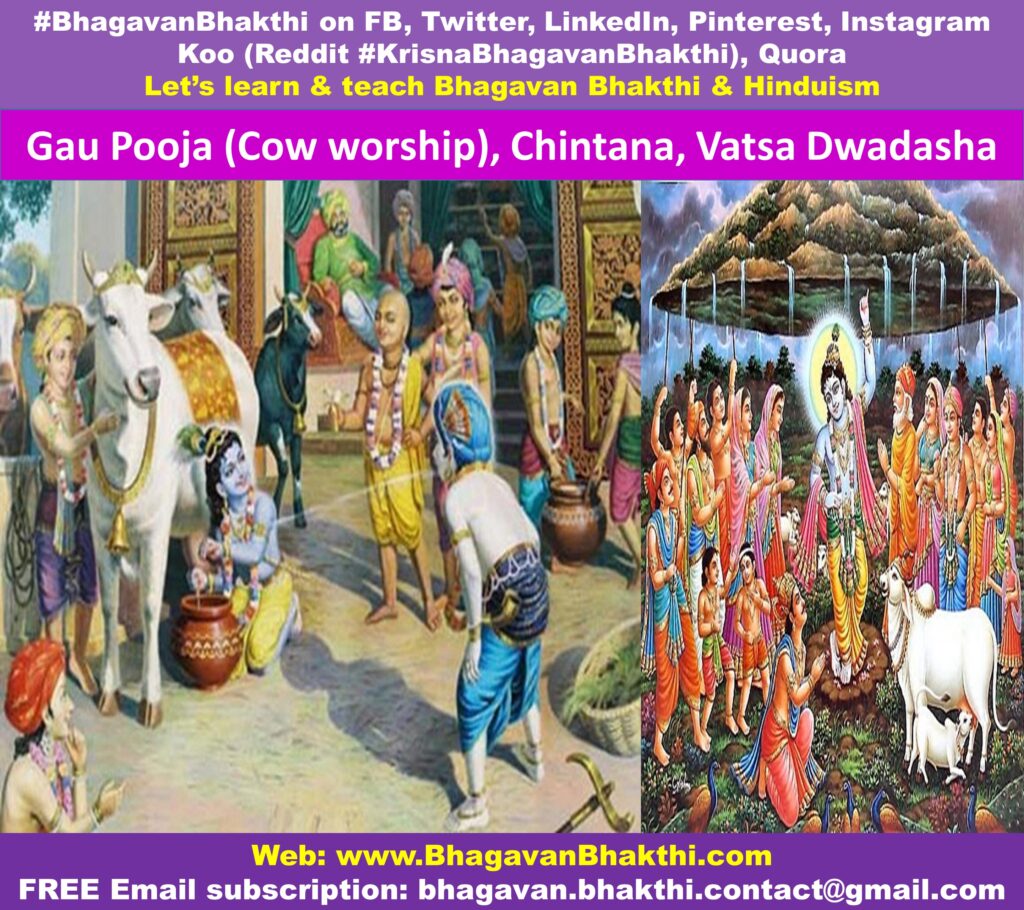 Meaning of the above shloka:

It is eternally believed that, all the Devatas / Demigods are present in the divine body of a sacred Gau Mata (Mother Cow) and is admired as a divine mata / mother in animal form.

Gau Mata, also called as Kamadhenu was emerged from the ‘Kshira Sagara’ at the time of churning. Gau Mata (Divine Cow or Dhenu) is considered as one of the Seven Mothers to be revered in the Vaidika Dharma.

To know about “What are the names of Sapta matrikas (Seven mothers), right meaning in Hinduism”, please visit the below link:

What are the names of Sapta matrikas (Seven mothers), right meaning in Hinduism

Now, let us consider the below divine shloka:

There are totally five products which can be obtained a nd extracted from a Cow.

They are as given below:

Since the ‘aadi kalam’ (Grand unknown time), Pancha Gavya (पांच गव्य / ಪಂಚ ಗವ್ಯ / pan̄ca gavya) is been used in all the ceremonies in Hindu Sanatana Dharma.

Even today, Pancha Gavya (पांच गव्य / ಪಂಚ ಗವ್ಯ / pan̄ca gavya) is used in Hindu families to purify self physical and mental body, as well as to sprinkle it all across the house after ‘ashoucha’ (Unhealthy, impure etc works).

In today’s modern times, multiple R & D is going on in Ayurvedic science on the healing properties of Pancha Gavya (पांच गव्य / ಪಂಚ ಗವ್ಯ / pan̄ca gavya), as it is a natural medicine for curing numerous diseases.

Go-Padma Vrata is one of the austerities advised for ‘Chaturmasya Vrata’ (Four months of Vrata).

This divine vrata is devoted in the worship of Gau Mata / Mother Cow during the four holy months of ‘Chaturmasa’ starting from ‘Ashada Shukla Ekadashi’ and ending on ‘Kartika Shukla Dwadashi’.

4. Drawing a picture of Gau Mata / Mother Cow & Calf and

Once upon a time, the divine beautiful dancer Rambha was dancing in Lord Indra Deva’s court.

Music, dance and all most everything was going on perfectly and wonderfully in the Lord Indra Deva’s court.

But, suddenly a musical drum was cracked and broken, and thus the rhythm went wrong.

Lord Indra Deva requested Lord Yama Deva (The god of Death), to get the musical drum reconstructed using the skin of a living being who never practiced a vrata / divine vow.

Thus, Lord Yama Deva and his men went in search of people who never practiced the vrata / vow in the correct way.

Lord Yama Deva and his men came back and told Lord Indra Deva – Ganga has a rangoli, Gauri has a rangoli, similarly Savitri, Draupadi, Anushya, Arundhati and Saraswati too have rangolis.

But for our surprise, there is no rangoli at Bhagavan Sri Krishna’s sister Subhadra’s house.

Thus Lord Indra Deva ordered to bring back Subhadra, cut her skin and fit it to a drum.

After waking up in the morning, Bhagavan Sri Krishna went to Subhadra’s house and asked her “why she have you not drawn a rangoli in front of your house and not observing the vrata”.

Thus Subhadra replied, “I have brothers like Lord Indra Deva and Lord Chandra Deva, a husband like Arjuna, parents like Vasudeva and Devaki and of course you, Bhagavan Sri Krishna, then why should I draw rangoli in front of my house?”.

Bhagavan Sri Krishna his sister Subhadra Devi, that inspite of all these great relationship, she must always draw a rangoli in front of her house that have an eagle, the feet of Bhagavan Sri Vishnu, Sankha, Chakra, Mace, Lotus, Swastik, Brindavana, Flute, Lute, Drum, Gau Mata (Mother Cow), calf and thirty-three (is it a numerical symbol for the thirty-three crore gods) lotus symbols, Rama’s cradle, Sita’s sari end, Tulasi leaf, Elephants and Guards.

This rangoli must and should be drawn outside cowsheds, similarly in near sacred rivers and ponds, also in front of God’s images and Tulasi brindavana.

Thus, Subhadra obtained hard rock from a hill and mixed it with pearls and corals and made powder of them and drew the rangoli.

Subhadra drew all rangolis due for five years in just one year.

Subhadra escaped the punishment of gods and they finally found an elephant calf that was sleeping with its head towards north.

Lord Yama Deva’s soldiers took the skin from the back of the animal and made the drum.

Gau-Savitri Stotram is taken from the great epic Mahabharata (Bhishma – Yudhishtira samvadam / discussion) – Stotram is given in three languages, that is, Sanskrit, Kannada and English.

To know more about Gau Mata (Mother Cow), kindly visit the below link: