What is Hierarchy (Taratamya) meaning in Hinduism (Is Hierarchy good or bad to humanity?)

In Bharata (India) there are different sampradayas / traditions exists from north Kashmir to south Kanyakumari and from west Gujarat to east Arunachal Pradesh.

There is no similarity between two sects and traditions not only in India, but in the whole world too. 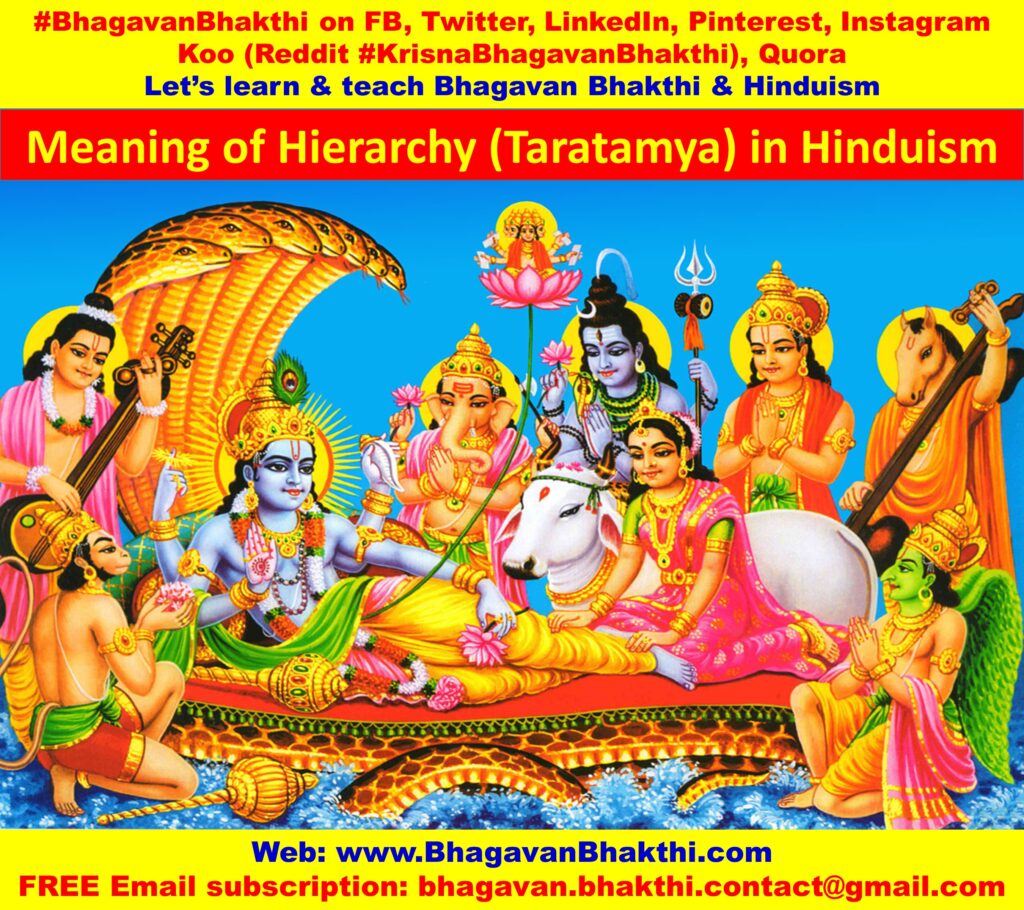 One person talks very fluently and another person has problems in talking fluently.

A child who is just 5 years old, starts singing like an experienced singer, while someone who is practicing singing for 10 years, that person won’t be able to sing in the right tune.

One student, every year scores 90+ in all the exams, while another student won’t be able to score even 50+ in his / her exams.

Someone will be very much interested in doing acting, while someone else wants to be a dancer.

Similarly, one person eats a lot and another person get tired of eating even a little bit.

One girl runs very fast, whereas a boy can’t even walk fast.

In the same way, one boy makes different face expressions, whereas another girl likes to play guitar.

There are ‘n’ number of examples to give like this…

Hierarchy or Taratamya means differentiating someone as per one person’s capability. Few people give meaning as discrimination for Hierarchy or Tatatamya which is completely incorrect. 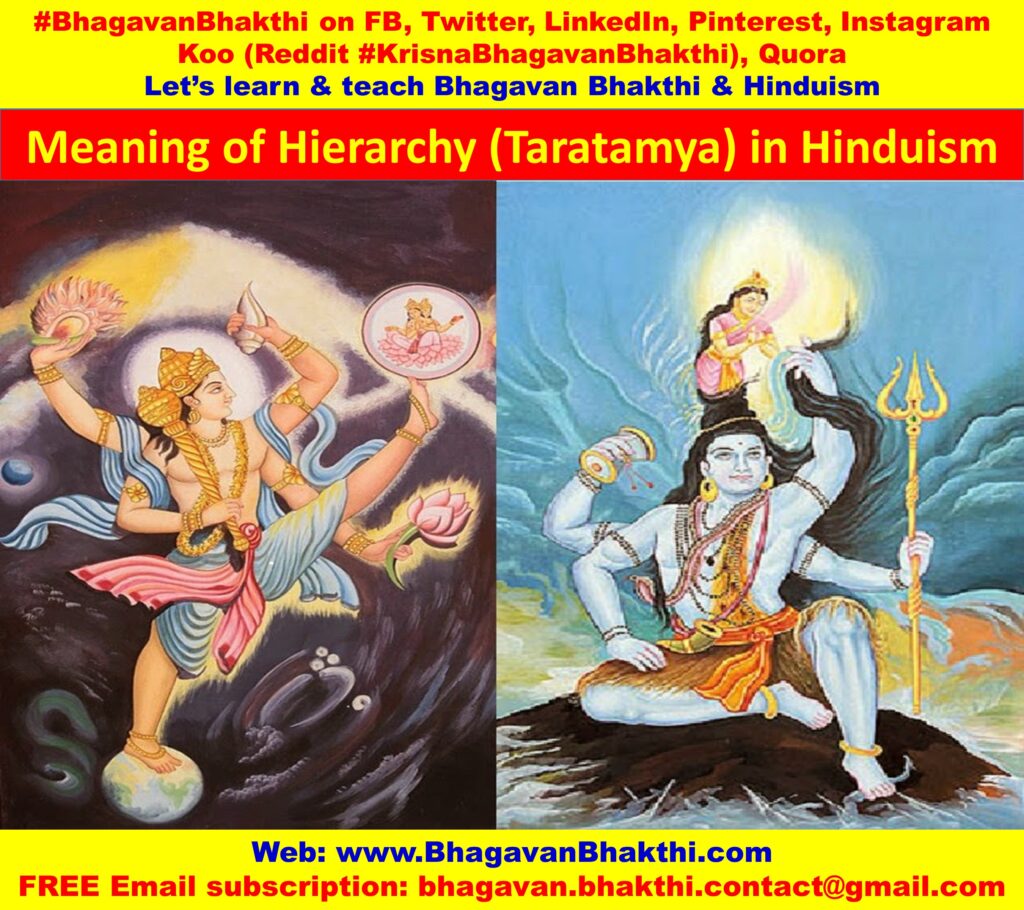 Thus with the above explanation we should be able to understand that:

Now, let us move towards materials (matter) which are available in the markets:

Just think there are 4 different models A, B, C and D of cars of the same company.

A family of 4 persons W, X, Y and Z will visit a showroom where all these A, B, C and D models of cars are displayed and are kept for sale.

All the four W, X, Y and Z will like different models.

This is because all the four are unique and have their own taste.

This clearly shows that materials (matter) which are available in the market is not same for all.

All have their own way of thinking and every person’s taste is different and unique.

This also shows that the models A, B, C and D which are kept for display are four different and unique models and all the four models are different and has their own style, technology, color, shape, etc.

This is what our Bhagavan Sri Vishnu says in each and every grantas (Hindu divine books). 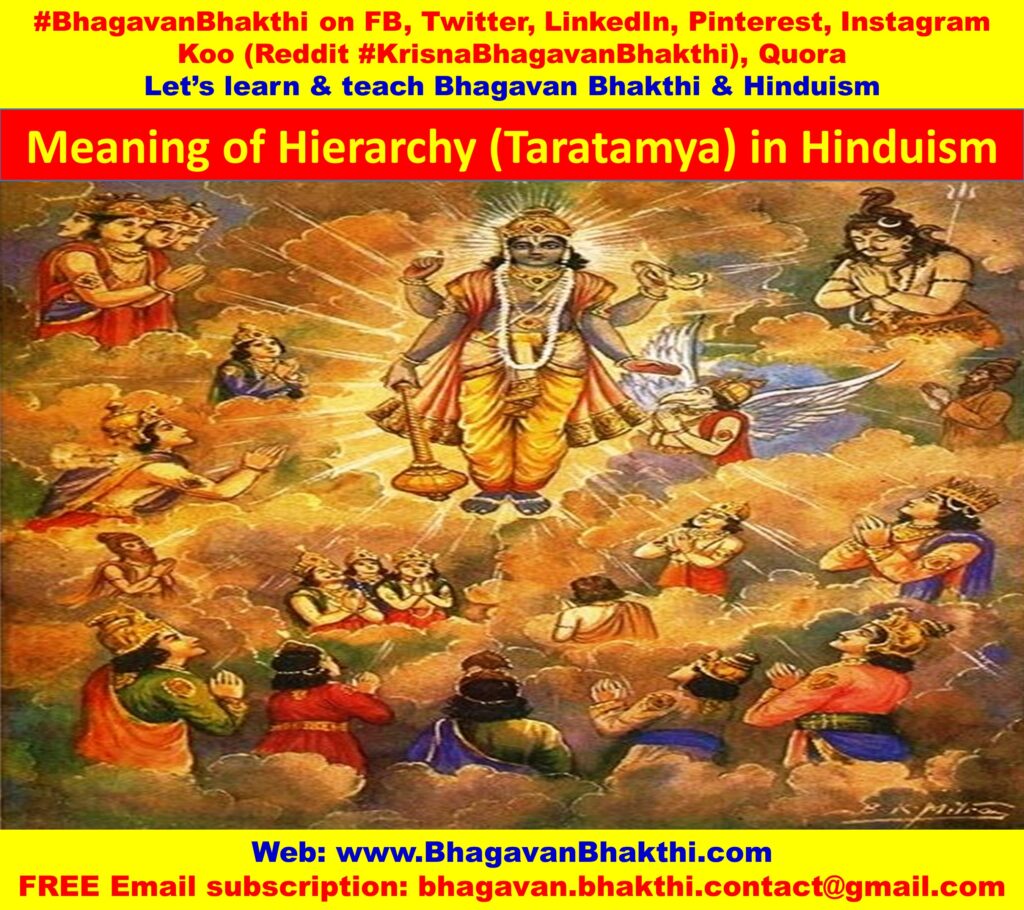 Now let us take a shloka from Bhagavad Gita:

chatur-varnyam = The four varnas / divisions of human society; mayaa = Done by Me (Sri Krishna); srstam = Created; guna = quality; karma = Karma; vibhagasah = In the form of division; tasya = Of that; kartaram = The father; api = although; mam = Me (Sri Krishna); viddhi = you may know; akartaram = As the non-doer; avyayam = Being unalterable.

I (Sri Krishna / Vishnu) have created four Varnas, that is, Brahmana, Kshatriya, Vaishya and Shudra based on the Karma and deeds of Jeevas (living beings). And, although I am the creator of these four varnas, you should always remember that I am (Sri Krishna) yet the non-doer and being unalterable.

A great saint of Sri Madhwa (Dvaita) Sampradaya, Sri Raghavendra Swamy has given an extensive explanation for this shloka with the help of Sri Madhwacharya Ji’s commentary.

This Varna system explained is not limited to only India, but is applicable to the entire humanity.

On the outward way it may look like Bhagavan Sri Krishna has created these four varnas, that is, Brahmana, Kshatriya, Vaishya, Shudra.

But Sri Madhwacharya Ji says this classification is not based purely on the body, but is based on aatma / soul.

Many of us know that aatmas / souls have been widely divided into three, that is, Satvika, Rajasa and Tamasa.

Satvikas include all the Devatas / Demigods.

Tamasas include the Asuras and lowest level of humans.

And again amidst these, Rajasa-Satvika group is divided into chaturvarnya i.e, Brahmana, Kshatriya, Vaishya and Shudra in Bhagavad gita.

If an aatma / soul (with the combination of Rajasa and Satvika) has greater (too high) ‘Satvika guna’ than ‘Rajasa Guna’, then he will be called as a Brahmana.

If ‘Satva Guna’ is a little more than ‘Rajasa Guna’, than he will be called as a Kshatriya.

If ‘Satva Guna’ and ‘Rajo Guna’ are equal in quantity, then he will be called as a Vaishya.

If ‘Rajo Guna’ is higher than ‘Satva Guna’, then he will be called as a Shudra.

This is the correct meaning of Chatur Varna as per Hinduism / Sanatana Dharma.

The above explanation clearly shows that all are unique and each and everyone has his / her own occupation as per his / her likings and capabilities. 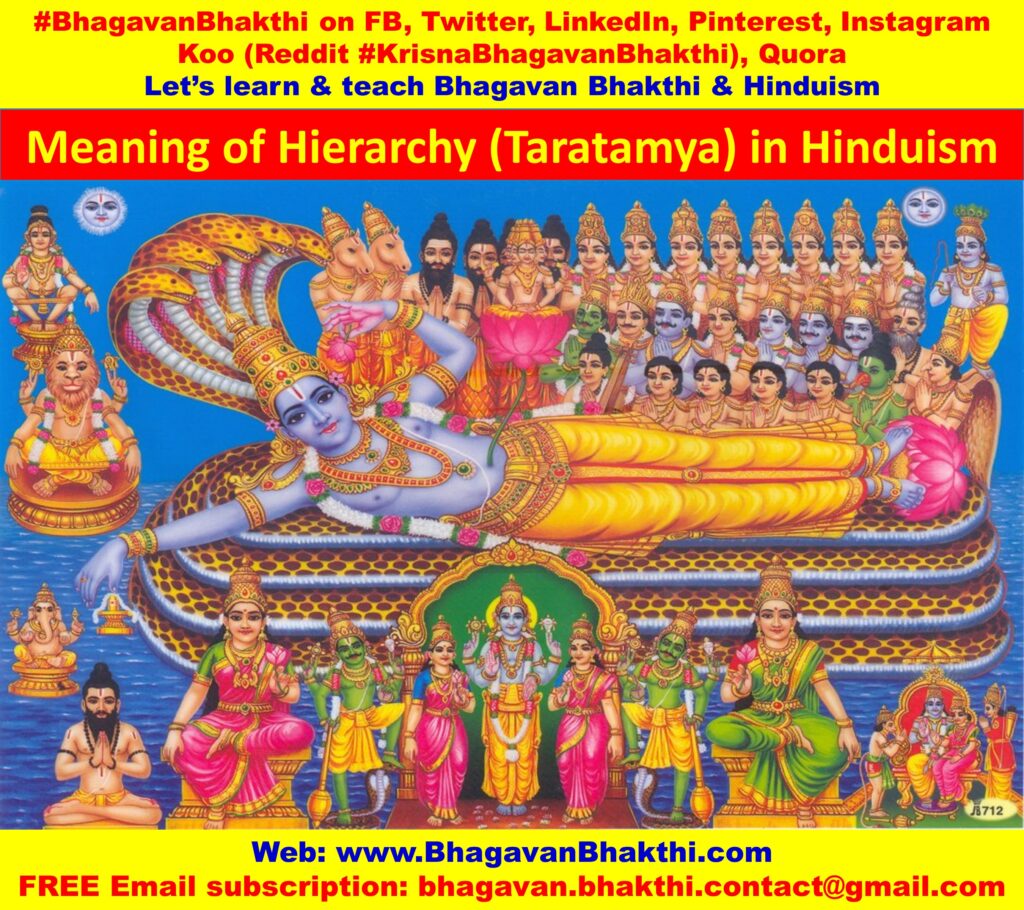 Thus the main five basic, eternal and real differences which are explained in Hinduism is as given below:

1. There is difference between the individual soul (or jīvatma) and Brahmatma (Ishvara / Vishnu).

2. There is difference between material (matter) and Ishvara / Vishnu.

3. There is difference among individual souls (jīvatma) – All are unique and different.

4. There is difference between material (matter) and jīva (individual).

5. There is difference between among various types of materials (matters).

We should always think in the right way. This post is not promoting discrimination, but wants to celebrate and promote the uniqueness of individuals.

Uniqueness starting from Bhagavan / Ishwara / Vishnu and other Devatas (Demigods):

Similarly there is uniqueness starting from the Bhagavan / Ishwara / Vishnu and other Devatas (Demigods) too. Let’s understand how? 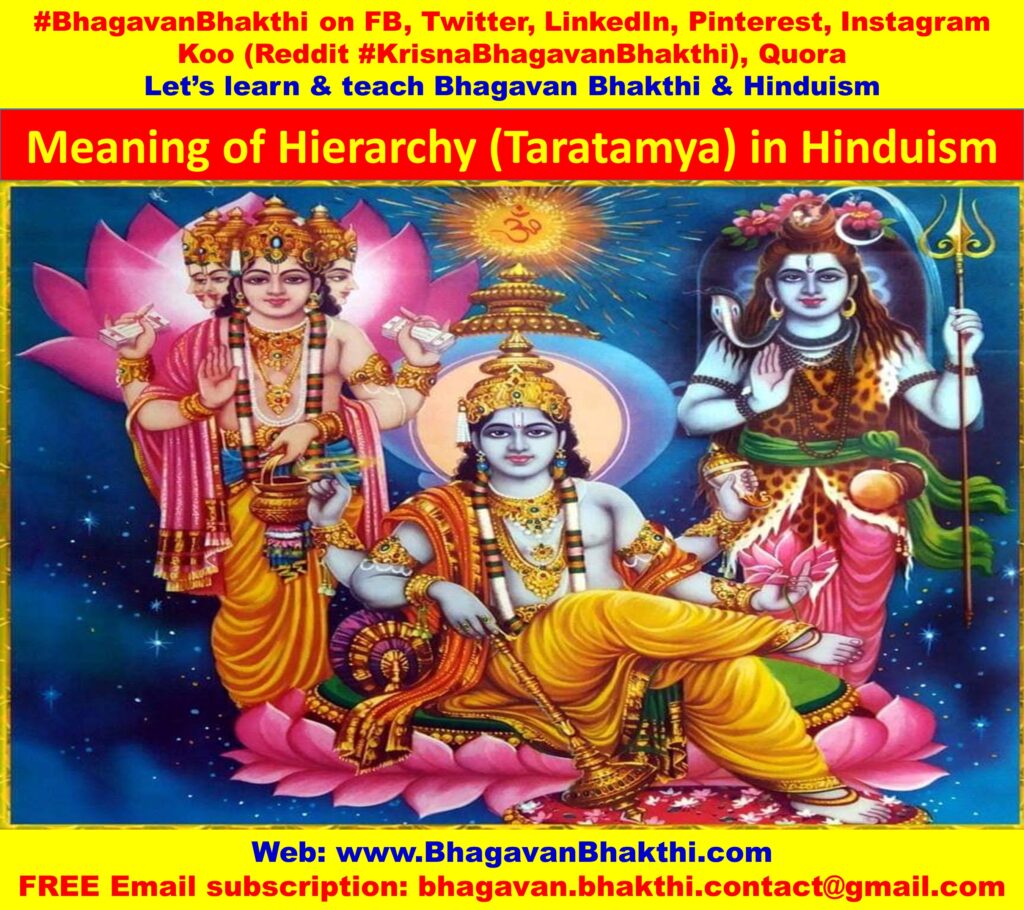 1. Bhagavan Sri Vishnu – Sri Hari / Narayana / Krishna / Rama and all his avatars are same and he is the Sarvottamma / Supreme.

2. Sri Maha Lakshmi Devi – She is called as ‘Nitya Mukta’, that is, she has received the Mukti (Divine liberation), since the ‘aadi kalam’ (Grand first unknown time) and will be in the Mukti phase until the ‘ananta kalam’ (Grand infinite time).

4. All the Rujus’ consorts, that is, Sri Saraswati Devi / Sri Bharati Devi

6. ‘Shan Mahishis’ (Six consorts) of Bhagavan Sri Krishna, that is,

8. a) Sri Indra Deva (His name is called as Purandara)

15. a) Maharshi Bhrugu (He is best among all the Maharshis)

g. All the Rishis,

h. All the Vishnu Parshadas

i. All the Gandharvas

k. 7 Pitrus, that is, they are called as ‘sapta pitru devatas’ (Also called as ganas). There names are Yama, Soma, Kavyavahana, AgniShTAta, Aryama, Anala, BarhiShat).

l. All the Manus

m. All the Indras (Not the Svarga loka Indra Deva)

o. All the Archara Marga Devatas

p. All the Dhoomaadi Maarga Devatas

q. All the Grahas

s. All the Dik-abhimani Devatas

t. All the Ab-abhimani Devatas

u. All the Vahanas (mounts) of Devatas

b) Sri Ganga Devi (Consort of Sri Varuna Deva) – The most sacred and divine river on earth.

24. a) Sri Devaki Devi – Mother of Bhagavan Sri Krishna (She is same as Sri Aditi Devi)

ii. All the Deva Bhrutya Pitrus (Total 100 in number)

iii. All the Deva Bhrutya Asuras (Total 100 in number)

iv. All the Deva Gaayana Gandharvas (Total 100 in number)

v. All the Deva Nrutya Apsara Devis (Total 100 in number)

vii. All the Vahana carriers YakSharas (Total 70 in number)

viii. All the Shibika carriers RakShasas (Total 30 in number)

x. All the Sevaakarta Bhutas (Total 70 in number)

xi. All the Kinnaras (Total 70 in number)

xii. All the Pishachas (Total 70 in number)

xiv. All the Pretas (Total 70 in number)

xv. All the Vidyadharas (Total 70 in number)

28. All the Chira Pitrus

29. All the Deva Gandharvas

30. All the Manushya Gandharvas

32. All the ManushyOttamas
i. Nara

There are 100 Somarasa Paanaarhas and their names are as given below:

i. Urukrama (Kaksha 1 – One among Adityas – Avatar of Bhagavan Sri Hari)

iv. Sri Indra Deva (Kaksha 8 – One among Adhityas – His name is Purandara)

vi. Bruhaspati (Kaksha 10 – He is the Guru of all the Devatas)

a. Ashta Vasu (Total 8 number — one appear in other kaksha)

vi. Dyu (He takes avatar as Bhishma during the Mahabharata period)

b. Ekadasha Rudras (Total 11 numbers — one appear in other Kaksha)

i. Bhima (Not the Bhima of Mahabharata)

Of these 5 Adityas appear in Uttama (higher) Kaksha:

One appear in Adhama Kaksha:

ii. Sri Bharati Devi husband Sri Mukhya PraaNa Deva has 5 roopas with the same 5 names and those shouldn’t be confused with Daasa PraaNas.

e. Vishvedevatas (Total 10 in number – All appear in this Kaksha)

i. Naasatya (Same as Nakula of Mahabharata and Meinda of Ramayana)

ii. Dasra (Same as Sahadeva of Mahabharata and Vivida of Ramayana)

g. Others in this Kaksha (Total 2 numbers)

In Kaksha 20: Parjanya – One among Adityas

Others are Shata Punya Shloka Rajaas