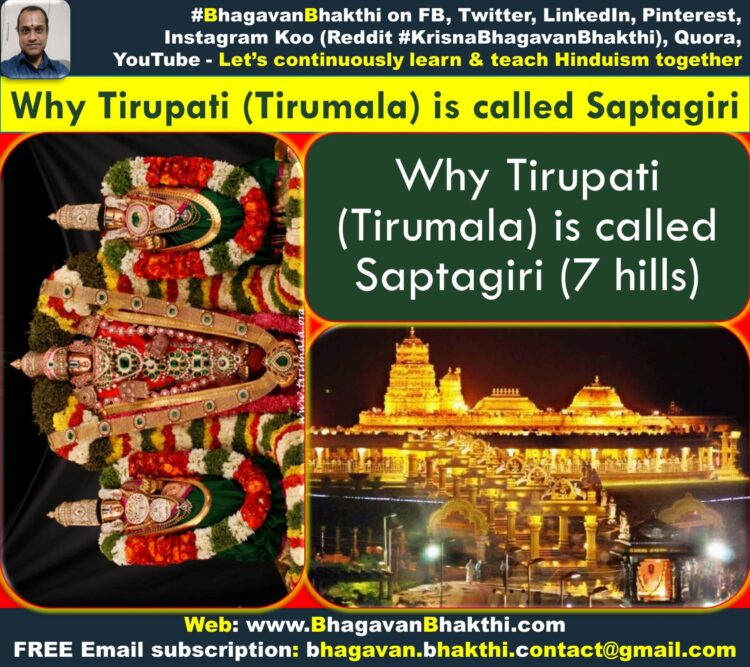 Bhagavan Sri Vishnu came down as Bhagavan Sri Srinivasa / Venkatesha to get marry to Sri Padmavati Devi, which he had promised to do so in the Treta Yuga, that is, as an avatar of Bhagavan Sri Rama.

First of all let us know what is the meaning of ‘Giri’, ‘Achala’, ‘Adri’ and ‘Parvata’ is?

a. What is Giri? – Giri means a rocky mountain. Bhagavan Sri Krishna is called as ‘Giridhara’, as he lifted the huge rocky mountain of ‘Govardhana’ to save the people of Gokula from the clutches of the heavy rain which was poured by Sri Indra Deva. 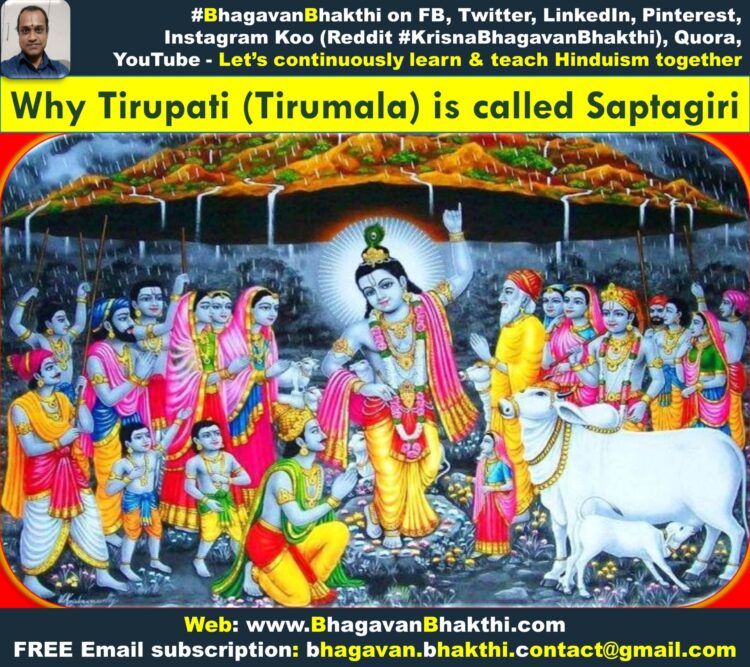 b. What is ‘Achala’? – Achala means, something which is immobile. Achala also has the meaning, which is very steady, constant, absolute still etc. A hill or a mountain is always immobile. Thus a hill or mountain is called as ‘Achala’.

c. What is ‘Adri’? – Adri also means a hill or a mountain. The great Himalaya is called as ‘Adrisha’, as it is the ‘King of all the mountains and hills’. Adrisha = Adri + Isha = Mountain + Head or King.

For this reason, most of the divine temples are located on top of the mountains and hills in India.

As said above Sri Parvati Devi is the daughter of Parvata Raja and thus, she got the name Parvati. Parvati also means highly auspicious, divine, favourable, etc.

Now, let us move to know about “Why Tirupati (Tirumala / Tirumalai) is called Saptagiri Kshetram?”:

Tirupati is known as the ‘भूवैकुंठ / ಭೂವೈಕುಂಠ / bhūvaikuṇṭha’ (BhuVaikuntha), that is, this place is so divine this place is called as the Vaikuntha of the earth.

In this place itself, the most divine vivaha (Marriage) of Bhagavan Sri Vishnu’s avatar Bhagavan Sri Srinivasa / Venkatesha with Sri Padmavati took place.

Tirumala Kshetram (Pilgrimage place) is the most holy abode of Bhagavan Sri Srinivasa / Venkateshwara and it is located in the midst of a group of seven divine hills called Saptagiri.

Tirupati (Tirumala / Tirumalai) is called Saptagiri Kshetram because of the following seven mountains: 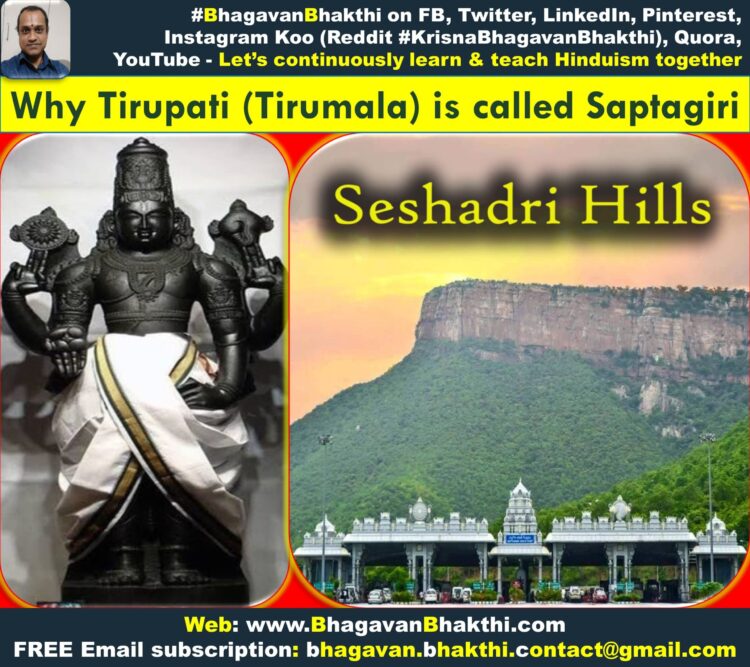 In Sri Venkatesha Stotram (That is, from Brahmanda Purana) we can find Bhagavan Sri Venkateshwara is been eulogized as “Sheshadri patih eva cha”.

As said above, Tirumala or Tirumalai hills is the holy and most divine abode of Bhagavan Sri Venkateshwara is said to be manifestation of Sri AadiShesha serpent. Thus, this place is called as Sheshachalam / Sheshadri.

Most special point to be noted here is, from a far distance Tirumala hills appear in a form of a serpent.

How Sri AadiShesha serpent got manifested at Sheshachala hill and how he was brought down by Sri Vayu Deva can be found in Sri Venkatachala Mahatmya.

Lord Sri Garuda Deva is the one who brought these saptagiri (7 hills) from Vaikuntha to earth.

This saptagiri (7 hills) doesn’t belongs to earth. But infact, it was brought from Vaikuntha by Lord Sri Garuda Deva and thus the name Garudachalam / Garudadri. 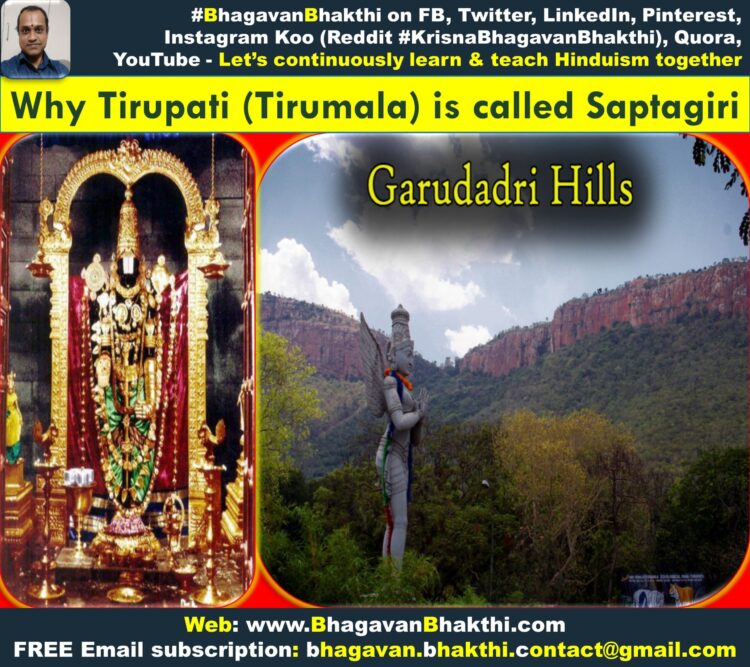 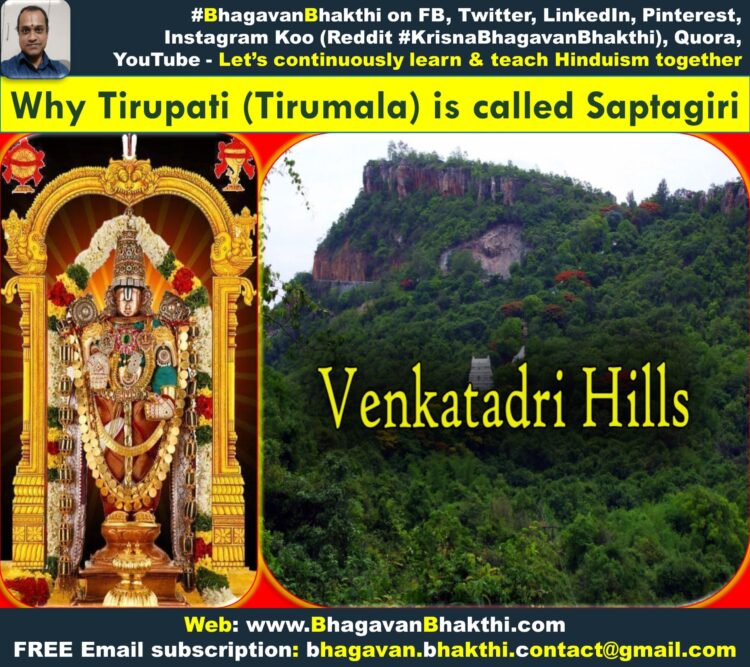 Thus this means, this is the hill (adri) where Bhagavan Sri Venkatesha is permanently located and he is so great and divine that he cuts down (burns) our ego or sins forever.

Here, Venkata also means, He (Bhagavan Sri Venkatesha) is someone who is the treasure house of all the divine knowledge, that is, 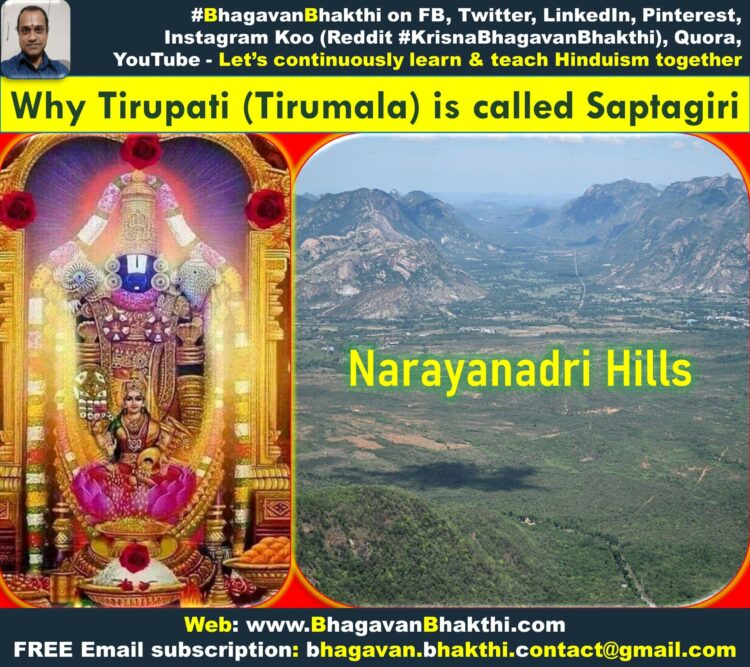 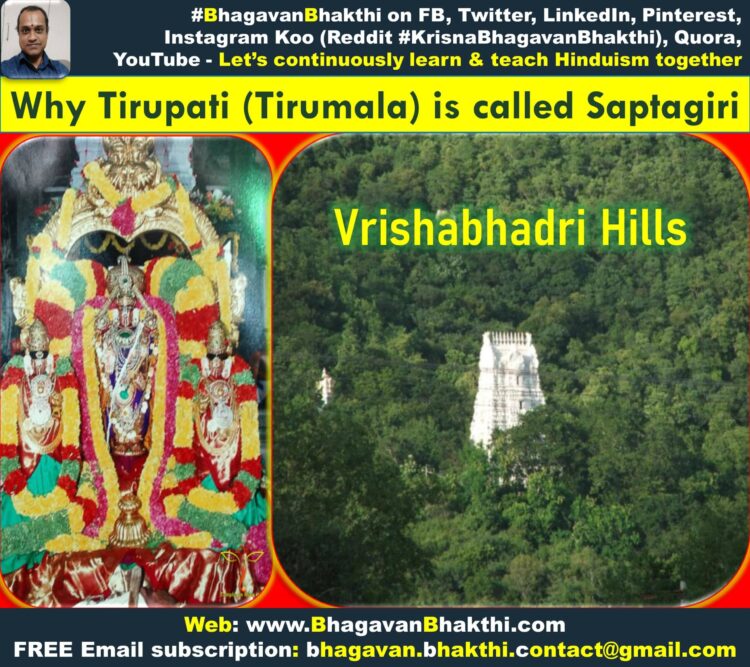 She is the divine mother of Sri Hanuman. She did a tapas / penance at this place and thus the name Anjanadri. 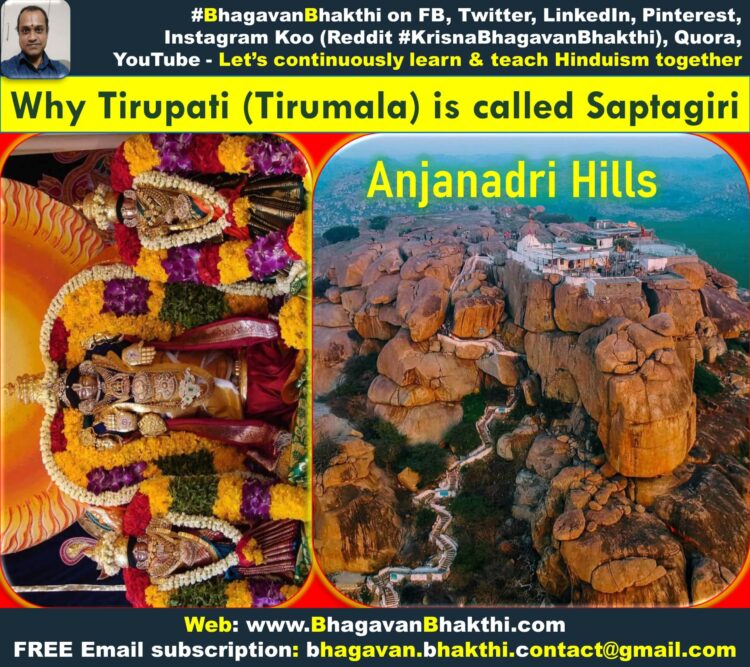 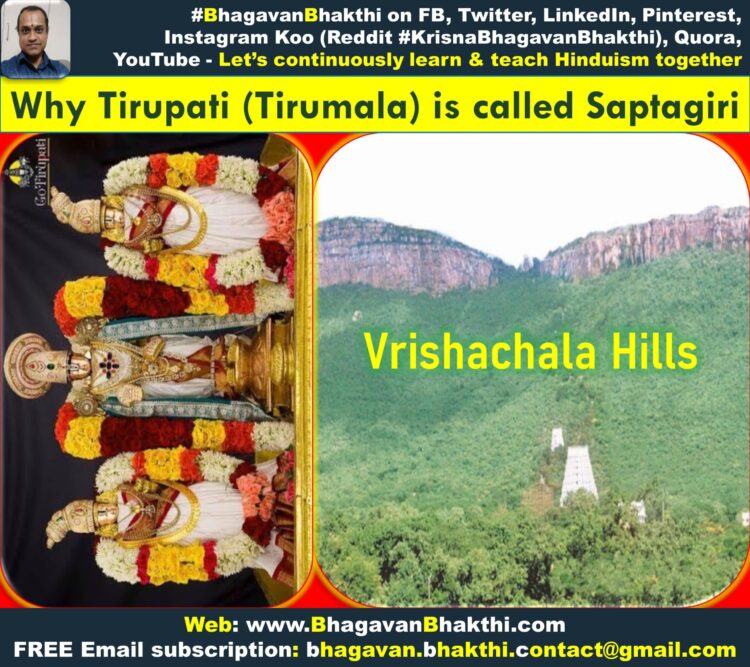 Tirumala or Tirumalai is the most recent name. In Tamil Tirumala = Tiru + Mala.

Here Tiru means addressing with respect, that is, this name is a sacred, divine, auspicious name and also Tiru means Sri Maha Lakshmi and Mala means a hill in Tamil.

Thus, the most divine name Tirumala or Tirumalai means a hill which is most sacred, divine, auspicious and this is the abode of Bhagavan Sri Lakshmipati (Another name of Bhagavan Sri Vishnu / Srinivasa).

To know more about Bhagavan Sri Srinivasa / Venkatesha / Balaji, click the below link: