No one knows about the existence of Hinduism (Sanatana) other than Lord Vishnu himself.

There are innumerable and believably unbelievable proofs in India about the existence of Mahabharata. 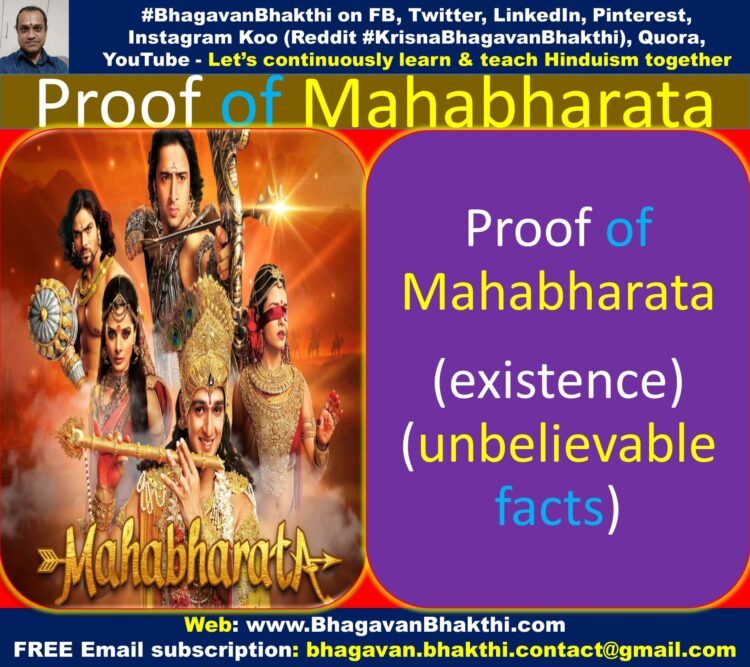 Today, let us know few of those real proofs about the existence of the Mahabharata.

First let us know the names of the list of the proof of Mahabharata, later below we will learn more information about the same with images.

List of proof of Mahabharata are as given below:

Pandavas in Makali (Outskirts of Bengaluru)

Pandavas in Aigandapura (Near Bengaluru)

The priests here say the place named as Sri Bhimeshwara temple. This temple is located on banks of Arkavati river.

There is a giant footprint of the great Bhima in this place and locally this footprint is called as Bhimana Hejje (Bhima’s footprint). 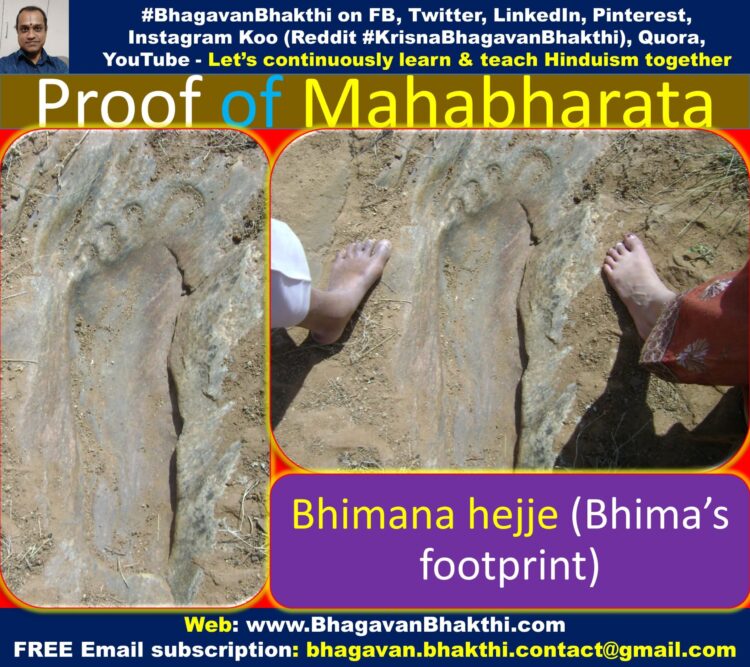 The Bhimeshwara temple is spread out across the road and is on slightly higher plane. Aigandapura is 30 Kms from Bangalore on Tumkur road. 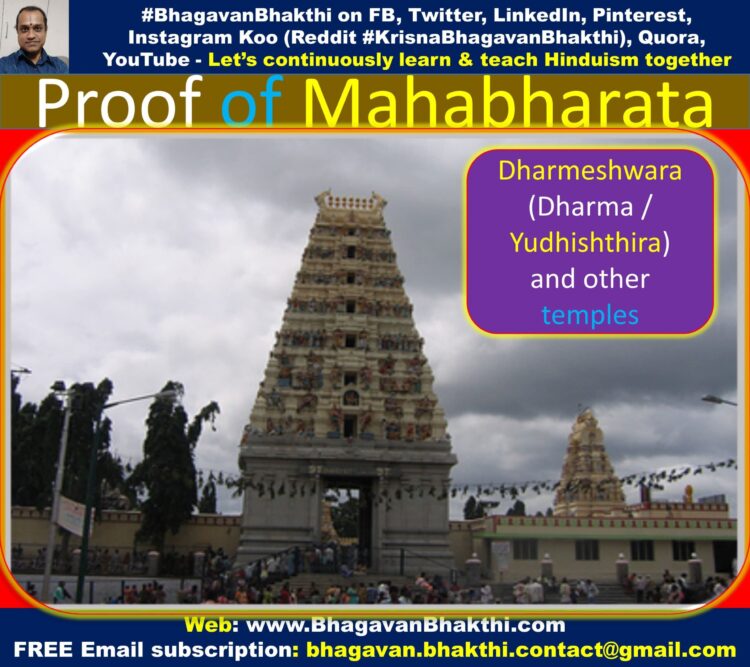 When the Pandavas were ascending to heaven, the Veerakumaras asked her to stay back.

She promised them that she will come back to earth once every year. The ten-day Karaga (A festival) marks the homecoming of Draupadi Devi.

This temple is in Bengaluru and it is called as Sri Dharmarayaswamy temple.

This temple is built in the Dravidian style, it is one of those rare temples dedicated to the Pandavas and Draupadi Devi.

While it is named after Dharmaraya (Yudhishthira), but it is Draupadi Devi who is mainly worshipped in this temple.

Next to them are idols of Bhima, Arjuna, Nakula and Sahadeva, apart from Lord Krishna and Adi Shakti. 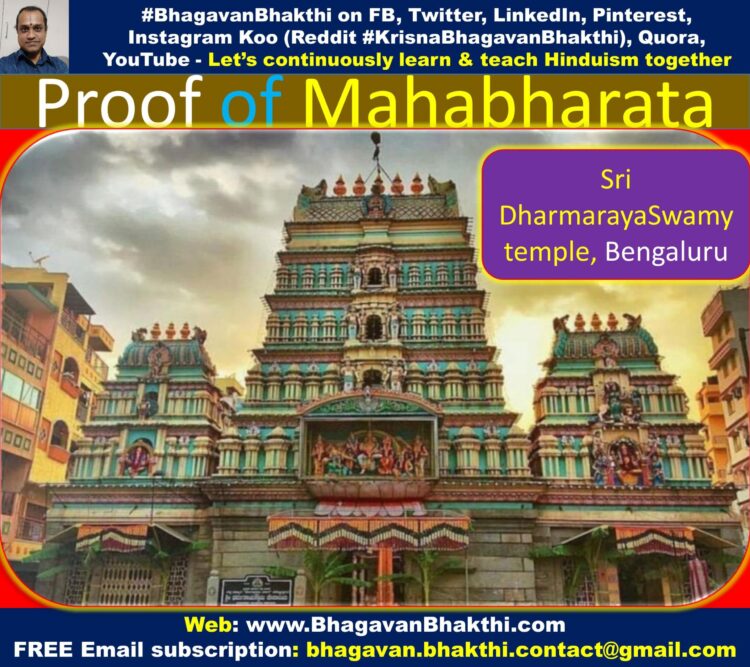 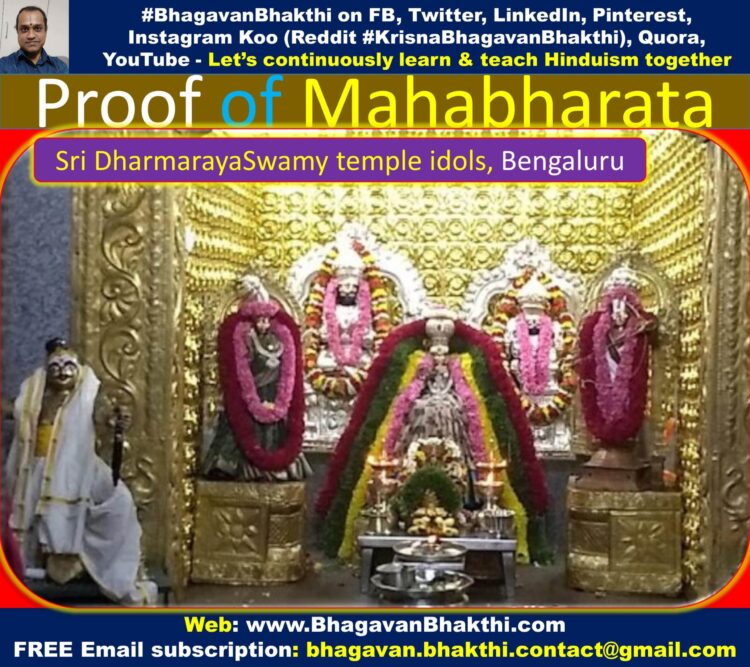 Pandavas in Delhi (Indraprastha) : A place called Kurukshetra, where the great Mahabharata war happened, archaeologists have uncovered few iron arrows, spearheads etc. with the use of thermoluminescence technology.

All these weapons dates back to 2,800 B.C.E., which is almost the approximate time frame of the Mahabharata war.

The Mahabharata epic clearly talks about the cities that were given to Pandavas like Indraprastha, Paniprastha and Vanaprastha.

These cities now are in today’s Delhi’s Puranaqila, and archaeologists have found pottery and antiquities that corresponding to cultural and dating consistency with the Mahabharata period. 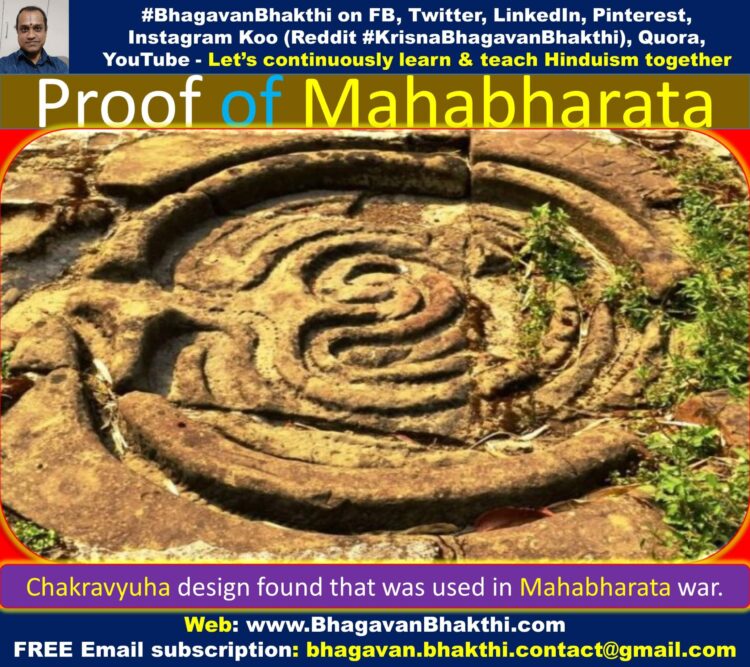 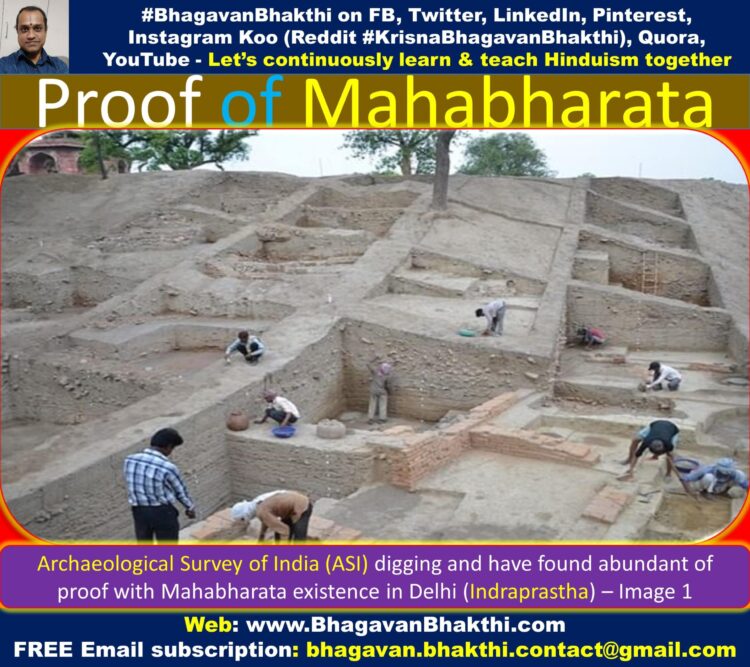 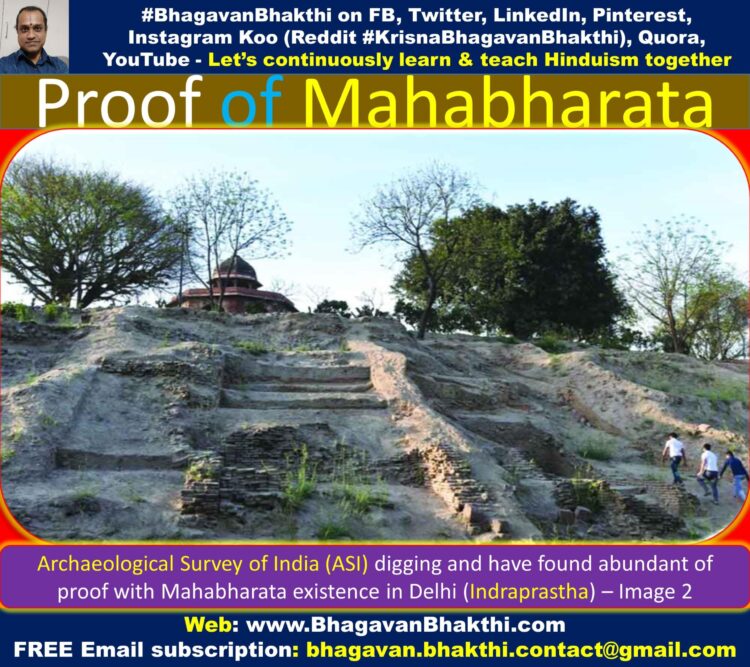 All these evidence are in alliance with the descriptions in the Mahabharata scripture which talk about existence of Mahabharata.

Marine archaeologists have also found the entire city of Dwaraka submerged in the ocean, which is said to be the ancient port city of Lord Krishna. 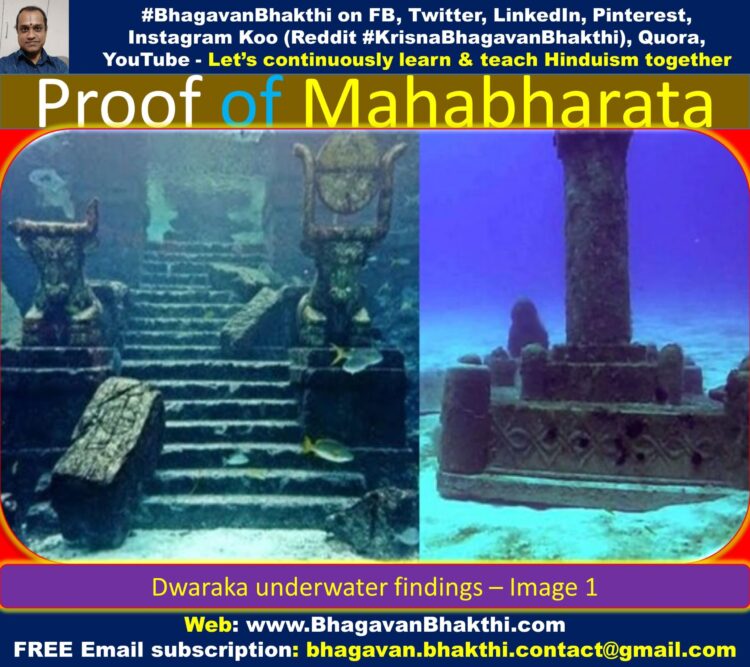 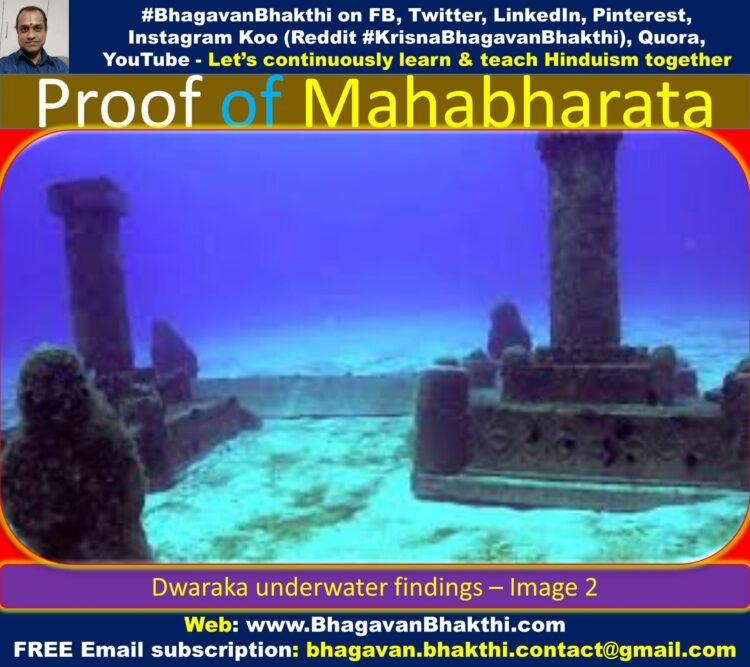 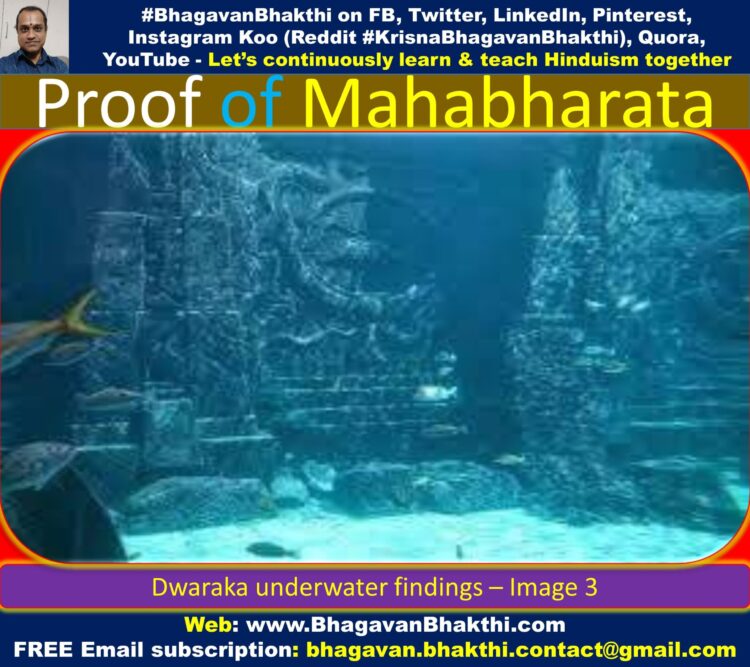 The Telangana Region is believed to have been mentioned in the Mahabharata as the Telinga Kingdom, which is said to have been inhabited by the tribe known as Telavana, who fought on the Pandavas side in the great war of Kurukshetra.

This is the place where the mighty Pandavas spent their life in exile for some time (Lakka Guham). 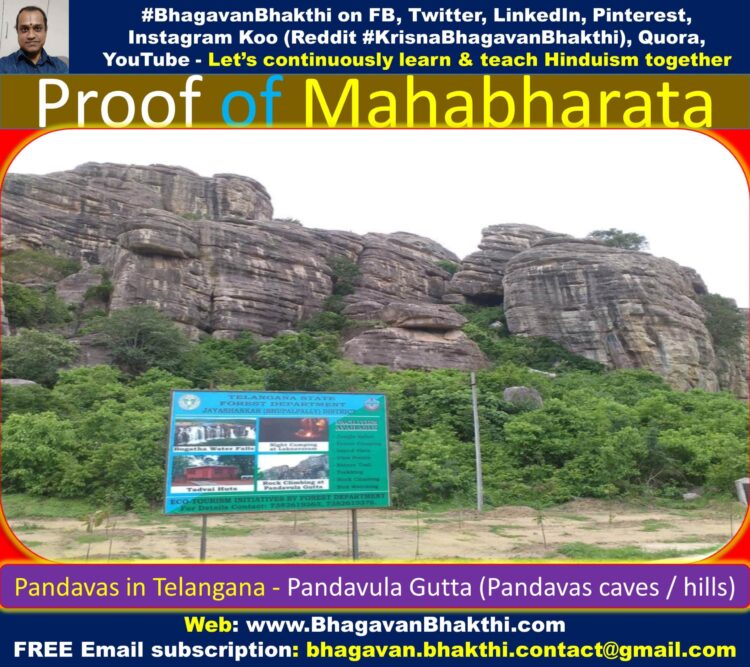 More information will be added to this on regular basis. Please visit after some time to get more updates.

To know about Mahabharata unknown facts, please click the below link:

To know about “Hinduism unknown facts“, please visit the below link: