Who are the immortals (Chiranjivi) of Hinduism

Today let us know about the “Who are the immortals (Chiranjivi) of Hinduism” as given below. 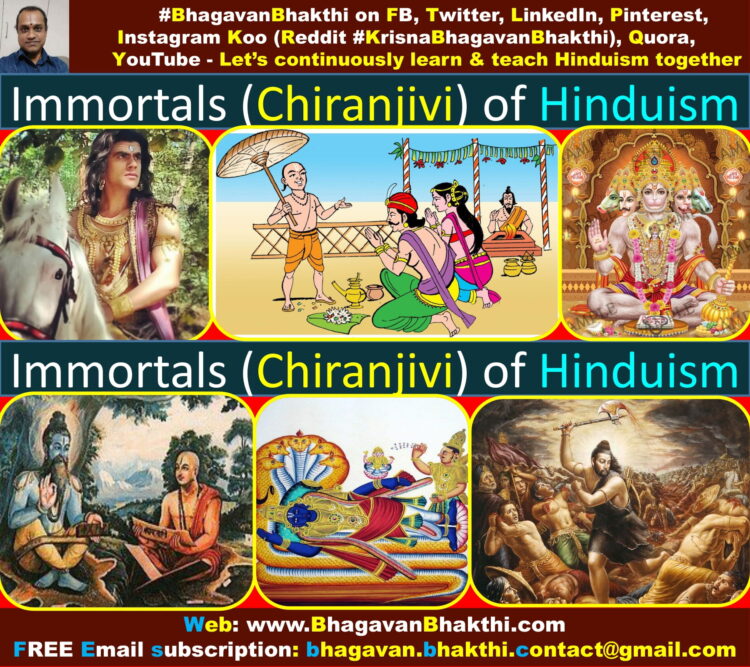 Hinduism (Sanatana Dharma) is existing since the ‘aadi kalam’ (Unknown time frame) and will last long until the ‘ananta kalam’ (Infinite time frame).

No one is aware about, when Hinduism (Sanatana Dharma) started, except Lord Vishnu.

There is a tradition saying about sapta chiranjivi (7 immortals) in Hinduism with a shloka as given below:

7 Chiranjivi shloka is as given below:

These are the seven eternal, ageless, immortal souls according to our Hindu (Sanatana Dharma) tradition. 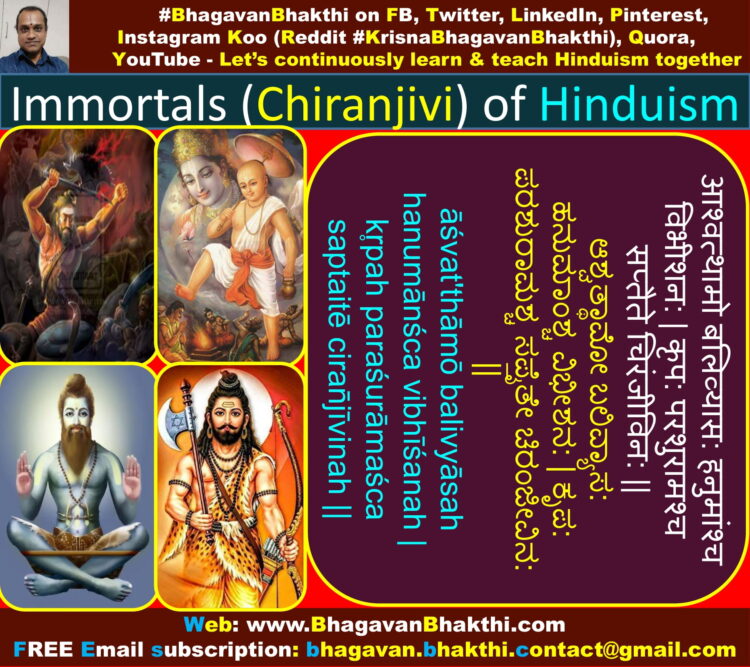 Someone who remembers and chants this shloka of seven chiranjivis (immortals) everyday, will be blessed with a long and healthy life.

Apart from the above seven, even Rishi Markandeya is considered as immortal (chiranjivi).

Now let us take one by one of the above immortals (chiranjivi) and let us have a brief information about all of them.

List of the immortals (chiranjivi) of Hinduism (Sanatana Dharma) is as given below:

Ashwatthama – He is an avatar of Lord Shiva

Bali Chakravarti (Mahabali) – He is the grand son of Prahlada

Veda Vyasa – He is an avatar of Lord Vishnu

Hanuman – He is an avatar of Lord Vayu Deva

Vibhishana – He is the brother of Ravana and Kumbhakarna

Parashurama – He is an avatar of Lord Vishnu

Markandeya – Apart from the above, even Markandeya is considered as an immortal (chiranjivi).

Brief explanation of the immortals (chiranjivi) of Hinduism (Sanatana Dharma) is as given below: 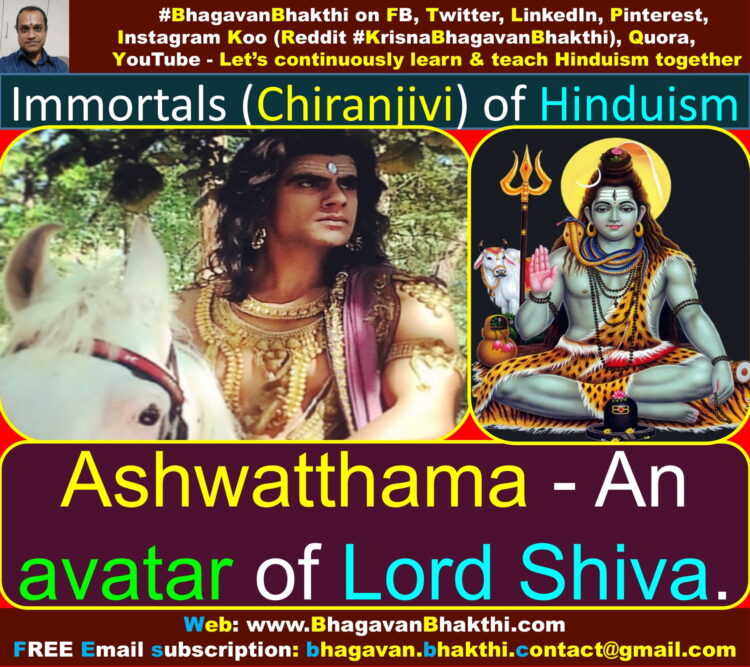 In Mahabharata, Ashwatthama was born as the son of Dronacharya and Kripi. (Kripi is the sister of Kripacharya).

Ashwatthama takes birth in cave in a forest.

(In today’s time this place is called as Tapkeshwar Mahadev temple at Dehradun in Uttarakhand state).

Dronacharya does many years of tapas (penance) to please Lord Shiva in order to obtain a son who possesses the same valiance as Lord Shiva.

As said above, Ashwatthama is an immortal (Chiranjivi).

Ashwatthama was born with a gemstone (mani) on his forehead.

This highly potent jewel, had the power to a ward off death, disease, old-age, hunger, thirst, darkness, ignorance etc.

Gemstone (mani) was one of the main sources of Ashwatthama’s strength. 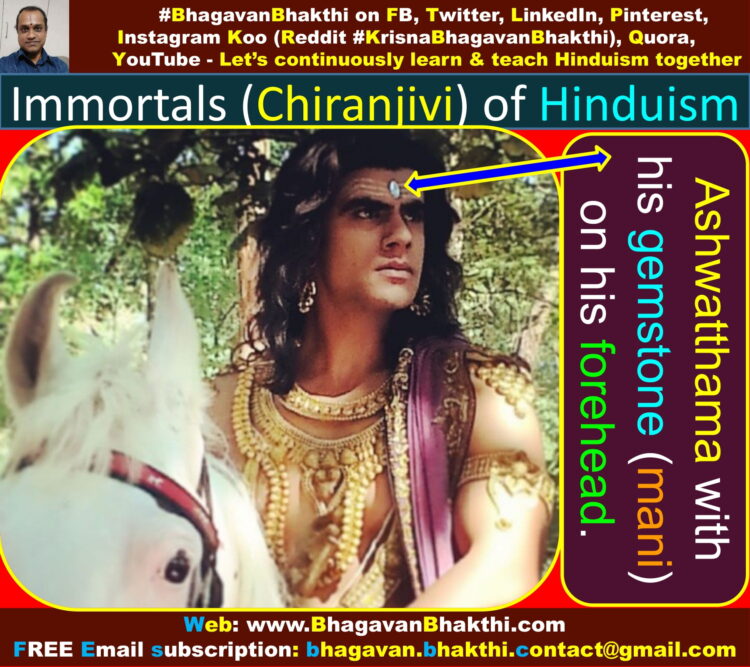 Lord Veda Vyasa at the end of the war of Mahabharata asks Ashwatthama to give his gemstone (mani) to Bhima as atonement for firing ‘Brahmastra‘ at him and for his inability to withdraw it. 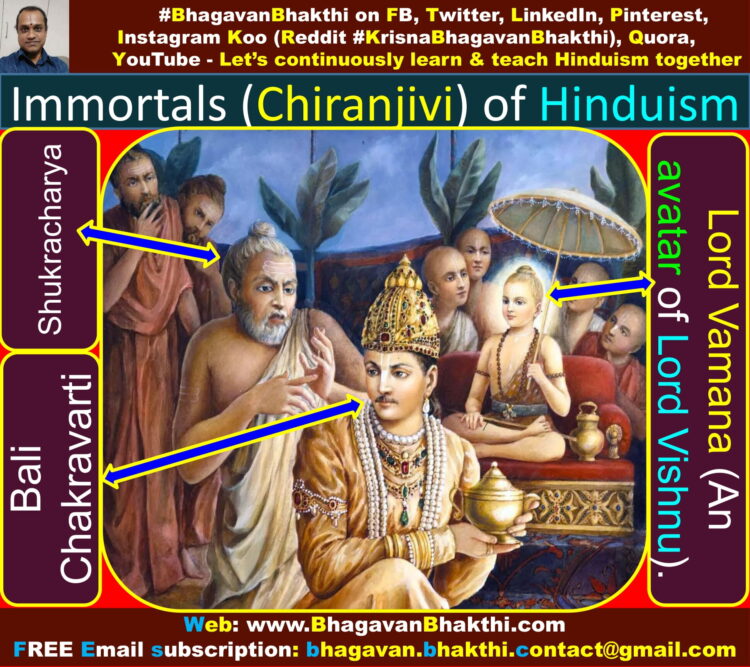 He was born in the daitya (demon) family of Hiranyakashipu and he was the king of all the daityas (demons).

But, even though Bali Chakravarti (Mahabali) was a daitya (demon), he ruled with proper dharmanista (As per Sanatana Dharma).

During Deepawali, all the Indian Hindus celebrate a festival (Part of Deepawali) called as ‘Bali Padyami‘. 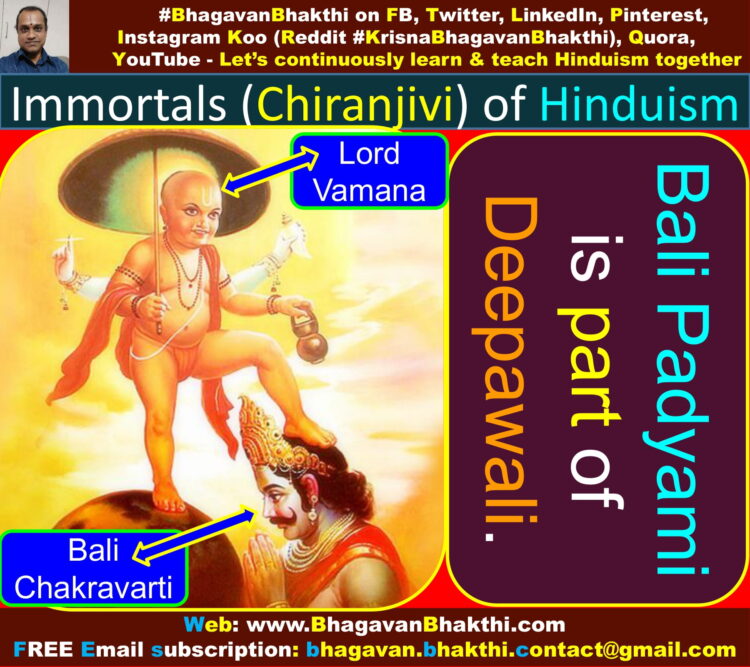 This day is reserved for Bali Chakravarti (Mahabali).

It is the day on which Bali Chakravarti will be the Chakravarti (divine emperor) for the entire world.

It is the day on which Lord Vamana (Lord Vishnu avatar) pushed Bali Chakravarti (Mahabali) to Sutala Loka (One of the Patala Loka / Underworld).

Lord Vamana gave the boon that ‘Kartika Shukla Paksha’ on Padya day, it will be reserved for Bali Chakravarti (Mahabali). 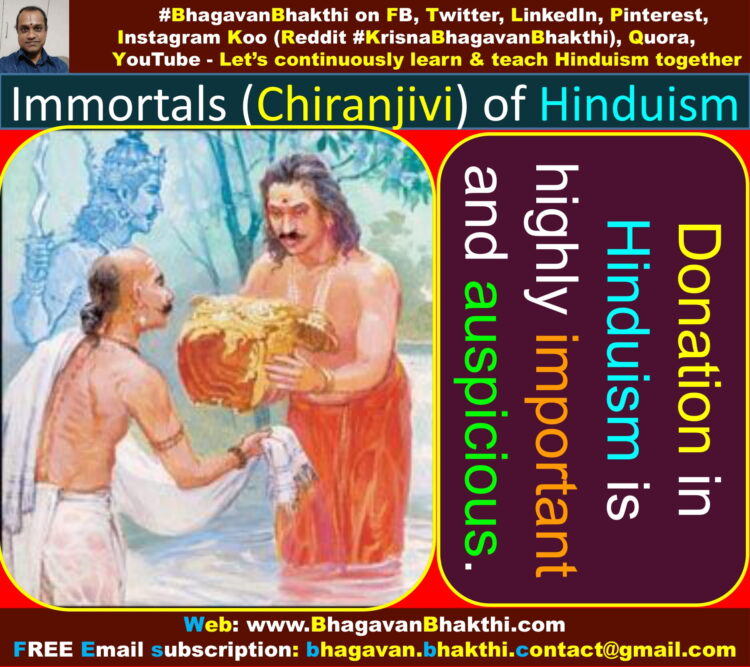 It is called as ‘Veda Vyasa Jayanti‘. 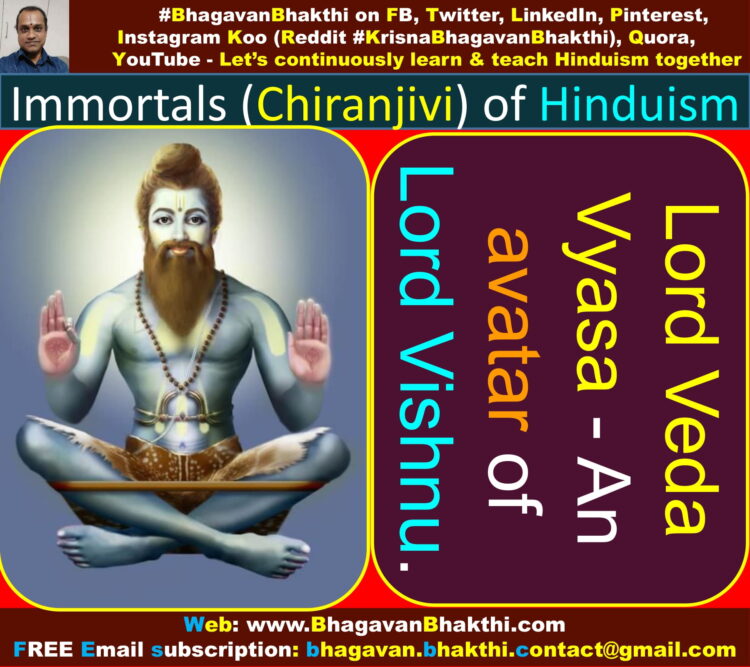 Lord Sri Veda Vyasa has born on five occasions as given below:

Lord Sri Veda Vyasa was born on five occasions in different periods as given below:

Different names of Lord Sri Veda Vyasa are as given below:

Why Lord Sri Veda Vyasa has the above names:

Lord Sri Veda Vyasa was called as ‘Krishna Dwaipayana‘, when he was born, his complexion was dark and therefore he was referred as Krishna. 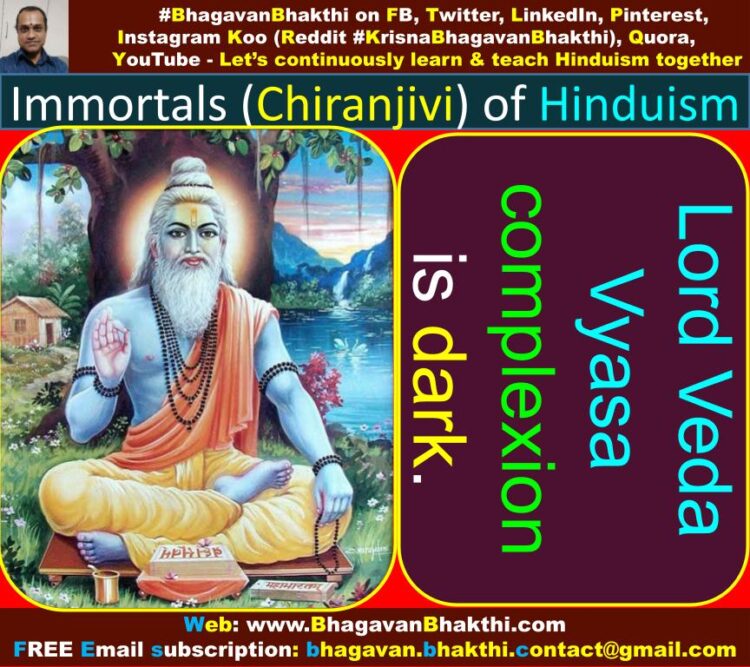 His mother gave birth to his child on one of an island (dweepa) of Yamuna River.

That’s why he got the name ‘Krishna Dwaipayana‘. 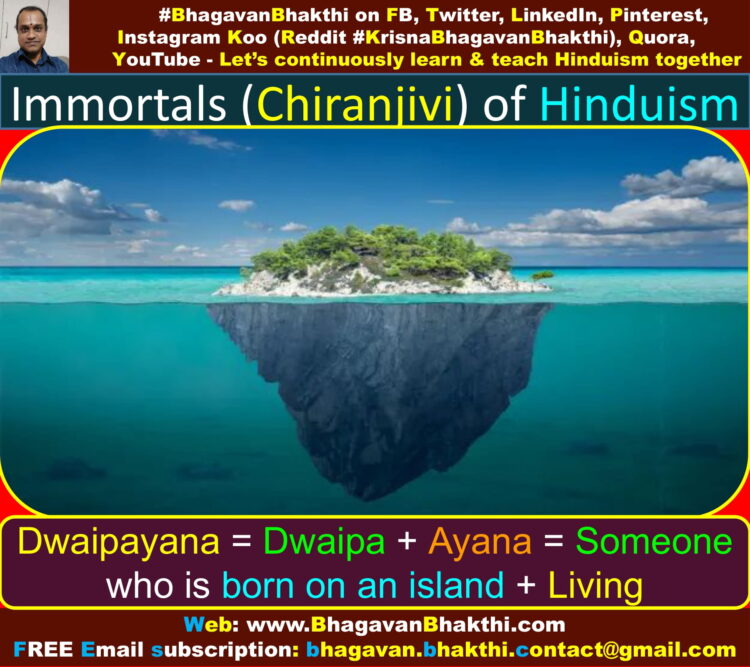 The island was covered by Badara (Indian jujube) trees, so he was also known as Badarayana. 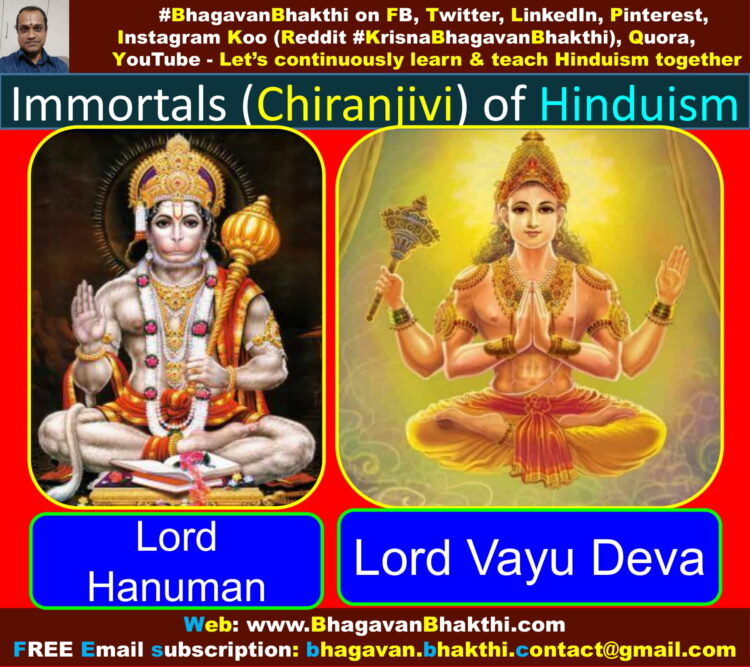 He was born in Meru Parvata as per Moola Ramayana and Valmiki Ramayana.

But we people have given commentary that, Hanuman was born in Kishkinda.

Kishkinda today is known as Hampi (in Karnataka). Earlier, Hampi was known as Pampa.

Different names of Lord Hanuman is as given below:

Mukhya Prana Deva : Lord Hanuman is the main Prana, that is, he is the main life giver (After Lord Vishnu and Goddess Sri Maha Lakshmi Devi).

Kesari Nandana (Kesari Suta) : Lord Hanuman is the son of the King Kesari.

Maruti : Lord Hanuman is the son of Maruta (Another name of Vayu deva).

Kapeeshwara : Lord Hanuman is the Lord of all the Monkeys.

Vajranga Bali (Bajranga Bali) : Lord Hanuman body is highly strong and can be compared to vajra (diamond). Bajranga is a mispronounced word of Vajranga. 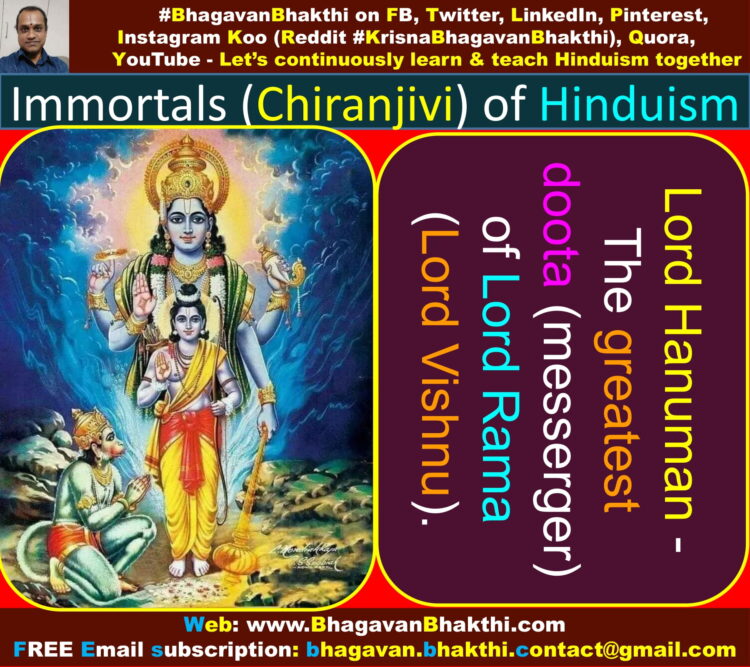 Sankata Mochana : Lord Hanuman is the remover of problems, hardships, hurdles, etc. of his devotees.

Lord Vayu Deva (Hanuman) different avatars are as given below:

Sri Madhwacharya Ji : Took avatar in Kali Yuga and even today he is serving Lord Veda Vyasa in ‘Maha Badrinath’. 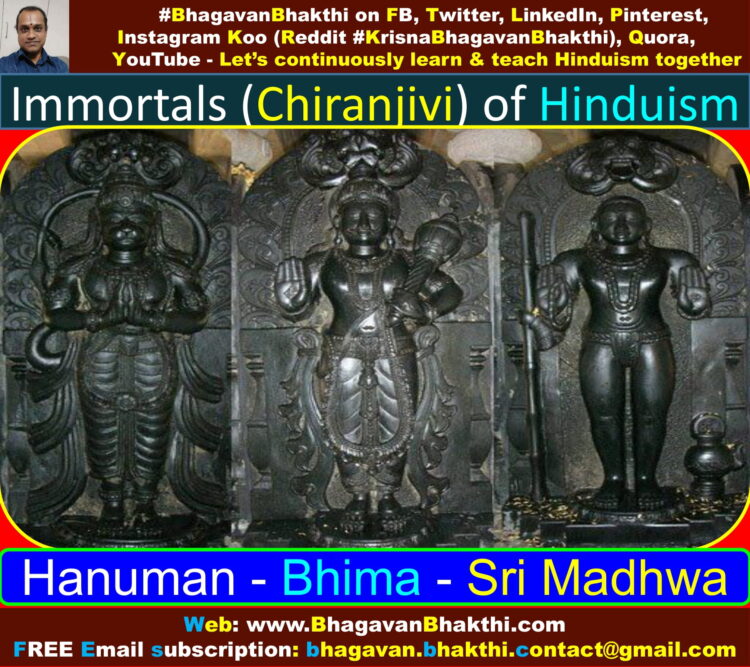 Vibhishana : Vibhishana was the youngest brother of Ravana, the second brother name is Kumbhakarna. 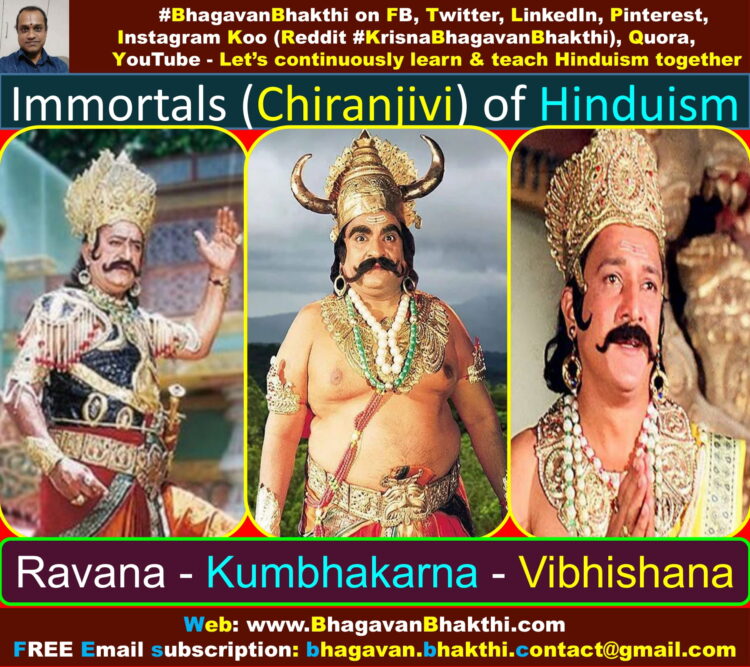 Vibhishana wife name is Sarama and daughter name is Trijata.

(Trijata is again born as Subhadra as the sister of Lord Krishna during Dwapara Yuga period). 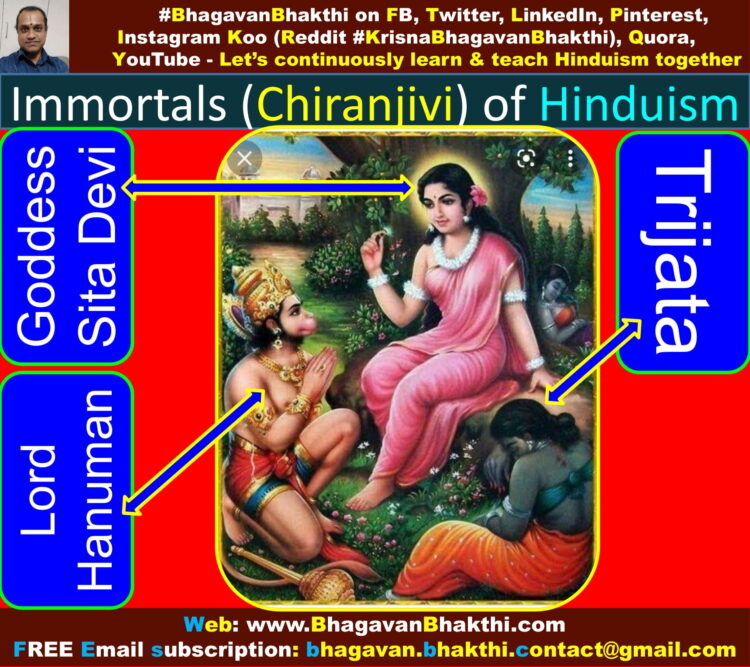 Even though Vibhishana was born in the daityas (demons) family, he was a great Vaishnava.

Vibhishana was an ardent devotee of Lord Vishnu (Lord Rama).

At this time, Lord Rama instructed Vibhishana to stay on earth and serve the people and guide them to the path of truth and dharma.

Hence, Vibhishana is considered one of the sapta chiranjivi (seven immortals). 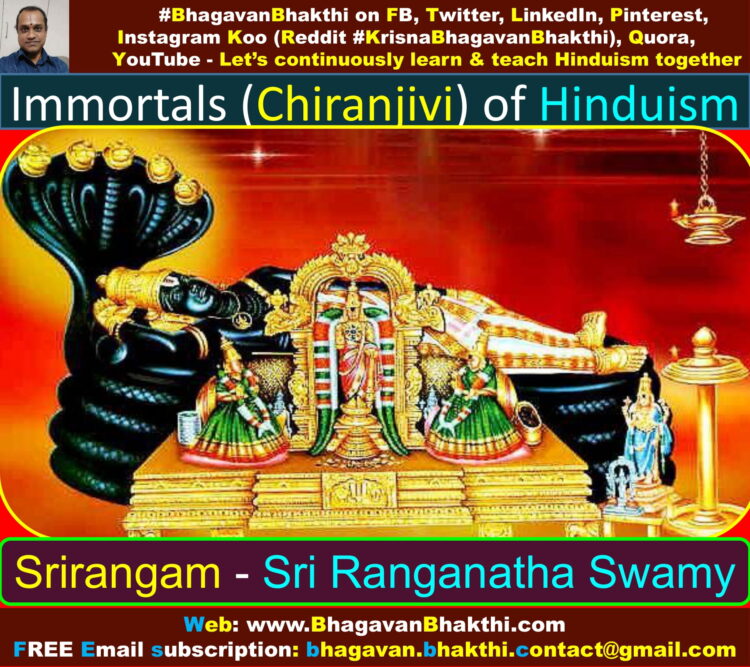 We can see Vibhishana’s deity doing pooja of Lord Sri Ranganatha Swamy in Srirangam temple in Tamil Nadu even today.

Vibhishana in his earlier was born as Kanva Rishi.

It is said that, Vibhishana is staying in Srirangam in disguised (invisible) form and serving Lord Sri Ranganatha Swamy even today in Srirangam.

Kripacharya is also called as Kripa (Krupa) in simple way. 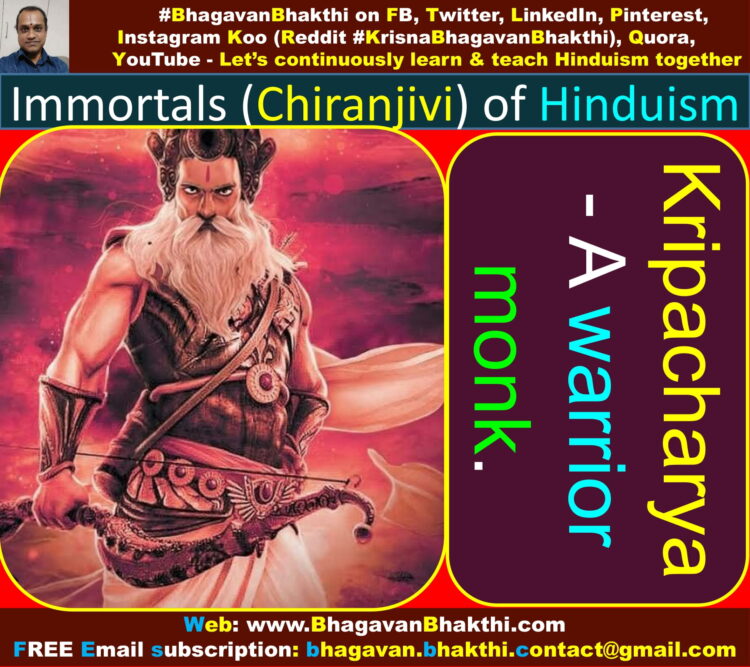 Kripacharya father name is Sharadvana, Kripi is his sister, Dronacharya was his brother-in-law and Ashwatthama was his nephew.

In Mahabharata, Kripacharya was known by few other names as given below:

Gautama : Kripacharya was a descendant of Gautama.

Bharatacharya : Kripacharya was a teacher of the descendants of King Bharat (Bharata). 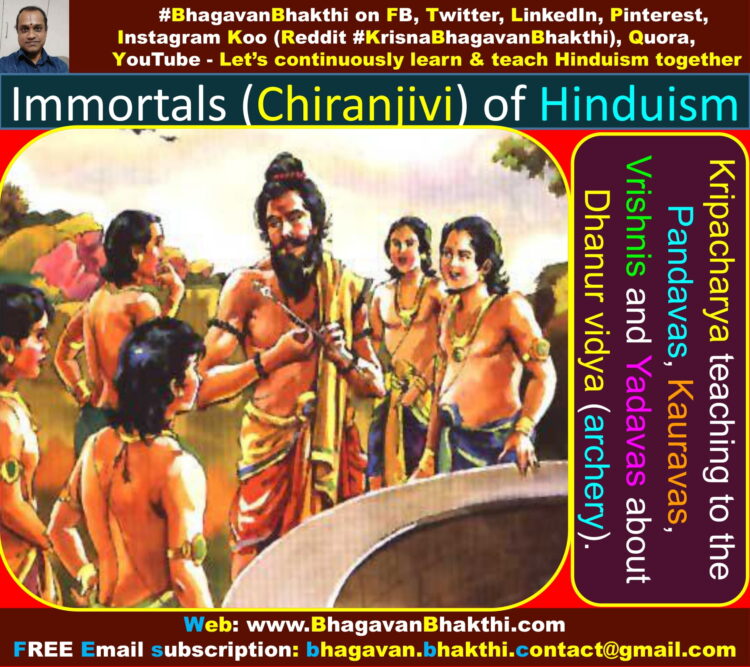 (Later all the Pandavas, Kauravas, etc. went to Dronacharya to get higher knowledge).

The Mahabharata’s Sabha Parva explains that, Kripacharya participated in the Rajasuya ritual of Yudhishthira.

During this time, Kripacharya distributed dakshina to all the Brahamanas.

In the Mahabharata’s Virata Parva, Kripacharya helped Duryodhana, by sending spies to find the Pandavas during their incognito period of exile.

According to the Srimad Bhagavatam (Vishnu Purana), Kripacharya will become one of the Saptarishi, that is –

One among the seven most revered sages in the next Manvantara. 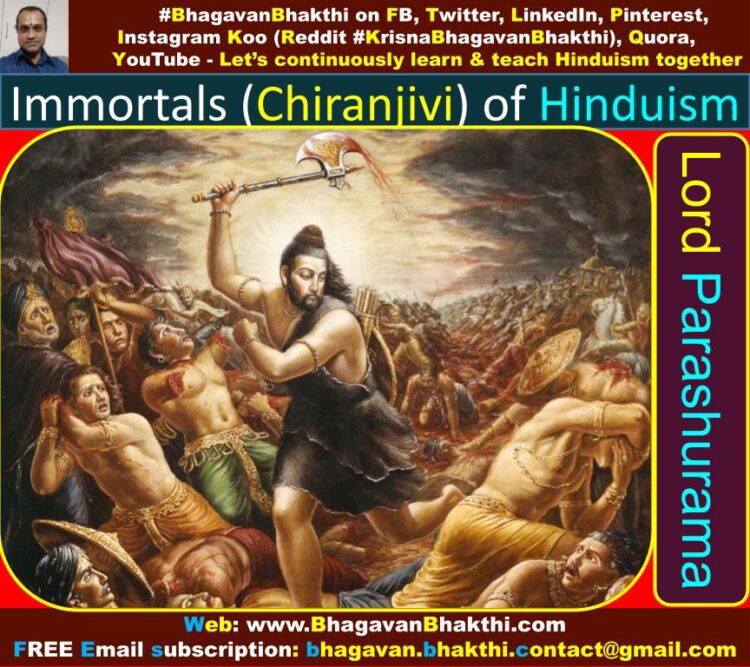 Since Lord Parashurama childhood, he used to move around with his formidable weapon called ‘Parashu‘ (axe) and thus he was called Parashurama..

Where Maharishi Jamadagni is the son of Satyavati Devi (mother) and Rishi Rucheeka (father).

Lord Parashurama disciples names are as given below: 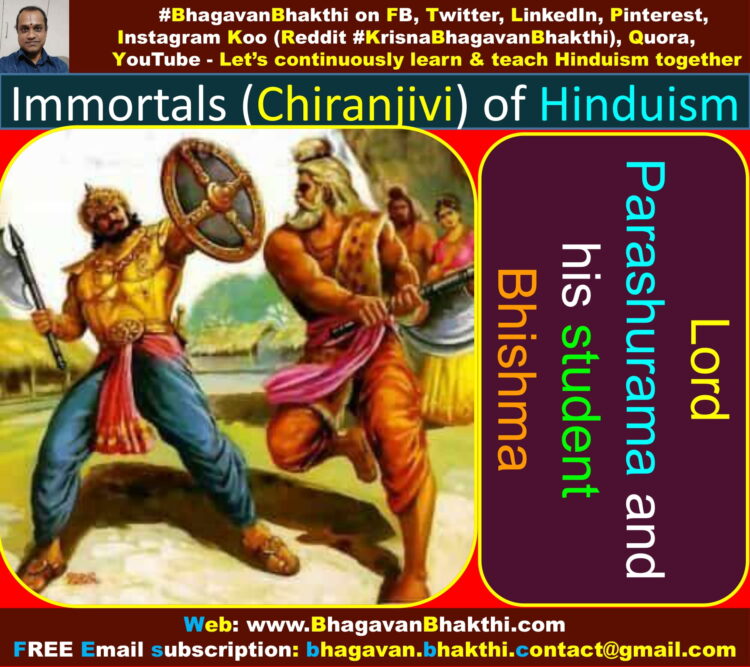 Dronacharya : He was also a student of Lord Parashurama. Later Dronacharya became Guru of Pandavas and Kauravas.

Karna : Karna had earlier not informed about his varna (As he himself was not aware of his varna). 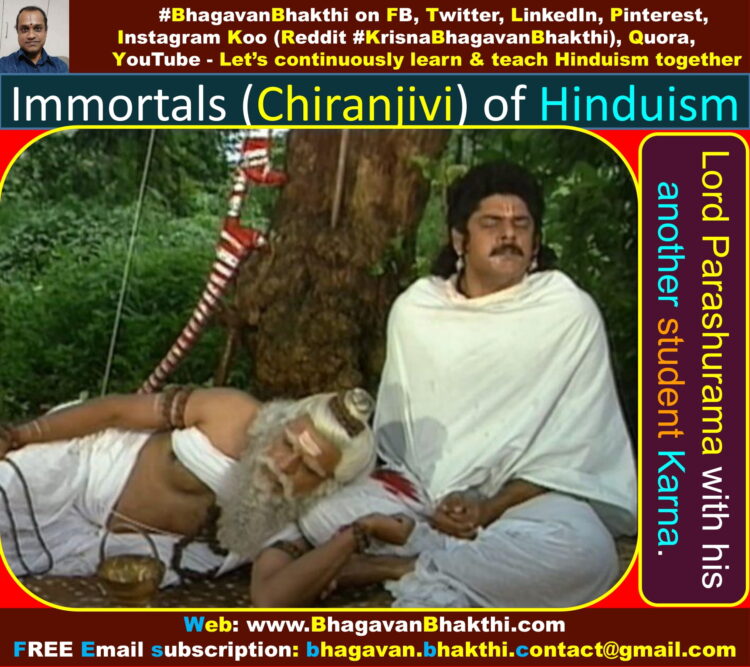 Lord Parashurama had taught Karna all the lessons.

Subsequently Lord Parashurama came to know that Karna is a Kshatriya by birth.

And Lord Parashurama cursed Karna that, he will not remember the ‘Vital Mantras‘ in the war field.

Thus, when Karna and Arjuna were in the battle field in Kurukshetra, Karna was not able to remember the ‘Vital Mantras’ to invoke Brahmastra.

After touring 21 times to kill the vile Kshatriya, Lord Parashurama made the daana (donated) his entire possession to brahmanas.

Thus Lord Parashurama was not left with any place to stay on earth.

For this reason, at the time of making any daana (donation) one should say ‘Parashuramaaya namaha‘.

Then Lord Parashurama threw his axe on the western ocean and moved the sea for some distance, and converted the sea-land into land (bhoomi). 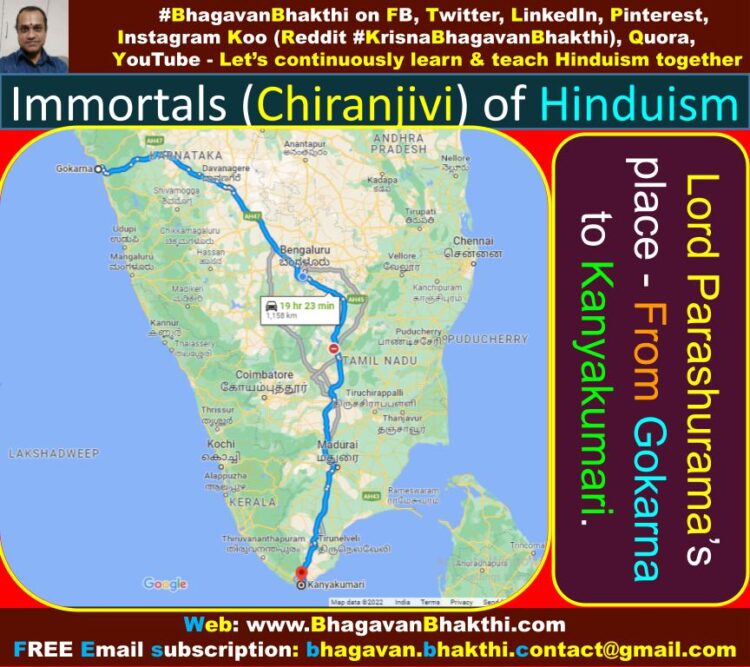 Even today, Lord Parashurama is physically present in a place called ‘Mahendra Parvata‘.

It is said in our Puranas that, Lord Parashurama is still doing tapas (penance) at Mahendra parvata, for the peace and happiness of the whole world.

Markandeya : He was born to Rishi Mrikanda (father) and Marudmati (mother).

Even today, there is tirtha (pilgrimage site) called as ‘Markandeya Tirtha‘. 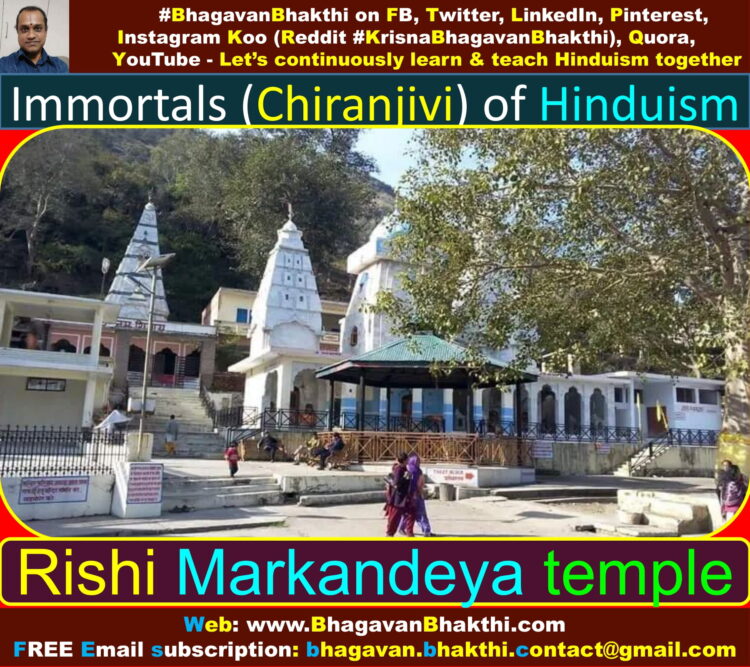 And this place is situated on a trekking route to the Yamunotri Shrine in today’s Uttarkashi district, Uttarakhand state and it is called as Tungnath. 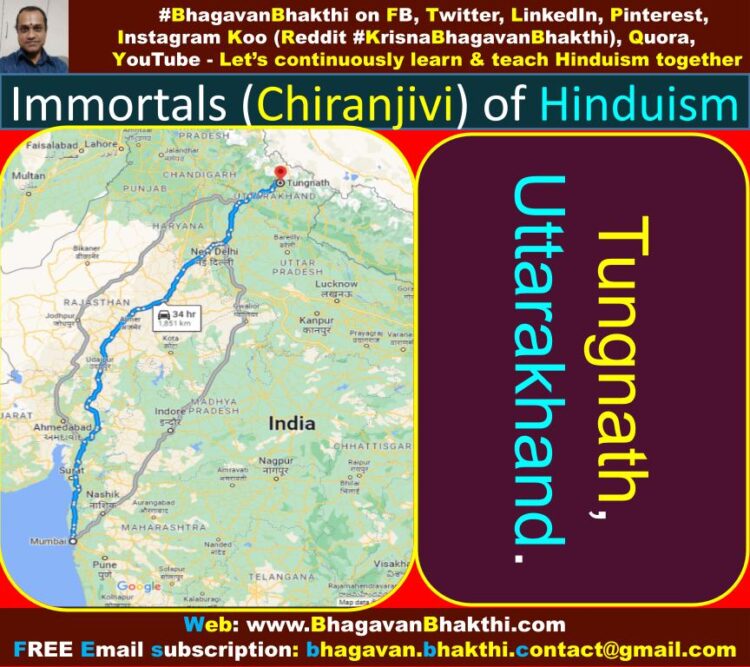 How Markandeya became chiranjivi (immortal) story is as given below:

Rishi Markandeya had a very short life of only 16 years.

Rishi Markandeya was known that, his life is very short and thus he started worshipping Lord Shiva with utmost devotion.

After the completion of 16th year, Lord Yama Deva came to take Rishi Markandeya by pulling him with arrows.

Lord Shiva came and rescued Rishi Markandeya and blessed him to be Chiranjivi (immortal). 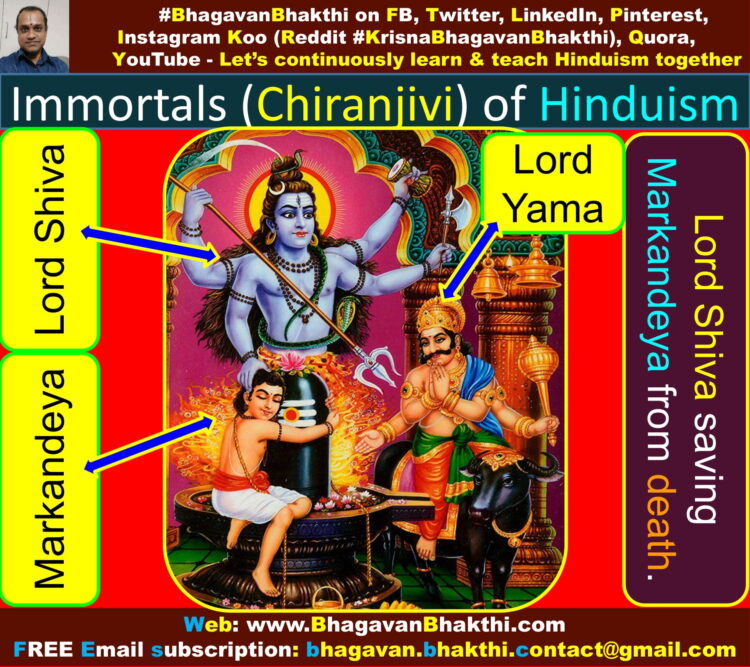 For this reason Rishi Markandeya is considered as one of the Chiranjivi (immortal).

Other chiranjivi (immortals) of Hinduism (Sanatana Dharma) are as given below:

To know more about Kashi (Varanasi / Banaras), please click the below link:

To watch the video about “Gyanvapi masjid (Kashi Vishwanath) facts with images“, kindly click the below YouTube video link: