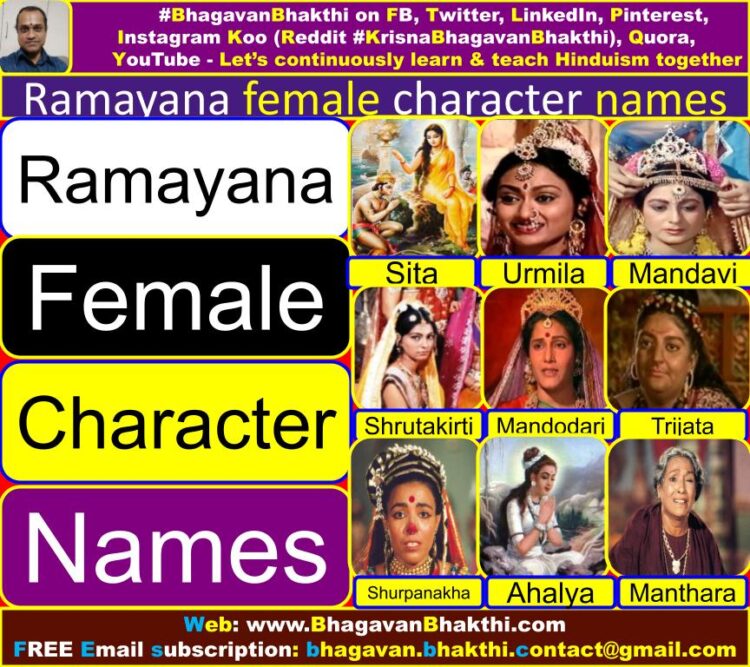 Ramayana happened in the Treya Yuga as per Hindu Puranas and epic Ramayana. 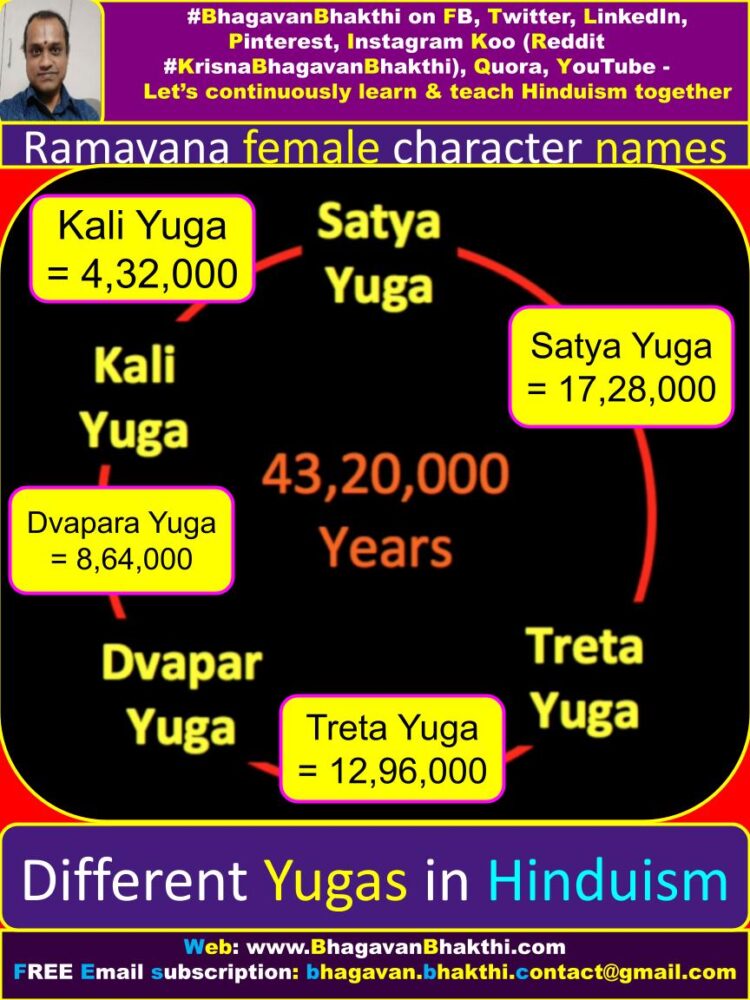 List of Epic Ramayana female character names are as given below:

Kausalya : She was the prime wife of King Dasharatha and mother of Lord Sri Rama. Her parents names are Sukaushala (father), Amritaprabha (mother). Her sister name is Vershini.

Sumitra : She was the second most important of King Dasharatha and mother of Lakshmana and Shatrughna. Her parents belonged to Kashi (Varanasi).

Kaikeyi : She was the third most important and most loving wife of King Dasharatha. She was the mother of Bharata (Bharat) (भरत). 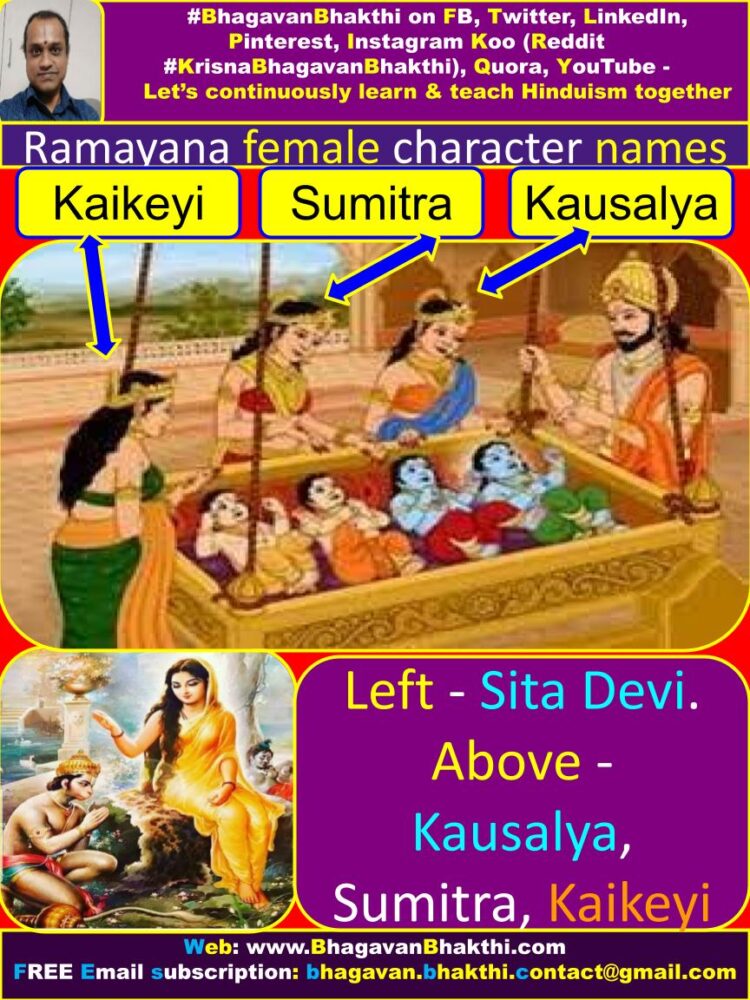 Kaikeyi father name is Ashvapati and she had a brother called Yudhajit. Kaikeyi was very listening to words of Manthara (She is the avatar of Alakshmi).

Urmila : She is the daughter of King Janaka (Seeradhvaja) (father) and Sunayana (mother). Her husband name is Lakshmana.

Urmila sons names are Angada and Chandraketu. Urmila belonged to a place called Mithila of Videha region in today’s Nepal.

Mandavi : She is the daughter of King Kushadhvaja (father) and Chandrabhaga (mother). Her husband name is Bharata (Bharat) (भरत).

Shrutakirti : She is the daughter of King Kushadhvaja (father) and Chandrabhaga (mother). Her husband name is Shatrughna. 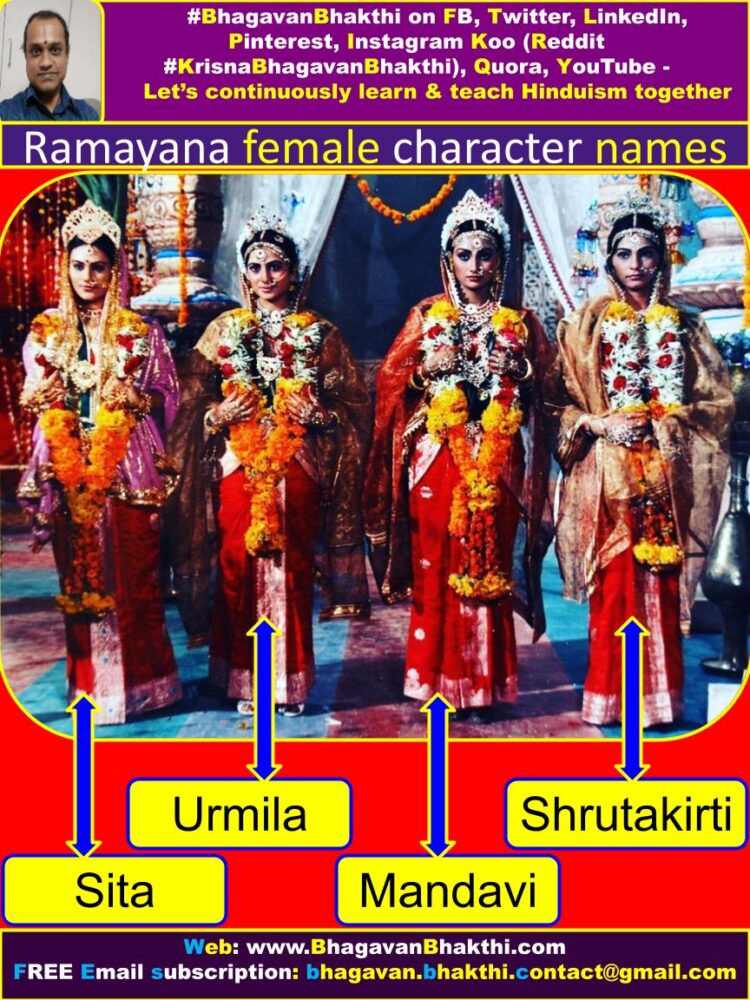 Shanta : She is the daughter of King Dasharatha and wife of Rishyashringi Rishi. King Romapada didn’t had any children and thus Dasharatha donates Shanta to him.

Manthara : Manthara was also called as Kubja, as she had hunch-backed, ugly and antagonistic appearance.

Manthara was an incarnation of Alakshmi. Alakshmi takes birth during the Samudra Manthan and is also called as Jeshta Lakshmi as she was born as the elder sister of Goddess Sri Maha Lakshmi Devi. 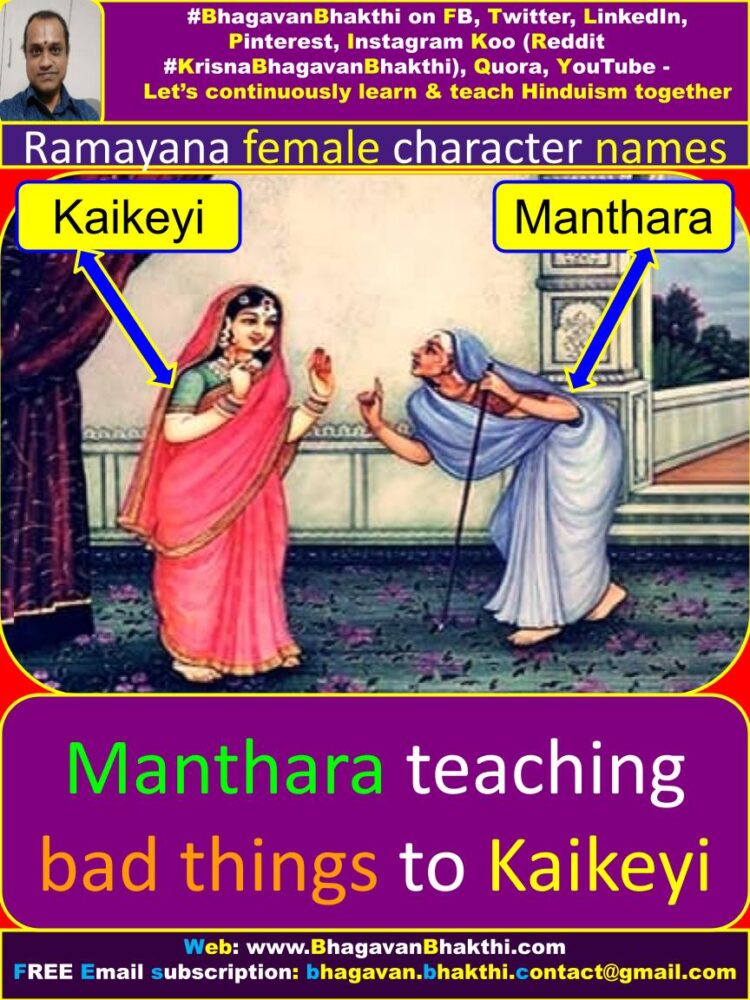 Nirvani : Nirvani was a Yakshini (Female Yaksha) and she was also a niece of Yaksha King Suketu.

Tataka : Tataka used to be a beautiful woman who was later transformed into a demoness (rakshasi), once she tried to seduce the Maharishi Agastya.

As a demoness, Tataka used to drink the blood of living creatures especially humans and used to kill anything she sees.

With the request of Vishwamitra Maharishi, Lord Sri Rama slayed her by cutting her body into several pieces. 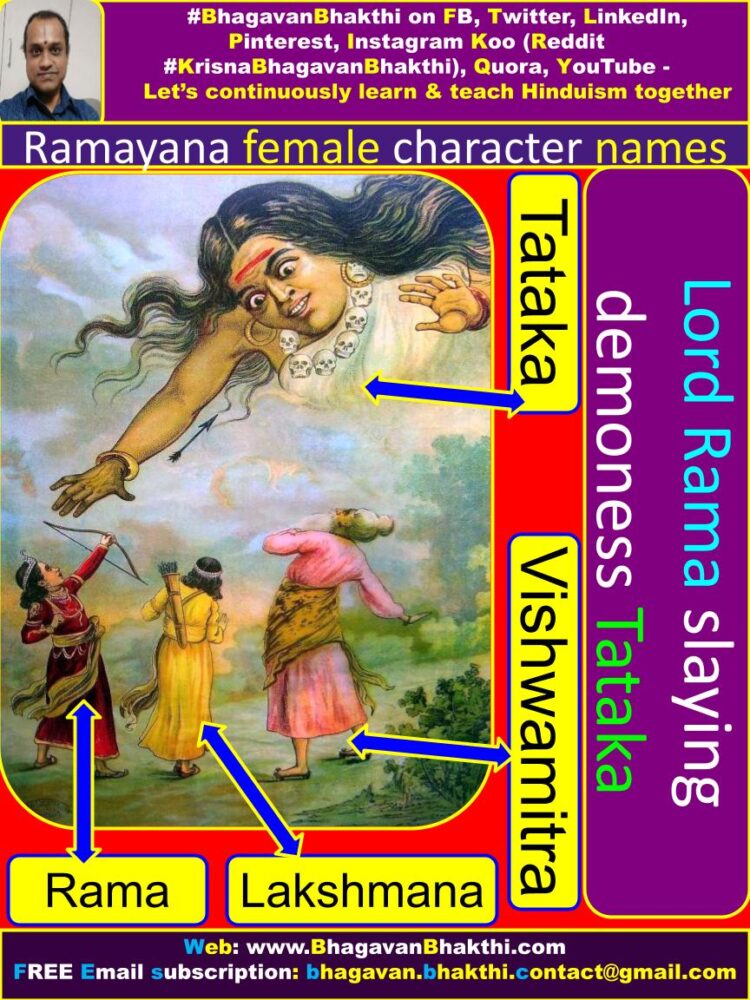 Ahalya Devi : She is the wife of Gautama Maharishi and also the mother of Shatananda Rishi.

Ahalya meaning : Ahalya = A + Halya = Never + pure, never make mistake, etc. Ahalya Devi is someone who is pure and never made any mistake.

Gautama Maharishi curses Ahalya Devi thinking she was in a relationship with Lord Sri Indra Deva.

In Treta Yuga, Lord Sri Rama clears the curse of Ahalya Devi given by Maharishi Gautama. 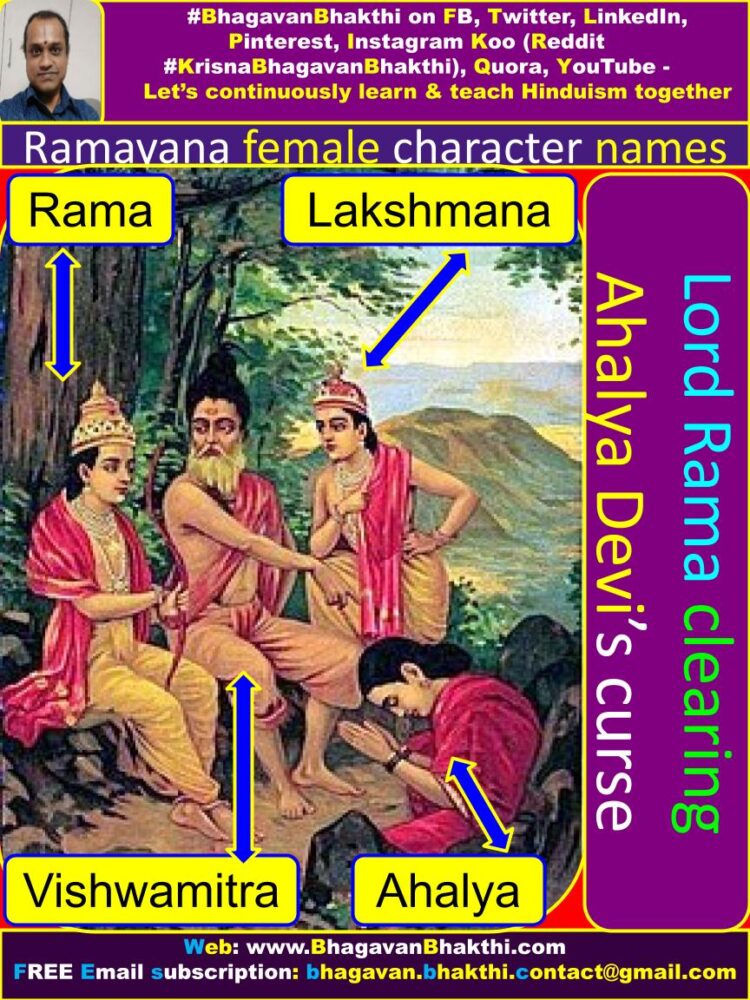 Shabari : Shabari is an elderly ascetic who was highly devoted to Lord Sri Rama. Her Guru was Matanga Rishi.

As Shabari’s Guru Matanga Rishi had instructed her to worship Lord Sri Rama, she waited for him for several years. 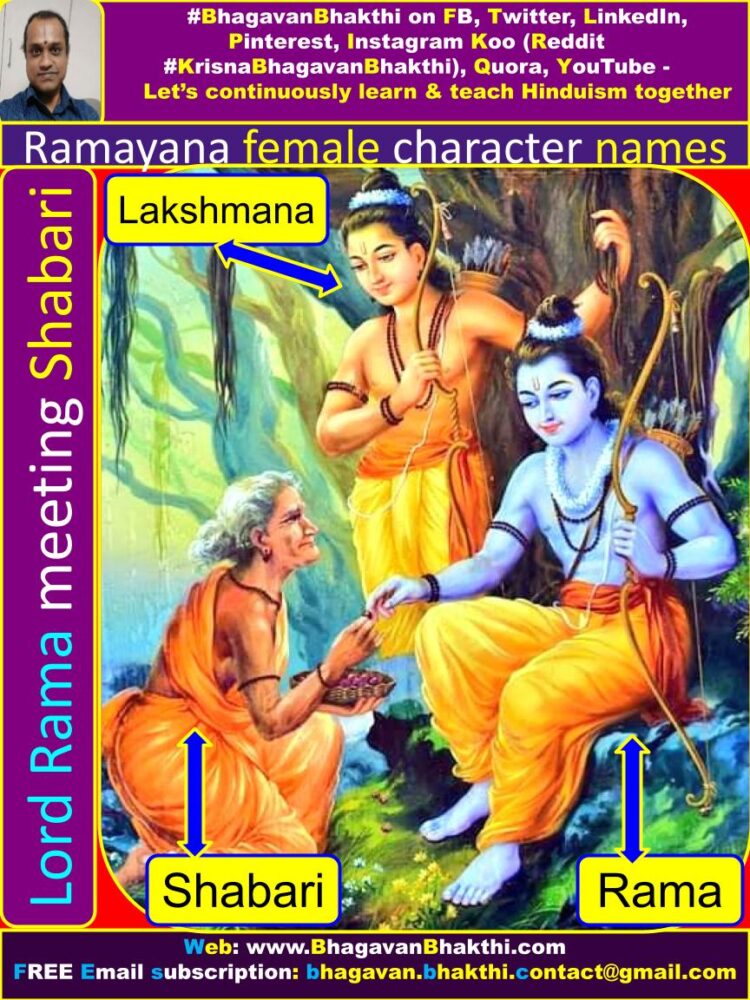 Tara : Tara was the daughter of physician Sushena (An avatar of Lord Sri Varuna Deva).

Tara was the wife of the King of Kishkindha Vali, and the mother of Angada. She is regarded as one of the pancha-kanyas.

Rumā : She is the wife of Sugriva, an avatar of Lord Sri Surya Deva.

Anjana : Anjana was an apsara named Punjikastala in her earlier life and was born on earth as a Vanara (Monkey) princess.

Anjana husband name is Kesari, a Vanara (Monkey) chief and he was the son of Brihaspati (Planet Jupiter). 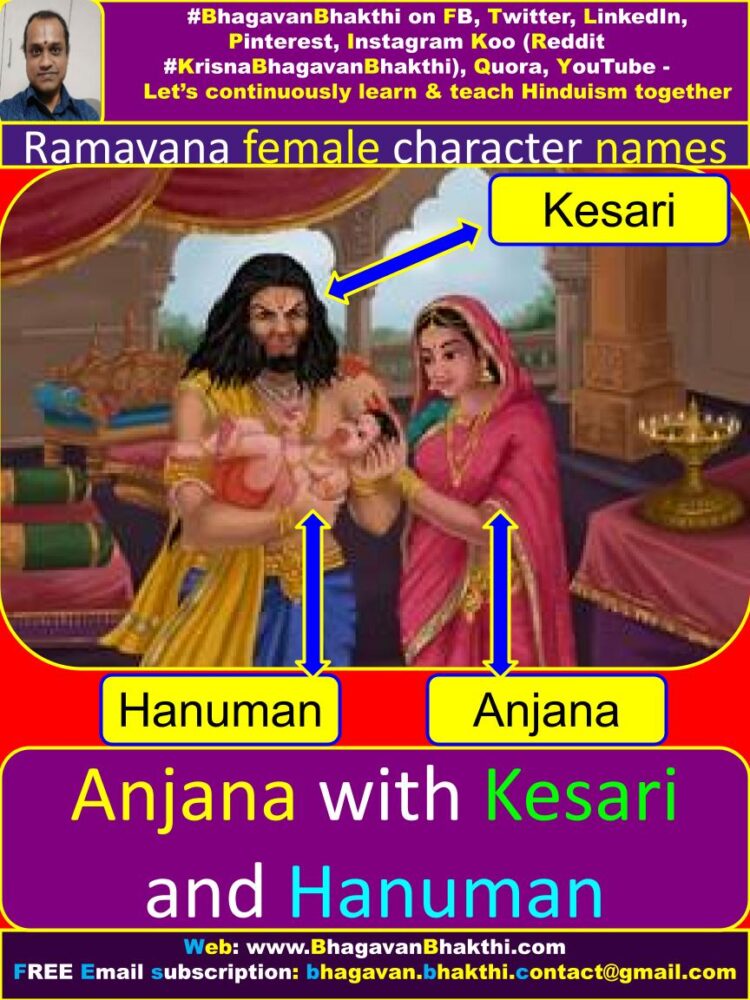 Kaikasi was a daughter of a Rakshasa (Demon) King Sumali (father) and Ketumati (mother). Kaikasi was a great devotee of Lord Shiva. 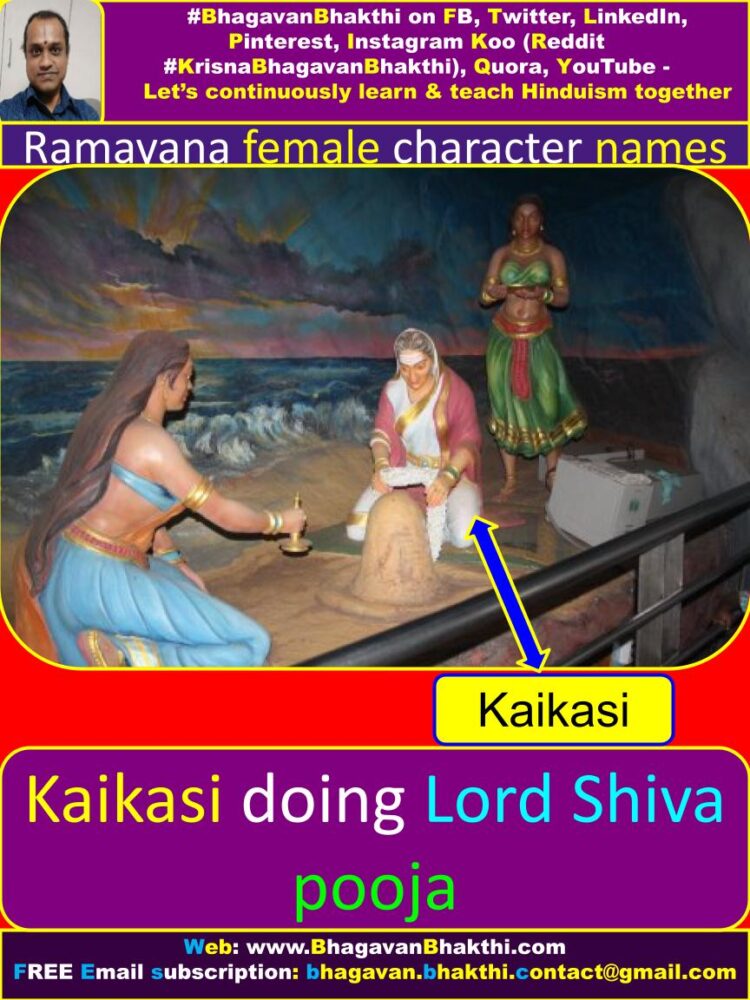 Mandodari : Mandodari was the chief consort of the demon King Ravana. The epic describes her as beautiful, pious, and Dharmic (righteous).

Mandodari was the daughter of Mayasura (father) and an apsara named Hema (mother). 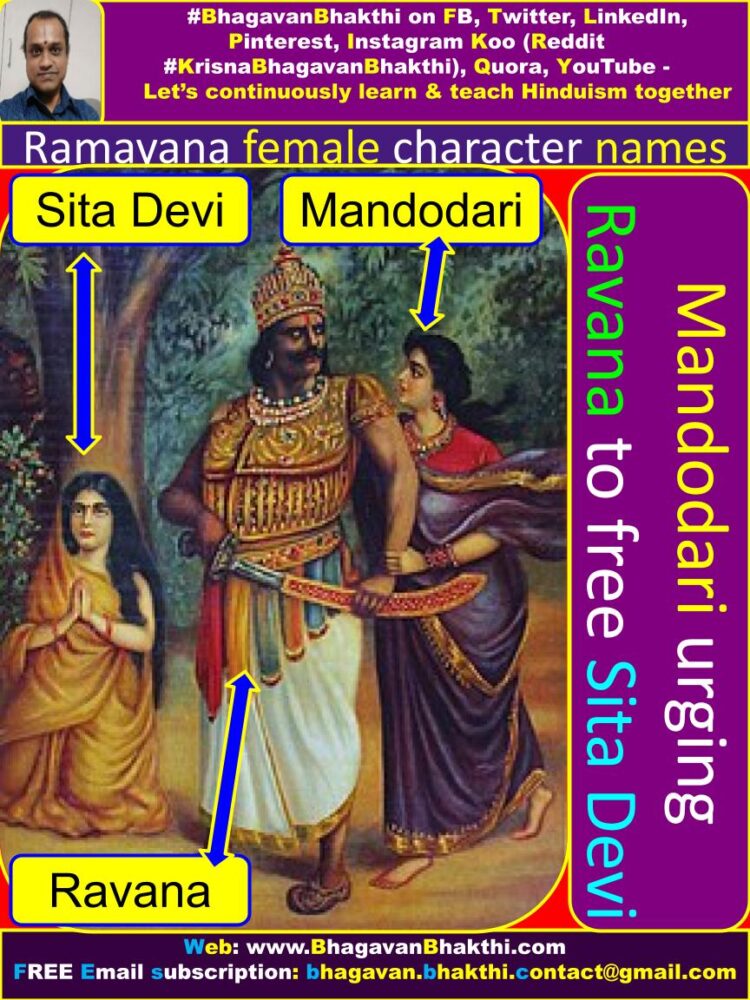 One of the information tells that she is the daughter of Mayasura (father) and and sister of Mandodari.

Sarama : Sarama was the wife of Vibhishana. She had three children namely Trijata (daughter), Taranisena (son) and Neela (son).

Sarama and Trijata both were friendly with Goddess Sri Sita Devi when she was abducted by the demon King Ravana.

Later Vibhishana became the King and Sarama became the Queen of Lanka after the death of the demon King Ravana. 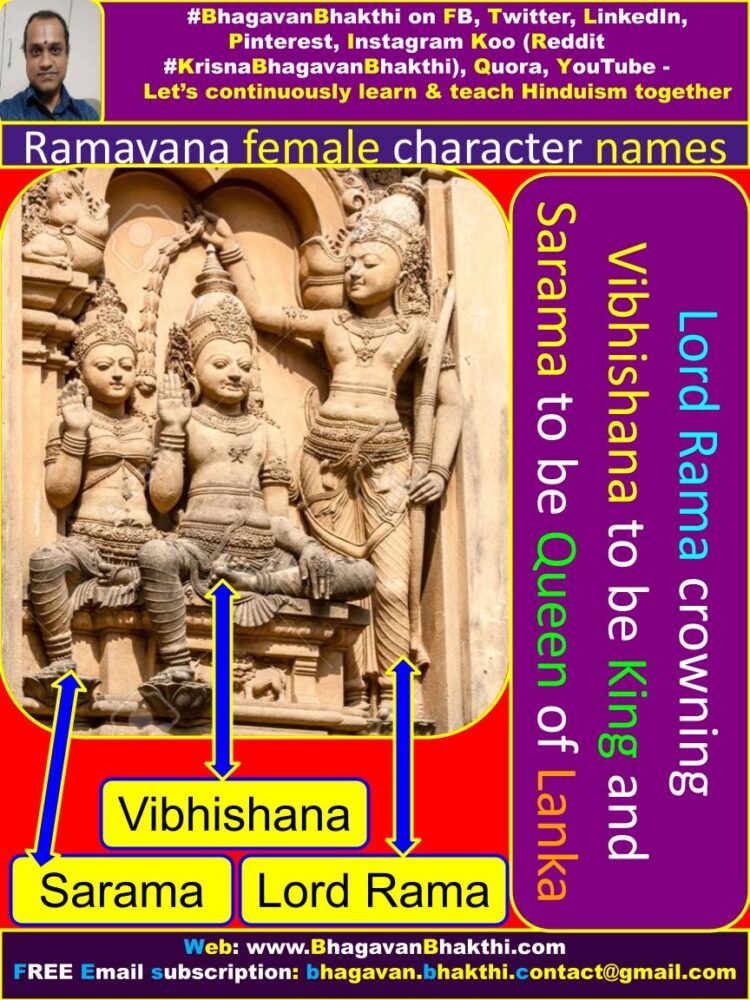 Shurpanakha : Here Shurpanakha means, someone who has sharp nails. Shurpanakha was the daughter of Vishrava Rishi (father) and Kaikasi (mother)

Shurpanakha was the younger sister of Ravana, Kumbhakarna and Vibhishana. Her husband name was Vidyutjiva.

Lakshmana cut off Shurpanaksha nose and left ear and sent her back to Lanka. This happened in today’s Nasik in Maharashtra and thus the name Nasik (In Sanskrit nose means nasika). 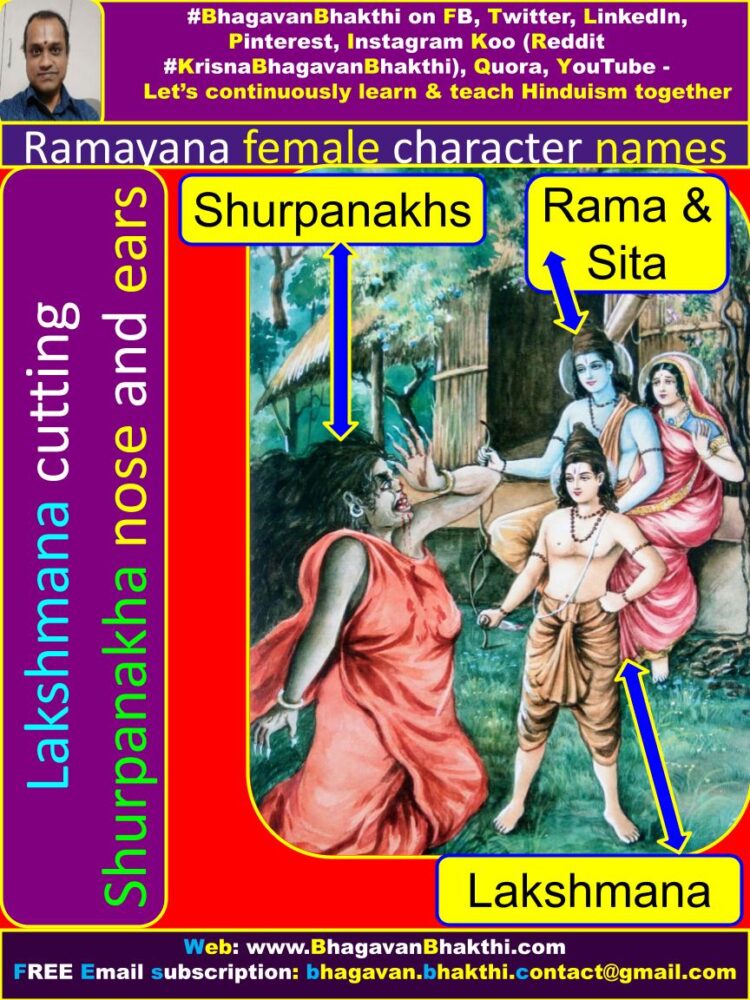 When Mayasura visited Svarga Loka, he saw Hema and married her. They had 2 sons and their names are Mayavi and Dundubhi, and daughters Mandodari and Dhanyamalini.

Hema as she was an apsara and thus can’t stay on earth for long time and she later left all of the above and returned to Svarga Loka.

Ganga (Goddess) : Goddess Sri Ganga Devi is a divine being and the daughter of Himavan (father) and Mainavati (mother).

Goddess Sri Ganga is not an earth being and she belonged to Svarga Loka and thus she was given back to the Devatas (Demigods).

Later, with the intense tapas (penance) of the King Bhagiratha, she came down to earth as Bhagirathi. 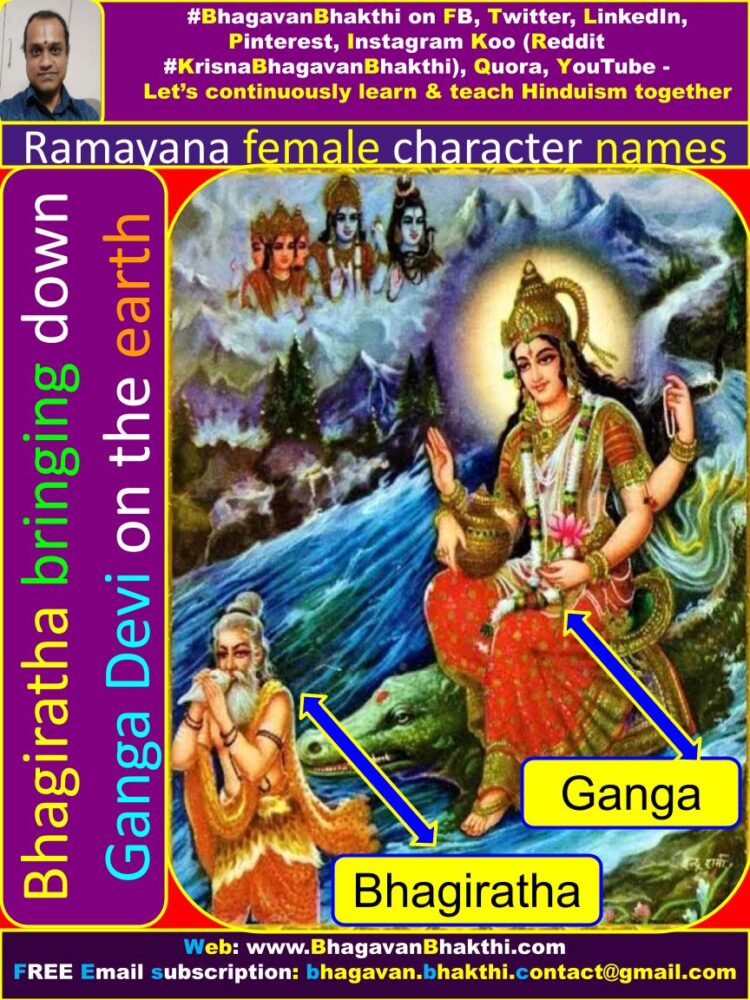 More information will be added to this post on regular basis. Please visit after some time to get more updated information about this post and other posts of this website.

To know about “Ramayana information“, kindly click the below link:

To know about “Mahabharata information“, kindly click the below link: