List of Maharishi (Rishi), their parents, wives and children names

Just before moving towards to know about “List of Maharishi (Rishi), their parents, wives and children names“, let us know few basic and important information. 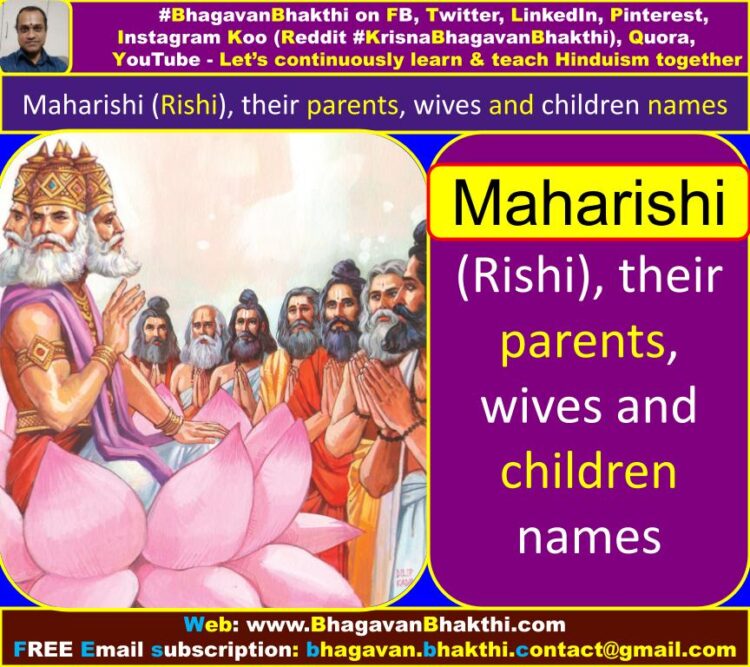 A Rishi (ऋषि) (Maharishi) is someone who has accomplished something divine.

A Rishi is a simple sage with simple or medium level knowledge about Lord Vishnu and other Devatas (Demigods).

While a Maharishi is someone who has achieved a greater or higher level knowledge about Lord Vishnu and other Devatas (Demigods).

Later comes the Brahmarishi who would have achieved exceptional level knowledge about Lord Vishnu and other Devatas (Demigods). E.g., Vashishtha, Vishwamitra, etc.

A Rishi (ऋषि) (Maharishi) is the one who has gained the great divine knowledge about Lord Sri Vishnu and other Devatas (Demigods). 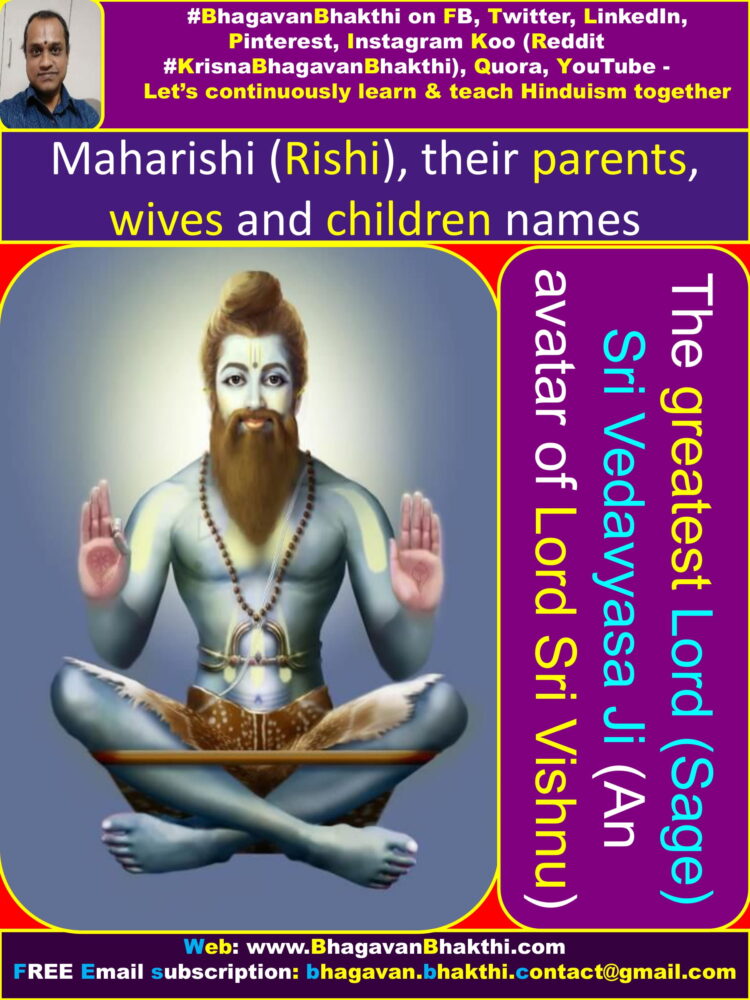 Rishis (Maharishi) are the one who compose the divine hymns on Lord Sri Vishnu and other Devatas (Demigods).

And thus many of the divine Rishis (Maharishi) composed many hymns on Lord Sri Vishnu and other Devatas (Demigods).

Rishis (Maharishi) are the one who do the ‘yagna‘ for multiple reasons as given below:

To get rainfall, to get rid of Rakshasas (Demons), to make Lord Sri Vishnu & Devatas (Demigods) happy & satisfied etc.

List of Maharishi (Rishi), their parents, wives and children names are as given below: 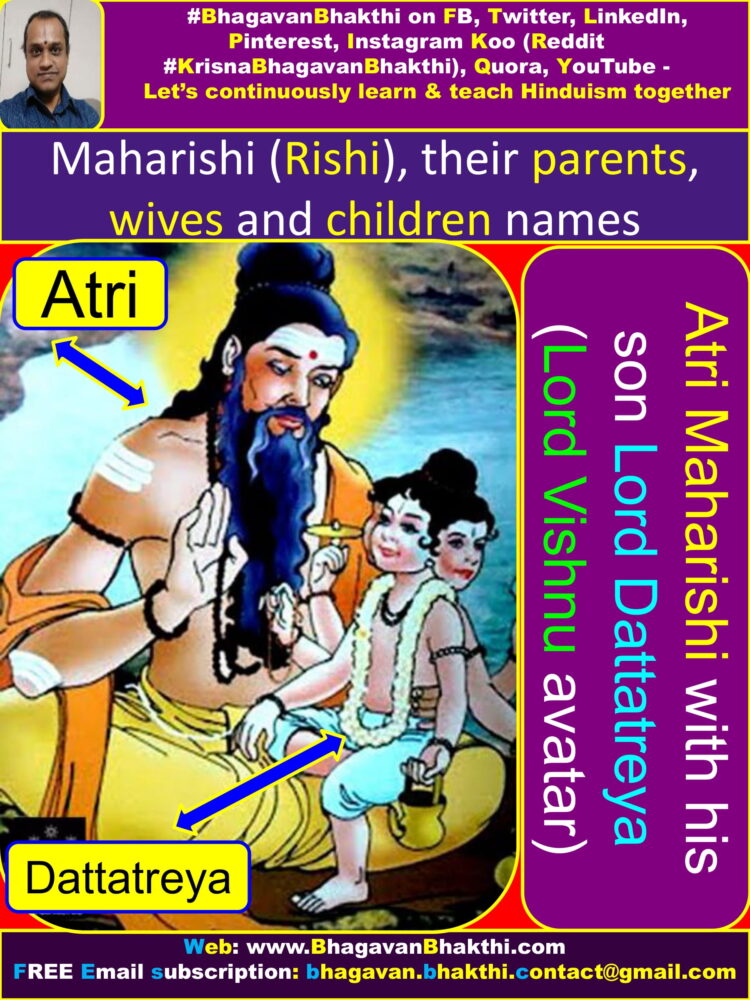 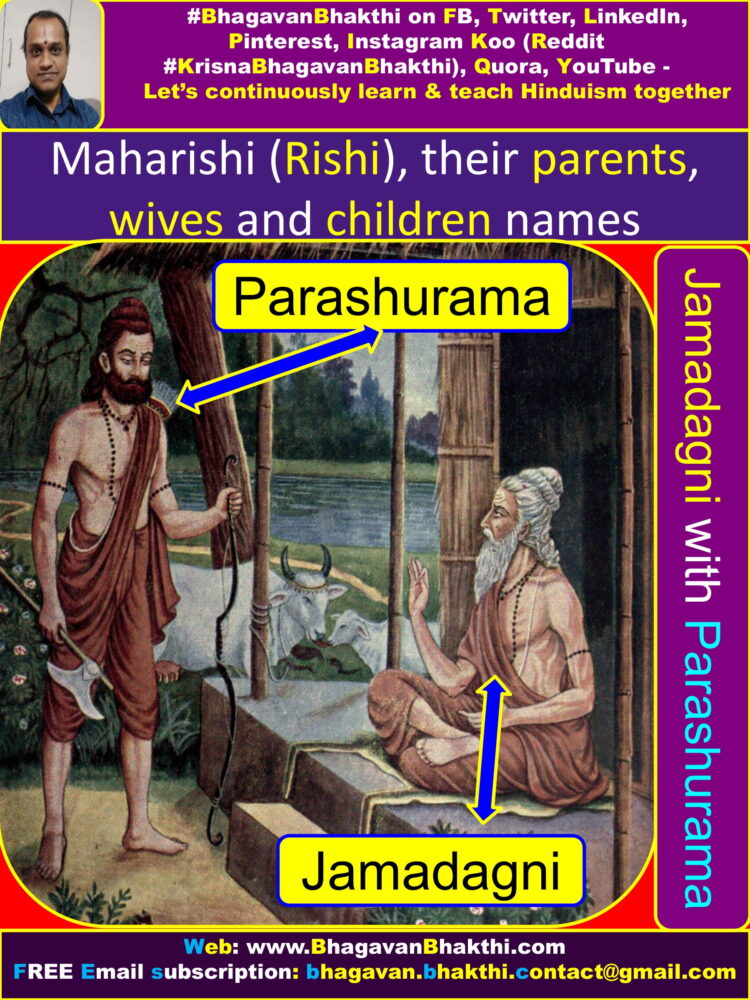 Children – Shatananda [He was the Guru of Seeradhwaja (Janaka Maharaja – Father of Goddess Sri Sita Devi) and others.

Gautama Maharishi is one of the Saptarishis (One among the Seven Great Sages). 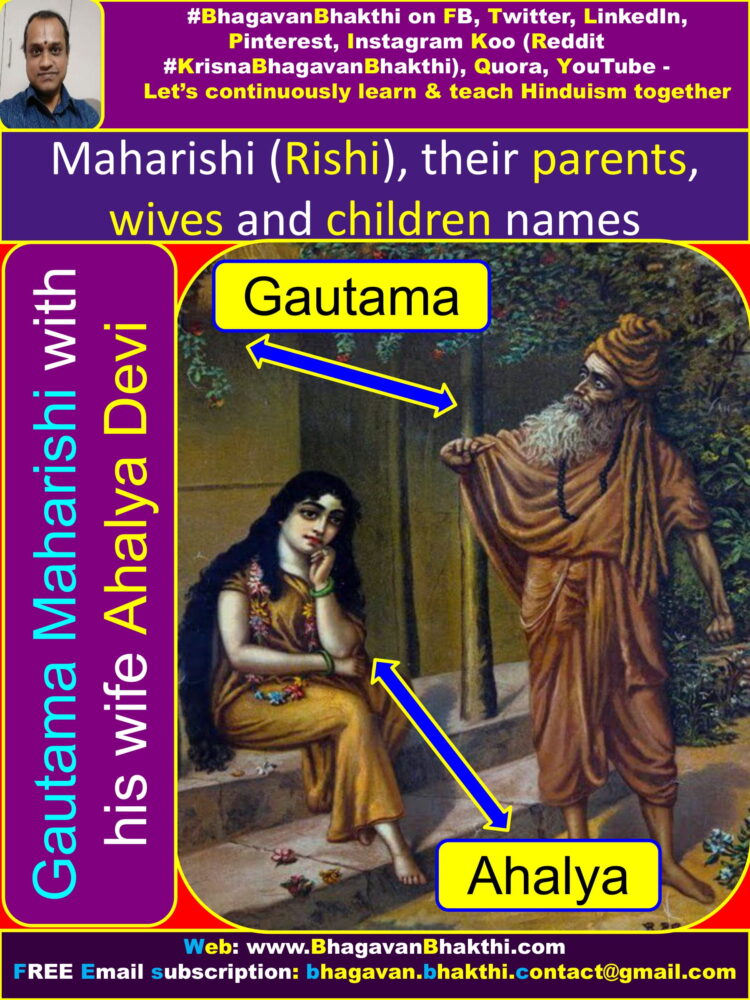 Wife – Susheela Devi, Children – Garga, Drona (He was an avatar of his own father Brihaspati) and Ilavida. 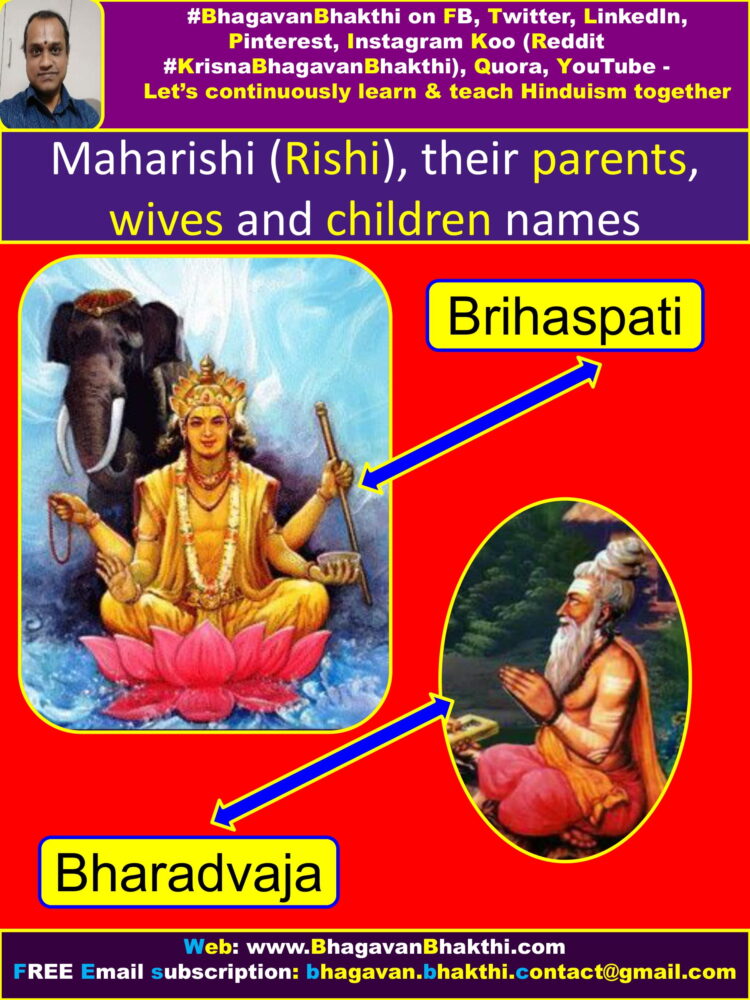 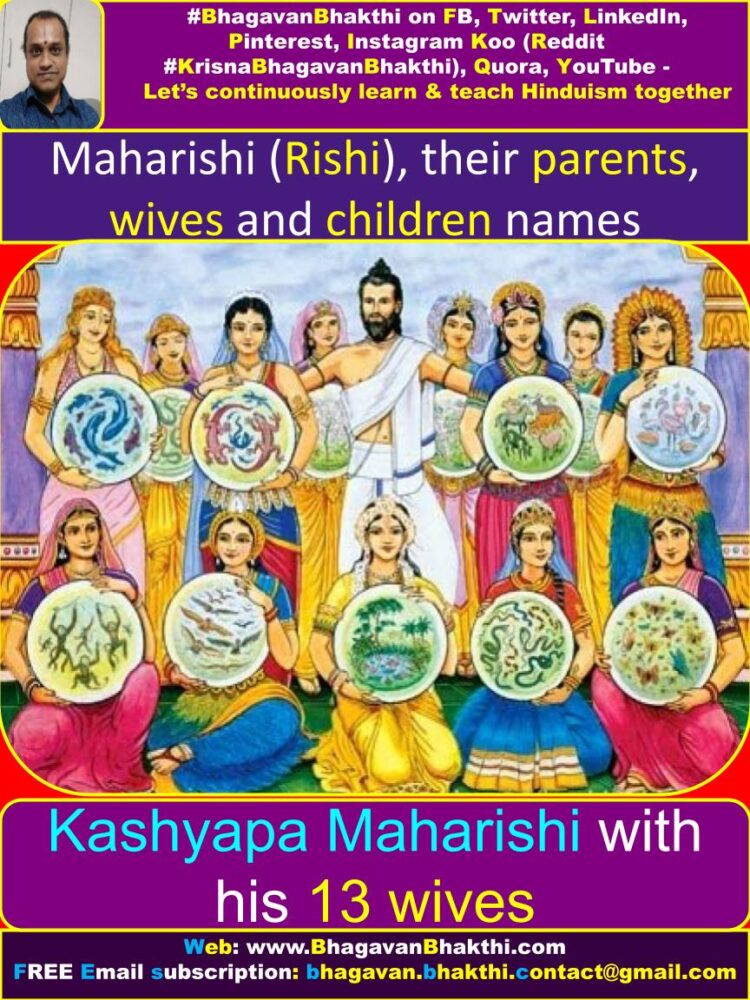 Vashishtha Maharishi is the Guru of all the Suryavansh (Suryavamsha) (Solar Dynasty) (Lord Sri Rama lineage) Kings starting from Ikshvaku. 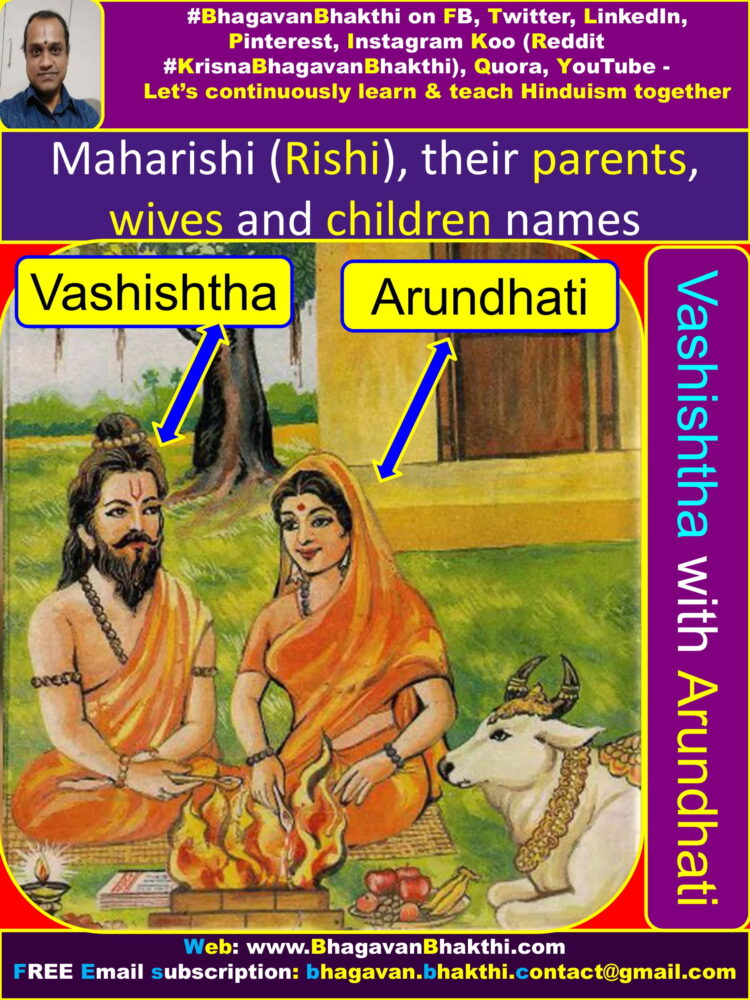 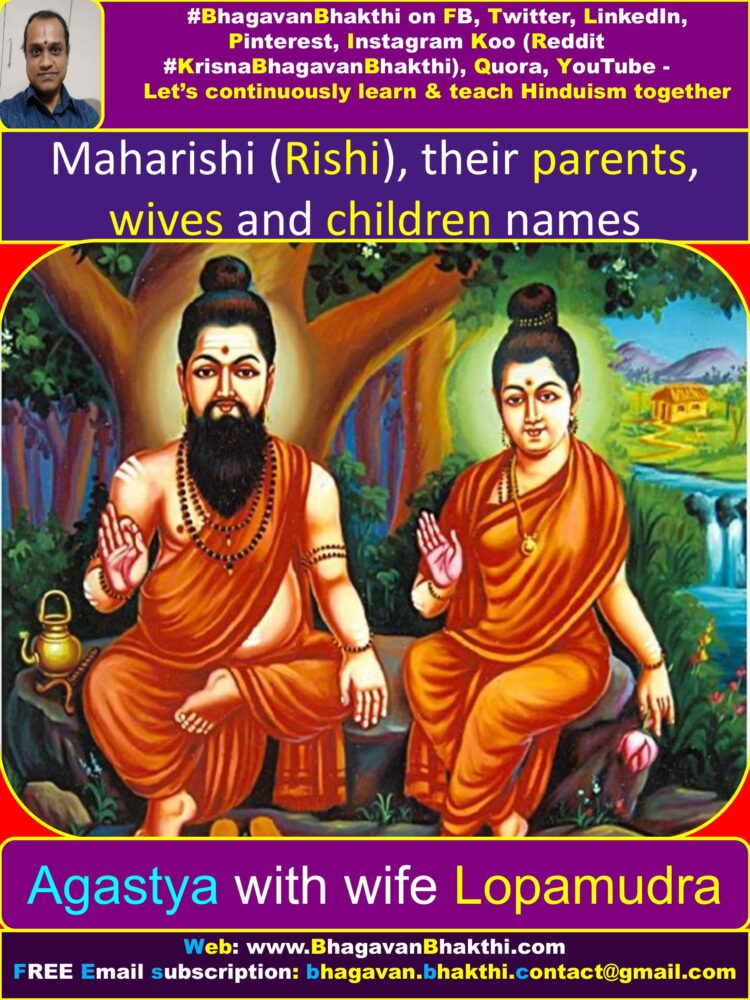 Bhrigu Maharishi is the one who kicks Lord Vishnu on his ‘vakshasthala’ (Chest part of Lord Sri Vishnu).

For this reason we got Lord Sri Srinivasa (Venkatesha) (Balaji) temple in Tirupati and Sri Mahalakshmi temple at Kolhapur. 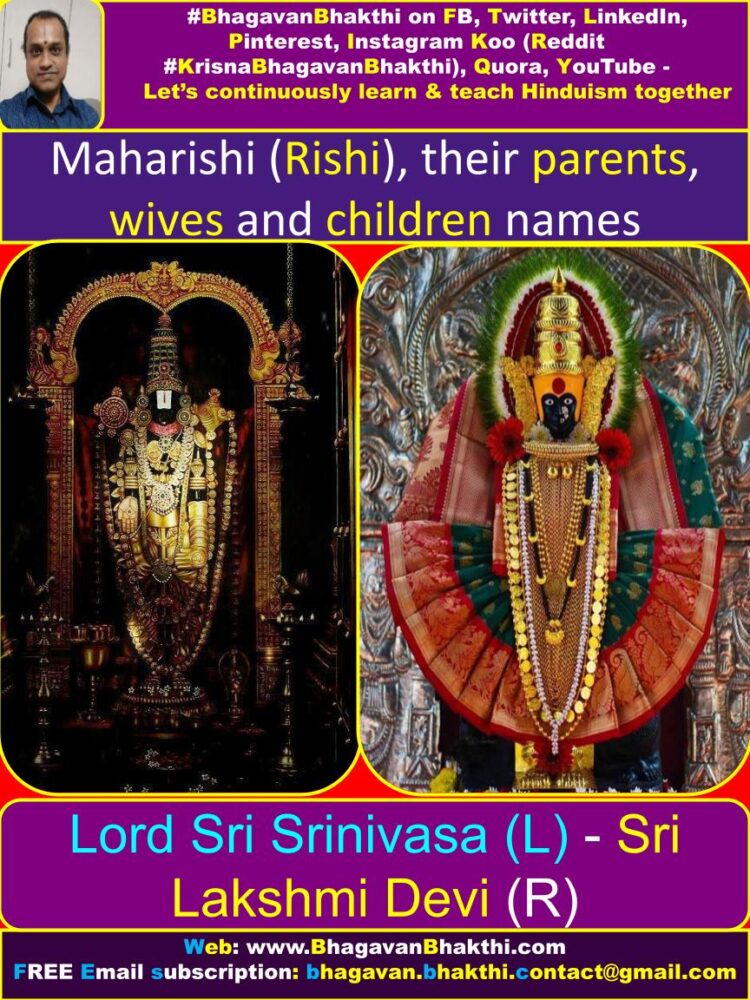 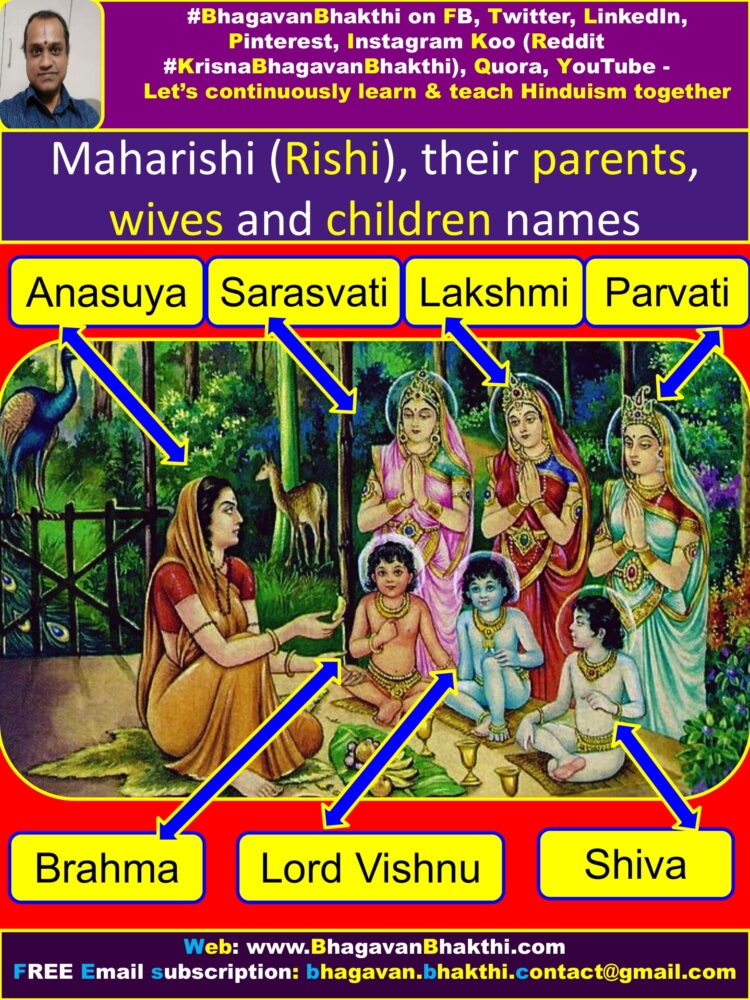 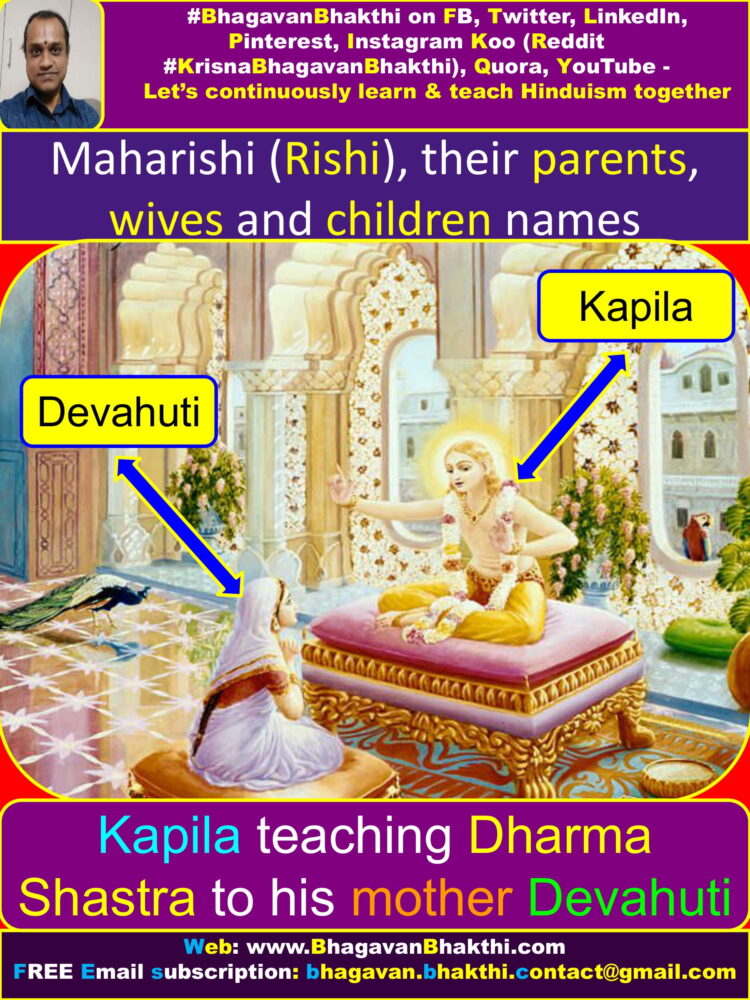 Shringi = He had Deer’s one horn and thus he is known as Shringi.

Ekashringa = Eka + Shringa = One + Horn = Born with one horn (Deer) and thus he is called as Ekashringa.

Parents – Vibhandaka (father), Wife – Shanta (She is the daughter of Dasharatha Maharaja).

In this divine ‘Putra Kameshti’ yagna, even the great Maharishi Vashishtha was also present. 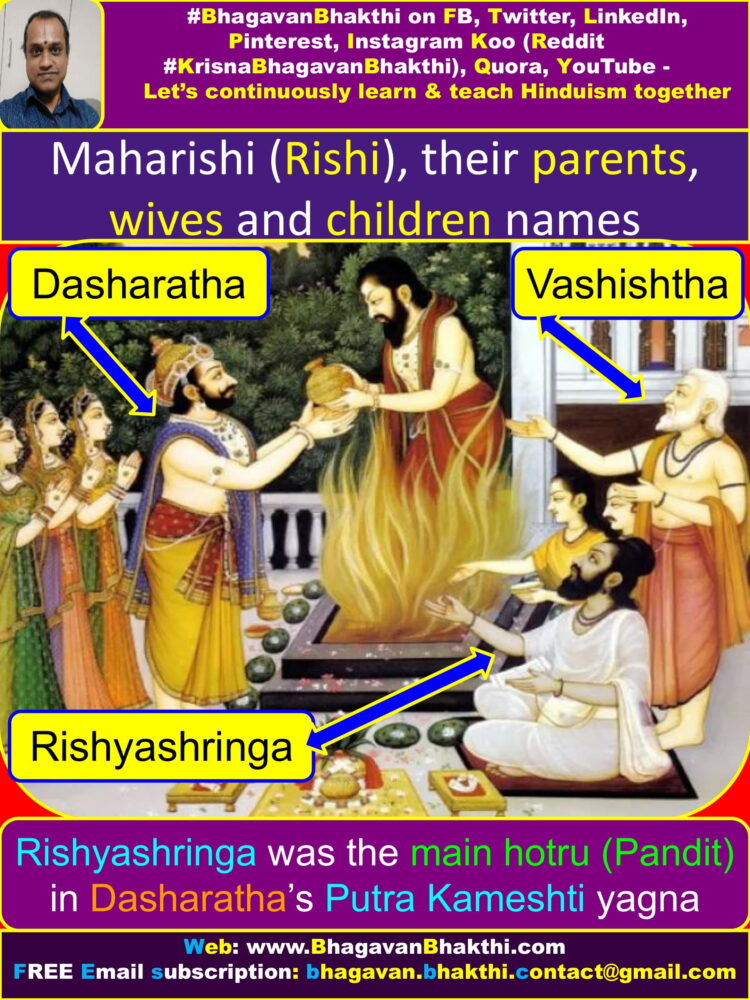 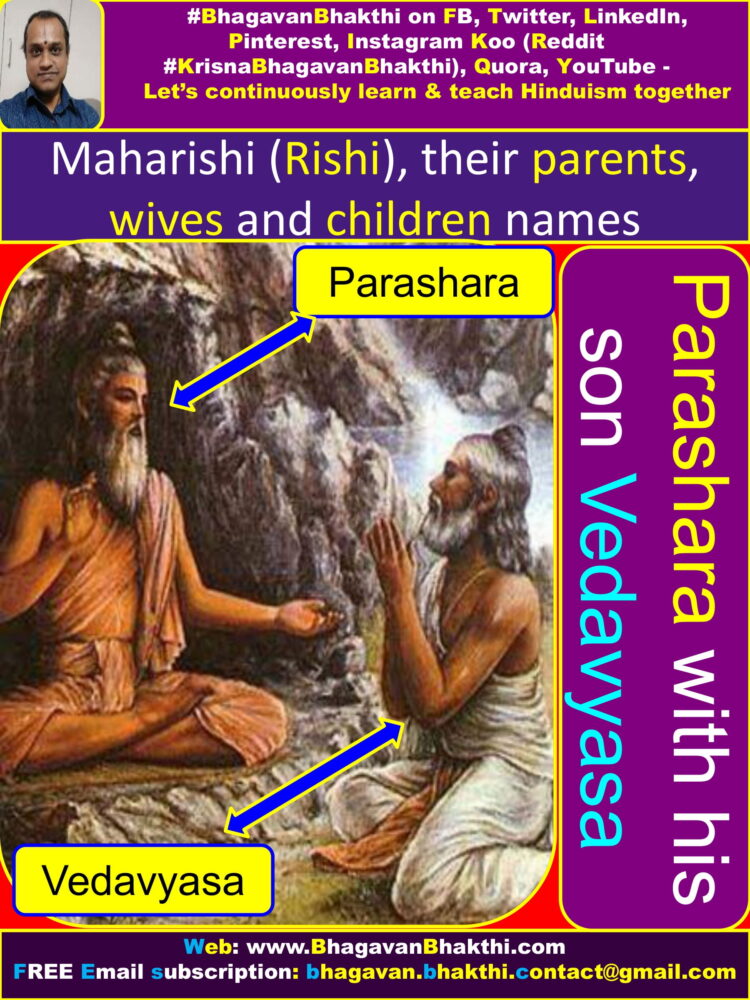 Parents – Parashara (Father) and Satyavati (Mother), Wife – Vatikā, Children (from Vatikā) – Shukacharya (son) (He is an avatar of Lord Shiva),

Children through Niyoga – Dhritarashtra (from Ambika), Pandu (from Ambalika), Vidura (from Parishrami). 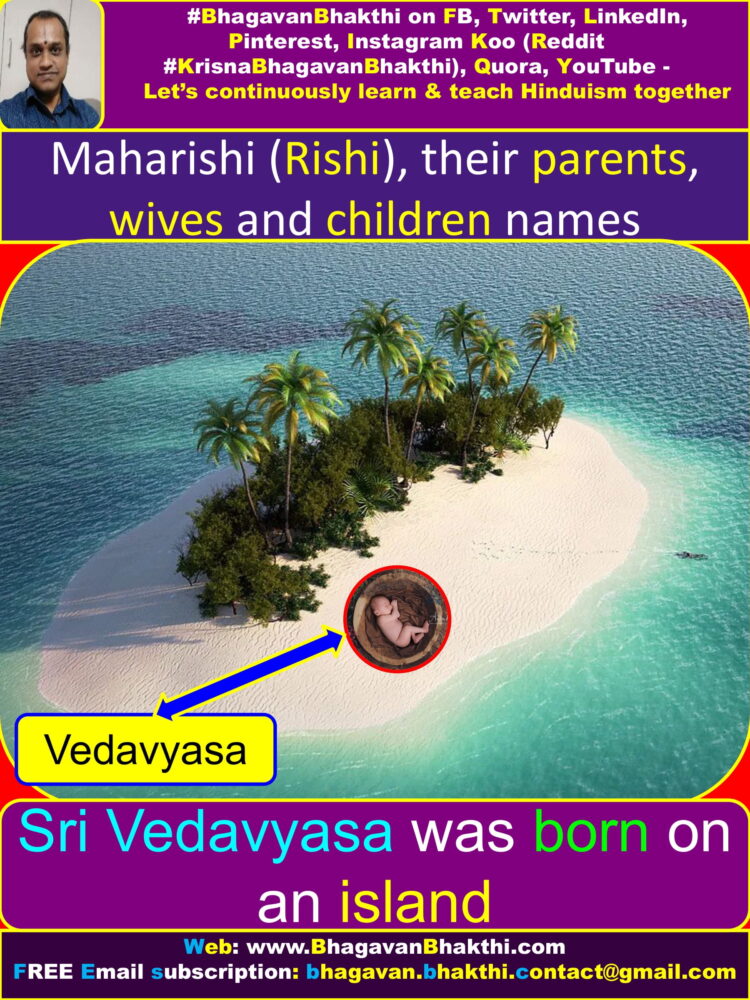 Markandeya Maharishi is one among the Chiranjivi (Will live very long on this earth).

Lord Shiva is called as ‘Mrityunjaya‘, as he saved Markandeya from Lord Yama. Mrityu is another name of Lord Yama.

Since Lord Shiva fights against Lord Yama and wins the battle, Shiva is called as ‘Mrityunjaya‘ [(Mrityu + Jaya = Winning over Mrityu (Yama)]. 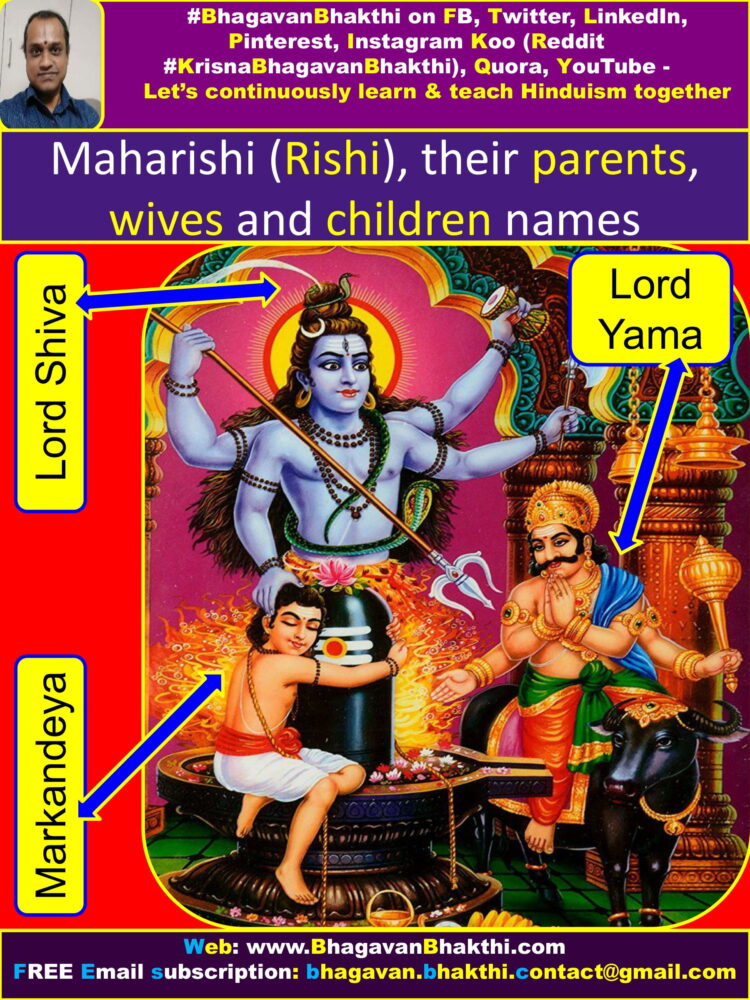 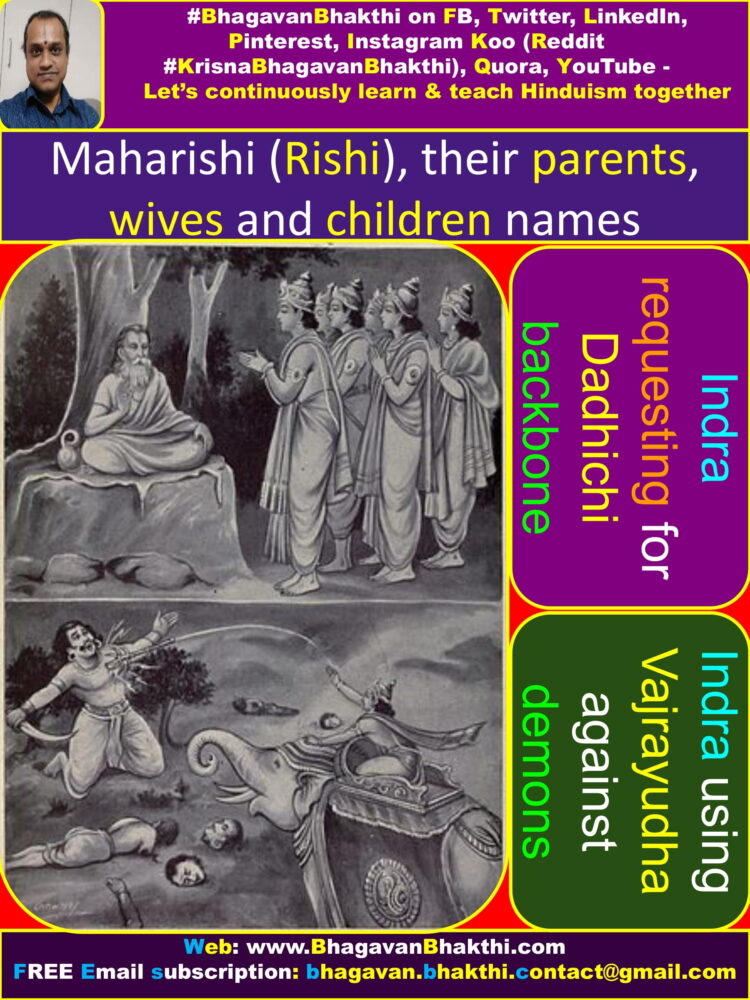 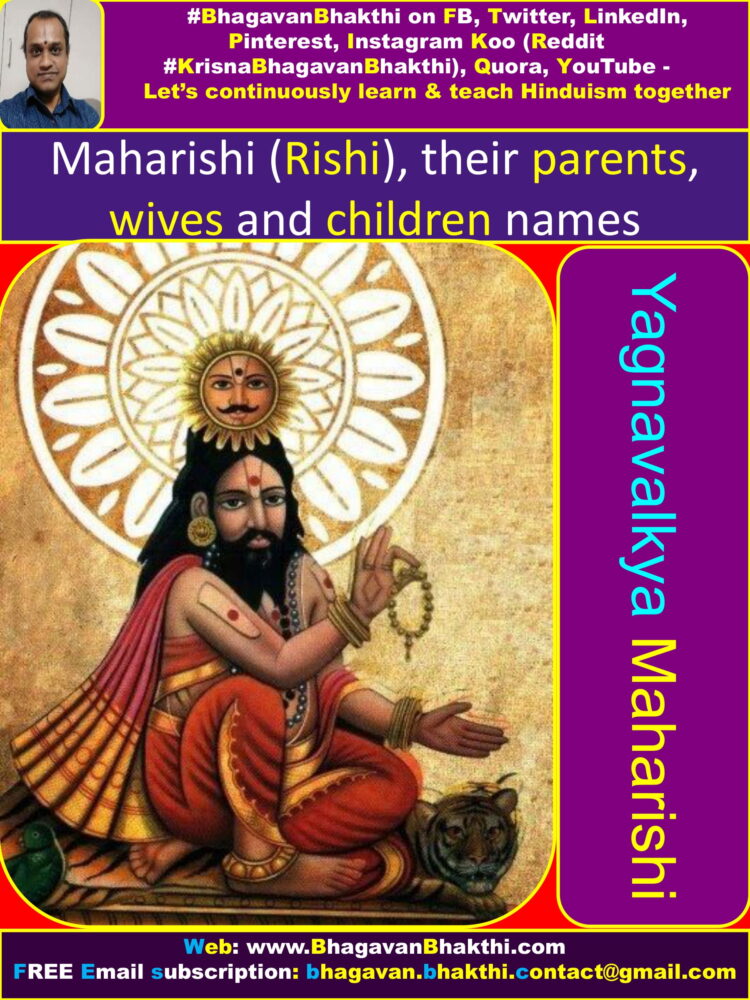 Guru (Teacher) – Shukracharya. Kacha Maharishi had learned Mrita Sanjivini Vidya (A hymn for bringing back the dead to back to life) from his Guru Shukracharya.

Kacha Maharishi disregards Devayani‘s (Shukracharya daughter) proposal of marriage, as he believed that Guru’s daughter is like a sister as per Dharma. 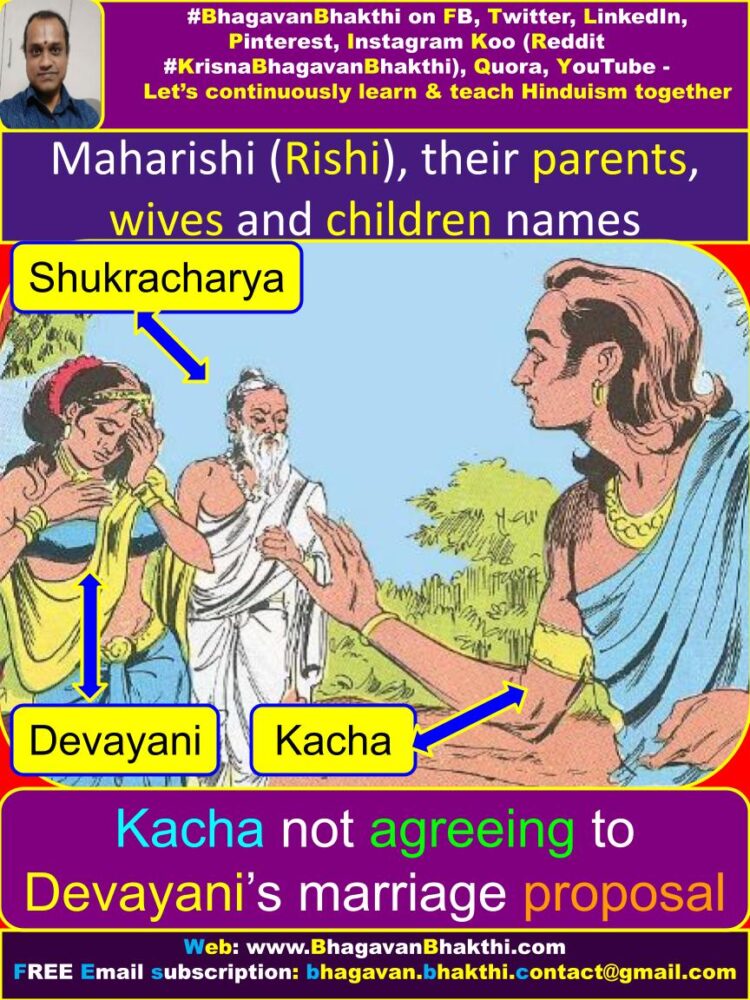 This great Vishwamitra Maharishi is the one who re-initiated the great ‘Gayatri Mantra‘ to the world. 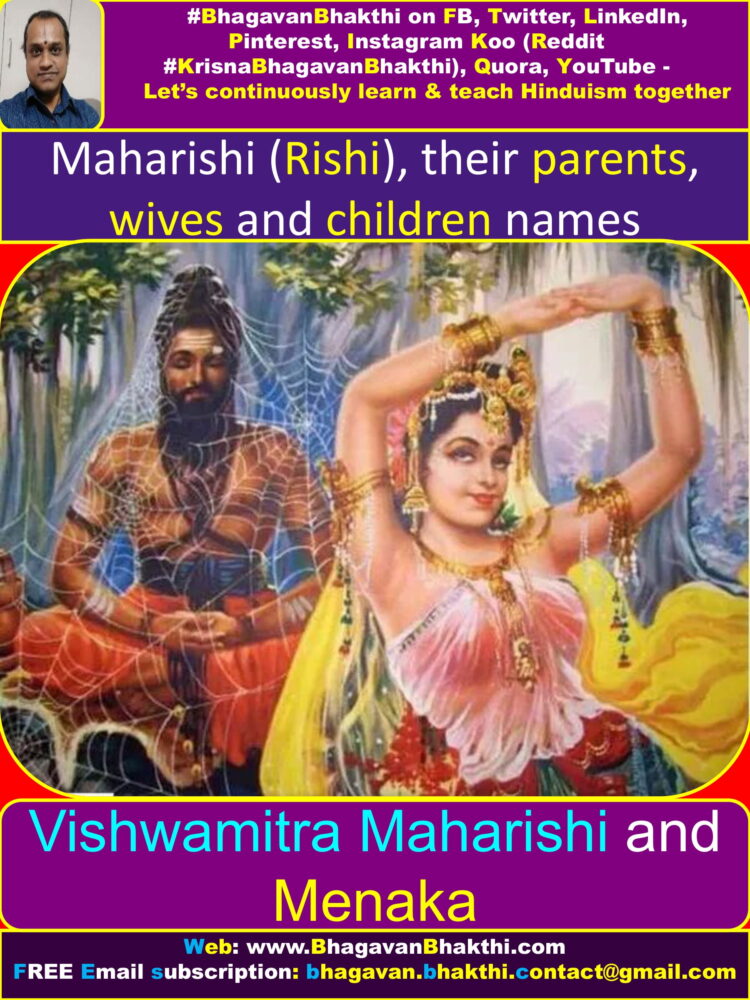 Therefore, Nachiketa literally means “The one who does not let his energy be wasted in an unwanted cycle or loop“.

Nachiketa as a very young boy goes to Yama Loka with material body itself and learns ‘Atma Vidya‘ from Lord Sri Yama Deva. 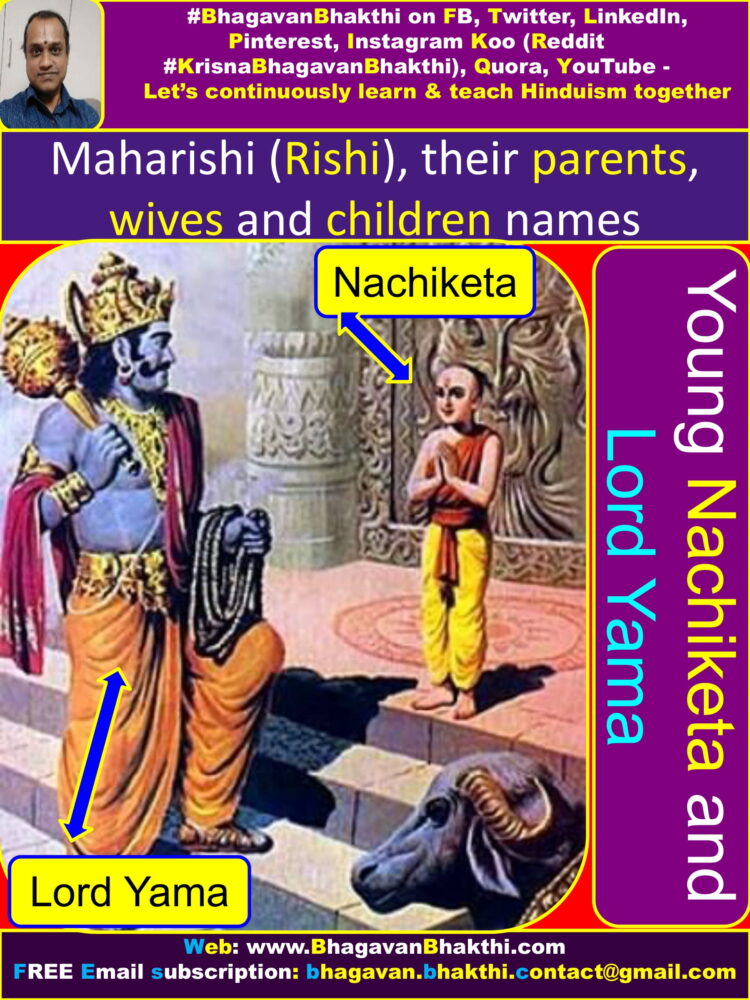 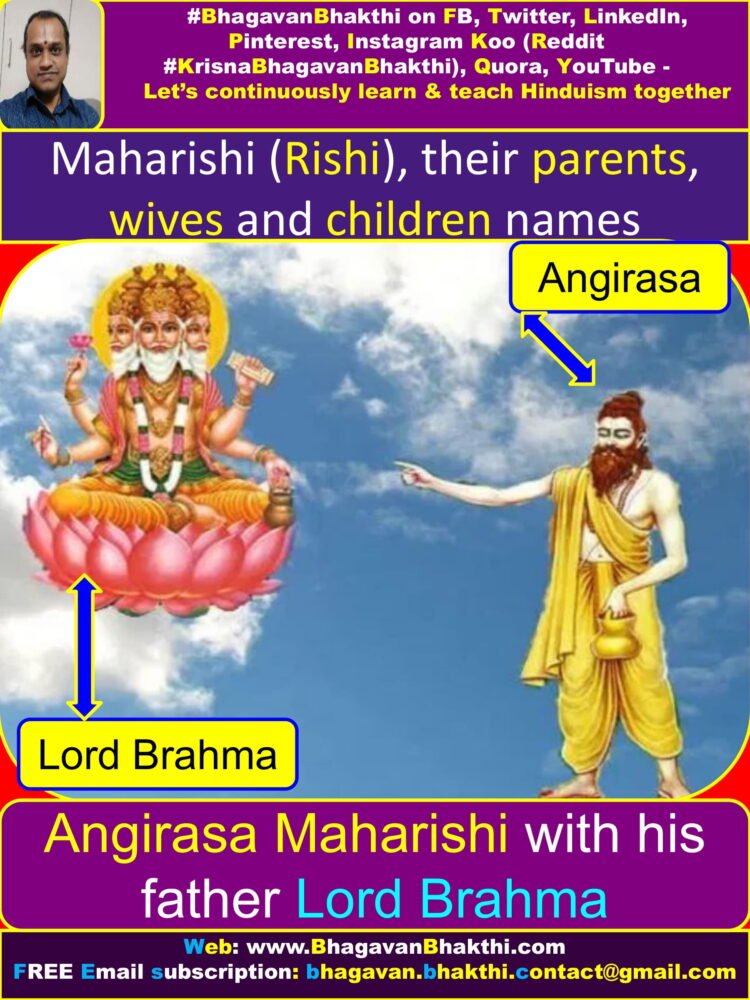 Children – Gautama and others (From Pradeshwari), Kakshivat and eleven sons (From a Shudra woman) and Anga, Vanga, Kalinga, Pundra, Cumbha (From Sudeshna). 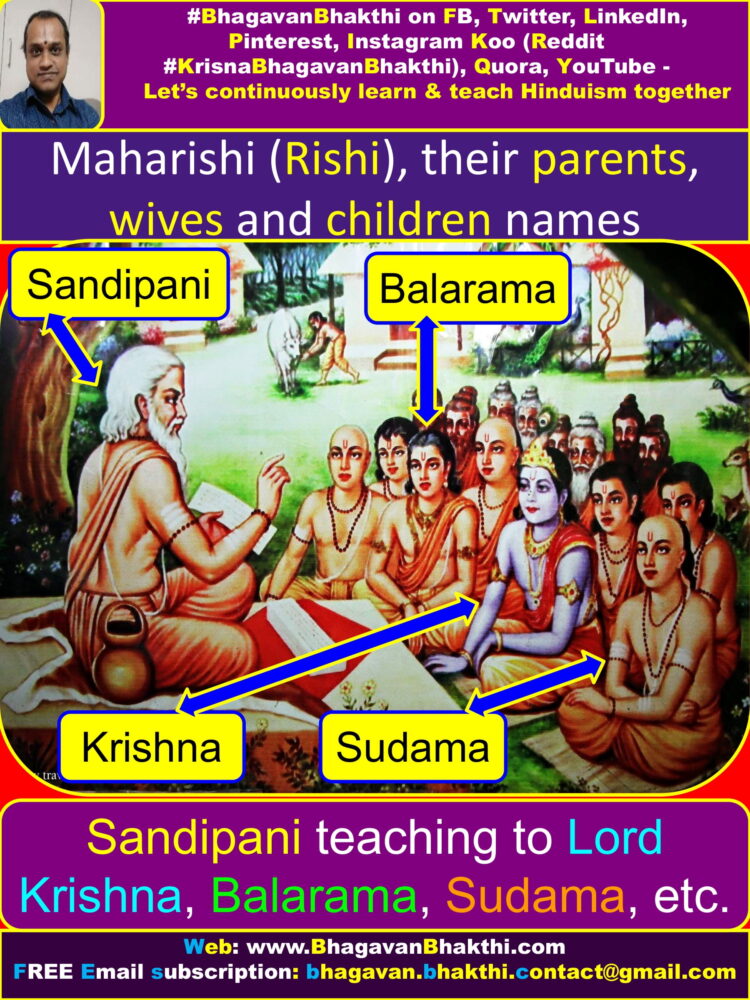 Sandipani son was rescued by Lord Krishna from the clutches of a demon called as ‘Shankhasura‘ (शंखासुर / śaṅkhāsura). 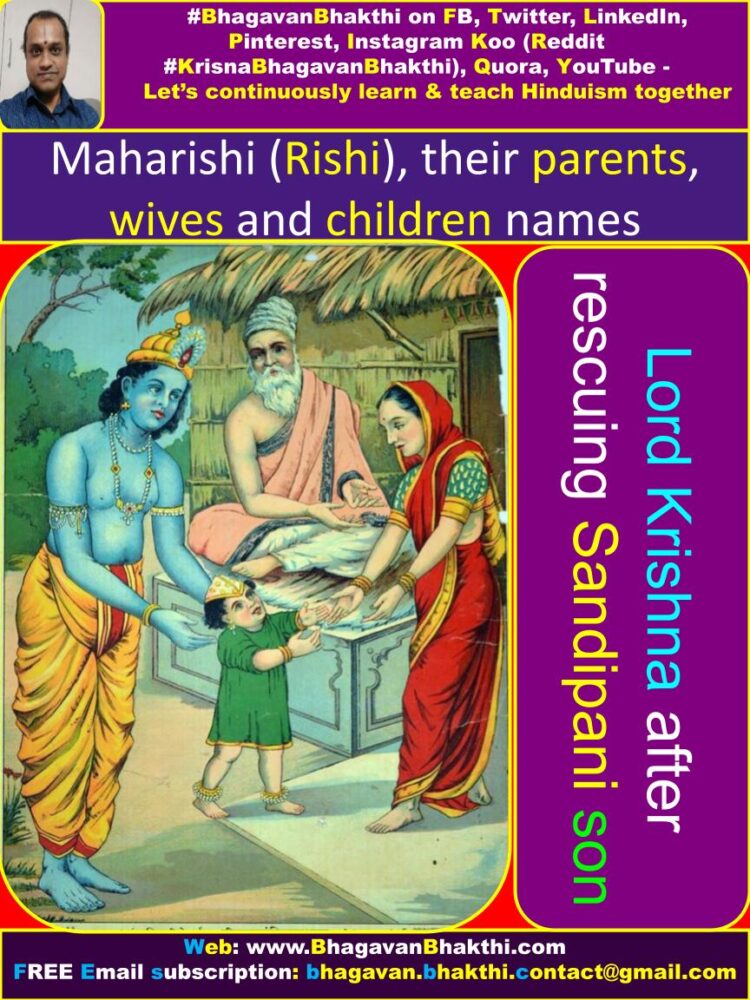 Garga Rishi was the ancestral teacher of Yadavas (Lord Krishna) and Gopas. Also he is the ‘Kula-Guru‘ (Family Guru) of Lord Krishna family.

It was Garga Rishi who made the ‘nama karna‘ (naming ceremony) of both Krishna and Rama (Balarama) names. 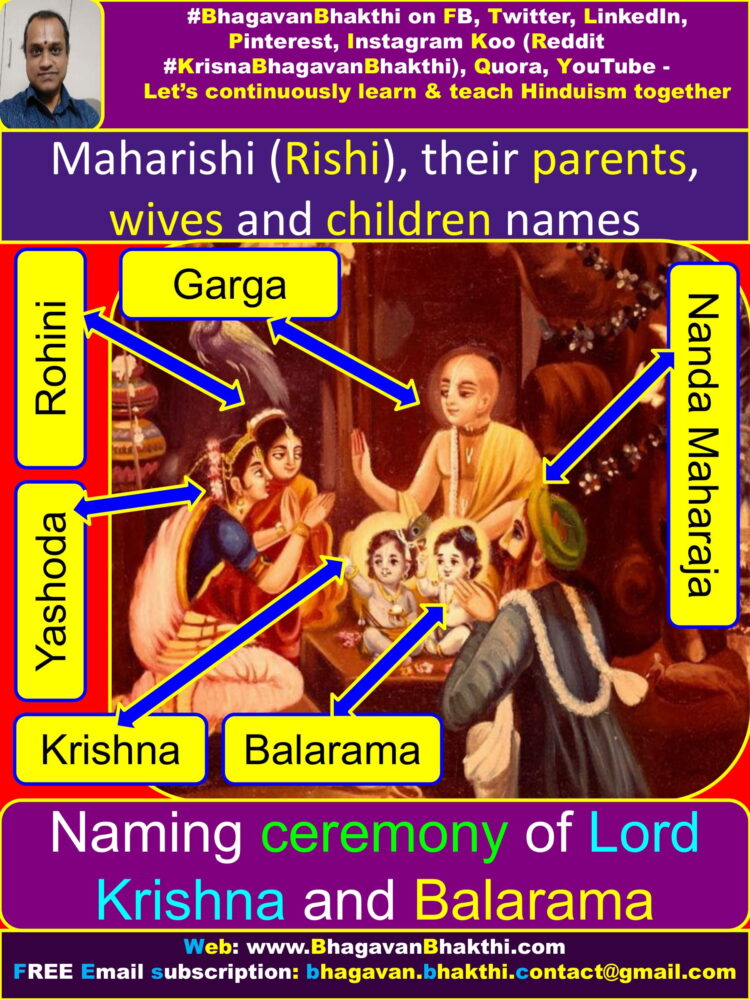 Note : On hearing that the Pandavas were told to go to forest exile, Maitraya Rishi advises Dhritarashtra to make peace with Pandavas.

Whereas, Duryodhana patted his own thighs out of arrogance and this enraged the Maitreya Rishi who cursed him to die due to broken thighs. 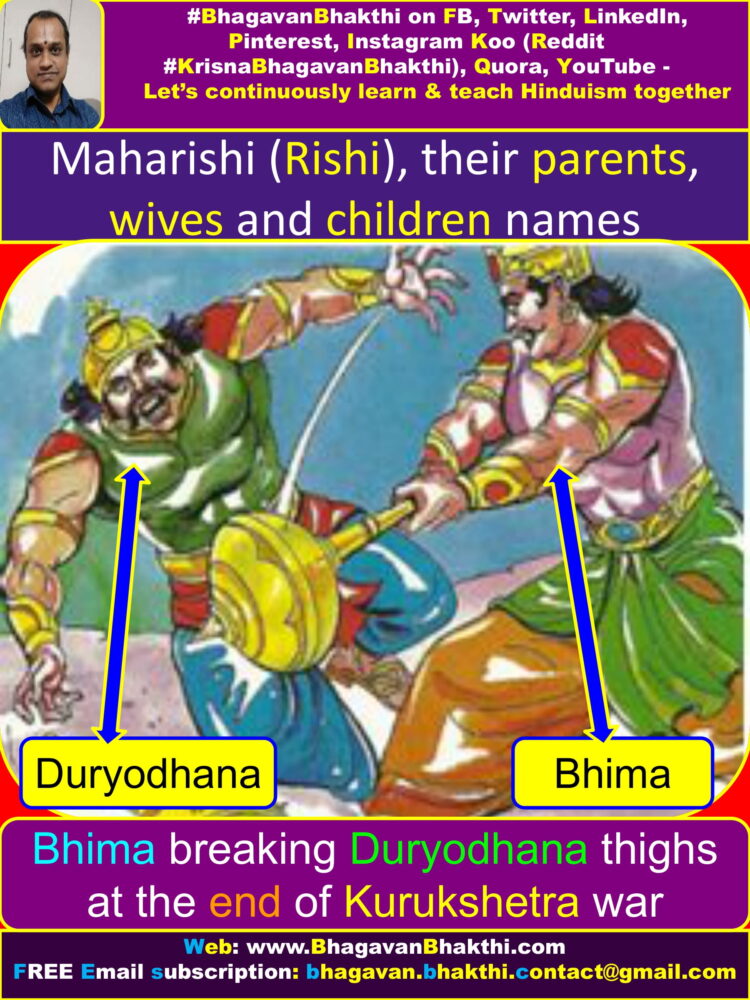 Shuka Muni (शुक मुनि) (śuka muni) : He is also called as Shukacharya. He is an avatar of Lord Shiva.

Shuka Muni (Shukacharya) is the one who preached the divine ‘Srimad Bhagavatam‘ to King Parikshita (Parishit). 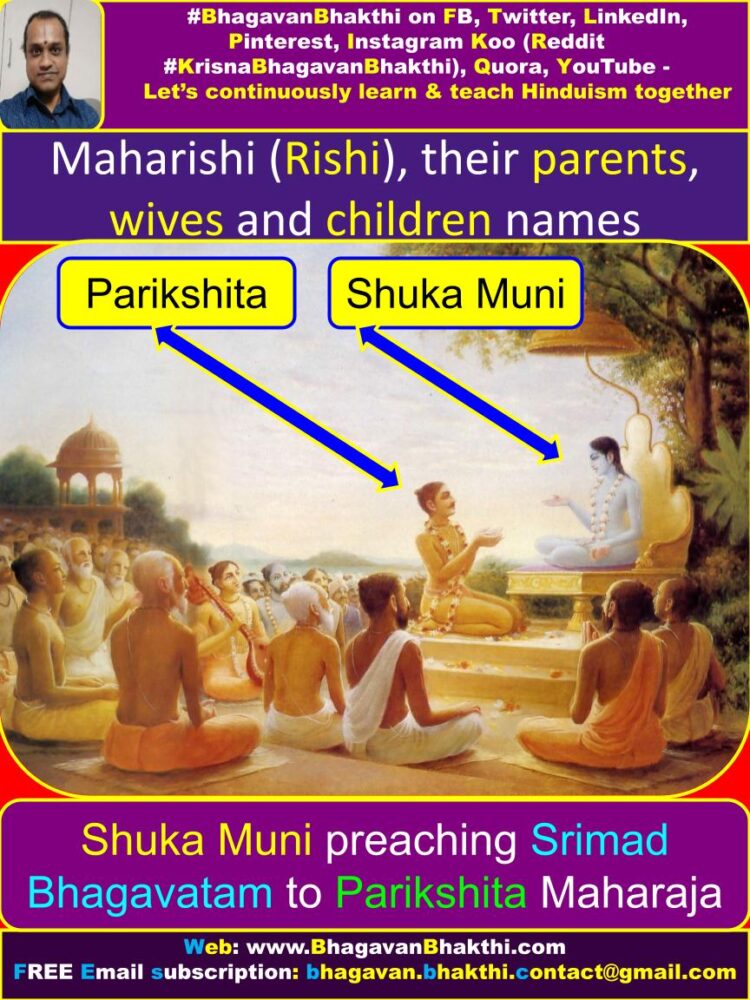 Mandavya is also called as ‘Ani-Mandavya‘ (Mandavya with a stake within), as he was kept on ‘Sooli‘ (stake). 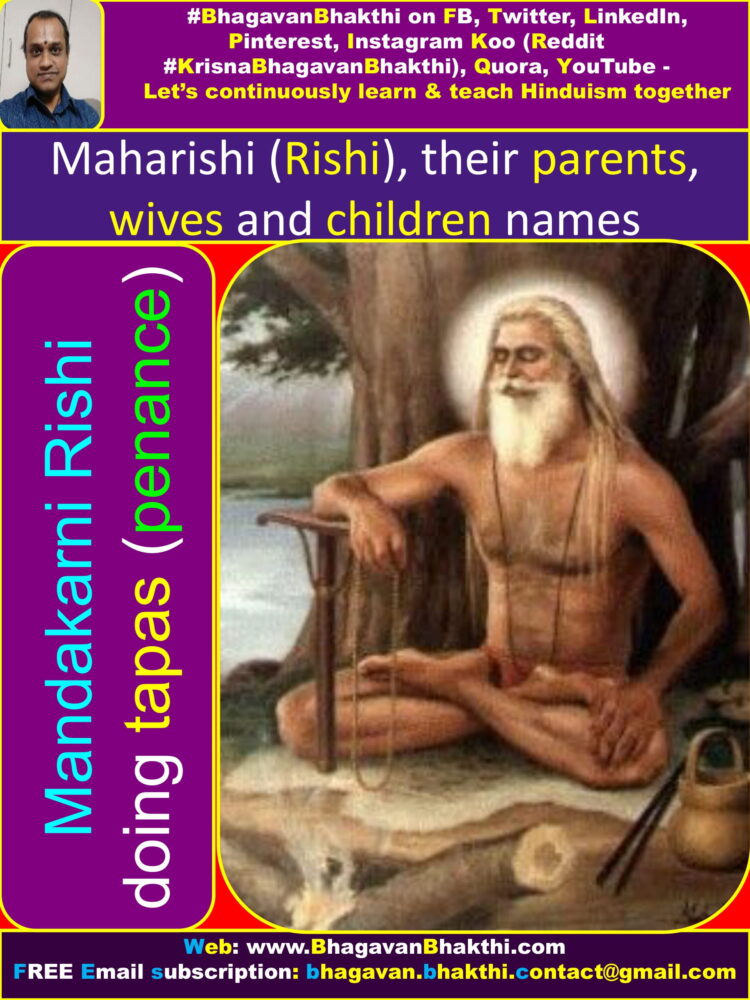 More information will be added to this post on regular basis.

Please visit this post again and other posts of this website (blog) to get the updated information.

To know more details of the Great Saptarishi (Seven Rishis), you can visit this below link: