What is rajaswala (menstrual period) in women in Hinduism

Just before moving towards to know about “What is rajaswala (menstrual period) in women in Hinduism“, let us know few basic and important information. 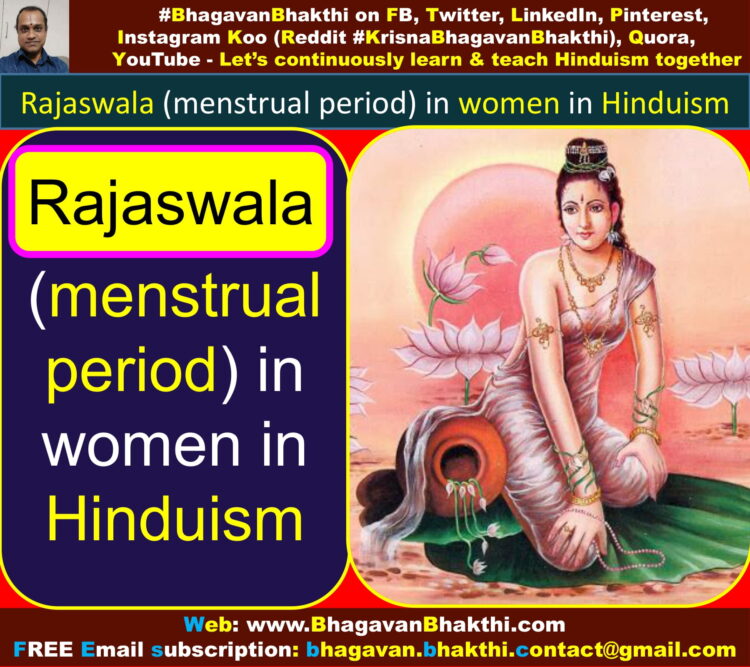 Rajaswala (रजस्वला) is a woman (period) who is in her monthly period timeframe.

In Rajaswala, ‘wala‘ means a woman in her monthly period timeframe.

One should never think that, “why only women have to face, so many problems“.

If women have some kind of problems means, even men have their unique type of problems and challenges.

Lord Vishnu has gifted to the world a great and rare entity called woman to this world.

Both women and men are completely dependent on each other, and both are very unique and special and both can’t live without each other.

With this information, let us move forward in knowing about “Rajaswala (menstrual period) in women“.

Let us know step-by-step about the Rajaswala (menstrual period) in women as per Hinduism:

During the Dvapara Yuga the great Chakravarti (Emperor) Yudhisthira requested Lord Sri Krishna to tell him about a Vrata (vrat) which can make shuddhikarana (purify) from all the paapas / sins. 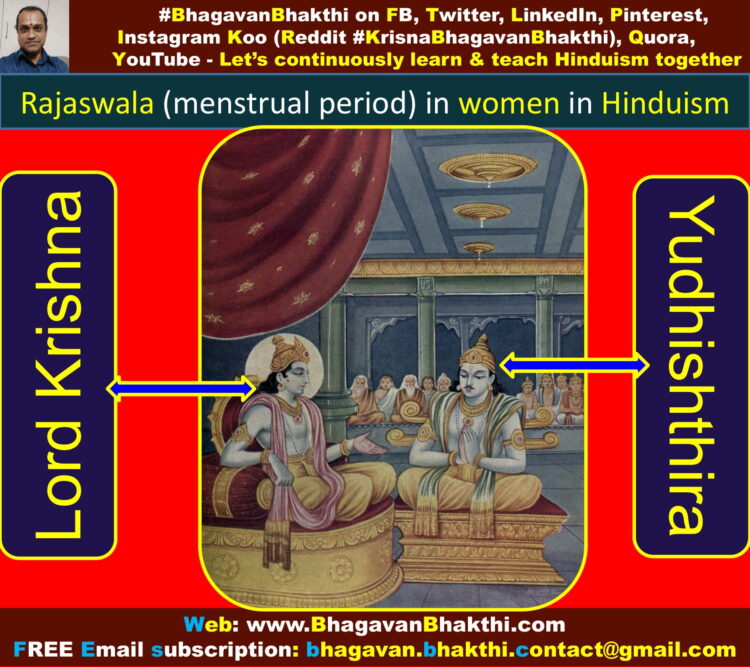 Thus, Lord Sri Krishna told Yudhisthira about the vrata (vrat) which was performed by women can free them from all their paapas / sins, which is termed as “Rishi Panchami”.

Women during their rajaswala (menstrual period) are not supposed to perform any work pertaining to the household / family works.

Invariably, those women need to take rest for the all the four days of rajaswala (menstrual period).

If a woman does all these works, that woman is sure of going to Naraka / hell.

That is why a women during her rajaswala (menstrual period) should be kept far from all, irrespective of whether she is a Brahmana or a Kshatriya or a Vaishya or a Shudra. 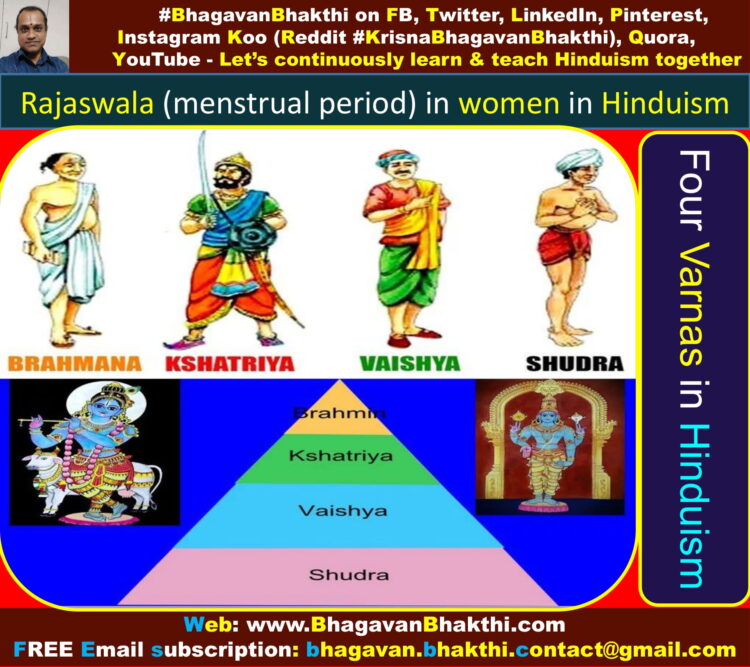 All the four varnas’ people must follow this rule.

Thus, this is the reason if one does Rishi Panchami pooja / worship, her sins during rajaswala Dosha will be purified.

What is this rajaswala (menstrual period) as per Hinduism 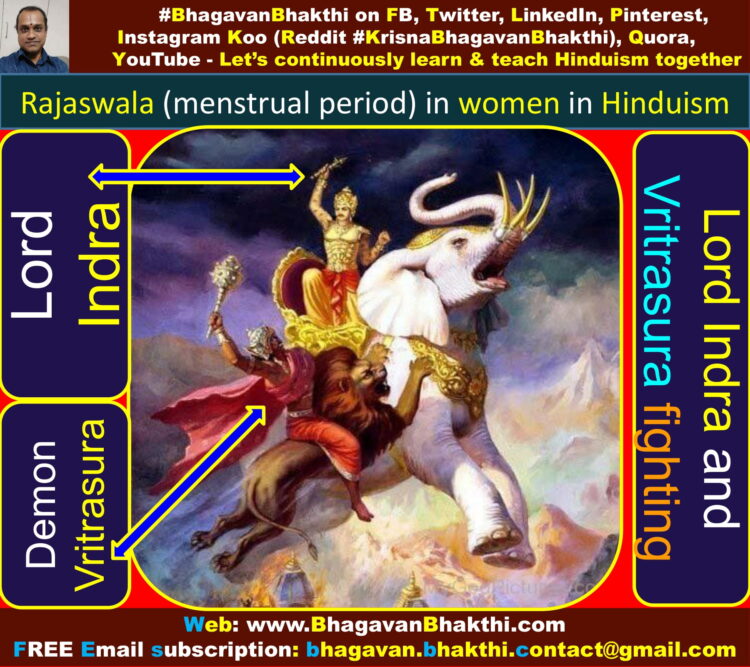 Lord Indra Deva got the ‘Brahmahatya dosha‘ (sin of killing a Brahmana), as Vritrasura although he was an asura (demon), Vritrasura was a son of a Brahmana.

Thus, killing a Brahmana will fetch us ‘Brahmahatya dosha‘.

After killing this asura (demong) Vritrasura, Lord Indra Deva got the dosha (sin).

Then Lord Indra Deva went to Lord Brahma Deva seeking some remedy to remove this ‘Brahmahatya dosha‘ (sin of killing a Brahmana).

How Lord Brahma Deva removed this ‘Brahmahatya dosha‘ (sin of killing a Brahmana) of Lord Indra Deva is as given below: 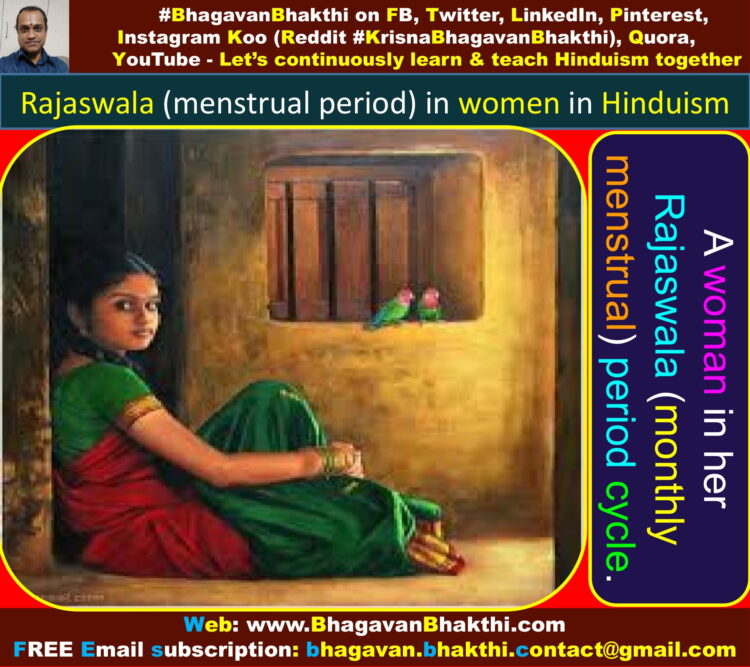 That is why rajaswala (menstrual period) women are supposed to be far from all the chatur varna (four varna) people.

On the first day of her rajaswala (menstrual period), women will be impure like a Chandala stree / lady.

On the second day of her rajaswala (menstrual period), women will be impure like a Brahma Ghatini.

On the third day of her rajaswala (menstrual period), women will be impure like a dobhi.

But still can’t do all the puja, pitru karya, cooking, etc. on fourth day itself.

But anyhow, that woman can attend to her daily duties other than Bhagavan’s seva (service), cooking.

On the fifth day only, she will be completely pure. 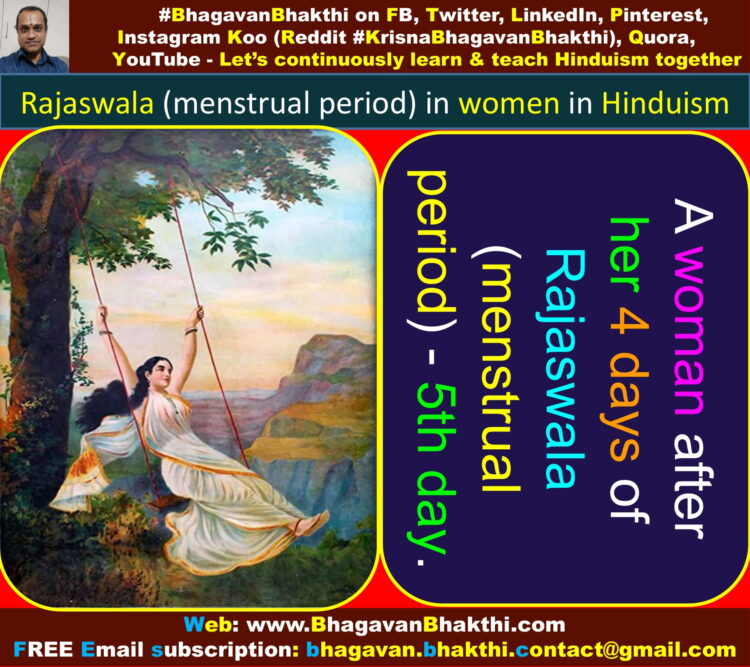 Lord Sri Krishna tells one more story about Rajaswala (menstrual period) which is as given below:

In that desha / country there was a Brahmana called Sumitra and this Sumitra’s wife was called as Jayasri.

This woman Jayasri who was also looking after the farming work.

Once this woman Jayasri had rajaswala / menstrual period.

But without caring, Jayasri did all her regular work, and also Jayasri touched everything and every one without informing others that she was on the rajaswala / menstrual period.

After few days had past, Jayasri passed away.

Also, Jayasri‘s her husband Sumitra also passed away after some time.

Again after few days, in the same house both Sumitra and Jayasri were reborn as an Ox (Sumitra) and a Dog (Jayasri) respectively. 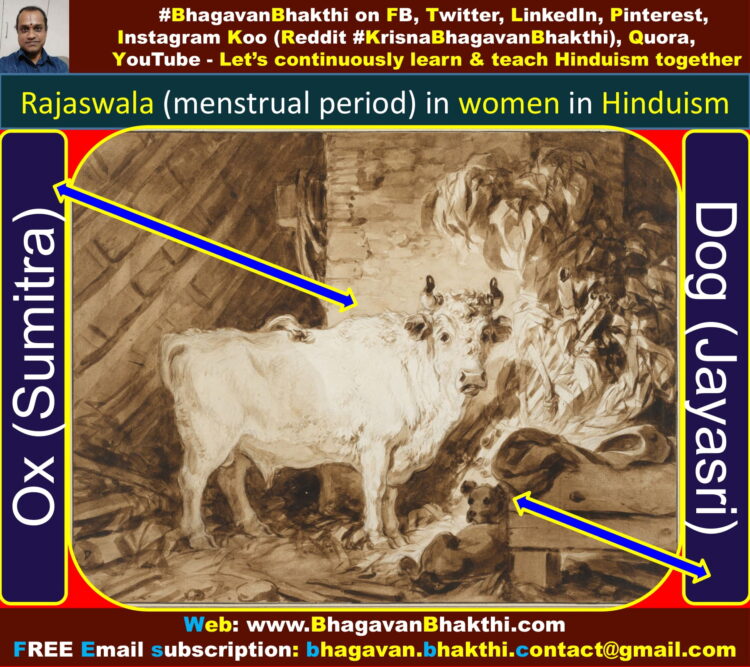 And they had the power of the jatismara (that is who can remember about their earlier janma / life).

Another story about Rajaswala (menstrual period) is as given below:

Sumitra’s son was Sumati and his wife was called as Chandravati.

This Chandravati was a ‘saha dharmacharini‘ (someone who follows her husband very well as per the Dharma).

One day, Sumati’s father’s Shraaddha day (yearly Shraaddha) came and he (Sumati) told his wife Chandravati to cook for the Brahmana ladies (all suhagans / suvasini) for bhojanam / food and which she did.

Chandravati kept the payasam (kheer) vessel on the stove itself.

A sarpam / snake’s poison was kept in that payasam (kheer).

While a dog (Jayasri) saw the Payasam (kheer) was been poisoned. 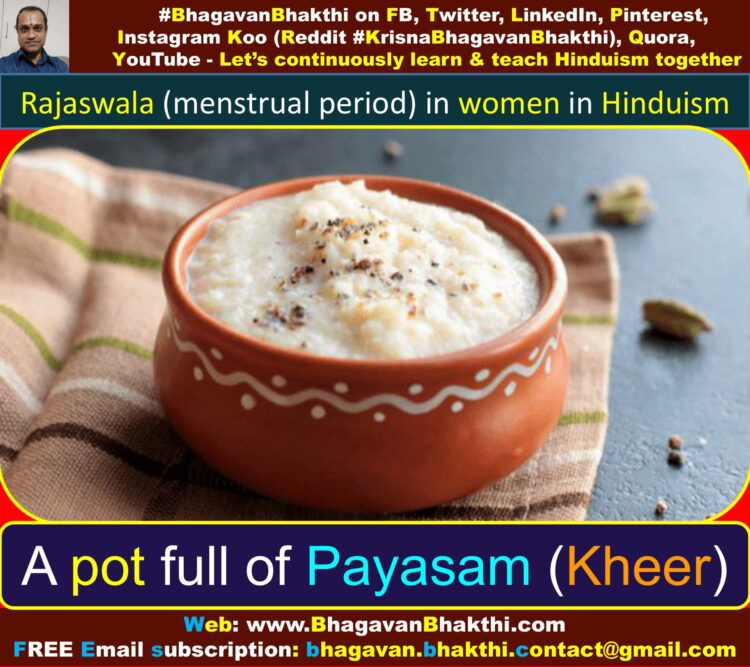 And thus that dog thought that, if the Brahmanas eat that payasam (kheer), they may die and her (Jaysri’s) son would get ‘Brahmahatya dosha‘ (Sin of killing a Brahmana).

Seeing that, the dog (jayasri) had touched the vessel, Chandravati got angry and started to beat that dog (Jayasri).

And finally threw that payasam (kheer) and prepared separate food for the shraaddha karya (shraaddha rituals).

Sumati did the shraaddha with enthusiasm and all the Brahmanas had good bhojanam / food.

Chandramati dig a pit and kept all the left overs after the bhojanam / food in a pit without even giving anything to the Dog (Jayasri) or the Ox (Sumitra) on that particular day.

Thus that Ox (Sumitra) told to Dog (Jayasri) that, their son had done the shraaddha (श्राद्ध / ಶ್ರಾದ್ಧ / śrād’dha), but was not given anything to eat to them. 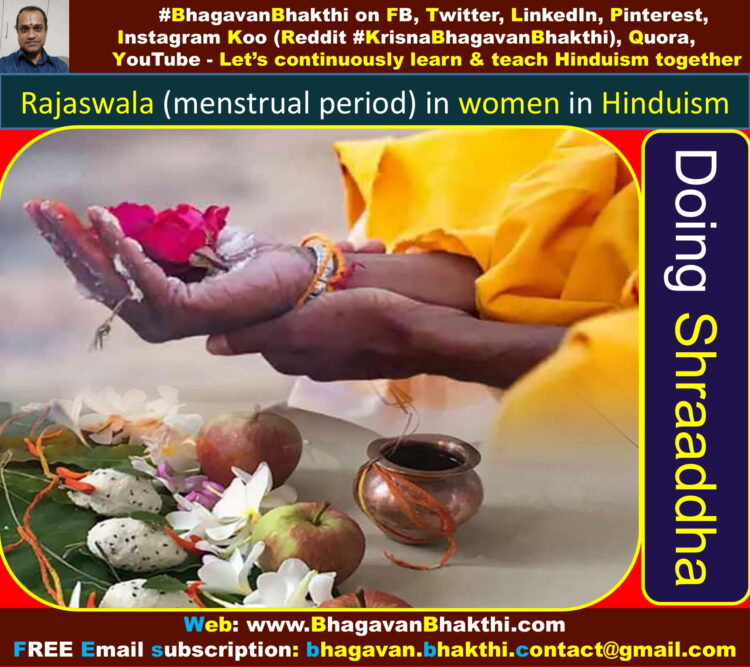 Their conversation was heard by Sumati, their (Dog and Ox) son, who went to some Rishis / sages nearby and asked them to tell what is behind the conversation between the Dog (Jayasri) and the Ox (Sumitra).

For this all the Rishi / sages told to Sumati that, his mother (Dog / Jayasri) had once ignored her rajaswala (menstrual period) and had done all the household works.

Thus, she (Dog – Jayasri) has been born again as Dog in this life.

His (Sumati‘s) father (Ox – Sumitra) even after knowing that, his wife was in rajaswala (menstrual period) had the samparka dosha (Sin of touching her), so he has been born as an Ox.

Thus finally, Sumati asked the Rishi / sages as to what is the remedy to free his parents from this dosha / sin.

All the Rishi / sages suggested that a vrata (vrat) named “Rishi Panchami” pooja / worship has to be performed.

In this pooja / worship if all the Sapta Rishis (Seven Sages) pooja is done in the correct manner, then all the doshas / sins will be purified. 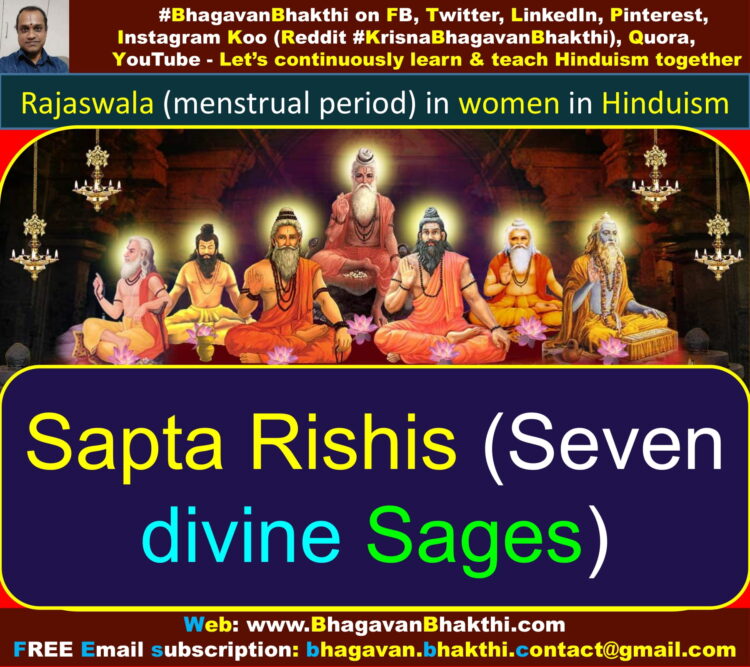 More information will be added to this on regular basis. Please visit after some time for updated information.

To know about ‘About Sapta Rishi and Rishi Panchami’, please click the below link:

What is Rishi Panchami and it’s unknown facts