Namaste friends, how are you doing today? Sri Lakshmi Devi, Sri Saraswati Devi and Sri Parvati Devi blessings to you and your family!

Sanatana Dharma means a Dharma which is eternal and also it is the original name for Hinduism used alongside the more common Hindu Dharma.

For every God starting from Bhagavan Sri Vishnu, Sri Brahma Deva, Sri Rudra Deva (Lord Shiva), etc. all have their consorts since the grand unknown time. No one exactly knows the exact date and time frame of their marriages.

We need to be highly proud to be born in this unique and greatest Dharma called Sanatana Dharma. No other Dharma has privilege of such a long and grand time frame. 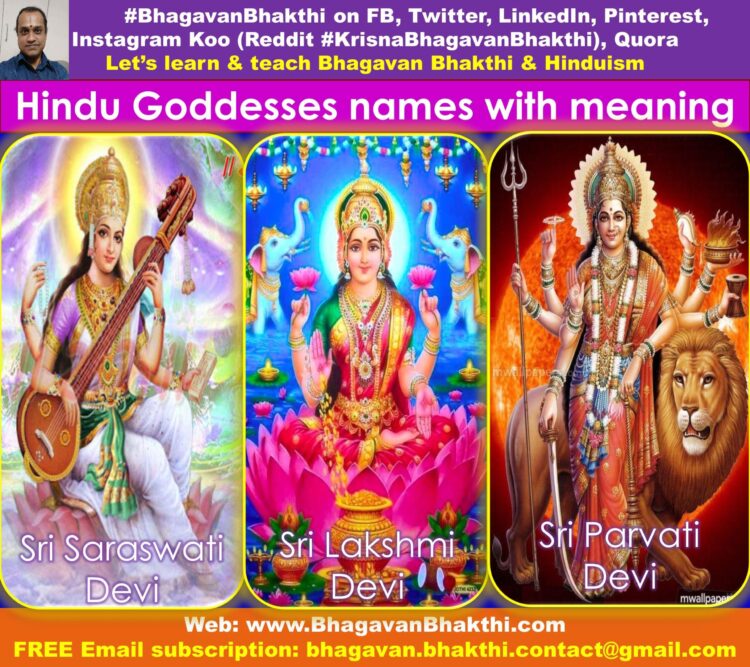 Now, let us know a long list of Hindu Goddesses names with meaning.

Lakshmi : Lakshmi Devi is the consort of Bhagavan Sri Vishnu. She is the goddess of wealth, power, fortune, prosperity, etc. She is the first among the Tridevis (Three Goddesses). Second is Saraswati Devi and third is Parvati Devi. 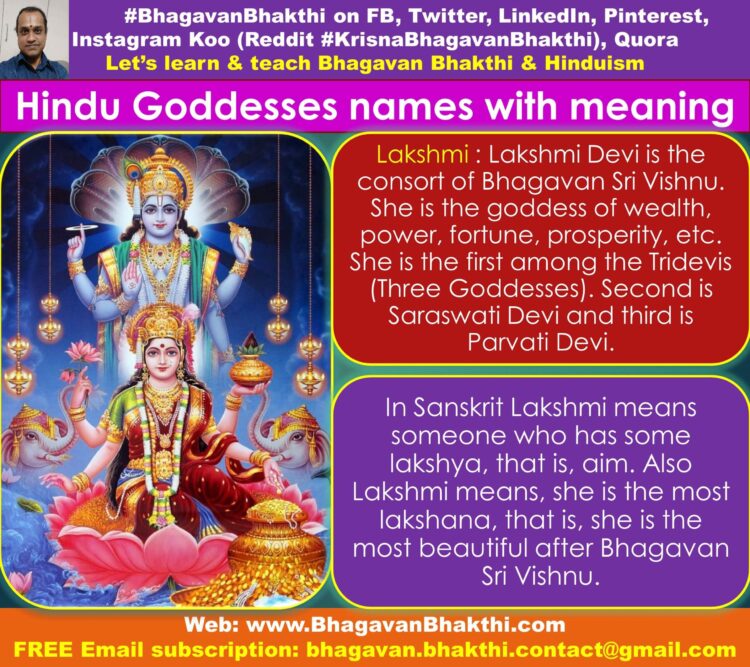 Dhanya Lakshmi : Here Dhanya (Dhaanya) means cereals. She is the main deity from whom we all get all the cereals (food).

Dhairya Lakshmi : Here Dhairya means courage. We all get dhairya (courage) from this form of Lakshmi Devi. 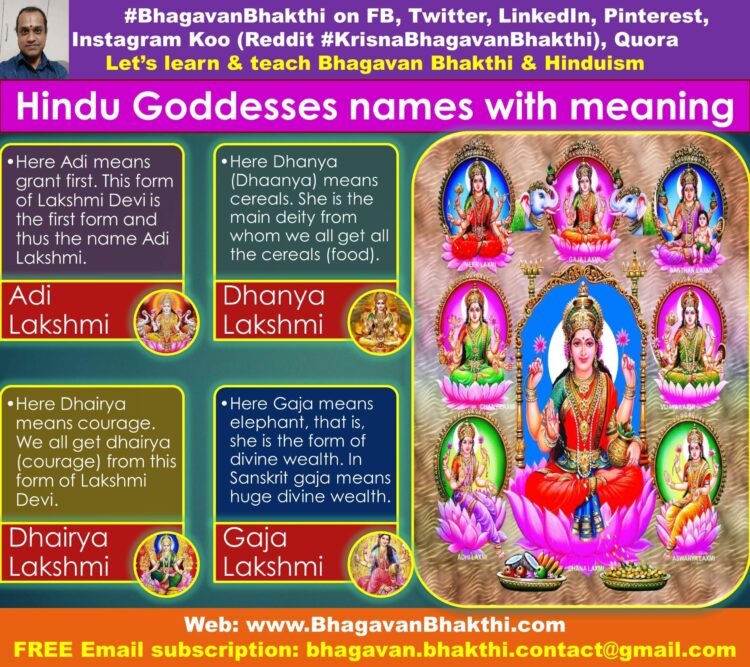 Vijaya Lakshmi : Here Vijaya means victory. Only with her support and blessings, one can achieve the victory. 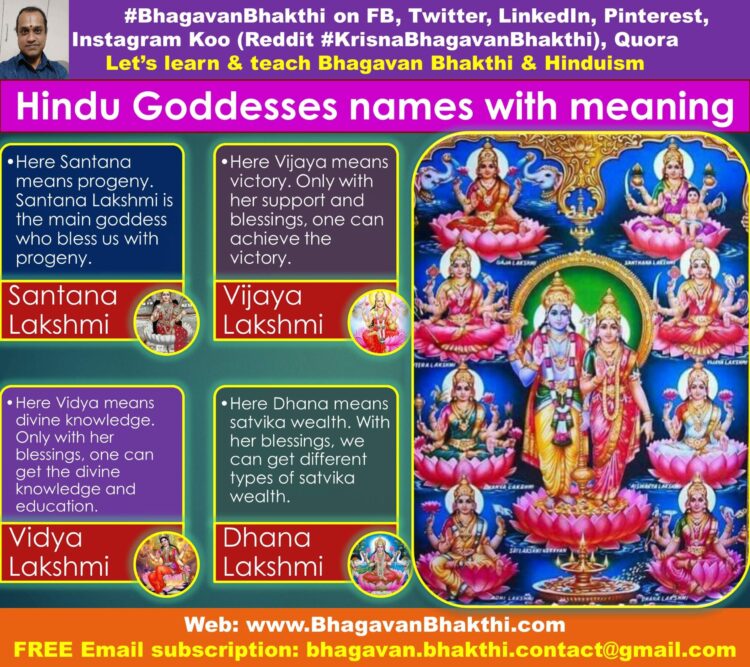 Saraswati : Saraswati Devi is the goddess of learning, education, knowledge, speech, music, art, wisdom etc. Only with her blessings one can achieve anything with respect to education and knowledge.

She is the main controlling deity (abhimani / tattvabhimani devata) of Vedas (education, knowledge, etc.). She is the consort of Sri Brahma Deva.

She is the second most prominent Goddesses among the Tridevis. First been Lakshmi Devi and third is Parvati Devi. She has different names like Sharada, Gayatri, Savitri, etc. 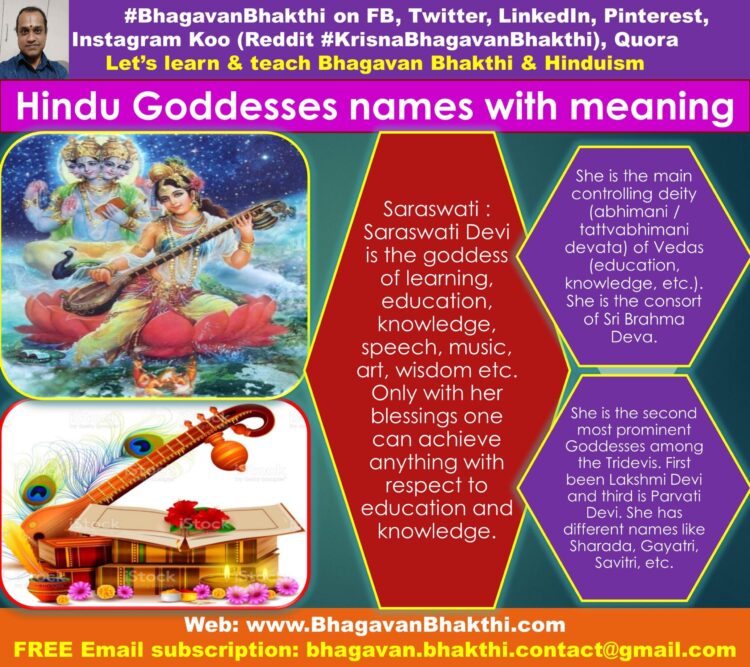 Parvati : Sri Parvati Devi is the daughter of the Parvata Raja and thus the name Parvati. Parvati is the Goddess of love, fertility, marriage, children, beauty, harmony, etc.

She is the mother of Ganesha and Kartikeya. Her consort is Lord Shiva. She is the third most important Goddesses among the Tridevis. First been Sri Lakshmi Devi and second been Sri Saraswati Devi. 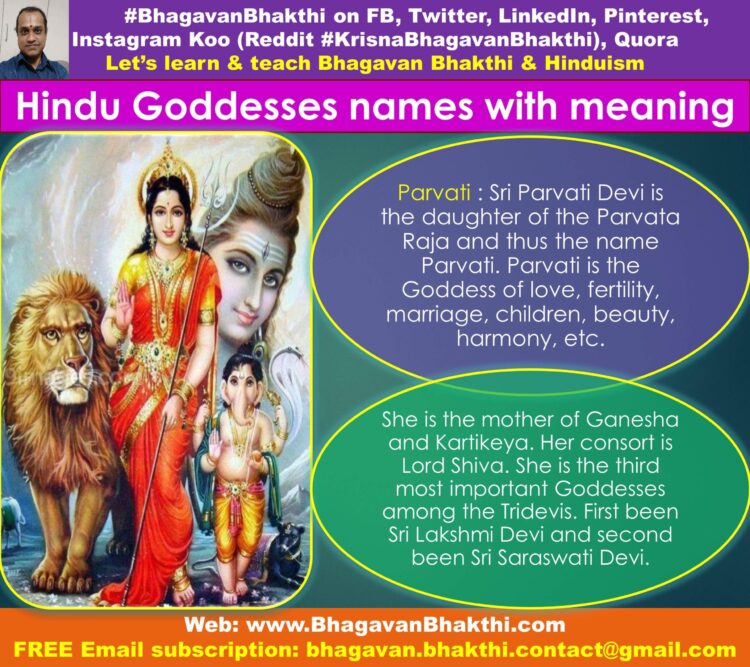 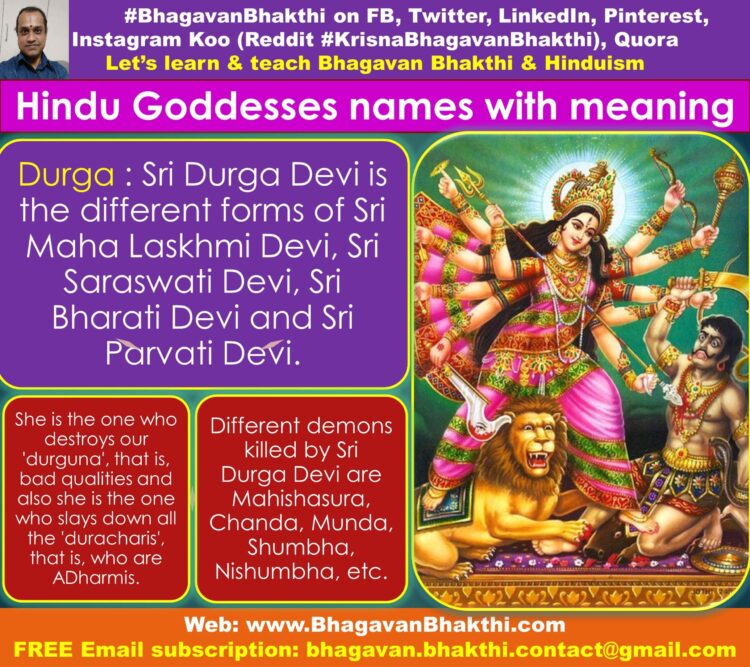 Bhumi : She is mother Earth. She has another name called as Prithvi. Bhumi or Mother Bhumi (Maata Bhumi) is also known as Bhudevi and Vasundhara, is the Goddess representing the Mother Earth.

Bhudevi is the mother of Narakasura and Mangala. Goddess Sita Devi’s mother is Bhudevi. Since Sita Devi is found while furrowing, Sita Devi is considered as the daughter of Bhumi and thus Sita Devi is also called as Bhumija. 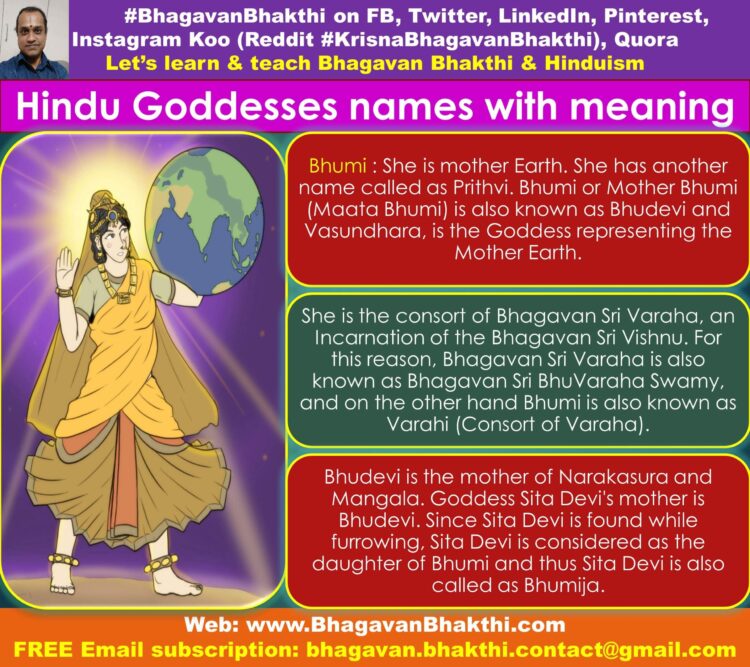 Varuni : She is pronounced as Sri Vaaruni Devi. She is the consort of Sri Aadi Shesha Naga (Bed of Bhagavan Sri Vishnu). 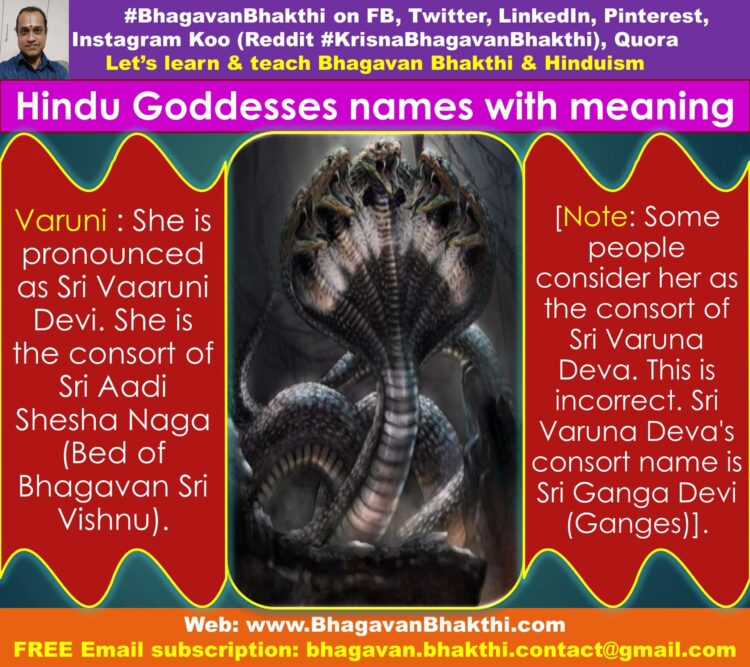 Sauparni : Sri Sauparni Devi is the consort of Sri Garuda Deva. He is the mount (vehicle) of Bhagavan Sri Vishnu. 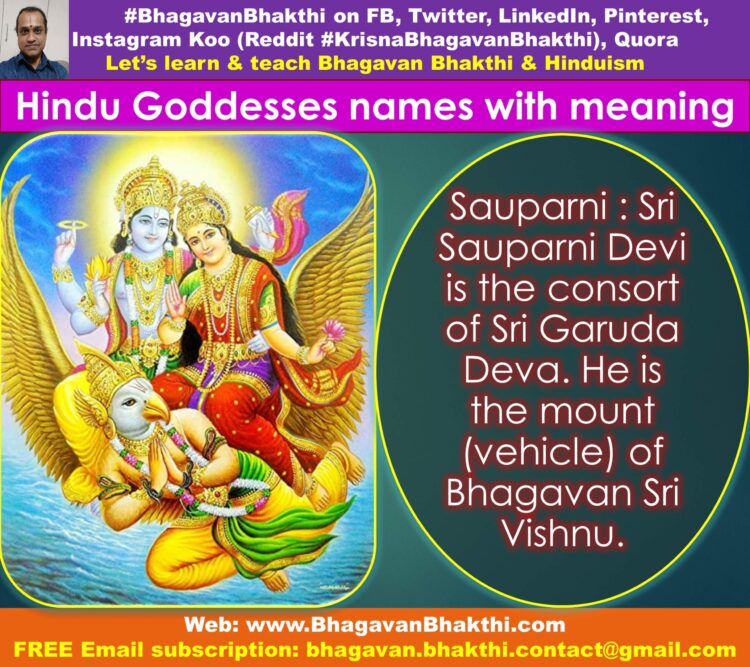 Sachi : Sri Sachi Devi is the consort of Sri Indra Deva. She is the daughter of Puloman (a demon). Her other names are Indrani, Aindri, Poulomi. Her children names are Jayanta, Rishabha, Midhusha, Jayanti, Devasena. 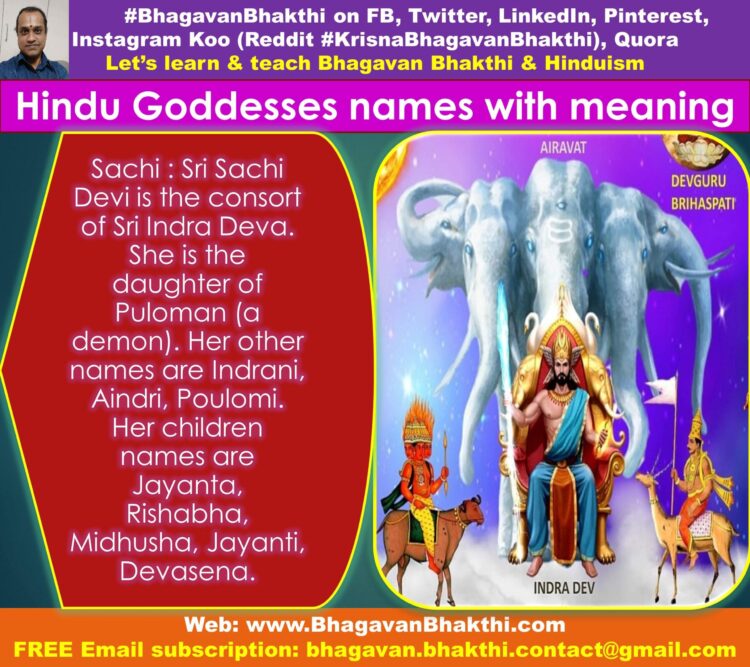 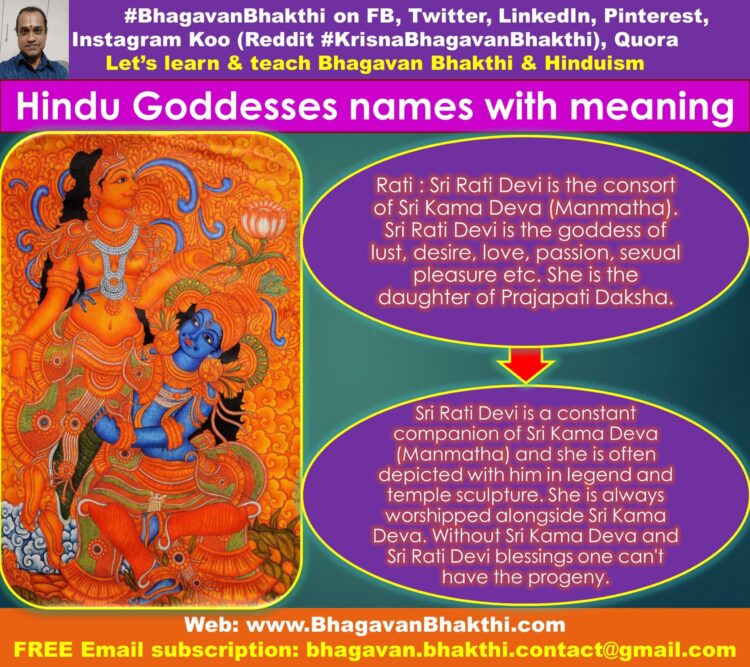 Bhagavan Sri Dhanvantari came holding a ‘Suvarna Kalasha’ (Golden Kalasha / pot) comprising of Amrita from the ocean. At that time ‘ananda ashru’ (Eye drops / आनंद अश्रु) came out of Bhagava Sri Dhanvantari and this drops turned out to be Tulasi Devi.

It was on Kartika month, full moon day Sri Tulasi Devi took birth in the early morning. As soon as she was born, Sri Tulasi Devi went to the mountainous region of Badari to perform tapas / penance.

Though many people tried to persuade her, no one was able to do so, as she was determined to stay and pray in the forest till Bhagavan Sri Krishna appeared and agreed to become her consort.

Rivers names are as given below:

Ganga : “Ganga” is most shreshta / supreme or the best among all the rivers as it has come out of the “paadakamala” (Lotus feet) of Bhagavan Sri Maha Vishnu.

When Sri Trivikrama roopi bhagavan touched the Brahmaanda kavaaTa with his right foot’s angusta / thumb finger, the shuddodaka came out of it and entered “satya loka” of Sri Chatur Mukha Brahma Deva, who stored in his “kamandala” and did prakshalana on himself.

While other rivers flows in bhooloka only, Sri Ganga Devi flows in all the triloka, and removes all sins, so she is the “shreshta nadi” (Best river).

When doing snaana in well, sarovara, pushkarini, and rivers we have to give arGya to Bhagavan Sri Maha Vishnu, Sri Ganga Devi and Sri Surya Deva apart from the respective theerthabhimani devatagan.

But while doing snaana in Sri Ganga Devi river, we must give arGya to Bhagavan Sri Maha Vishnu, Sri Surya Deva, Sri Ganga Devi only and not to other theerthabhimani devatagan.

To know about the Greatness of Sri Ganga Devi, you visit my other post. The link for the same is as given below:

What is the greatness of Ganga

Godavari : Godavari comes next to Ganga in shreshttatva. This is one among the “sapta mahanadi”. Godavari’s birth place is Tryambaka parvata near Nasika.

Krishnaveni : Krishnaveni is the sangama / uniting of “Krishna” and “Veni”. She borns in Sahyaadri.

It is in Bhoovaikunta, that is in Tirupathi, where Bhagavan Sri Maha Vishnu has kept his sannidhana through Sri Varaha Svami and Sri Srinivasa roopas.

There are several theerthaas, one among them is Swami Pushkarni Tirtha – where it is said that

While doing snaana in Swamipushkarini, we must have the dhyana as “Bhagavan Sri Maha Vishnu will be standing with Sridevi-Bhoodevi, holding his Shanka, Chakra, and varadamudra.

Chandra Pushkarini : It is a sarovara, which can be found in the fifth praakaara among sapta praakaraas at Sri Ranga.

Manasa sarovara : This is in Himalaya mountain range, which has the special saannidhya of many Devatagan. Kaveri and Saraswathi – Both these rivers are in the same kakshya.

Kaveri : It takes its birth in Bhagamandala Talakaveri. She was earlier Agastya Maharshi’s wife Lopamudra and now born as daughter of “Kavera” Rushi – that is “Kaveri”.

In Sri Rangam, Kaveri flows in two directions. We can find Kaveri in all the Ranga kshetraas viz., Aadiranga – Srirangapatna, Madhyaranga – Shivanasamudra and Antyaranga – Sri Ranga.

In all these places Bhagavan Sri Maha Vishnu is in the roopa of Ranganatha Svami itself.

Saraswati (river) : It flows from Himalaya near Shamyapraasa, where there is Vyasashrama in Badari.

In “Prayaga” Sarasvati flows as Guptagamini, along with Ganga and Yamuna – so it is called as Triveni sangama (uniting of the three rivers).

Sarayu : This flows in Ayodhya, that is in Sri Rama janma bhoomi. This is in the kakshya next to Kaveri and Saraswati.

Tungabhadra : “Tungabhadra” and “Sarayoo” both are in the same kakshya.

Tunga & Bhadra are born from the teeth of “Sri Varaha Svami” and joins in Koodli near Shivamogga and flows in Honnali, Mantralaya, etc.

There is a saying “gangaa snaanam tungaa paanam”, meaning the Tunga river is very very tasty.

Yamuna or Kalindi : Yamuna river comes next to Tungabhadra. She is the daughter of Sri Surya Deva from Sanjya Devi and the sister of Sri Yama Deva.

This is also one among the sapta mahanadees.

Yamunotri is the janma staana of this river.

As this river flows in Kalinda parvata ranges, it is called as “Kalindi” and Bhagavan Sri Krishna did the Kalinga mardhana in this river itself.

Narmada – Sindu : Next to Yamuna in taratamya – comes Narmada which takes birth in Vindyaparvata and Sindhu River.

To know the greatness of Narmada river, you can visit this link:

What is the greatness of river Narmada

Bhavanaashini : It flows in Ahobila which is the capital of Hiranyakashipu and it is Nava Naarasimha kshetra.

Tamraparni : This flows in Tirunelveli in Tamilnadu.

Pinakini : This flows as two channels that is, Dakshina Pinakini and Uttara Pinakini, which is said to be the birth place of Trivikrama.

Next – Sagaragami Rivers : which flows independently and are equal to Bheemarati and joins the Sea.

Next – All other rivers

Next – Pushkarini : Which are usually found in the Eshaanya direction of the devastaanas.

Next – Tataakaas : Which flows in villages, forests and mountain ranges in half chandrakruti.

Next – Koopaas (wells) : Which is about 5 Feet width, created by digging earth and covered with Cement blocks (कुंआ).

Annapoorna : She is an avatar / form of Goddess Sri Parvati Devi. She is the Goddess of food. Here Annapoorna means, someone who feeds food full stomach. Anna + Poorna = Food + Full stomach.

Finally after a lots of efforts by Lord Shiva, Sri Annapoorna Devi puts the food into the ‘kapala’ and thus Lord Shiva becomes free of curse of Sri Brahma Deva.

Different names of Sri Annapoorna Devi are as given below:

d. Sṛṣtihetukāvaradānī (सृष्टिहेतुकावरदानी) – She is the someone who is a boon granter for the sake of the world.

To know the full story of “What is Lord Brahma Deva fifth face real story”, click the below link:

Later Daksha Prajapati due to his ego and arrogance, humiliates Lord Shiva. This was not tolerated by Sri Sati Devi and thus she enters into fire and sacrifices her life. Later she was again born as Parvati Devi as the daughter of Parvata Raja.

Shashti (Devasena) : She is the consort of Lord Kartikeya and she is the Goddess of children and reproduction. She is the daughter of Lord Indra Deva and Sachi Devi.

Svaha : She is the Goddess of ash and marriage, daughter of Daksha Prajapati and consort of Sri Agni Deva. In Sanskrit Svaha means invocation offering.

Dakshina : She is the Goddess of yagna and was born from the hair follicles of Radha Devi and also reborn from Goddess Sri Lakshmi Devi. She is the consort of Lord Yagna.

To know more about Hindu Gods unknown facts, visit the below link: