Karna can be called as an unfortunate hero of the Mahabharata and definitely Duryodhana is the biggest sinner.

Because avatar is used for great souls. Duryodhana is the most vile kind of person and thus he can’t be called as an avatar. 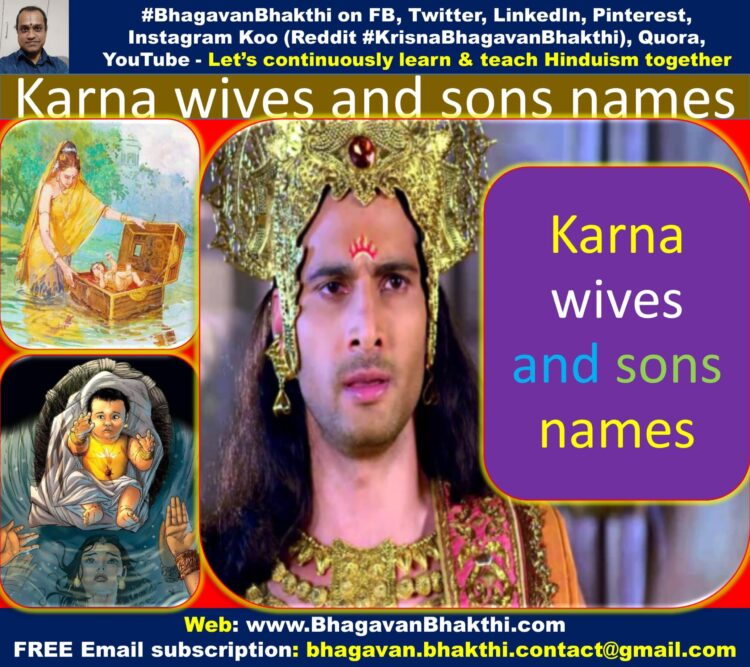 Both Karna and Duryodhana had ample amount of opportunities to be good, but Duryodhana refused all of them completely and since Karna was a friend to Duryodhana, he too did the same.

Karna and Duryodhana got fruits as per their Karmas. They, both ended up losing their kith and kin too. 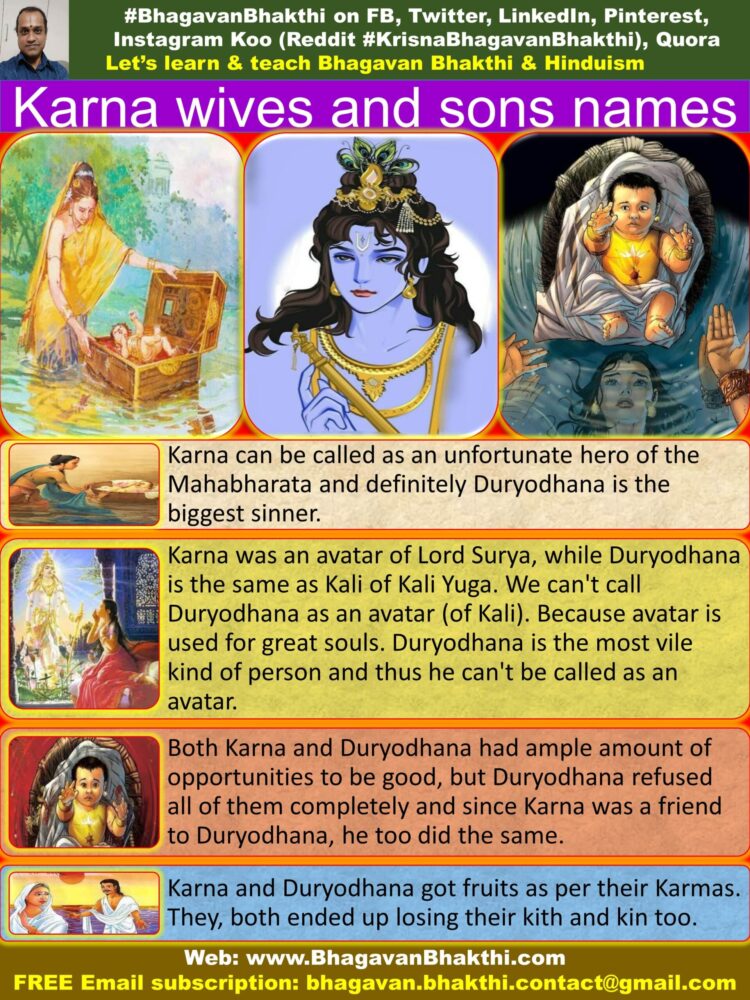 Now, let us know about the wives and sons of Karna. Karna had 9 sons.

List of Karna sons names are as given below: 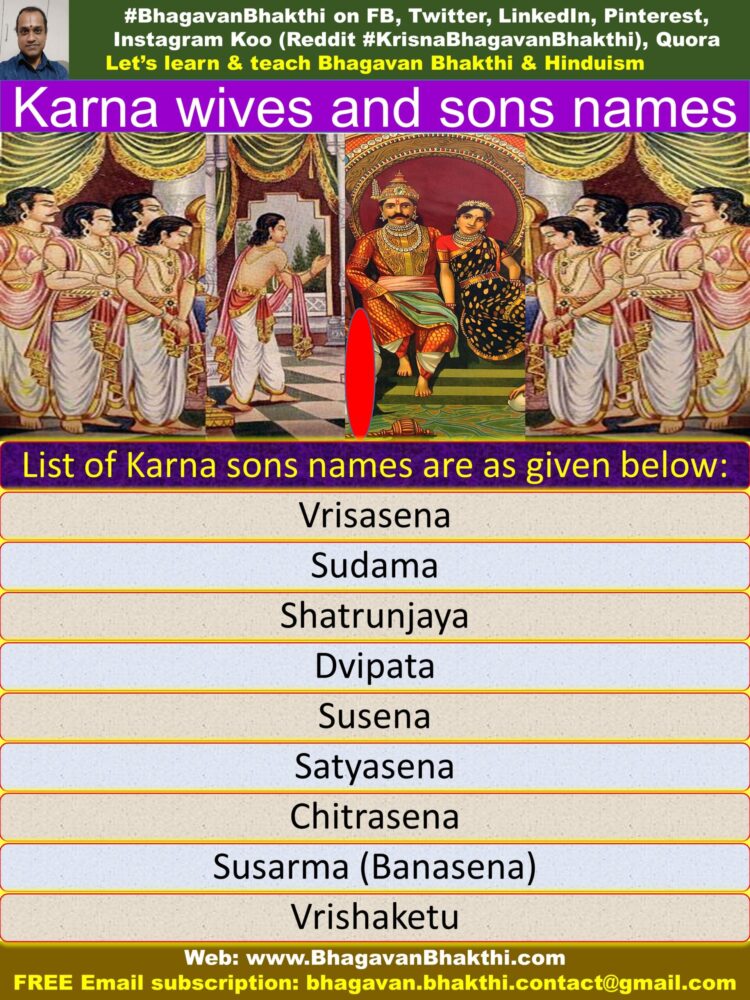 Of the above 9 sons, eight (8) died and only one survived. Ironically and to our belief this one son became an ally of the great Arjuna (Pandavas).

Names of Karna wives are as given below:

Second wife name is unknown (Name not revealed in Mahabharata)

[As given above, Karna had two wives. His first wife name was Vrishali. Vrishali was a daughter of a sarathi (charioteer).]

[He also married a friend of Duryodhana’s wife Bhanumati. This second wife name is unrevealed in Mahabharata.]

[Some say her name as Supriya, but this name is not at all revealed in Mahabharata.] 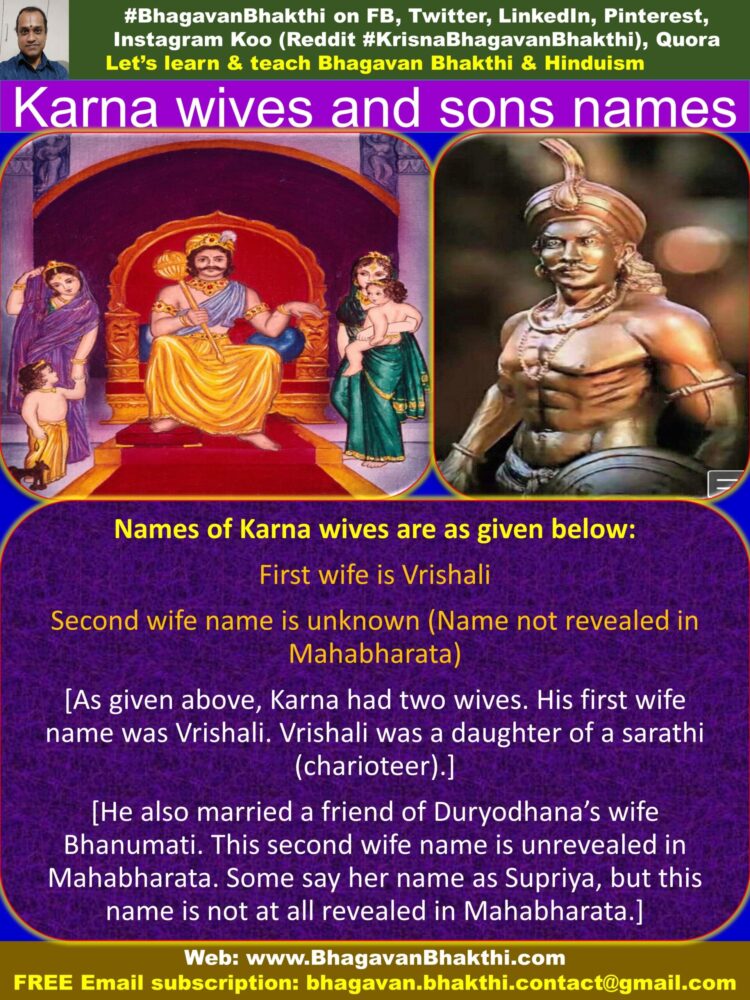 [Duryodhana and Bhanumati had one son called Lakshman and one daughter known as Lakshmana. The daughter was kidnapped by Samba.

[Since Rohini was a daughter of the Jambavan, she is called as Jambavati. Jambavan was an avatar of Lord Yama Deva.] 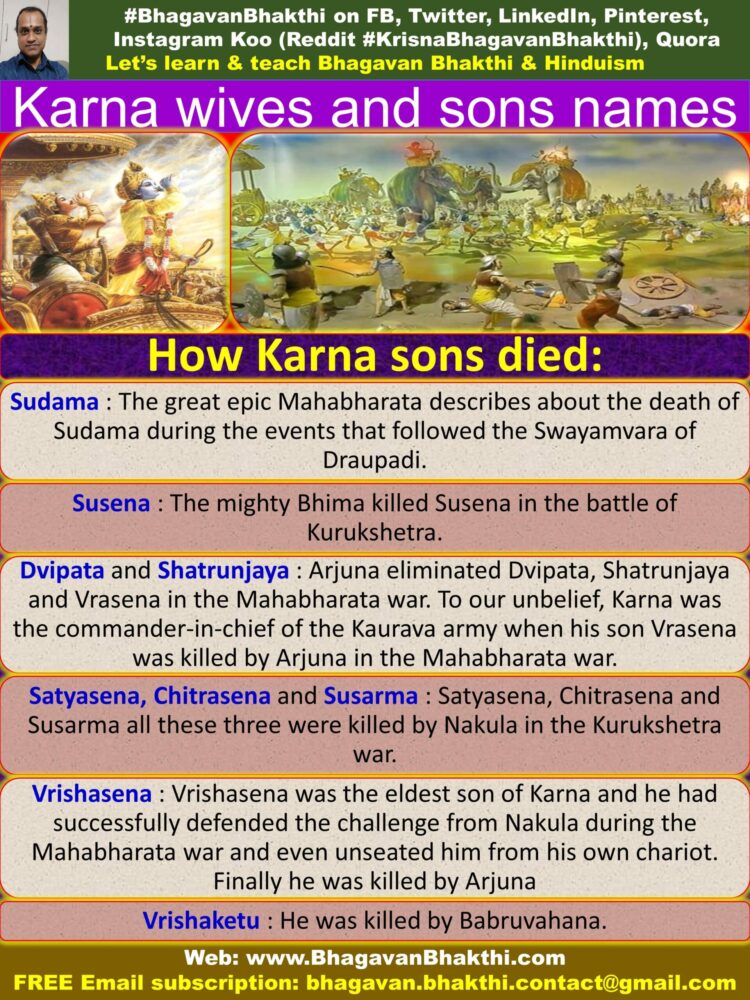 How Karna sons died is as given below:

Susena : The mighty Bhima killed Susena in the battle of Kurukshetra.

To our unbelief, Karna was the commander-in-chief of the Kaurava army when his sons Dvipata and Shatrunjaya were killed by Arjuna in the Mahabharata war.

Vrishasena : Vrishasena was the eldest son of Karna and he had successfully defended the challenge from Nakula during the Mahabharata war and even unseated him from his own chariot.

Nakula then mounted the chariot of Bhima. When Nakula saw Arjuna nearby, Nakula called out for help and urged Arjuna to kill Vrishasena.

Thus, Arjuna then requests Lord Krishna who was his charioteer to go towards Vrishasena. “I will slay Vrishasena in front of his father’s eyes”, Arjuna said.

Vrishasena was unmoved by Arjuna’s great capability as the foremost archer of the Mahabharata time. Vrishasena showers Arjuna with so many arrows that, ten of them pierced Arjuna’s arms.

While, ten arrows pierce Lord Krishna on his arms too, Arjuna was completely enraged. No Pandava could accept this type of cause to Lord Krishna.

Thus, the great archer Arjuna calls out to all the Kauravas, which included Karna, that he will kill Vrishasena now itself.

Arjuna, now then turns towards Karna and exclaims in anger, “You killed my son Abhimanyu in an unfair warfare. Today, I will kill your son Vrishasena now itself”.

The mighty Arjuna then proceeds to show why he is regarded as the greatest archer of all times.

Arjuna shoots ten arrows at Vrishasena weakening him even as his father Karna becomes just a spectator and was not at all was able to help his own son Vrishasena.

The third Pandava, that is, Arjuna fires four razor sharp headed arrows towards Vrishasena. This will cut off Vrishasena’s bow, his two arms and then finally his head too.

Karna just becomes a viewer and without any help, cries aloud when he sees the head of his son severed from his body.

Karna curses Arjuna and challenged him to a battle.

Vrishaketu : The only son to survive the Mahabharata war was Vrishaketu. After the war, the mighty Pandavas took him under their care.

This same son Vrishaketu accompanied Arjuna in his military warfronts against Sudhava and Babruvahana.

(Babruvahana was the son of Arjuna from his wife Chitrangada from a place called Manipura. Babruvahana was an avatar of Jayanta, that is, Lord Indra’s son.)

Again, this same son Vrishaketu also participated in the Ashwamedha Yagna conducted by the great Pandavas after the war of Kurukshetra.

Mahabharata says that, Karna’s son Vrishaketu is believed to be the last mortal human on the earth to understand and to know the use of Brahmastra, Varunastra, Agneyastra and Vayuastra.

This divine knowledge completely ended with Vrishaketu as Lord Krishna had ordered him not to reveal it to any person.

Vrishaketu was killed by Babruvahana in the war between Arjuna and Babruvahana. 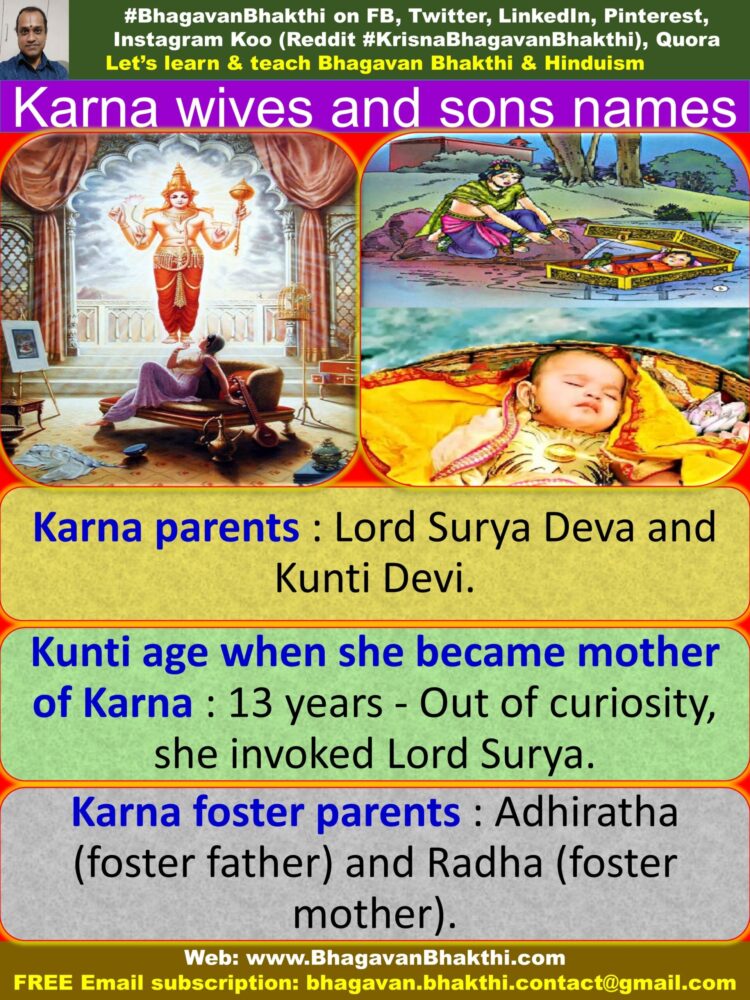 Kunti age when she became mother of Karna : 13 years – Out of curiosity, she invoked Lord Surya.

To know about “how Kunti became mother of Karna”, click the below link:

How Kunti became mother of Karna