Just before going to know about “What is Vaikuntha Ekadashi (Mukkoti Ekadashi) (Vaikuntha North door Darshanam)”, let us have a brief about Ekadashi.

Ekadashi in Sanskrit means the 11th lunar day (tithi) in Hindu calendar (Panchang) that occurs twice in a lunar month both in Shukla paksha (bright fortnight) as well as in Krishna paksha (dark fortnight).

This means, we normally get two Ekadashi days in a lunar month (Chandraman Panchang) and thus, in a year there will be 24 Ekadashi days.

Whereas, sometimes even more Ekadashis days are found, that is because whenever there is Adhika masam (Extra month) as per lunar calendar (Chandraman Panchang / Chandramana Panchanga). 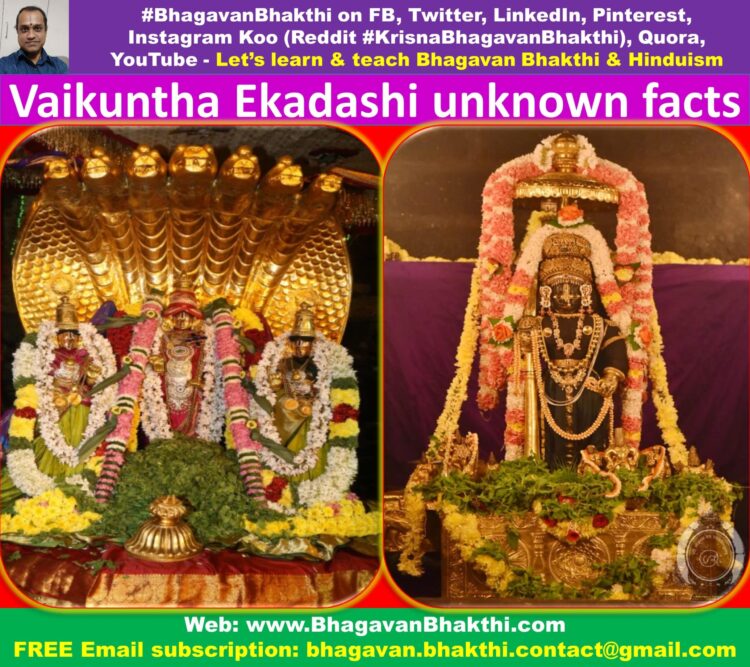 List of Vaikuntha Ekadashi unknown facts are as given below:

Ekadashi is the most favourite day of Lord Vishnu

Ekadashi day has given the highest prominence in Hinduism

No austerity is equal to Ekadashi vrat (vrata)

Ekadashi is considered as the female energy of Lord Vishnu

During Vaikuntha Ekadashi, Vaikuntha’s northern doors will be opened

Nirjala upavasam should be done on Vaikuntha Ekadashi

Lord Vishnu different names has to be chanted on Vaikuntha Ekadashi

Lord Vishnu temples should be visited on Vaikuntha Ekadashi

And many many more… 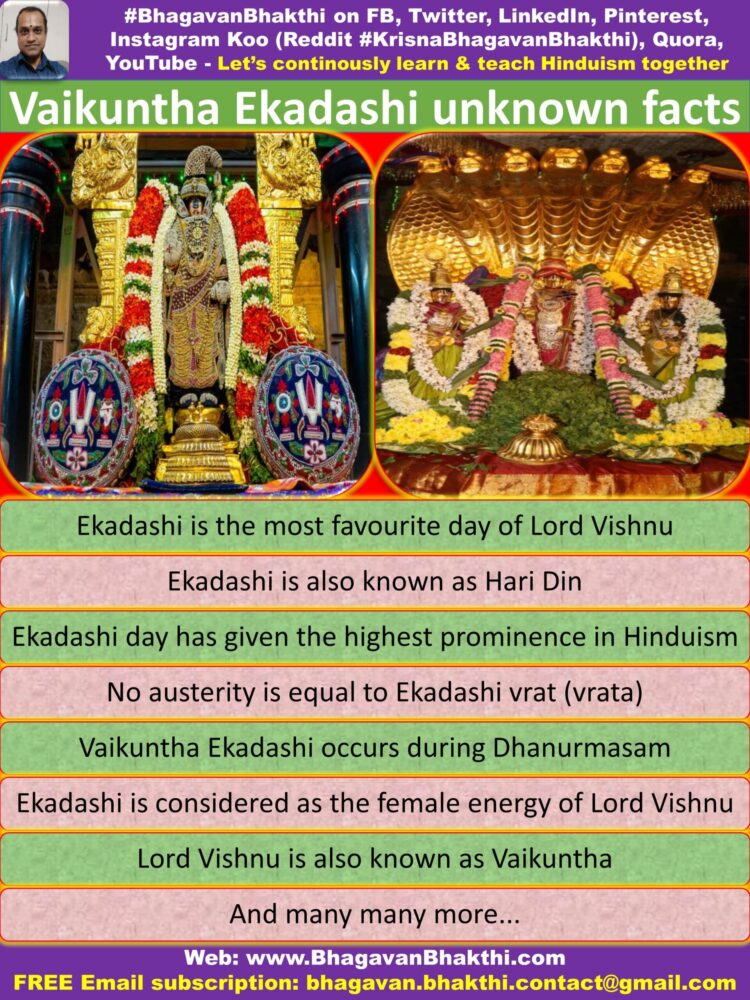 Ekadashi is the most favourite day of Lord Vishnu and that’s why it is also known as Hari Din, that is, this day is dedicated to only Lord Sri Vishnu / Krishna / Rama / Hari.

In Hinduism, Ekadashi day has given the highest prominence, as it is the most sacred and holiest day prescribed for worshiping the Supreme Lord Vishnu.

We can easily find devotee of Lord Vishnu observe fasting on all the Ekadashi and spend the whole day in spiritual (adyatmik) pursuits.

In Hindu scriptures, it is said that there is no austerity that is equivalent to Ekadashi Vrat (Vrata / divine Hindu austerity) in terms of merits.

Most of the Puranas and including the great Padma Purana has eulogized the great importance and merits of Ekadashi Vrat (Vrata / divine Hindu austerity).

It is said that in our Puranas that : 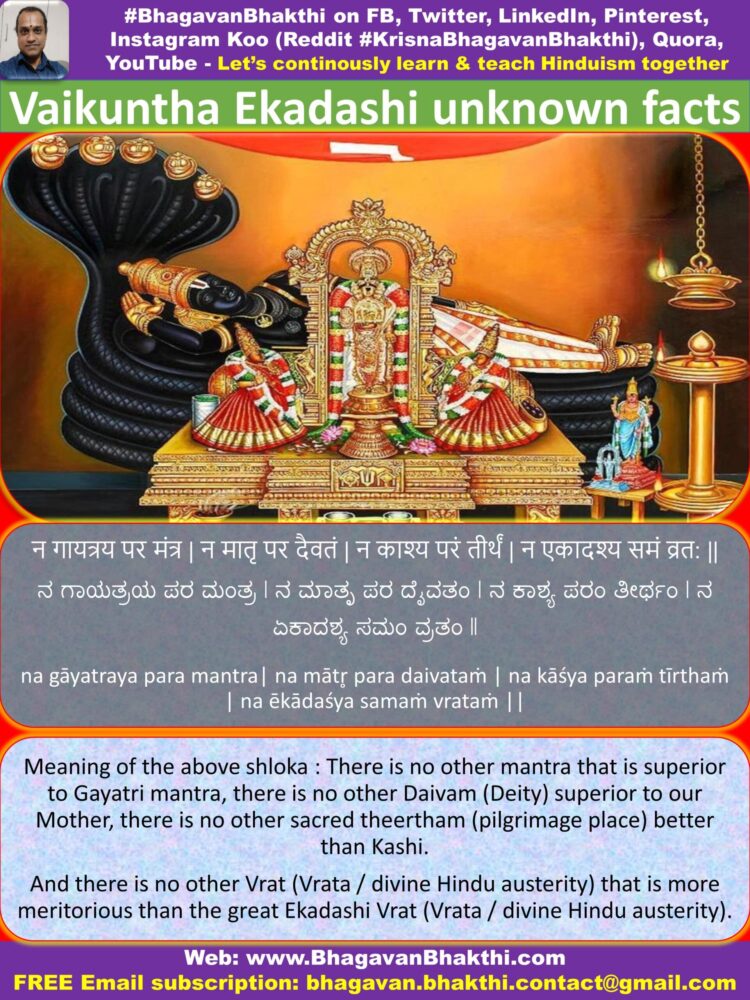 What is Vaikuntha Ekadashi day

Ekadashi that occurs in shukla paksha (bright fortnight) of the lunar Month either in Margashira masam (month) or Pushya masam (month) coinciding with holy solar month of Dhanur masam (month) is estimated as the great Vaikuntha Ekadashi day.

Though all Ekadashi days are equal in merits, whereas the great Vaikuntha Ekadashi has attained lot of importance in terms of spirituality as it occurs during Dhanurmasam, that is, before the onset of Uttarayan (Uttarayana).

If the same day occurs in Margashira masam (month), it is also known as Mokshada Ekadashi, that is, this day is capable of bestowing salvation to Lord Vishnu devotees.

And whereas, if this great day of Vaikuntha Ekadashi occurs in Pushya masam (month) it is also called as Putrada Ekadashi, that is, this day is capable of bestowing progeny to the couple who are devotees of Lord Vishnu.

As per the great Padma Purana, Ekadashi is considered as the female energy of Lord Vishnu, that is, Lord Vishnu himself another form of damsel manifested on this day and killed the demon known as Mura and also protected the Lord Indra and other Devatas (Demigods).

Thus, pleased by the act of His own female energy, Lord Vishnu named her as Ekadashi. 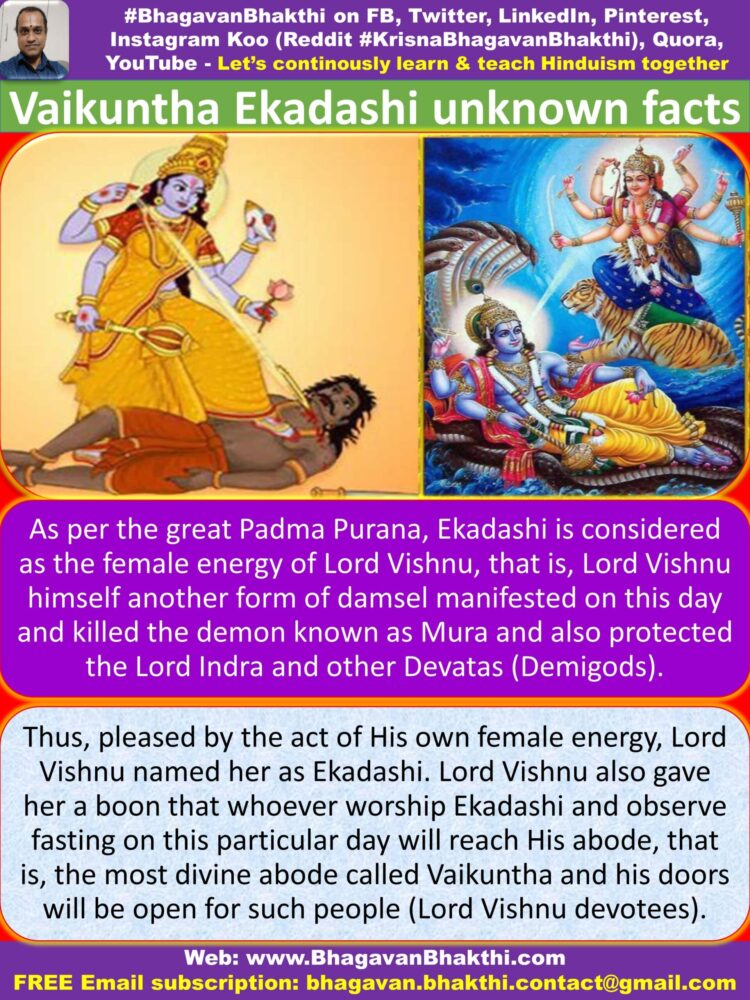 Lord Vishnu also gave her a boon that whoever worship Ekadashi and observe fasting on this particular day will reach His abode, that is, the most divine abode called Vaikuntha and his doors will be open for such people (Lord Vishnu devotees).

This divine abode name called Vaikuntha is one of the unlimited of Lord Vishnu.

Vaikuntha is the most divine place where Lord Vishnu is staying physically along with Goddess Sri Maha Lakshmi Devi since the unknown time.

This is the most divine place where Lord Vishnu resides along with his consort Goddess Sri Maha Lakshmi Devi in the resting position on Aadi Shesha Naag (Naaga). For this reason, Lord Vishnu is also called as Shesha Shayi or Shesha Shayana.

This means, Lord Vishnu will be always in the resting position on this great and divine serpent Lord Aadi Shesha Naag (Naaga).

This divine place of Vaikuntha is also called as ‘Paramapadam’, (most divine place or the supreme abode) and thus this place is the most coveted place of Lord Vishnu.

Since Vaikuntha is the most divine abode of Lord Vishnu, he is also called as ‘Vaikunthadhisha’, ‘Vaikunthavaasi’, etc.

Vaikuntha is the most sacred abode where every atma (soul) / devotee of Lord Vishnu will be longing to go and stay eternally. 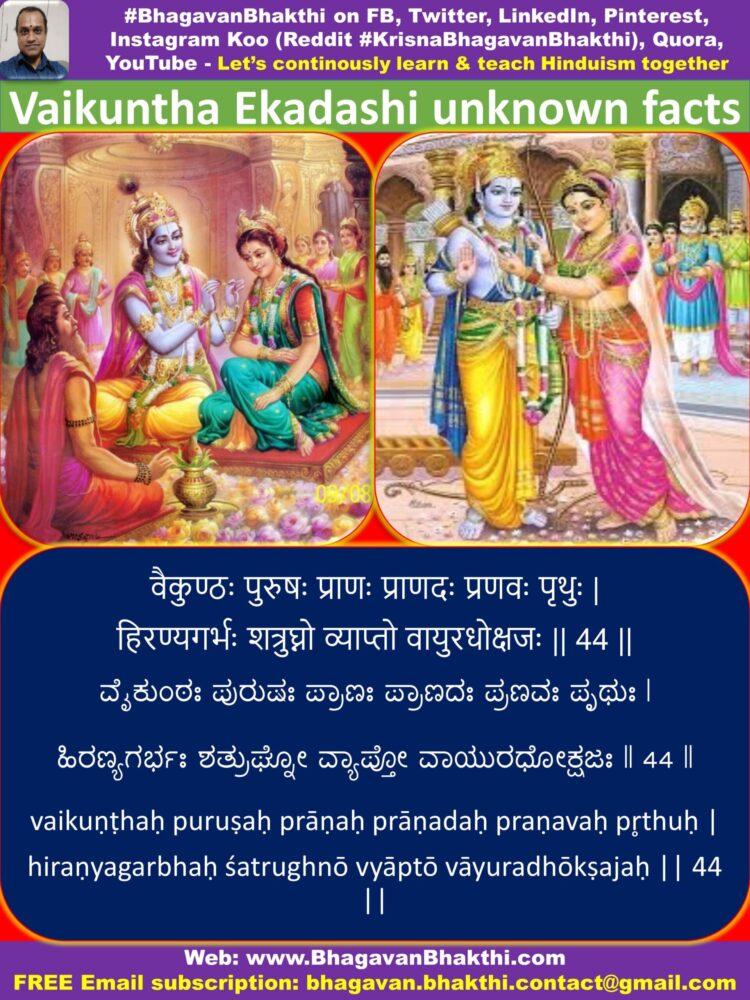 The word Vaikuntha can be found in ‘Sri Vishnu Sahasranama Stotram’ shloka no. 44 as given below :

Meaning of the above shloka : Lord Vishnu also known as Vaikuntha and he the remover of all the obstacles and sins. And also, the most divine abode of Vaikuntha is the place which removes obstacles.

Lord Vishnu is the one who has united all the Pancha Bhootas and made them to co-exist with each other. He is the Purifier and the one who gives in plenty to all his devotees.

Lord Vishnu is the primordial Supreme Personality who existed before anything else, and the one who is the main cause of the origin and end of the unlimited universes.

Lord Vishnu is the one who outshines everyone and everything. He burns away all the sins of his devotees.

Lord Vishnu is life giver and is the vital air that gives or sustains life. He is the Prana (life) to everyone including Devatas.

Lord Vishnu is the one who manifests himself as per his own wishes, never gets diminishes and is the all pervasive Supreme God none-other than Bhagavan Srimanm Narayana. 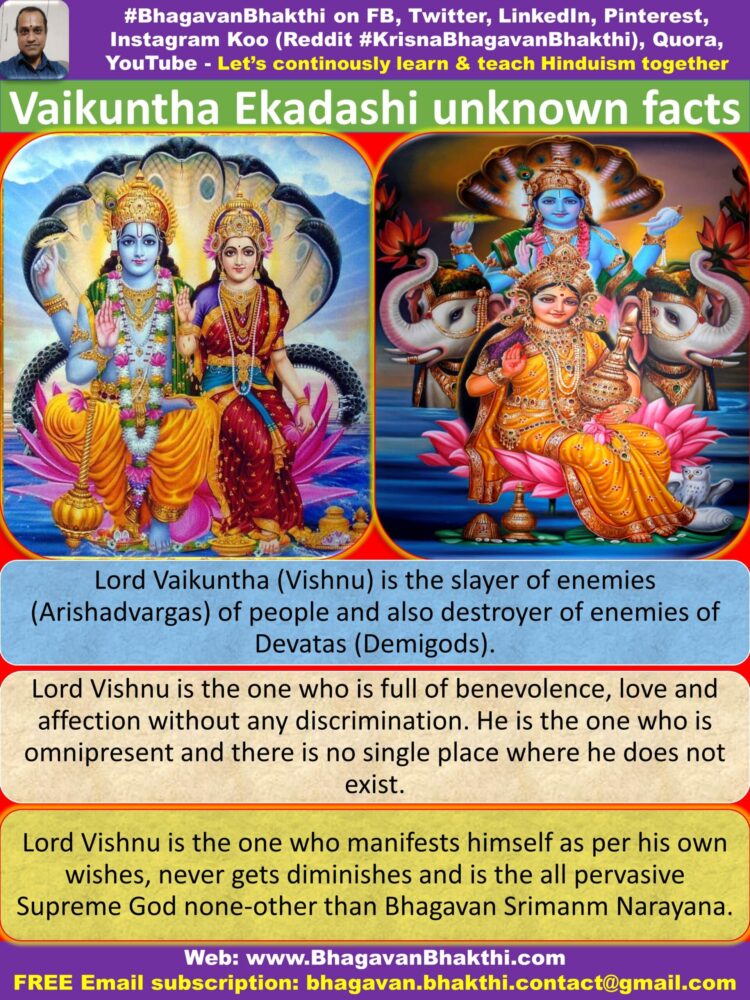 Mukkoti literally means three crores. It is believed that on this auspicious day of Vaikuntha Ekadashi, Lord Brahma Deva along with the other Devatas (Demi Gods – 3 crores Devatas) will have darshanam of the Lord Vishnu at His abode of Vaikuntha during Arunodaya kalam.

Also, there is a spiritual and yogic (Kundalini) importance for Mukkoti Ekadashi. This is similarly to geographical directions (i.e., North, South, East, & West) to the world, we also have similar directions to our body.

On top of the head (skull) we have a hole called Brahma Randra (Sahasra Chakra) towards the Northern Direction which is not visible. Thus, since it is in the northern direction it is called Northern gate of the human body.

In Hindu scriptures, it is said that one should visualize the image of Lord Vishnu through the route of Ida, Pingala Nadi (Naadi), which run through left and right nostrils and Sushumna Nadi (Naadi) which runs through center of the nose, concentrating at midpoint of the eyebrows called Jnana Netra where Aajna chakra is located. 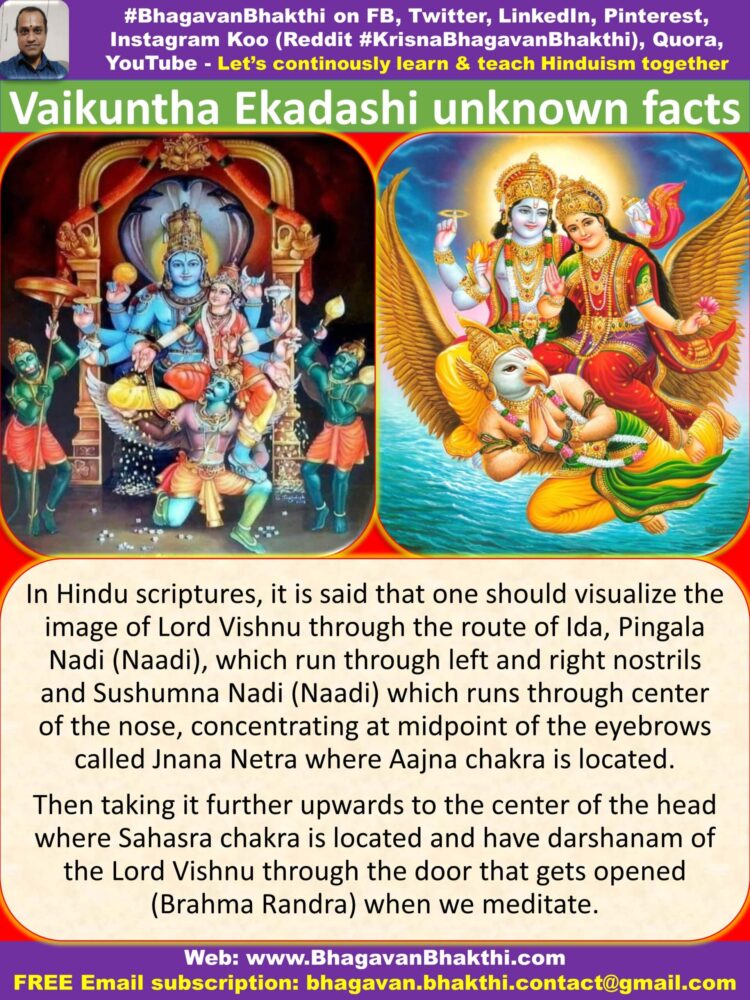 Then taking it further upwards to the center of the head where Sahasra chakra is located and have darshanam of the Lord Vishnu through the door that gets opened (Brahma Randra) when we meditate.

This is how one should visualize Lord Vishnu even during our daily prayers or whenever one visits a temple.

Since it is through the route of the confluence of three nadis (naadis) (Ida, Pingala and Sushumna) taken further north towards the Sahasra Chakra it is called Mukkoti.

Koti also means an angle, a knot, an edge and Mu means tying or binding.

Having darshanam of the Lord Vishnu from an angle where the three Nadis (Naadis) meet is spiritually known as Uttara dwara darshanam and the day is known as Mukkoti Ekadashi.

As per Hindu Puranas, there are fourteen (14) lokas or worlds in this Universe. That is, 7 are above (including Earth) and 7 are below earth.

Darshanam of the Lord of Vaikuntha (in northern direction) Lord Vishnu on this day which is nearer to Uttarayana the most auspicious time also catches significance for Uttara dwara darshanam. 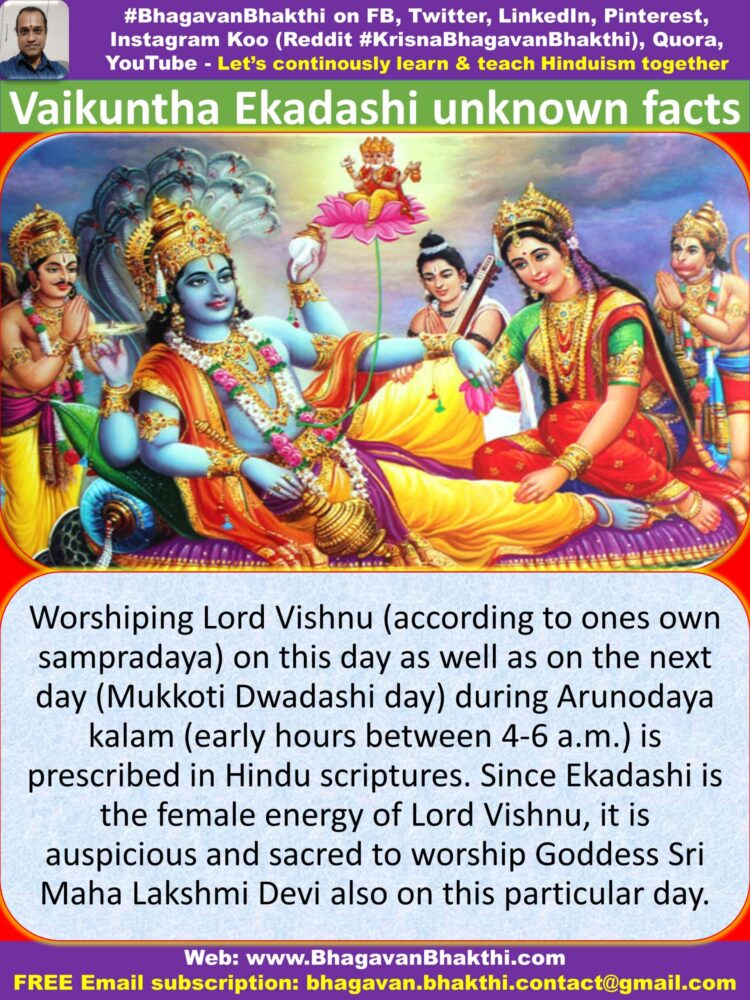 What should be done on Vaikuntha Ekadashi day

Worshiping Lord Vishnu (according to ones own sampradaya) on this day as well as on the next day (Mukkoti Dwadashi day) during Arunodaya kalam (early hours between 4-6 a.m.) is prescribed in Hindu scriptures.

Since Ekadashi is the female energy of Lord Vishnu, it is auspicious and sacred to worship Goddess Sri Maha Lakshmi Devi also on this particular day.

Complete fasting called as nirjala upavasam is prescribed on all the Ekadashi day and more so in the Vaikuntha Ekadashi also one has to fast without even having a drop of water.

One can undertake fasting according to one’s physical fitness, that is, depending on the age, is any diseases etc are present, only then one can take little fruits or milk. Otherwise one has to do complete ‘nirjala upavasam’ (Without even a drop of water).

One should avoid taking rice and all types of grains on this day. Fasting becomes futile if it is not accompanied by sincere prayer and meditation. 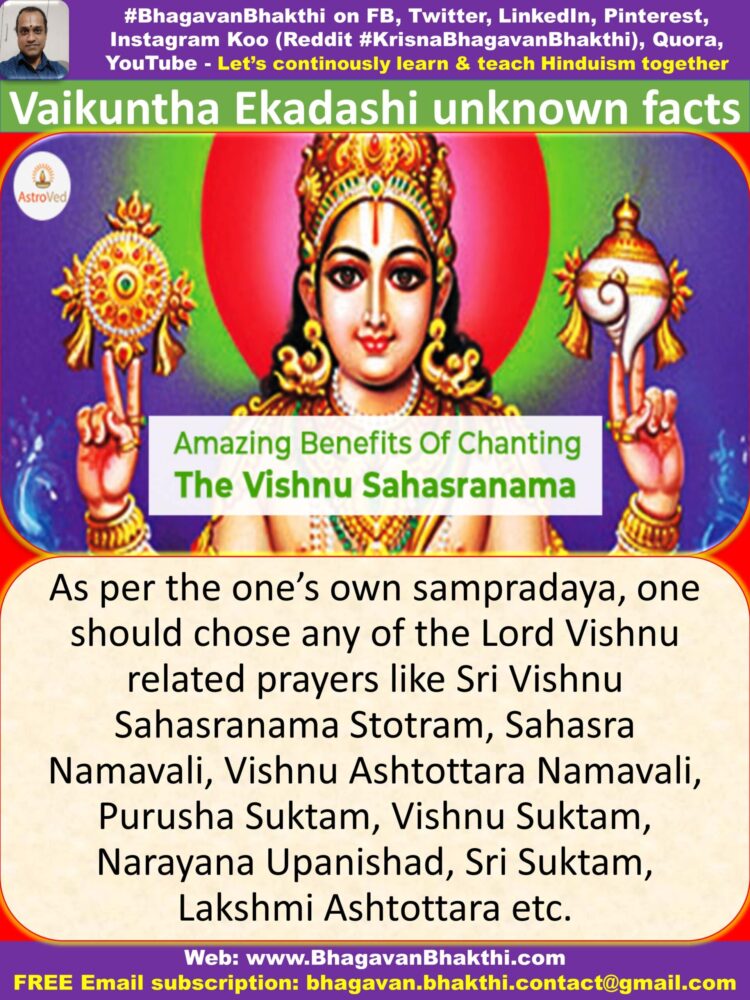 Vaikunthat Ekadashi is considered to be the most divine and auspicious day to worship Lord Vishnu or Narayana or Krishna or Rama along with Goddess Sri Maha Lakshmi Devi and to have Uttara Dwara darshanam (both physically and spiritually).

Special celebrations are held on this occasion at all Lord Vishnu related temples especially at Tirupati (Tirumalai), Dwaraka, Mathura, Udupi, Sri Rangam, Puri Jagannath, Bhadrachalam etc. where thousands and lakhs of Lord Vishnu devotees will gather to have the Uttara Dwara darshanam of the Lord Vishnu / Krishna / Rama / Srinivasa.

Along with these, Srimad Bhagavatam (Vishnu), Ramayana, Mahabharata, etc. has to be read, heard and the Pandits should preach the same to the ordinary humans.

Let us all pray to Lord Vishnu to save us from all the evils inside and outside of us and show us the path to Vaikuntha. Lord Vishnu is the most karunanidhi (kindest) and he will definitely save all his devotees.

To know more about Lord Vishnu, visit the below link:

To watch the “What are Vaikuntha Ekadashi unknown facts“, visit the below given YouTube channel video link: