What all things came out of samudra manthan

The real legend and classic समुद्र मंथन / ಸಮುದ್ರ ಮಂಥನ / samudra manthana (Samudra Manthana / Churning of ocean) is one of the popular phenomenon in Hinduism (Sanatana Dharma).

This has been very clearly explained in Hindu Shastras (Hindu divine books) like Srimad Bhagavatam (Sri Vishnu Purana). The Samudra Manthana explains the origin of Amrita (Ambrosia), Kalpavriksha etc. (More names we will see below).

Samudra Manthana episode shows both greed and need, that is, Rakshasas (Demons) showed the greed, whereas Devatas (Demigods) showed their need. 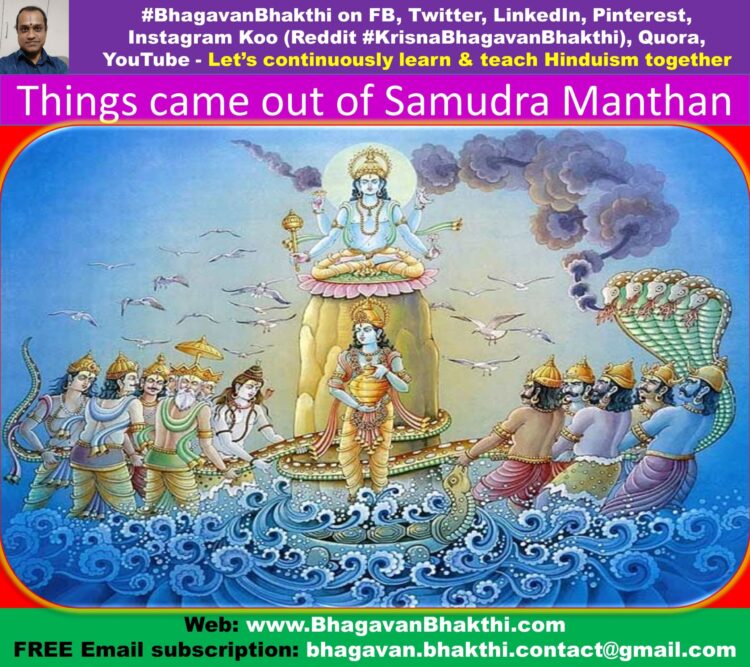 The demons preferred to hold the snake Vasuki (Lord Shiva’s snake) on the side of the head, and the Devatas (Demigods) held it on the tail side. This caused huge fatigue to the demons. 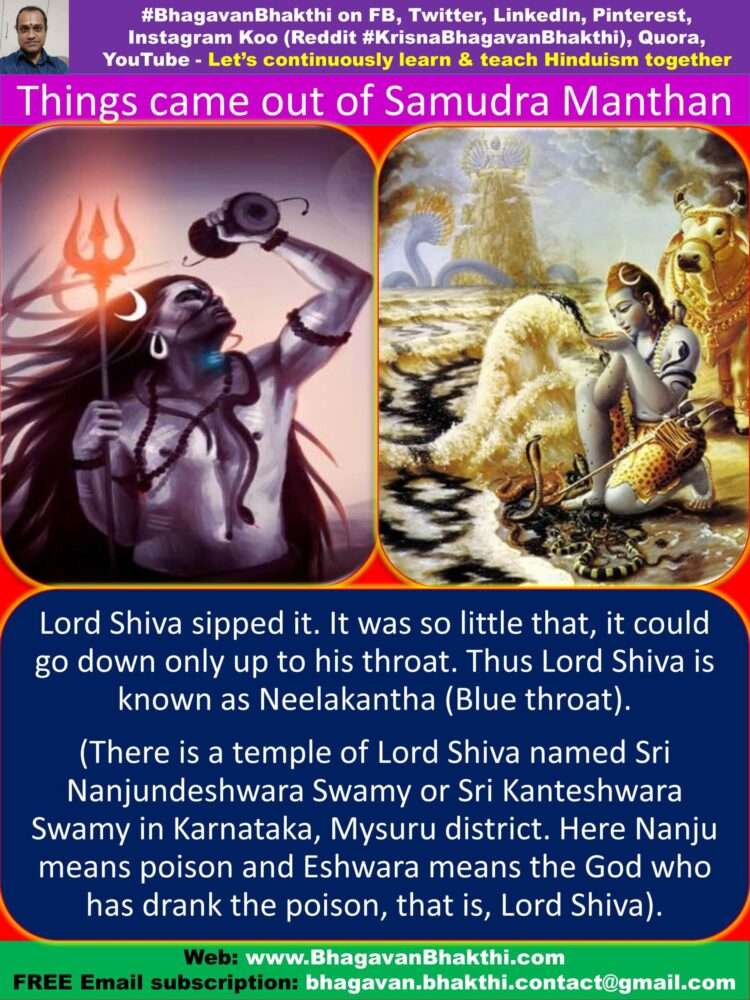 Lord Shiva sipped it. It was so little that, it could go down only up to his throat. Thus Lord Shiva is known as Neelakantha (Blue throat).

(There is a temple of Lord Shiva named Sri Nanjundeshwara Swamy or Sri Neela Kanteshwara Swamy in Karnataka, Mysuru district. Here Nanju means poison and Eshwara means the God who has drank the poison, that is, Lord Shiva).

(Sri Kanteshwara means, the God whose Kantha / neck has become blue in color).

Now, let us know the list of things which came out during the Samudra Manthana (Churning of Ocean).

All kinds of divine herbs were cast into the ocean and fourteen Ratnas (gems or treasures) were produced from it and were divided between the Asuras (Demons) and the Devas (Demigods).

Though usually the Ratnas are enumerated as 14, the list in the scriptures ranges from 9 to 14 Ratnas.

According to the quality of the treasures produced, they were accepted by Lord Shiva (because of consuming the poison), Lord Vishnu, Maha Rishi’s (for Kamadhenu or Surabhi), which was given by Lord Vishnu, the other Devatas (Demigods) and the Asuras (Demons).

There were three categories of Goddesses which emerged from the ocean.

List of things came out of samudra manthan (Churning of ocean) are as given below:

Here Goddess Sri Maha Laskhmi Devi takes the avatar as daughter of Lord Varuna, that is the Lord of the Oceans. 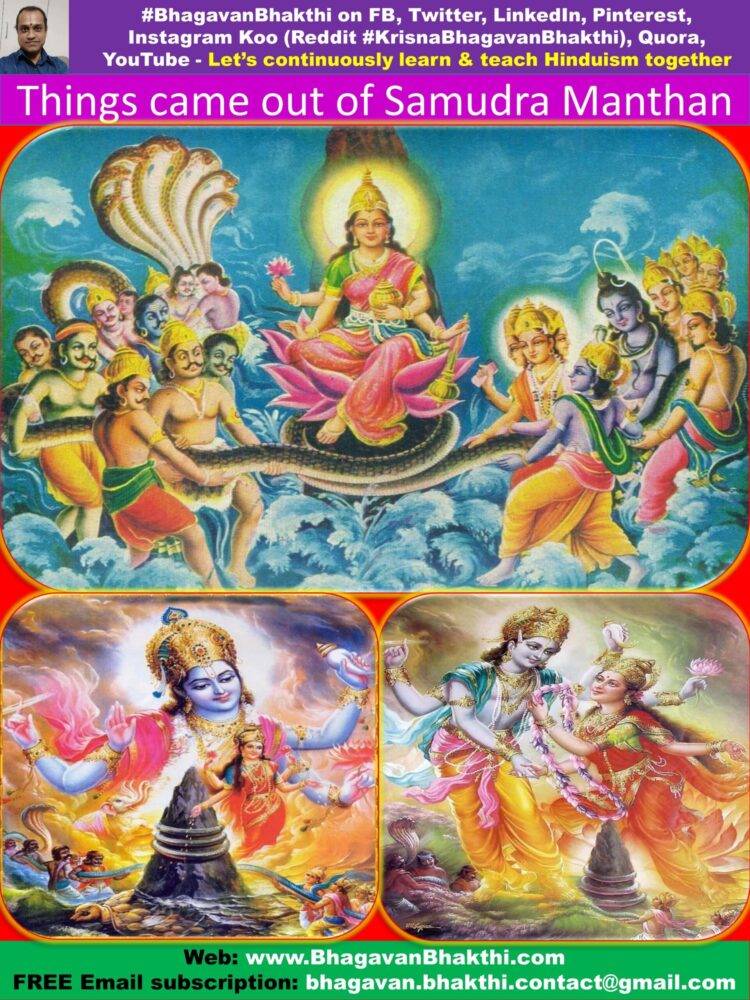 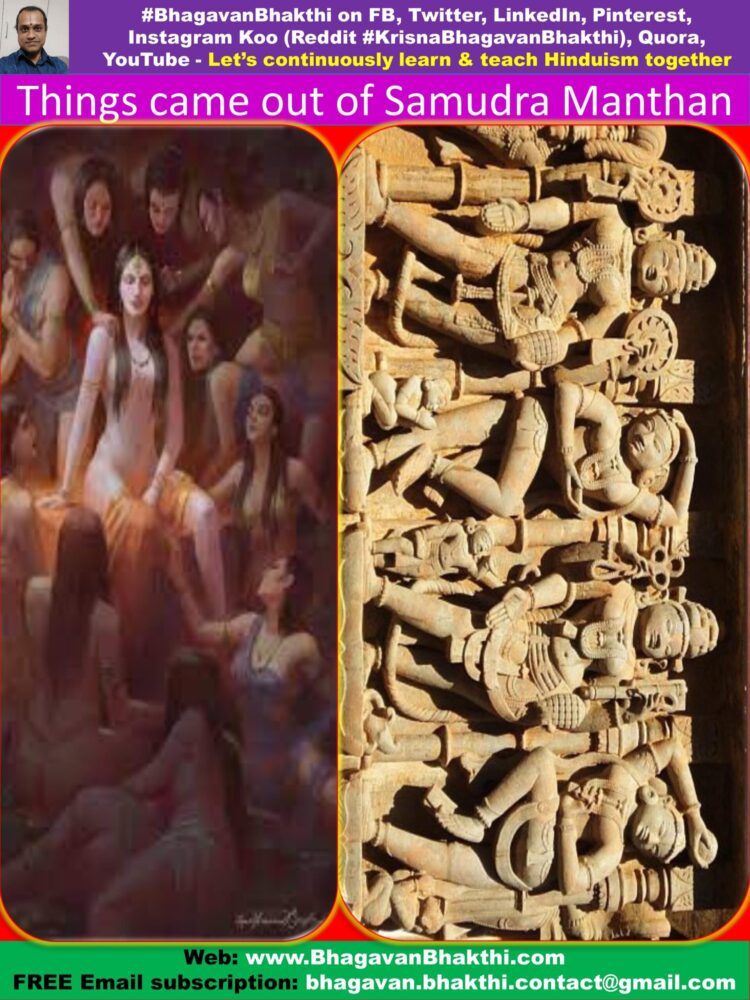 Kamadhenu (Surabhi) : Kamadhenu or Surabhi, the divine wish-granting cow, taken by Lord Brahma and given to the sages, so that the ghee from her milk could be used for Yajna and similar rituals. 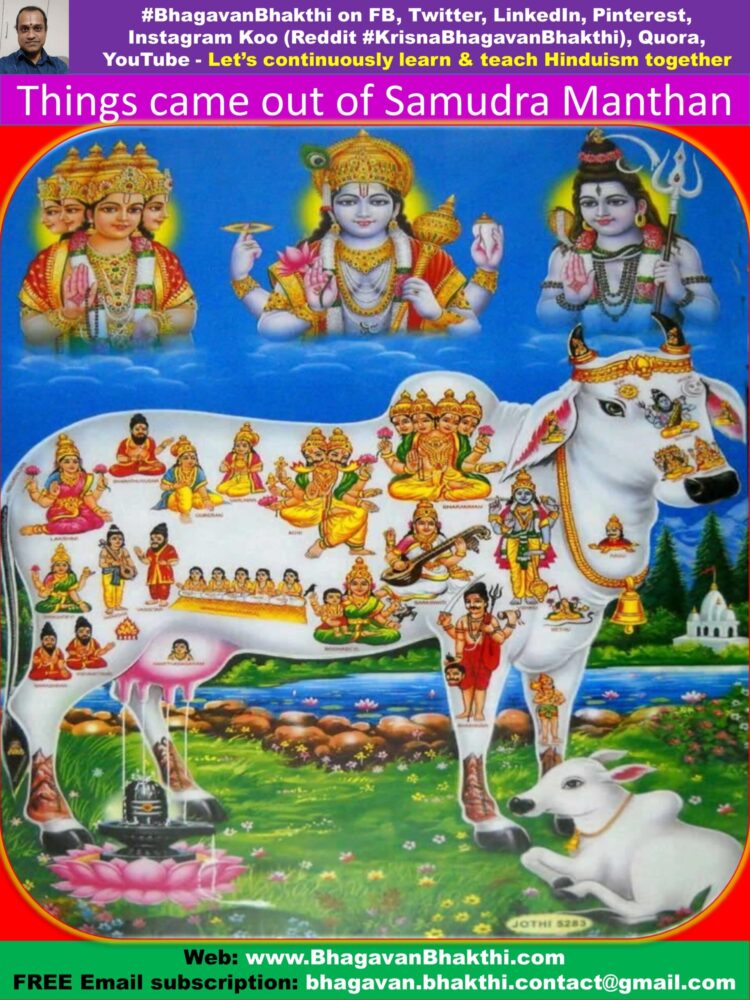 Airavata : Airavata, the divine elephant and several other elephants, taken by Lord Indra. 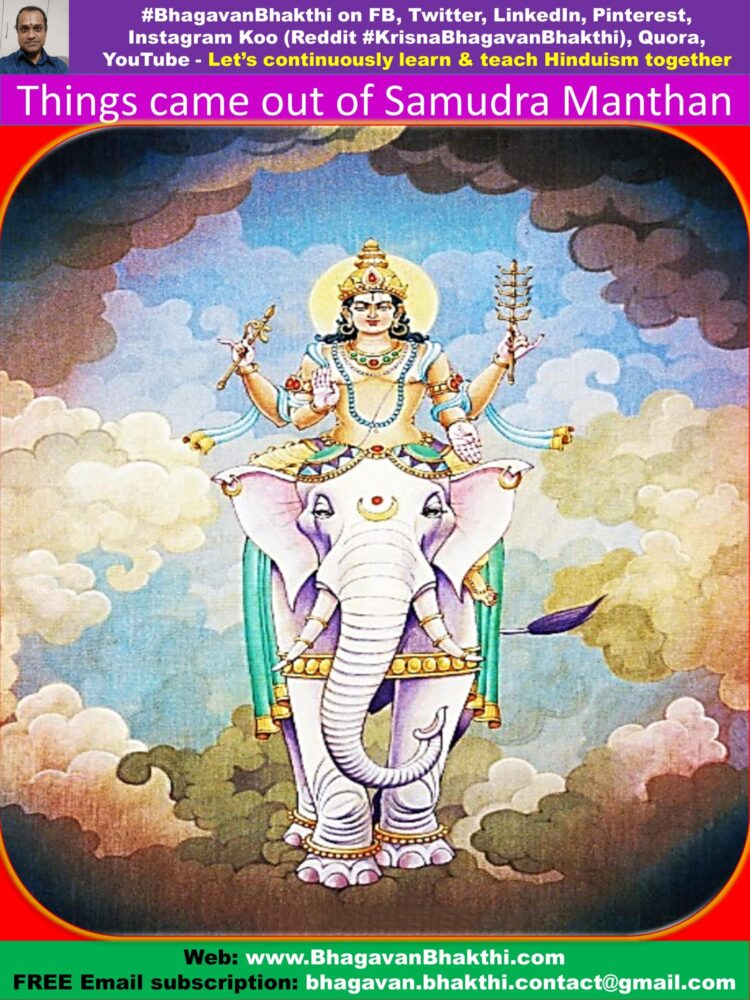 Uchhaishravas : Uchhaishravas (Seven headed horse), that is, the divine seven-headed horse, given to Bali Chakravarti (A Demon). Similarly, three valuables were also produced as written below. 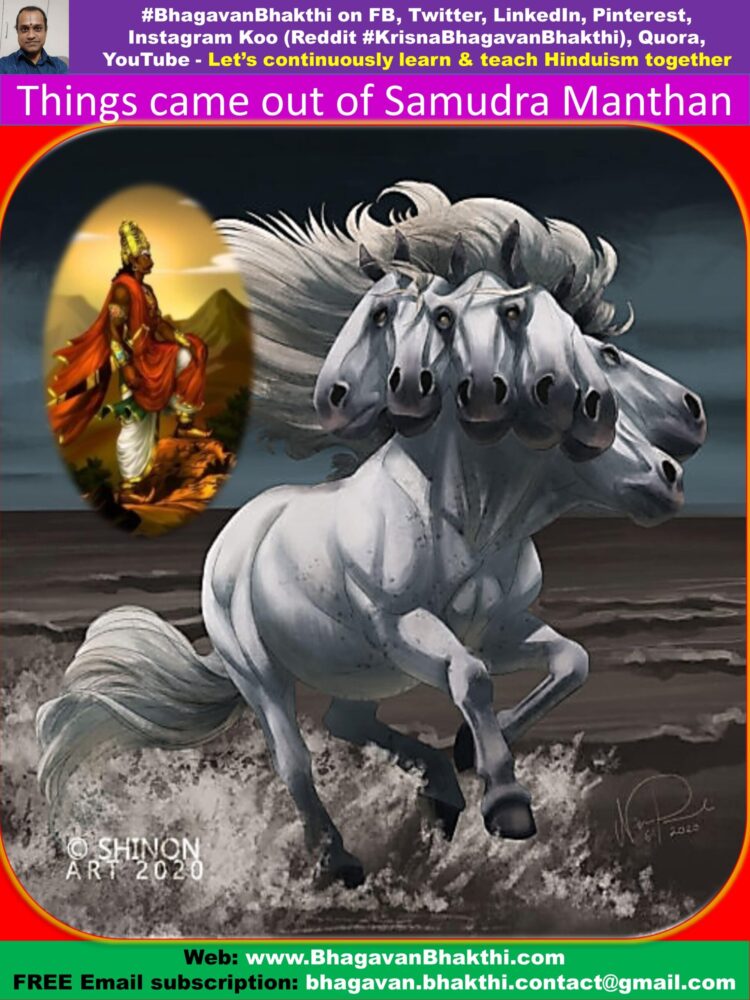 Kaustubha : Kaustubha, the most valuable ratna (divine jewel) in the unlimited universes, worn by Lord Vishnu. 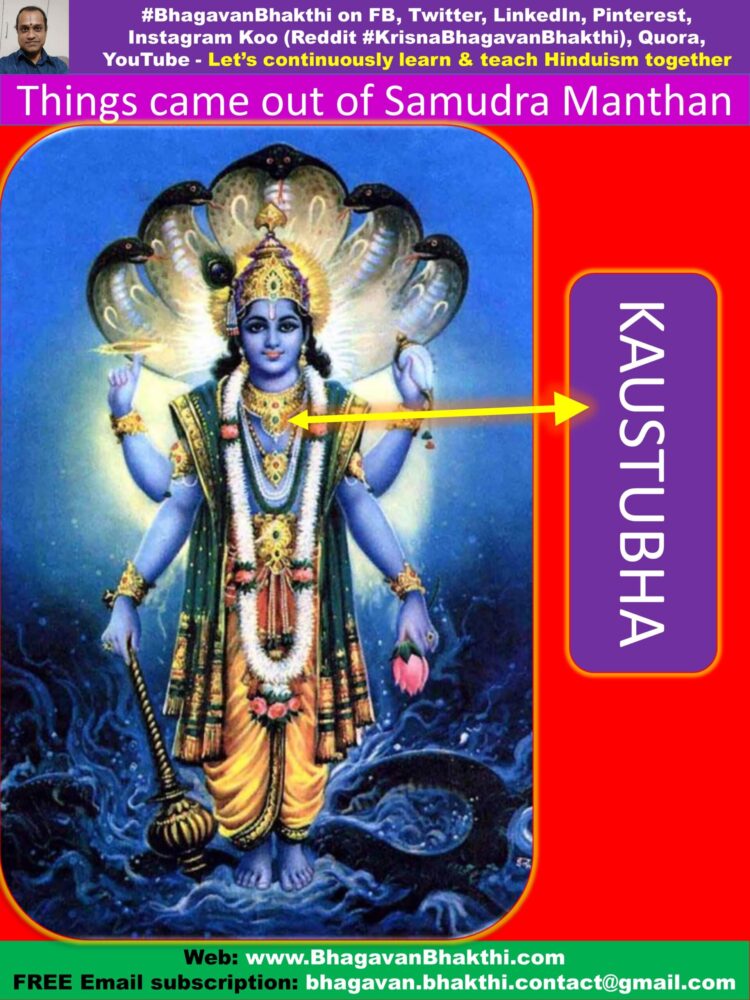 Parijata : Parijata, the divine flowering tree with blossoms that never fade or wilt, taken to Indraloka (Swarga Loka) by the Devatas (Demigods). 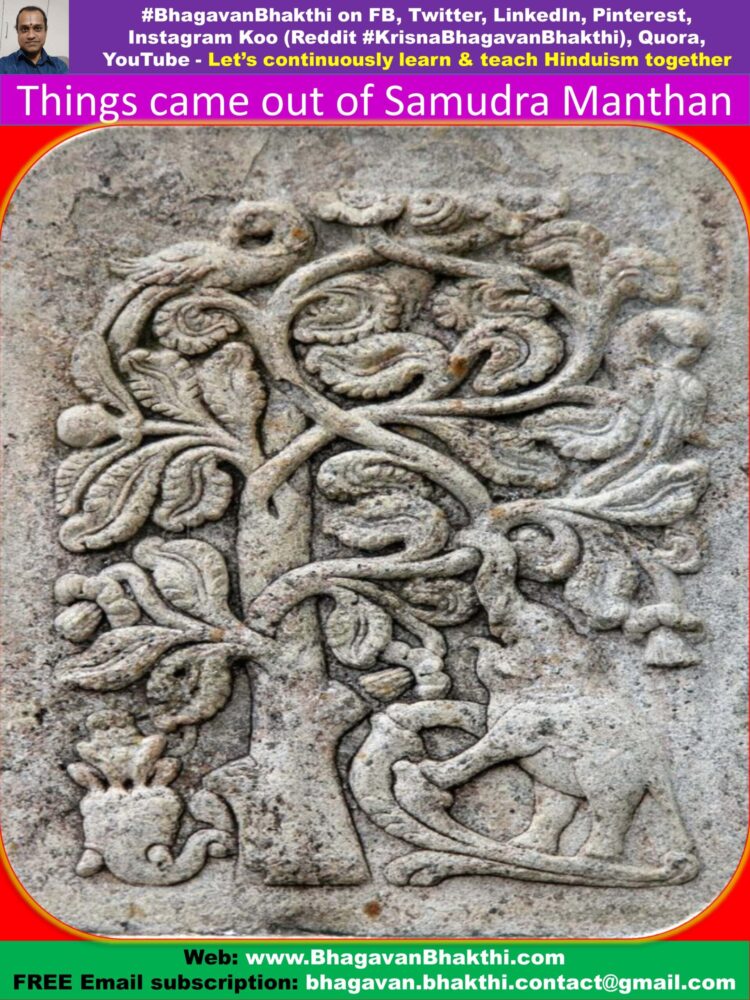 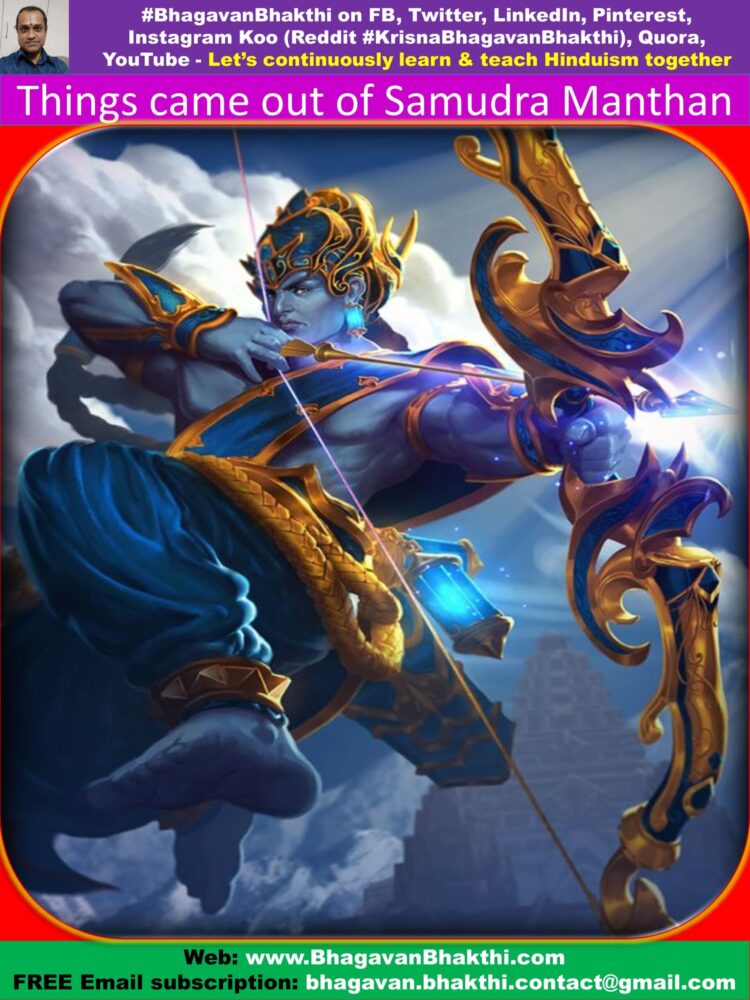 Additionally, many divine things came out as shown below. 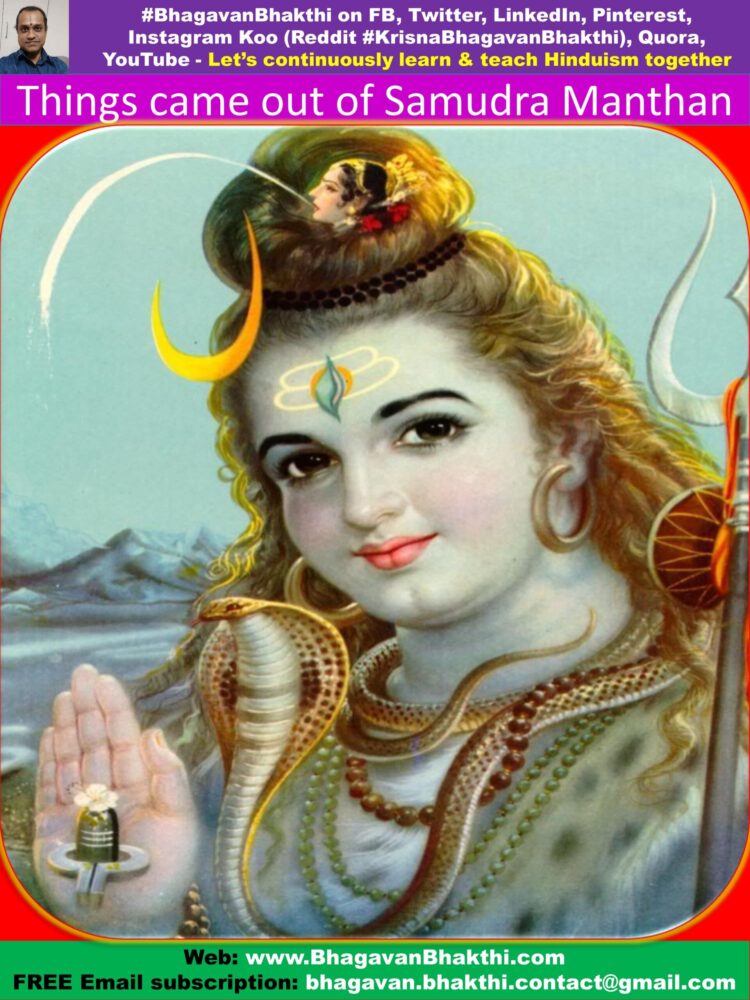 Dhanvantari : Dhanvantari, the “Vaidya of the Devatas” (Doctor of Gods) with Amrita in his hand, the nectar of immortality. 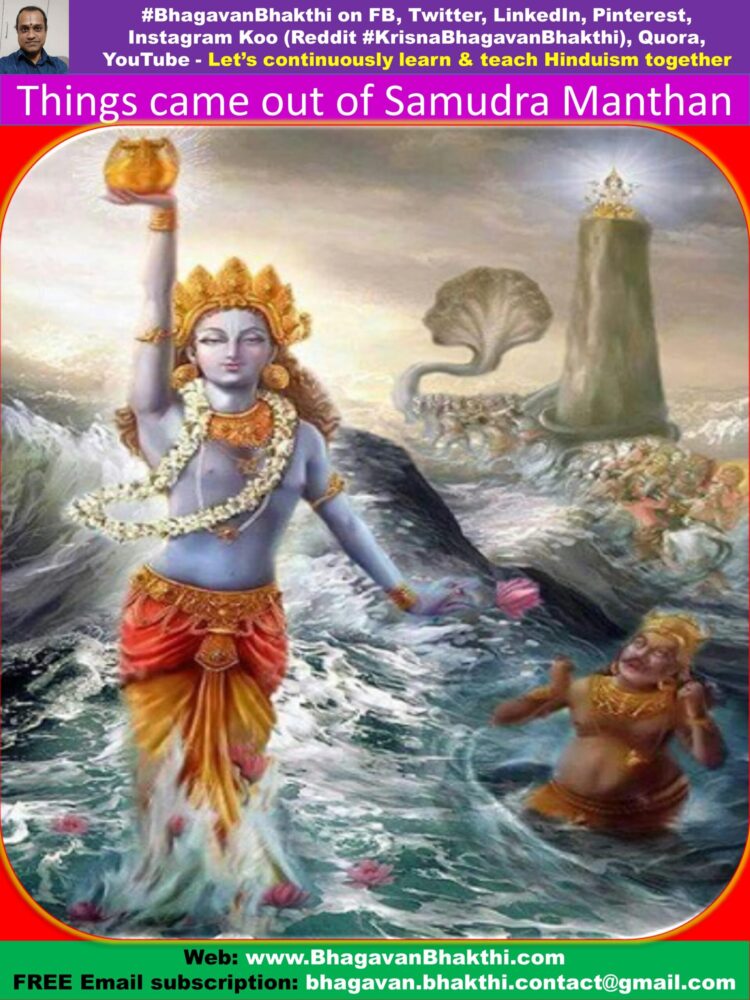 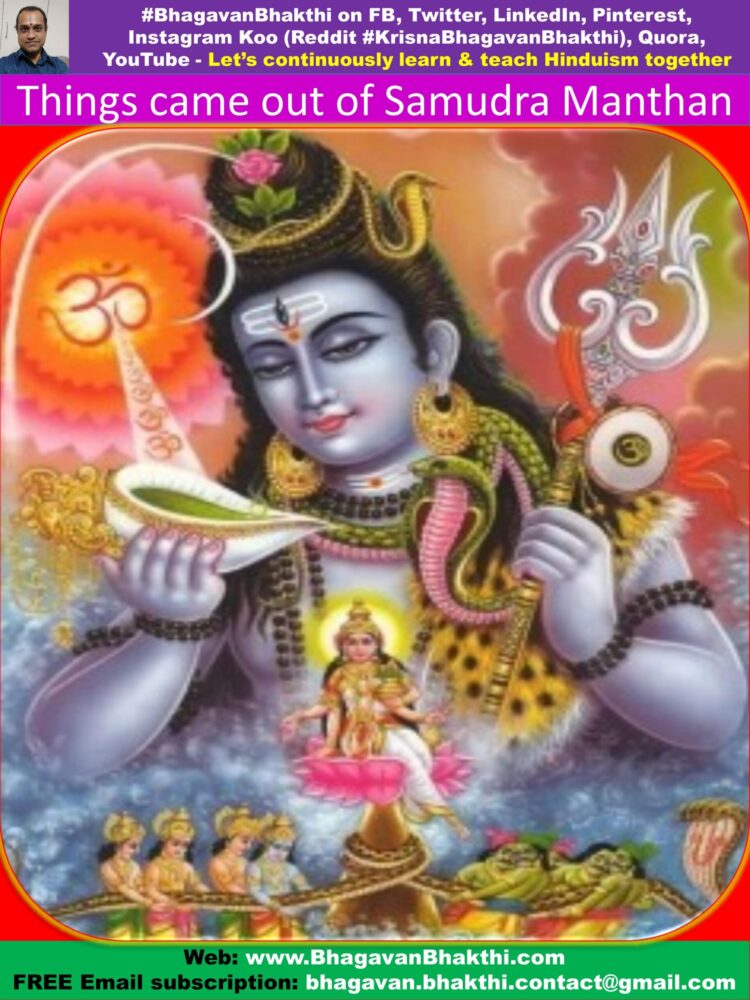 This list varies from one Purana to Purana, and is also slightly different in the Ramayana and Mahabharata also. Lists are completed by adding the following Ratnas: 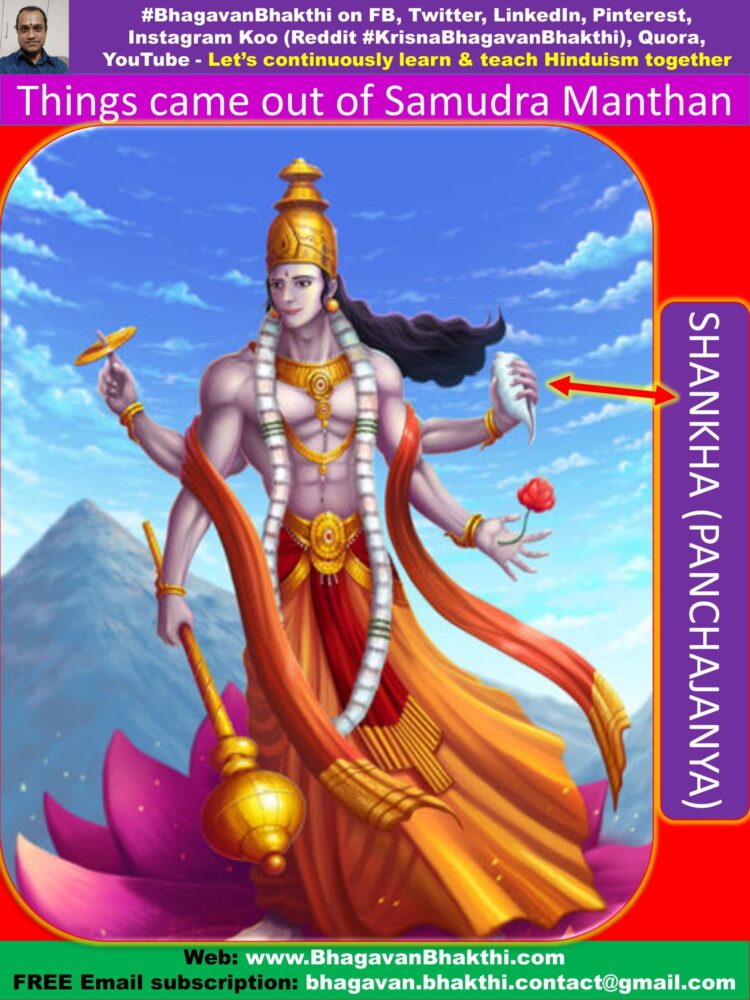 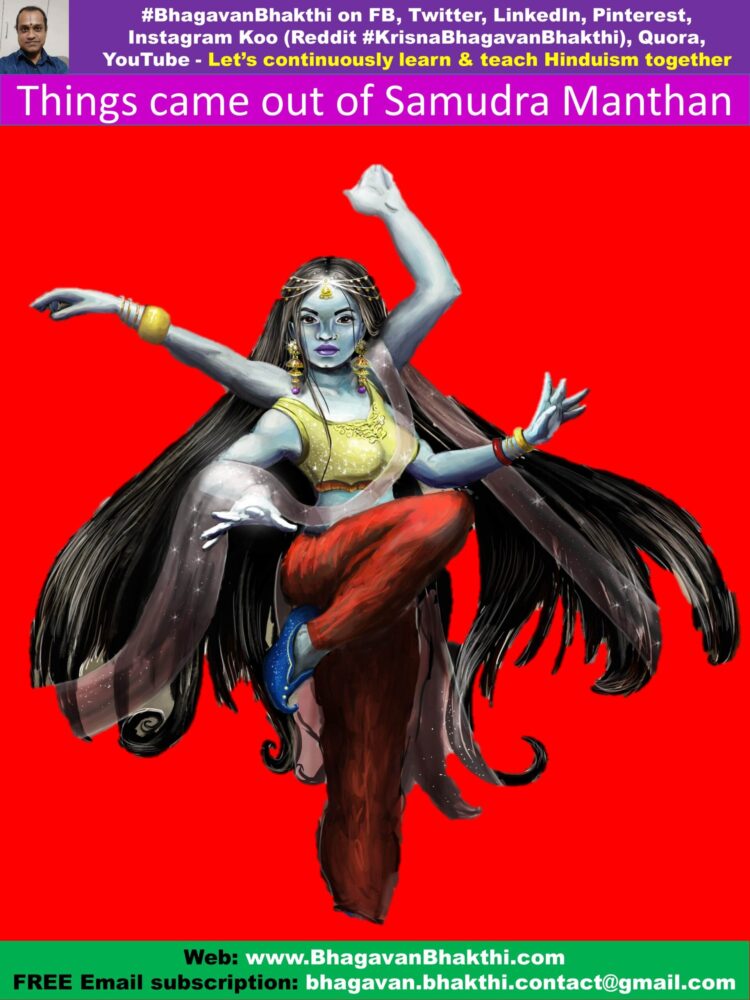 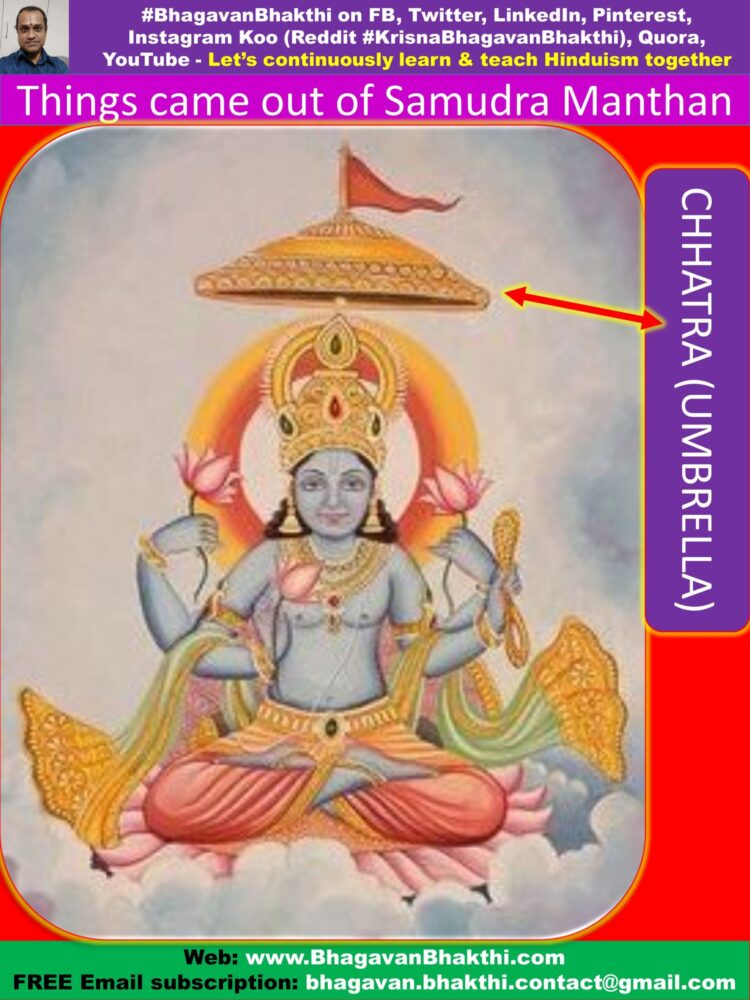 Karna Kundala : Karna Kundal, that is, the earrings given to Aditi Devi (Mother of Devatas / Demigods), by her son Lord Indra. 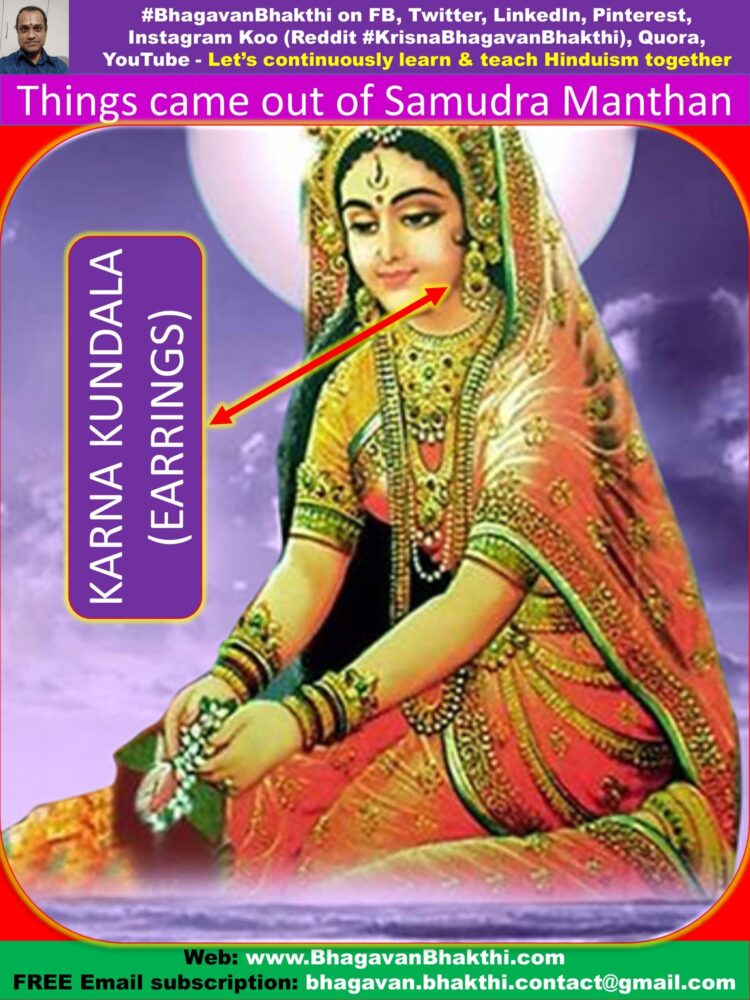 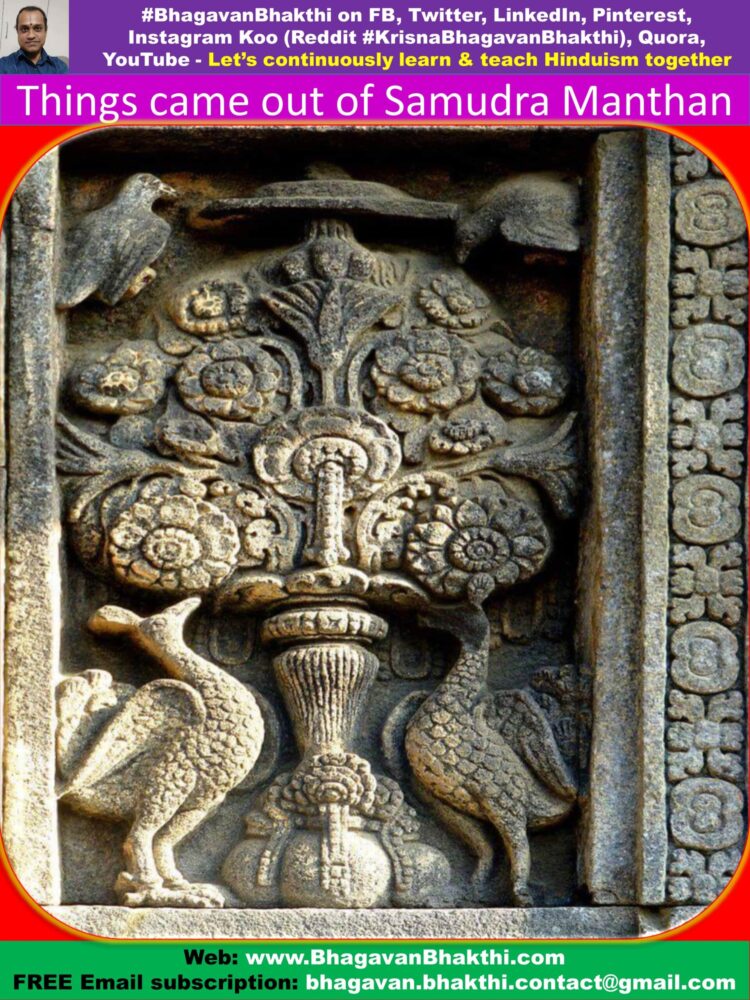 Nidra : Alasya or Nidra or sloth

Amrita : Amrita (Ambrosia) was swallowed by the Devatas (Demigods) and one Asura called Svarbhānu, also known as Rahu and Ketu, who was beheaded and sent into outer space as Rahu and Ketu by Lord Vishnu in his Mohini form. 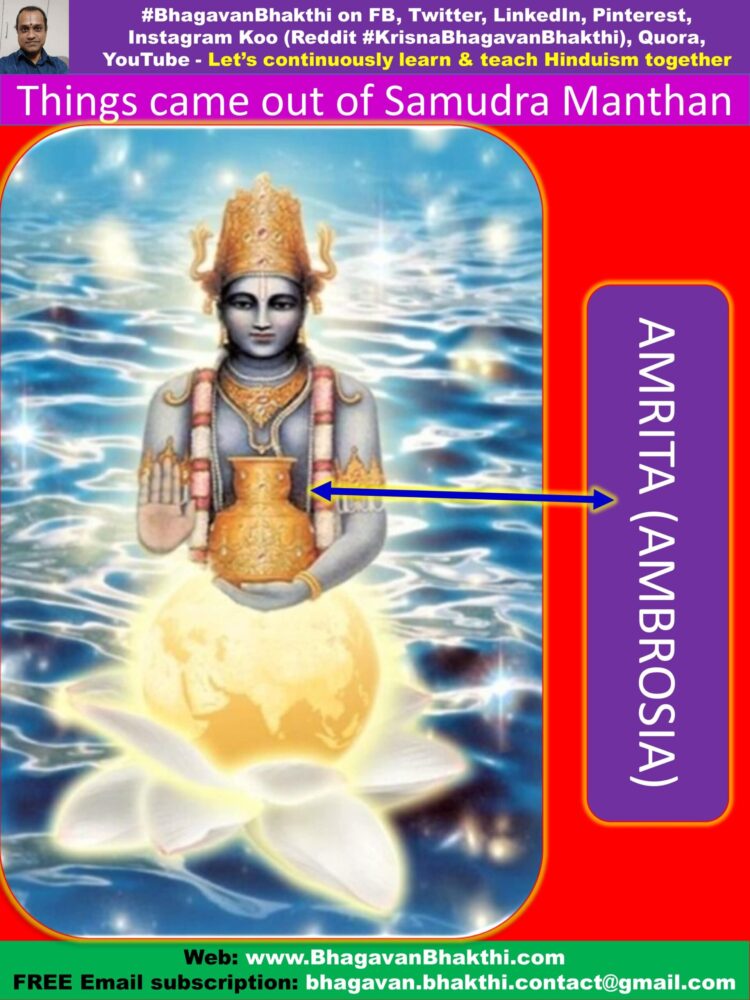 More information will be added to this on the regular basis. Please do visit after some time.

To watch the video about “What all things came out of Samudra Manthan”, click the below YouTube video link:

To know more about pilgrimage places in India, visit the below link:

To know more about Lord Vishnu, visit the below link: