Whenever there is Adharma (Going against Dharma, lawlessness, injustice, vileness, etc.) on this earth, Lord Vishnu has promised he will definitely take avatar on this earth.

The main purpose of his avatars will be either to annihilate the Adharmis and also to re-establish the Dharma on this earth or both. 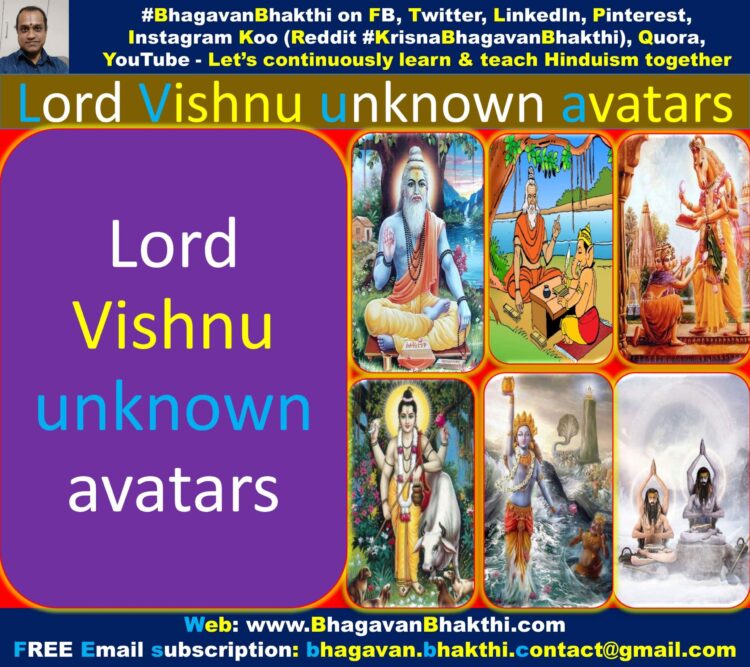 Lord Vishnu will always save the Sadhus (Followers of Dharma), Sajjanas (Dharmic people), devotees etc. on this earth and similarly he will end the atrocities against the Sadhus, Sajjanas, devotees, etc.

List of the unknown avatars of Vishnu is as given below:

Now, let us know a brief understanding of all the above avatars as given below:

Hayagriva : Here Lord Vishnu takes the avatar of Hayagriva, that is, of horse face and human body. In Sanskrit Haya means horse and griva means like.

This means, Lord Vishnu is someone who takes the form in which his face (head) will be like in the form of a horse.

Lord Vishnu in this avatar of Lord Hayagriva slays two demons called as Madhu and Kaitabha.

The bodies of the demons Madhu and Kaitabha was disintegrated into 2 * 6 times, that is, into 12 pieces.

That is, two heads, two torsos, four arms and four legs. These are considered to represent the twelve seismic plates of the Earth. 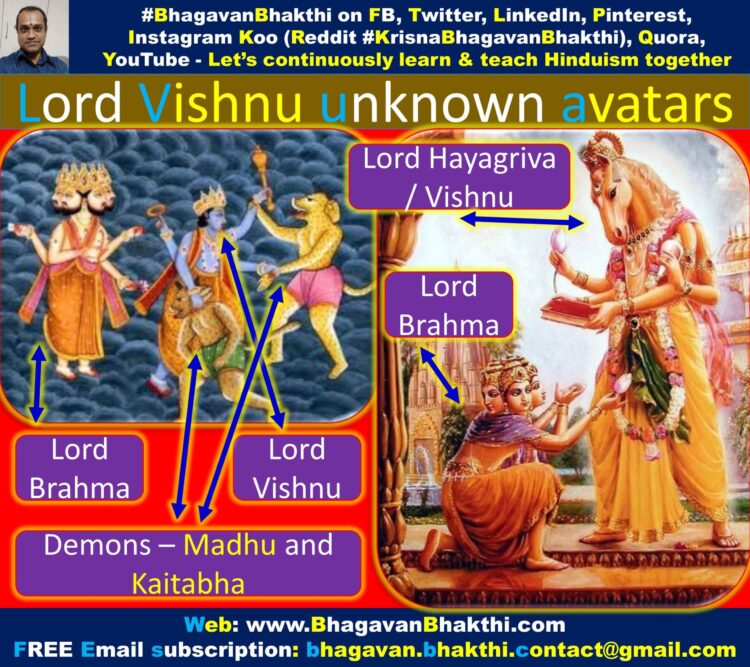 Veda Vyasa : Lord Vishnu takes the avatar of Lord Veda Vyasa Ji as the world had lost all the invaluable Shastras of the Sanatana Dharma and thus to he re-wrote all the Shastras again.

Lord Veda Vyasa Ji was born 600 years before the birth of Yudhishthira (Dharmaraya – First of the Pandavas).

The great Mahabharata, Vedas, Puranas, etc. was re-written by Lord Veda Vyasa Ji almost 600 years before the Mahabharata happened on this.

This place called Maha Badrikashrama is inaccessible to the ordinary humans of the Kali Yuga. 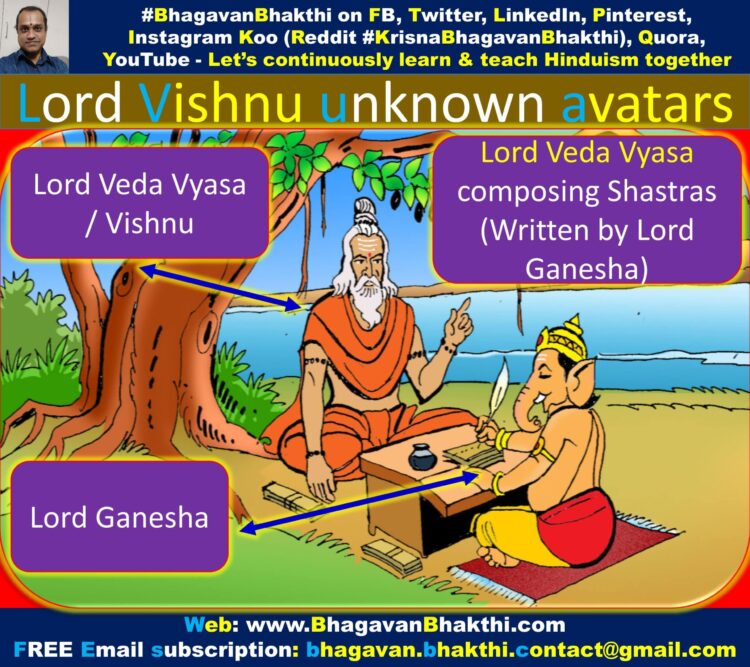 Mahidasa (Aitareya) : According to Hindu Shastras, Lord Mahidasa (An avatar of Lord Vishnu) was the son of a Rishi Vishala.

Itara came from a lower caste and named her son after her chosen deity Goddess Mahi, the Mother Earth.

Mahidasa as he was an avatar of Lord Vishnu with his great and natural aptitude, learnt all the Sanatana Dharma Shastras in a short period.

Mahidasa is also called as Aitareya, as he was the son of Itara.

Thus, Mahidasa or Aitareya named the texts composed by him as Aitareya Brahmana and Aranyaka, in fond memory and in the honor of his mother Itara. 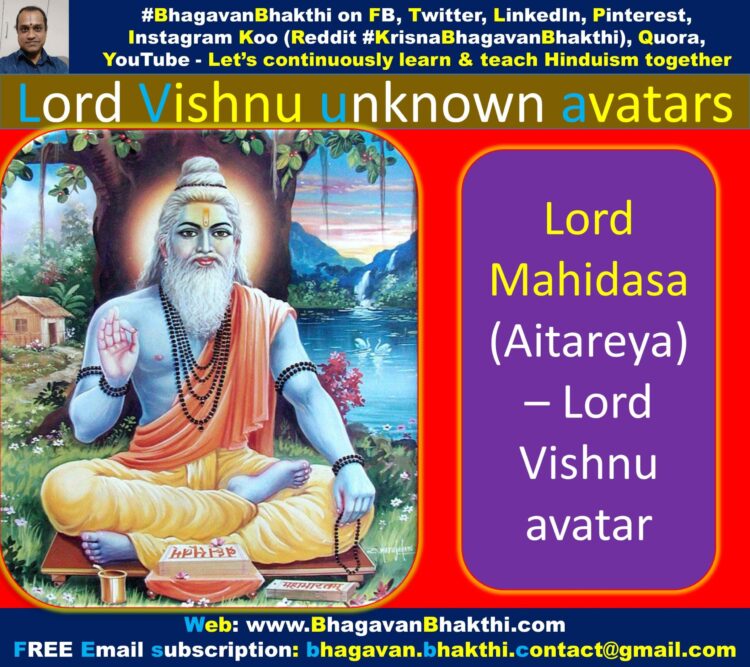 Lord Vishnu, who appeared in the name of Yagnya (Yagna) was the son of the Rishi named Ruchi Prajapati and mother name is Akuti Devi (Some pronounce this as Agooti / Aguti).

Lord Vishnu in his avatar of Lord Yagnya (Yagna) enlightened his mother with Jñānōpadēśa (Divine knowledge).

Thus, Lord Vishnu incarnates himself as Yagnya (Yajna) and held the post of Lord Indra. 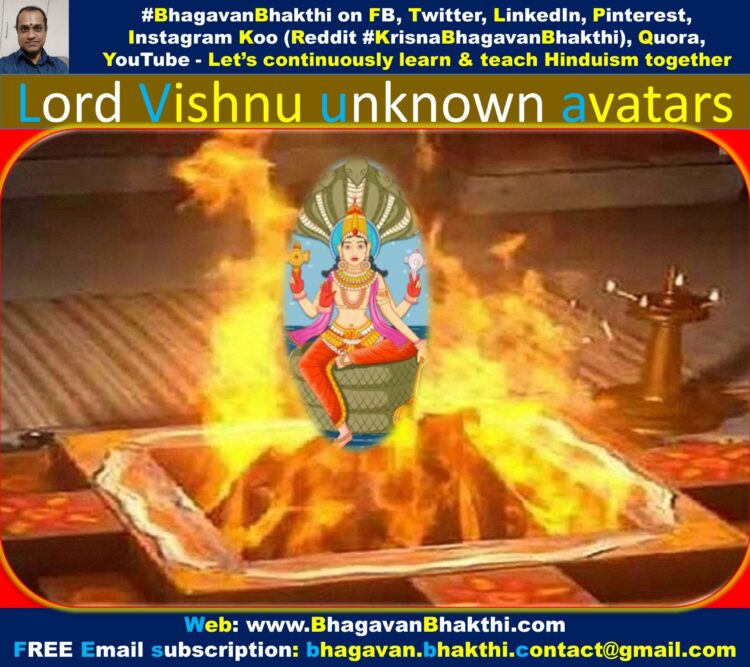 Kapila : Lord Vishnu takes this avatar of Lord Kapila as the son (10th child) of Rishi Kardama and Devahuti Devi.

Lord Vishnu, as the avatar of Lord Kapila enlightened his mother Devahuti Devi with the greatest Shastra called as Sankhya Shastra (Some pronounce it as Samkhya Shastra).

As per Vedas, Kardama was provided a boon by Lord Vishnu that, he will himself be born as his (Kardama’s son) son, attaining which Kardama had decided to leave for the forest for penance and research on Vedic studies.

Kardama had 9 daughters and these 9 daughters were highly qualified in Vedas and went ahead to marry great sages. 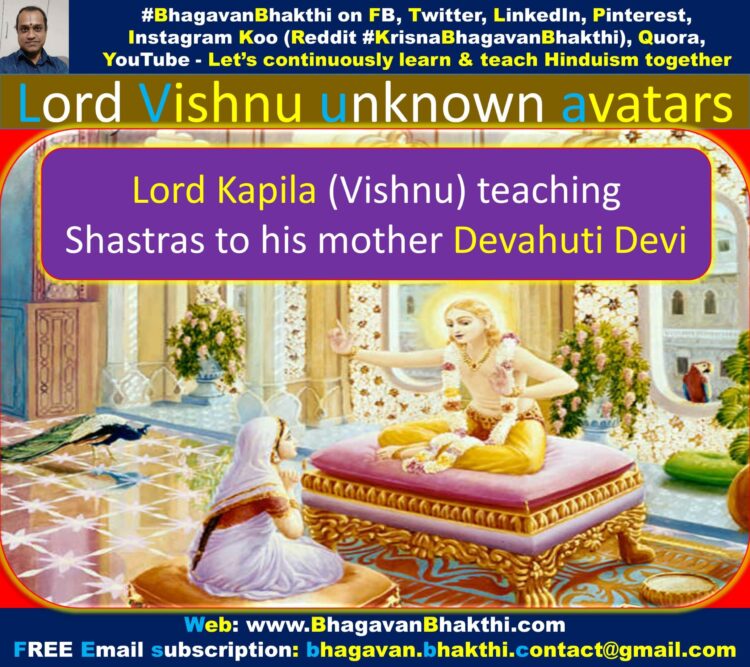 Dhanvantari : Lord Vishnu takes the avatar of Lord Dhanvantari to save the Devatas (Demigods).

At the time of Amrita Manthana (Samudra Manthana), this very Divine avatar of Lord Vishnu, that is, Lord Dhanvantari brought the divine Amrita Kalasha (Ambrosia pot / nectar of immortality).

It is an usual practice in India to worship Lord Dhanvantari seeking his blessings for healthy life for themselves and/or others, especially on Dhanteras or Dhanvantari Trayodashi (“National Ayurveda Day”). 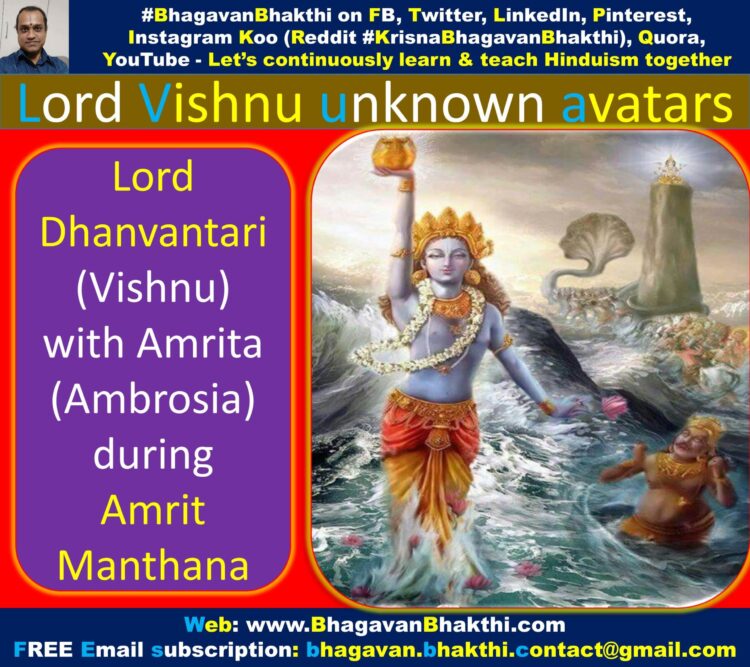 Mohini : Lord Vishnu takes this avatar of Mohini Roopa (form) to feed the Devatas (Demigods) with the divine Amrita (Ambrosia / nectar of immortality).

Lord Vishnu takes the avatar of Mohini to spread the delusion among the demons and to provide the correct knowledge and Amrita to the Demigods.

There is an important reason for this too. Demons did the Samudra Manthana to become immortal and to spread the terrorism on this earth.

While the Demigods wanted the Amrita to become immortal to do their duties like, to bring rain on earth on regular basis,

to grow crops as per requirement, to provide fire to cooking & other good purposes, to spread the knowledge on the Sanatana Dharma etc. 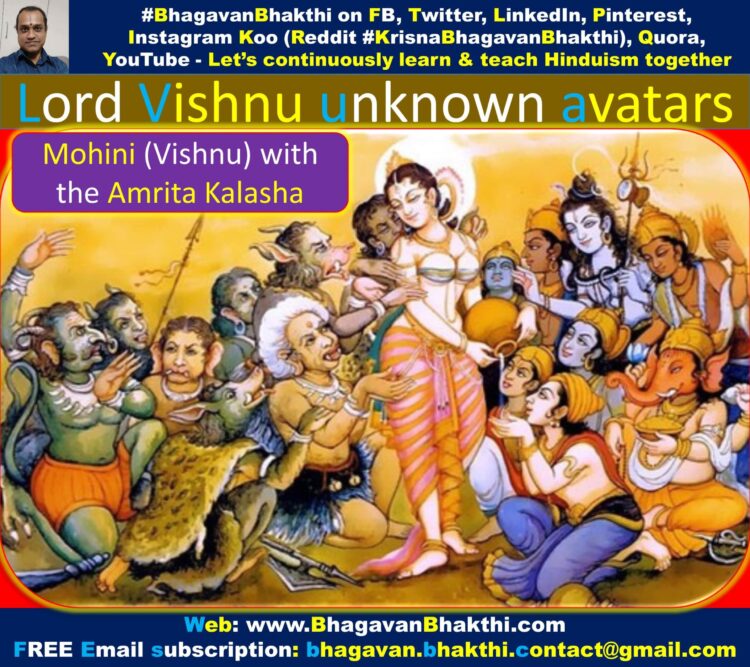 Dattatreya : Lord Vishnu takes another avatar called as “Dattatreya”, as the son of Maharshi Atri and mother Anasuya Devi for the sake of Jñānōpadēśa (Divine knowledge) to the deserving souls.

Some people confuse this Lord Vishnu avatar with 3 heads, which is completely incorrect.

Lord Dattatreya is having only one face and other two are Lord Chandra and Rishi Durvasa.

And, Rishi Durvasa is an avatar of Lord Shiva.

To know “Is Dattatreya confluence of Brahma, Vishnu and Mahesh | Lord Dattatreya has 3 faces or 1 face“, click the below link:

Is Dattatreya confluence of Brahma, Vishnu and Mahesh | Lord Dattatreya has 3 faces or 1 face 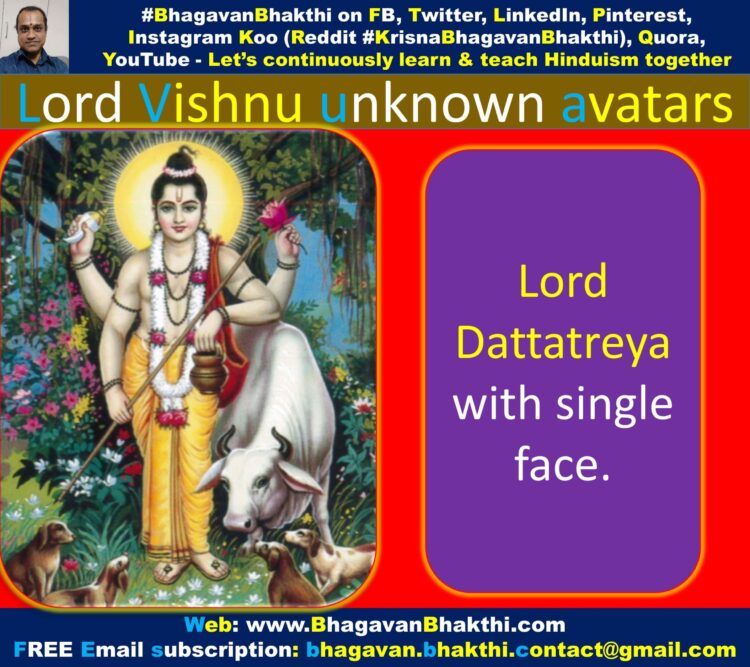 When the great Rishi Pungavas prayed to Lord Vishnu, he (Lord Vishnu) appeared before him in the form of a beautiful Kumara (young boy) and blessed Pungavas with Jñānōpadēśa (Divine knowledge).

[We should remember that, this avatar of Kumara (Sanata Kumara) is different when compared to the 4 Sanat Kumaras]. 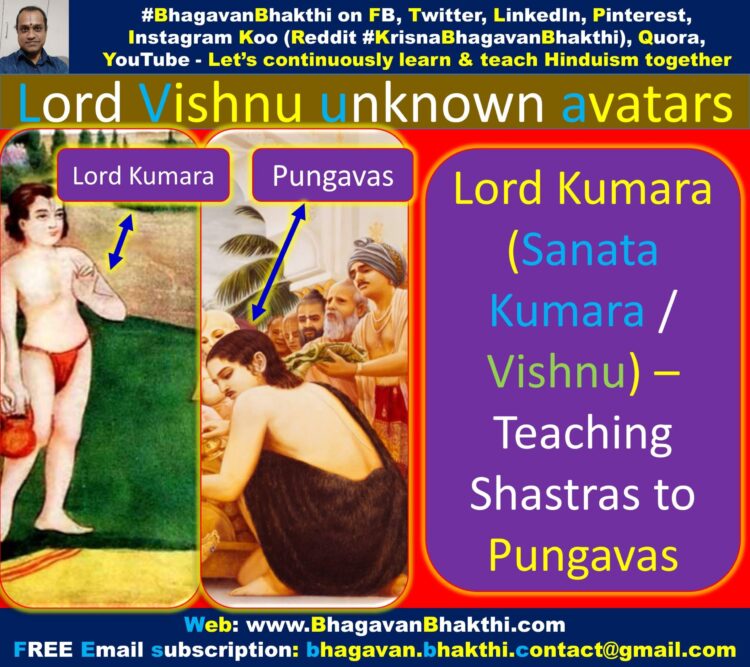 In Hinduism (Sanatana Dharma), Lord Rishabha is one of the avatars of Lord Vishnu as given in the Bhagavata Purana.

Some scholars state that this avatar is same as the first Tirthankara of Jainism.

This avatar of Lord Vishnu, that is, Lord Rishabha was a Raj Kumar (Prince) in the name of Rishabha, later he renounced everything, entered into Sanyasa Ashrama. 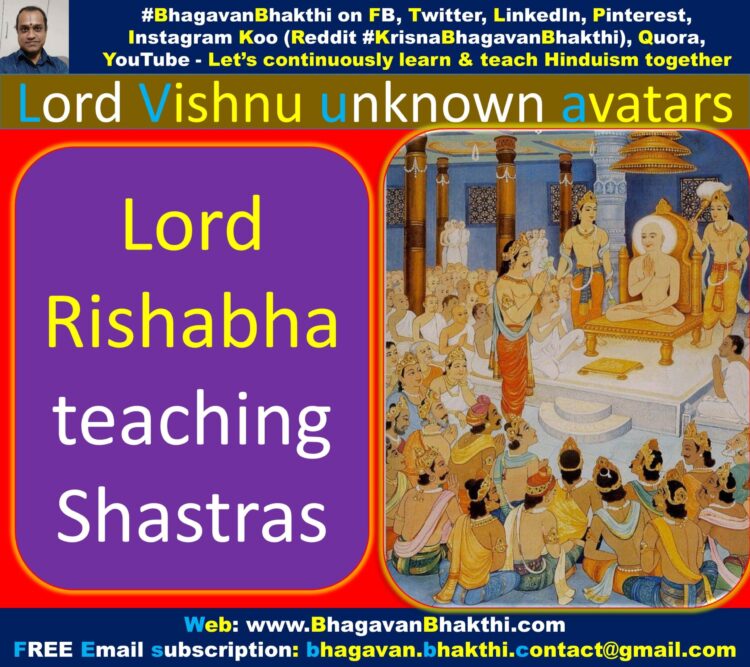 Lord Hamsa Bhagwan (Hansa Bhagwan) himself is one of the incarnations of Lord Vishnu.

Thus, Lord Vishnu descended on earth to preach Vedas to the Sankadi sages, the sons of Brahma, in the name of Hansa (Hamsa).

And in answer to their prayer, Lord Vishnu appeared before them (4 Sanat Kumaras) in the form of a bird Hamsa (Hansa) (swan) and gave them the Jñānōpadēśa (Divine knowledge). 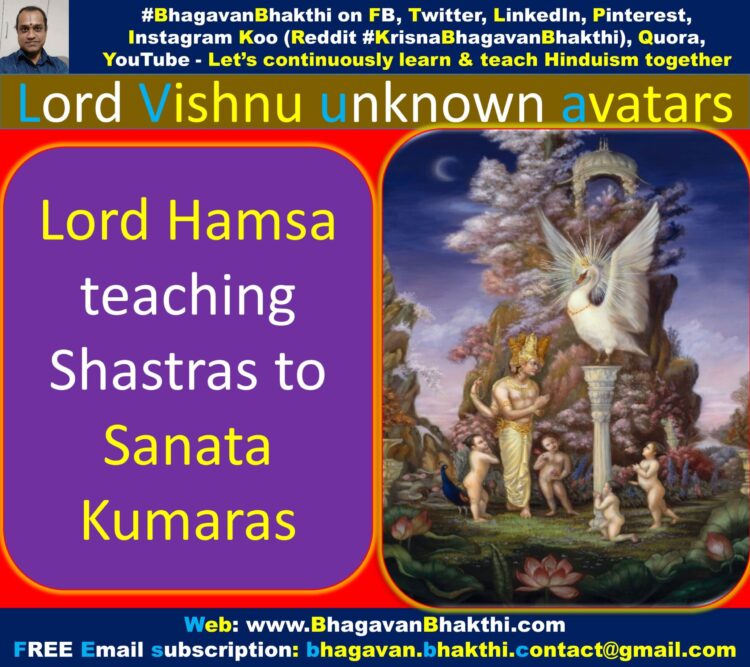 Lord Narayana is the same as the Nara Narayana. Nara and Narayana, even today are residing in the divine Badrinath (Narayana Badrikashrama).

(Narayana Badrikashrama is inaccessible to common people of Kali Yuga).

But, we should always remember that there is no difference between Lord Vishnu himself or his any of the avatars. 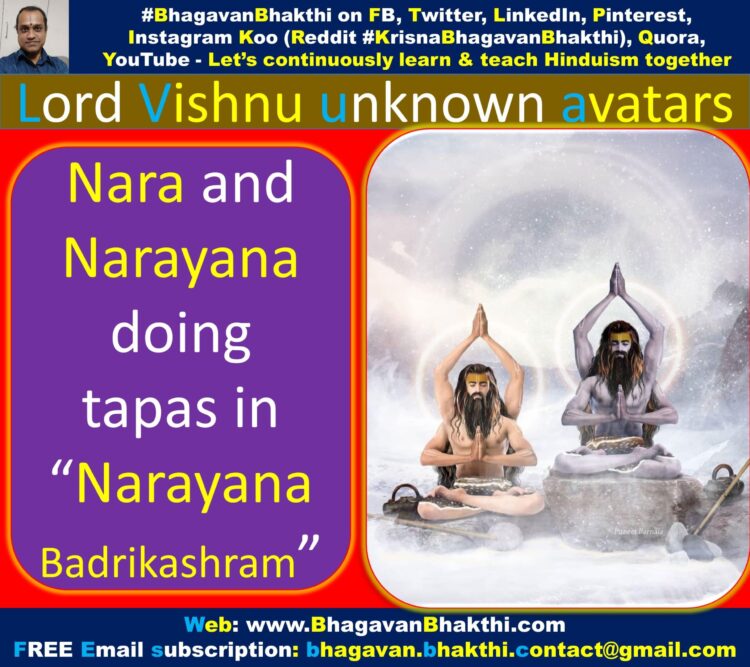 Tapasa : This avatar Lord Vishnu takes to save the Gaja (Elephant) from the clutches of Graha (Crocodile) during the Satya Yuga.

Thus Lord Vishnu takes the avatar of Tapasa, comes on Lord Garuda and saves Gaja (Elephant) from the clutches of Graha (Crocodile).

Finally, Lord Vishnu gives Gaja (Elephant) the divine Moksha (Mukti / Liberation), that is, a place in Vaikuntha. This phenomenon is called as “Gajendra Moksha”. 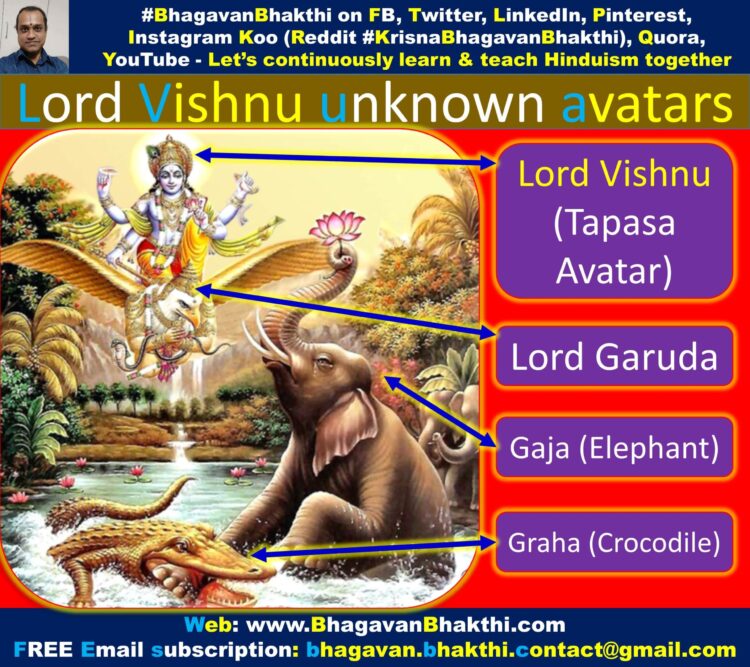 Know more information about Lord Vishnu from this below link: