Who are Prachetas and their wife Marisha

In the vamsham (family) of the Raja Prithu, there was a Raja called Raja Prachinvarhi, whose vivaham (marriage) took place with the putri (daughter) of Samudra Raja (Ocean King), Savarana.

With this vivaham (marriage) ten putras (sons) were born and they were known as Prachetagan (Pratechas).

Here we should know why the ten Prachetas performed this type of tapasya / penance for ten thousand years? 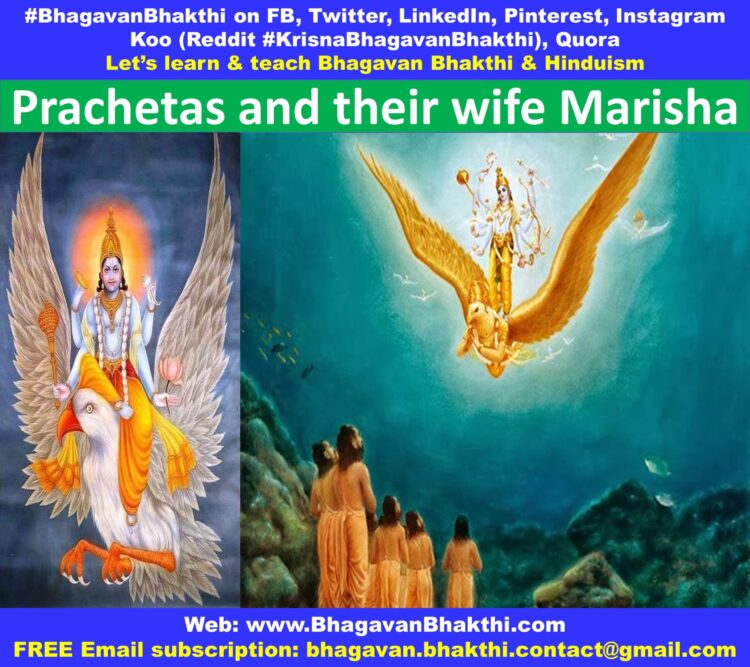 But the ten Prachetas were unaware to how to go ahead with this kaaryam (work).

Also Prachetas’ father told his putras (sons) to pray to Bhagavan Sri Vishnu to initiate the kaaryam (work) as told by Brahma Deva.

Thus after hearing from their father, Prachetas started the ghana-ghora tapasya (very very hard penance) under the samudram (ocean).

Thus the ten Prachetas requested Bhagavan Sri Vishnu to grant them the ashirvadam (blessings) to make this bhoomandalam (earth) with the manushya jeevi (men and women).

Thus granted the varam (boon) to the ten Prachetas by Bhagavan Sri Vishnu.

With this krodam (angry), the Prachetas started to blow heavy vayu (air) and agni (fire) all over to make naashanam (destroy) of the unwanted vruksham (trees).

Also Chandra Deva informed to Prachetas in turn he will marry the Prachetas with a baalika (young girl) nanam (named) Marisha who the Chandra Deva had brought up.

(It also said that Brahma Deva informed to Prachetas that Marisha can make vivaham with the Prachetas). 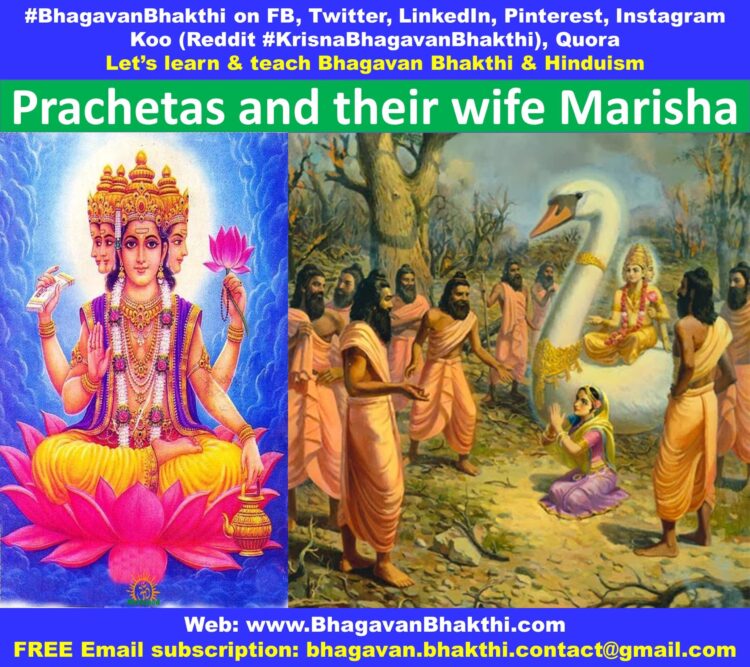 Also Chandra Deva told the story of the Marisha to the ten Prachetas:

Many years before there lived a Rishi Kandu on the nadi teeram (river side) of Gomati.

But Indra Deva didn’t like this and tried to stop the tapasya / penance.

After reaching near to Rishi Kandu, Pramalocha started to dance with different positions to attract Rishi Kandu and the same thing happened.

Rishi Kandu fell in premam (love) of the Pramalocha and both got vivaham (married).

Both started to live with santosham (happiness) for many many years.

Thus one hundred years passed by and Pramalocha requested the Rishi Kandu to return back to swargalokam (Divine Heaven).

But Rishi Kandu said that it is yet a very short time since you have come and please stay back for some more time.

Thus again one more hundred years passed by and again Pramalocha explained her desire to return back to swargalokam (Divine Heaven).

But the answer from the Rishi Kandu was the same to stay back by Pramalocha.

Thus, this went on and on and thus of total of nine hundred & eighty seven years, six months and three days had passed.

After this, one evening Rishi Kandu called upon his apsara patni (wife) Pramalocha and told her to leave right now since it was already a day has passed and it is almost evening now.

But Pramalocha told that it is already nine hundred & eighty seven years, six months and three days had passed.

Hearing this Rishi Kandu was surprised and told Pramalocha to leave immediately and informed her go back to her place.

With this a stree shishu (baby girl) was born and her nanam (name) was Marisha.

In an earlier life Marisha had been married to a Raja when she was very young.

But unfortunately she lost her pati (husband) at her very young age.

Thus Marisha had prayed to Bhagavan Sri Vishnu to get her good and healthy husbands who can live with her for long times in her next janmas (lives).

Thus Bhagavan Sri Vishnu had given the ashirvadam (blessings) to Marisha that in this janma (life) she will get good and healthy patis (husbands) who would live with her for a very long-long time.

Thus Marisha got vivaham (married) with the ten Prachetas at a same time and she lived with lot of santosham (happiness) with her ten patis (husband).

A son named Daksha had born (he is the same Daksha who in the earlier janma / life had born to Brahma Deva as Daksha and had all the qualities of a Brahma Deva).

These thirteen were the most important to bhoomandalam (earth) because of these thirteen baalikas (ladies) the jana sankyam (population) of the living beings of the prithvi (earth) is directly correlated. 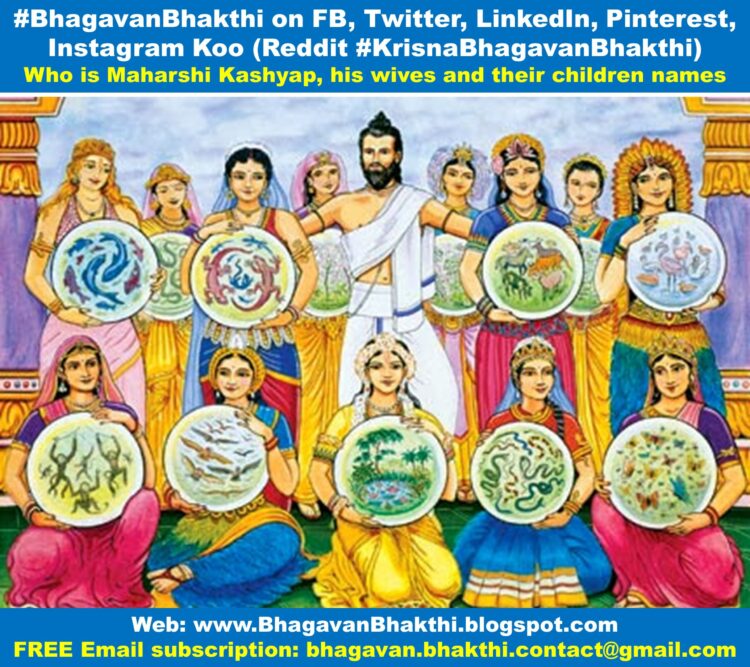 To know the complete list of wives of the Great Kashyapa Maharshi and their children, visit this below link:

Who is Kashyapa Maharshi, wives and their children names

To know about the “What are the names of Sapta Rishis and their details”, click the below link:

What are the names of Sapta Rishis and their details