What is Rigveda first shloka (rik / sukta) (hymn) with meaning

Just before going to know about the first shloka (rik / sukta) (hymn) of Rigveda with meaning, let us have a brief idea about few important points.

We should always remember that, all mantras, shlokas, stotrams, words, alphabets, etc. always extol and eulogizes only Lord Vishnu.

Even all the Puranas, Upanishads, Itihasas, Ramayana, Mahabharata etc. have been revealing the same since the ‘aadi kalam’ (grand unknown time). 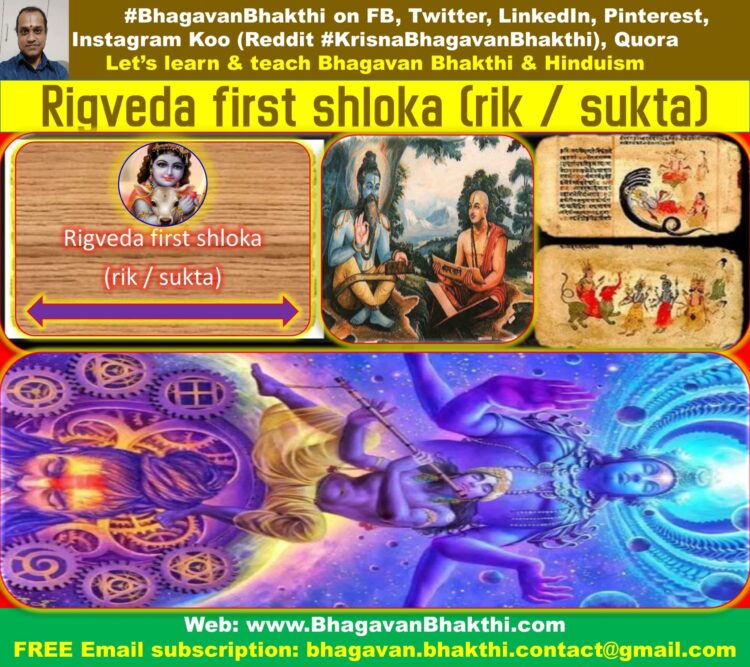 Even the great Vedas have instructed that Lord Vishnu is the supreme and one and only Ishwar (God) and all others are Devatas (Demigods) starting from Goddess Lakshmi, Lord Brahma, Goddess Sarasvati, Lord Shiva, Goddess Parvati, Lord Indra, Lord Kama Deva, Lord Surya Deva, Lord Chandra Deva, etc.

Thus, it is natural to sneak into the great Vedas and see how it is so. Just moving forward let us know the meaning of the word Rigveda first.

From outside, it may look that the four Vedas including Rigveda is praising all the Devatas (Demigods), but actually all the Vedas are praising only Lord Vishnu.

Rigveda is the oldest known text of the universe. Even Devatas (Demigods) do the shravana and adhyayana (Hearing and understanding) of this great Rigveda since ‘aadi kalam’ (grand unknown time). 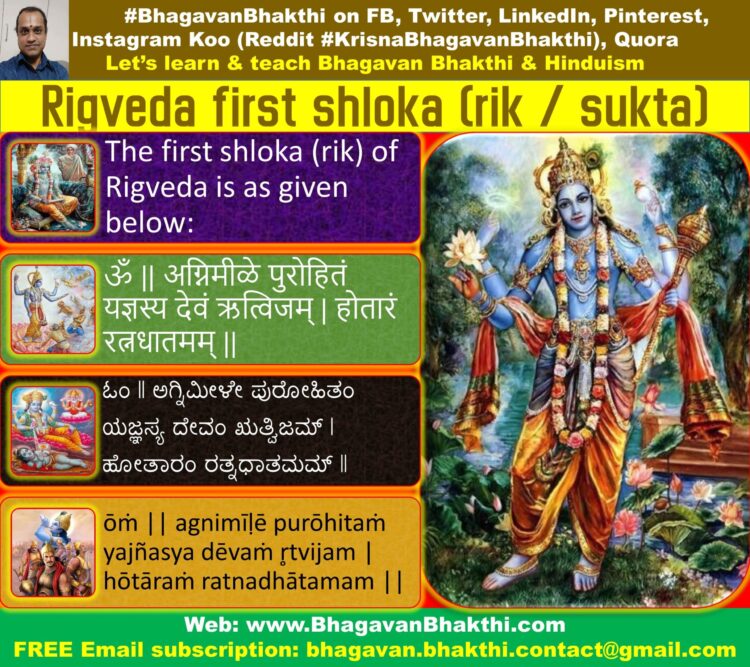 The first shloka (rik) of Rigveda is as given below:

Here the Devata (Demigod) Lord Agni Deva is praised with 5 attributes as given below:

Meaning of the above shloka (Rik)

1. Purohitam (पुरोहितं / ಪುರೋಹಿತಂ / purōhitaṁ) : Purohitam means, one who does and wishes only good things to all beings irrespective of anything since the ‘aadi kalam’ (grand unknown time / time immemorial). 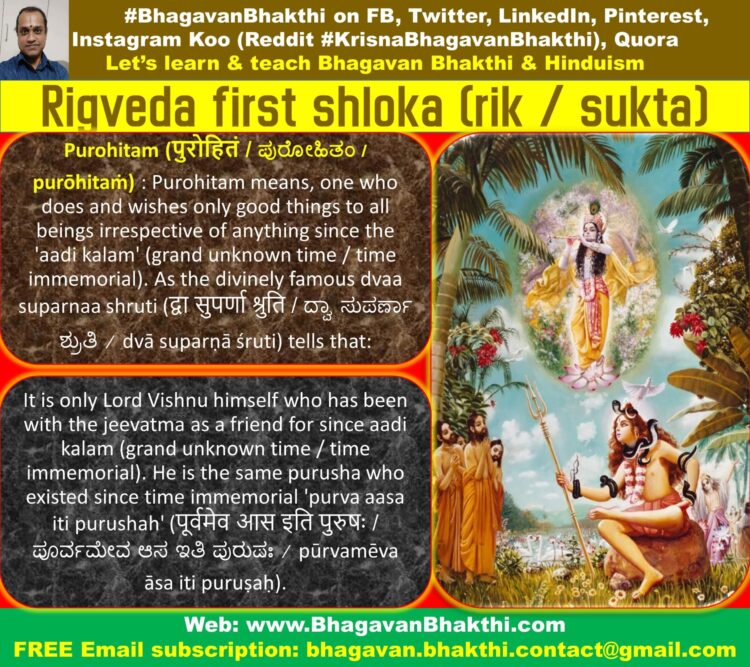 It is only Lord Vishnu himself who has been with the jeevatma as a friend for since aadi kalam (grand unknown time / time immemorial). He is the same purusha who existed since time immemorial ‘purva aasa iti purushah’ (पूर्वमेव आस इति पुरुषः / ಪೂರ್ವಮೇವ ಆಸ ಇತಿ ಪುರುಷಃ / pūrvamēva āsa iti puruṣaḥ).

This means, Lord Vishnu is such kind of Supreme Personality (puruṣaḥ), that he is existing since the time immemorial (pūrvamēva). Thus he is none other than Lord Vishnu (Lord Narayana) himself. 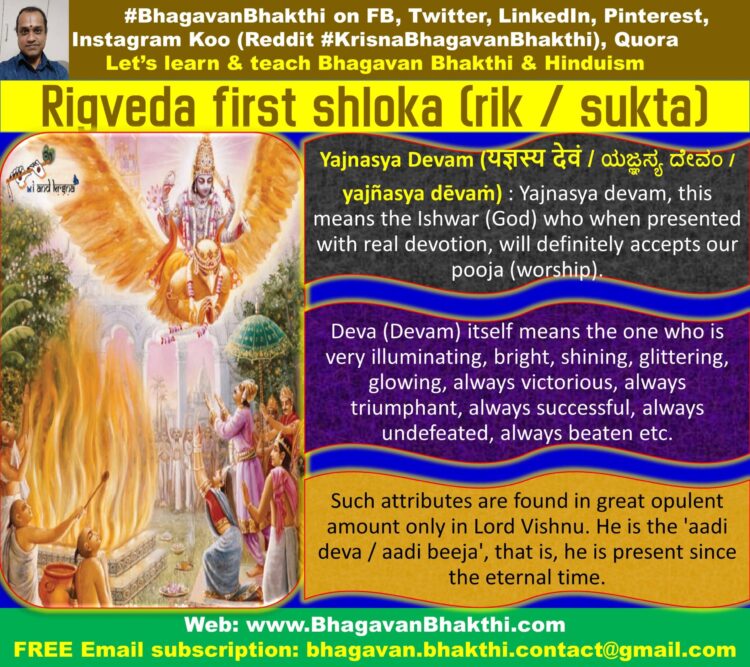 Such attributes are found in great opulent amount only in Lord Vishnu. He is the ‘aadi deva / aadi beeja’, that is, he is present since the eternal time. 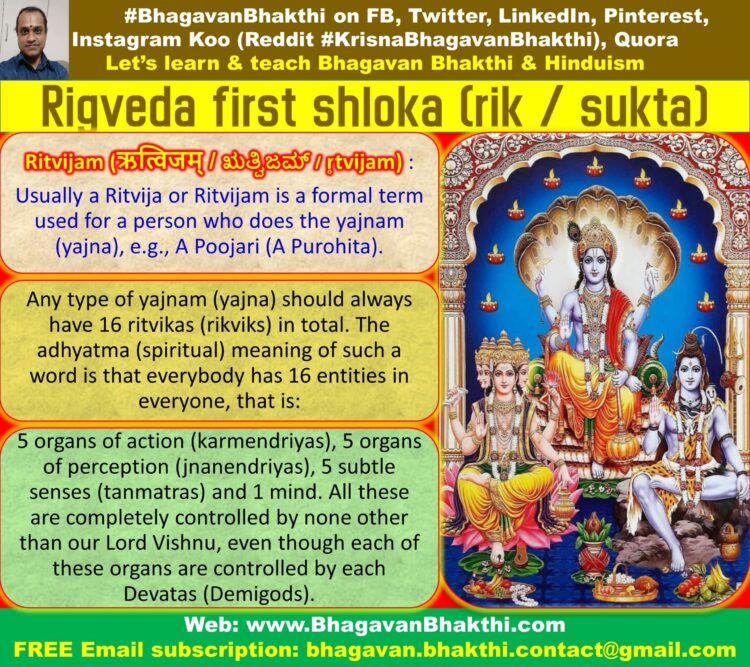 Any type of yajnam (yajna) should always have 16 ritvikas (rikviks) in total. The adhyatma (spiritual) meaning of such a word is that everybody has 16 entities in everyone, that is:

To know more information about Devatas (Demigods) or tatvabhimani Devatas who control our body parts, please click the below link: 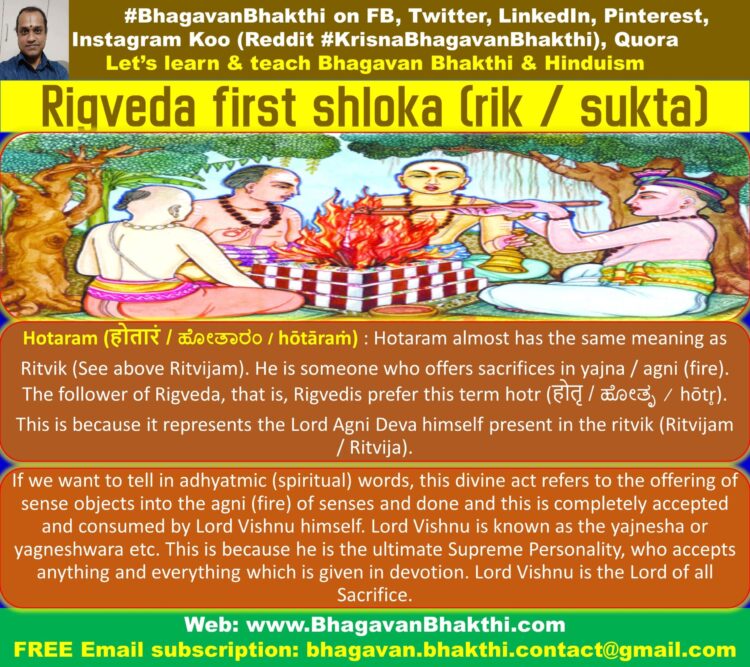 The follower of Rigveda, that is, Rigvedis prefer this term hotr (होतृ / ಹೋತೃ / hōtr̥). This is because it represents the Lord Agni Deva himself present in the ritvik (Ritvijam / Ritvija).

If we want to tell in adhyatmic (spiritual) words, this divine act refers to the offering of sense objects into the agni (fire) of senses and done and this is completely accepted and consumed by Lord Vishnu himself.

Lord Vishnu is known as the yajnesha or yagneshwara etc. This is because he is the ultimate Supreme Personality, who accepts anything and everything which is given in devotion. Lord Vishnu is the Lord of all Sacrifice.

5. Ratnadhathamam (रत्नधातमम् / ರತ್ನಧಾತಮಮ್ / ratnadhātamam) : The Sanskrit word ‘Ratna’ is a synonym term for wealth. Lord Agni Deva (Depending of Lord Vishnu) gives wealth (prosperity) to the doer of yajna. 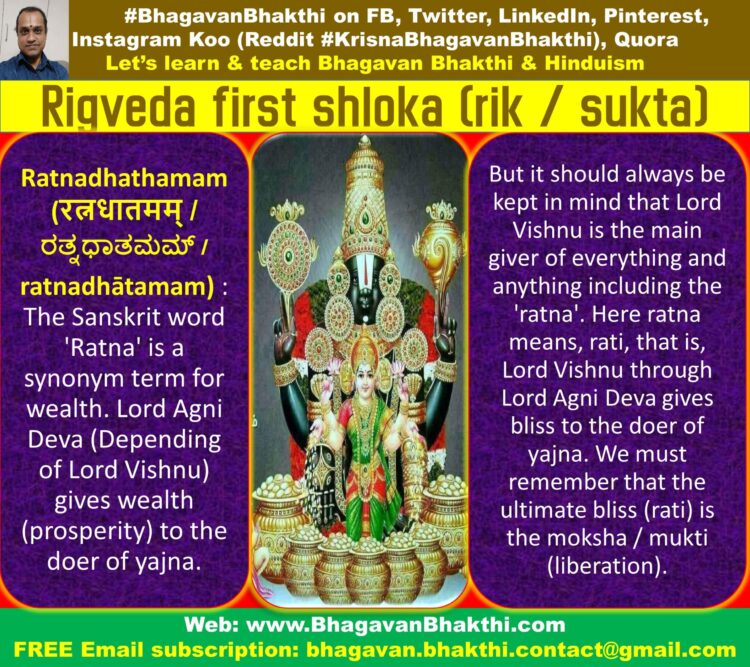 But it should always be kept in mind that Lord Vishnu is the main giver of everything and anything including the ‘ratna’. Here ratna means, rati, that is, Lord Vishnu through Lord Agni Deva gives bliss to the doer of yajna.

We must remember that the ultimate bliss (rati) is the moksha / mukti (liberation).

Thus, it is very much clear that, all the qualities eulogized by the attributes in this first shloka (rik) are found in enormous quantity in Lord Vishnu.

Sometimes when certain meanings are considered, such attribute is present only in Lord Vishnu and no one else will be possessing that (those) quality (qualities).

Thus all the shlokas (sukta or rik) of the divine Rigveda is very much Lord Vishnu oriented first and foremost including the above first shloka (sukta or rik).

Now, let us know the following:

Who is Lord Agni Deva?

1. Meaning of Agni : Agni means, he is someone who is worshiped first and most. (But the grand first, that is, प्रपितामह / ಪ್ರಪಿತಾಮಹ / prapitāmaha – The ‘aadi beeja’ or ‘aadi deva’ is Lord Vishnu. Lord Agni Deva is completely dependent on Lord Vishnu). 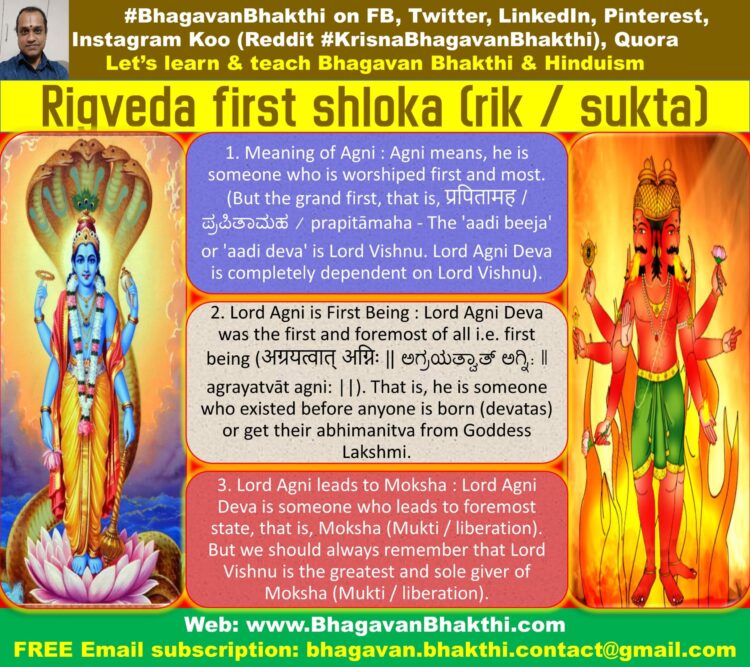 2. Lord Agni is First Being : Lord Agni Deva was the first and foremost of all i.e. first being (अग्रयत्वात् अग्निः || ಅಗ್ರಯತ್ವಾತ್ ಅಗ್ನಿ: || agrayatvāt agni: ||). That is, he is someone who existed before anyone is born (devatas) or get their abhimanitva from Goddess Lakshmi. 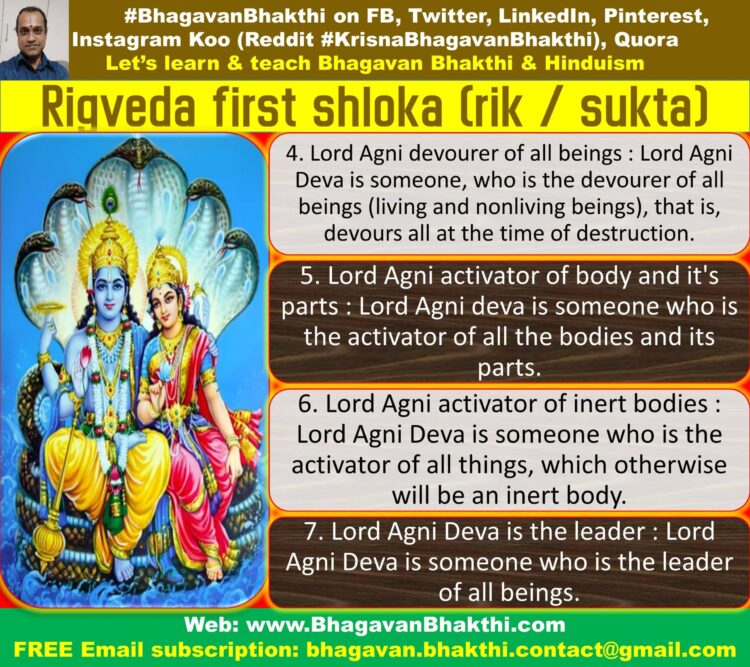 But the original ‘Leader’ is Lord Vishnu.

PS : Here also all the qualities and characteristics expounded by the word ‘Agni’ are present in great abundance in Lord Vishnu and sometimes only in Lord Vishnu.

Thus it should always be remembered that ‘Agni’ in no doubt is primarily the name of Lord Vishnu. Lord Vishnu is the doer of anything and everything.

Hinduism speaks about monotheism and not polytheism. Lord Vishnu is the only Ishwar (God) in Hinduism and all others are his followers starting from Goddess Lakshmi, Lord Brahma, Goddess Sarasvati, Lord Shiva, Goddess Parvati, Lord Indra, Lord Surya, Lord Chandra etc. etc. etc. 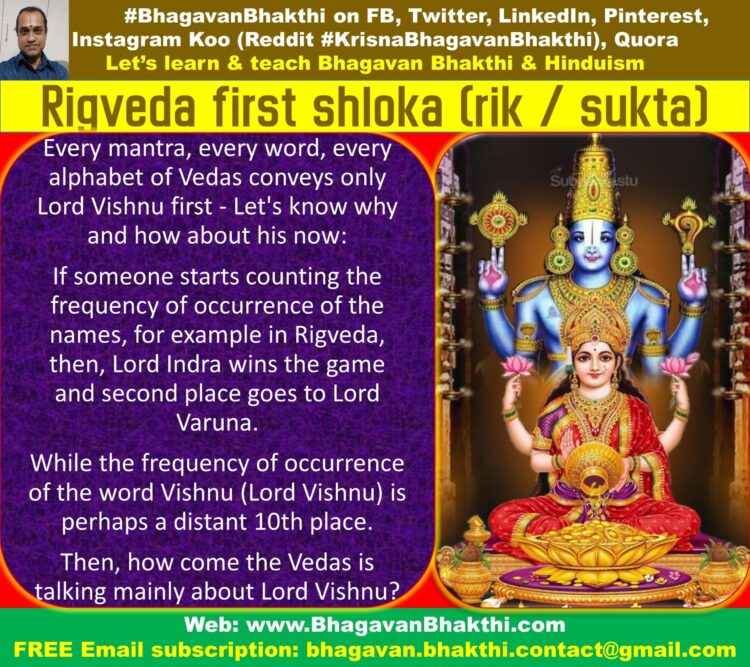 Every mantra, every word, every alphabet of Vedas conveys only Lord Vishnu first – Let’s know why and how about his now:

If someone starts counting the frequency of occurrence of the names, for example in Rigveda, then, Lord Indra wins the game and second place goes to Lord Varuna.

While the frequency of occurrence of the word Vishnu (Lord Vishnu) is perhaps a distant 10th place.

Then, how come the Vedas is talking mainly about Lord Vishnu?

Let’s know the inside meaning of this now…

Let us understand this by straight facts as per the great Vaishnava Saint Sri Madhvacharya Ji.

Sri Madhvacharya Ji has very much clarified the purport of every mantra, every word and every alphabet of all the Vedas is Lord Vishnu himself with ample examples and illustrations.

Few of those great examples with samples from the Great Vedas themselves are provided as given below:

The definition of the Vedas does not take statements or pieces of statements separately from its context.

But rather, it is a holistic approach, taking into account the context, proposition, epilogue, event, parables, iterations and logic as a whole.

The latter takes precedence, along with ambiguous and unambiguous statements. 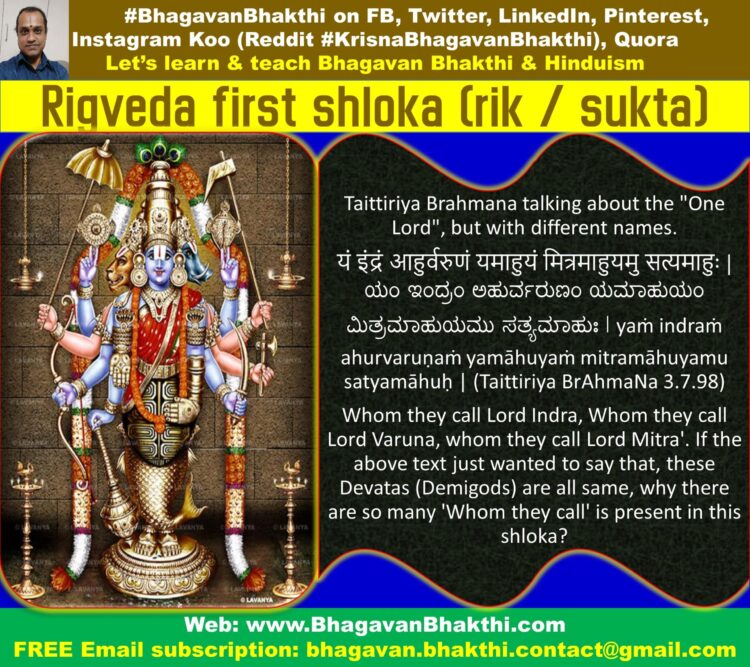 It is purely redundant. But instead, the repeated usage is to emphasize that, it is the same Supreme Personality who is called by all those names, and not different entity by each name. Thus that one entity is no one self than Lord Vishnu himself. 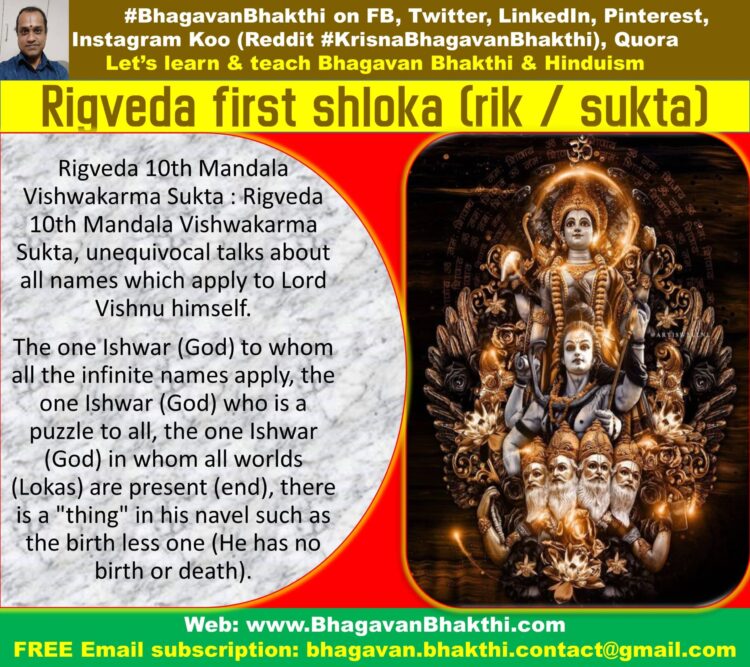 Padma Purana clarifies that, the thing in his navel of this birth less (some one who has no birth or death) one is nothing but the lotus.

Hence, in brief the above statement in 10th mandala of Rigveda tells us clearly that, all names used in Vedas primarily apply to Lord Vishnu himself and secondarily to other Devatas / Demigods.

Even the names like Lakshmi, Brahma, Rudra, Indra, Varuna, Agni etc. all describe only about Lord Vishnu first and then the others.

3. Name of Lord Vishnu : Nevertheless of the Great Vedas specifying different names with different meaning and actions, but it always proves and refers to certain extraordinary actions and qualities when dealing explicitly with the name of Lord Vishnu. 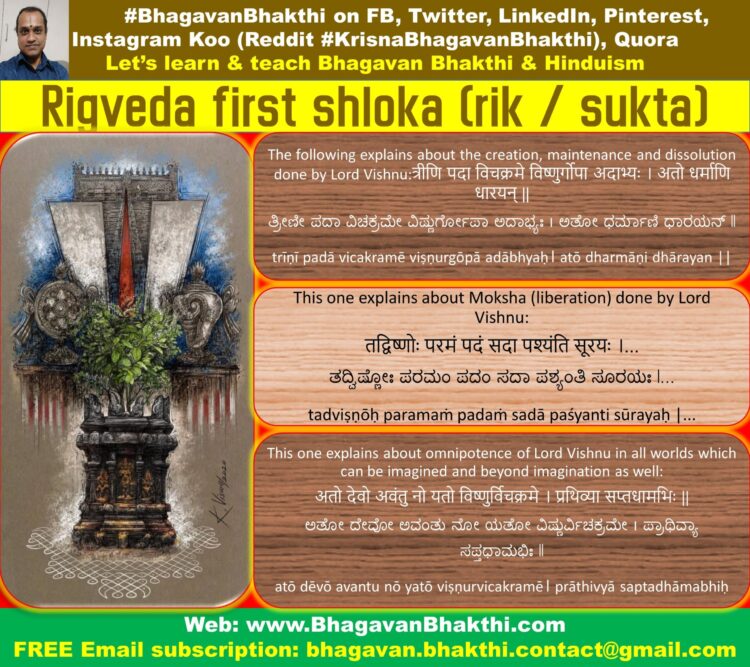 For example : The following explains about the creation, maintenance and dissolution done by Lord Vishnu:

This one explains about Moksha (liberation) done by Lord Vishnu:

This one explains about omnipotence of Lord Vishnu in all worlds which can be imagined and beyond imagination as well: 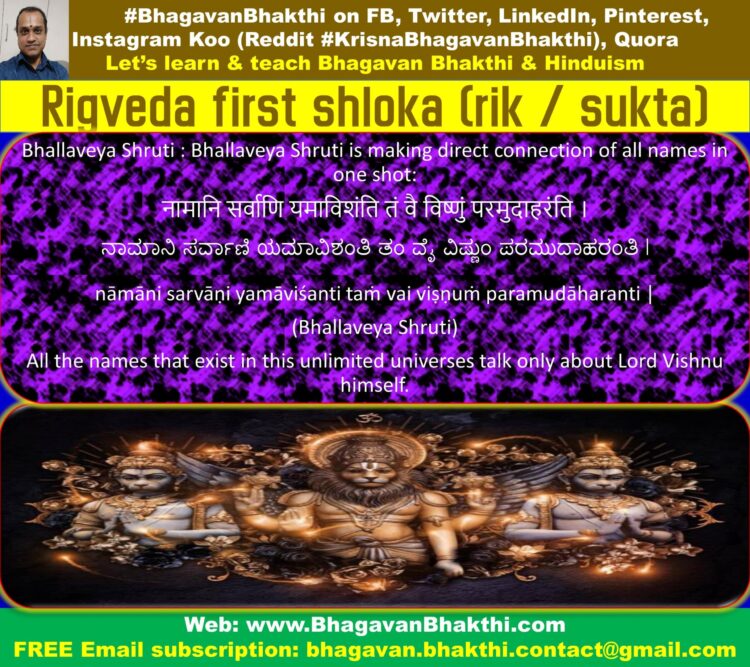 All the names that exist in this unlimited universes talk only about Lord Vishnu himself.

5. Aitareya Upanishad : The divine ‘Aitareya Upanishad’ hints about that one Supreme Personality whose names contain ष / ಷ / ṣa and ण / ಣ / ṇa pervades everywhere by being indweller of all and is the strength. 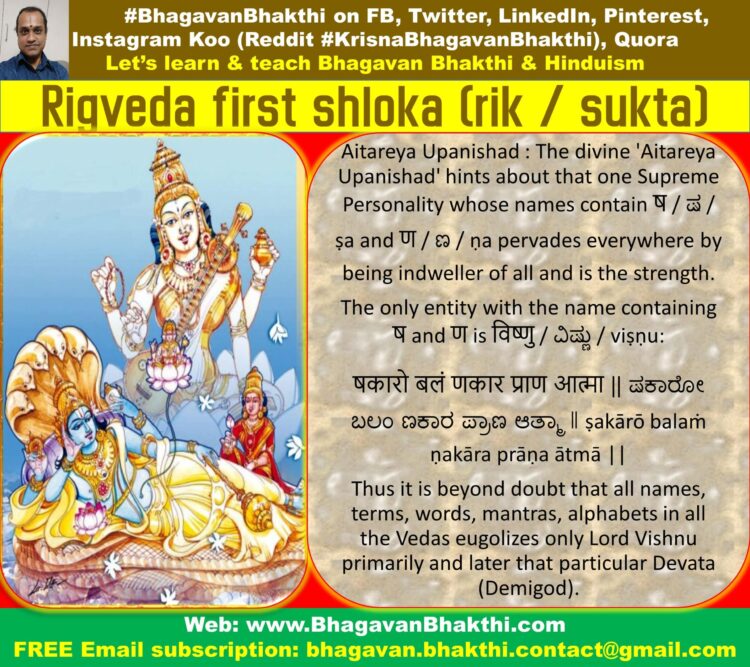 Thus it is beyond doubt that all names, terms, words, mantras, alphabets in all the Vedas eugolizes only Lord Vishnu primarily and later that particular Devata (Demigod).

Hence Sri Madhvacharya Ji declares without any second thought in his Brahmasutra Bhashya like given below:

To know about “What are Krishna Tulsi vivah (marriage) amazing facts”, click the below link:

To receive FREE EMAIL SUBSCRIPTION about #BhagavanBhakthi, you can send an email to [email protected] from your email ID.