List of Pandavas and their wives and children (Upapandavas) names

Just before going to “List of Pandavas and their children (Upapandavas) names“, let us know a brief, basic and very important information. 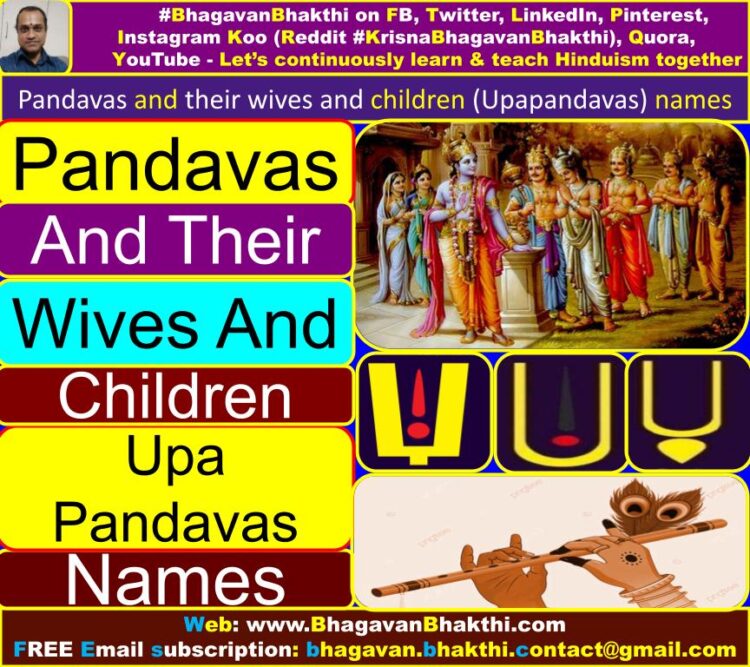 Those two lineages (Dynasty) names are as given below: 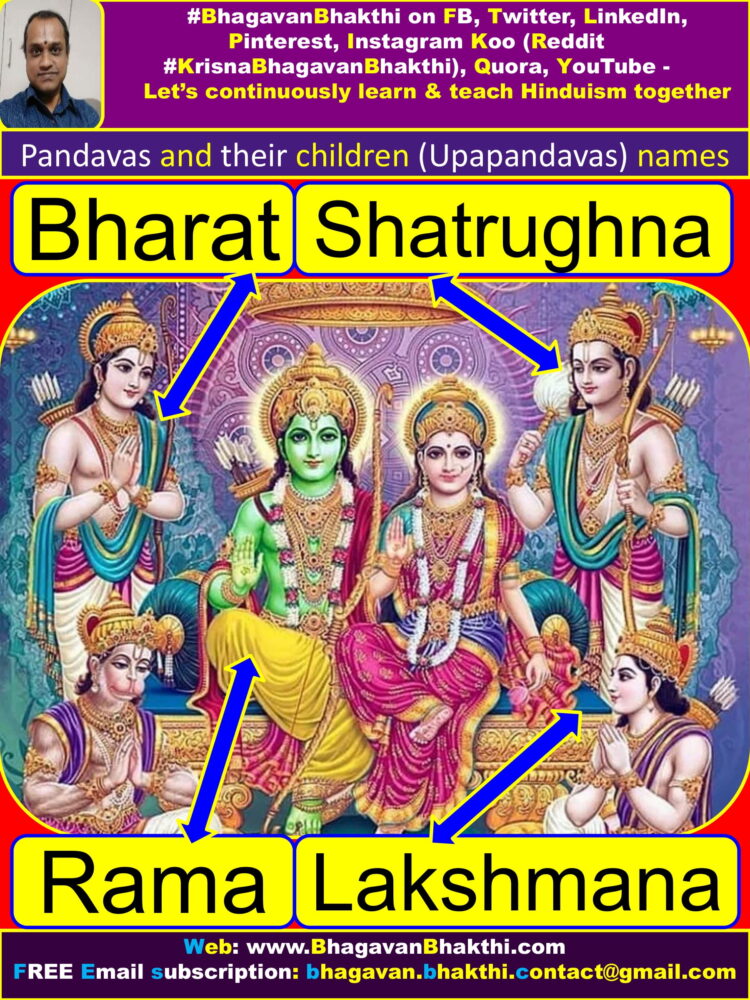 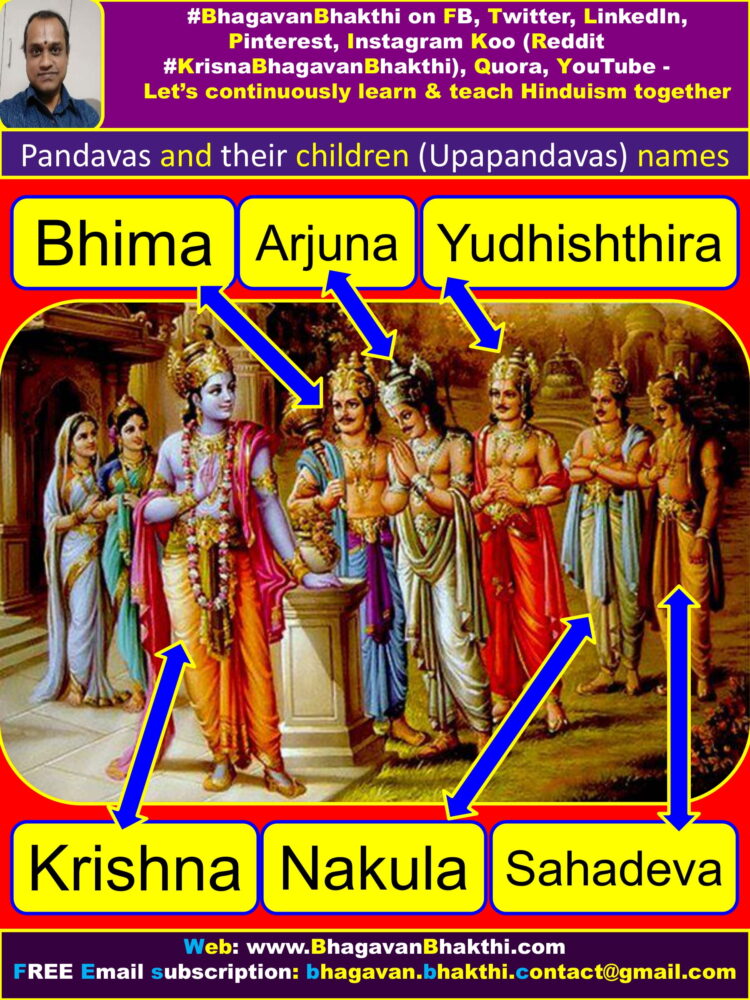 Among these said two above mentioned lineages (Dynasty), both starts from Lord Sri Vishnu and then later from his son from Lord Sri Brahma Deva.

Below let us know the great Pandavas and their children (Upapandavas) names. 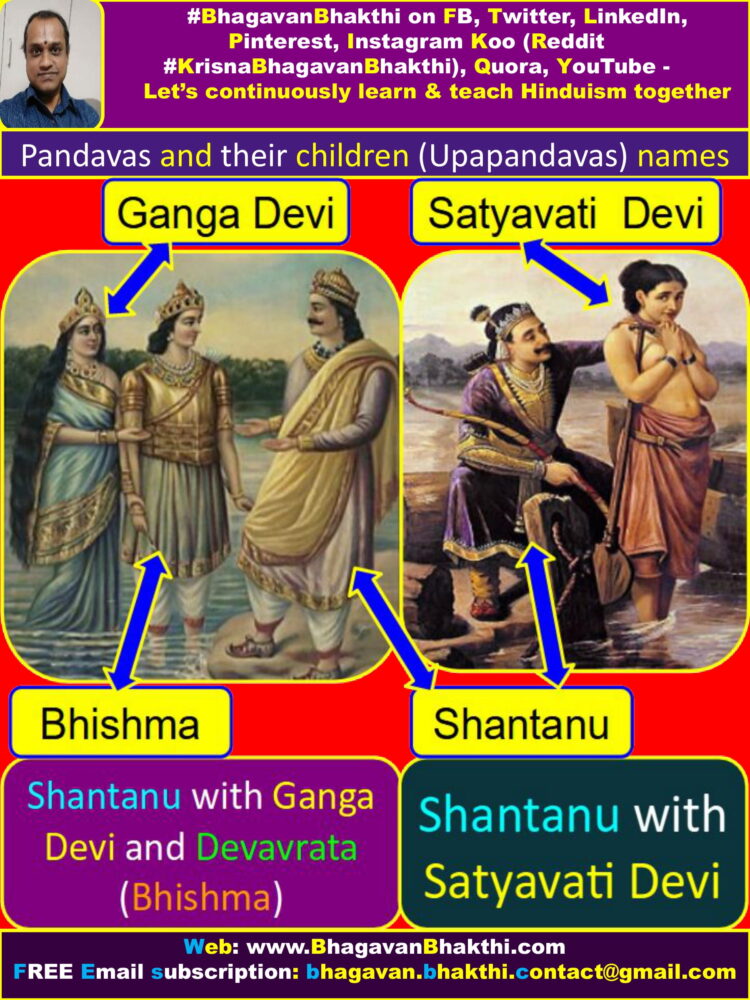 Vichitravirya : He is the son of Santanu (Shantanu) and Satyavati Devi. Vichitravirya wives consorts names are Ambalika and Ambika.

Vichitravirya with Ambalika give birth to Pandu, whereas with Ambika, Dhritarashtra is born.

Dhritarashtra : He is the son of Vichitravirya and Ambika. His consort name is Gandhari Devi and also had a relationship with a prostitute lady. 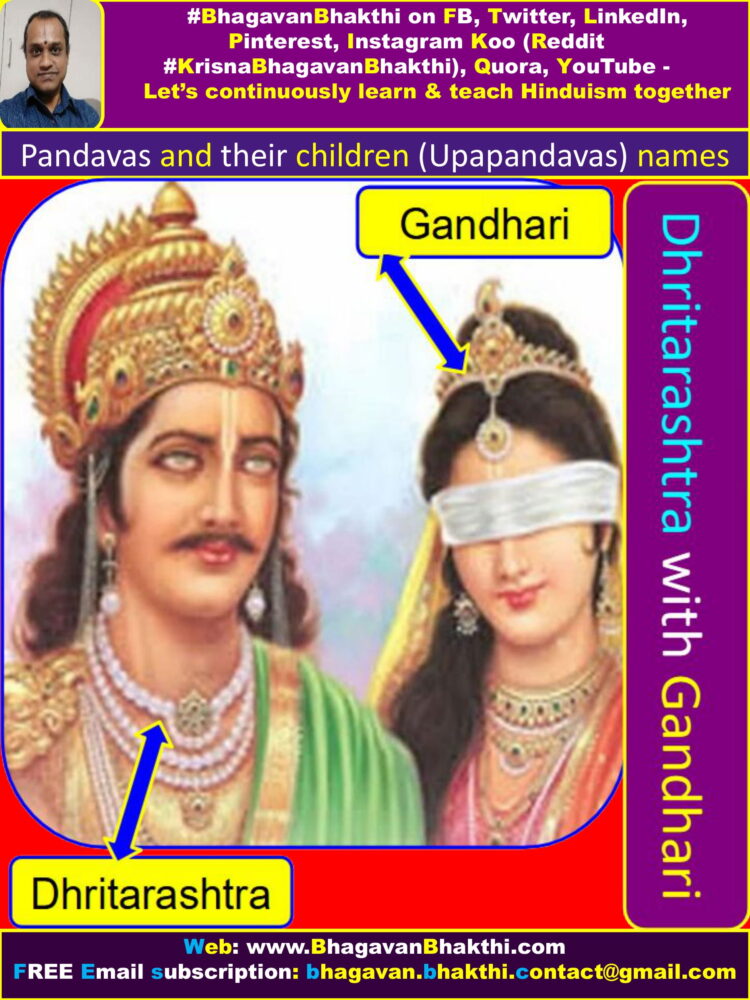 Dhritarashtra and Gandhari Devi had 100 sons and one daughter Dushala.

Prominent among these 100 sons are Duryodhana and Dushasana.

Duryodhana wife name is Bhanumati, a Kalinga Princess and their children are Lakshmana Kumara, Lakshmanaa, Kalaketu and Lakshmi. 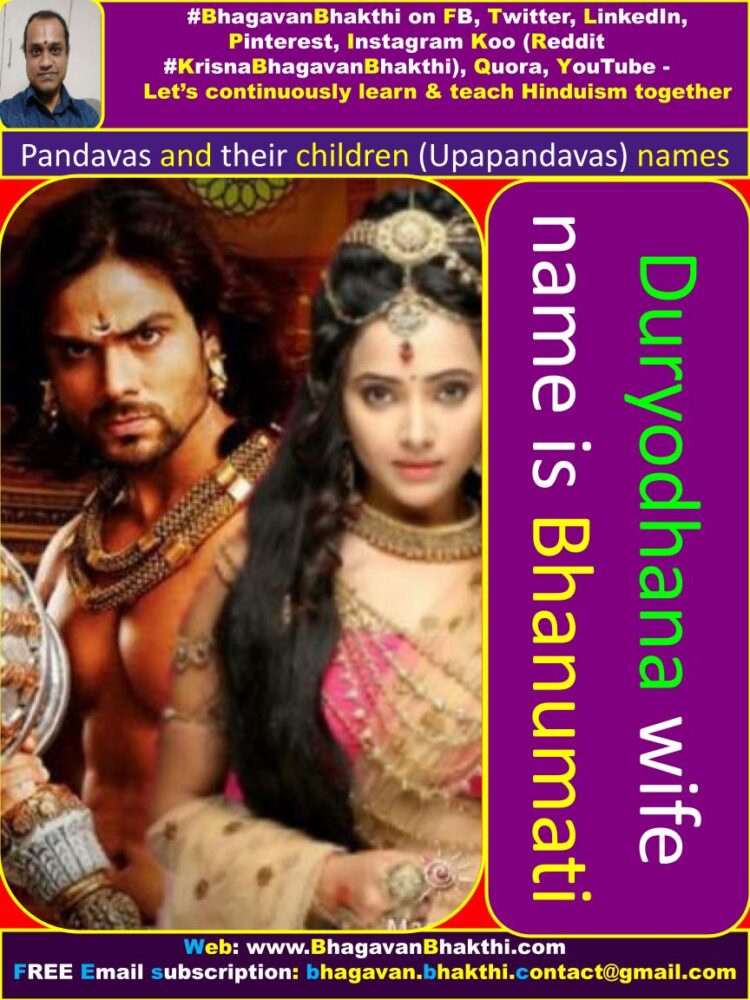 Pandu (King) : He is the son of Vichitravirya and Ambalika. Pandu had two consorts and their names are Kunti Devi and Madri Devi. 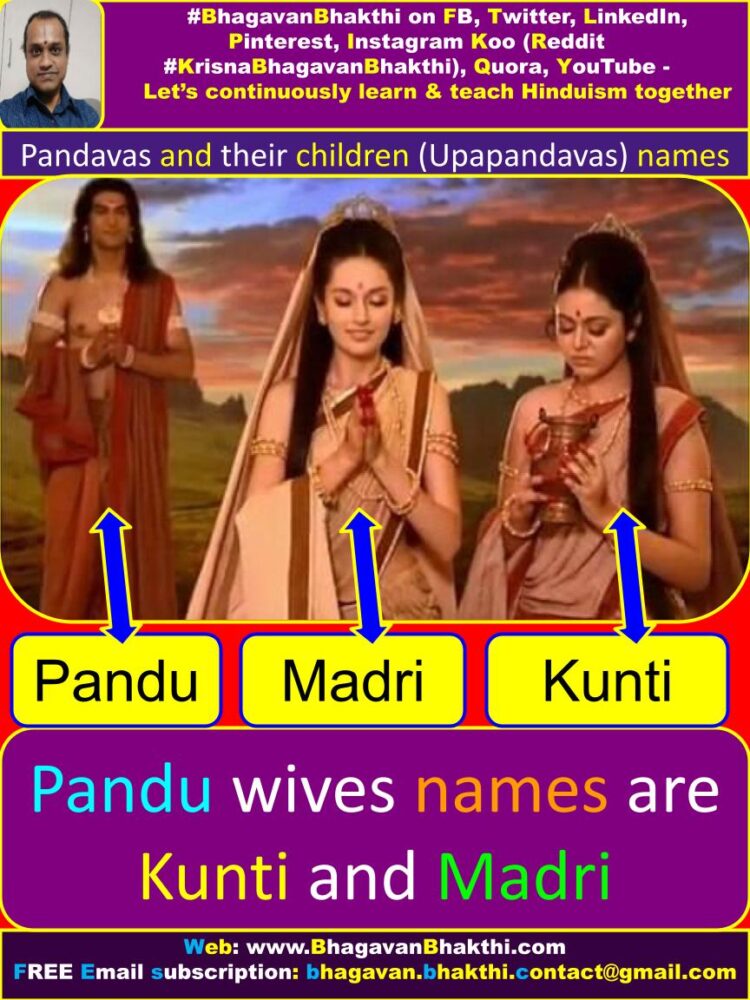 [Both Nakula and Sahadeva are the twin brothers and avatar of Lord Sri Ashvini Kumaras. In their origin form, they are called as Nasatya and Dasra.] 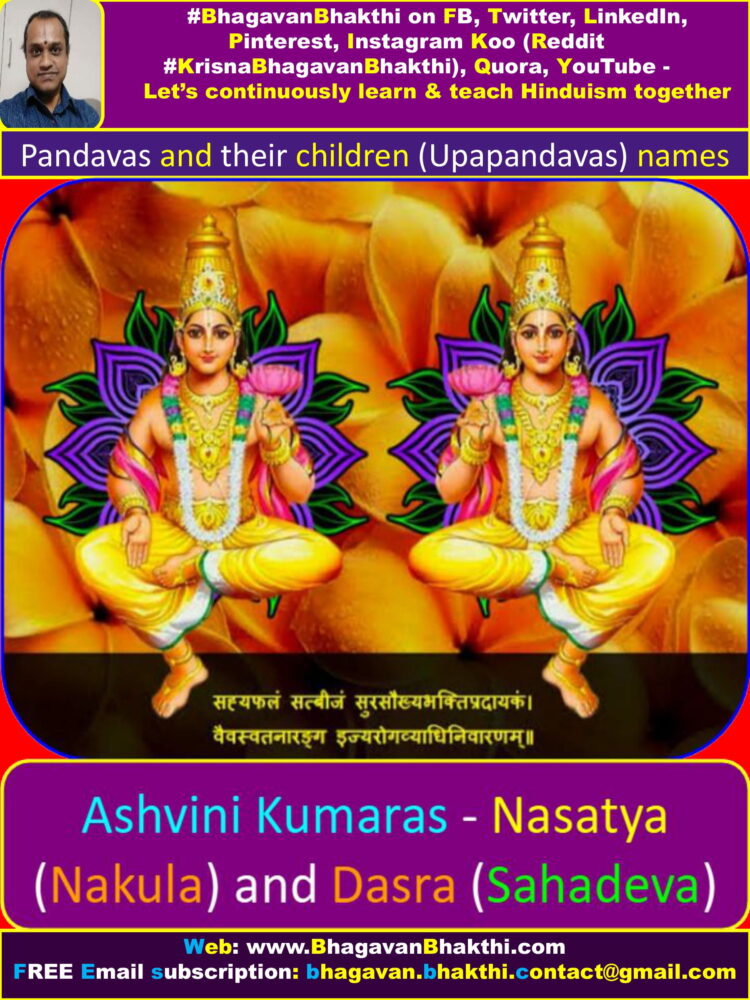 Pandavas names are as given below:

All these five Pandavas, that is, Yudhishthira, Bhima, Arjuna, Nakula and Sahedeva married the divine Sri Draupadi Devi. 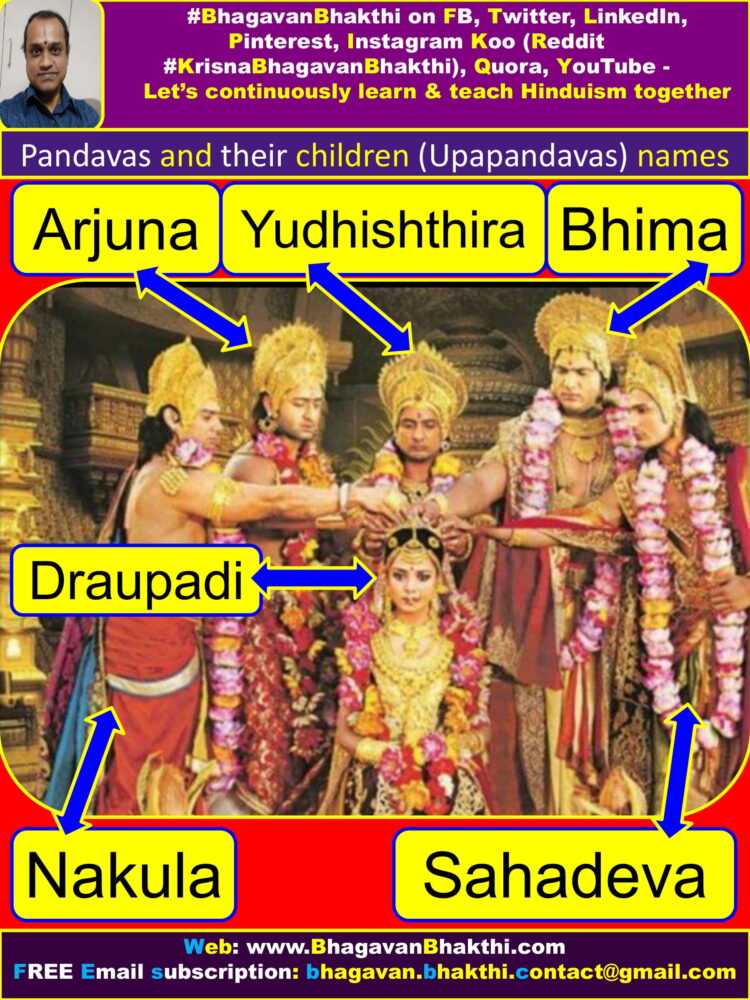 Pandavas sons (Upapandavas) names are as given below:

Yudhishthira and Sri Draupadi Devi had a son named Prativindhya (Shrutavindhya). They also had a daughter named Suthanu. 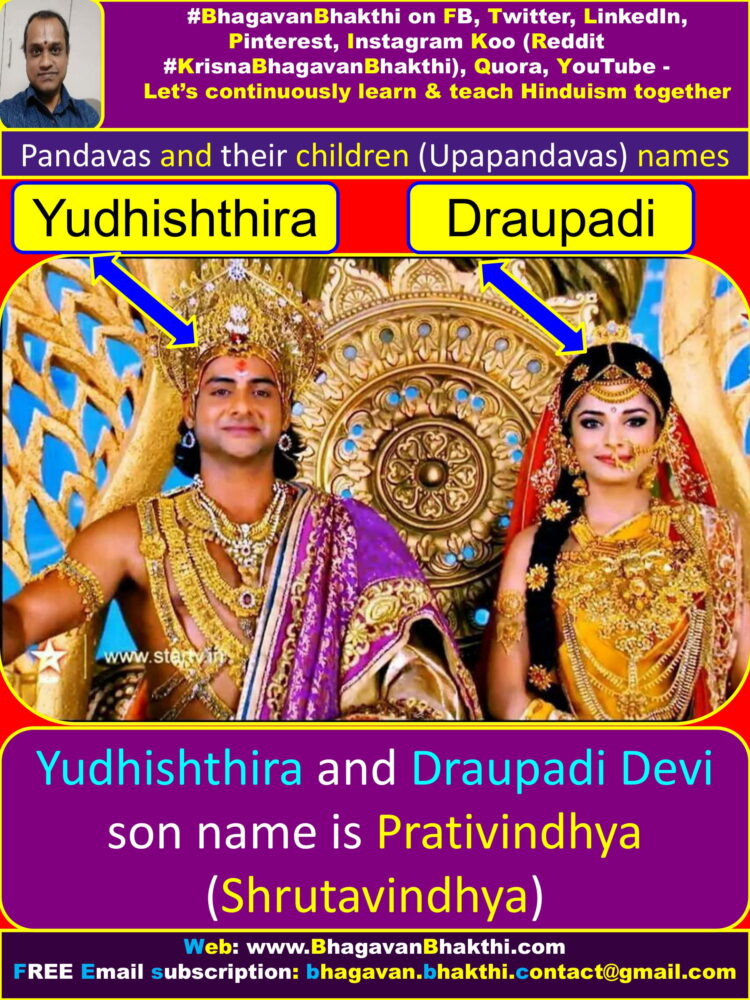 Bhima and Sri Draupadi Devi had a son named Sutasoma. 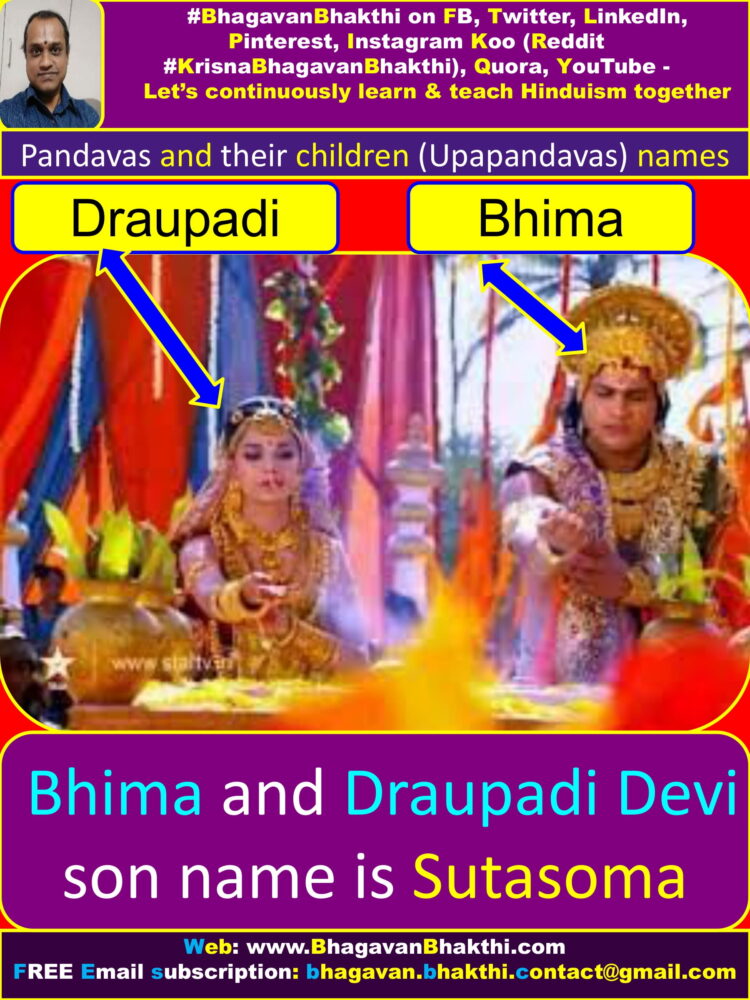 Arjuna and Sri Draupadi Devi had a son named Shrutakarma. 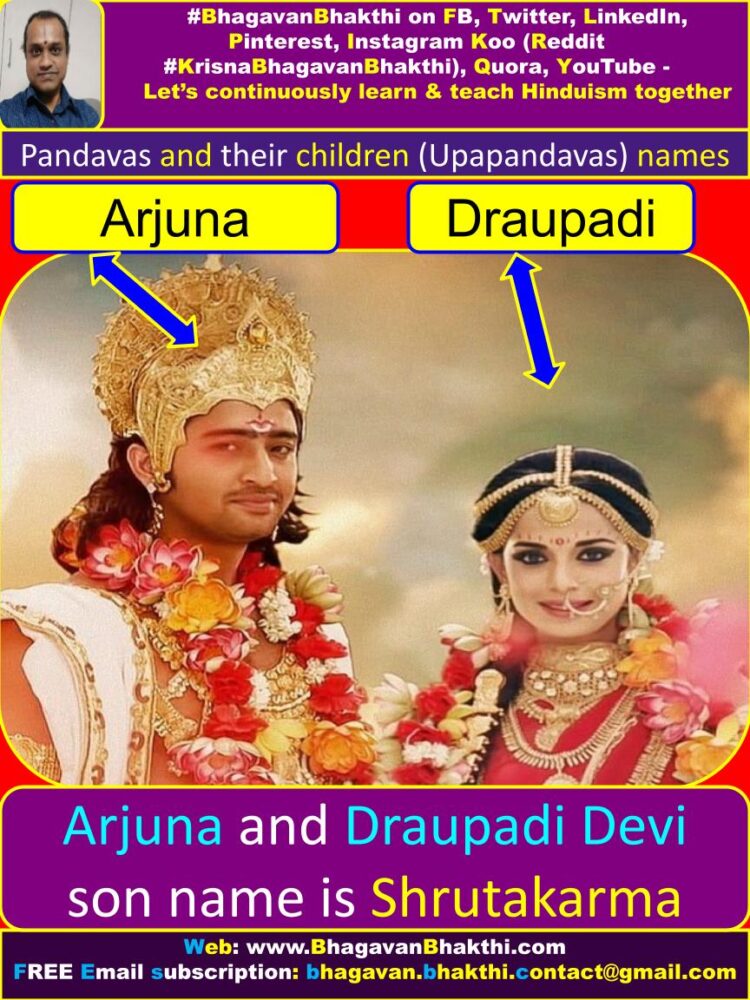 Nakula and Sri Draupadi Devi had a son named Shatanika. 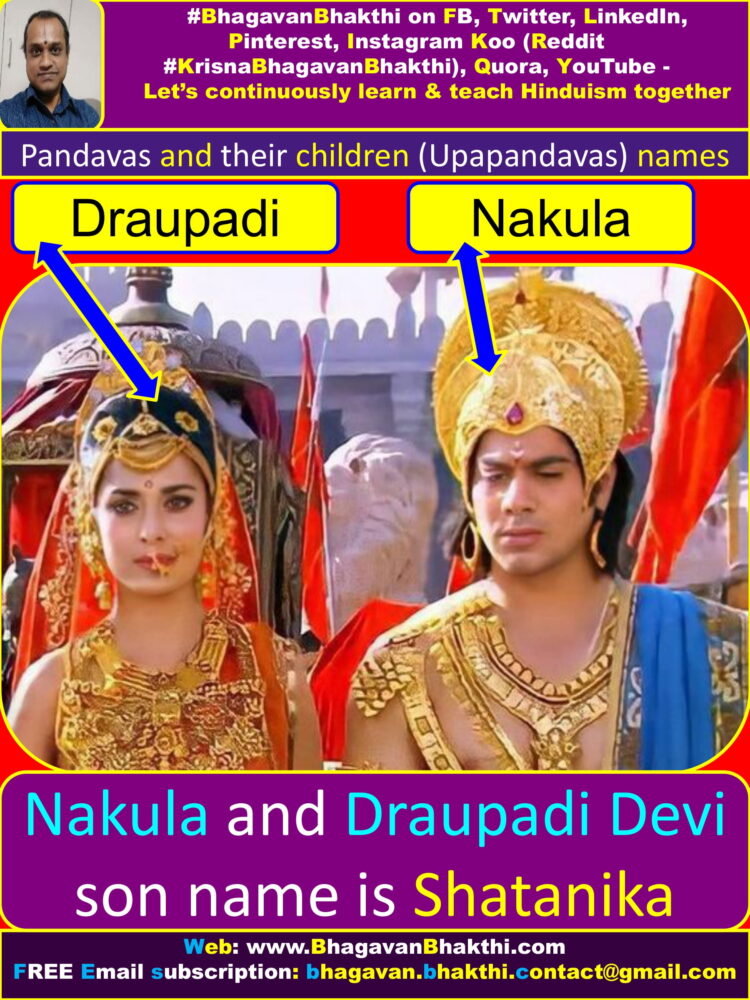 Sahadeva and Sri Draupadi Devi had a son named Shrutasena. 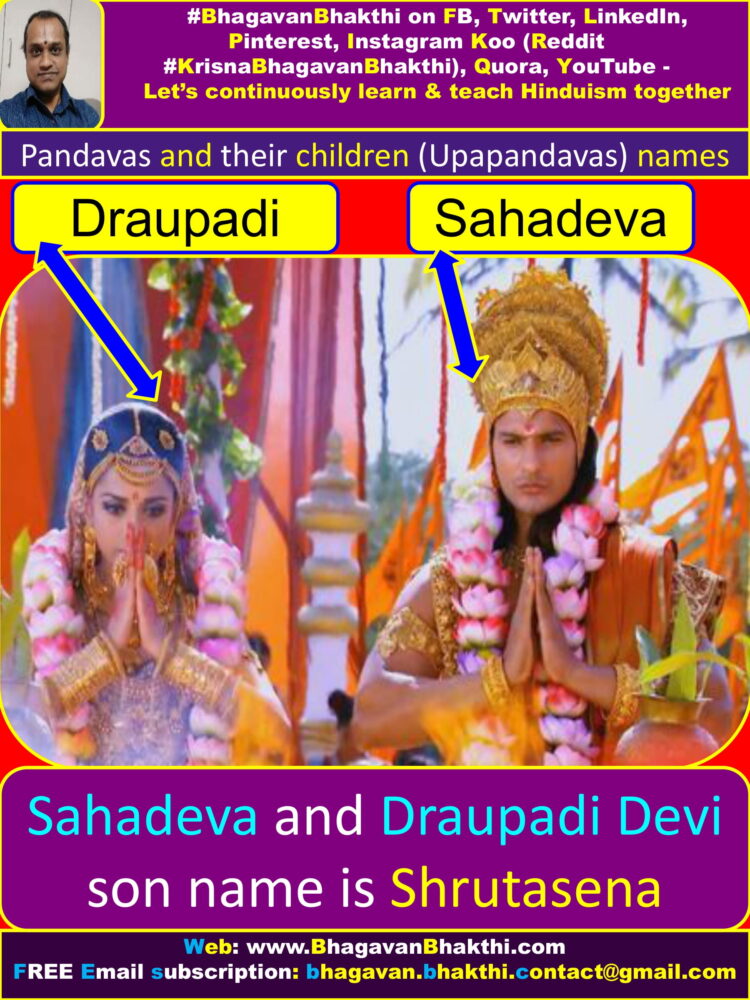 Yudhishthira also married another woman called Devika and their son name is Yaudheya.

Bhima with Hidimba (Hidimbi) had a son named Ghatotkacha. 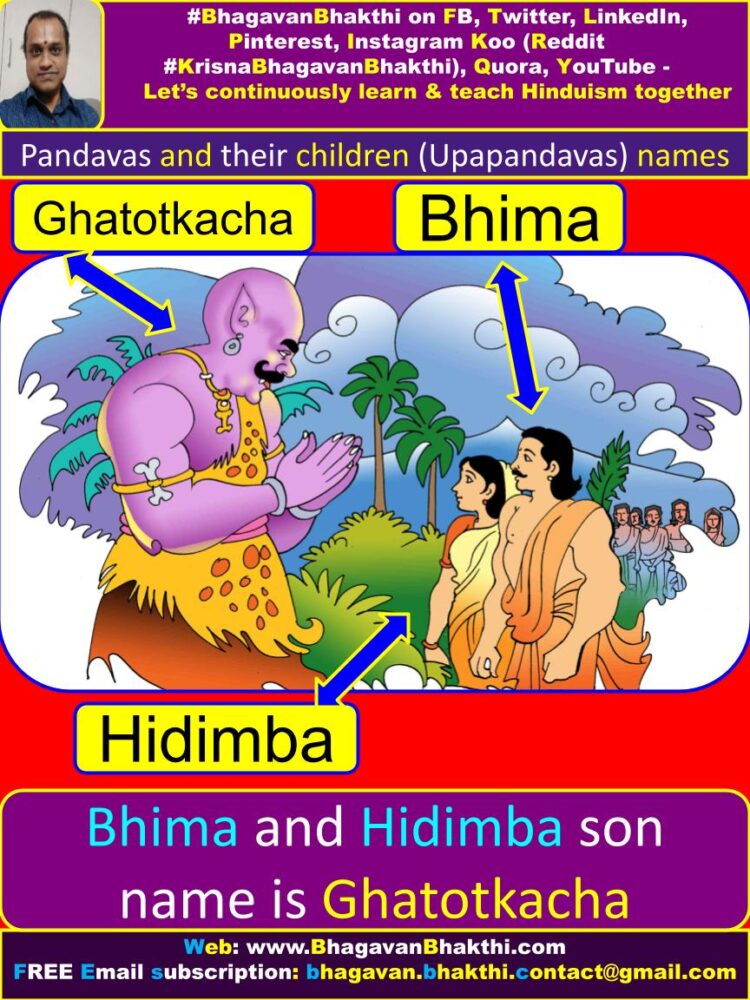 Bhima with Valandhara had a son named Sarvaga. Sarvaga became the King of Kashi after Kurukshetra war. 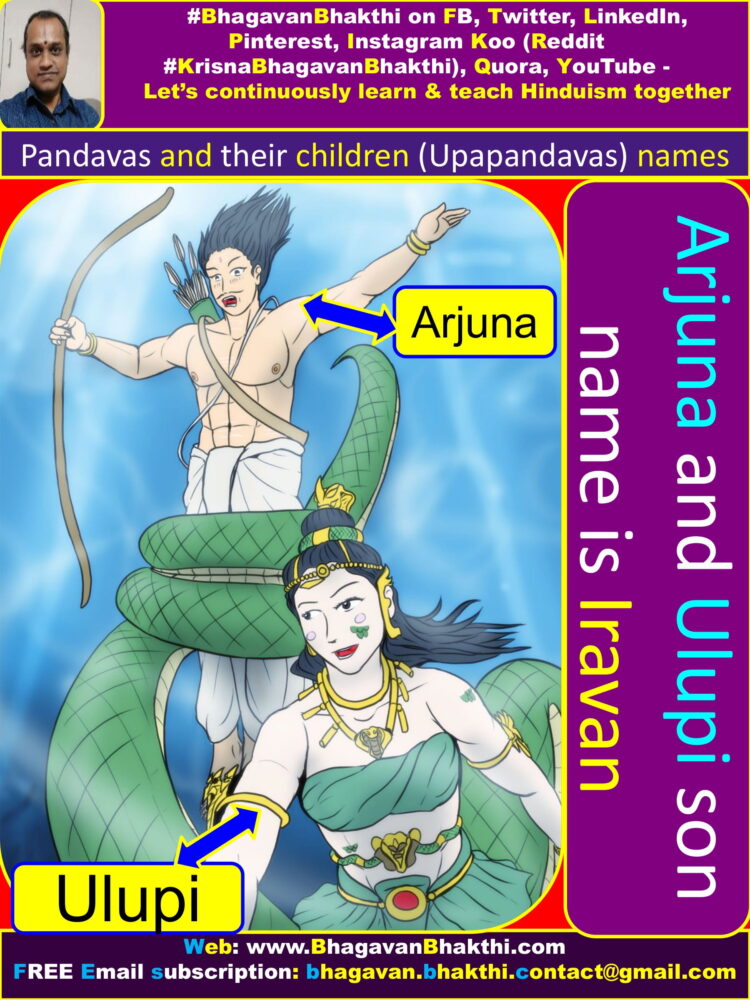 Arjuna and Chitrangada gave birth to a son named Babruvahana.

(Goddess Sri Sachi Devi is the consort of Lord Sri Indra Deva and Jayanta is their son.) 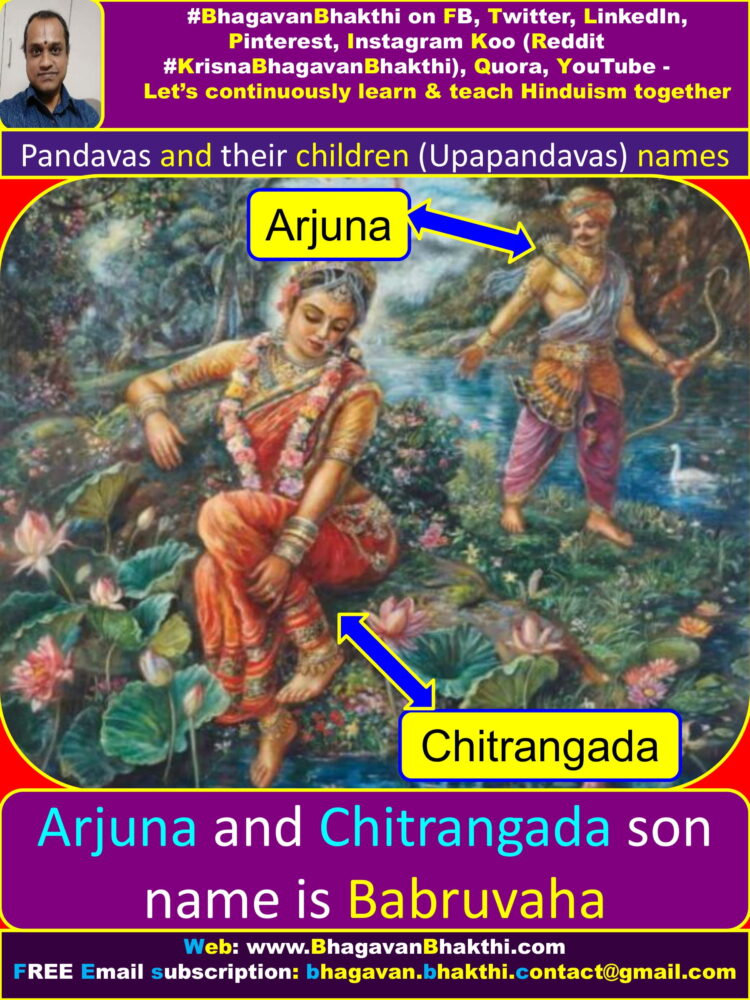 (Subhadra was Trijata in her earlier birth during Ramayana. Trijata is the one who will be serving Goddess Sri Sita Devi during her stay in Lanka in Ashoka Vatika.)

(Trijata is the daughter of Vibhishana, the youngest brother of King of Lanka Ravana.) 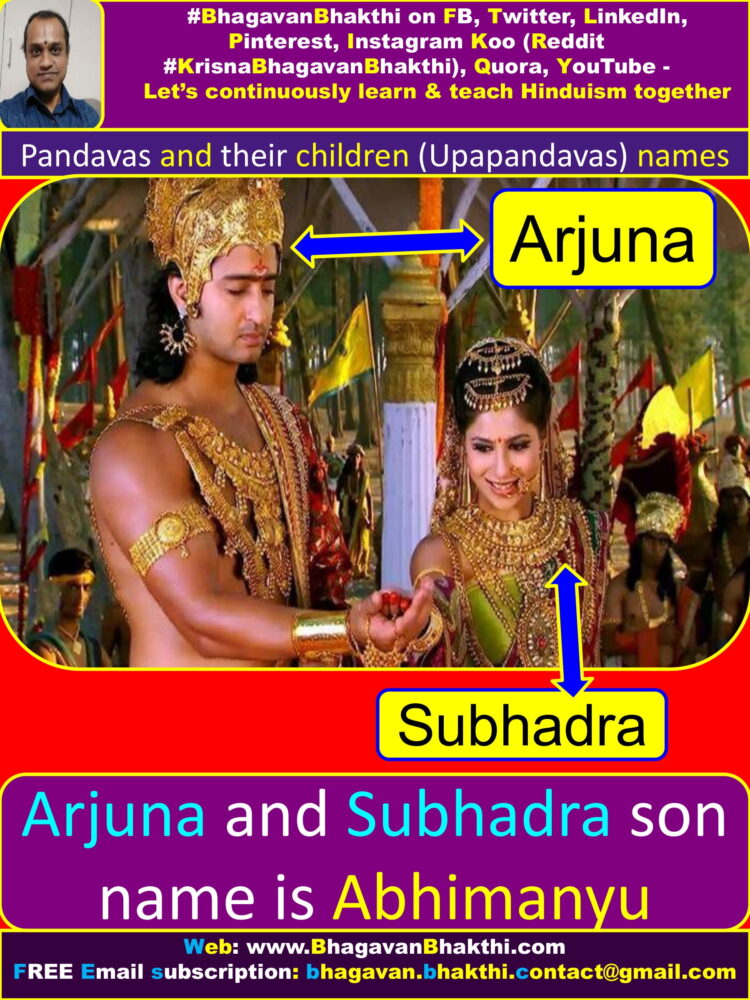 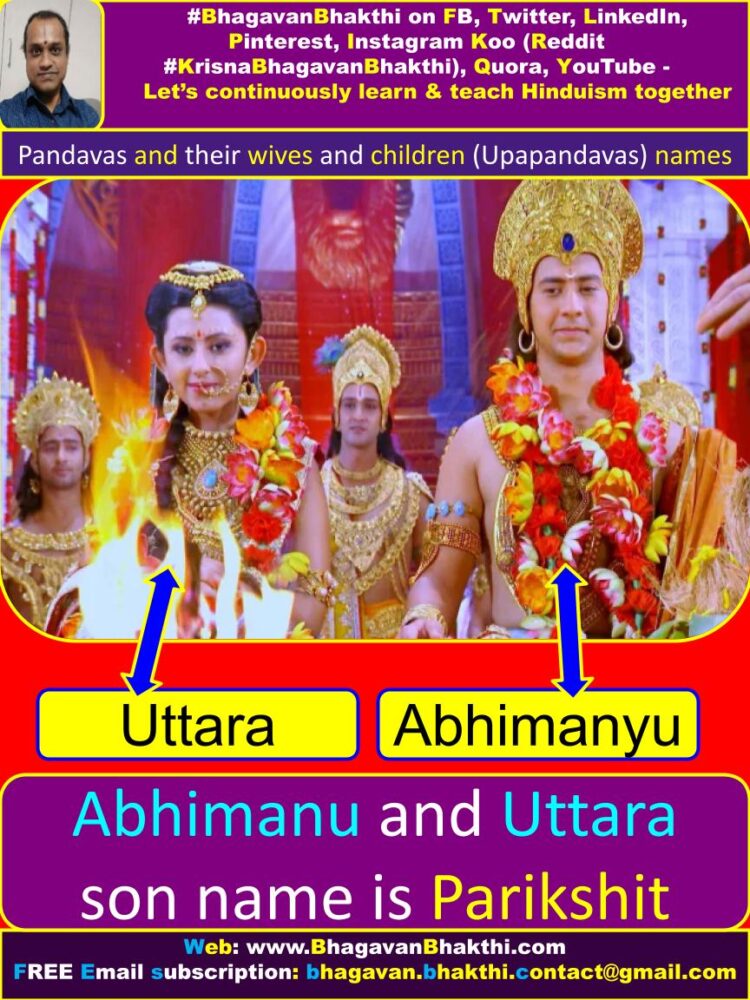 Parikshita (Parikshit) : He is the son of Arjuna and Subhadra Devi. Parikshit consort name is Madravati.

[Parikshit is the one for whom the divine Srimad Bhagavatam was preached by Shuka Muni (Shukacharya Ji).] 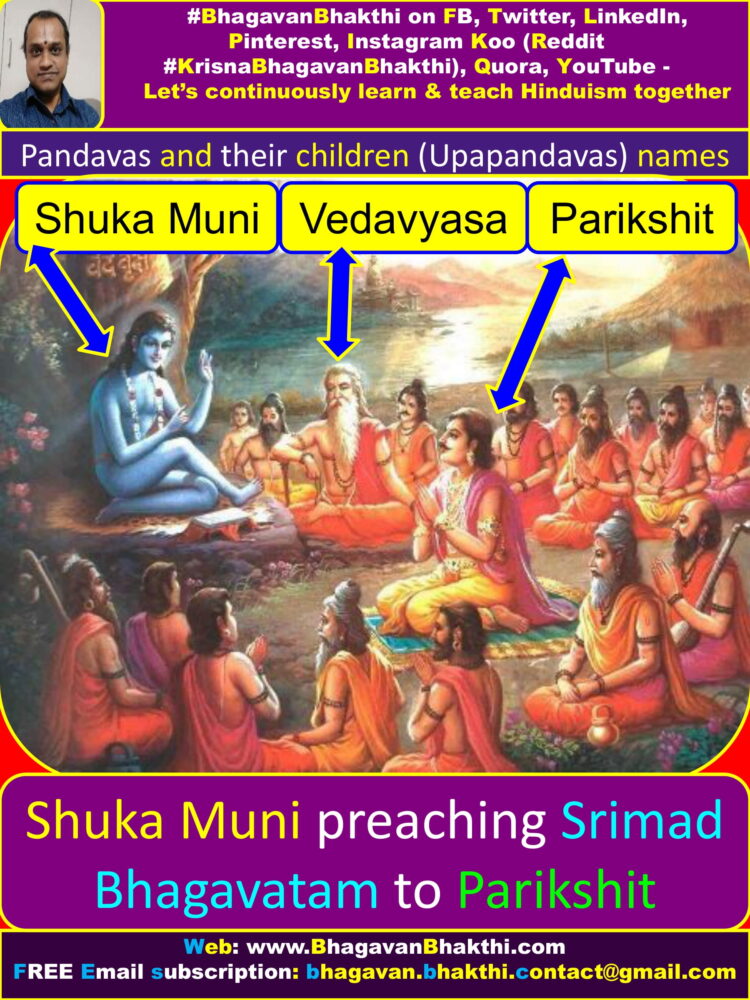 [Shuka Muni (Shukacharya Ji) is an avatar of Lord Shiva.]

More information will be added to this on regular basis. Please visit this post after some time to get updated information.

To know more about “Pandavas information (facts)“, please click the below link: