Are all Demons (Rakshas) are bad and all Brahmins are good in Hinduism? - Bhagavan Bhakthi (Hinduism)
Skip to content
03/12/201901/12/2021 By Vijay Kumar S Khatokar BharatiyaNo Comments

Are all Demons (Rakshas) are bad and all Brahmins are good in Hinduism?

Namaste friends, how are you doing today. Bhagavan Sri Vishnu blessings to you and your family!

First let us understand from where does the Rakshasas / Daityas etc. came from.

Let us understand with few examples as below:

First we should remember that all the adhama jeevas / unlawful people are bad, whether he is born in Brahmana varna or in Kshatriya varna or in Vaishya varna or in Shudra varna or in any form, he / she is / are definitely bad people. 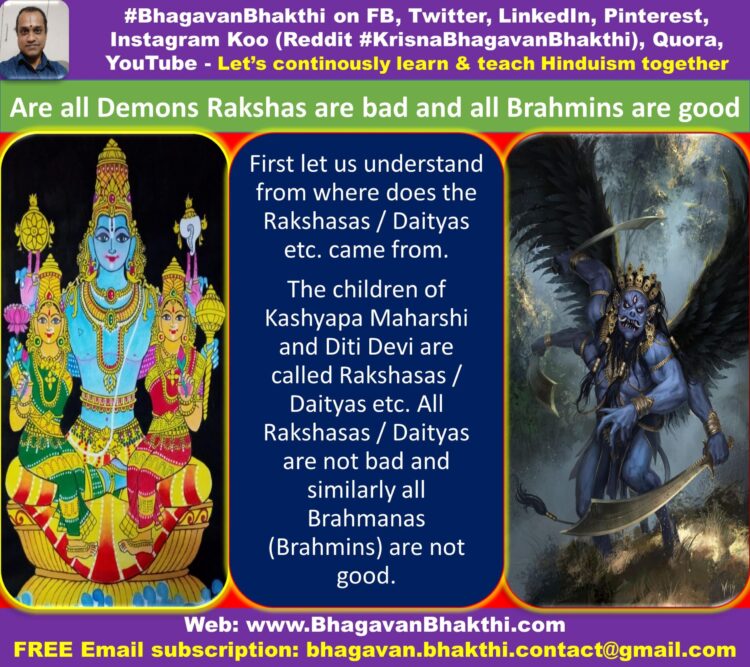 Similarly all the Dharmika jeevas / lawful people are definitely good people irrespective of his / her varna, that is may be he / she is born in any form or in Shudra varna or in Vaishya varna or in Kshetriya varna or in Brahmana varna.

As said earlier all the children of Sri Kashyapa Maharshi and Diti Devi are called Rakshasas / Daityas.

This means all the children born to Sri Kashyapa Maharshi and Diti Devi are called Daityas / Rakshasas.

The word Daitya is derived from the word Diti.

Let us now understand the different forms of jeevas / people: 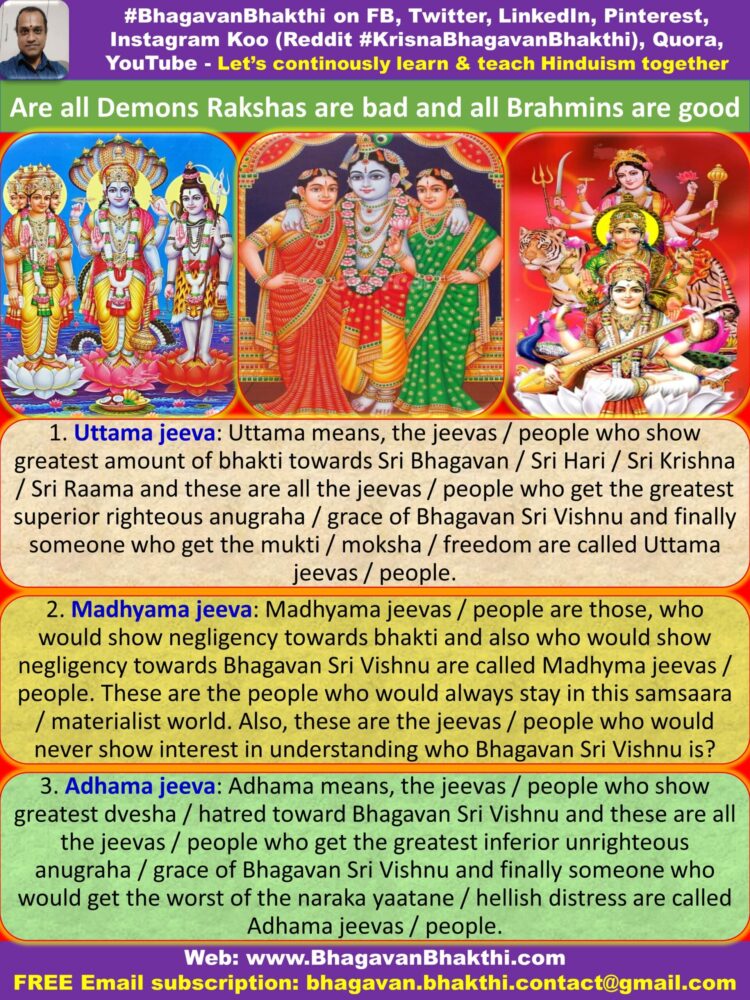 There are mainly three types of jeevas / people, that is:

These are the people who would always stay in this samsaara / materialist world.

Also, these are the jeevas / people who would never show interest in understanding who Bhagavan Sri Vishnu is?

But we may think, why Bhagavan Sri Vishnu has given birth to these three types of people.

We should always remember that Sri Hari is called “Karunanidhi” and also called “Karuna Sagara”. This means Sri Hari always wants us to develop / come up in our lives (I am not talking about the materialist expectations).

But we will get our anugraha / grace as per our earlier Karmas (our earlier lives Karma and also the present life Karma). 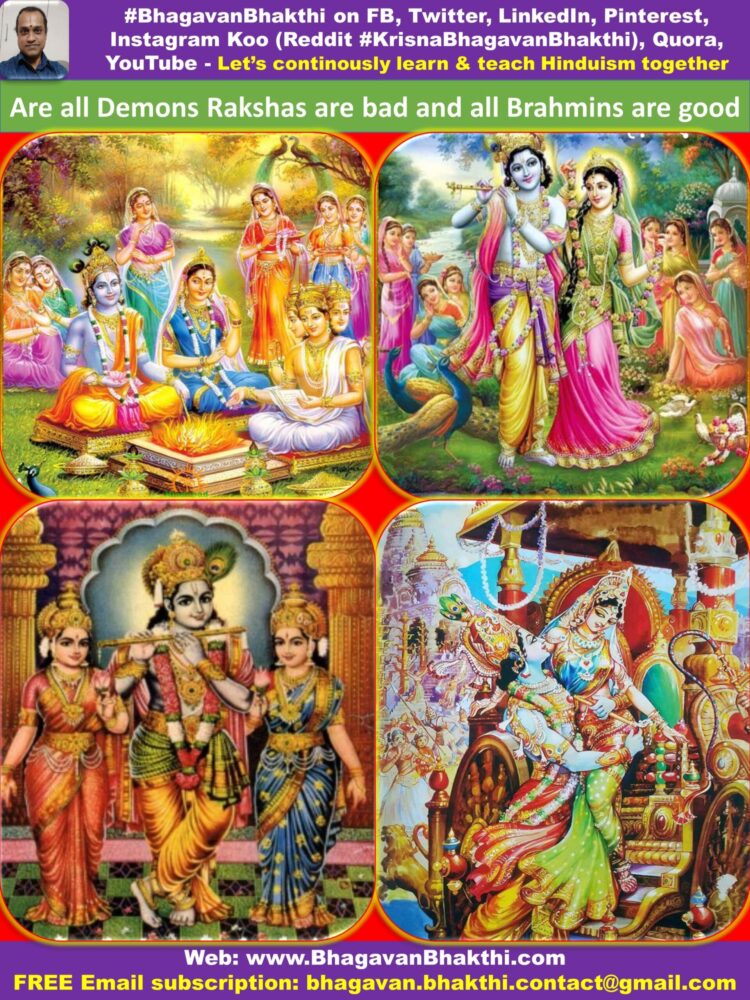 To understand what is Karma, let us take a simple but a very thoughtful example:

If a child who is going to a school has studied through out the whole year, that is everyday this child would study with great interest and would understand almost all the content of the subject or subjects, then this child would definitely get good marks in his / her examination.

Similarly if a child has studied to some extent, he / she has understood only part of the subject or subjects means, this child would get marks, but not very good marks.

Also, finally if a child has not at all studied means, this child would get failed in the examination.

Thus we can understand that jeevas / people who show great amount of bhakti towards Sri Hari would get mukti / moksha / freedom.

And similarly, someone who shows dvesha / hatred toward Sri Hari would go the lower planets, that is to Narakas.

To express our bhakti, we / jeevas need satva guna. Negligence would lead us to rajo guna. Similarly, the dvesha / hatred would take us to the tamo guna.

Uttama jeeva / people according to his / her Karma can take birth in the vamsha / family of daityas / rakshasas. For example we know the greatness of Sri Prahalaada Raaja, Sri Balichakravarti etc.

Similarly the Adhama jeeva / people can take birth in a great vamsha / family.

Duryodhan & his brothers and King Vena were kruri / cruel in their behavior itself, that is their svabhava / nature itself is tamasa.

Similarly in this Kaliyuga, in the Brahmana vamsha / family itself, tamasa guna / quality jeevas can also take birth. 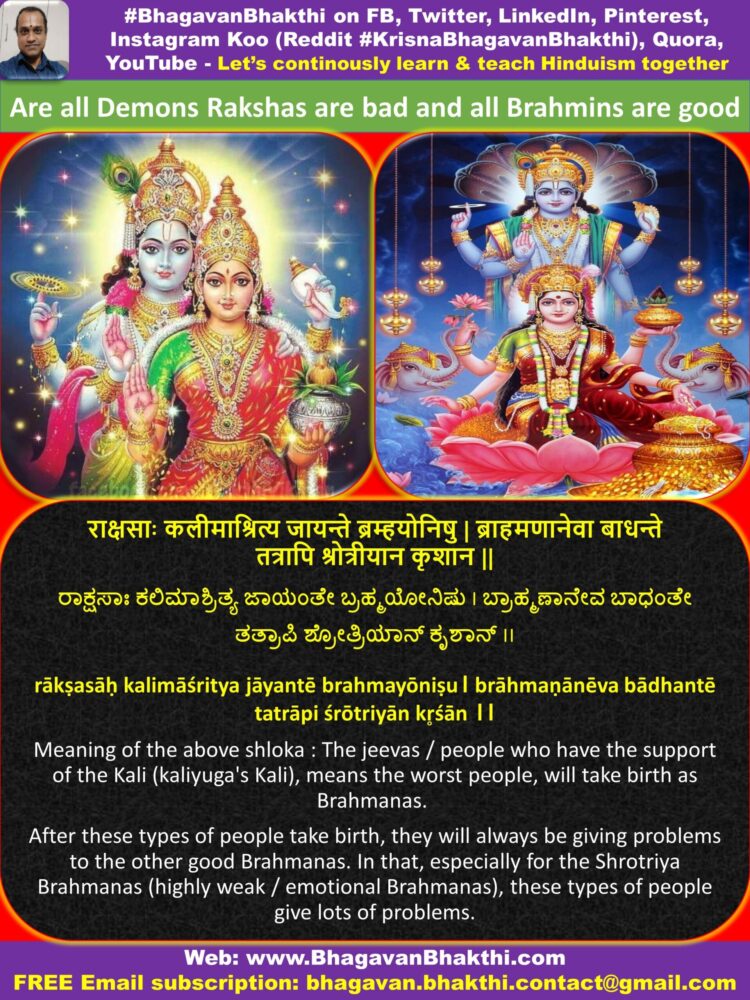 In our Great Shastras there is a saying which goes like this:

Meaning of the above shloka : The jeevas / people who have the support of the Kali (kaliyuga’s Kali), means the worst people, will take birth as Brahmanas.

Let us assume an example to understand this:

During the Great Mahabharata period, there used to be a Rakshasa / Daitya called Jatasura.

He was a Brahmana and had a very long jataa (someone who has long hairs on the head) and was causing problems to the people and Brahmanas who used to come for yaatre / pilgrimage.

Not only he used to cause problems to the good Brahmanas and other people, but he was also killing them.

He also tried to kill the Great Pandavas, but he himself was killed in the hands of the Great Bhimasena.

Thus we should understand that being born as Brahmana, it doesn’t mean he / she is a good person.

Similarly if someone is born in the Rakshasa / Daitya vamsha / family doesn’t mean he / she has to be tamasa jeeva / person.

Even in Rakshasa / Daitya vamsha / family, there are lots of Bhagavad bhaktas (devotees of Sri Hari).

Brahmana, Kshatriya, Vaishya, Shudra, Daitya, Rakshasa, pishacha etc. all are having there own yonis.

Thus we should understand that all jeevas / people who are born in one particular varna are not Rakshasa / Daityas or not even Brahmanas. All depends on our previous and present Karma.