What is Dhanur masam and it’s significance

Each of the masam (month) of Hindu calendar is auspicious and is dedicated to perform one or more particular ceremonies, rituals, customs, practices, etc. 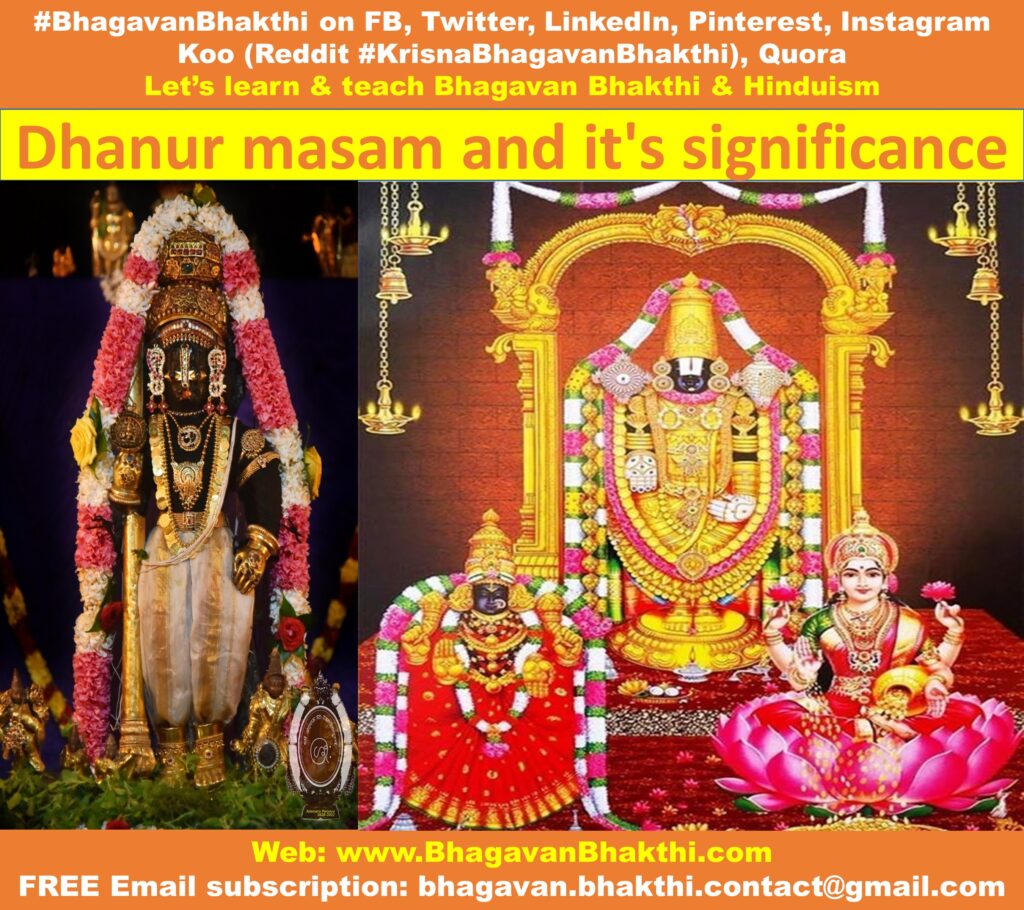 Most importantly the Hindu Sanatana Dharma include the ‘Chatur Puruṣārthas’ (Four Purusharthas) as given below:

The correct and required goals and / or aims of ‘manushya jaati’ (Human life) are:

4. Moksha / Mukti (Divine liberation). This means freedom from the cycle of deaths and births, that is, going to the most auspicious planet called Vaikuntha.

With these ‘Chatur Purusharthas), there are another two basic spiritual properties which are very important, that is, Karma (The actions performed or intent and its consequences) and Saṃsāra (cycle of deaths and births / reincarnation).

Hindu Sanatana Dharma divine practices include ceremonies and rituals like doing regular as pooja (worship) and to recite different stotrams as prescribed in Hindu grantas, to do japa, tapa, divine meditation (dhyāna of Bhagavan Sri Vishnu), to per all the festivals every year, and to have consistent pilgrimages through out India.

In Hindu Sanatana Dharma, we mainly find two types of ‘panchangas’ / calendars being followed, that is: 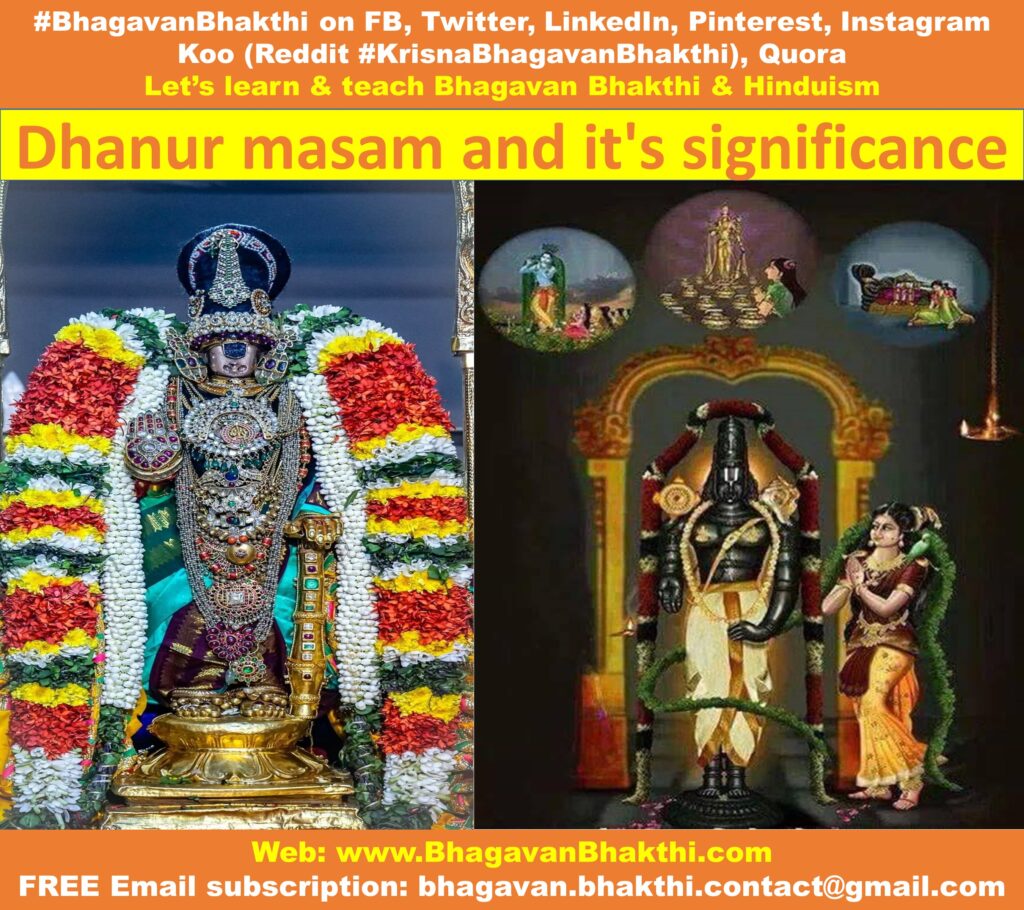 Whereas in Chandramana Panchanga / Lunar Calendar it is based on the Nakshatras / Constellations occurring on the ‘Poornima tithi’ (Full moon day).

The period between two successive Sankramana / Solar transits or the time taken by the Surya / Sun to pass through a zodiac sign is known as a Solar month.

This will mark the entry of Surya / Sun into Dhanus rashi and it is called as ‘Dhanus Sankramana’ (Transit of Dhanur Rashi). This generally occurs around the mid of the winter month of December as per Gregorian Calendar.

As per the Gregorian / English Calendar, Dhanur masam generally starts somewhere around on 16th of December and ends on January 13th or 14th on the Bhogi festival day.

It is the ninth month (Mārgaśirṣa / Agrahāyaṇa) of the zodiac starting from ‘Mesha Rashi’ (Aries) and is the last month before the onset of Uttarayana. 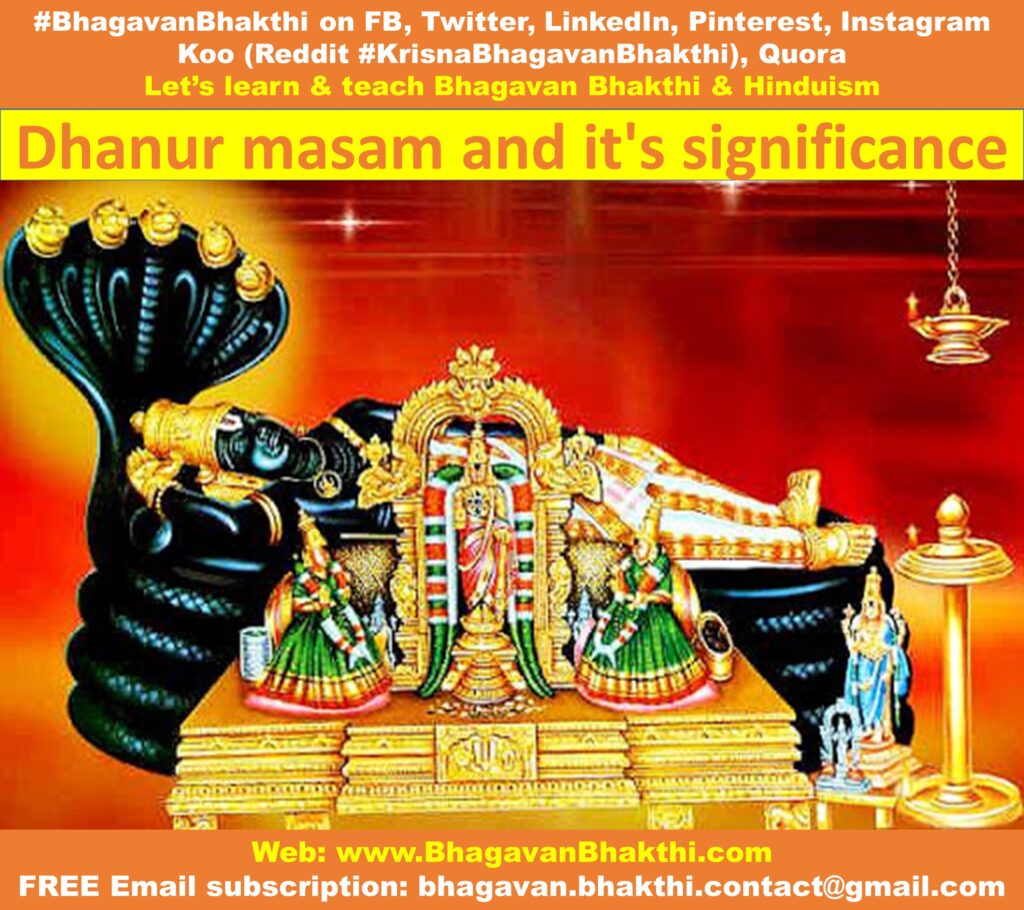 Lot more importance is given in worshipping Bhagavan Sri Vishnu in Dhanur masam during the early hours before Sunrise known as ‘Arunodaya Kaalam’.

In this month of Dhanur masam, one is expected to discharge ceremonies during the auspicious ‘Brahmi Muhurtam’, that is, approximately two hours before the Sunrise when the stars are still shining in the akasham / sky.

In the Dhanur masam a distinctive divine dish is prepared with Rice and Moong dal mixed in equal proportions is offered to Bhagavan Sri Vishnu as Naivedyam.

What is the proportion of Moong dal and Rice:

Hindu Sanatana Dharma shastras rate the most divine naivedyam based on the proportion of Green gram to rice in the mudganna.

The naivedyam is rated as ultimate and supreme if the ratio of green gram and rice is 2:1.

Naivedyam is medium if 1:2 and

Naivedyam is lowest if 1:4 or lower.

In our Puranas it is said that Sri Indra Deva’s consort Sri Shachi Devi, offered such ultimate and supreme mudganna mixed with ginger to Bhagavan Sri Vishnu and got rid of her all troubles. 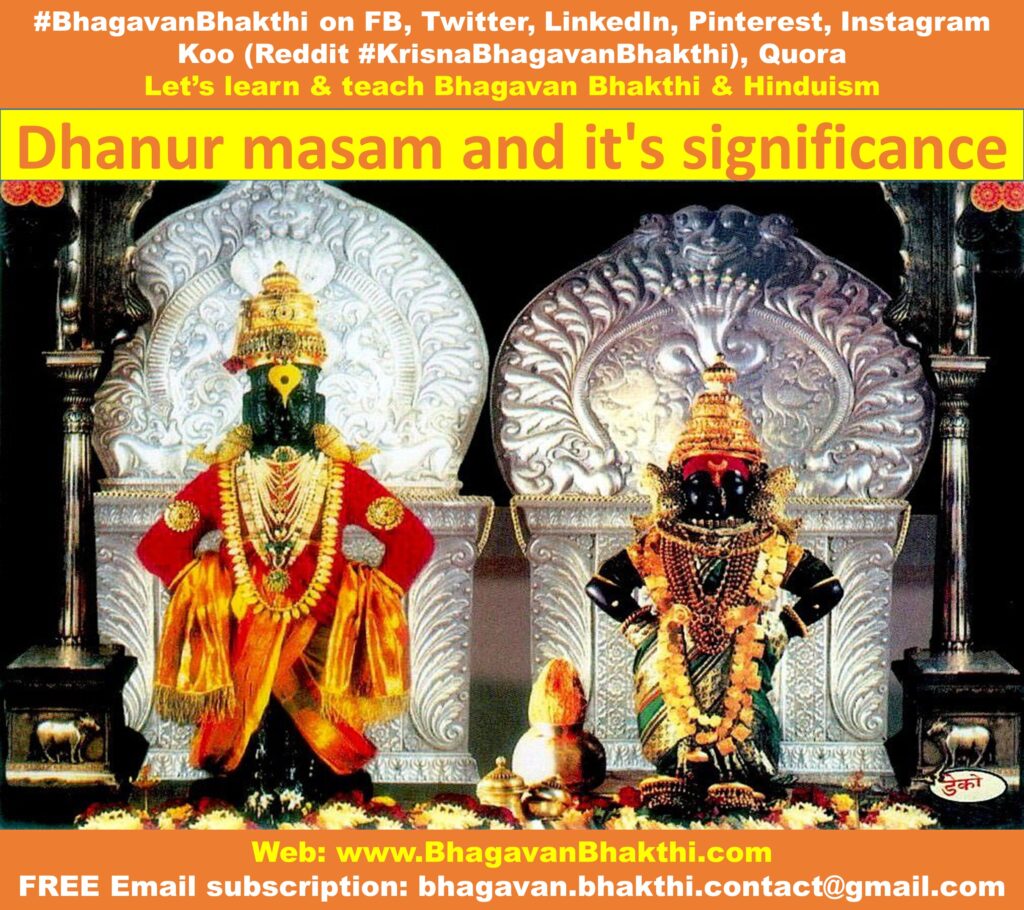 Very high significance is given to Dhanur masam in ‘Vaishnava Sampradayam’ and all the Bhagavan Sri Vishnu linked devalayas / temples perform sacred rituals and poojas early in the morning during this masam / month.

We can easily find temples offering ‘Sweet Pongal, Khara Pongal, and Puliyogare as Naivedya to Bhagavan Sri Vishnu, and distributing the same as divine prasadam to all his devotees during Dhanur masam.

There is also a great health related significances with these divine food items during Dhanur masam.

At Tirupati, the divine abode of Bhagavan Sri Venkateshwara, we find the priests reciting ‘Tiruppavai’, that is, a divine song composed by ‘Sri Godadevi’ (Also called as Andal) who was an ardent devotee of Bhagavan Sri Krishna, instead of the usual ‘Suprabhatham’ in the early morning. 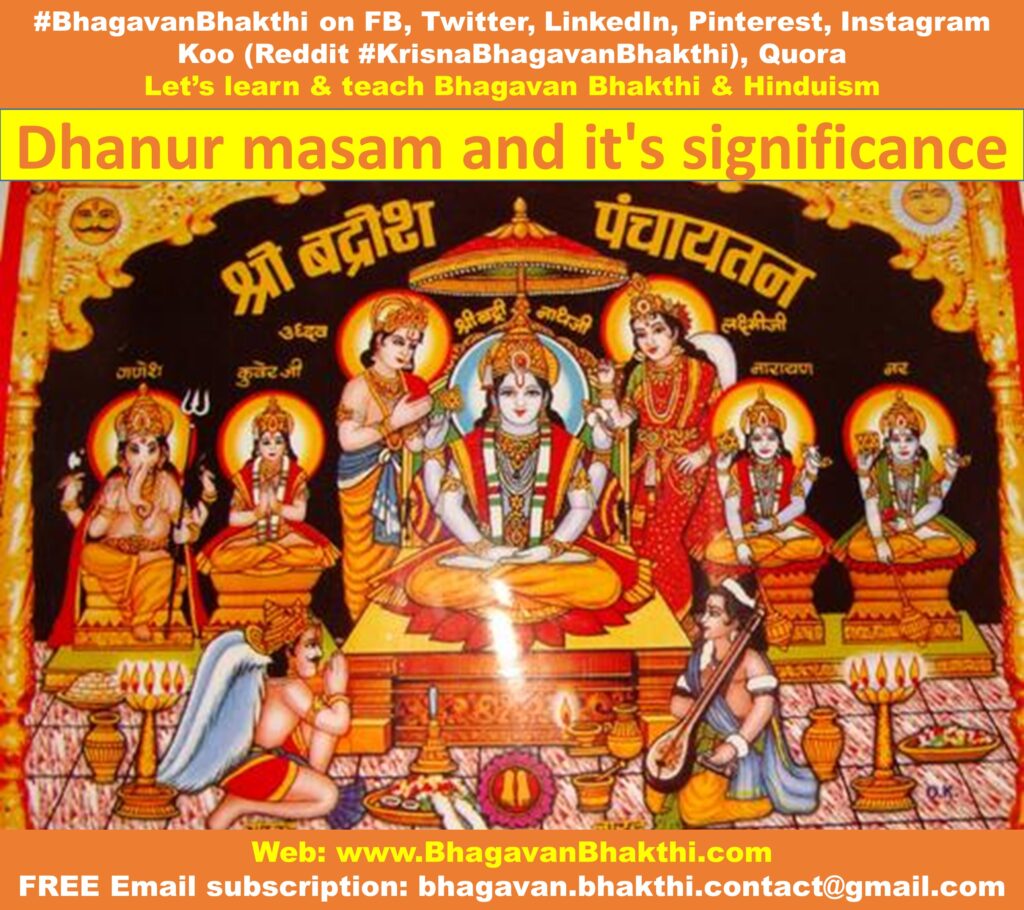 It is highly meritorious to chant the most divine Purusha Suktam, Sri Vishnu Sahasra Nama Stotram, Sri Vishnu Suktam and Narayana Upanishad during this divine period of Dhanur masam.

Instead, we should always worship Bhagavan Sri Vishnu first and then Sri Maha Lakshmi Devi as prescribed in the Hindu Sanatana Dharma grantas.

Shukla paksha Ekadashi (either in Mārgaśirṣa / Agrahāyaṇa’ or ‘Pushya masam) associated with Dhanur masam is revered as Vaikuntha Ekadashi or Mukkoti Ekadashi. This is the most divine day to worship Bhagavan Sri Vishnu.

Next day is known as Mukkoti Dwadashi.

Vyatipata yoga during Dhanur masam (Dhanur-Vyatipata Yoga) is given high importance and it is believed that any Pitru karya or charity given in respectful reverence to one’s Pitrus on this auspicious day is considered as highly meritorious and divine.

As prescribed in ‘Sri Venkatachala Mahatmya’, it is said that, taking bath in Sri Swamy Pushkarini Teertham at Tirumala on the day of Shukla Paksha Dwadashi tithi (That is on Mukkoti Dwadashi) in the month of Dhanur masam during ‘Arunodaya kalam’ is considered as highly divine.

On this Shukla Shukla Paksha Dwadashi tithi / day it is said that, more than three crores of sacred teerthas in the entire Bhulokam will enter into this Sri Swamy Pushkarini.

Taking the divine bath on this day in Swami Pushkarini is observed as highly meritorious and this is equivalent to taking bath in all the three crores of sacred teerthas.

It is revered as Sri Swamy Pushkarini Teertham Koti day in the almanac of Tirupati Tirumala Devalaya / temple.

The supremacy, sacredness and spirituality attached to the Dhanur masam, auspicious functions like vivaha / marriage, Gruha Pravesam etc. should be 100% avoided during this month.

During Dhanur masam, why only Arunodaya kalam is prescribed for worshiping Bhagavan Sri Vishnu?

As per the theory of Hindu Sanatana Dharma time element, it is said that, one day (Day + Night) for Devatas / Demigods is same and equal to one human year (365 days).

This whole one year of 365 days includes 6 months of Uttarayana and 6 months of Dakshinayana.

Thus, accordingly one human month (30 days + 30 nights) is equal to two hours for Devatas / Demigods as per their planets timings.

The period of Dhanur masam falling at the fag end of Dakshinayana, shows the last time frame of the night time for Devatas, that is Arunodaya time when they worship Bhagavan Sri Vishnu.

For this reason, we humans also need to worship Bhagavan Sri Maha Vishnu at a time that coincides with the Arunodaya Kaalam for Devatas / Demigods.

This coincidentally matches with the Dhanur masam timings.

Thus, this is the auspicious period and it is known as Arunodaya kalam or Brahmi Muhurtam.

Any pooja / worship conducted during Arunodaya kalam is said to be of highest divinity and this yields meritorious results for us.

In Hindu Sanatana Dharma shastras for everything a specific time frame and measurement is set and prescribed according to the theory of time element.

Thus and therefore performing correct Karmas at the right time and seeking divine blessings that yields more better and better results is intelligence.

This below shloka is as given in Agneya Purana. It states that:

One has to complete the pooja / worship when the stars are still twinkling in the sky, that is, during the Arunodaya kalam. This is the best time to do pooja / worship.

Whereas if the pooja / worship that is done after the stars have disappeared, but before sunrise, it is considered somewhere as medium,

Also, similarly the pooja / worship that is completed after sunrise is inferior.

And if the pooja / worship done in the afternoon is realistically useless.

We have to do the pooja / worship and naivedyam at least 96 minutes before sunrise.

Consequences of not doing the pooja / worship in time during dhanurmasa

As per Agneya Purana:

We who who does not perform the pooja / worship of Bhagavan Sri Vishnu in time (As said above), that is, before Sunrise will get dāridrya (indigence / extreme poverty) during his / her next seven lives, as well he / she will suffer from diseases and his mental strength will be highly limited.

Dos and Don’ts during the Dhanur Masam

3. Offering Naivedya to Bhagavan Sri Vishnu as prescribed in the shastras.

5. to perform Pitru Karyas on the day of Dhanur Vyatipata yoga

6. To avoid performing all the auspicious functions like marriage, gruha pravesham, etc. during the Dhanur masam.

7. Performing pooja rituals during Arunodaya kalam, that is, two hours before Sunrise.

Advantages of performing pooja / worship in time during Dhanur masam

Someone who is doing the pooja / worship at least for one day in the early morning during Dhanur masam, will get the pooja’s good deeds which will be equal to 1000 years.

(A person who is performing the pooja / worship will get dhana (wealth), dhanya (food grains), and in all his births he will be born as a true Vaishnava.)

Should we have to eat the food before sunrise

(Hindu Sanatana Dharma never allows someone to eat during the night time (probably after 10 p.m. and before Sunrise.)

(Even someone who is performing the Ekadashi fasting, has to eat food / drink water on Dwadashi after performing the pooja / worship after the Sunrise.)

About Shraaddha during Dhanur masam

If someone have died during the Dhanur masam, all the pitru karyas coming in this period must be done before Sunrise. That person will get the punyam (good deeds) for having done the shraaddha only if he does it before Sunrise and not after Sunrise.

Why Dhanur masam is also termed as Shoonya masam

This whole masam / month is 100% reserved for Bhagavan Sri Vishnu.

One has to perform the pooja / worship of Sri Lakshmi Devi along with Bhagavan Sri Vishnu.

Thus to perform the pooja / worship of Bhagavan Sri Vishnu, we have to 100% avoid other ‘Shubha karyas’ (Divine good works) in thid month.

This month is not favorable for performing any other good works like vivaham (marriage), upanayanam, gruha pravesham etc.

Thus, one must not do any such Shubha karyas in this month.