Just before going to the “List of demons killed by Hanuman”, let us have a brief idea of that great devotee of Lord Hanuman 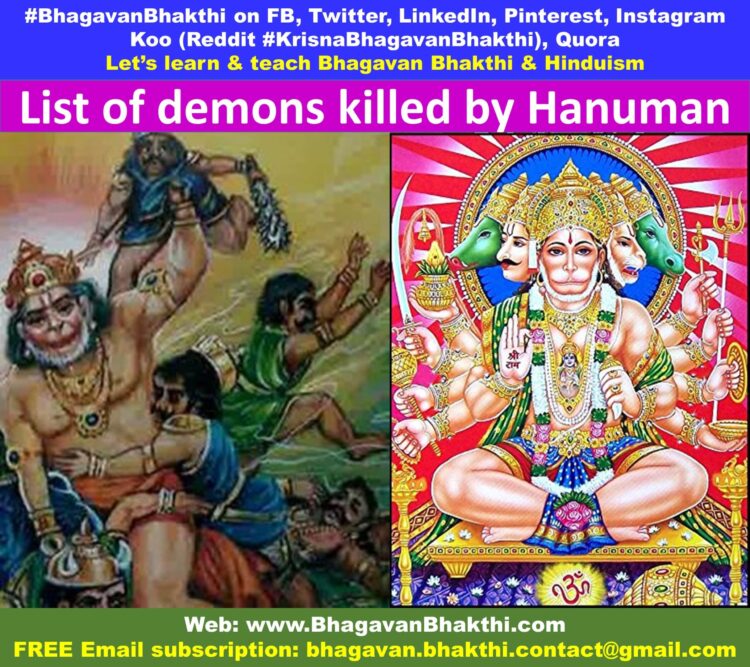 And father name is Kesari (Thus Hanuman is caleld as Kesari Nandana).

Without which Hanuman will not accept our pooja / worship.

For Hanuman, first most important Bhagavan is Bhagavan Sri Rama and then it is Sri Sita Devi.

Thus chanting Bhagavan Sri Rama and Sri Sita Devi names will make Hanuman happy and will in turn Hanuman will automatically bless us.

Hanuman is also still living on this earth and is staying in a place called Kimpurusha Khandha.

And even today he is serving Bhagavan Sri Rama in Kimpurusha Khandha.

Now, let us move to our main subject, that is, “List of demons killed by Hanuman”:

There are thousands and lakhs etc. number of demons either defeated or killed by our Great Hanuman according to both the the divine epic of Ramayana.

List of demons killed (or fought) by Hanuman is as given below:

Now, let us know the about the above list and much more in detail:

But Hanuman has always overpowered and defeated this demon Ravana a few times.

Hanuman didn’t killed Ravana only because Bhagavan Sri Vishnu (Rama) had taken oath of killing him. 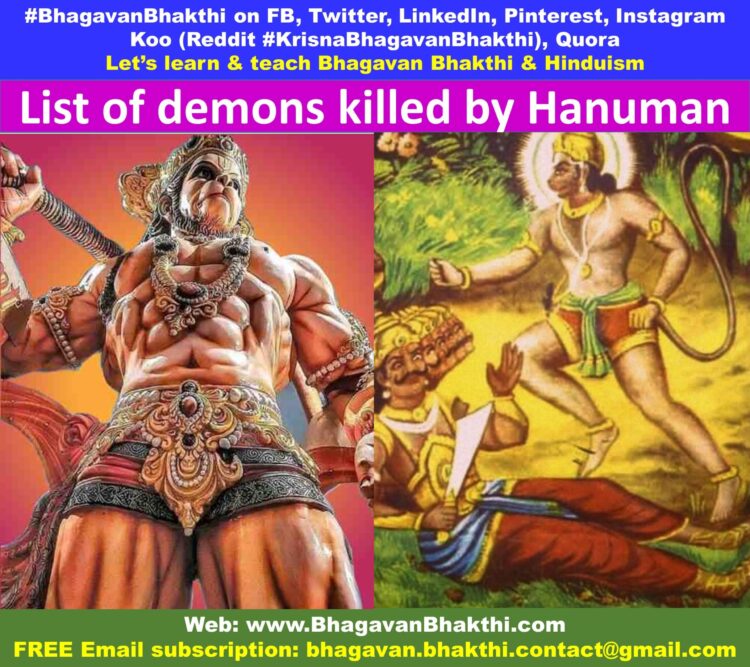 (In the earlier life, Ravana was a security guard in the Vaikuntha and was known as Jaya.)

he along with Kumbhakarna (Vijaya in Vaikuntha) had to take birth on earth.)

(Firstly Jaya and Vijaya take birth as Hiranyakashipu and Hiranyaksha.)

(Secondly as Ravana and Kumbhakarna.)

(And thirdly as Shishupala and Dantavakra.)

(All the three times, these demons were killed by Bhagavan Sri Vishnu avatars.)

(Ravana and Kumbhakarna were killed by Bhagavan Sri Rama.)

(Similarly both Shishupala and Dantavakra were killed by Bhagavan Sri Krishna.)

Once in the battle at Lanka, Hanuman with highest ease punches Ravana.

On this punch, Ravana omits blood from all his ten mouths.

That is the greatness and great power of our Great Hanuman Ji. 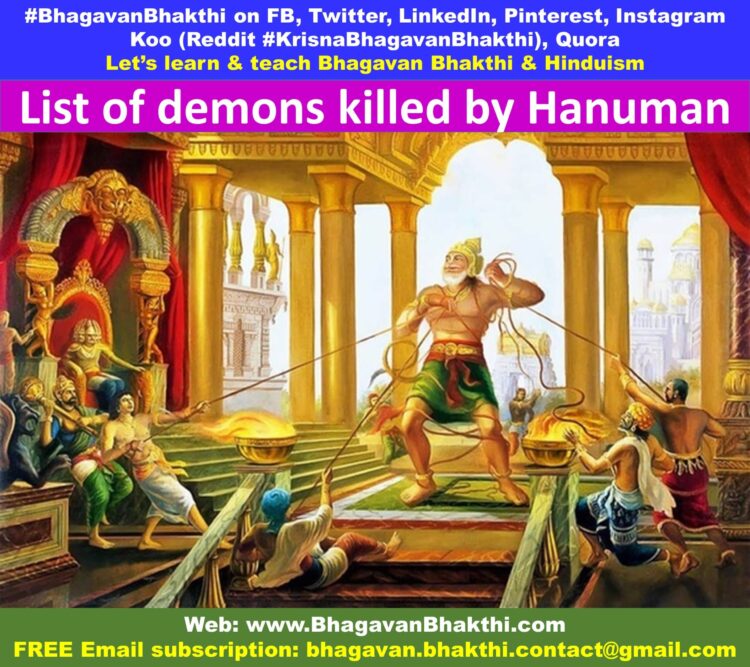 During this period, Indrajeeta (Meghanatha) comes in-between and starts fighting with Hanuman.

At one stage, Indrajeeta comes to know that he will be defeated by Hanuman very easily and thus he uses the divine ‘Brahmastra’ to kill Hanuman.

But even ‘Brahmastra’ can’t do anything to Hanuman.

Because of respect to Sri Brahma Deva, Hanuman acts as if he had lost the battle.

(And also was wanting to talk peace before war as per the orders of Bhagavan Sri Rama.)

3. Akshaya Kumara : He was the youngest son of Ravana and Mandodari Devi. 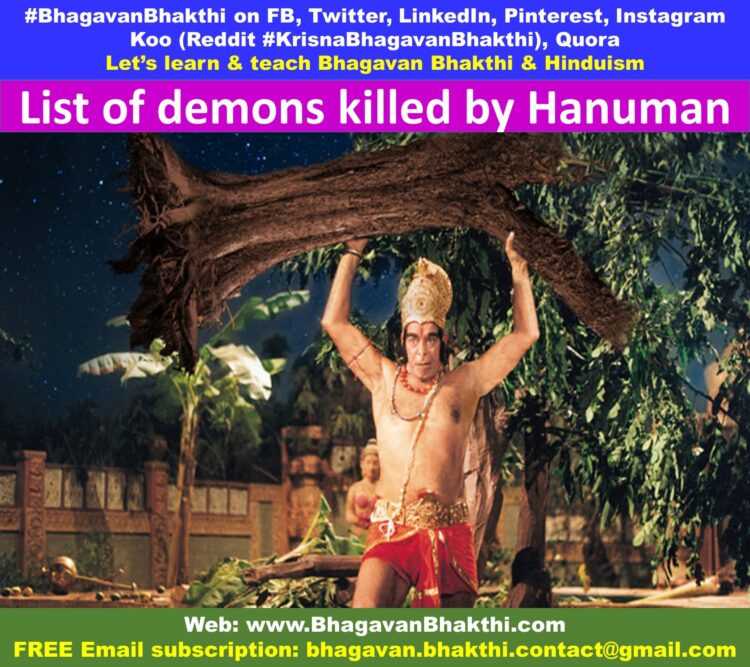 Even though he was a highly powerful warrior and also had divine chariot, which was very powerful and safeguarded by few mantras.

He was very easily killed by our Great Hanuman during the same period when Hanuman acts as if he was captured by Indrajeeta.

4. Seven sons of Prahasta : Prahasta was the son of Sumali and Ketumati.

And in his next birth he was reborn as ‘Purochana’ in the Mahabharata as Duryodhana’s very close aide and who was responsible for the Lakshagriha incident. 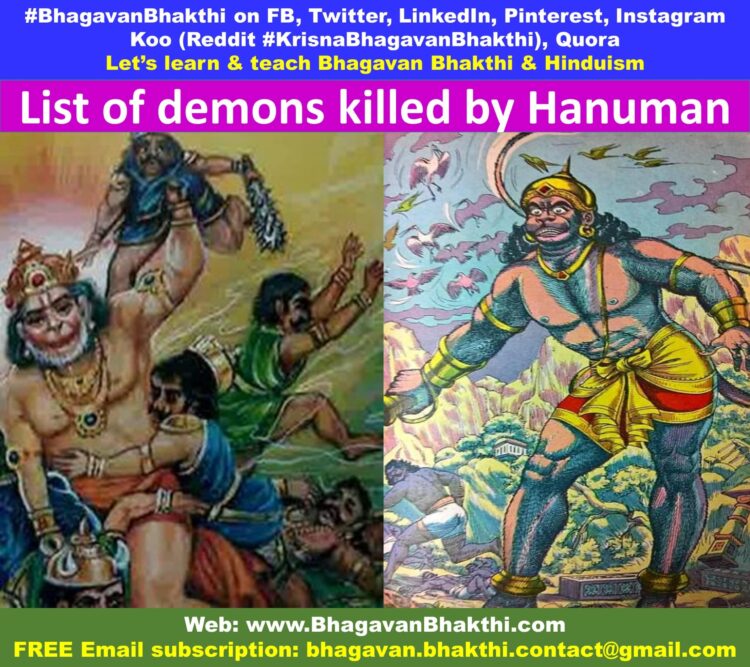 Prahasta was mama (Maternal uncle) of Ravana and was the brother of Ravana’s mother Keikasi.

Prahasta sons were very attacking warriors and were well equipped with a very huge army.

Also they had modern machineries of that time.

Half of their army was succumbed by our mighty Hanuman and whereas others were killed by our great Hanuman including the seven sons of Prahasta.

5. Akampana : His name meaning is someone who can’t be shaken easily. 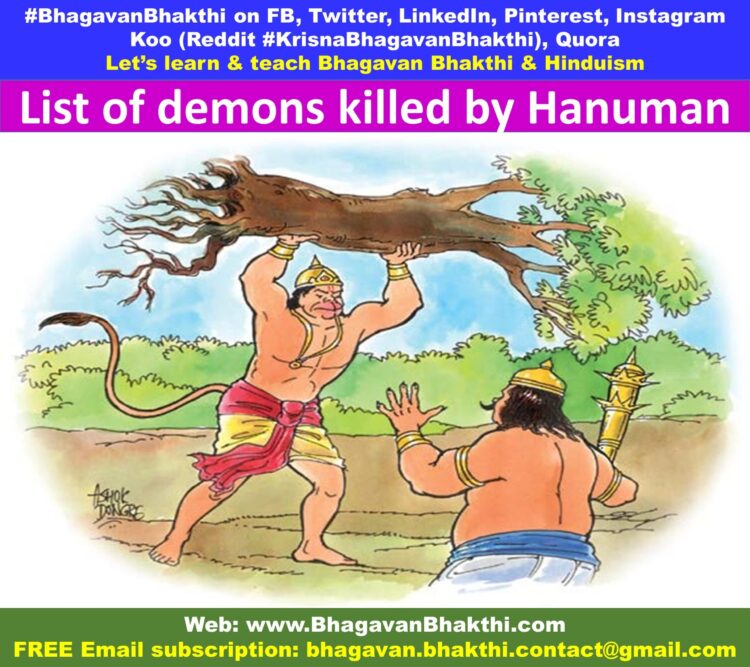 Akampana repelled a mountain which was thrown by our Hanuman at him.

But finally was killed with a simple blow of a tree by Hanuman.

Thus, Akampana was very easily killed by our Hanuman in the Lanka war.

6. Jambumali : He was a son of Prahasta. Jambumali was effortlessly killed by our Hanuman during the Lanka war. 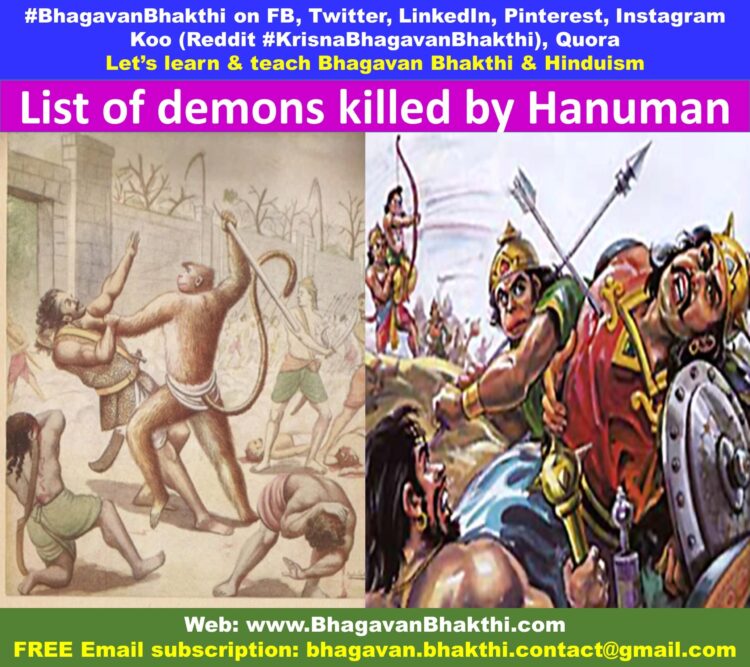 Our Hanuman Spun an iron rod at Jambumali and thus crushed all his bones, head and body, and completely disfigured Jambumali very seriously.

He was informed by Kubera to watch over the Pisacas (A type of evil Ghosts).

Hanuman gave direct blows on Nikumbha to kill him comfortably. 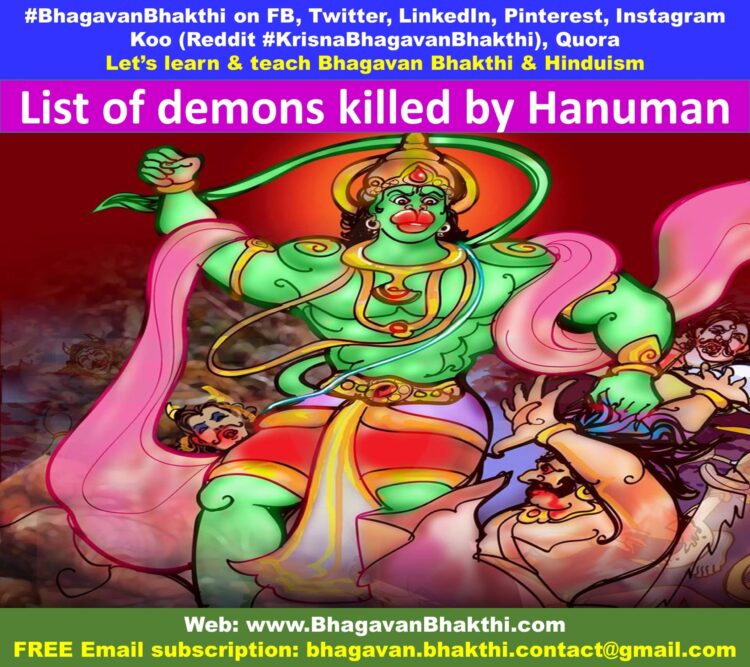 8. Kalanemi : In the divine epic Ramayana, Kalanemi was Maricha’s son and minister of Ravana and was assigned to kill Hanuman. 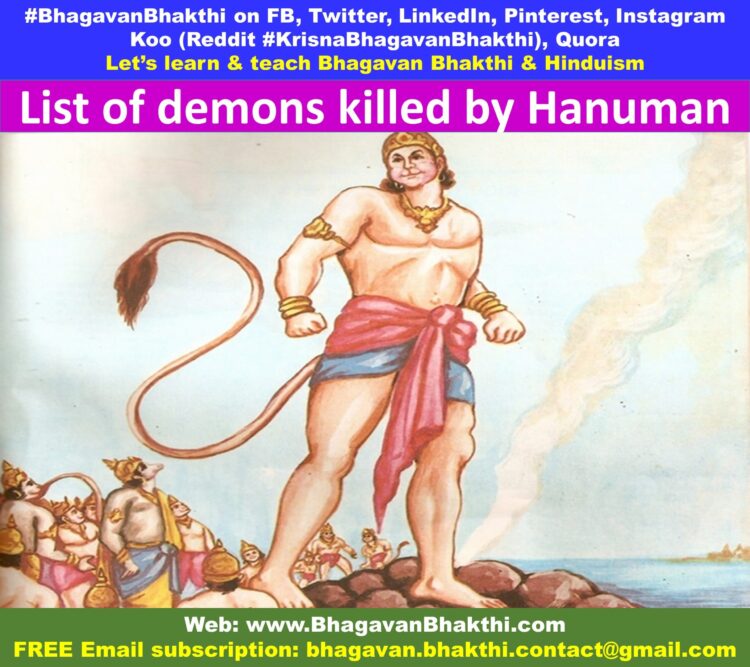 Kalanemi was an expert in shape shifting and a great trickster.

Kalanemi was sent by Ravana to kill Hanuman, and to stop him from taking herbs for Lakshmana.

Our Hanuman wrapped Kalanemi in his tail with ease, and threw him into Lanka and was eventually killed.

This same Kalanemi with the same name was the son of Hiranyaksha (Brother of Hiranyakashipu) and the brother of Andhakasura.

In this birth (Son of Hiranyaksha), Kalameni was killed by Bhagavan Sri Vishnu.

Again this Kalanemi was reborn as Kamsa in Mathura as the mama (Maternal uncle) of Bhagavan Sri Krishna.

Many of us know that Kamsa was killed by Bhagavan Sri Krishna.

9. Ahiravana : Ahiravana is also called as Mahiravana and was a brother of Ravana.

Ahiravana means, “someone who is not Ravana”.

Ahiravana = Ahi + Ravana = Not + Ravana (Just like ahita / अहित / ಅಹಿತ, which means unpleasant or which is not pleasant). 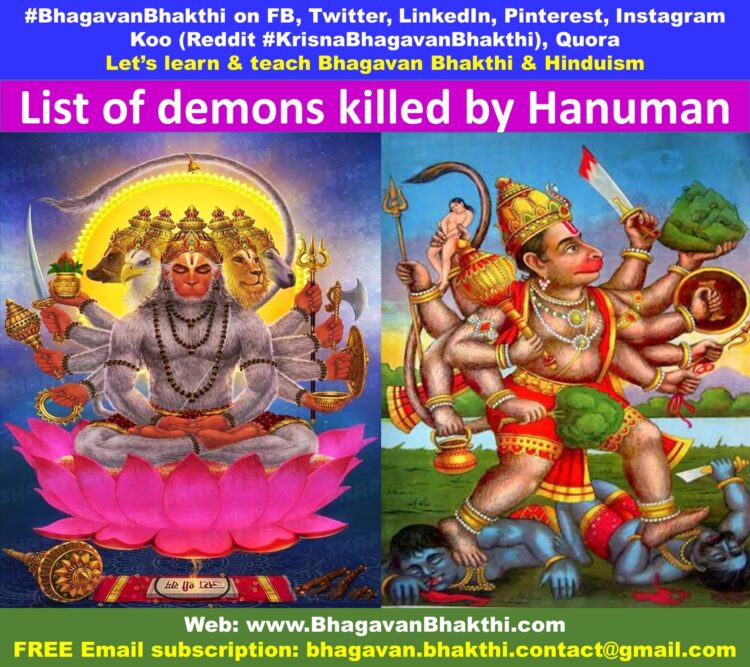 In the Kirittivasi Ramayana, Ahiravana was the son of great sage Vishrava and thus was a brother of Ravana.

During the battle of Ramayana, Ravana ask his brothers to help him in the battle.

As our Hanuman was taking security at nights for both Bhagavan Sri Rama and Lakshmana.

Ahiravana was able to take any roopa (form) and thus took the roopa of Vibhishana (Brother of Ravana).

In this roopa Ahiravana took Bhagavan Sri Rama and Lakshmana to his kingdom in Patala Loka (The Underworld).

After this incident, our Hanuman went in search of Bhagavan Sri Rama and Lakshmana and released both and came back to earth.

While in Patala Loka, Hanuman unchallengingly killed Ahiravana and destroyed his whole of the kingdom.

In this process our Hanuman assumes the divine ‘Pancha Mukhi’ form, that is, five faces form.

The five faces of this divine form of Hanuman are Hayagriva, Narasimha, Garuda, Varaha and his own Hanuman face.

(And also this Garuda form is different from Bhagavan Sri Vishnu’s Garuda mount.)

These demons were almost equal to Ravana in bravery and ability. 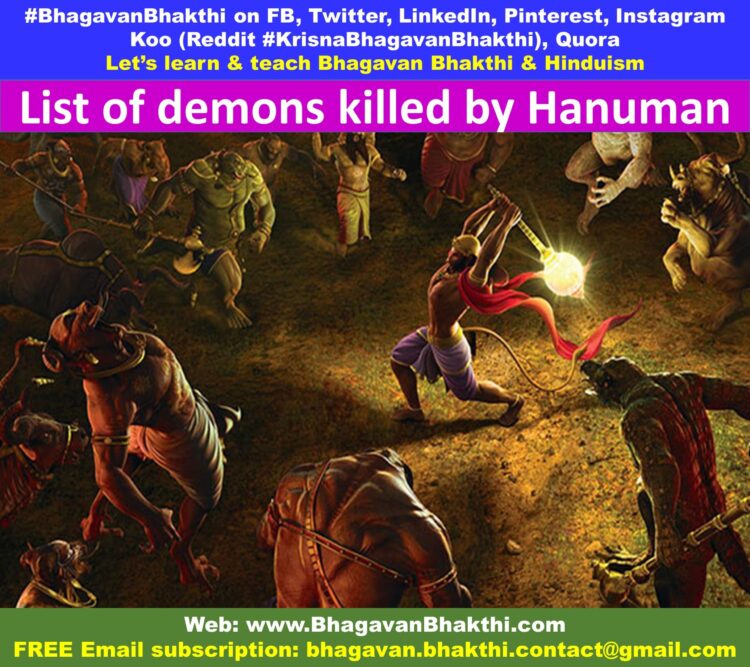 (This was the same period when Akshaya Kumara was killed by Hanuman).

This means, he is the अंतक / ಅಂತಕ / Someone who terminates his enemies. 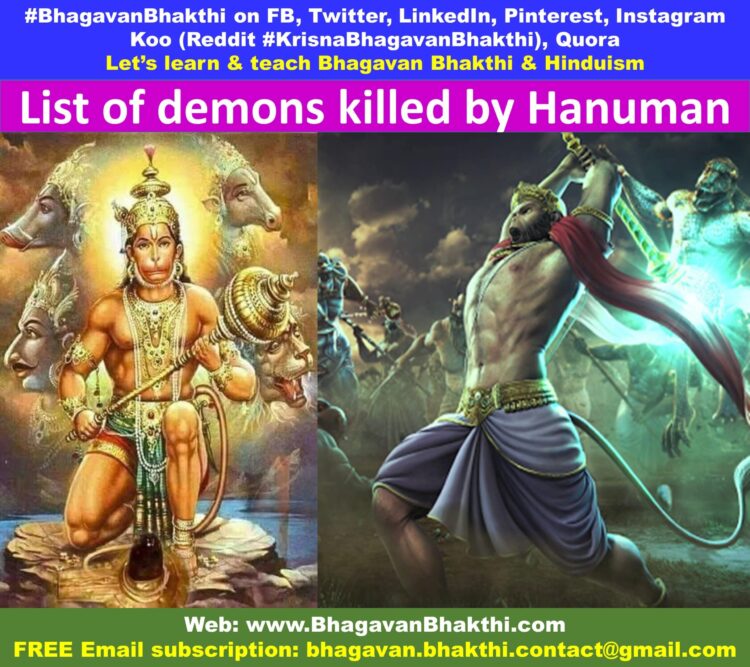 But who can stop our Hanuman.

Hanuman with highest ease struck on Devantaka’s forehead and thus this completely crushed him and he died on the spot with huge blood flow from his head.

12. Lankini : She was a lady demoness and was security incharge for the main gate of Lanka.

When Hanuman tries to enter the main gate of Lanka (When Hanuman goes in search of Mother Sri Sita Deva), Lankini tries to stop our Hanuman.

But, she was defeated with a simple blow by our Great Hanuman. 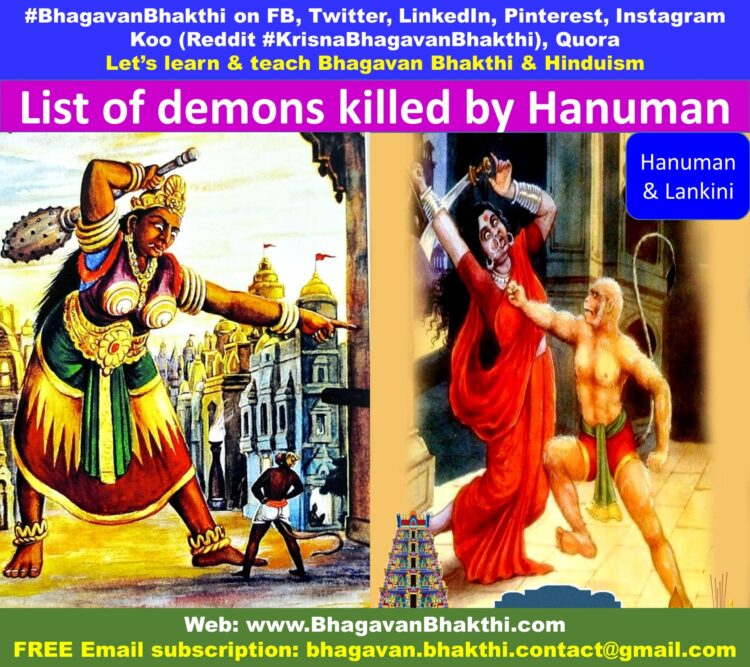 [Lankini’s background: As per the great epic of the divine Ramayana, Lankini used to be a guardian of the abode of Satya Loka (Also called as Sri Brahma Loka).]

[As it was her duty to safeguard the Satya Loka, she became hubristic and egoistic about her position and work.]

[Lankini treated others in Satya Loka with disrespect, due to which she was cursed by Sri Brahma Deva to guard the city of Rakshasas on earth forever.]

[However, Lankini immediately realized her mistake and begged for pardon].

she will be freed of the curse as soon as divine monkey will defeat her in battle and thus bring to end the age of Rakshasas on earth.]

When our Great Hanuman was crossing the ocean to reach Lanka in search of Mother Sri Sita Devi,

Simhika was hiding in the ocean and captured Hanuman’s shadow.

(This is similar to the Bermuda Triangle of today’s age). 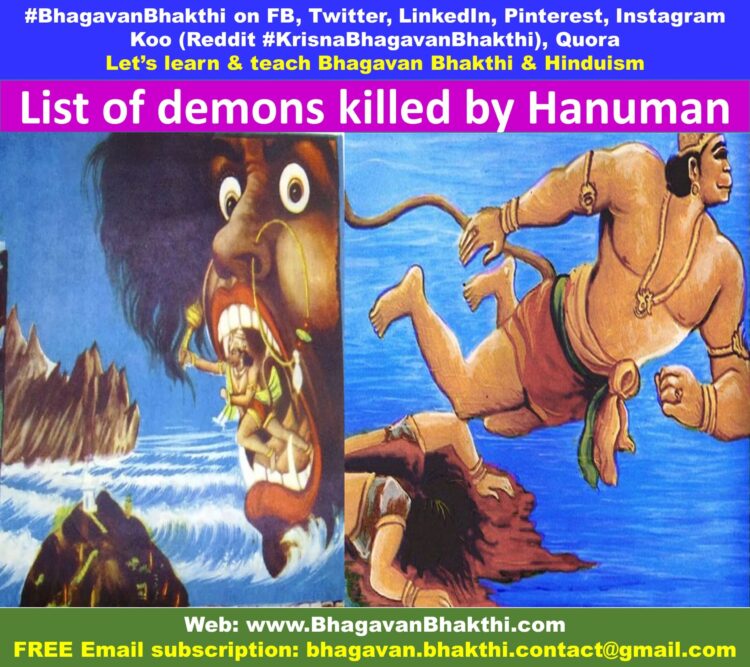 But our Hanuman highly intelligent and thus he dived into Simhika’s mouth and came out tearing up her stomach with ease, ending the life of Simhika.

At the time Simhika was was a cause of fear for many Devatas / Demigods and celestials beings.

During the Lanka war along with their armies, all these were slayed by our Hanuman very comfortably. 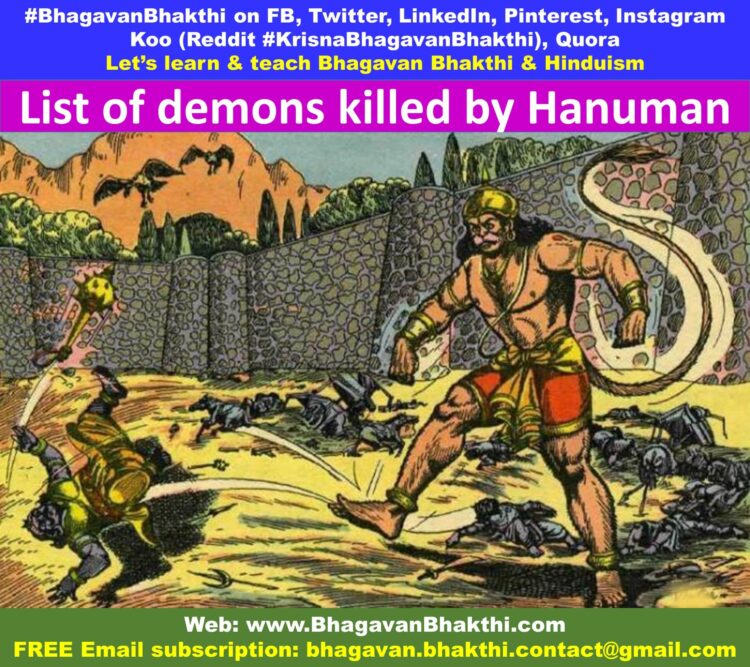 All these demons were more powerful than few of the Devatas / Demigods.

This means, literally he is someone who had three heads. 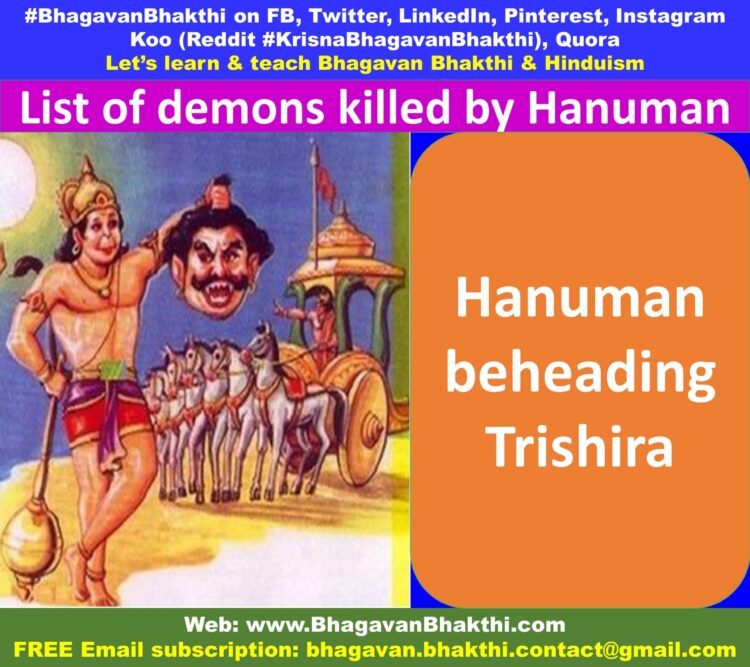 In the divine epic of Ramayana and during the Lanka war, Trishira engaged Hanuman in a fight and hit Hanuman with multiple number of arrows.

For this Hanuman tells to Trishira that “the arrows were nothing but like flowers being showered on my body”.

After this, our Great Hanuman beheaded Trishira’s head using his own sword.

He was the ten sons of Sumali and Ketumati. 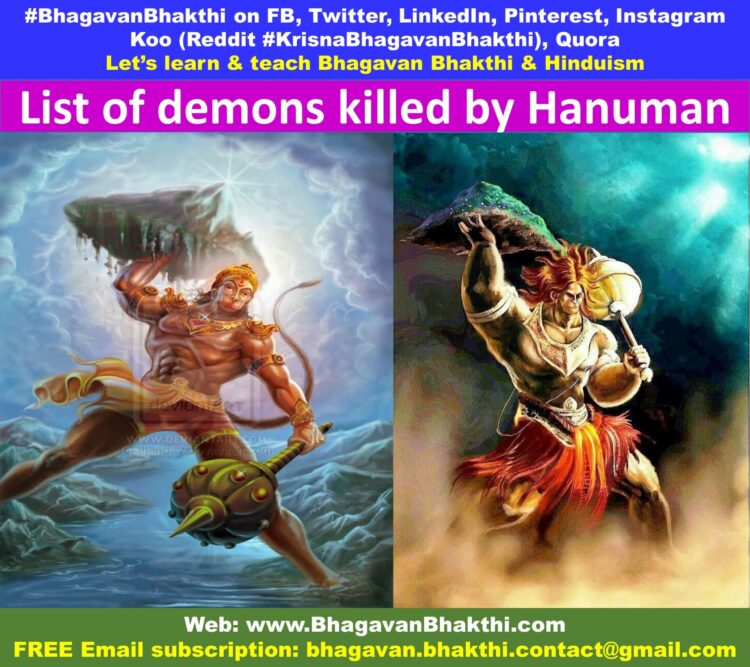 Dhumraksha was also very powerful demon in the army of Ravana.

Dhumraksha was also fighting alongside of Ravana, during Ravana’s conquest against Devatas / Demigods.

Our Great Hanuman shattered Dhumraksha’s chariot and finally killed him by hitting him with a mountain peak.

His body was crushed by this blow.

Ruma is been referred in Kishkindha Kanda of the great epic of Ramayana. 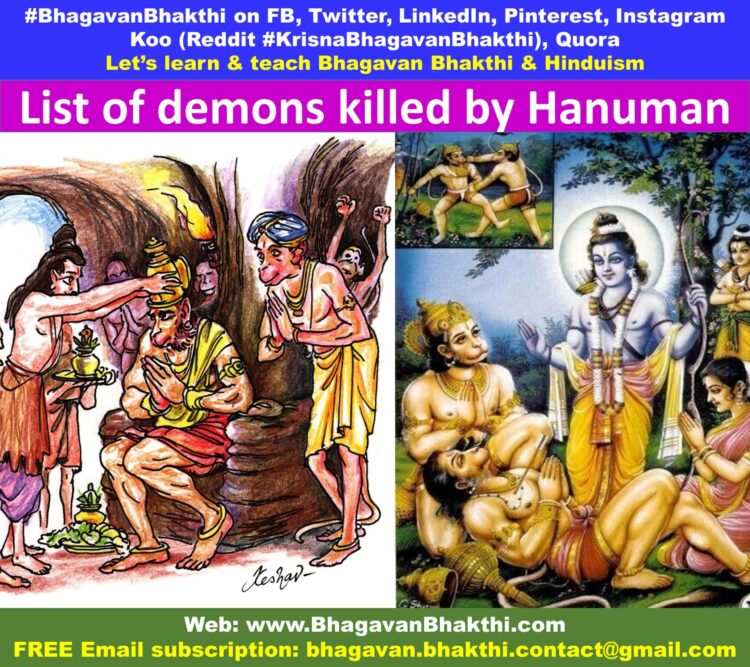 Sugriva falls in love with Ruma and both decides to marry with each other.

But Ruma’s father was against this.

Hence, Sugriva with the help of his very close friend Hanuman kidnaps Ruma with her permission and thus Sugriva and Ruma got married.

Ruma was taken away by Vali from Sugriva during the strife of two royal Vanara brothers (Vali being the avatar of Sri Indra Deva).

Later, the fact of Ruma being forcefully withheld by Vali became one of the main reason of Bhagavan Sri Rama slaying the Sri Indra Deva’s avatar Vali,

And helping Sugriva to become the King of Kishkinda (Present north Karnataka).

When Bhagavan Sri Rama was accused by Vali killing him behind the tree,

Bhagavan Sri Rama says his assassination was a pure punishment for the sin Vali committed when he robbed his own brother’s consort Ruma.

To know “Why Rama killed Vali secretly behind a tree?”, please visit the below link:

Why Rama killed Vali secretly behind a tree?

18. Shabari : Shabari was a great devotee of Bhagavan Sri Rama. 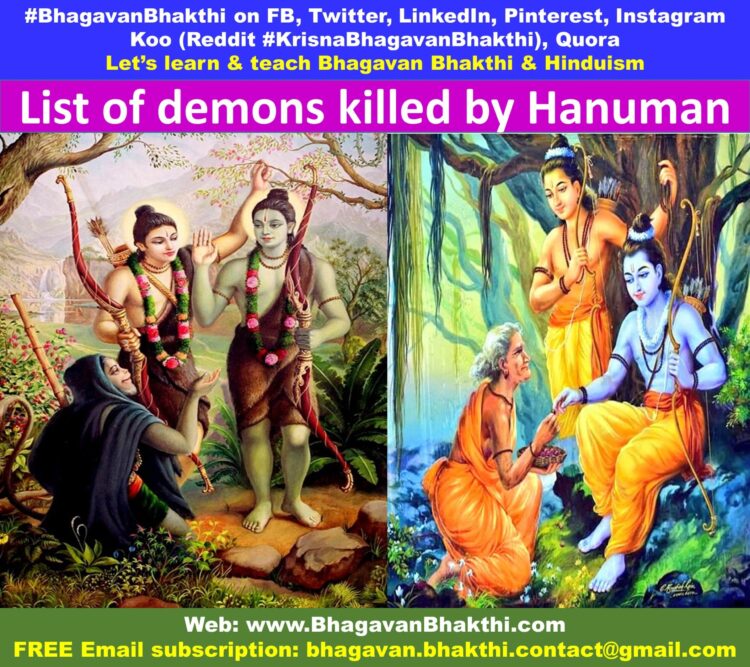 Shabari helped Bhagavan Sri Rama to find the address of Sugriva and Hanuman.

To know more information about the epic Ramayana, please visit the below link:

To continue reading about Hinduism (Sanatana Dharma), please visit the the below link:

You will get more information about the following by visiting the different links:

What is the Rama name correct meaning

To know the “List of demons killed by Sri Rama, visit the below link:

To know the “List of demons killed by Sri Krishna, visit the below link: