Sri Rama is called as ‘sarvadamana’, means he can destroy all as per his will and no one can stop him. 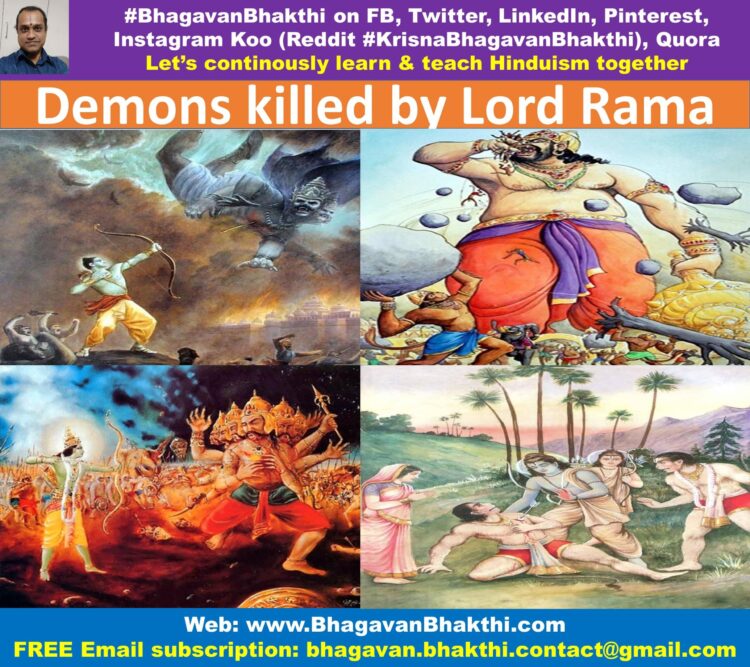 Sri Rama is also called as ‘karunasagara’, means he will definitely save all his bhaktadis / devotees.

Only thing we need to do, is to be a devotee of him and should completely surrender and depend on him.

Sri Rama always saves his devotees and similarly destroys who are against Dharma.

Same thing he did in this avatar of Sri Rama.

Sri Rama is the 7th avatar of Bhagavan Sri Vishnu.

Bhagavan Sri Rama has killed unlimited number of demons. Let us know few of them:

List of demons killed by Lord Rama is as given below:

Tataka – She is same as Putana, who was killed by Sri Krishna in the Dvapara Yuga / Mahabharata period.

She used to be a Yaksha in her earlier life. 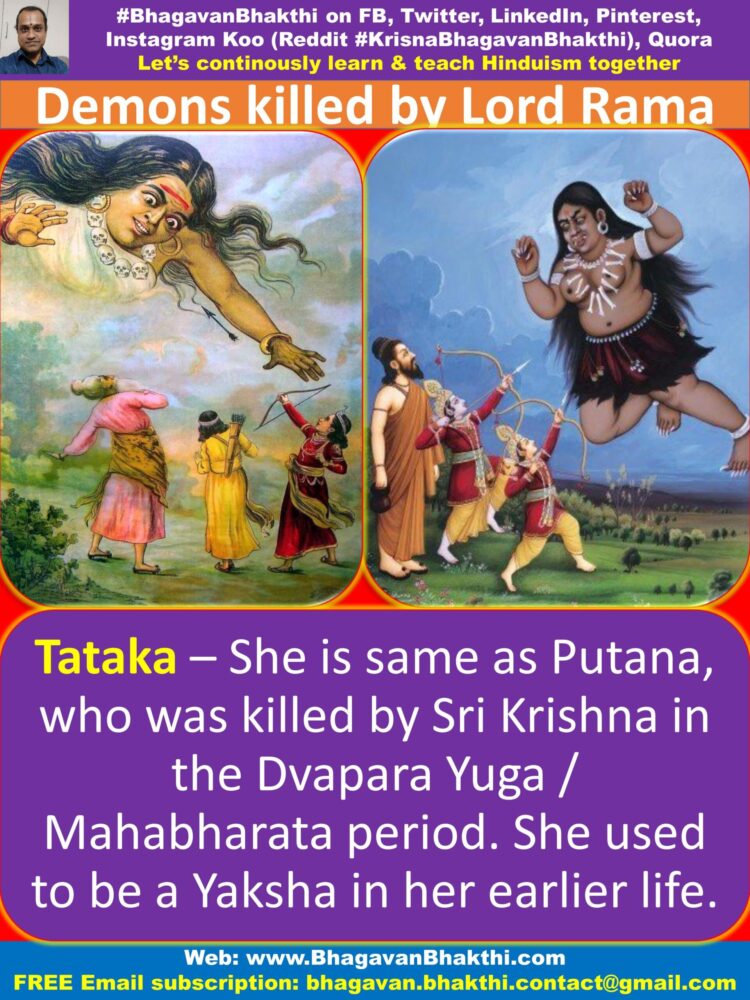 Khara and Dushana – Along with these two demons, Sri Rama also killed fourteen thousand other asuras. 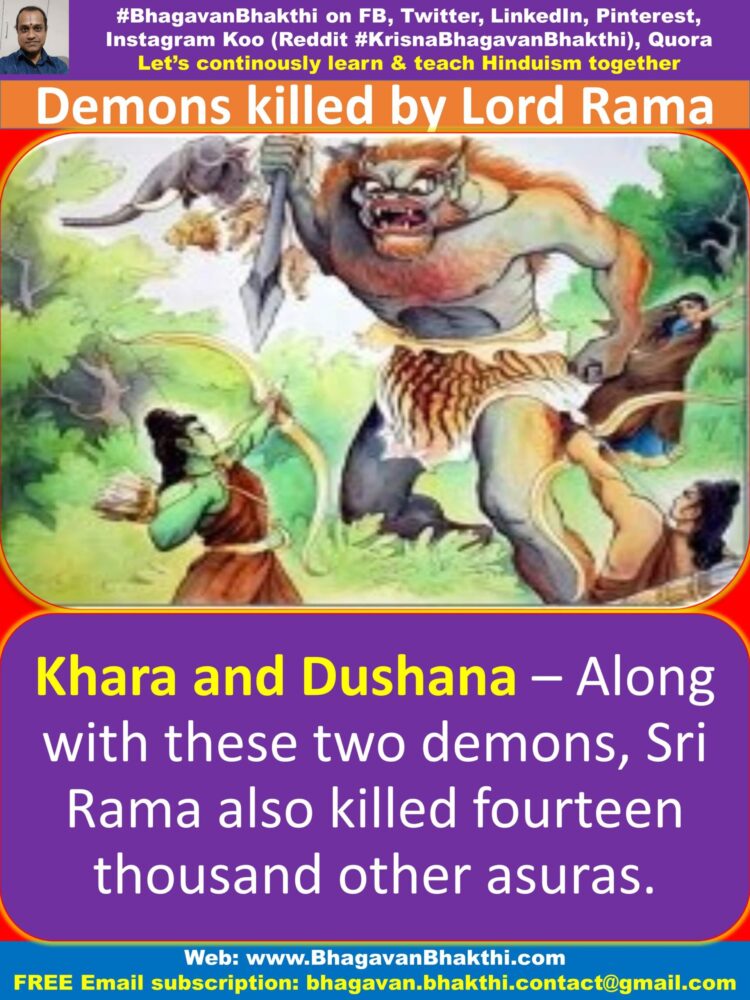 Subahu – He was killed on the instructions of Maharshi Vishvamitra. 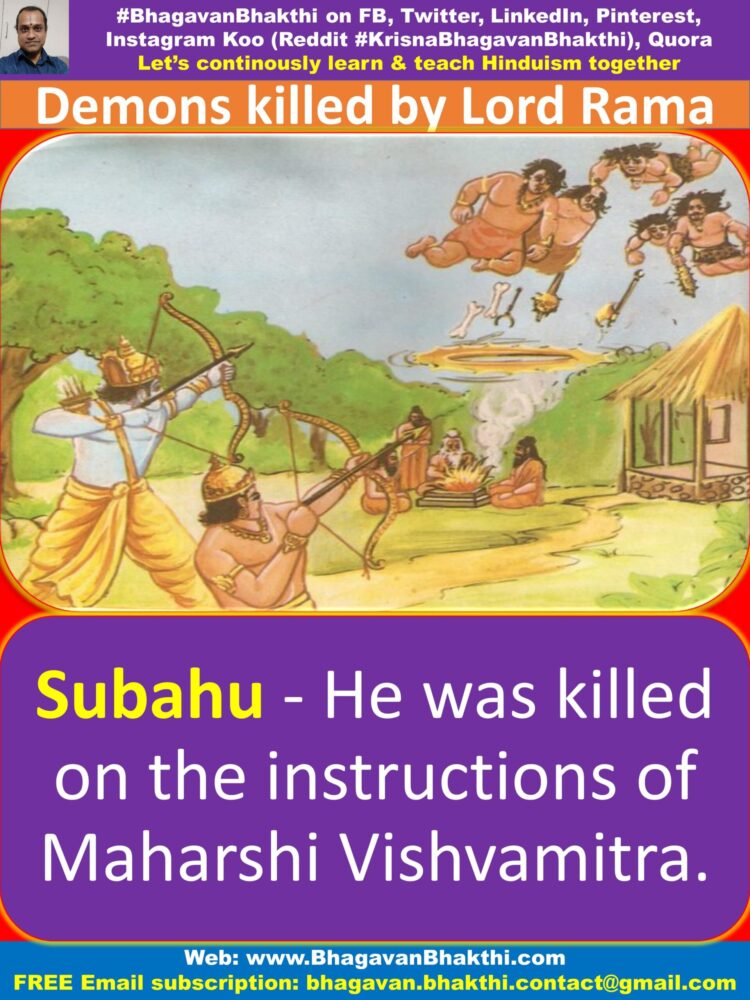 Maricha – He was first spared by Sri Rama.

But he was eventually killed by Sri Rama when he comes in the form of the golden deer. 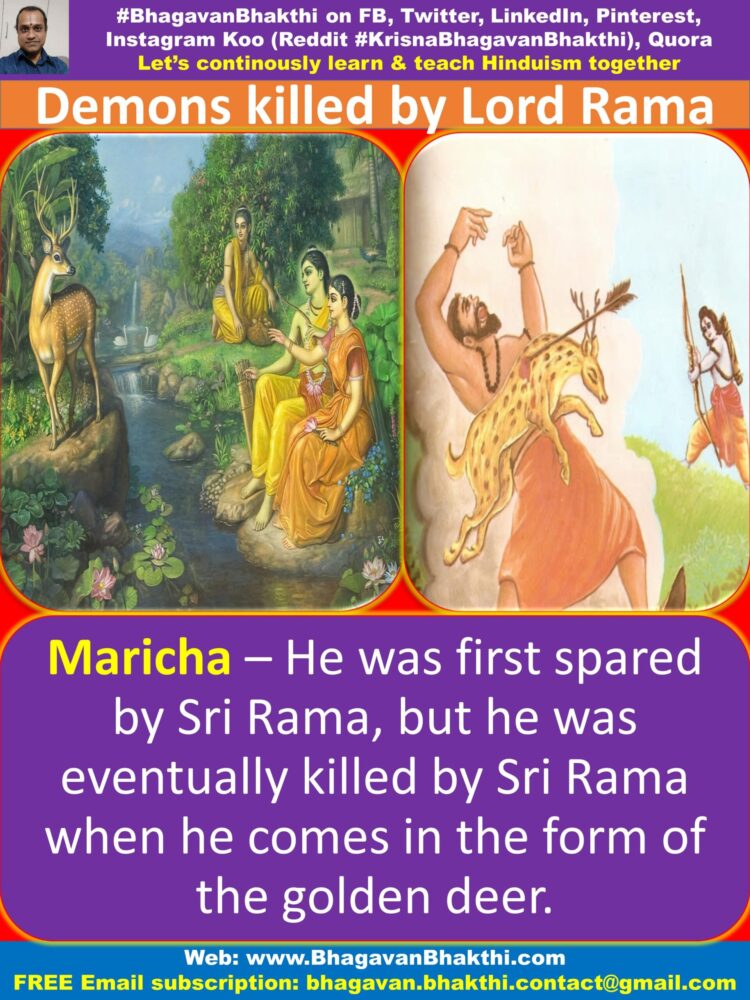 Vali – All though he was not demon (but he was an avatar of Sri Indra Deva).

He was killed by Sri Rama as he had made multiple cruel deeds. 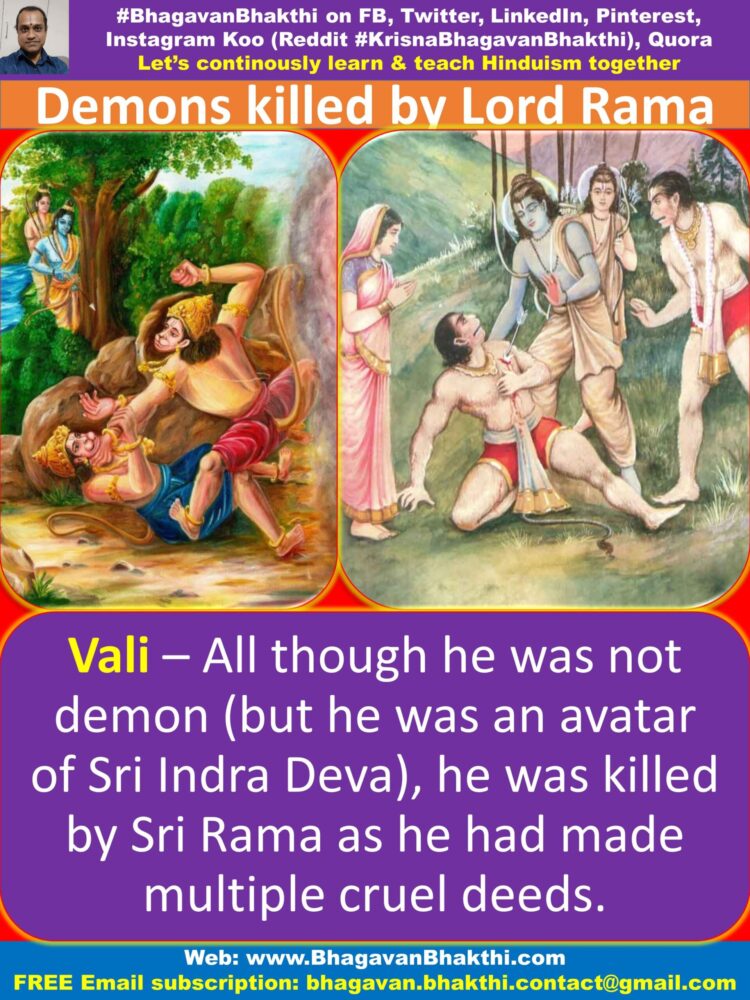 Makaraksha – He was son of demon Khara.

He fought alongside Ravana and was eventually killed by Sri Rama in the battle. 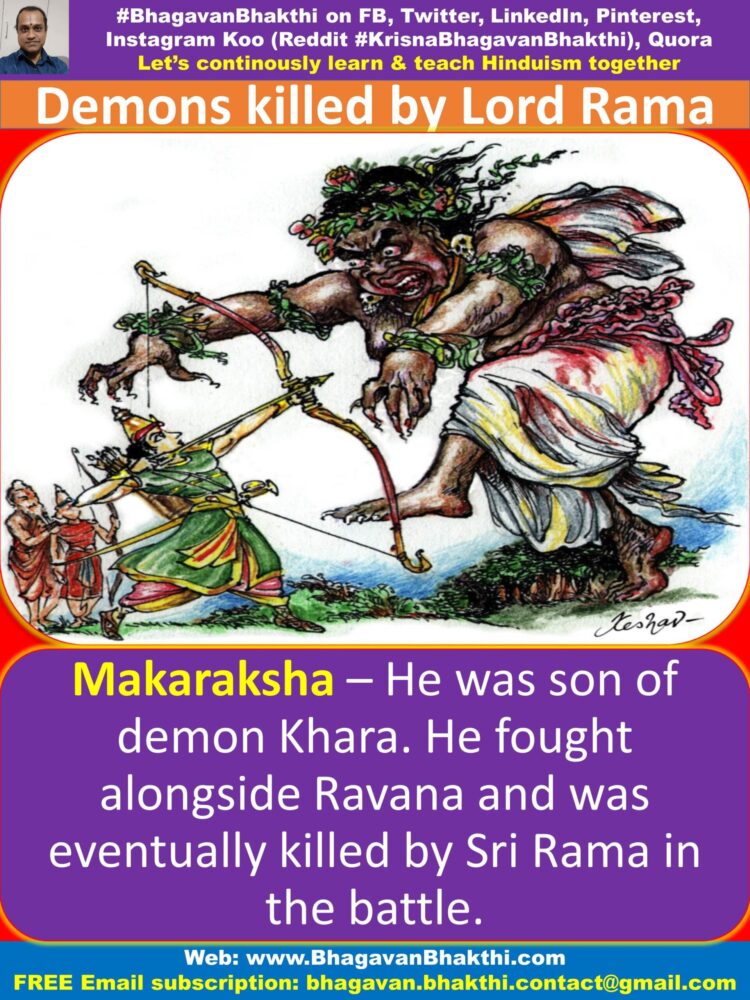 Kumbhakarana – He was killed in the battle at Lanka.

He was the brother of Ravana and also in his earlier life he had born as Hiranyaksha.

Also during the Dvapara Yuga / Mahabharata period, he was born as Dantavakra. 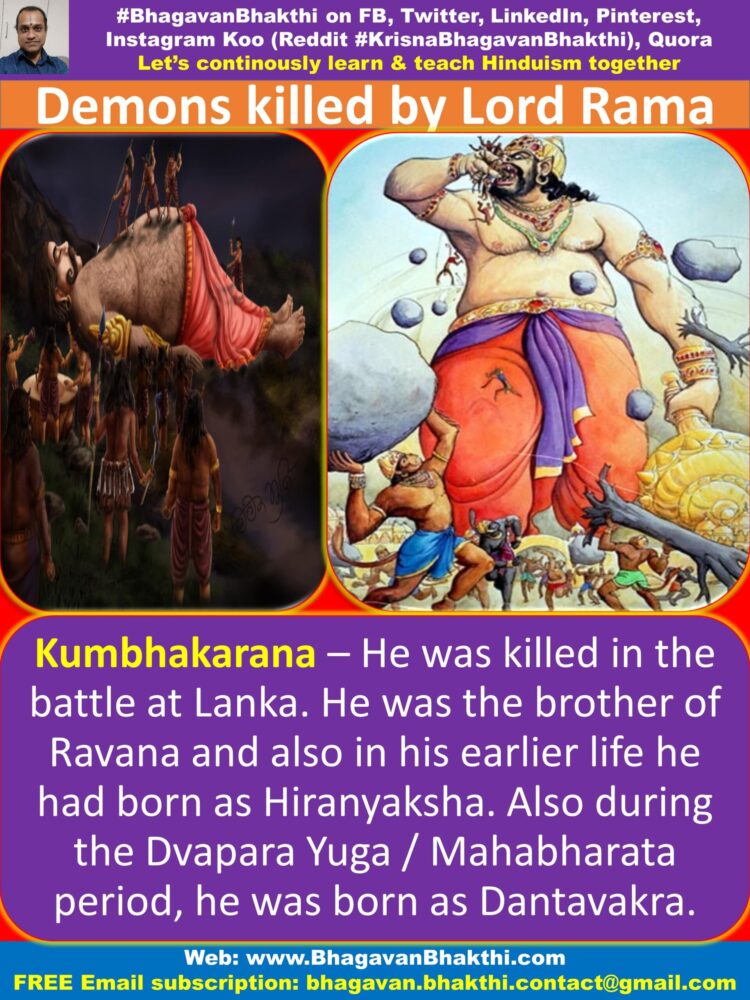 Ravana – Killed by Sri Rama in the battle at Lanka.

In his earlier life he had taken avatar as Hiranyaksha.

And during the Dvapara Yuga / Mahabharata period he has born as Shishupala. 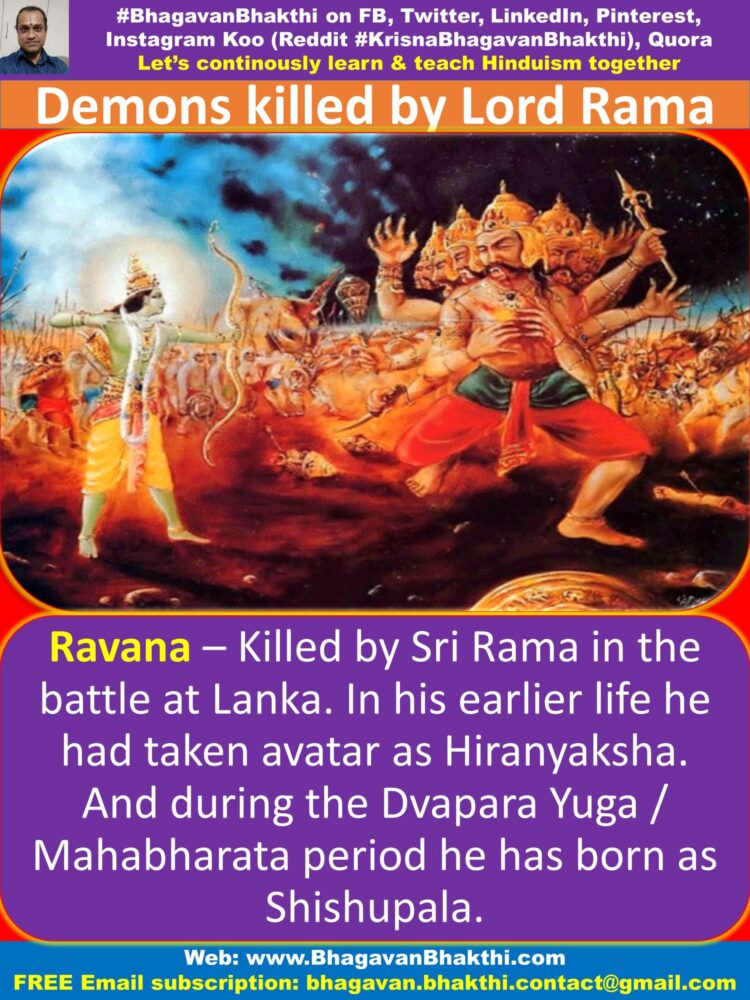 Kabandha – He was the same who didn’t had neck or head and had only one eye.

He was killed by both Sri Rama and Sri Lakshmana. 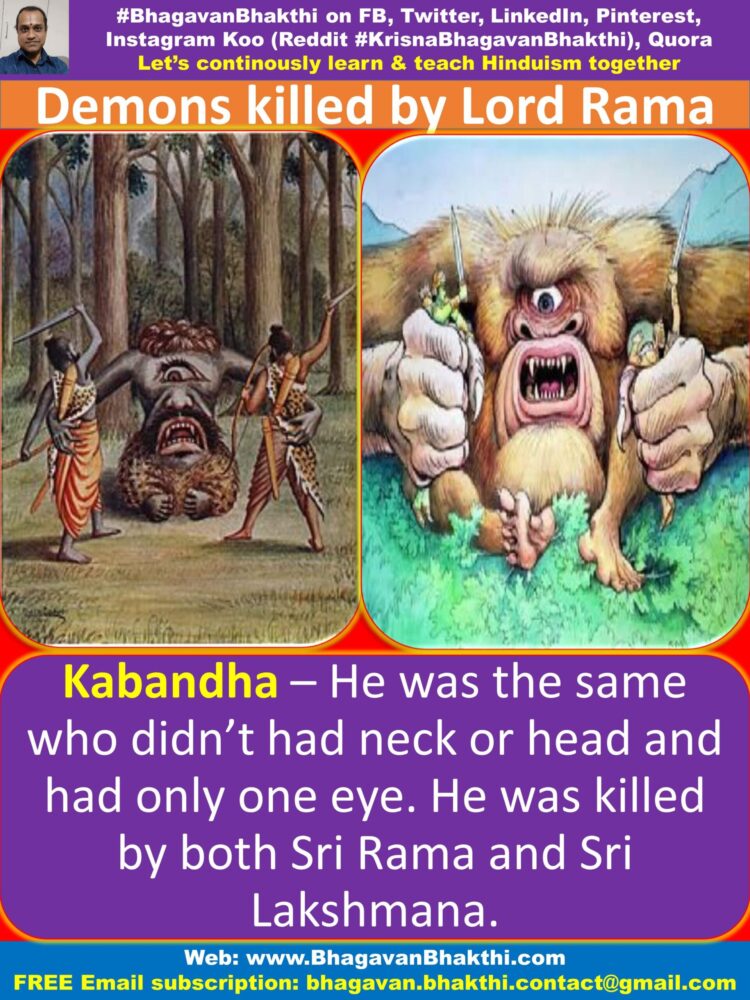 (He had the ashivadam / boon that he would not be killed by any weapon).

Seeing this, Sri Rama stood on this demon and Sri Lakshmana dug a moat and buries this demon alive. 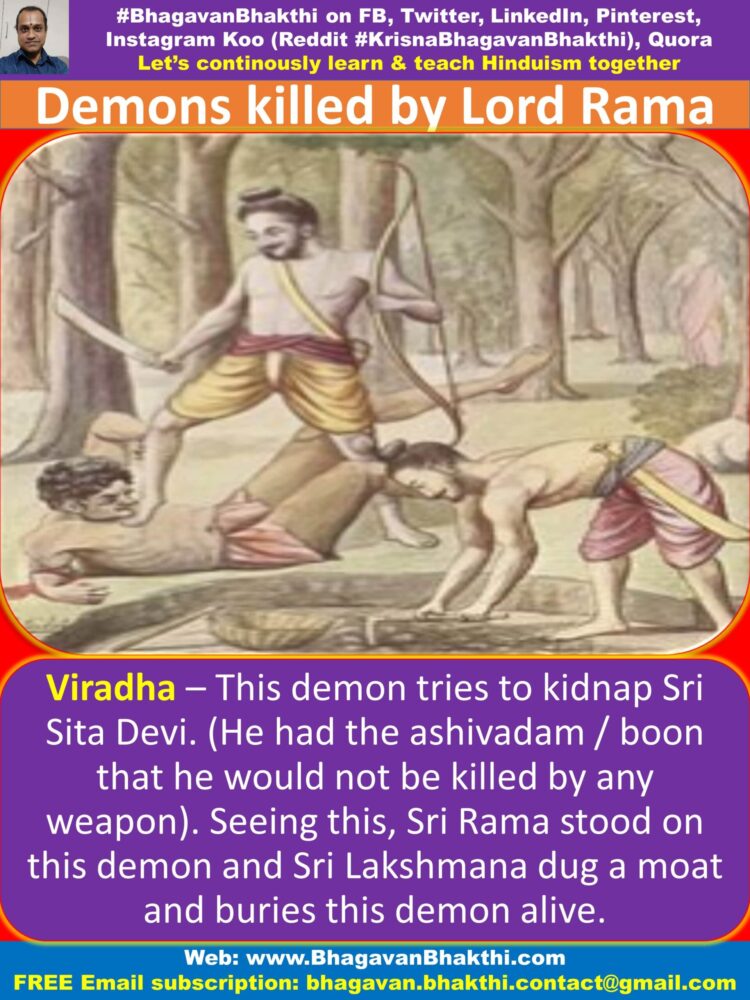 Trishira (Ravana’s son) – Was killed through Hanuman in the battle of Lanka.

Meghnatha / Indrajit (Ravana’s son) – He was killed through Sri Lakshmana in the Lanka battle.

He was again reborn as Dushasana during the Mahabharata period. 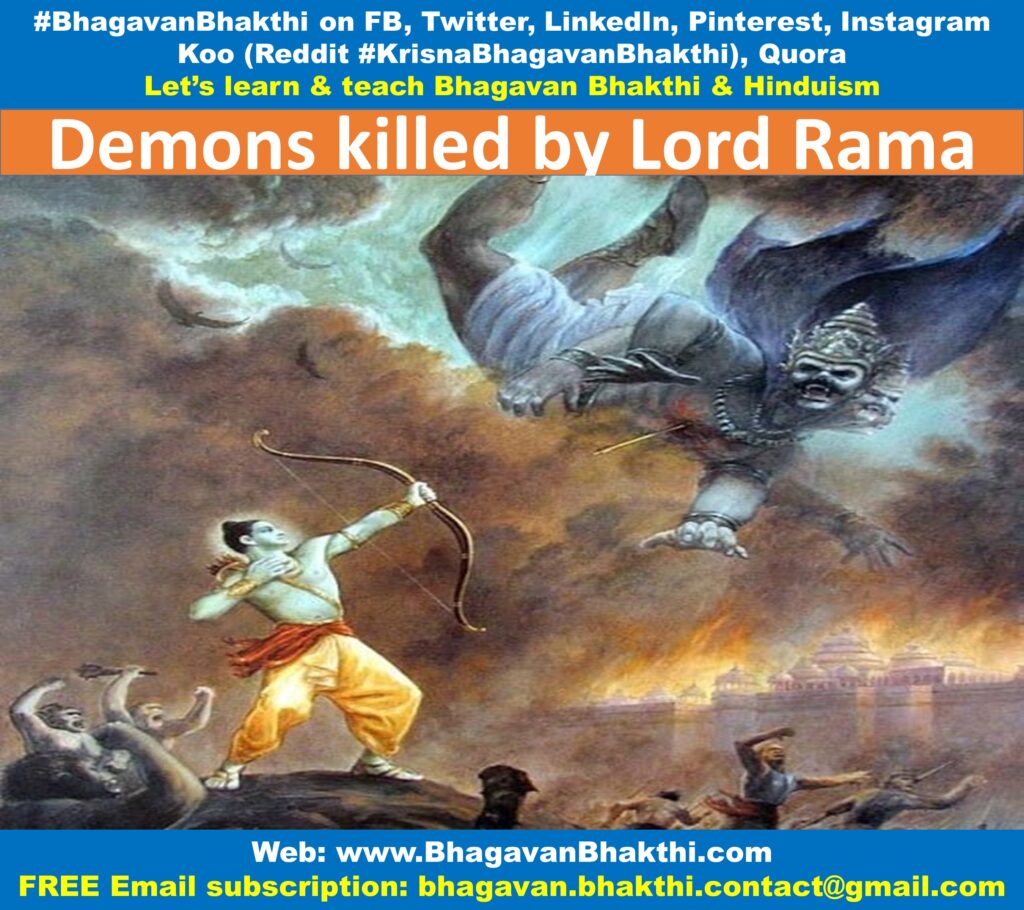 Atikaaya (Ravana’s son) – He was killed through Sri Lakshmana in the Lanka battle.

Akshayakumara (Ravana’s son) – He was killed through Sri Hanuman before the Lanka battle.

This happened when Sri Hanuman had come down in search of Sri Sita Devi.

Narantaka (Ravana’s son) – He was killed through Angada in the Lanka battle.

Devantaka (Ravana’s son) – He was killed through Sri Hanuman.

Prahasta – He was killed through Neela in the Lanka battle.

To know the list of demons killed by Bhagavan Sri Krishna, you can click the below link: