What is Udupi Paryaya meaning

Paryaya is a Sanskrit word and it is a Hindu Sanatana Dharma ritual which takes place on every alternate year. More importance is given in Sri Krishna Matha (Bhagavan Sri Krishna Temple) of Udupi, Karnataka.

The pooja and administration of Sri Krishna Matha is distributed among the Swami Jis (Sanyasis / Seers) of Ashta Matha (8 Mathas), which was established by the divine and great Dvaita philosopher Sri Madhvacharya Ji.

Every Swami Ji of each matha gets the auspicious chance to conduct pooja of Udupi Sri Krishna on rotation basis for every alternate year, that is, the Swamiji is changed every two years as per the Ashta Matha (8 Mathas). 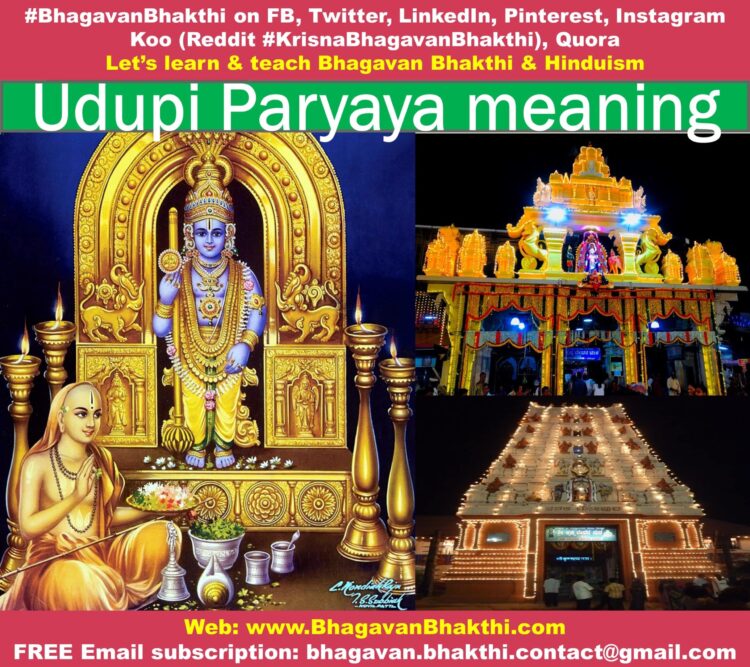 It takes place every alternate year, that is, it happens in every two years in even numbered years.

In Sanskrit Paryaya means as per the turn comes, / on rotation basis / alternatively / on succession basis etc.

The divine and most famous Udupi Sri Krishna Matha’s (temple’s) Paryaya, is one of the three most important events that has acquired huge Dharmic and adhyatmic (divinely spiritual) significance especially in Dvaita siddhanta that was started by Sri Madhvacharya Ji.

(The other two most important event are Sri Krishna Janmashtami and Sri Madhva Navami.)

Sri Madhvacharya Ji is the founder of Dvaita Siddhanta / philosophy (also called as Tattvavada Siddhanta) was instrumental in establishing the temple of Bhagavan Sri Krishna at Udupi (in Karnataka) and installation of the deity of Sri Bala Krishna.

How the deity of Bhagavan Sri Krishna was obtained by Sri Madhvacharya Ji was an unimaginable for the ordinary humans. Common many even can’t think in that way. 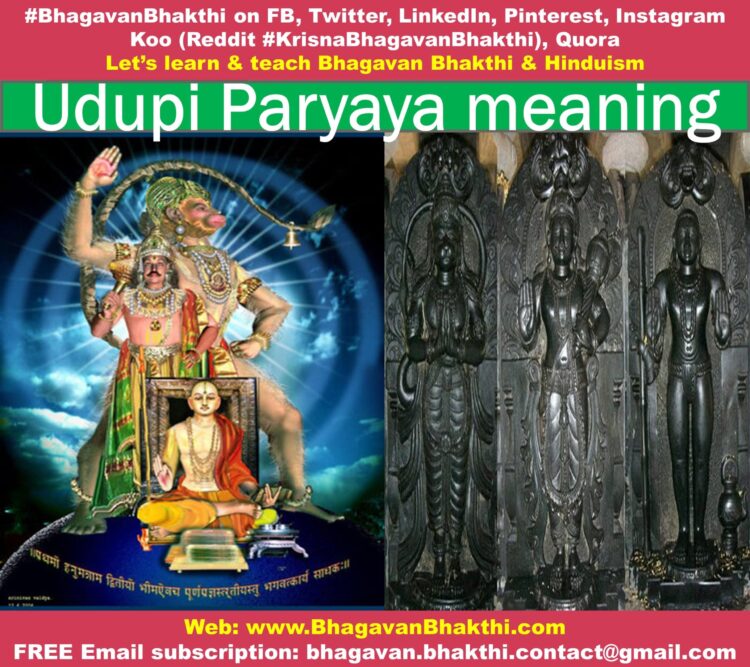 a. Hanuman – He served Bhagavan Sri Rama during the Treta Yuga.

b. Bhima – He served Bhagavan Sri Krishna during the Dwapara Yuga.

Sri Madhvacharya Ji not only installed the deity of Bhagavan Sri Krishna at Udupi, but also appointed eight of his prime Shishyas (disciples) to take forward his divine heritage and to have continuity to the worship of Bhagavan Sri Krishna on rotation basis (This is called as Paryaya / पर्याय / ಪರ್ಯಾಯ / paryāya) at Udupi (Karnataka).

The 8 prime disciples of Sri Madhvachary Ji are: 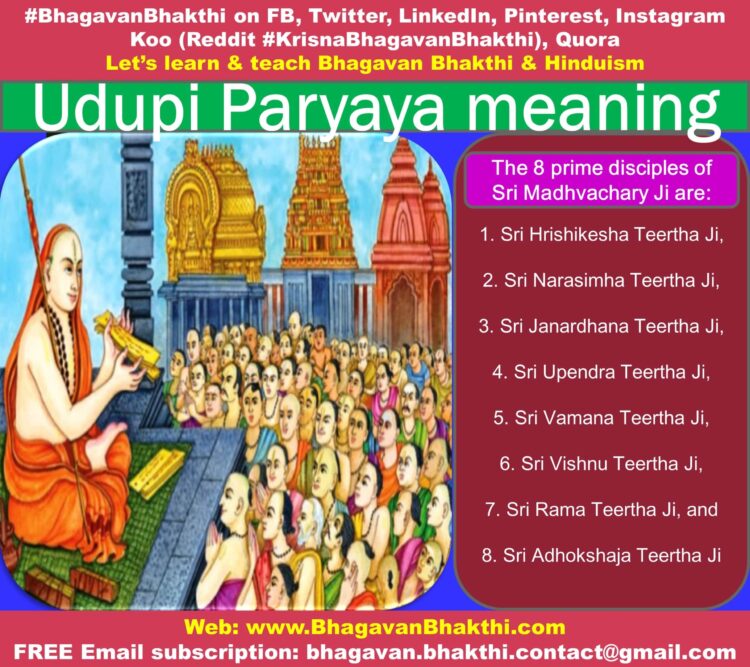 These eight disciples were also the Sanyasis (Pontiffs). They later established their own mathas known Ashta Matha (8 Mathas). These 8 Mathas are named after the surrounding villages where they originally resided and hailed from.

The Ashta Matha of Udupi are as given below: 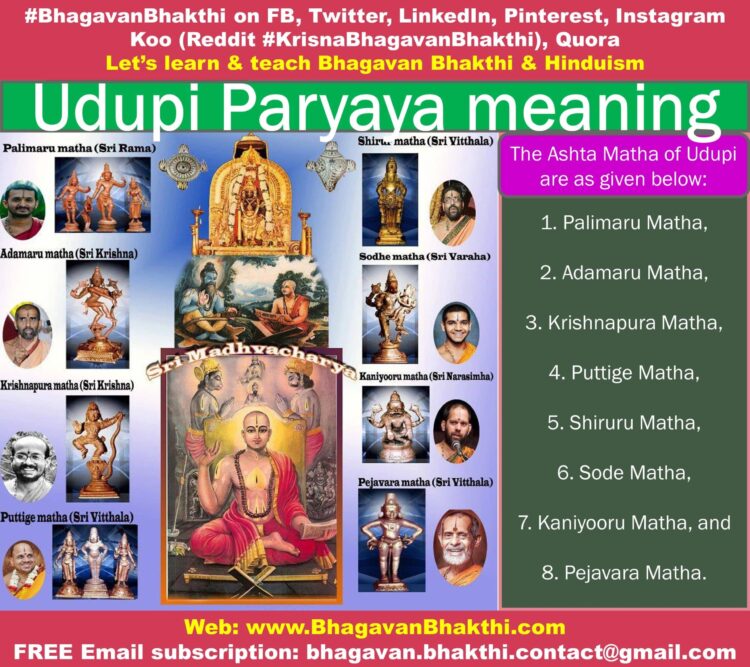 Even today the Paryaya method of worshipping Bhagavan Sri Krishna is in practice and administering Sri Krishna temple at Udupi is in vogue that takes place once in two years as said above through a ritual known as Paryaya.

This Paryaya ritual involves the following: 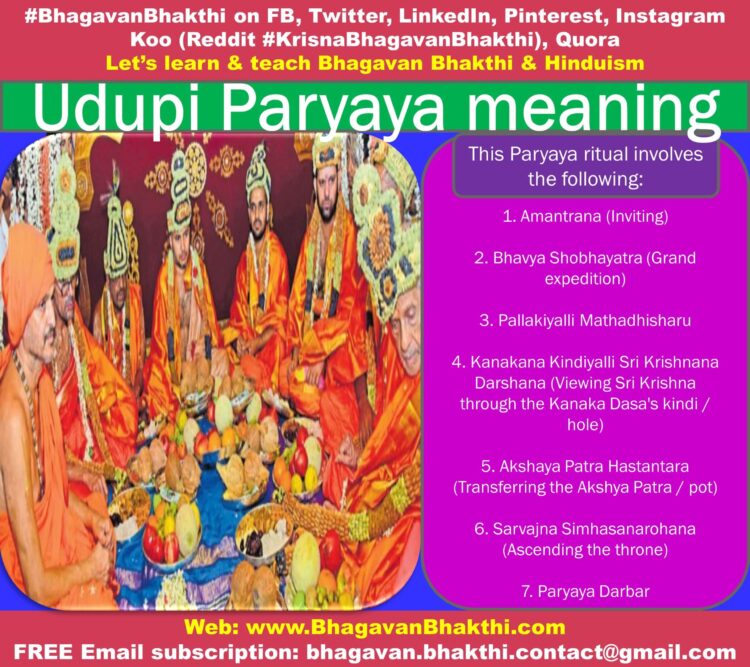 Earlier, Paryaya was taking place once in two months, but later it was changed to once in two years by Sri Vadiraja Teertha Ji.

In the temple town of Udupi, the land of Sri Madhvacharya Ji, Paryaya festival is held around Makara Sankranti period, that is on this sacred day Sri Madhvacharya Ji installed the deity of Bhagavan Sri Krishna (Sri Bala Krishna) at Udupi Kshetra, Karnataka.

Lakhs of people from across the country gather on this auspicious occasion to witness the unique ceremonies. Paryaya indicates the change of guard at Udupi Sri Krishna temple every alternate year, that is, every two years.

The Swami Ji who is to take charge of the Krishna Mutha goes to a place called Danda Tirtha about 10 km south of Udupi on the previous night.

This is the same place where Sri Madhvacharya Ji was studying during his childhood. To irrigate the gardens of his teacher he had made canal through his ritual-stick. That pond came to be known as ‘dandateertha’.

At about 3:00 a.m. after midnight, the Swami Ji gets up and bathes in the divine pond and starts towards Udupi.

At about 4:00 a.m. he reaches the outskirts of Udupi and a huge crowd of devotees welcomes the new Swami Ji at a place known as ‘joodu katte’.

The other Swami Jis of Udupi, excepting the one who is to hand over the charge, assemble there.

The Swami Ji who is to hand over the charge stays back at the Sri Krishna Matha to welcome the new Paryaya Swami Ji there.

The route from the joodu katte to the car street is decorated with garlands and lights. 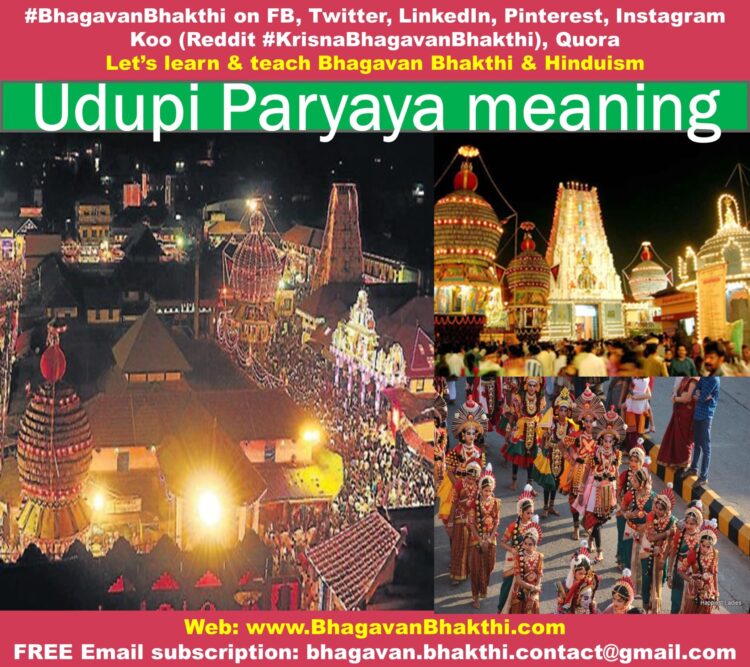 All the surrounding buildings will be illuminated. The arcs and garlands representing different traditions of preceptors provide an unbelievable appearance of the place.

Various kinds of drums, trumpets and musical instruments are played. The sound reaches the sky and enlivens the entire place.

As soon as the Parayaya Swami Ji reaches the joodu katte, the other Sanyasis (Pontiffs) and the devotees assembled there welcome the the new Swami Ji who is now going to have the good fortune of serving Bhagavan Sri Krishna for the next two years.

The Swami Jis who come to welcome the new Paryaya Swami Ji are well dressed with silken shawl and silken headdress.

Later, all of them sit on their palanquins. The idol of the deity of the would be Paryaya Matha is placed in a palanquin and takes at the head of the procession.

The entire route is very well decorated. The trained elephants with howdah on their back and slowly waving fan-like ears go in the front row of the procession.

This is followed by different kinds of tableaux and decorated staffs and arcs. Troupes of singers and pipers participate in the grand and divine procession.

The vehicles carrying the deities as well as the singing and dancing in ecstasy, the priests chanting the hymns from the Vedas, the idol of the Matha in a well decorated golden palanquin and the Swami Ji in a well decorated palanquin-all these produce the image of a grand pageantry.

Thousands and Lakhs of people come in flocks and gather on both sides of the streets as well as the balconies of the houses en-route to witness this historic scene.

The procession moves slowly and covers about 1 km distance in about two hours. 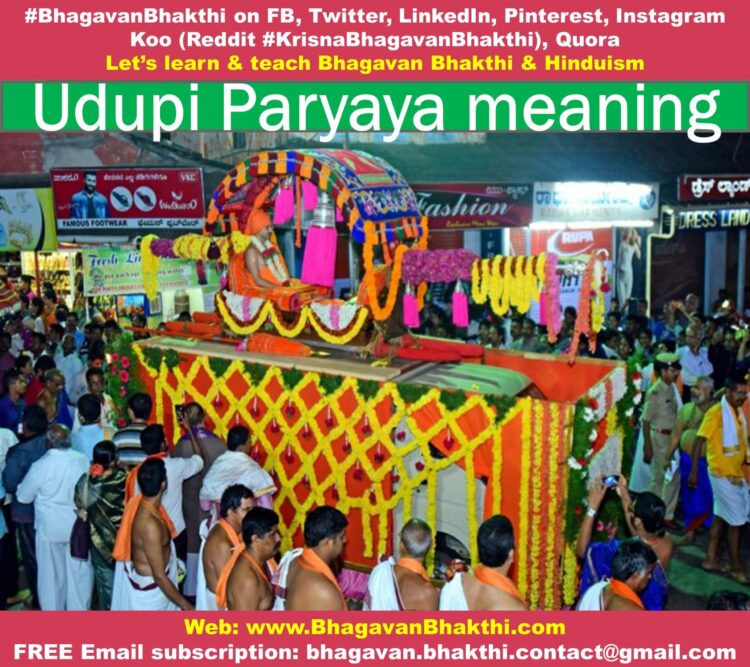 On reaching the car street the Swami Jis get down from the palanquin. They walk on the white cloth spread on the road. They circumambulate the car street and reach the Sri Krishna Mutha.

The Swami Ji does the namaste to the deity of Bhagavan Sri Krishna through the ‘Kanakana kindi’ (Kanaka Dasa’s hole).

The priests pray the nine planets and offer donations of grains and money to learned Brahmins to appease the planets. From there the Swami Ji goes to the temple of Sri Chandreshwara (Lord Shiva temple) and Sri Ananteshwara (Bhagavan Sri Vishnu temple).

At the entrance of Sri Krishna Mutha, the out-going Swami Ji receives the new Swami Ji and leads him inside by holding his hands. They first descend to the Madhva Sarovara (pond), wash their hands & feet and enter the sanctum sanctorum.

When the two Swami Jis enter the sanctum sanctorum, the other Swami Jis proceed towards the building known as Badagu Malige, sit on their decorated seats and wait for the Paryaya Swami Ji.

The Swamiji enters the Matha and places his box of deities in the teertha mantapa and does the arati / pooja. 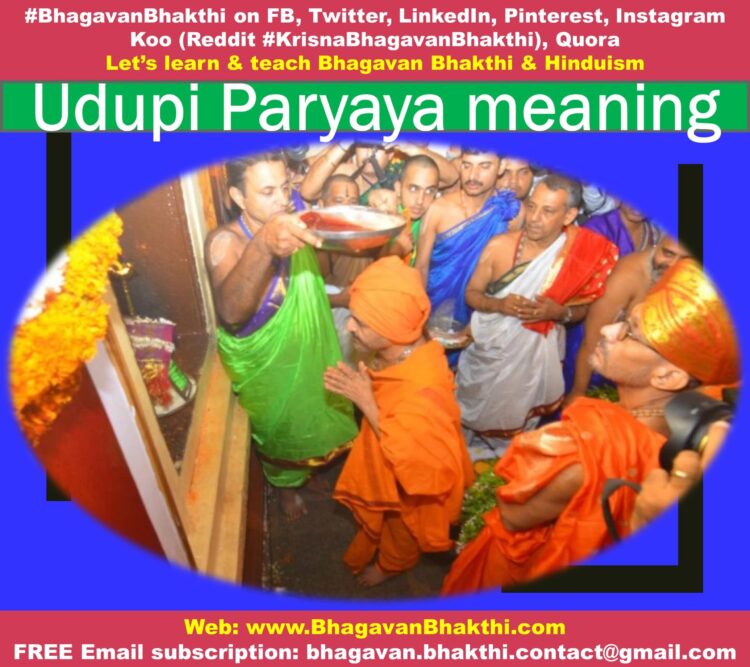 Then both the Swami Jis enter the sanctum sanctorum and pray before the deity.

They also pray before the deity of Mukhya Prana (Hanuman) and prostrate before the deities of Bhagavan Sri Krishna, Sri Mukhyaprana and Sri Garuda at the Chandrashala hall.

Later, the important ritual of handing over the charge takes place in the room known as simhasana.

Only a few officials of the Matha participate in this ritual transfer of powers.

The new Paryaya Swami Ji places the box of deities in the divine seat and does arati / pooja.

Then the outgoing Paryaya Swami Ji sits on the seat of Sri Madhvacharya Ji and takes the would be Paryaya Swami Ji by his side and honors him by offering the Gopichandana (divine Sandalwood paste) and other objects of honour.

The next item in the programme is to ascend the simhasana / throne.

The outgoing Paryaya Swami Ji gets up from the seat of Sri Madhvacharya Ji, holds the hands of the new incumbent and makes him sit on the seat. He then himself sits down by his side.

Soon after the ascent the Swami Ji is officially known as the Paryaya Swami ji.

The Swami Jis of the eight Mathas get very few such occasions of occupying this sacred seat sanctified by the association of the great Sri Madhvacharya Ji himself.

From the moment the Swami Ji occupies this seat, he directs all activities and rituals as the representative of Sri Madhvacharya Ji.

Transfer of the Akshaya Patra 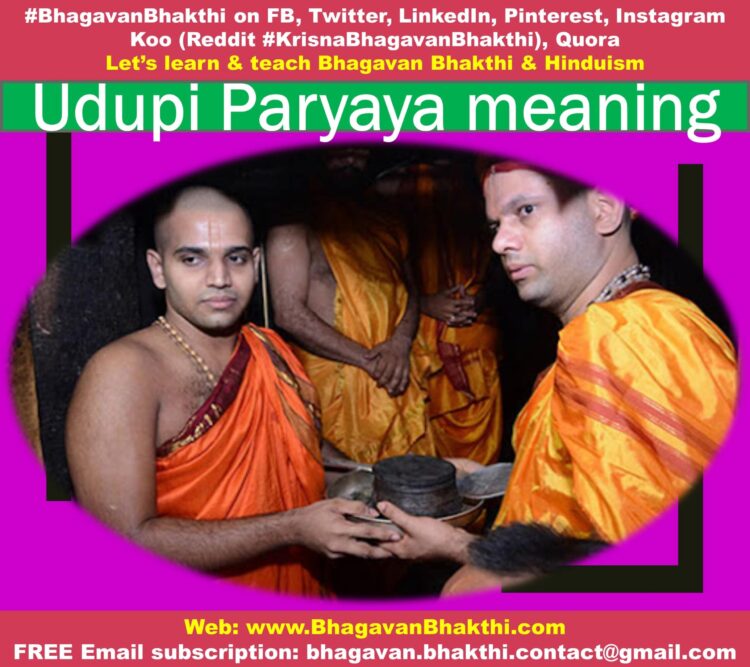 After exchanging the seats, the two Swami Jis enquire about each other’s welfare and go towards the deity of Sri Madhvacharya Ji at the entrance of the sanctum sanctorum.

They offer afghan water to the Archery. The outgoing Swami Ji hands over the Akshaya Patra the age-old vessels preserved from the time of Sri Madhvacharya Ji, its ladle as well as the keys to the shrine.

With this ritual the management of Sri Krishna Matha is officially transferred to the new Paryaya Swami Ji.