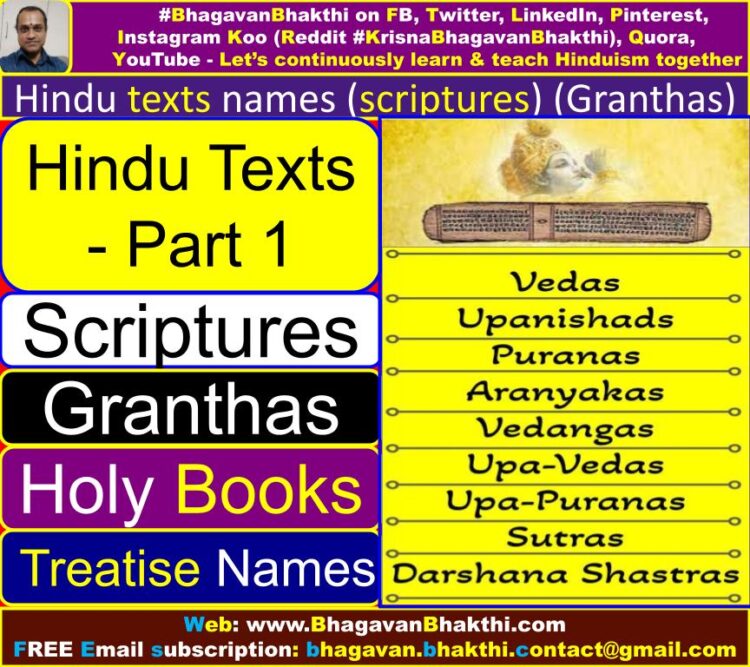 These authentic texts (scriptures) (Granthas) (Holy books) (treatise) of Sanatana Dharma (Hinduism) were written by Lord Sri Vishnu himself, few of them were composed by other Rishis and Devatas (Demigods) as per instructions of Lord Sri Vishnu.

In this post (article), you can get the knowledge about the names and it’s basic meaning of the Hindu texts (scriptures) (Granthas) (Holy books) (treatise).

List of Hindu texts names (scriptures) (Granthas) (Holy Books) (treatise) – Part 1 are as given below:

Vaidya means the physician or doctor, who has gained knowledge about medicines reading and understanding these great and divine Vedas.

Vedas are sub-divided into four parts (names) as given below:

The Rig Veda consists of the Brahmanas, Samhita, Brahmanas, Upanishads and Aranyakas.

In Sama Veda, sāman means song and Veda means knowledge, that is, Sama Veda relates to the melodies and chants.

The Sama Veda contains the Chants, that is, it is known as the “storehouse of knowledge of chants“.

Upanishads are sub-divided into 108 parts (names) as given below:

The name Isha Upanishad is derived from the Sanskrit terms īśā + vāsyam, that is, Lord + Enveloped = enveloped by the Lord or concealed in the Lord.

The Isha Upanishad explains about the the Atman (Self) theory, and is by and large described by both Dvaita Siddhanta (dualism) and Advaita Siddhanta (non-dualism) schools of Vedanta.

This divine Kena Upanishad is notable in its discussion of Brahman (Lord Sri Vishnu) with saguna (attributes) and nirguna (without attributes).

It shows the efficient cause of all the Devatas (Demigods), symbolically envisioned as forces of Brahman (Lord Sri Vishnu).

In Katha Upanishad discusses about the conversation between Nachiketa and Lord Sri Yama Deva in regarding to the nature of manushya (human), gyan (knowledge), atman (self) and moksha (liberation).

This Prashna Upanishad has six Prashna (questions), and each is a chapter with a discussion of answers of these all six questions.

Each and every chapter ends with the phrase, prasnaprativakanam, which means, ‘thus ends the answer to the question.

Mundaka Upanishad is presented as a conversation between great Rishi Saunaka and Maharishi Angiras.

But, we should note that, these mantras are not used in daily or special rituals or ceremonies, rather they are used for teaching and meditation on spiritual knowledge only.

The Mandukya Upanishad is the shortest form of all the Upanishads.

The Taittiriya Upanishad includes verses as given below:

Partial prayers and benedictions, partial instruction on phonetics and praxis, partial advice on ethics and morals given to graduating students from ancient Vedic Gurukuls, partial information about treatise on allegory, and partial philosophical instruction.

Aitareya Upanishad gives clarification about three philosophical themes as given below:

First, the universe and human is the creation of the Atman; second, the theory that the Atman undergoes multiple births; third, the consciousness is the essence of Atman.

Chandogya Upanishad is one of the largest Upanishad and has eight Prapathakas (chapter of lectures), and each chapter has multiple volumes, and each volume contains many verses.

It talks about atma (soul) and its four avasthas (consciousness states) and four seats, that is –

The seats for the purpose of achieving Dhyana (mediation) of the Nirguna Brahman (Lord Sri Vishnu). It is presented as a conversation between Rishi Pippalada and Rishi Shaunaka.

Kaivalya Upanishad is a part of the collection of the Vedanta literature that presents the philosophical concepts of Sanatana Dharma (Hinduism).

Also, Kaivalya Upanishad discusses about atman (self) and its relation to Brahman (Lord Sri Vishnu), and self-knowledge as the path to Kaivalya (Moksha / liberation).

Jabala Upanishad discusses about the subject of renouncing the material life for the exclusive pursuit of  adhyatmika gyan (jnana) (spiritual knowledge).

Likewise, Jabala Upanishad talks about the divine city of Varanasi (Kashi) in spiritual terms, as Avimuktam.

Similarly, Jabala Upanishad explains about how that city of Varanasi (Kashi) became holy, then also adds that the holiest place to revere is one within the atman (soul and / or self).

The Shvetashvatara Upanishad openly talks discusses about the metaphysical questions about the primal cause of all existence, its birth, its end, and what role, if any, time, nature, necessity, chance, and the spirit had as the primal cause.

Hamsa Upanishad is structured as a discourse between Maharishi Gautama and the divine Sanatkumara, on the knowledge of Hamsa-vidya as a prelude to Brahmavidya.

Hamsa Upanishad explains the divine sound of ॐ (ōṁ), its relation to Hamsa (Hansa), and how meditating on this prepares one on the journey towards realizing Paramahamsa (Sannyasi / Sanyasi).

Aruneya Upanishad explains about the cultural phenomenon of a Sannyasi (Sanyasi), that is, about a Hindu Monk, a practitioner of Sannyasa Ashrama or renunciation.

The Aruneya Upanishad also describes the attributes and lifestyle of a Paramahamsa (Sannyasi / Sanyasi / Hindu Monk), who has achieved the highest state of adhyatmika gyan (jnana) (spiritual knowledge).

The Garbha Upanishad is among the Upanishad that exclusively comments on medical and physiology-related themes.

This texts deals with the theory of the formation and development of the manushya bhrinam (मनुष्य भ्रूणम् / human embryo) and human body after birth.

This divine Narayana Upanishad was recited by Lord Sri Rama to his greatest devotee Hanuman.

The Narayana Upanishad asserts that “Om Namo Narayanaya“, an ashtakshari mantra (eight-syllabled mantra), as a means of reaching Moksha (salvation), which is communion with Lord Sri Vishnu.

It is categorized as one of the Sannyasa (Sanyasa) Upanishads. According to Sri Madhwacharya Ji, Paramahamsa is one of the avatars of Lord Sri Vishnu himself.

In this avatar of Paramahamsa, Lord Sri Vishnu imparted Vedas to Lord Sri Brahma Deva in the form of Divine Swan (Hamsa / Hansa).

The Paramahamsa Upanishad is a discourse between the Lord Sri Brahma Deva and Maharishi Narada.

The Paramahamsa Upanishad explains a Sannyasi (Sanyasi / monk) as a Jivanmukta (a liberated soul) while alive, and Videhamukta is liberation in afterlife.

The Amritabindu Upanishad condemns the bookish learning and give importance on continuous practice, as well as for presenting a six limbed Yoga system.

Sometimes, this Upanishad is also known as ‘Amrita-Nada-Bindu Upanishad‘. In Sanskrit it is written as अमृतनादबिन्दोपनिषद् (amr̥tanādabindōpaniṣad).

This texts compares both to the ॐ (ōṁ) symbol and the Samkhya (Sankhya) theory of three Gunas.

Also, this scriptures asserts true Yoga involves meditation and renunciation from all attachments to material things.

The Atharvashikha Upanishad is composed via the voice of the Rishi Atharvan, to whom the Atharva (Atharvana) Veda is excessively attributed.

The word Atharvashikha = Atharva + Shikha = Tip of the Atharvan. Shikha also means “a particular hymn or formula” and “jata (जटा)“.

This texts mainly deals with the concept and nature of Atman (Self), the question of “how is joy possible?” and “how one can achieve Moksha / Mukti (liberation)?”.

This Kaushitaki Upanishad talks about rebirth and transmigration of Atman (Self), life is affected by Karma, and then it also discusses whether there is Moksha (liberation) and freedom from the cycles of birth and rebirth.

This text explains the process of producing Vibhuti (Bhasma) (sacred ash), methods of using it for Tilaka Tripundra on various parts of the body, and its meaning. The text also mentions Rudraksha as prayer beads.

The text Nrisimha Tapaniya Upanishad is noteworthy which affirms a fourfold identity, that Atman (soul, self) is same as the below:

The Kalagni Rudra Upanishad is a dialogue by Kalagni Rudra (Lord Shiva) to Sanatkumara about Tripundra, that consists three horizontal lines of sacred ash on the forehead.

The Maitreya Upanishad clarifies the renunciation and self-knowledge is the path to Moksha / Mukti (liberation).

Rishi Maitreya says in this Upanishad that, “the Lord (Lord Sri Vishnu) is within the heart of each person, he is the witness of all, and the object of the ultimate love“.

The Subala Upanishad text along with the Mudgala Upanishad, are the two Upanishads that talks about the Purusha Sukta of Rigveda.

Both Subala Upanishad and Mudgala Upanishad authenticates that Lord Narayana (Lord Sri Vishnu) is the one and only Brahman (Highest Reality, Supreme Personality).

In the divine language of Sanskrit, the word Kshurika means ‘razor‘, and in Kshurika Upanishad, it signifies Yoga (Yogasana) being a tool to cut oneself away from Maya (illusion) and errors.

The Kshuruka Upanishad includes different sections on Yoga postures, Pranayama (breath exercises) and withdrawal of senses from outside to inside as a means to cleanse the body and mind.

The aim of Yogasana as per Kshurika Upanishad, is to know and liberate one’s atma (soul).

The Mantrika Upanishad contains 21 verses. It attempts a syncretic but unsystematic formulation of ideas from Samkhya (Sankhya), Yoga, Vedanta and Bhakti (devotion).

This text of Sarvasara Upanishad is composed in the style of glossary of Vedanta terms.

The Sarvasara Upanishad begins by listing twenty three questions. For example, what is Moksha (Liberation), what is Avidya (Ignorance) and what is Vidya (Knowledge)? etc.

Later, Sarvasara Upanishad gives the answers for all the twenty three answers.

In the Niralamba Upanishad, it is said that that all men, women, all living beings, Hindu Deities such as Lord Sri Vishnu, Lord Sri Brahma Deva, Lord Sri Rudra Deva (Shiva), Lord Sri Indra, etc. are in their essence just the same ultimate reality that is, Brahman.

The Vajrasuchi Upanishad informs that there are four varnas, that is, the Brahmana (Brahmin), the Kshatriya, the Vaishya and the Shudra.

The Brahmana (Brahmin), is declared by Smriti to be chief. But the inside meaning is, this social division is justified by Jiva (life, soul), Jnana (gyan) (knowledge), Karma (deeds), Dharmic (virtues) and not at all by birth.

The Tejobindu Upanishad does not encourage the scriptural studies, but rather encourages the practice of practical meditation.