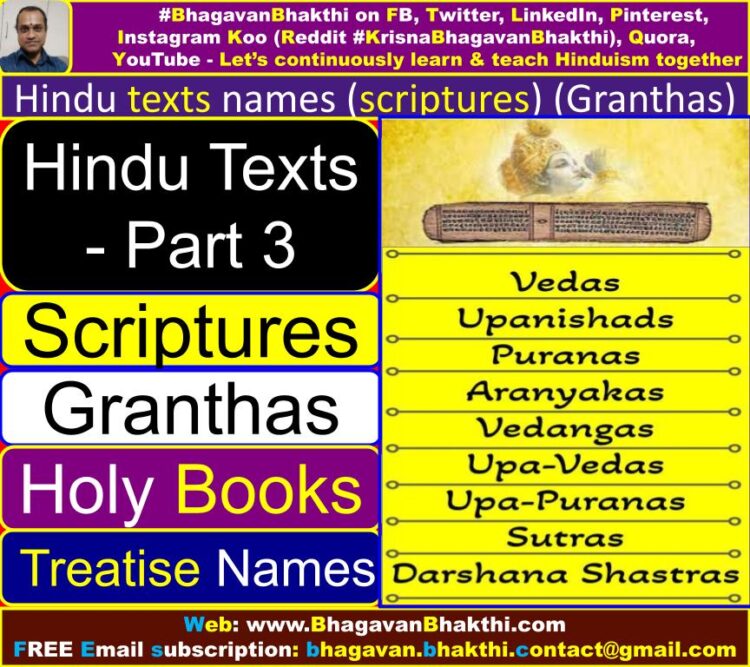 This Upanishad talks about the invocation to Brahman, the Supreme Reality for the welfare of all parts of the body, the prana (spirit), and speech.

Rudrakshajabala Upanishad is devoted to the Rudraksha (A sacred seed, which is auspicious to the Lord Shiva.

This Upanishad asserts that Lord Ganesha as the ultimate reality, Brahman.

Lord Ganesha is explained as the ultimate truth and reality (Brahman), as Satchidananda, as the soul in oneself (Atman) and in every living being, as ॐ (ōṁ) in this Upanishad.

The Darshana Upanishad presents a amalgamation of Hatha Yoga and eight limbed Patanjali Yogasutras methodology, on a foundation of Vedanta and Yoga philosophies.

This Upanishad is designed as a discourse by Lord Sri Dattatreya to Rishi (Sage) Sankriti on Yoga.

This Upanishad mainly discusses about ॐ (ōṁ) for yogic meditation as Taraka or that which helps one cross from material world into spiritual life.

This text indicates “ॐ नमो नारायणाय” (Om Namo Narayana) (ōṁ namō nārāyaṇāya) mantra and also talks about the ॐ (ōṁ) mantra, and amalgamates into its sound with the following characters of the epic Ramayana –

Mahavakya Upanishad explains the nature of Atman (self, soul) and Brahman (Supreme reality), then also adds that they are identical and liberation is the state of fully understanding this identity.

And also recommends on the meditation on “सोहम्” (sōhaṁ) or “I am he, He is I am” to achieve Moksha (liberation).

The Pranagnihotra Upanishad talks about the universal Atman (soul) (God) is within one self, all Vedic Devatas (Demigods) are embodied in the human body giving one various abilities.

This text gives importance for its lifting metric structure, its mention of ancient cultural elements like musical instruments and embedded philosophical premises.

This Upanishad is one of the most cited texts in later Bhasyas (commentaries) by great saints from the diverse schools of Sanatana Dharma.

This text explains the state and expected conduct from a Sannyasi (Sanyasi) (Hindu Monk) as he leads the ascetic life after renouncing all material and social ties.

The Varaha Upanishad mainly structured as a conversation between Lord Sri Varaha (Vishnu avatar) and the Rishi (Sage) Ribhu.

The conversation contains the subjects like Tattvas, the nature and relationship between the individual Atman (Self) and Brahma (Supreme Reality), the seven stages of learning, the characteristics of Jivanmukti (inner sense of freedom while living), and the four types of Jivanmuktas (liberated persons).

This text gives importance about the Sannyasa and emphasizes about the non-dualism, same renunciation rites and outlook, the use of yoga, meditation on ॐ (ōṁ) and Brahman, pursuit of living liberation.

This text also adds information about the virtuous simple life that journeys towards and with self-knowledge calling Lord Sri Vishnu as the “very self, and into whom the renouncers enter and get liberated“.

This Upanishad is narrated by Lord Sri Brahma Deva to Devarishi (Sage) Narada.

This text is is a minor Upanishad, devoted to Lord Sri Hayagriva (Horse faced avatar of Lord Sri Vishnu).

The Dattatreya Upanishad is a Tantra work and presents a mantra that is the most popular mantra in Dattatreya tradition.

This Upanishad describes that the worship of Lord Sri Vishnu (Narayana) and Lord Sri Dattatreya (An avatar of Vishnu) leads one to the nature of Truth-Bliss-Knowledge.

This text has mantras and charms that are said to cure problems related to poison.

The Garuda Upanishad talks about the charms that not only can prevent the snakebite, but also poisons related to other poisonous animals, weapons and supernatural beings.

The text gives importance about presenting the Pashupata theology.

Jabala Upanishad describes about Pashu and Pata means and also about the Vibhuti (ash) on one’s forehead.

This text explains the ideas through Goddess Sri Lakshmi Devi.

The Upanishad talks about the true wealth, and then later introduces Yoga for spiritual attainment away from material expectations and towards inner wealth.

This text eulogizes the female part as the Shakti (power) and as the Brahman, and extensively uses a combination of devotion and Vedanta terminology.

This text explains that Atman (Self) is a Devi (Goddess) who alone existed before the creation of the universe.

Upanishad asserts that Devi (Goddess) is the Supreme power, she is the Brahman (Supreme reality).

In this Upanishad, Lord Sri Rama gives a list of all the 108 Upanishads names to Hanuman.

Since it is derived from the Sanskrit word Aranya (अरण्य) (araṇya), it is called as Aranyaka (āraṇyaka).

In Sanskrit Aranyaka (āraṇyaka) means “something produced or belongs or born or started or inside a forest“.

The Aranyakas (āraṇyaka) are the part of the ancient Indian Vedas concerned with the meaning of ritual sacrifice.

Aranyakas (āraṇyaka) basically typically represent the later sections of the Vedas, and are one of many layers of the Hindu Vedic texts.

Aranyakas (āraṇyaka) are typically identified as कर्मकाण्ड (Karma Kanda), that is, basically these texts are used in daily ritualistic or sacrificial works.

And on the other hand, the Upanishads are typically identified as ज्ञानकाण्ड (Jnana / Gyan Kanda), that is, basically these texts are used in knowledge or spiritual works.

This Aitareya Aranyaka was written by Aitareya Mahidasa, that is, an avatar of Lord Sri Vishnu himself.

This Aranyaka contents in the Maha Vrata, Prana, Agnihotra ritual, results of prayer, etc. This is also called as Kaushitaki Aranyaka.

This Aranyaka discusses about the eight Kathaka sections and mostly deal with varieties of the Agnicayana ritual.

The different types of Vedangas are as given below:

4(1). Shiksha : The first type of the Vedanga is called as Shiksha. Shiksha gives importance to ध्वनि शिक्षा (dhvani śikṣā), that is, phonetics, pronunciation.

This Vedanga deals with the letters of the Sanskrit alphabet, accent and rules of euphonic combination of words during a Vedic recitation.

4(2). Chandas : This type of Vedanga gives importance to the poetic meters, including those based on fixed number of syllables per verse.

The use of this Vedanga is about reading and reciting of the Vedic hymns. The Chandas discusses the number of syllables in texts and poems which is linked to meter.

This Chandas part is often referred to as the feet of the Veda Purusha (Lord Sri Vishnu).

4(3). Vyakarana : This deals with the grammar and linguistic analysis of the Sanskrit language to establish the exact form of words and sentences to properly express ideas.

Vyakarana is called the mouth of the Veda Purusha (Lord Sri Vishnu) and is also seen as crucial for understanding the Vedas.

4(4). Nirukta : Nirukta deals with the etymology of the Sanskrit language and also handles the explanation of words, especially those that are classical in nature and have ancient uses with unclear meaning.

This part of the Vedanka (Nirukta) is called as the ears of the Veda Purusha (Lord Sri Vishnu).

4(5). Jyotisha : Jyotisha is very important part of Vedangas which discusses about the right time for rituals with the help of position of nakshatras and astronomy.

Jyotisha is not about the teaching of astronomy, but the use of astronomy like to fix the appropriate time, day, etc. for the sacrifice(s).

Jyotisha is known as the eye of the Veda Purusha (Lord Sri Vishnu).

4(6). Kalpa : This deals with the ritualistic instructions. This field gives importance about the standardizing procedures for Vedic rituals.

For example the rites of passage rituals associated with major life events like birth, wedding and death in family.

Also, this Vedanga discusses about the personal conduct and proper duties of an individual in different stages of his life.

Kalpa is known as the arms of the Veda Purusha (Lord Sri Vishnu).

5. Smriti : In Sanskrit Smriti is written as स्मृति (smr̥ti). Smriti in Sanskrit means remembering or in simple word called as “memory“.

The smritis aim at outlining and giving a picture of how to “live a happy and satisfied life” in a way to fulfill the purpose of life, thus make life meaningful.

Manusmriti, in Sanskrit is called as “Manava Dharma Shastra” (The Dharma Text of Manu). Traditionally the most authoritative of the books of the Hindu code (Dharma-shastra) in India.

6(1). Ayurveda : In Sanskrit Ayurveda is written as आयुर्वेद (āyurvēda). This is associated with Rig Veda.

In Sanskrit धनुर् (dhanur) means archery and वेद (vēda) means “knowledge“, that is, Dhanurveda deals with the “Science / knowledge of archery”.

In Sanskrit Gandharvas are the group of Devatas (Demigods) who are related with Singing and Dancing. Gandharvaveda = गन्धर्व (gandharva) + वेद (vēda).

7. Itihasa (Epics) : In Sanskrit Itihasa is written as इतिहास (itihāsa). These are called as Itihasa (history) as it showcases India’s past.

8. Sutras : In Sanskrit Sutra (Sutras) is written as सूत्र (sūtra).

The Brahma Sutras primarily discusses about the nature of human existence and universe, and ideas about the metaphysical principle of Brahman (Supreme Reality).

The Narada Bhakti Sutra is a famous text and is reportedly spoken by the famous Devarishi (Sage) Narada.

The text narrates about the process of bhakti (devotion) or Bhakti Yoga and is thus this text is highly important in the Bhakti movements, especially among the Vaishnavas.

8(5). Samkhya Sutra : In Sanskrit it is written as संख्या सूत्र (sāṅkhya sūtra)(sāṁkhya sūtra).

Samkhya Sutra is also called as “Samkhya Pravachana Sutra“. It was first composed by Rishi (Sage) Kapila, an avatar of Lord Sri Vishnu.

Samkhya Sutra explains about the philosophy of the Samkhya school knowledge.

Shiva Sutras mainly deals with an arrangement of the sounds (14 sounds) for the purposes of grammatical exposition as carried out by the grammarian Pāṇini in the Aṣṭādhyāyī.

Lord Shiva sounded his drum fourteen times to reveal these sounds to Pāṇini.

The Vaisheshika Sutra presents the theories on the creation and existence of the universe using naturalistic atomism.

8(8). Yoga Sutras : In Sanskrit Yoga Sutra is written as योग सूत्र (yōga sūtra). This mainly deals with the Yoga Sutras given by Rishi (Sage) Patanjali.

The Yoga Sutras was compiled by the Rishi (Sage) Patanjali who synthesized and organized knowledge about yoga from much older traditions.