What is Hinduism and Hindutva difference

Hinduism is the one and only unique Dharma which is existing on this earth in today’s time. 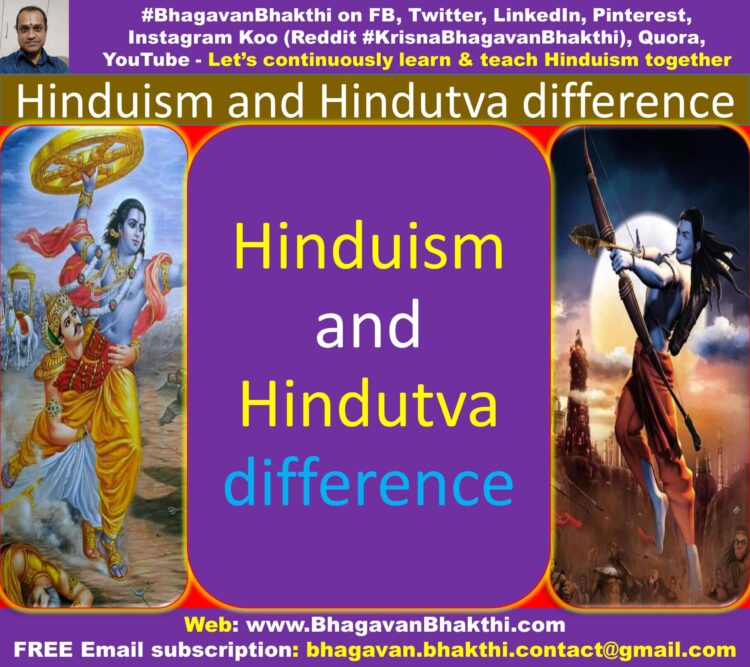 Sanatana and Sanatana Dharma doesn’t has one single meaning. It has infinite number of meanings.

Dear friends, we will forget the politics here. What politicians are talking is not at all important to us.

But for us, the meaning of Hinduism and Hindutva is the most important concept.

Let us take few examples from our divine Ramayana, Mahabharata, Puranas, etc. to understand both Hinduism and Hindutva.

Now let us know the difference between Hinduism and Hindutva as per Hindu Shastras (Ramayana, Mahabharata, Puranas, etc.)

List of Hinduism and Hindutva difference are as given below:

Hinduism : Here Lord Rama is invoking Lord Varuna. This was done by Lord Rama, so that Lord Varuna gives space for all the Vanaras (Monkeys) to cross the ocean to rescue Goddess Sita.

(Lord Varuna is the abhimani devata or controlling Demigod of ocean. Thus only with respect the Supreme Lord Rama requested for space to Lord Varuna.)

But Lord Varuna takes his own time to appear in front of the Supreme Lord Rama. This is Hinduism. 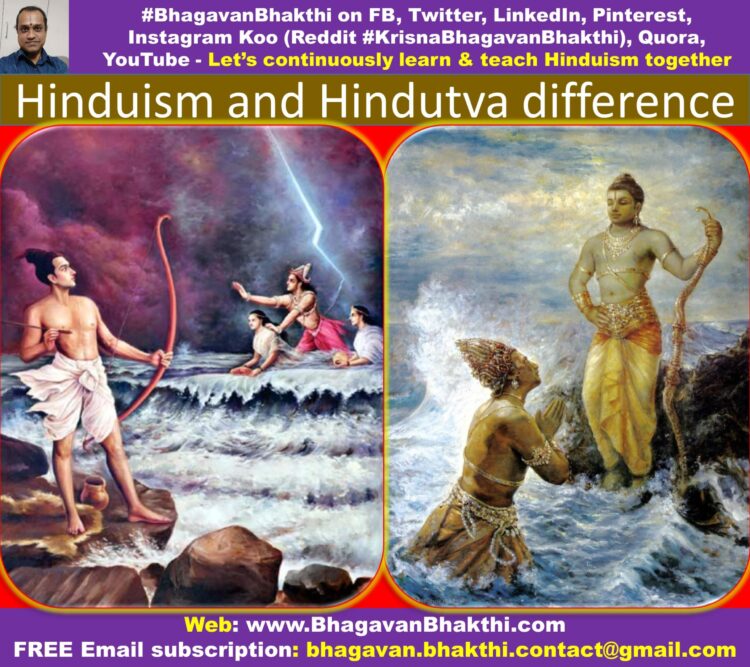 Thus, Lord Rama showed who is the Supreme Lord to Lord Varuna by aiming an arrow towards Lord Varuna.

This made Lord Varuna to be fearful and thus he appears in front of the Supreme and Almighty Lord Rama and ask for excuse and pardon. This is Hindutva.

Hinduism : The Almighty Lord Krishna had given promise to Shishupala’s mother Shrutashrava that, he will not harm Shishupala until he makes 100 mistakes. This is Hinduism.

(Thus Lord Krishna was a nephew of Shrutashrava and consequently the Supreme Lord Krishna and Shishupala were cousin brothers.) 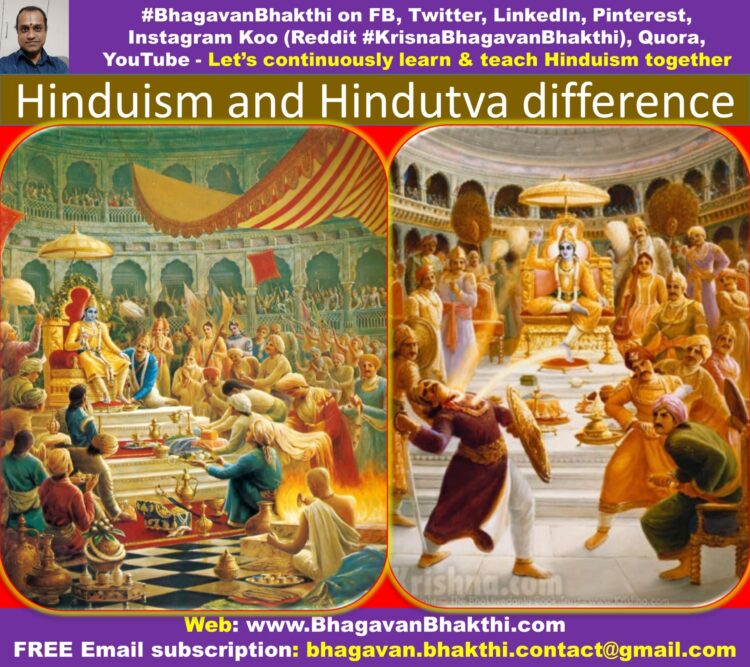 Hindutva : During the Yudhishthira’s Rajasuya Yagna, Shishupala gets brutally outrageous as all the assembled people unanimously accepted Lord Krishna as Supreme Lord.

Shishupala had crossed all his limits and also had crossed his 100 mistakes and had made the 101st mistake.

For this reason, the Supreme and Almighty Lord Sri Krishna beheads Shishupala head. This is Hindutva.

As per Lord Rama promised, Lord Rama kills the mighty Vali, Sugriva was made the king of Kishkindha. This is Hinduism. 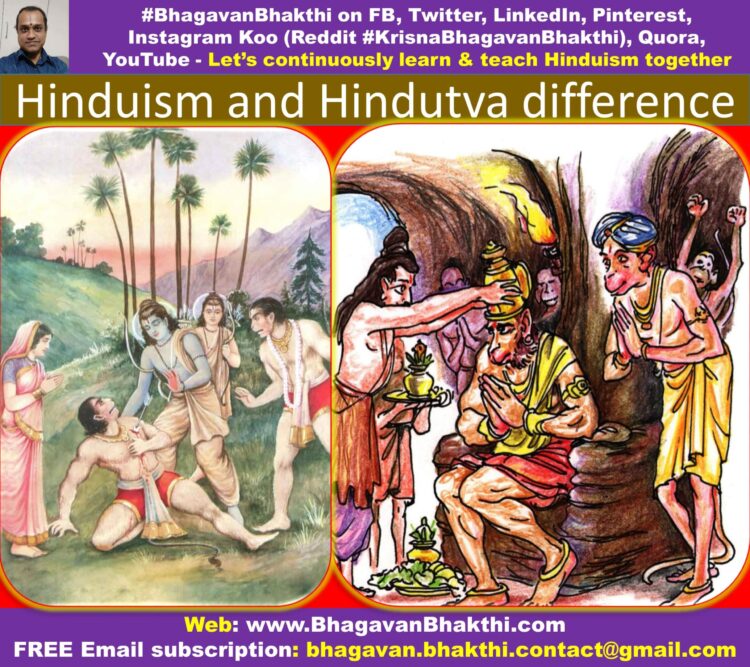 Hindutva : But Sugriva completely forgets his oath and promise, and was involved in material enjoyment with his wife Ruma.

Both Lord Rama and Lakshmana waits for 4 months, as it was Chaturmasam (Four months of rainy season).

But even after Chaturmasam, Sugriva doesn’t comes out of his kingdom, and was completely involved in material enjoyment with his wife Ruma.

This made Lakshmana to get angry against Sugriva and almost Lakshmana attacks Sugriva. This is Hindutva.

Hinduism : When Yudhishthira decides to do Rajasuya Yagna, he had to conquer all the kings of the world.

This was because, as Jarasandha was very powerful to conquer. This is Hinduism. 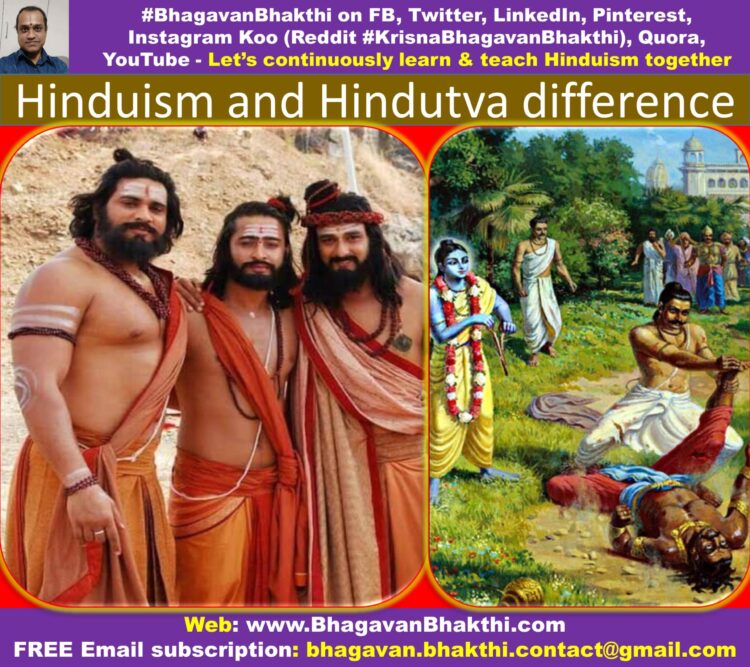 Hindutva : But Lord Krishna informs to Yudhishthira that, he can easily complete the Rajasuya Yagna, as Bhima was highly capable of defeating the mighty Jarasandha.

Lord Krishna goes to Magadha (Kingdom of Jarasandha) along with Arjuna and the great and mighty Bhima.

Lord Krishna invites Jarasandha to choose any of the three (Lord Krishna, Arjuna and Bhima) to fight. Jarasandha accepts Bhima to fight against.

Later, the great and mighty Bhima easily kills Jarasandha by tearing his body into two pieces as per the instructions of Lord Krishna. This is Hindutva.

Our great and mighty Hanuman immediately starts with his group. Hanuman reaches Lanka.

There he finds Meghanatha and they both fight. Finally Meghanatha aims the Brahmastra towards Hanuman.

But, because of respect to Lord Brahma Deva, Hanuman acts as if he has accepted the defeat.

(But Hanuman’s main motive was to go in front of Ravana and was wanting to discuss the Goddess Sita Devi abduction issue with Ravana.) This is Hinduism. 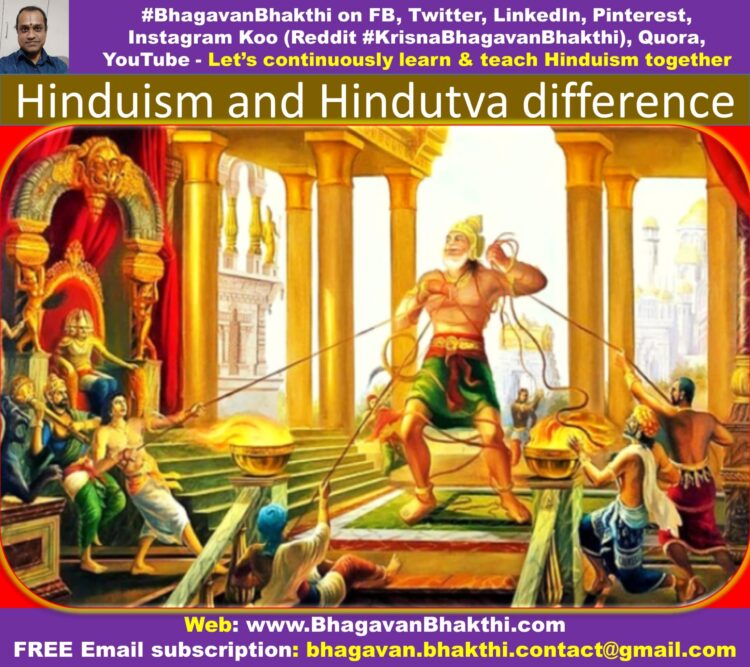 Ravana informs Hanuman that, he will not free Goddess Sita Devi and orders his people to set fire the tail of Hanuman.

(Fire can’t harm our great and mighty Hanuman, as he is an avatar of Lord Vayu Deva and he will be the next Lord Brahma Deva in the next Kalpa.)

Thus Hanuman thinks that he should teach a lesson to Ravana and his followers all over the Lanka.

Consequently, Hanuman sets fire almost 50% of the Lanka. This is Hindutva.

6. Bhima, Draupadi and Duryodhana & his brothers

Hinduism : Many of us know how cruel was Duryodhana. In the open assembly, Duryodhana and his brothers humiliate and dishonor Pancha Pandavas and Draupadi Devi.

But still, Bhima and his brothers won’t take any action in the assembly in respect of their elders. This is Hinduism. 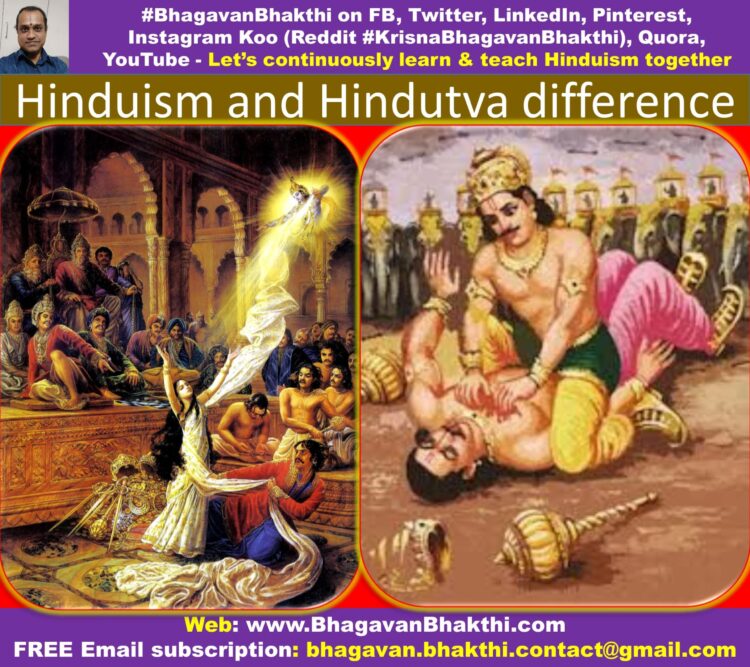 Hindutva : In the Kurukshetra war (Mahabharata war), the mighty Bhima kills all the 100 Kauravas including Duryodhana without a little bit of mercy. This is Hindutva.

Hinduism : Hiranyakashipu tries to kill his own son Prahlada in different ways. But Prahlada always respected his father.

In the same time, Prahlada never accepts his father Hiranyakashipu as Bhagavan / God.

Prahlada always tells his father that, the Almighty is none other than Lord Narayana (Vishnu) himself and no one is equal or above him. This is Hinduism. 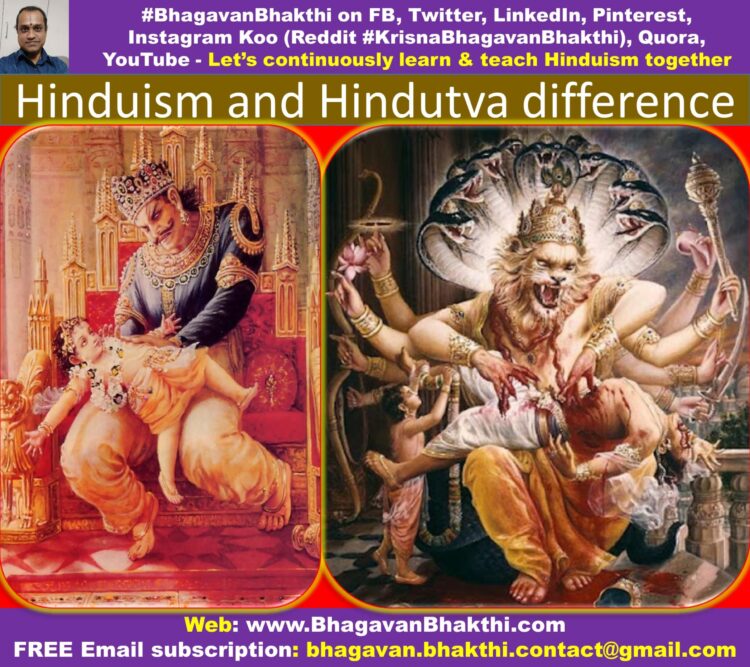 And consequently kills Hiranyakashipu with highest ease. This is Hindutva.

Hinduism : Lord Parashurama never killed all the Kshatriyas all over the world and also he never harmed any underage ill Kshatriyas.

Hindutva : But Lord Prashurama took 28 times to kill all the ill Kshatriyas.

Now, you may have the question, why did Lord Parashurama took 28 times to kill the ill Kshatriyas and why didn’t he killed in one time itself? 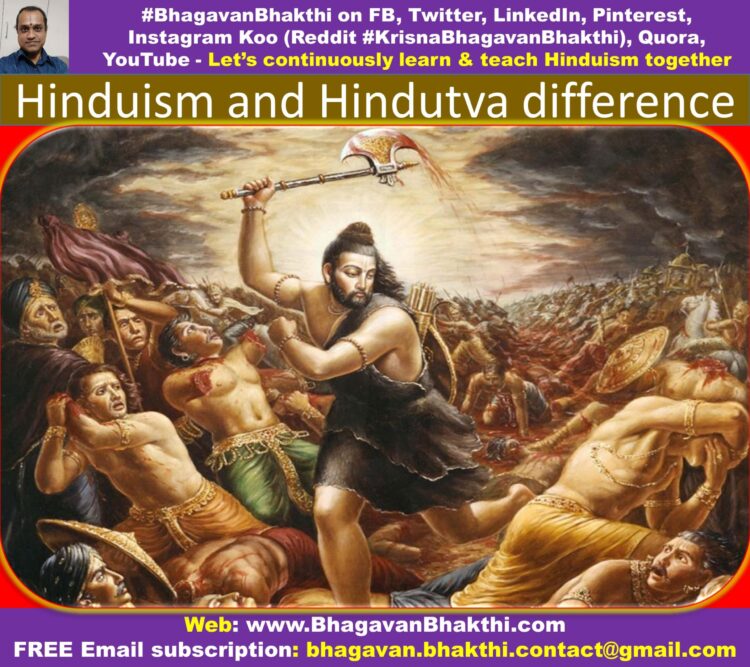 Answer – Lord Parashurama is an avatar of Lord Narayana (Vishnu) himself and follows multiple Dharmas, so that the common people can learn from him.

But, when ill Kshatriyas start to cause problems to Sadhus (Lord Vishnu devotees), and when they became adult, only then Lord Parashurama was killing only such kind of ill Kshatriyas.

Lord Parashurama was waiting for the ill Kshatriyas to grow up to an adult age.

Only after they were becoming adult, Lord Parashurama was killing such kind of ill and adult Kshatriyas.

Thus, it took 28 times to Lord Parashurama to kill all the adult and ill Kshatriyas. This is Hindutva.

Hinduism : Lord Narasimha (Vishnu) had promised Prahlada that, he will never kill Prahlada’s future lineage. This is Hinduism. 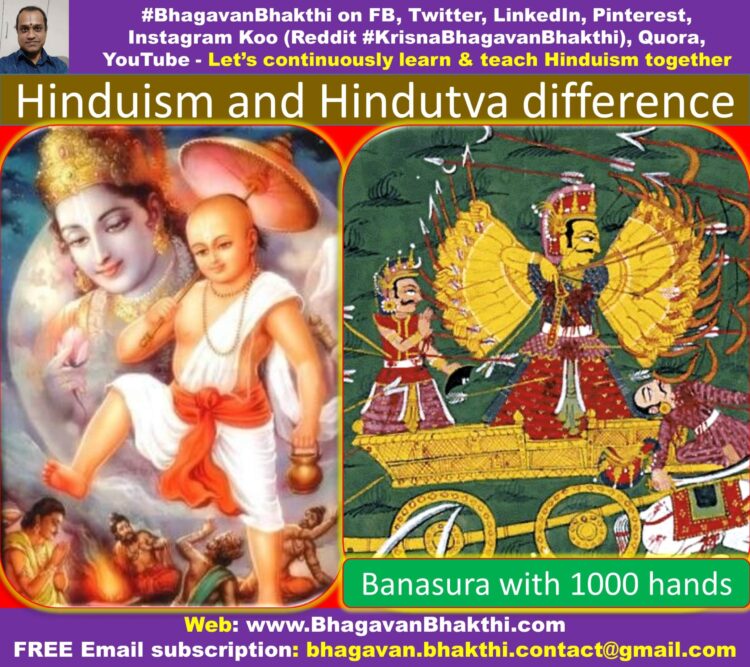 Hindutva : And off course, as Lord Vamana, he never harmed Bali Chakravarti even though he had made ill mistakes.

Also in the Lord Krishna avatar, Lord Krishna spared Banasura. Banasura belongs to the same lineage of Prahlada. This is Hindutva.

Hinduism : Kaliya snake was the son of Maharishi Kashyapa and Kadru Devi.

Even though he was the son of Maharishi Kashyapa, since his mother was Kadru, he had installed ill things.

Kaliya started to live in the Yamuna river and had also polluted Yamuna river. But still Lord Krishna didn’t harm this ill Kaliya. This is Hinduism. 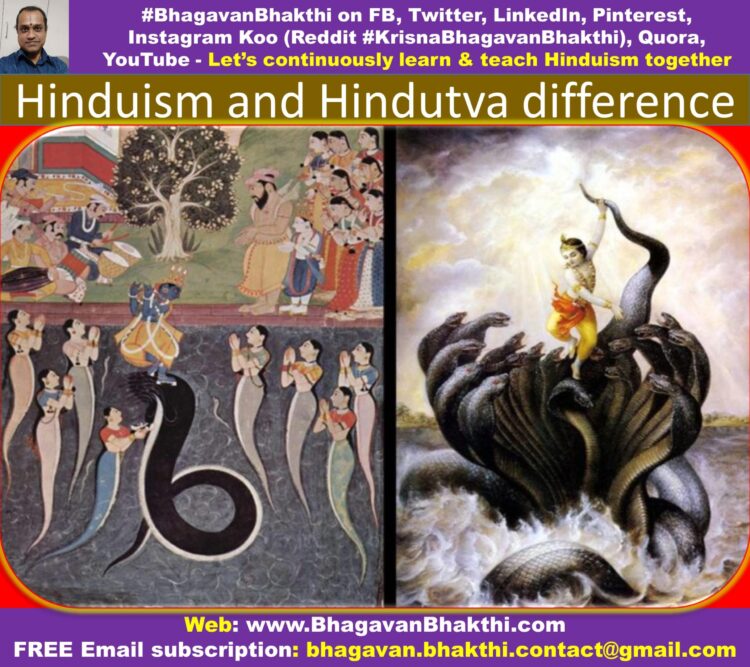 Lord Krishna will never tolerate if someone cause problems to his devotees.

But here, Lord Krishna spared Kaliya snake’s life, as his wives asked for pardon to Lord Krishna. This is Hindutva.

To know more information about Hinduism, please click the below link:

To know more information about Lord Krishna, please click the below link:

To know more information about Lord Rama, please click the below link: