Contribution of ancient India in science and technology

Dear friends, today let us know a list of the great and famous people who belonged to India (Hindus), who have contributed in the field of Science and Technology. 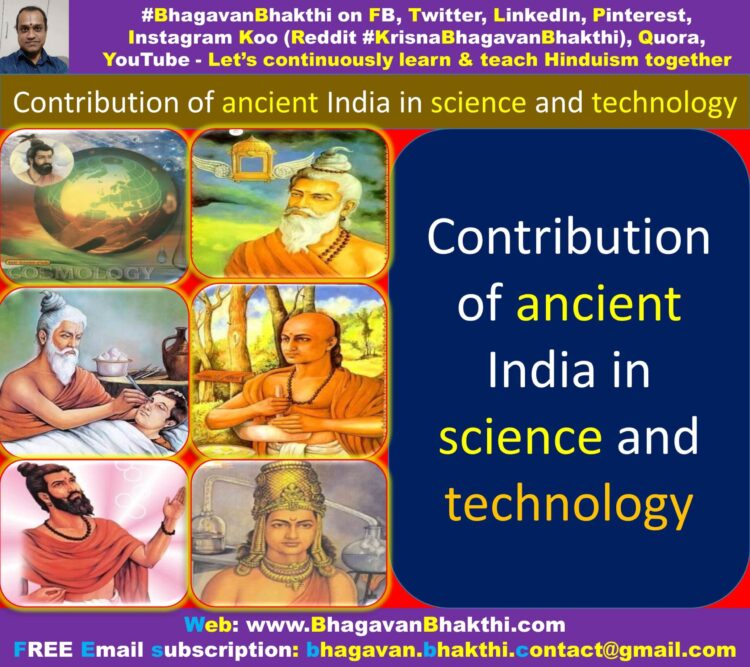 First, let us know the list of the names with basic information about such people from Indian.

Later below, we will learn more information about those great and famous people and their contribution in their respective fields of Science and Technology.

List of the “contribution of ancient India in science and technology” are as given below:

Now, let us more more information about the above great people of India (Hindus) who have contributed in the field of Science and Technology.

Below given are the more information about the “Contribution of ancient India in science and technology”: 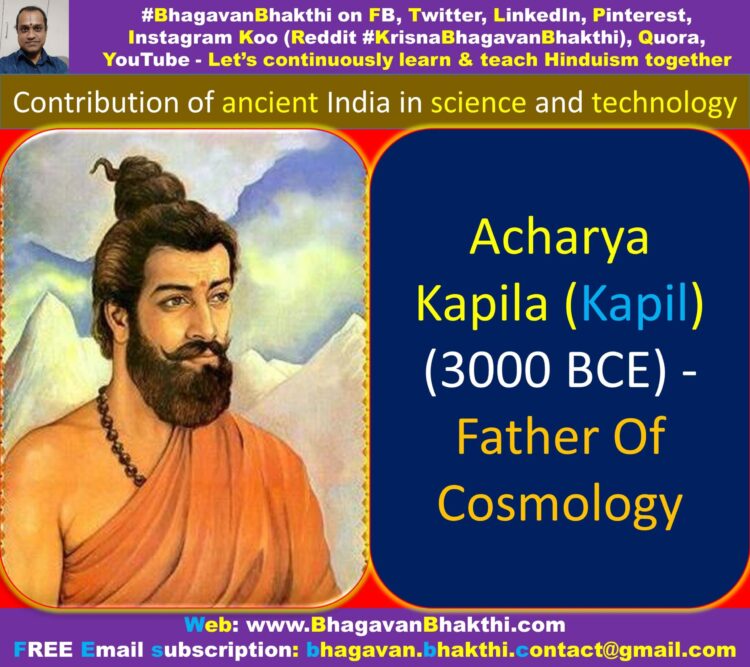 Acharya Kapila is celebrated as the founder and initiator of Sankhya philosophy.

Acharya Kapila is believed to have been born in 3000 BCE to the illustrious sage Kardama (father) and Devahuti Devi (mother).

Acharya Kapila gifted the world with the Sankhya School of Thought.

Acharya Kapila’s concept of transformation of energy and profound commentaries on atma (soul), non-atma (without soul) and the subtle elements of the cosmos.

This placed him in an elite class of master achievers, that is, incomparable to the discoveries of other cosmologists.

On Acharya Kapila’s assertion that Prakruti (Goddess Sri Maha Lakshmi Devi), with the inspiration of Purusha (Lord Vishnu), is the mother of cosmic creation and all energies.

Acharya Kapila contributed a new chapter in the science of cosmology.

Because of Acharya Kapila’s extrasensory observations and revelations on the secrets of creation, he is been recognized and saluted as the “Father of Cosmology”. 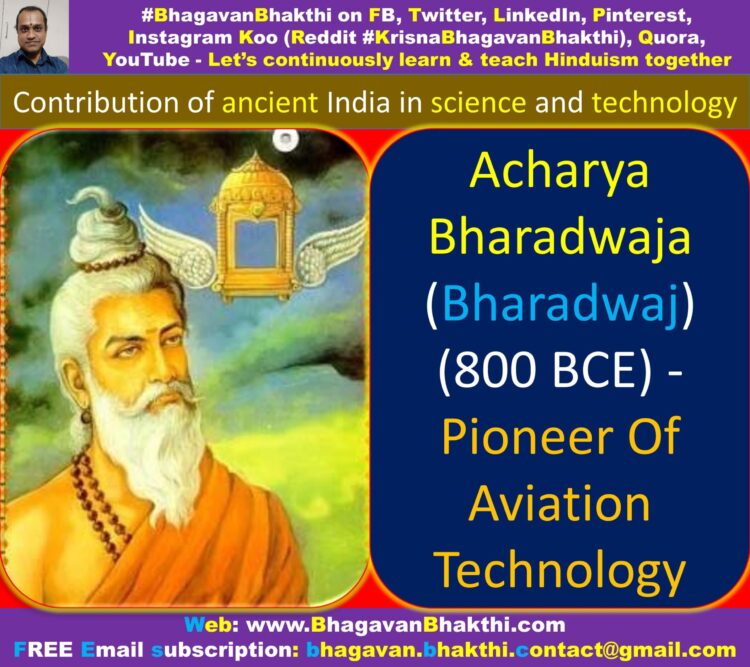 Acharya Bharadwaja had an ashrama (hermitage) in the holy city of Prayag and was an ardent apostle of Ayurveda and mechanical sciences.

Acharya Bharadwaja has described three categories of flying machines as given below:

a.) One that flies on earth from one place to another.

b.) One that travels from one planet to another.

c.) And One that travels from one universe to another.

Acharya Bharadwaja’s designs and descriptions have impressed and amazed aviation engineers of today generation too.

Acharya Bharadwaja’s brilliance in aviation technology is further reflected through techniques described by him as given below:

a. Profound Secret : The technique to make a flying machine invisible through the application of sunlight and wind force.

b. Living Secret : The technique to make an invisible space machine visible through the application of electrical force.

c. Secret of Eavesdropping : The technique to listen to a conversation in another plane.

d. Visual Secrets : The technique to see what’s happening inside another plane.

Through Acharya Bharadwaja’s innovative and brilliant discoveries, he has been recognized as the pioneer of aviation technology. 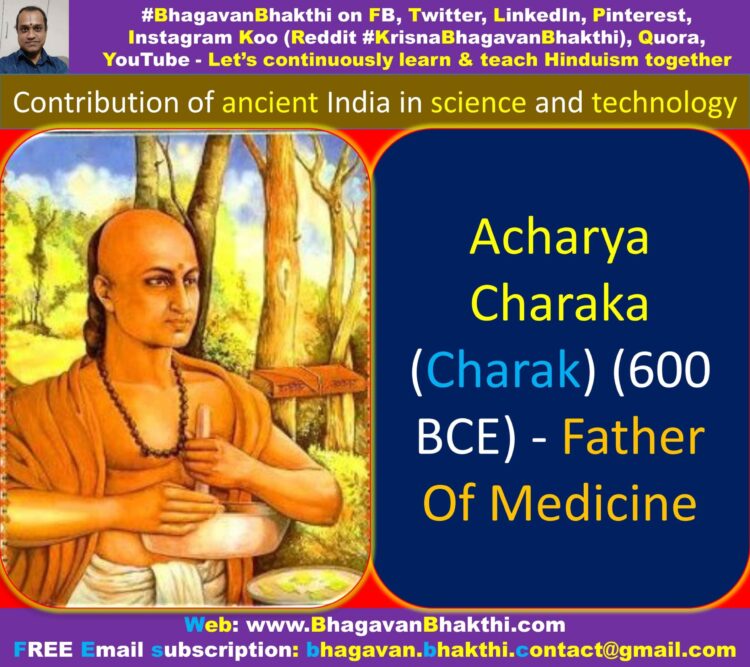 Acharya Charaka’s renowned work, that is, the ”Charaka Samhita“, is considered as an encyclopedia of Ayurveda.

Acharya Charaka’s principles, diagnoses, and cures retain their potency and truth even after a couple of millennia.

When the science of anatomy was confused with different theories in Europe.

Acharya Charaka had already revealed through his innate genius and enquiries the facts about the below:

Acharya Charaka in his ”Charaka Samhita” has described the medicinal qualities and functions of 100,000 herbal plants.

Acharya Charaka has emphasized the influence of diet and activity on mind and body.

Acharya Charaka has proved the correlation of spirituality and physical health contributed greatly to diagnostic and curative sciences.

Acharya Charaka has also prescribed and ethical charter for medical practitioners two centuries prior to the Hippocratic oath.

Acharya Charaka forever remains etched in the annals of history as one of the greatest and noblest of rishi-scientists.

Acharya Sushruta (Sushrut) (600 BCE) – Father Of Plastic Surgery – A genius who has been glowingly recognized in the annals of medical science. 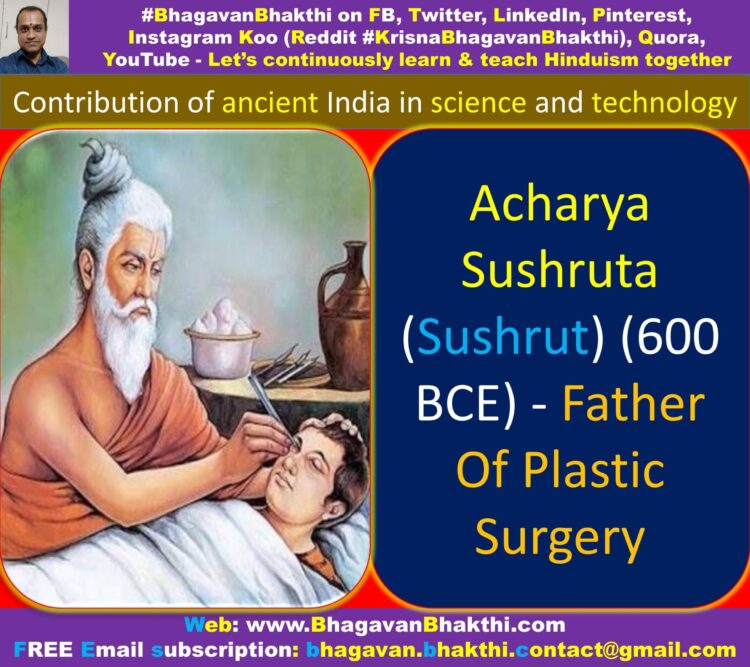 Acharya Sushruta details the first ever surgery procedures in ”Sushruta Samhita”, an unique encyclopedia of surgery.

Acharya Sushruta is venerated as the father of plastic surgery and the science of anesthesia.

When surgery was in its infancy in Europe, our great Acharya Sushruta was performing Rhinoplasty (restoration of a damaged nose) and other challenging operations.

In Acharya Sushruta’s ”Sushruta Samhita”, he prescribes treatment for twelve types of fractures and six types of dislocations.

Similarly in the same grantha (book), that is, in the ”Sushruta Samhita”, he details 300 types of operations.

The ancient Indians were the pioneers in amputation, caesarian and cranial surgeries.

Acharya Sushruta was a giant in the arena of medical science.

Acharya Kanada (Kanad) (600 BCE) – Founder Of Atomic Theory – He was the founder of “Vaisheshika Darshana”. 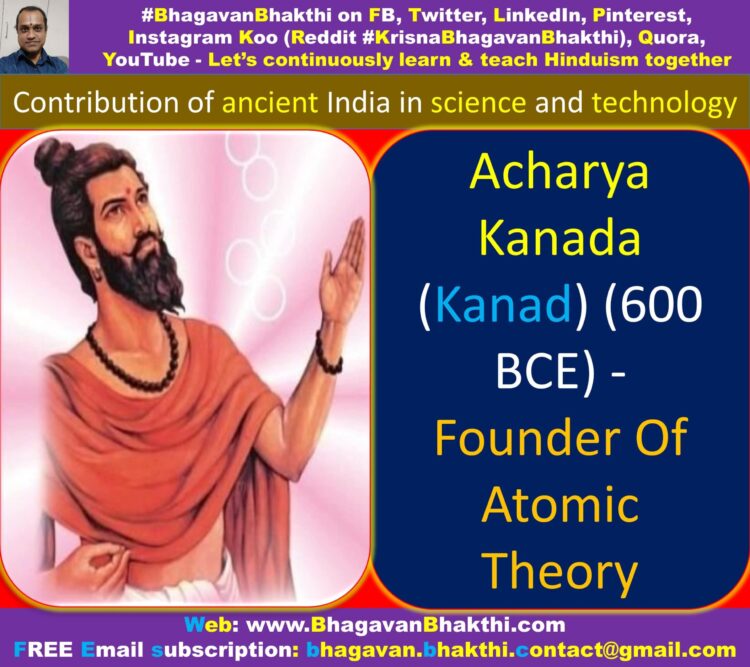 This “Vaisheshika Dharshan”, is one of six principal philosophies of India. Acharya Kanada was a genius in the field of philosophy.

Acharya Kanada, is believed to have been born in Prabhasa Kshetra near Dwarka in Gujarat.

Acharya Kanada was the pioneer expounder of realism, law of causation and the atomic theory.

Acharya Kanada has classified all the objects of creation into nine elements as given below:

Acharya Kanada says, “Every object of creation is made of atoms which in turn connect with each other to form molecules.”

Acharya Kanada’s statement ushered in the Atomic Theory for the first time ever in the world, nearly 2500 years before John Dalton.

Acharya Kanada has also described the dimension and motion of atoms and their chemical reactions with each other.

The eminent historian, T.N. Colebrook, has said, “Compared to the scientists of Europe, Acharya Kanada and other Indian scientists were the global masters of this field.” 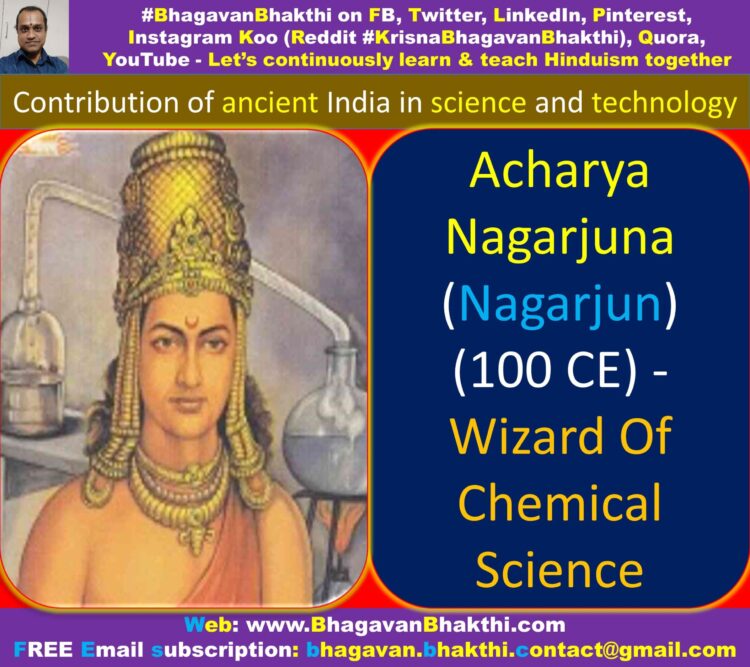 Acharya Nagarjuna was born in the nondescript village of Baluka in Madhya Pradesh.

Nargarjuna’s dedicated research for twelve years produced maiden discoveries and inventions in the faculties of chemistry and metallurgy.

Textual masterpieces like ”Rasa Ratnakara”, “Rasahrudaya” and “Rasendramangala” are his renowned contributions to the science of chemistry.

Where the medieval alchemists of England failed, Nagarjuna had discovered the alchemy of transmuting base metals into gold.

As the author of medical books like “Arogyamanjari” and “Yogasara,” Acharya Nagarjuna also made significant contributions to the field of curative medicine.

Because of Acharya Nagarjuna’s profound scholarliness and versatile knowledge, he was appointed as Chancellor of the famous University of Nalanda.

Acharya Patanjali (200 BCE) – Father Of Yoga – The Science of Yoga is one of several unique contributions of India to the world. 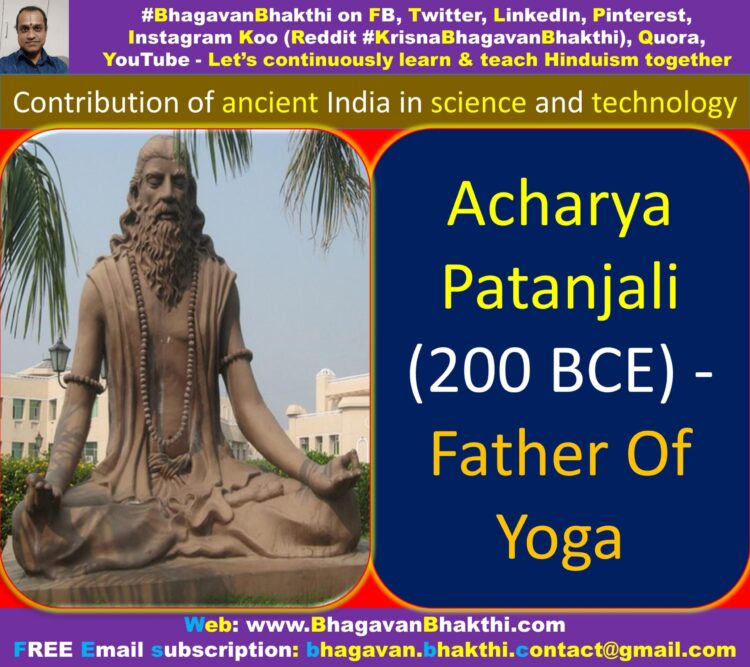 It seeks to discover and realize the ultimate reality through yogic practices.

Acharya Patanjali, the founder, hailed from the district of Gonda (Ganara) in today’s Uttar Pradesh.

Acharya Patanjali prescribed the control of prana (life breath) as the means to control the body, mind and soul.

This subsequently rewards one with good health and inner happiness.

Acharya Patanjali’s 84 yogic postures effectively enhance the efficiency of the respiratory, circulatory, nervous, digestive and endocrine systems and many other organs of the body.

Yoga has eight limbs where Acharya Patanjali shows the attainment of the ultimate bliss of God in samadhi through the disciplines of the following:

The Science of Yoga has gained popularity because of its scientific approach and benefits.

Yoga also holds the honored place as one of six philosophies in the Indian philosophical system.

Acharya Patanjali will forever be remembered and revered as a pioneer in the science of self-discipline, happiness and self-realization. 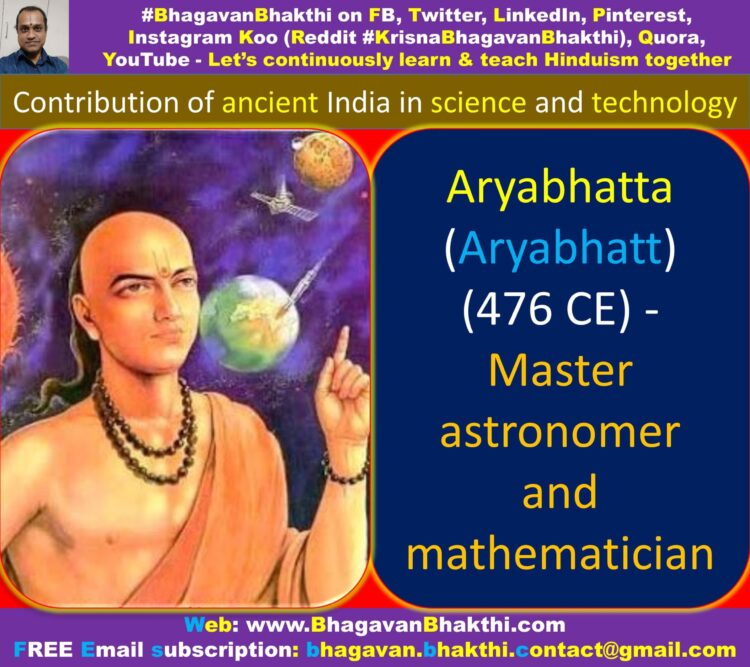 Aryabhatta’s intellectual brilliance remapped the boundaries of mathematics and astronomy.

In 499 CE, at the age of 23, he wrote a text on astronomy and an unparalleled treatise on mathematics called “Aryabhatiyam”.

Acharya Aryabhatta formulated the process of calculating the motion of planets and the time of eclipses.

Acharya Aryabhatta was the first to proclaim that the earth is round, it rotates on its axis, orbits the sun and is suspended in space – 1000 years before Copernicus published his heliocentric theory.

Acharya Aryabhatta is also acknowledged for calculating pi (Pi) to four decimal places, that is, 3.1416

Also, he is the one who showed the sine table in trigonometry.

Centuries later, in 825 CE, the Arab mathematician, Mohammed Ibna Musa credited the value of Pi to the Indians.

And above all, Acharya Aryabhatta’s most spectacular contribution was the concept of zero without which modern computer technology would have been non-existent.

Aryabhatta was a colossus in the field of Mathematics.

Varahamihira (Varahamihir) (499-587 CE) – Eminent Astrologer And Astronomer – He was a renowned astrologer and astronomer. 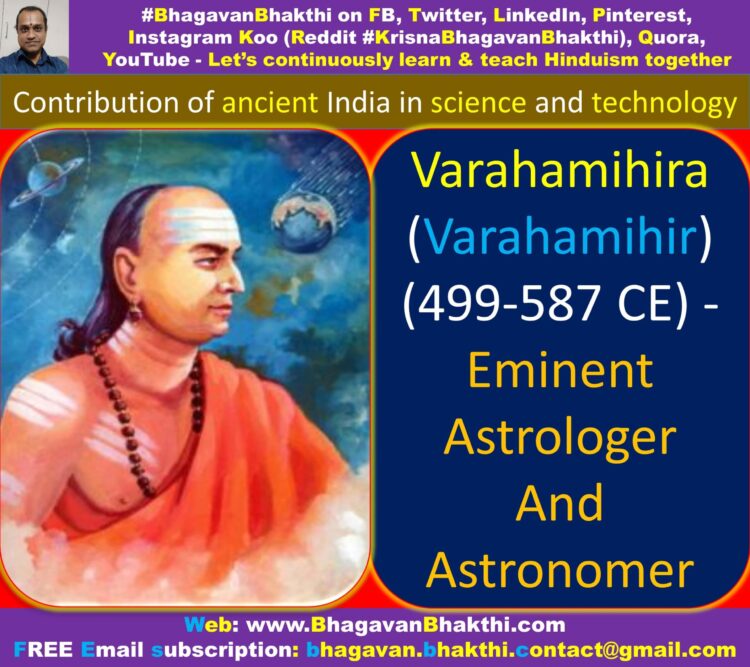 Varahamihira was honored with a special decoration and status as one of the nine gems in the court of King Vikramaditya in Avanti (Ujjain).

Varahamihira’s book “panchasiddhanta” holds a prominent place in the realm of astronomy.

Varahamihira notes that the moon and planets are lustrous not because of their own light, but due to Sunlight.

In the ”Bruhad Samhita” and ” Bruhad Jataka”, he has revealed his discoveries in the domains of geography, constellation, science, botany and animal science.

The rishi-scientist survives through his unique contributions to the science of astrology and astronomy. 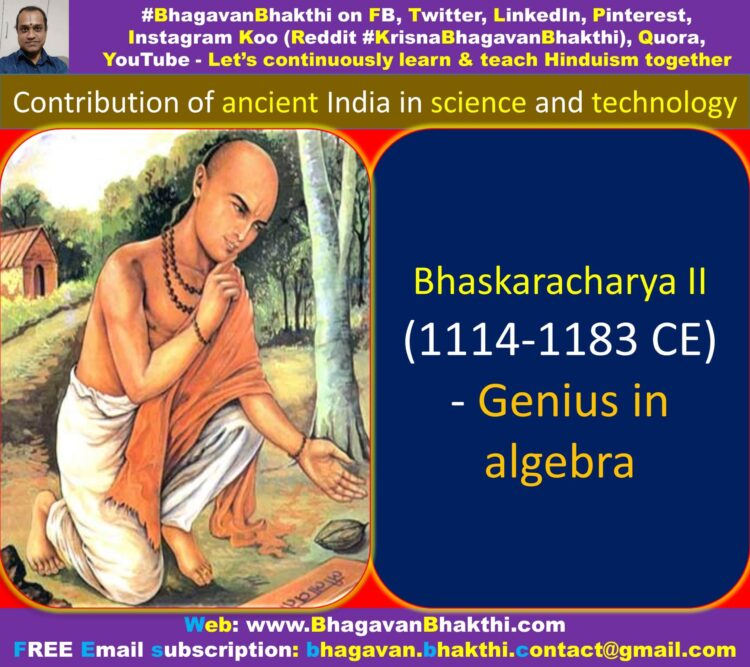 Bhaskaracharya’s work in Algebra, Arithmetic and Geometry catapulted him to fame and immortality.

Bhaskaracharya’s renowned Mathematical works called “Lilavati” and “Bijaganita” are considered to be unparalled and a memorial to his profound intelligence.

Its translation in several languages of the world bear testimony to its eminence.

In the “Surya Siddhanta” he makes a note on the force of gravity as given below:

“Objects fall on earth due to a force of attraction by the earth. Therefore, the earth, planets, constellations, moon, and sun are held in orbit due to this attraction.”

Bhaskaracharya was the first to discover gravity, 500 years before Sir Isaac Newton.

Bhaskaracharya was the champion among Mathematicians of ancient and medieval India.

Bhaskaracharya’s works fired the imagination of Persian and European scholars, who through research on his works earned fame and popularity.

To know about “Famous quotes about India (Hinduism) by foreigners“, please click the below link:

To know about “What are Sanskrit language unknown facts (origin, importance)“, please click the below link:

To know “Information about Sanskrit language“, kindly click the below link: