Sanskrit word is originally pronounced as Samskruta (संस्कृत / ಸಂಸ್ಕೃತ / samskr̥ta). But due to language and pronunciation difference, people have started to pronounce it as Sanskrit.

Sanskrit is the oldest language on earth. Sanskrit is as old as this universe and earth itself.

All the great and divine Hindu (Sanatana Dharma) scriptures like Vedas, Mahabharata, Ramayana, Puranas, etc. all are written in this language itself. 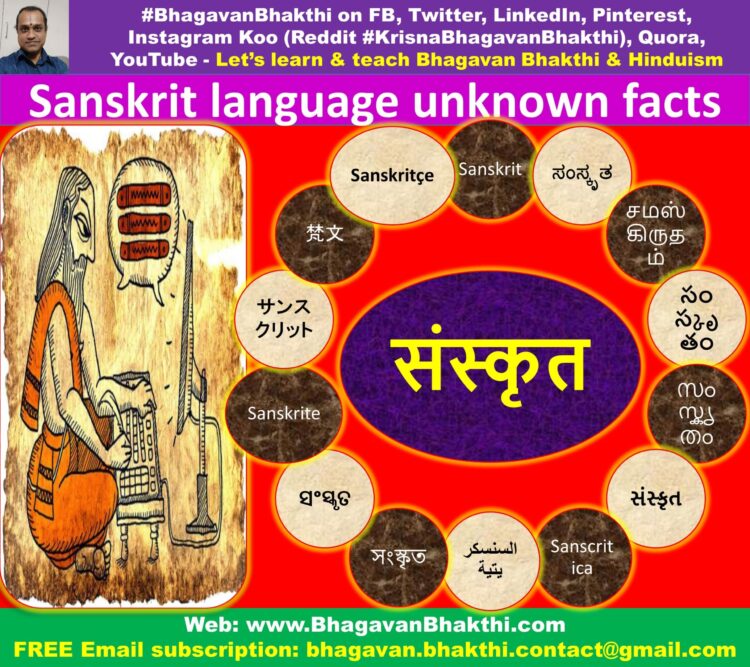 List of Sanskrit language unknown facts are as given below:

Sanskrit is the oldest language on earth

Sanskrit is existing since the aadi kalam

Sanskrit will exist until the ananta kalam

Hindu scriptures are written in Sanskrit itself

Even God and Demigods speak Sanskrit

Sanskrit is called as Devanagari language

Sanskrit is spoken in other planets too

Word Sanskrit is the combination of two words

Sanskrit shlokas can be sung with highest ease

Sanskrit is the most perfect language on earth

Sanskrit is the mother of the languages of the world including Latin, Arabic, etc.

All the Indian languages are originated from Sanskrit itself

Many real European and other scholars began to study Sanskrit

Even Bhagavan Sri Vishnu, Goddess Lakshmi and all the Devatas (Demigods) who stay in different planets like Vaikuntha, Satya Loka, Svarga Loka etc. all speak this divine language itself.

For this reason, Sanskrit is known as ‘Devanagari’ language. Here Devanagari = Deva + Nagari = Gods + Place, that is, even in the Bhagavan and Devatas planets same language is spoken.

Sanskrit, is the ultimate and most ancient language on this earth and the unlimited Universes (Multiverses).

Sanskrit (Samskruta) is the combination of two words, that is, Sams + kruta = Together + Written.

Sanskrit (Samskruta) words are so wonderfully designed that, all the words in Sanskrit is a combination of one or more words in itself.

Also the Lord Shiva name called as Mrityunjaya = Mrityu + an + jaya = Death + He + won, that is, Lord Shiva has won over Mrityu (Lord Yama) during the Markandeya episode, Lord Shiva wins over Lod Yama and thus Lord Shiva is known as Lord Mrityunjaya. 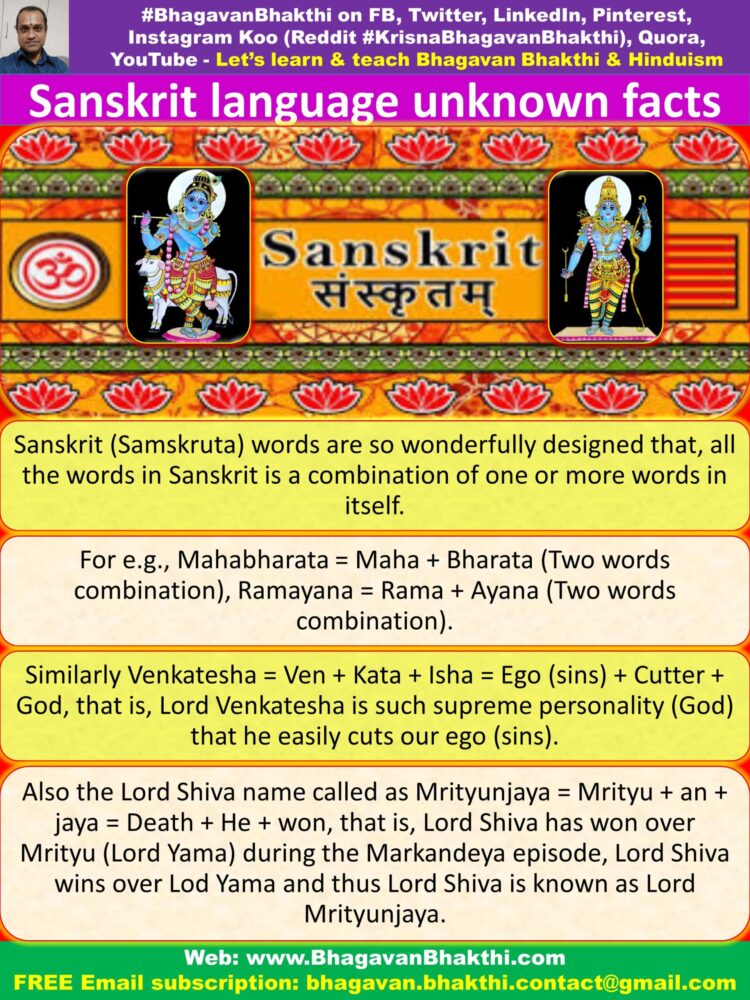 When we read the shlokas (quotes / stotrams) of any Hindu scriptures, the whole shloka (stotrams) can be sang like a song.

Sanskrit, as said above is the most perfect language among all the languages in the Multiverses.

There is definitely no match for this language on the Multiverses.

As said above, even the Devatas (Demigods) in the other planets communicate with this divine language Sanskrit. E.g., Svarga Loka, Brahma Loka, Vainkuntha Loka, etc.

Sanskrit is the greatest and unmeasurable treasure given to the world by ancient India.

Off course, the great and divine language Sanskrit is universally recognized as the language containing the earliest literature of the world.

Sanskrit is the mother of the languages of the world including Latin, Arabic, etc.

Sanskrit has been established as the ancient branches of all the languages around the world and this has been accepted from all over the globe by many Historians.

Even the modern languages of India are directly and indirectly derived from this divine language Sanskrit. 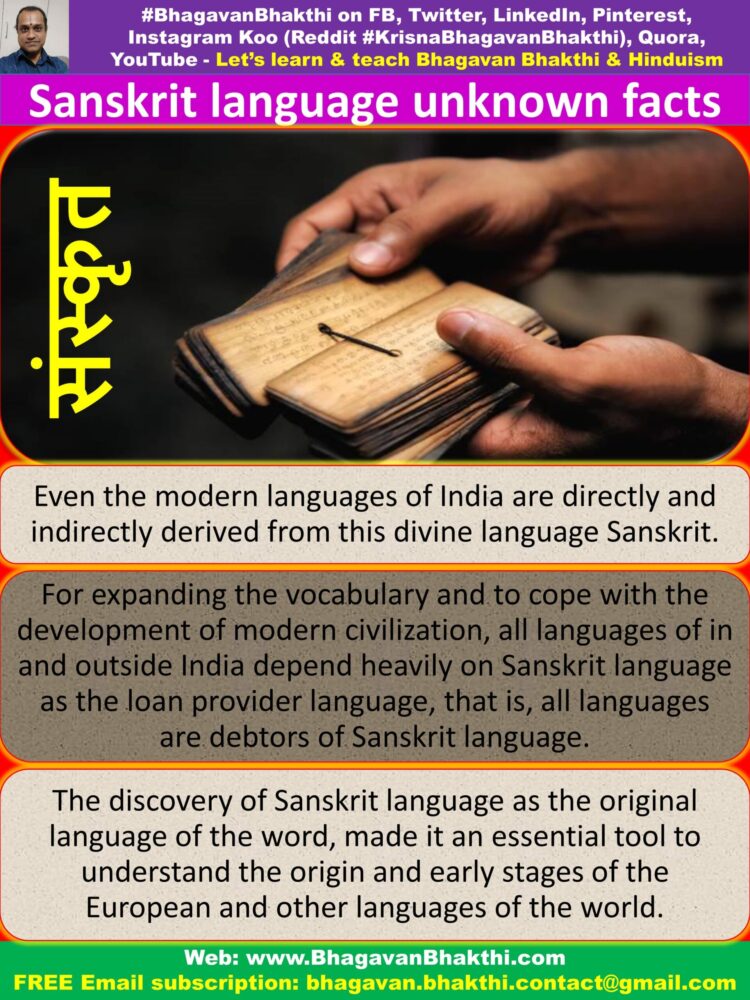 The discovery of Sanskrit language as the original language of the word, made it an essential tool to understand the origin and early stages of the European and other languages of the world.

Many real European and other scholars began to study Sanskrit as their own language and this is still continuing even today and will continue forever.

It is being said that there is huge awareness and a growing interest in the West for Sanskrit studies, especially in Europe, USA, etc.

This is happening because the Sanskrit language is recognized as the earliest language of the world and is indeed the mother of all the languages of the globe.

Sanskrit literature is the unlimited sky (not just an ocean) and this contains unlimited words and sentences of divinity and wisdom.

Sanskrit is the main source for Vedas, Mahabharata, Ramayana, Upanishads, Shastras, Kavyams etc. and is called as the Deva Bhasha (language spoken by God and Demigods) as this same language is spoken by the Devatas (Demigods) and Bhagavan (God) too.

The sound of each of the 36 consonants and the 16 vowels of Sanskrit are fixed and precise since the very beginning.

There has been no change or alteration or edit of this great and divine Sanskrit language since ‘aadi kalam’ (grand unknown age). 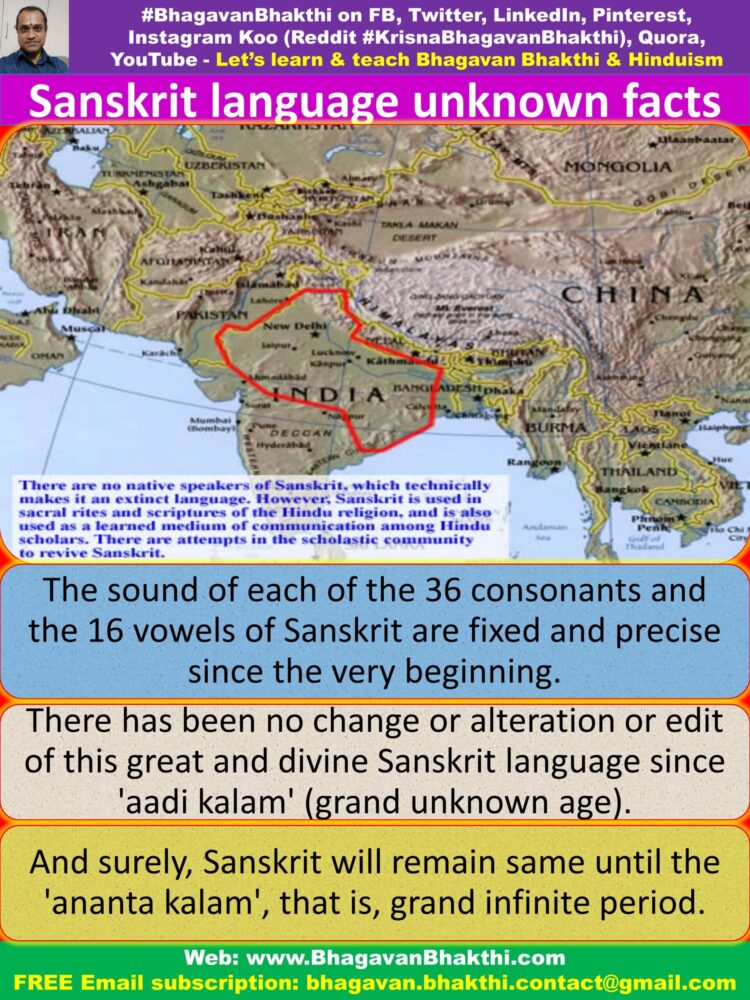 And surely, Sanskrit will remain same until the ‘ananta kalam’, that is, grand infinite period.

In Sanskrit, there has been no ‘sound shift,’ no change in the vowel system, and no addition or deletion was ever made in the grammar of the Sanskrit in relation to the formation of the alphabets and / or words.

The reason for this is its absolute perfection and flawlessness by its own nature and formation of this great, unique and divine language of Sanskrit.

In Sanskrit, the morphology, microstructure etc. of word formation in Sanskrit language is highly unique and of its own kind where a word is formed from a tiny seed root (called dhatu) in a precise grammatical order which has been the same since the ‘aadi kalam’ (grand first time).

Sanskrit is such an unique language that, any number of desired words can be created through its root words and the prefix and suffix system as detailed in the Ashtadhyayi of Panini. 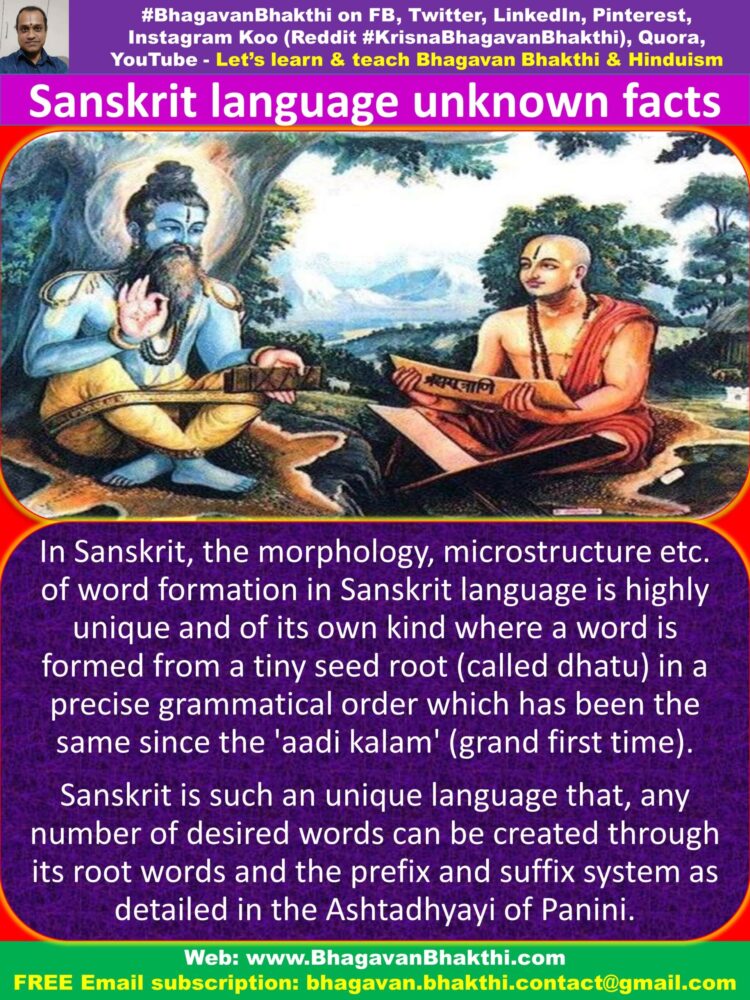 Sanskrit written in different languages in and outside India is as given below: 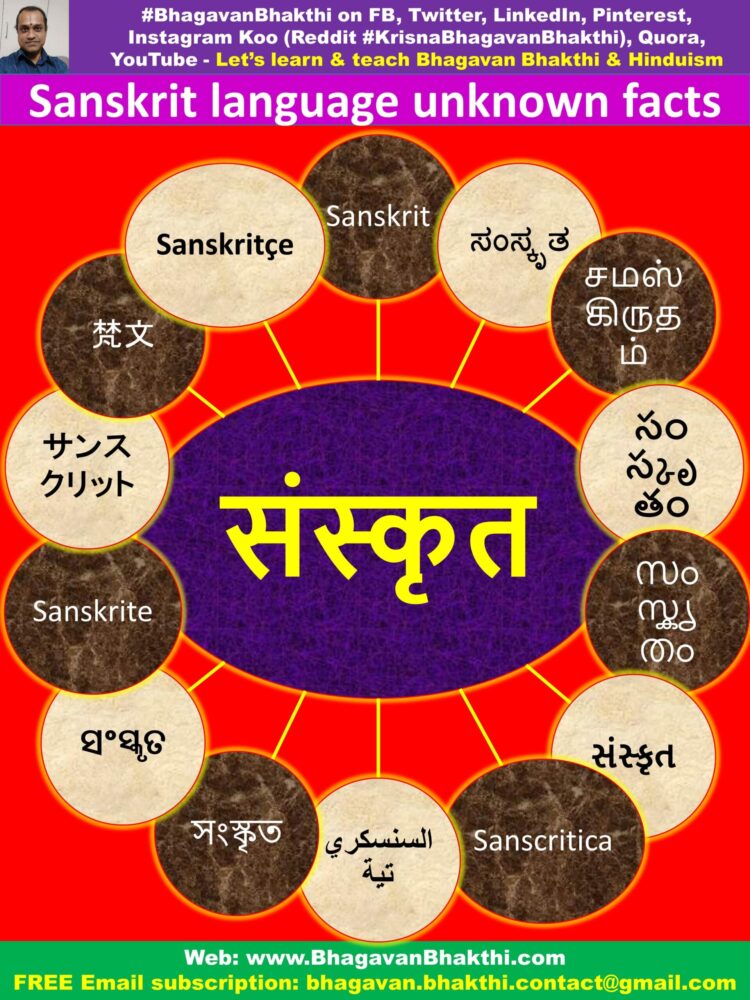 To know more about Sanskrit language, visit the below link:

The greatness of Sanskrit language