List of famous quotes about India (Hinduism) by foreigners

Dear friends, many of us may be knowing that India is called as ‘Karma Bhoomi’. Means, only Karmas which is done in India is counted.

India has given birth to various great rishis / sages, sants / saints and philosophers.

Vedas, Puranas, Upanishads, Mahabharata, Ramayana are written and scripted in this great India itself.

Vedas are most sacred shastras / scripts of Hindu Sanatana Dharma.

Hinduism in the vaidika / vedic tradition is known as ‘Sanatana Dharma’ is the Hindu science of perfect and simple living. 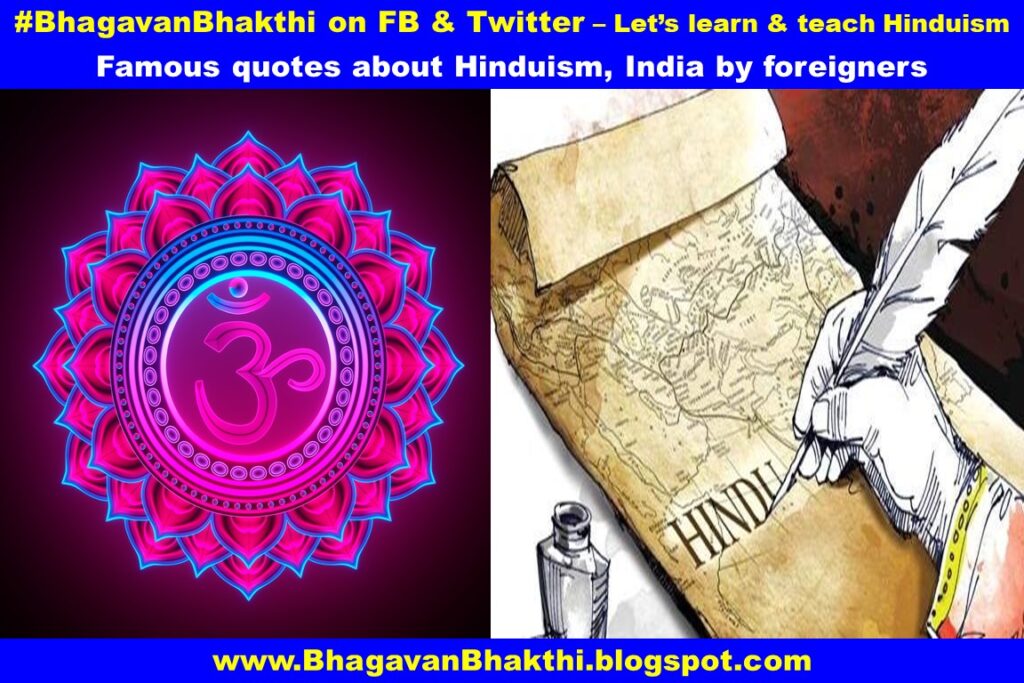 We must be knowing since Yore time, several religions and civilizations have come and gone, but Hindu Sanatana Dharma is still flourishing since unknown age and time.

‘Bhagavad Gita’ the essence of Hindu Sanatana Dharma philosophy and culture is not only a text book for Hindus, but a daivi / divine granta for all the humanity.

Bhagavan Sri Veda Vyasa Ji (he is an avatar of Bhagavan Sri Vishnu) was one of the first daring revolutionaries in Hindu Sanatana Dharma and Bhagavad Gita is daivi / divine granta that created revolutions in the whole world.

It is only Indians who can give the chronology which provides the precise dates for prehistoric events with the support of jyotishya shastra / astronomical data.

Also, we should always remember that, there is robust literature in the form of Puranas and Ithihasas that gives not only the political events, but descriptions of the civilization and social life of the world and not only the present India.

This boundless knowledge constitutes the real history of the people of India in the fullest sense of the term history.

Today let us know about very famous foreigners and also Indians who have quoted about Hinduism and India:

List of famous quotes about India (Hinduism) by foreigners are as given below:

Will Durant, American Historian: “It is true that even across the Himalayan barrier India has sent to the west, such gifts as grammar and logic, philosophy and fables, hypnotism and chess, and above all numerals and the decimal system.”

Mark Twain, American author: “India is the cradle of the human race, the birthplace of human speech, the mother of history, the grandmother of legend, and the great grand   mother of tradition. Our most valuable and most instructive materials in the history of man are treasured up in India only.”

Max Mueller, German scholar: If I were asked under what sky the human mind has most fully developed some of its choicest gifts, has most deeply pondered on the greatest problems of life, and has found solutions, I should point to India.

Will Durant, American Historian: “India will teach us the tolerance and gentleness of mature mind, understanding spirit and a unifying, pacifying love for all human beings.”

Romain Rolland, French scholar: “If there is one place on the face of earth where all the dreams of living men have found a home from the very earliest days when man began the dream of existence, it is India.”

Albert Einstein, American scientist: “We owe a lot to the Indians, who taught us how to count, without which no worthwhile scientific discovery could have been made.”

A Rough Guide to India: “It is impossible not to be astonished by India. Nowhere on Earth does humanity present itself in such a dizzying, creative burst of cultures and religions, races and tongues.

Enriched by successive waves of migration and marauders from distant lands, every one of them left an indelible imprint which was absorbed into the Indian way of life.

Every aspect of the country presents itself on a massive, exaggerated scale, worthy in comparison only to the superlative mountains that overshadow it.

It is this variety which provides a breathtaking ensemble for experiences that is uniquely Indian. Perhaps the only thing more difficult than to be indifferent to India would be to describe or understand India completely.

There are perhaps very few nations in the world with the enormous variety that India has to offer. Modern day India represents the largest democracy in the world with a seamless picture of unity in diversity unparalleled anywhere else.”

R.W. Emerson, American Author: In the great books of India, an empire spoke to us, nothing small or unworthy, but large, serene, consistent, the voice of an old intelligence, which in another age and climate had pondered and thus disposed of the questions that exercise us.

William James, American Author: “From the Vedas we learn a practical art of surgery, medicine, music, house building under which mechanized art is included. They are encyclopedia of every aspect of life, culture, religion, science, ethics, law, cosmology and meteorology.”

Hu Shih, former Ambassador of China to USA: “India conquered and dominated China culturally for 20 centuries without ever having to send a single soldier across her border.”

Keith Bellows, National Geographic Society: “There are some parts of the world that, once visited, get into your heart and won’t go. For me, India is such a place. When I first visited, I was stunned by the richness of the land, by its lush beauty and exotic architecture, by its ability to overload the senses with the pure, concentrated intensity of its colors, smells, tastes, and sounds… I had been seeing the world in black & white and, when brought face-to-face with India, experienced everything re-rendered in brilliant technicolor.”

Mark Twain: “So far as I am able to judge, nothing has been left undone, either by man or nature, to make India the most extraordinary country that the sun visits on his rounds. Nothing seems to have been forgotten, nothing overlooked.”

Max Muller, German Scholar: “There is no book in the world that is as thrilling, stirring and inspiring as the Upanishads.” (‘Sacred Books of the East’)

Dr Arnold Toynbee, British Historian: “It is already becoming clear that a chapter which had a Western beginning will have to have an Indian ending if it is not to end in the self-destruction of the human race. At this supremely dangerous moment in history, the only way of salvation for mankind is the Indian way.”

Sir William Jones, British Orientalist: “The Sanskrit language, whatever be its antiquity is of wonderful structure, more perfect than the Greek, more copious than the Latin and more exquisitely refined than either.”

Johnstone: “Gravitation was known to the Hindus (Indians) before the birth of Newton. The system of blood circulation was discovered by them centuries before Harvey was heard of.”

Emmelin Plunret: “They were very advanced Hindu astronomers in 6000 BC. Vedas contain an account of the dimension of Earth, Sun, Moon, Planets and Galaxies.” (‘Calendars and Constellations’)

Sylvia Levi: “She (India) has left indelible imprints on one fourth of the human race in the course of a long succession of centuries. She has the right to reclaim … her place amongst the great nations summarizing and symbolizing the spirit of humanity. From Persia to the Chinese sea, from the icy regions of Siberia to Islands of Java and Borneo, India has propagated her beliefs, her tales, and her civilization!”

Schopenhauer: “Vedas are the most rewarding and the most elevating book which can be possible in the world.” (Works VI p.427)

Mark Twain: “India has two million gods, and worships them all. In religion all other countries are paupers; India is the only millionaire.”

Colonel James Todd: “Where can we look for sages like those whose systems of philosophy were prototypes of those of Greece: to whose works Plato, Thales and Pythagoras were disciples? Where do I find astronomers whose knowledge of planetary systems yet excites wonder in Europe as well as the architects and sculptors whose works claim our admiration, and the musicians who could make the mind oscillate from joy to sorrow, from tears to smile with the change of modes and varied intonation?”

Lancelot Hogben: “There has been no more revolutionary contribution than the one which the Hindus (Indians) made when they invented ZERO.” (‘Mathematics for the Millions’)

Wheeler Wilcox: “India – The land of Vedas, the remarkable works contain not only religious ideas for a perfect life, but also facts which science has proved true. Electricity, radium, electronics, airship, all were known to the seers who founded the Vedas.”

Heisenberg, German Physicist: “After the conversations about Indian philosophy, some of the ideas of Quantum Physics that had seemed so crazy suddenly made much more sense.”

Sir W. Hunter, British Surgeon: “The surgery of the ancient Indian physicians was bold and skilful. A special branch of surgery was dedicated to rhinoplasty or operations for improving deformed ears, noses and forming new ones, which European surgeons have now borrowed.”

Sir John Woodroffe: “An examination of Indian Vedic doctrines shows that it is in tune with the most advanced scientific and philosophical thought of the West.”

Henry David Thoreau, American Thinker & Author: Whenever I have read any part of the Vedas, I have felt that some unearthly and unknown light illuminated me. In the great teaching of the Vedas, there is no touch of sectarianism. It is of all ages, climbs, and nationalities and is the royal road for the attainment of the Great Knowledge. When I read it, I feel that I am under the spangled heavens of a summer night.

If you are aware of any such famous and great quotes of any foreigners or Indians, you can share with me.

I have made a study and found that the there is a huge relationship between “Yugadi / Hindu new year, April Fools day and Roman new year relationship”.