Just before knowing about “What is Vajranga story (Vajranga father of Tarakasura)“, let us know few basic information. 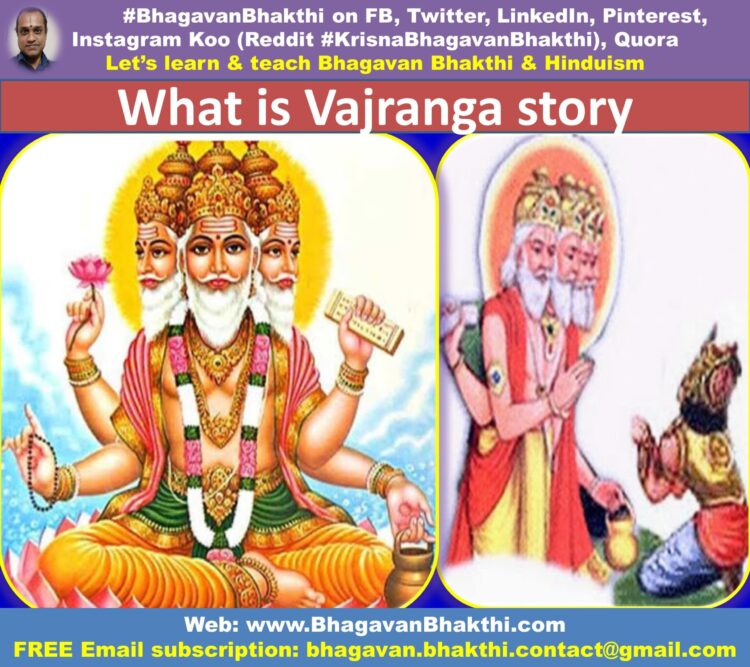 Indra Deva had killed many of Diti’s children, the daityas (demons). Diti had wished to obtain a son who would kill Lord Indra Deva.

But because she had not been able to adhere to the stipulated religious rites, the sons who had been born had become friends and companions of Indra.

But Indra Deva continued to attack and kill the demons.

Diti therefore prayed to her husband Kashyapa Maharishi yet again that, she want a son who will defeat Indra.

“Your wish will be granted,” said Kashyapa Maharishi. “But you will have to meditate hard for ten thousand years”.

Indra Deva’s weapon is the vajra and the son who will be born will have a body (anga) that is as tough as the vajra will be able to do him no harm.

Diti meditated for ten thousand years and in due course, gave birth to this powerful son. Vajranga (who has the anga/body of vajra) was invincible.

When Vajranga grew up, Diti told her son, “Indra has killed many of my sons. I am thirsting for revenge. Go and kill Indra.”

Vajranga set for heaven. He defeated Indra Deva very easily and tied him up. 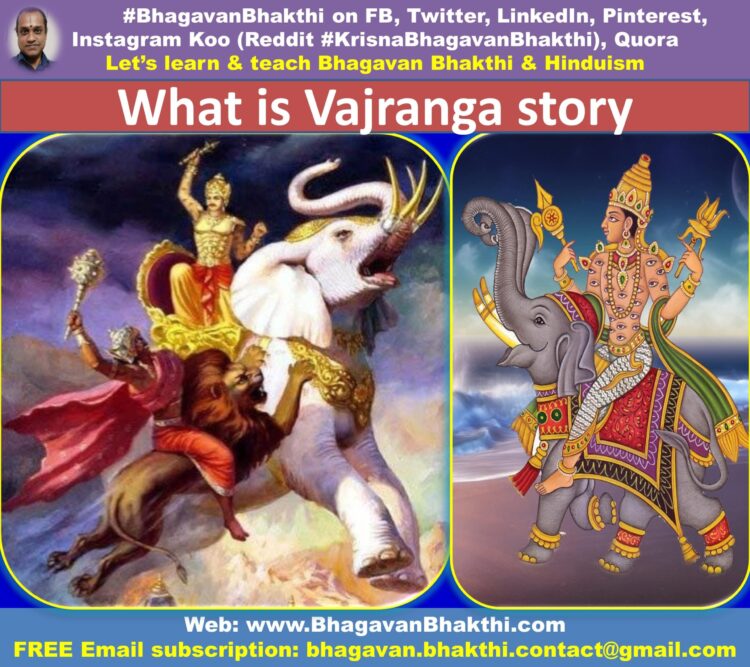 He then brought Indra Deva home to his mother and prepared to kill the king of the gods.

Indra Deva’s death would have been a great calamity and Brahma Deva and Kashyapa Maharishi rushed there.

“Vajranga,” they said. “Please do not kill Indra. Let him go. If someone who deserves respect is insulted, that is like death for him.

Indra Deva has been defeated by you. He has therefore been insulted and is as good as dead.

There is no need to physically kill him.

Moreover, the very fact that you are letting Indra Deva go at our request will be known to all.

Even if he lives, everyone is going to regard him as dead. Listen to our request and let him go.”

“I am not averse to that suggestion at all,” replied Vajranga.

“I have no intention of killing Indra. I was merely obeying my mother’s instructions.

How can I refuse two such revered individuals like you?

One of you is the creator of the whole universe and the other one is my own father. I will let Indra go.

But please grant me a boon. Grant me the boon that I may be able to perform a lot of tapasya.”

This boon was readily granted.

In addition, Brahma Deva created a beautiful woman named Varangi and married her off to Vajranga.

Vajranga went to the forest to meditate.

For a thousand years, he stood with his arms raised up towards the sky. And in this posture, he meditated. 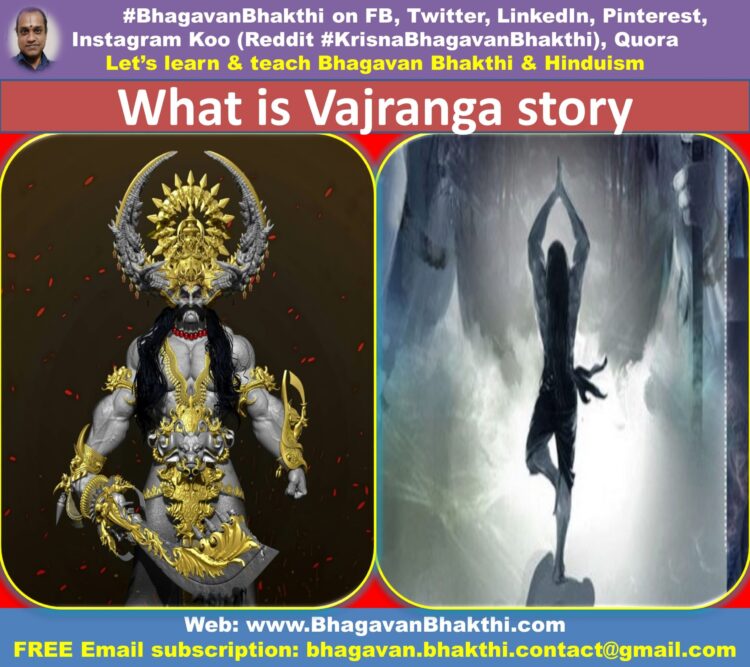 He then stood on his head for a thousand years more and meditated.

As a final part of the tapasya, he wished to meditate under the water for a thousand years more.

When Vajranga entered the water, his wife Varangi patiently waited for her husband to return.

And all the while, she too meditated.

But Indra Deva was not going to let sleeping dogs lie.

He adopted the form of a monkey and uprooted all the trees in Varangi’s hermitage.

He next adopted the form of a sheep and ate up all the grass that was there.

As a snake, he tried to bite the lady.

Finally, he adopted the form of a cloud and drenched the hermitage in torrents of rain. 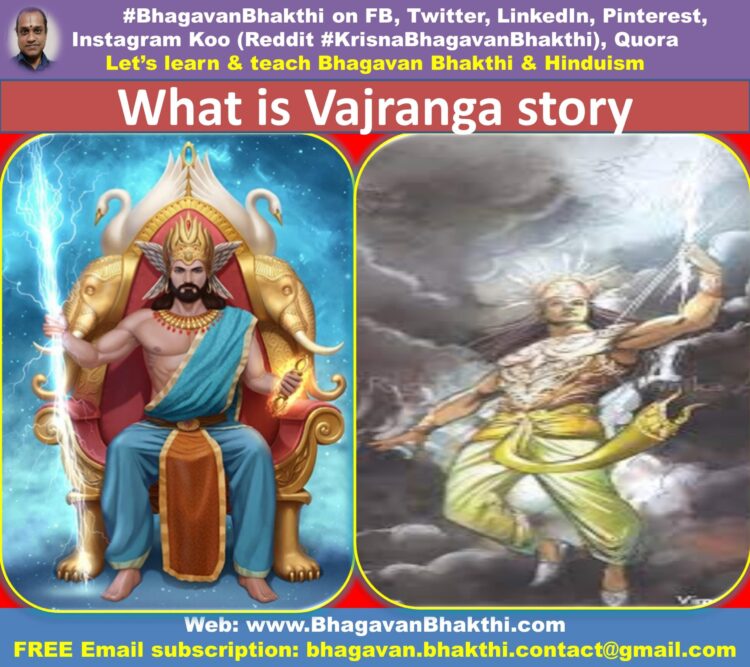 Since Varangi was meditating, she was in no position to retaliate or protect herself. She had to bear all these depredations.

When the thousand years were over, Vajranga returned.

He was shocked to learn of the tortures that his wife had been subjected to by Indra.

He began to meditate again. This time, he wished for a son who would kill Indra Deva.

“You will have a son who will be the scourge of the gods,” said Brahma Deva. “He will be called Taraka”.

For a thousand years Varangi bore the baby in her womb. When Taraka was born, the earth trembled and tidal waves were created in the ocean.

In due course, Taraka was crowned the king of the demons.

To know more about the “Vajranga’s son Taraka (Tarakasura)” you can continue reading from the below link: