What is false Parvati story

Bhagavan Lord Sri Krishna, Lord Shiva and Sri Parvati Devi blessings to you and your family!

Just before moving towards to know about “What is false Parvati story“, let us know few basic information. 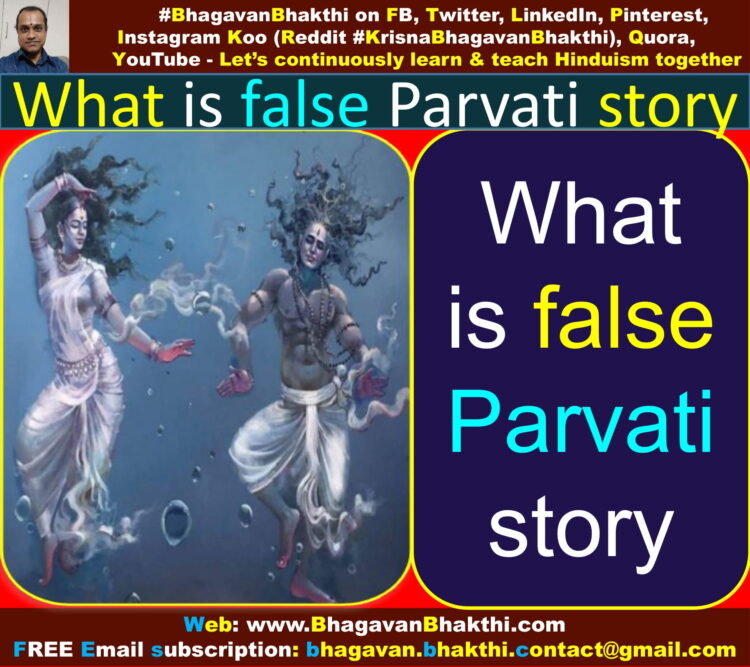 Lord Shiva had once gone on a visit to a city named Shonitapura.

Lord was accompanied by many daivi / divine Gandharvas and Apsara Devis.

Sri Parvati Devi was left behind in Kailasha and Lord Shiva felt lonely without her. Lord Shiva called Nandi and said:

“Go to Kailasha and ask Parvati to come here”.

Sri Parvati Devi said that this would take a little time, since she wanted to get ready first.

Nandi went back and reported to Lord Shiva what Sri Parvati Devi had said.

Lord Shiva waited for a little while, but Sri Parvati Devi did not come.

Lord Shiva therefore sent Nandi again to Kailasha with the injunction that he should not come back without Sri Parvati Devi.

The Apasara Devis meanwhile decided that they would play a trick on Lord Shiva. 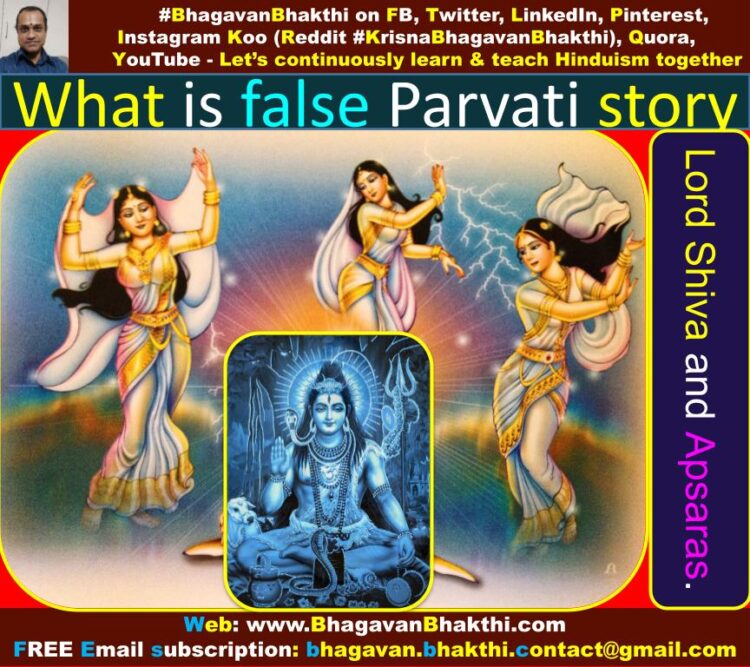 One of them would disguised herself and pretend to be Sri Parvati Devi.

An Apsara Devi named Sri Chitralekha Devi agreed to do this.

And all the other Apsara Devis disguised themselves as companions of Sri Parvati Devi.

So good were their disguises, that it was impossible to detect them as being false.

The false Nandi then brought the false Sri Parvati Devi to Lord Shiva and said:

“Parvati has come. Her companions, the other Devis / goddesses, have also come”.

While they were having great fun, the real Sri Parvati Devi, the real Nandi and the real Devis / Goddesses turned up and there was utter confusion. 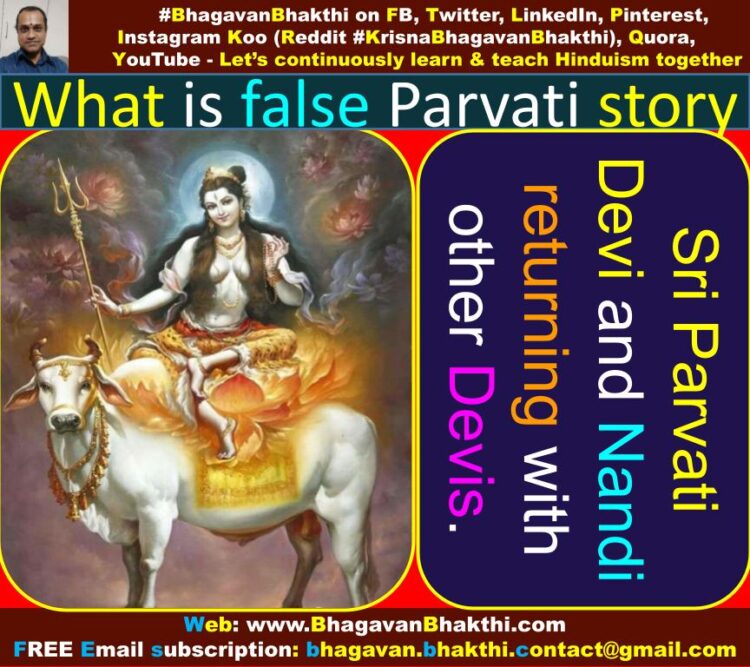 No one could tell the real ones from the false ones. Finally the mess was sorted out when all the Apsara Devis adopted their real forms.

Neither Lord Shiva nor Sri Parvati Devi were angry at this practical joke.

This  is an incident from the time when Sri Parvati Devi went away to do tapasya / penance, so as to become fair.

Before going away to meditate, Sri Parvati Devi called Nandi to her and said:

“My husband does not know the difference between real Parvati and false ones. Keep careful guard at the gate and do not let any false Parvatis enter”.

There was an asura named Adi.

He performed tapasya / penance and wanted a boon from Sri Chatur Mukha Brahma Deva which would make him immortal. 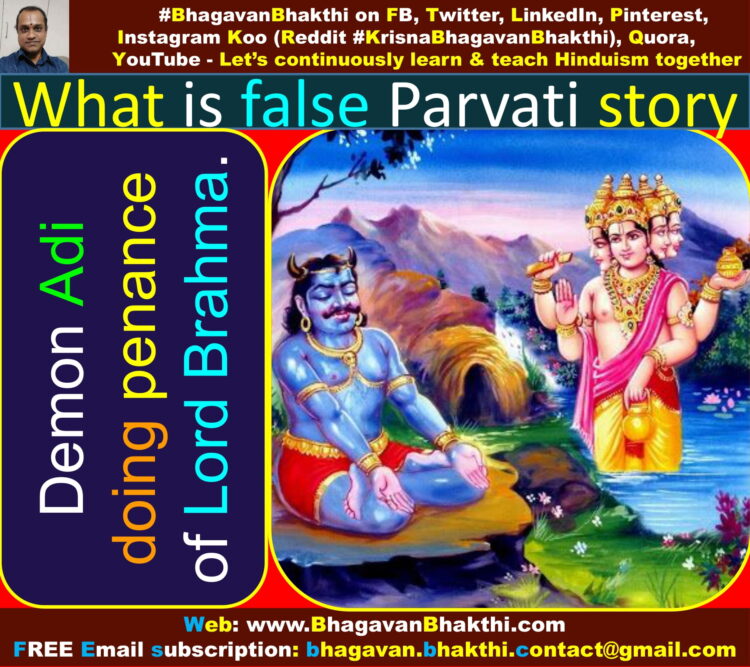 Sri Chatur Mukha Brahma Deva refused to grant him this, but granted him the boon that Adi would be very strong.

Happy with this boon, Adi wandered around the Himalayas and discovered Nandi standing guard at the gate to Lord Shiva’s palace.

“What are you doing here?” the asura Adi asked Nandi. Nandi reported the conversation that had taken place with Sri Parvati Devi.

Nandi not let him pass and thus asura Adi slimed through the gate disguised as a snake.

And once inside the palace, asura Adi resumed his form of Sri Parvati Devi. 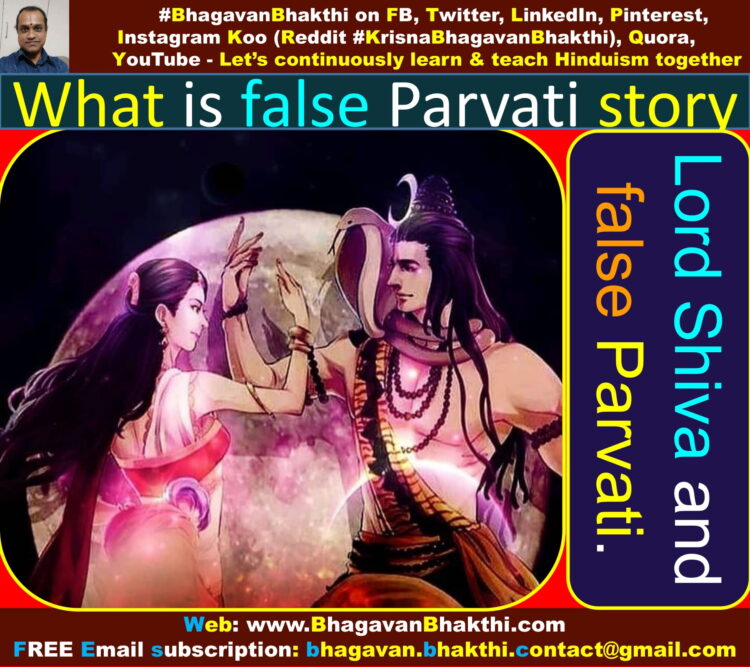 Lord Shiva did not realize that this was a false Sri Parvati Devi and he came forward to embrace the asura Adi.

But no sooner had Lord Shiva embraced the false Sri Parvati Devi, then the asura adopted his own form and tried to attack Lord Shiva.

Asura Adi told Lord Shiva, “I have a brother who is stronger than me. He will return here in the form of Sri Parvati Devi and will kill you.”

This was a blatant lie. As asura Adi had no brother. The real Sri Parvati Devi returned after finishing her tapasya / penance.

But Lord Shiva thought that this was demon disguised as Sri Parvati Devi.

Lord Shiva created many beings from his body, so as to kill the real Sri Parvati Devi. 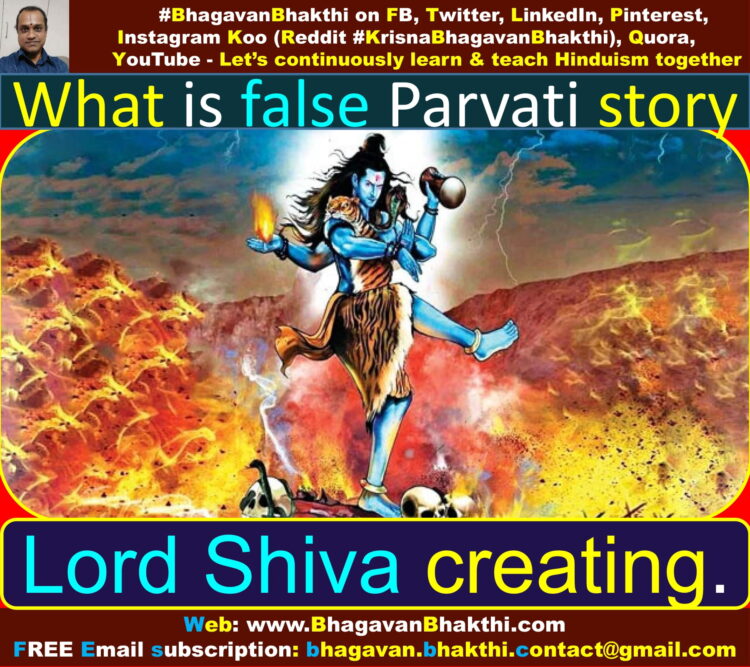 Similarly, Sri Parvati Devi also created many beings from her own body and these swallowed up Lord Shiva’s beings.

When this had gone on thousands of times, Lord Shiva realized that this must be the real Sri Parvati Devi.

To know more about “Lord Vishnu unknown facts“, please click the below link: