Just before moving towards to know about “How Shumbha, Nishumbha, Mahishasura were killed | Arunachaleshwar grace on Parvati“, let us know few basic and important information. 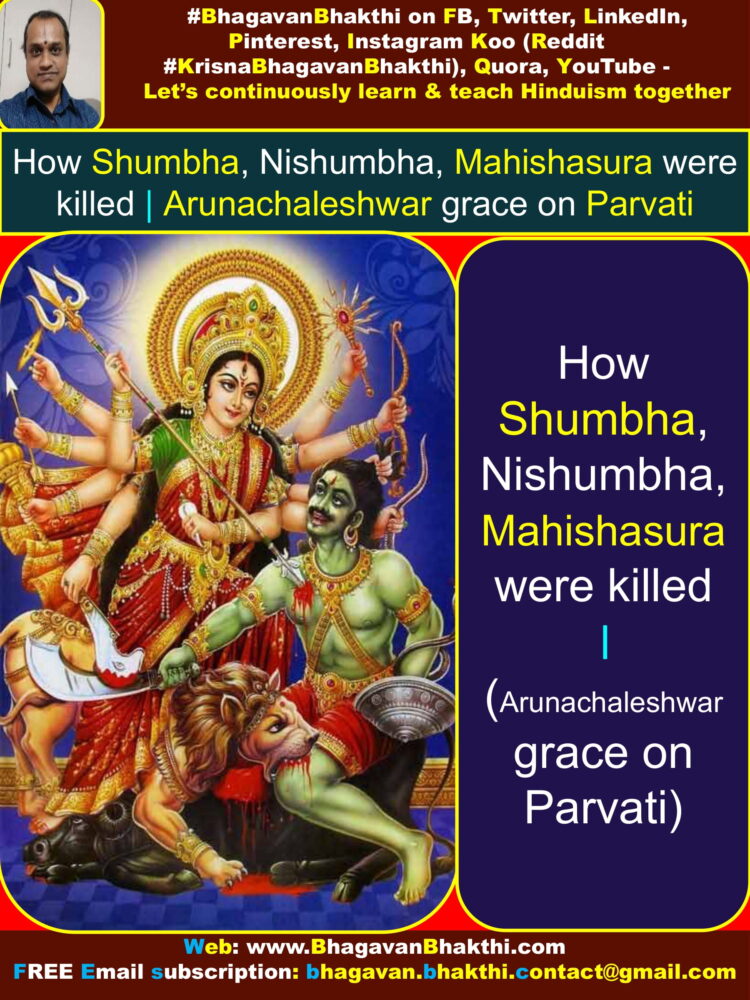 All the Devatas / Demigods went to Lord Shiva and requested for his help.

Lord Shiva assured them that both the demons would be killed at the opportune time.

The Devatas / Demigods were satisfied and returned back to their respective abodes. 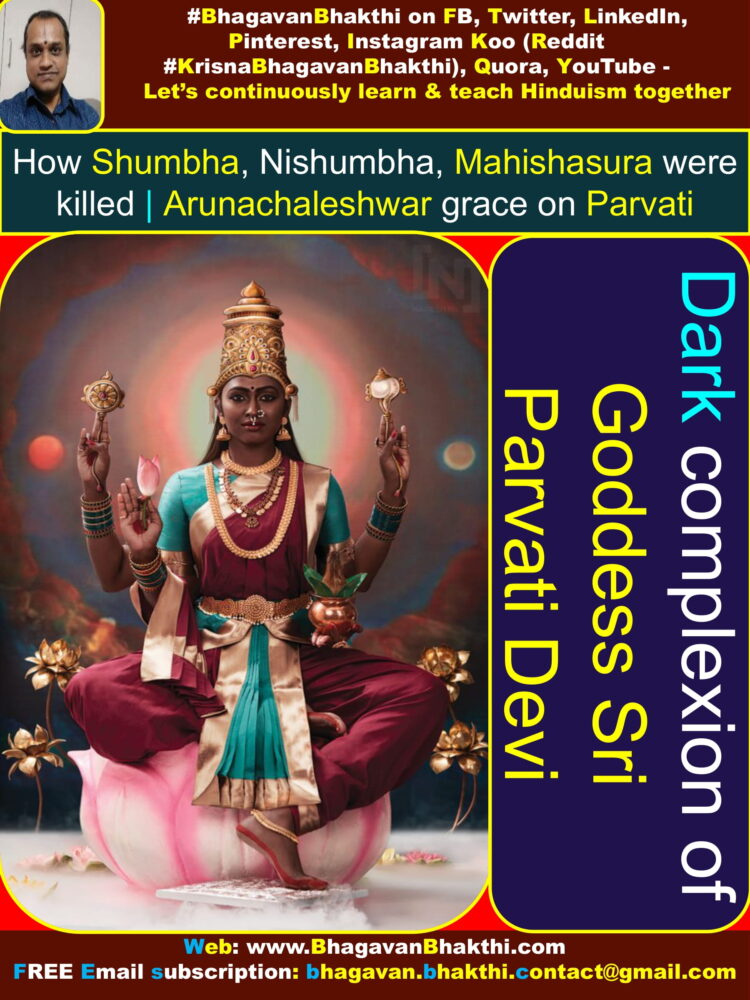 Goddess Sri Parvati Devi thought that Lord Shiva would be more affectionate towards her if she somehow discarded her dark skin.

Thus Goddess Sri Parvati Devi eventually discarded her dark skin at a place and it instantly got transformed into ‘Kaali Kaushiki’.

Goddess Sri Parvati Devi, then did an austere tapasya / penance at Vindhyachala mountain.

At that time, the very same two demons Shumbha and Nishumbha were living there.

When both the demons saw goddess ‘Kali Kaushiki‘, her divine beauty infatuated them.

But Goddess Kali Kaushiki ultimately killed both of them.

Having accomplished her mission, Kali Kaushiki did a tremendous tapasya / penance at ‘Gauri-peak‘ and regained her fair complexion. 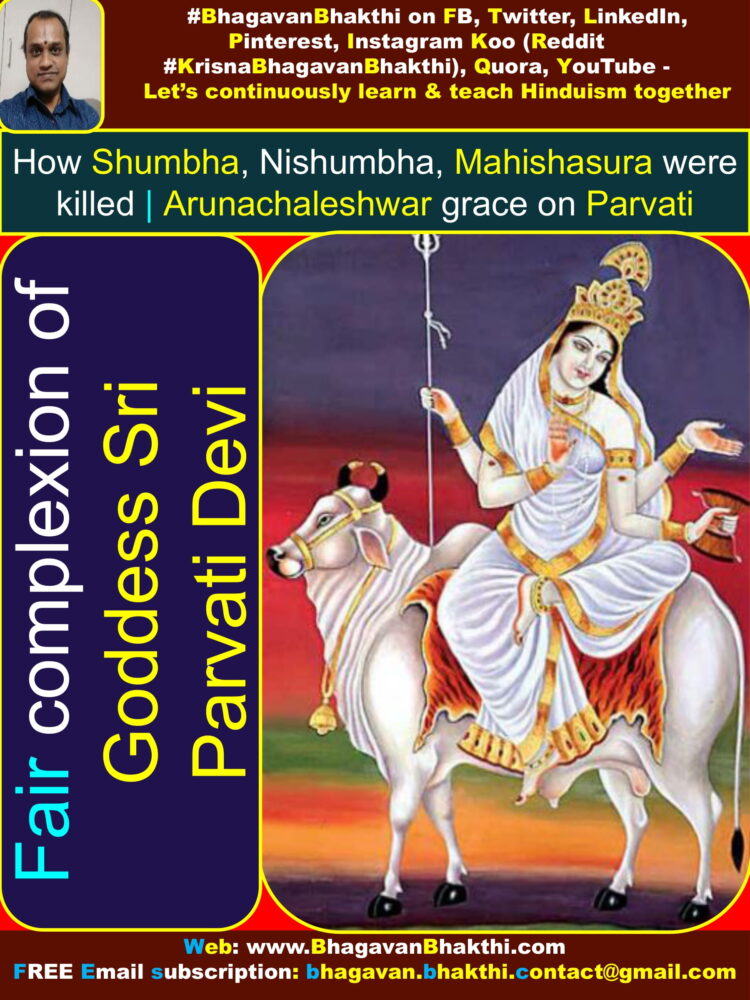 In course of time, she became the mother of Lord Ganesh and Lord Kartikeya.

Goddess Sri Parvati Devi was so enchanted by the scenery over there that she decided to do penance.

Goddess Sri Parvati Devi also ordered the two goddesses Subhaga and Dhundhukumari to keep a watch in all directions.

Mahishasura, the demon sent a female messenger to convince Goddess Sri Parvati Devi into marrying him.

The female messenger disguised herself as a female hermit and tried to impress all the three goddess who were keeping surveillance by praising the glory of Mahishasura:

‘O beautiful ladies! Why is your mistress living in such a secluded place?’

‘She is worthy of living in a royal palace. There is nobody among the deities who is fit enough to marry her.’

She continued: ‘But, Mahishasura, the lord of all the three worlds is certainly fit to become her husband.’ 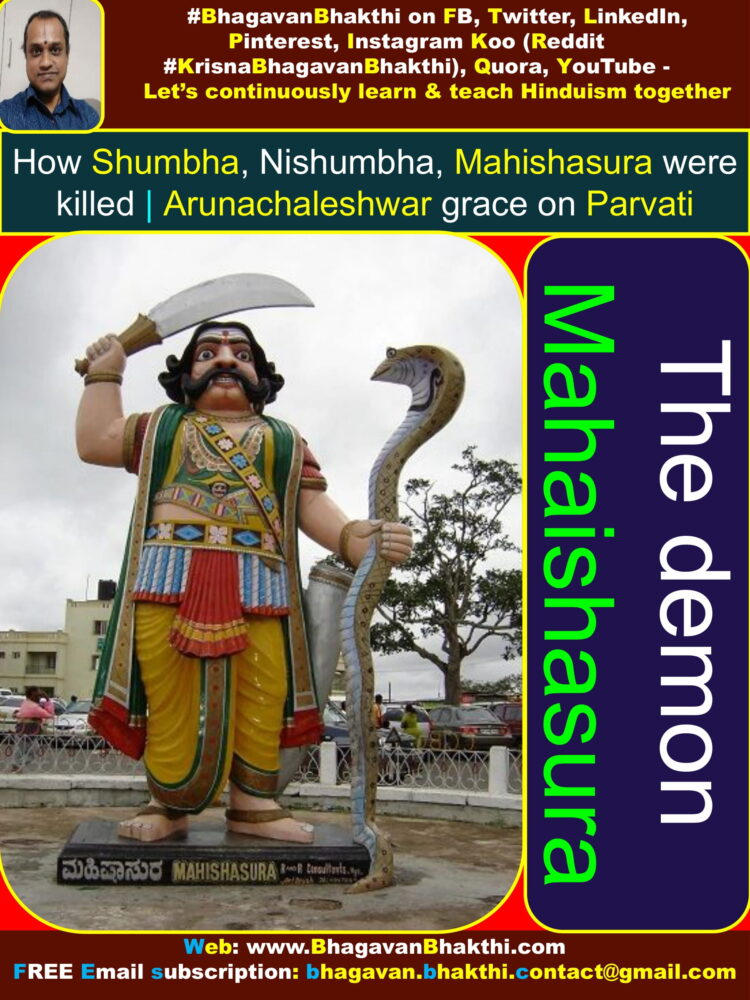 But all the three goddesses drove the female messenger away.

Goddess Sri Durga Devi was well equipped with all sorts of lethal weapons and was mounted on a lion. 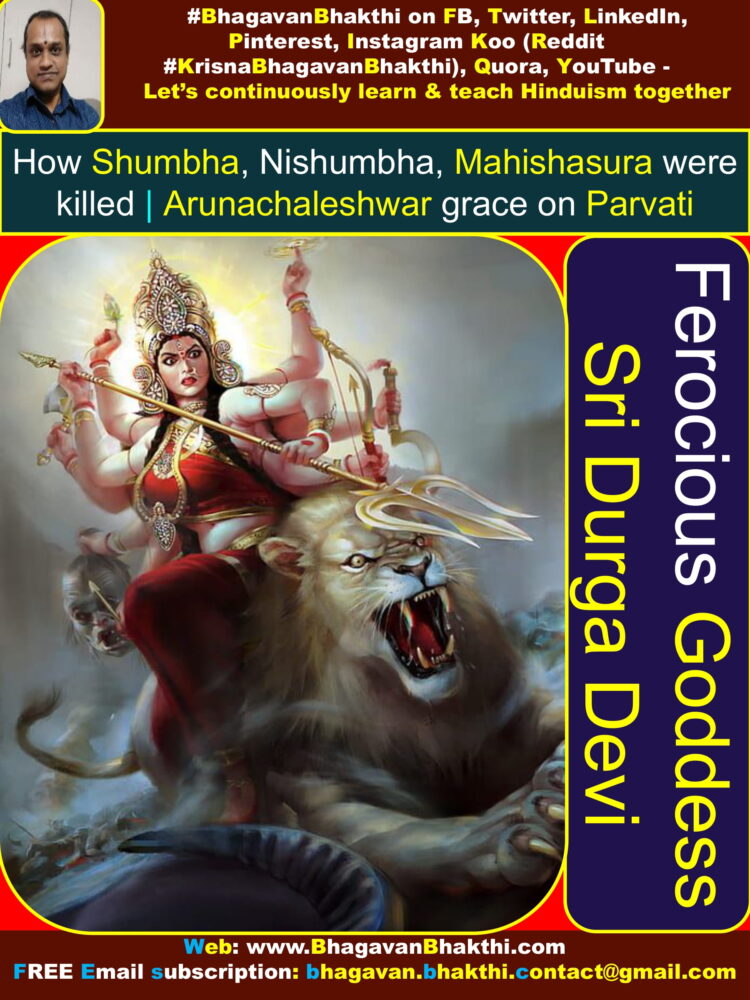 She thundered loudly and challenged Mahishasura.

Countless ‘yoginis’ manifested from her body. These yoginis attacked Mahishasura’s army and killed many demons.

The whole battlefield was splashed with blood.

Mahishasura was enraged and he attacked Goddess Sri Durga Devi.

Some other demons like Prachanda, Chamara, Mahamauli, Mahahanu, Ugravaktra, Vikataksha and Dahana also came forward to help him, but each one of them was killed by Goddess Sri Durga Devi. 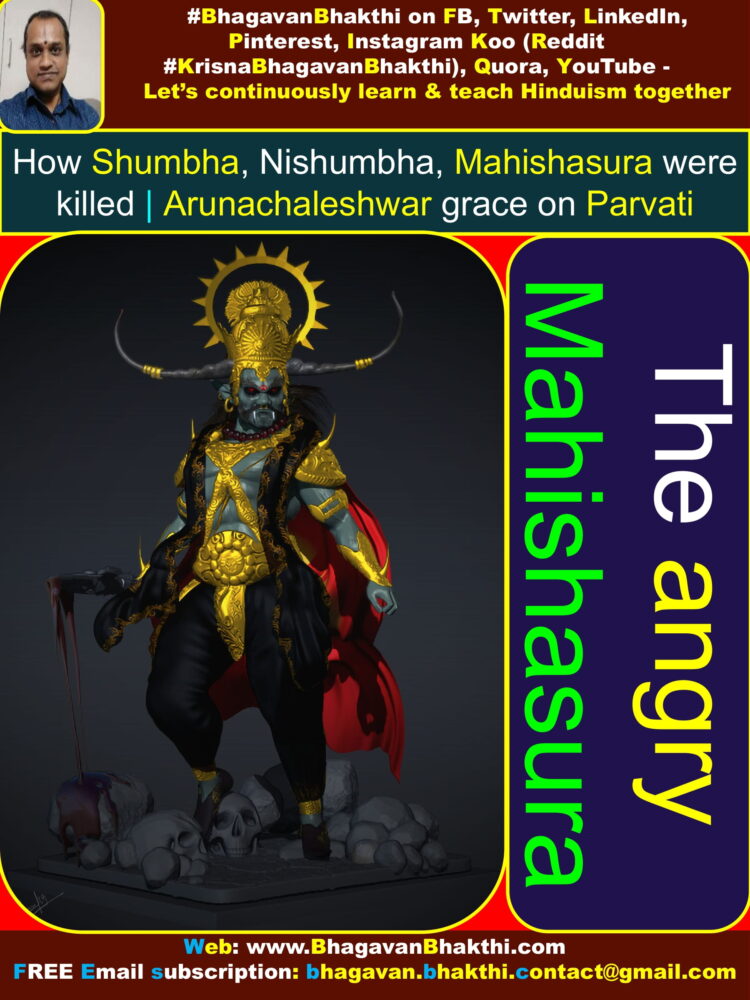 A severe battle was fought between both Goddess Sri Durga Devi and Mahishasura.

When Mahishasura realized that the goddess was dominating the battle, he started changing his guises frequently.

Mahishasura tried to dodge Goddess Sri Durga Devi by transforming his appearance into that of a boar.

But, goddess Durga kept on chasing him. Then, Mahishasura became a lion.

This way he kept on changing his appearances frequently to avoid getting killed by Goddess Sri Durga Devi.

Once he transformed himself into a buffalo but Goddess Sri Durga Devi attacked him.

This way, Mahishasura was forced to change his appearance frequently on account of relentless attack by Goddess Sri Durga Devi. 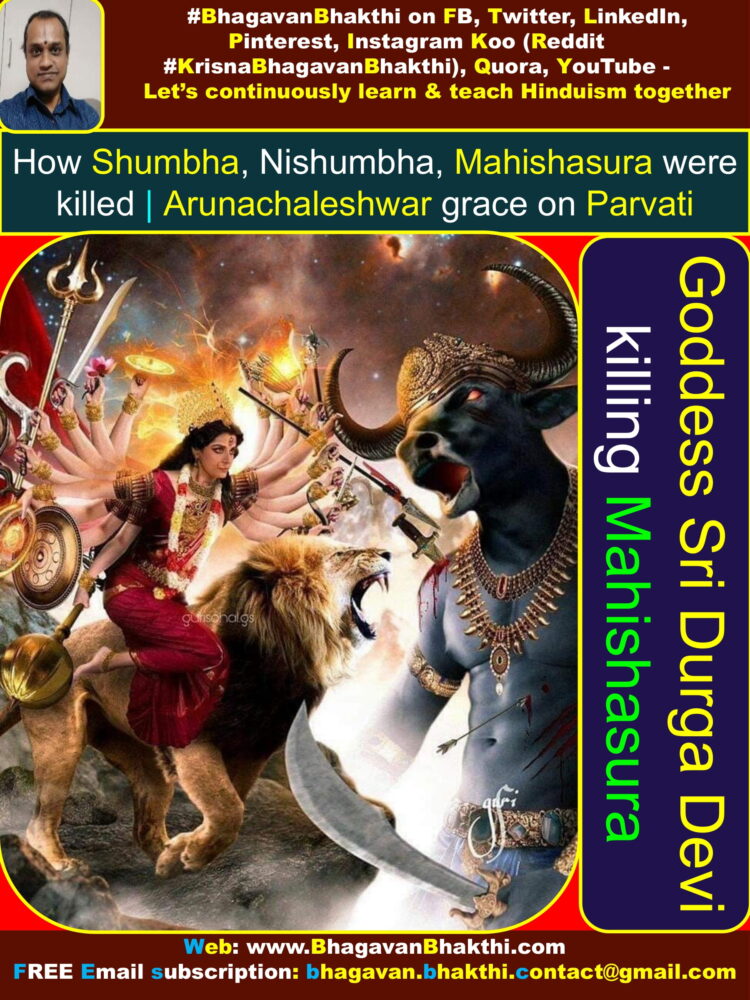 The Devatas / Demigods were relieved at the death of Mahishasura.

Goddess Durga then went to the place where Goddess Sri Parvati Devi was still doing penance.

Goddess Durya held Mahishasura’s head in one hand and a sword in the other.

‘If it were not for you, I would not have been able to accomplish my own penance.’

Goddess Sri Parvati Devi continued: ‘Now, you should get rid of this skull and create a holy spring bathing in which would destroy your sin acquired by killing Mahishasura.’

A large pit was created which was soon filled up with underground water.

She then took her bath in it by chanting OM NAMAHA SHONADRINATHAYA.

In the meantime, an amazing incident took place.

While Goddess Sri Durga Devi was taking her bath with Mahishasura’s skull in her hand, a Shivalinga, which was struck in Mahishasura’s throat fell down. 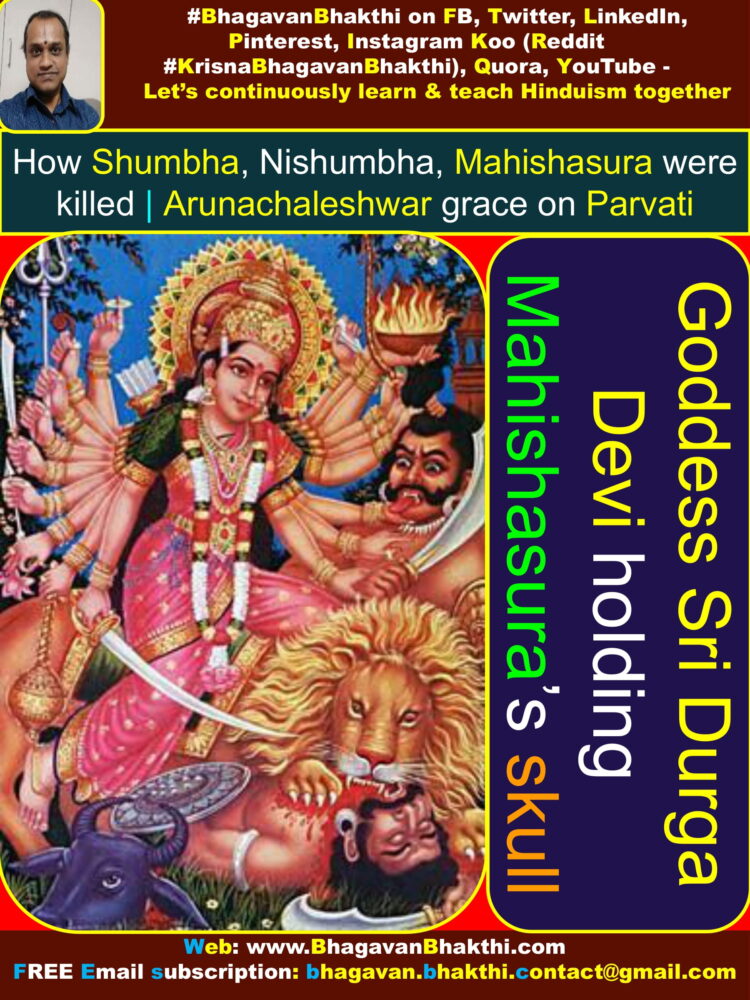 This Shivalinga later on became famous as ‘Papanashana Shivalinga’. She then released the skull and came out from the pond.

Lord Arunachaleshwara then made Goddess Sri Parvati Devi to sit by his left side.

The next moment Goddess Sri Parvati Devi’s identity mingled with that of Lord Arunachaleshwara.

The place where this incident took place, there is situated a grand temple of Goddess Sri Apitastani Devi (Unnamalai Amman) and Lord Arunachaleswara. 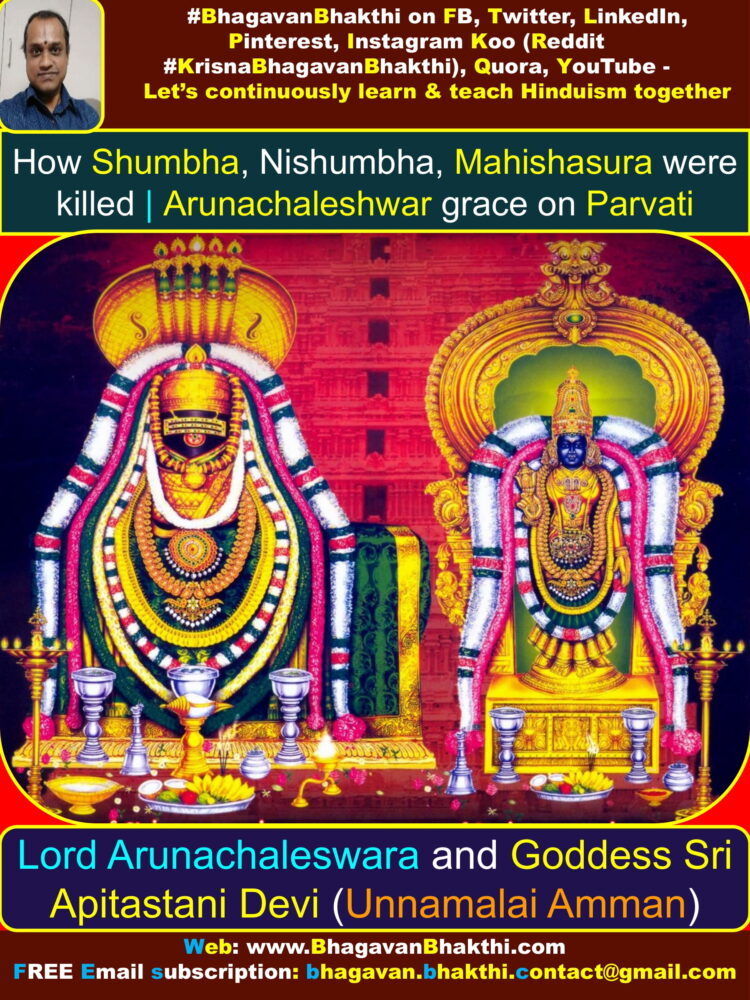 PS: We should always remember that, whatever happens will happen as per the wishes of Lord Sri Vishnu.

All are the followers of Lord Sri Vishnu, that is from Lord Sri Braham Deva, Goddess Sri Sarvasvati Devi, 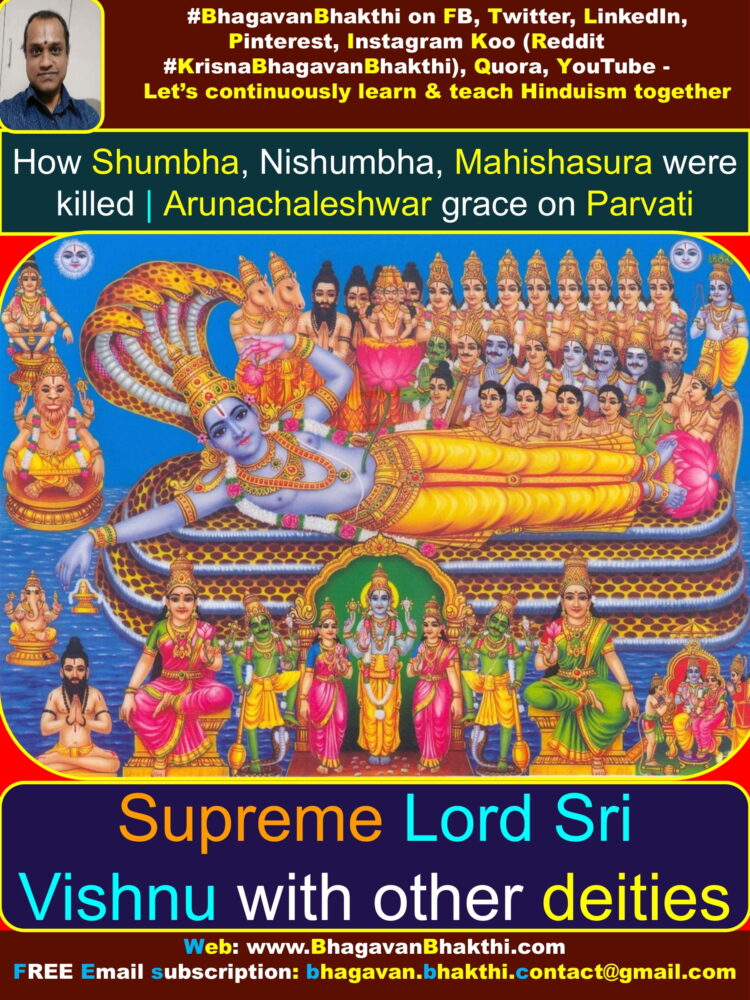 To know “Goddess Sri Durga Devi unknown facts and information“, you can visit this link to gather more information:

To know “Lord Shiva unknown facts and information“, you can visit this link to gather more information:

To know “Mahabharata unknown facts and information“, you can visit this link to gather more information:

To know more about “Hinduism important information“, please click the below link: