Just before moving towards to know about “What Goddess Lakshmi birth (correct) story (history) (facts)“, let us know few basic and important information. 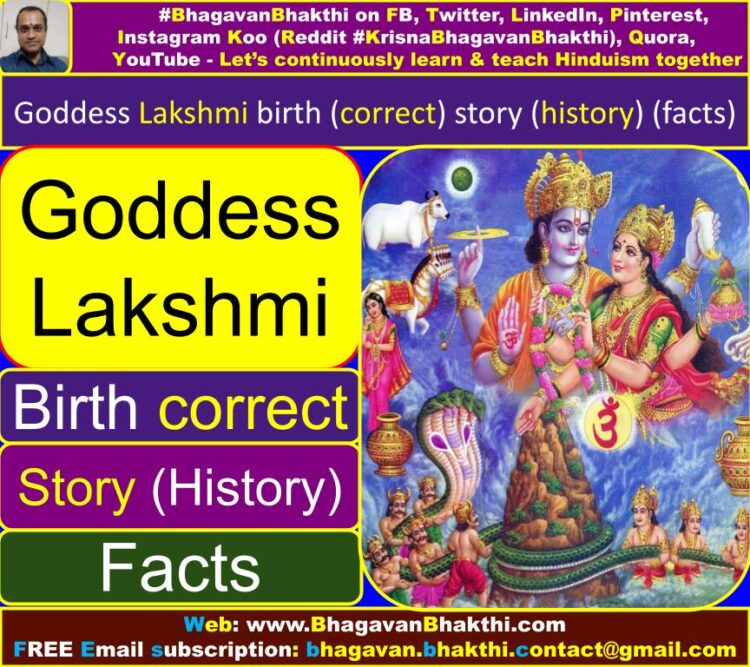 Name Lakshmi meaning – Lakshmi is someone who has all the divine lakshanas (लक्षण / lakṣaṇa) (qualities).

No one knows since how long both Lord Sri Vishnu and Goddess Sri Lakshmi Devi are living together.

Both Lord Sri Vishnu and Goddess Sri Lakshmi Devi’s abode is the most divine Vaikuntha. 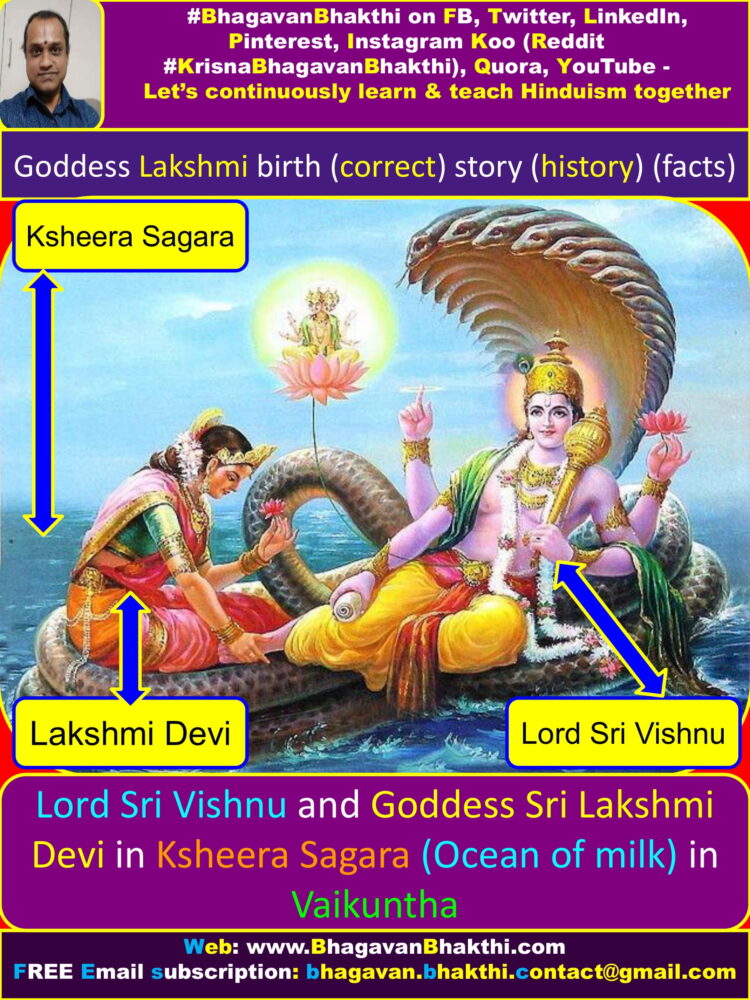 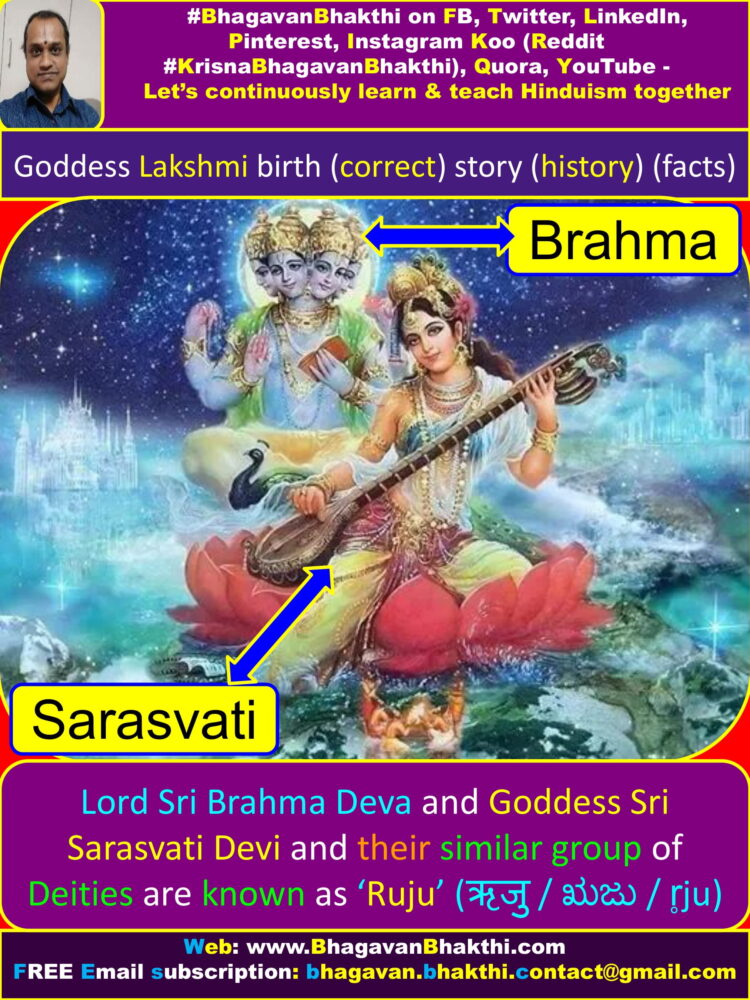 List of Goddess Lakshmi birth story (history) (facts) are as given below:

This is not Goddess Sri Lakshmi Devi’s first avatar

And many more as given below… 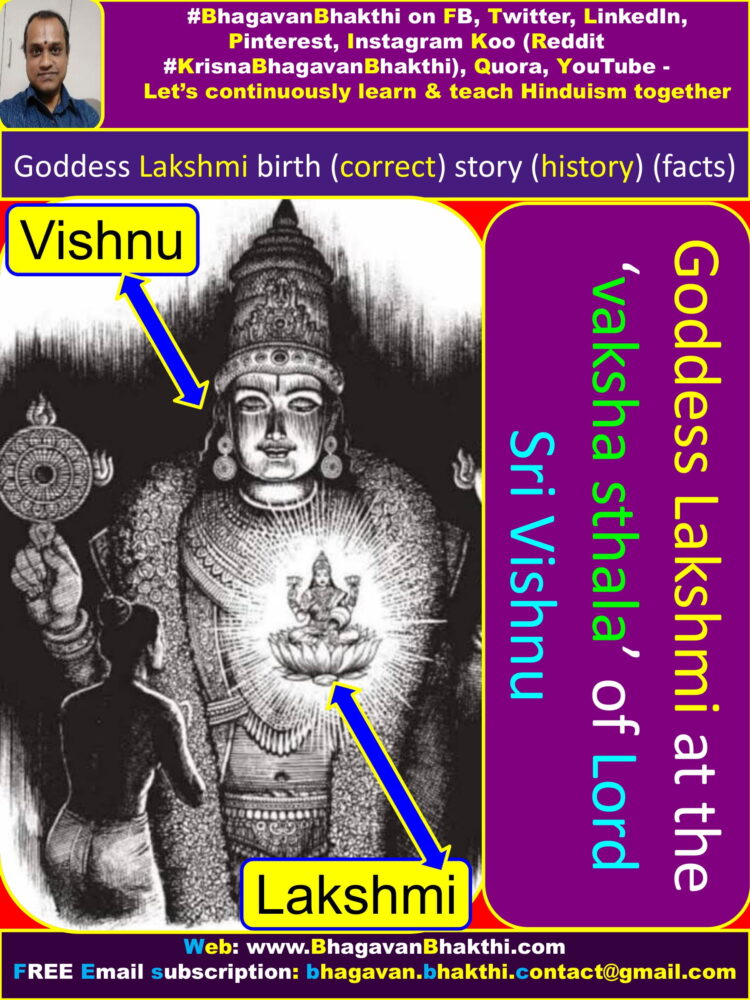 Once Pitamah Bhishma expressed his desire to know about the manifestation of Goddess Sri Lakshmi Devi to Maharisi (Sage) Pulastya.

Thus Maharishi (Sage) Pulastya replied— Once, after being defeated by the demons, the deities (Devatas / Demigods) went to Lord Sri Vishnu and sought his help.

Lord Sri Vishnu instructed them to collect all the medicinal herbs, and put them in the Kshira Sagara (Divine ocean of milk).

So that after the manthan (churning), the ocean’s amrita (ambrosia) could be retrieved. 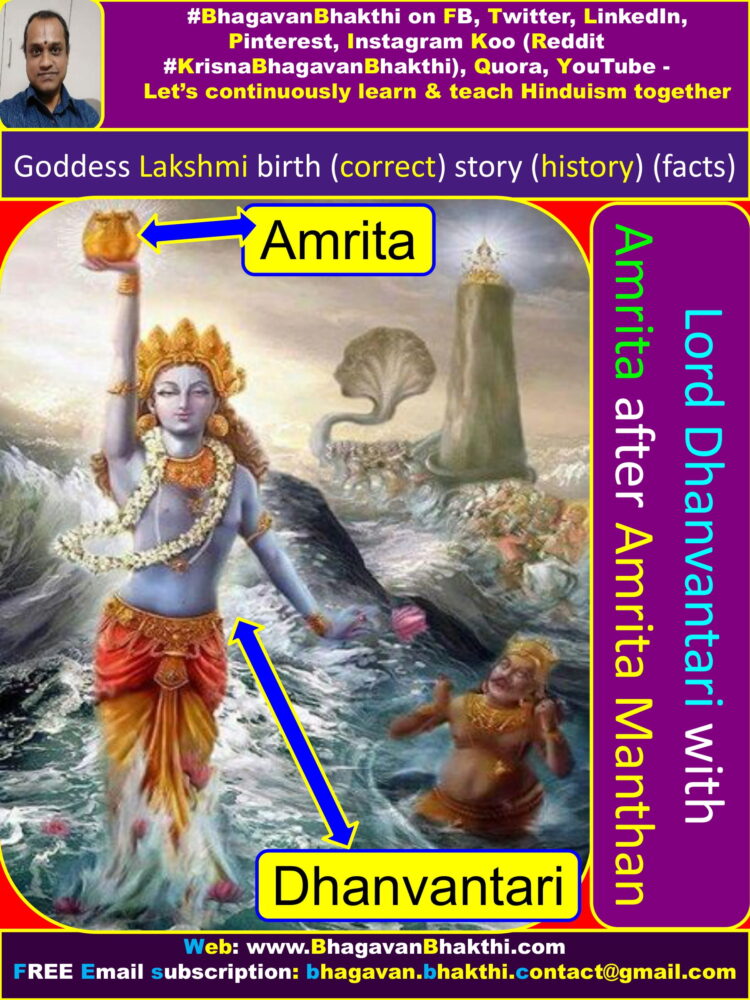 Lord Sri Vishnu also advised them to use the Mandara Parvata (Divine mountain) as a Churner and the Serpent Vasuki as a rope for churning the ocean.

(Note : Vasuki = He is the same serpent which will be hanging on Lord Shiva‘s neck.) 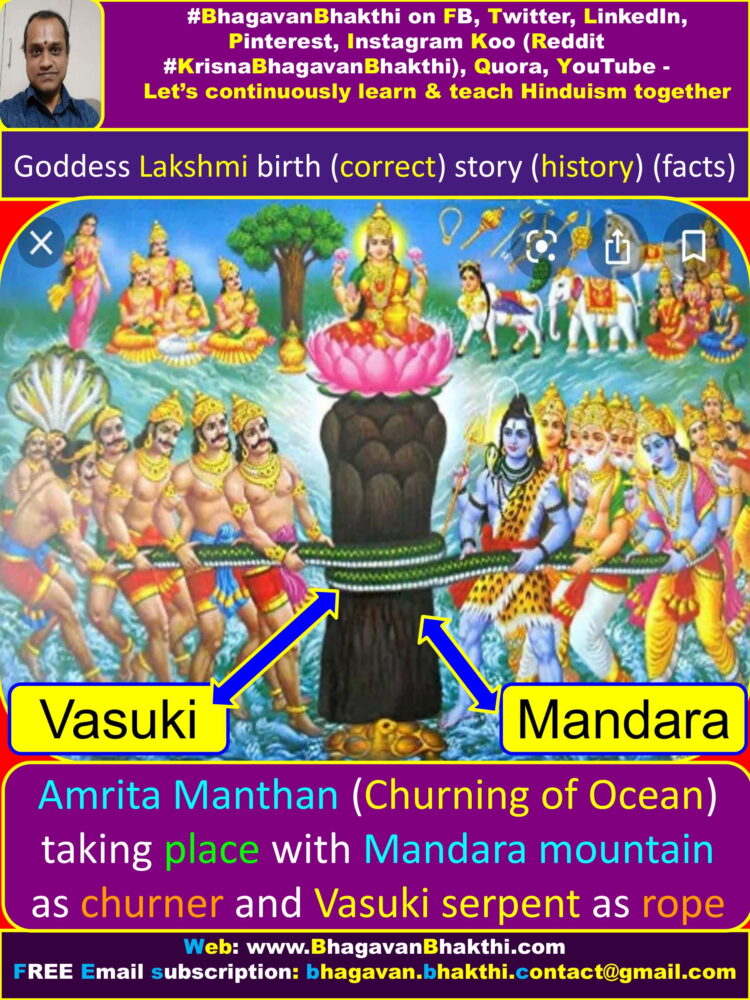 The deities (Devatas / Demigods) then reached an agreement with the demons, according to which both the groups were supposed to unitedly churn the ocean (Samudra Manthan).

The great Mandara Parvata was uprooted and placed on the back of the Kurma (Tortoise avatar) (Lord Sri Vishnu / Hari in his Lord Sri Kurma avatar) — the embodiment of Lord Sri Vishnu.

Serpent Vasuki coiled around that Parvata (mountain Mandara) and both the ends were held by the demons and the deities (Devatas / Demigods) respectively.

The deities (Devatas / Demigods) intelligently chose the tail-end, while the demons in their foolishness chose the mouth-end. 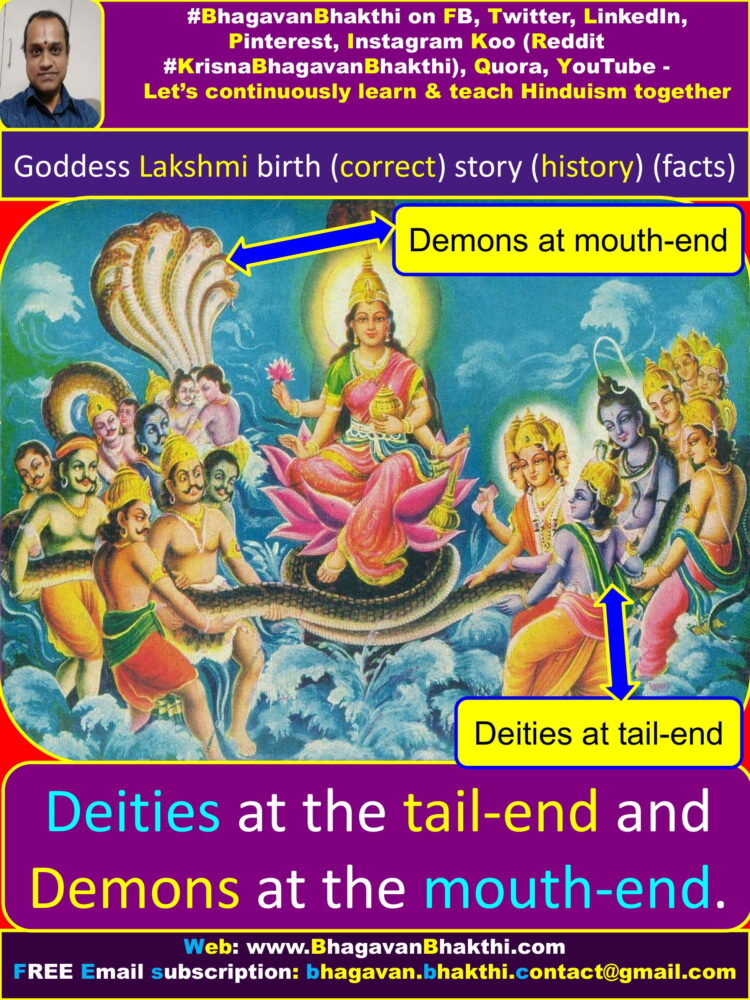 The Pashanam (poison) spilled by Serpent Vasuki destroyed the power and strength off the demons.

When the process of Churning (Sagara Manthan) began, the first thing to emerge from the sea-bed was Kamadhenu, that is, the holy and divine cow.

The deities (Devatas / Demigods) claimed the ownership of this divine cow Kamadhenu.

Subsequently, Varuni (Intoxicating drink) emerged from the sea-bed, which was claimed by the ignorant demons.

During the process of ocean-churning (Samudra Manthan), various kinds of things emerged out from the ocean, that is –

Parijata Tree, sixty crore apsaras, the moon and the Kalakuta (Halahala) (poison), which were distributed among the demons and the deities (Devatas / Demigods).

Lord Sri Mahadeva (Lord Shiva) drank some part of the Kalakuta (Halahala) poison and most part of this Kalakuta poison was drank by the Sri Vayu Deva (Air demigod). 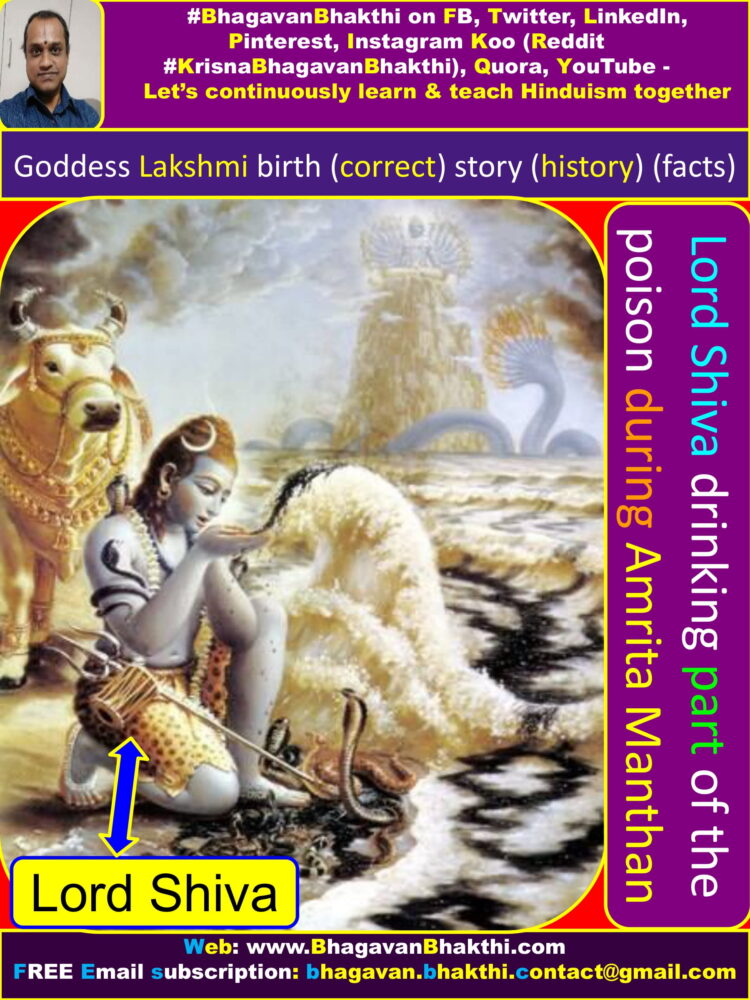 (Note : In TVs serials and movies it is shown that only Lord Shiva drank the Kalakuta (Halahala) poison.)

(But in reality and as per Puranas, maximum amount of the Kalakuta (Halahala) poison was drunk by Lord Sri Vayu Deva.)

(And only part of the Kalakuta (Halahala) poison was drunk by Lord Shiva.)

The churning of ocean (Samudra Manthan) also resulted into the manifestation of amrita (ambrosia), Uchchaishrava (Dive Horse) and Iravata (elephant). 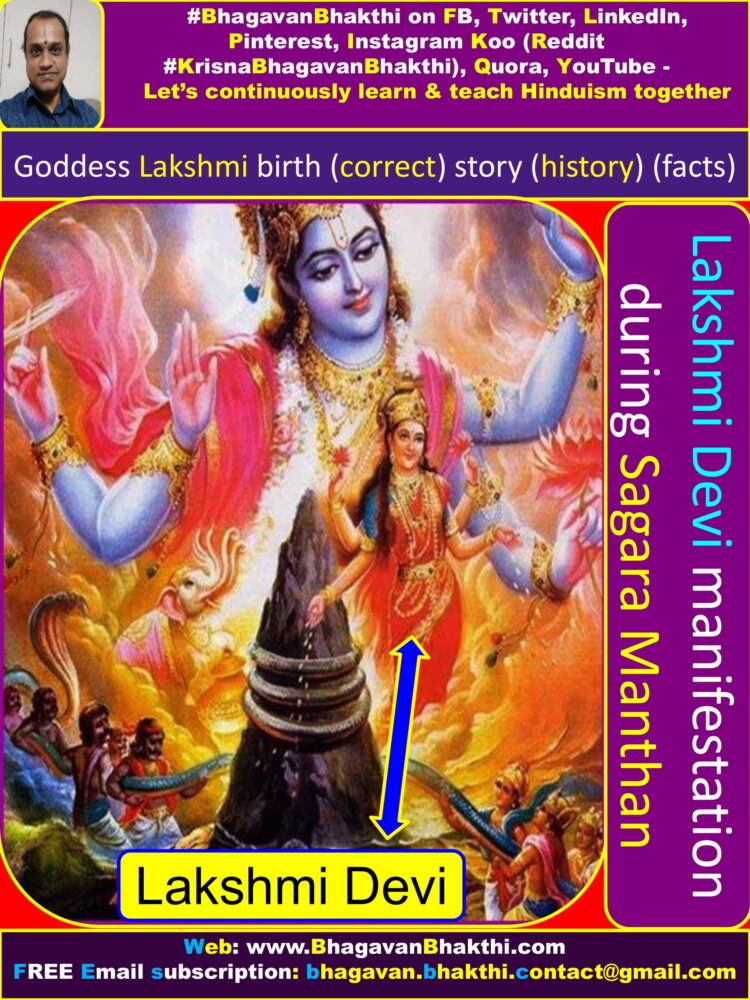 The deities (Devatas / Demigods) were desirous of having Goddess Sri Lakshmi Devi on their side, so were the demons too. 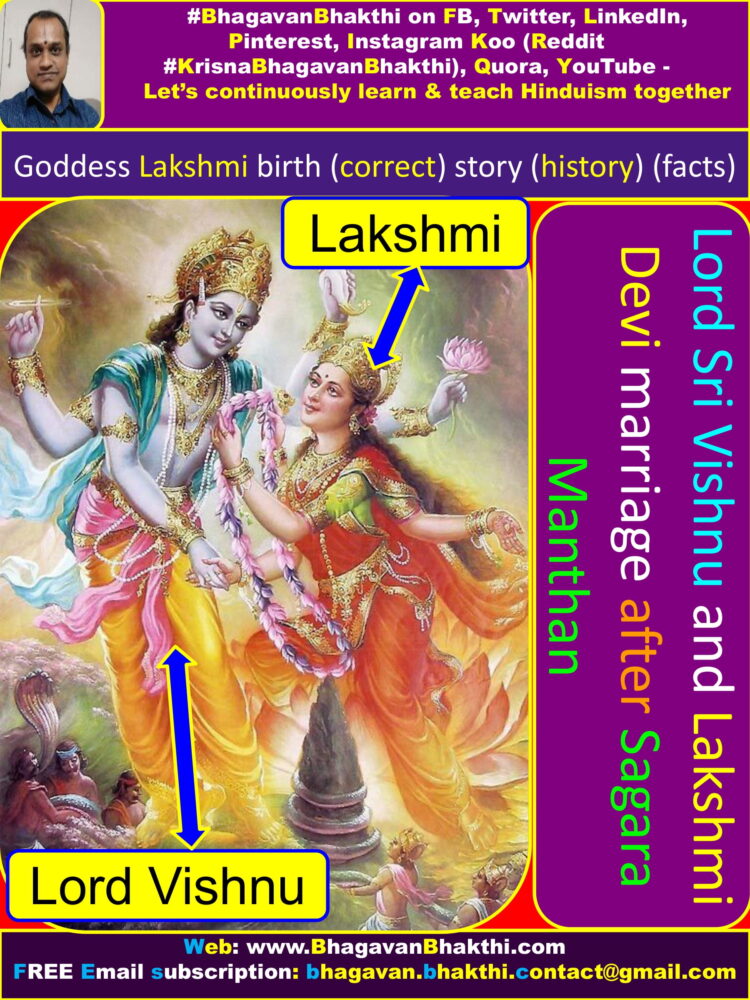 The demons became furious and snatched the amrita (ambrosia) pot from the hands of Lord Sri Dhanvantari (He is another avatar of Sri Vishnu).

(Dhanvantari meaning – Dhanvantari = Dhanva + Antari = All sufferings + Ender = He is someone who ends all the sufferings including diseases, fear, etc.)

(Dhanvantari is one of the infinite number of avatars of Lord Vishnu.) 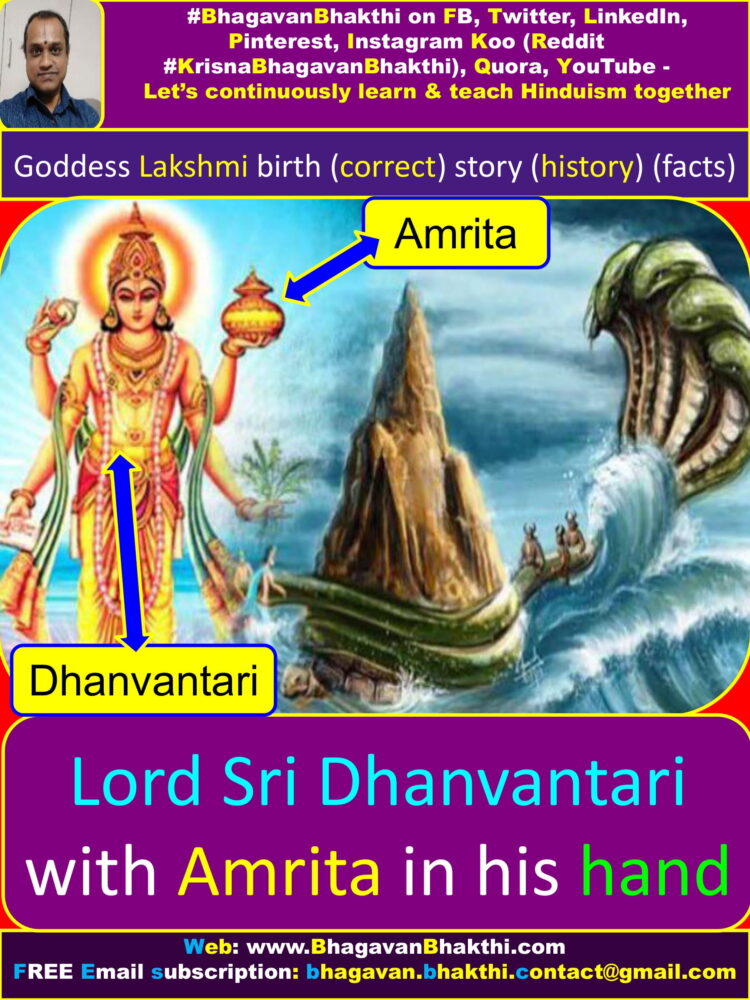 Lord Sri Vishnu then disguised himself as the most enchanting divine woman (Goddess Sri Mohini Devi) and fooled the demons into giving back the amrita (ambrosia) pot.

(Mohini = Moha + ni = Illusion + Giver. She is someone who will give the illusion to ill-minded people / Demons.)

(There is no different between Lord Sri Vishnu and Mohini, as both are one and the same.)

(Mohini is one of the infinite number of avatars of Lord Sri Vishnu, similar to Lord Sri Krishna, Lord Sri Rama, etc.) 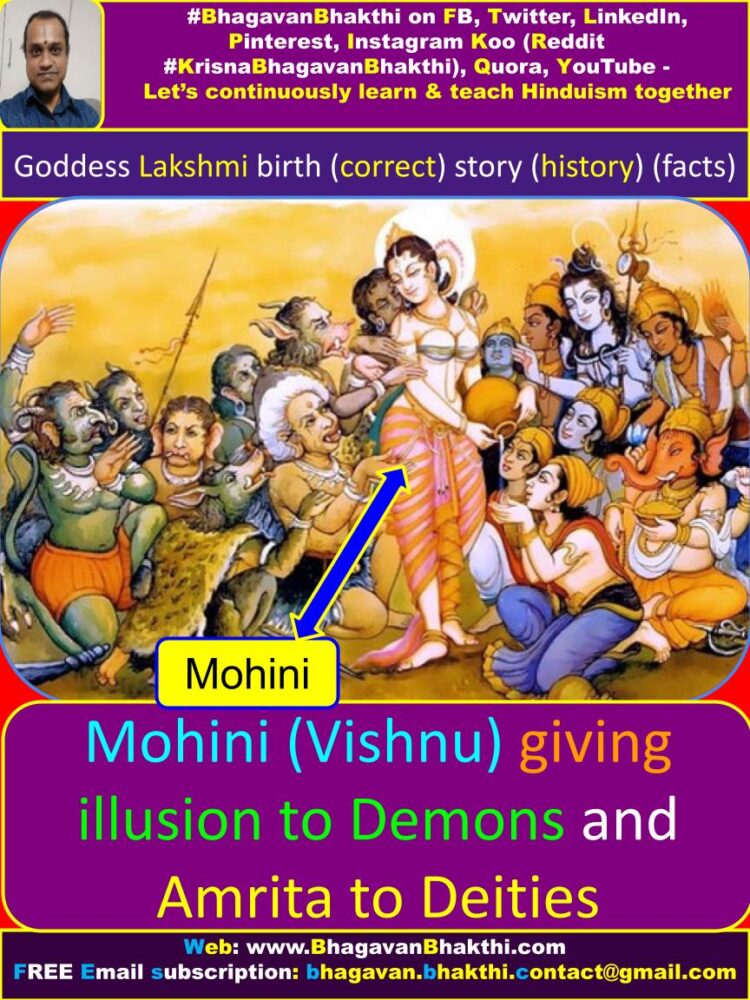 (Note : Here we should note that, Chiranjivi means ‘with very long life span’ and doesn’t has the meaning won’t die.)

(Chiranjivi = Chira + Jeevi = Very Long + Living. The same Chiranjivi itself proves that, it is having very long life span and not won’t die.)

A tremendous battle was fought between the demons and the deities (Devatas / Demigods).

But, the demons were defeated in this battle and they all fled to the netherworld (Patala and other lower planets) to protect their lives. 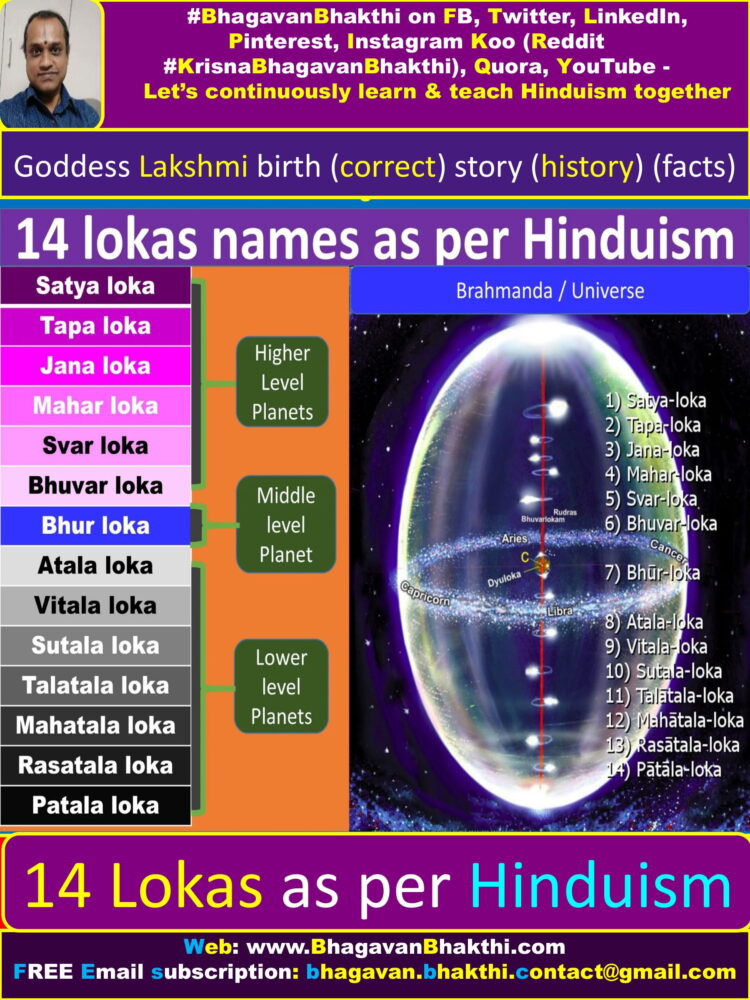 The deities (Devatas / Demigods) eulogized Lord Sri Vishnu for helping them and returned to their respective abodes.

PS: Here we should note a most important point, that is, this manifestation / birth of Goddess Sri Lakshmi Devi is one of the avatars.

For example: just like Goddess Sri Sita Devi or Goddess Sri Rukmini Devi, and it is not that she took birth for the first time in this avatar.

Nobody knows about her birth other than Lord Sri Maha Vishnu and not where it is mentioned about the first birth of Goddess Sri Lakshmi Devi. 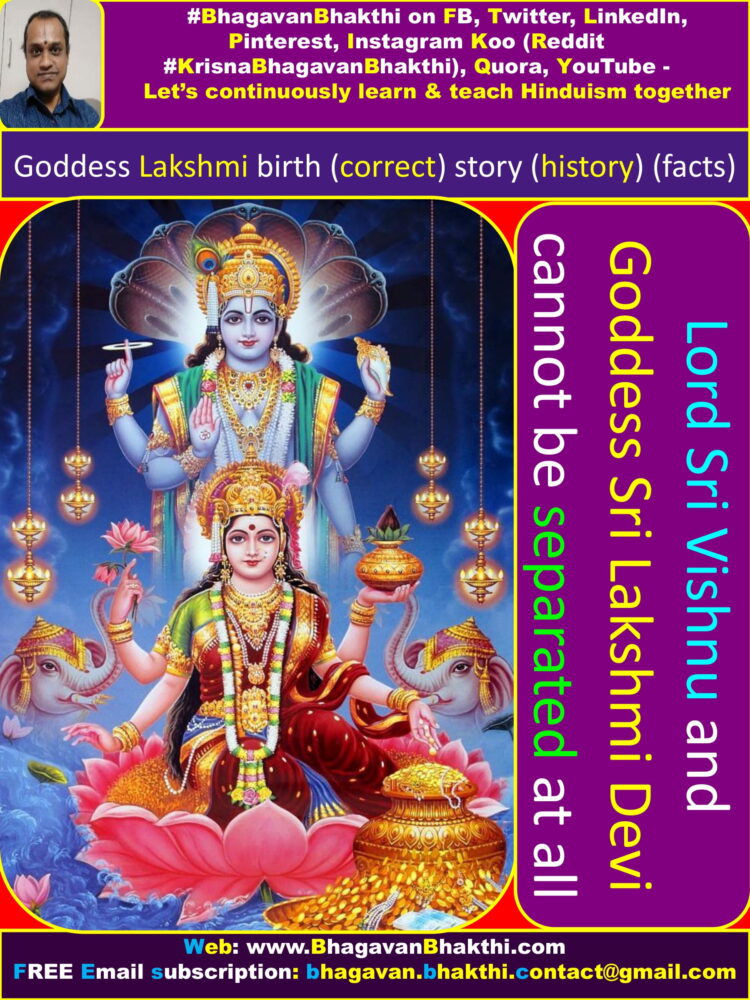 More information will be added to this on regular basis.