Why cleaning & lighting at temple is important (Yajnadhvaja story)

Many years ago, there used to be a Maharaja named Yajnadhvaja. He was born in the Chandra Vamsha.

The king was a great Bhakta of Bhagavan Sri Vishnu. He got all of Vishnu’s temples cleaned regularly. He made sure that Deepas (lamps) were lit in the Devastanas (temples) at night.

Yajnadhvaja also had a temple to Vishnu built on the banks of the river Reva.

There too, he made arrangements for the temple to be swept regularly. And he also made sure that deepas were lit in the temple at nights. 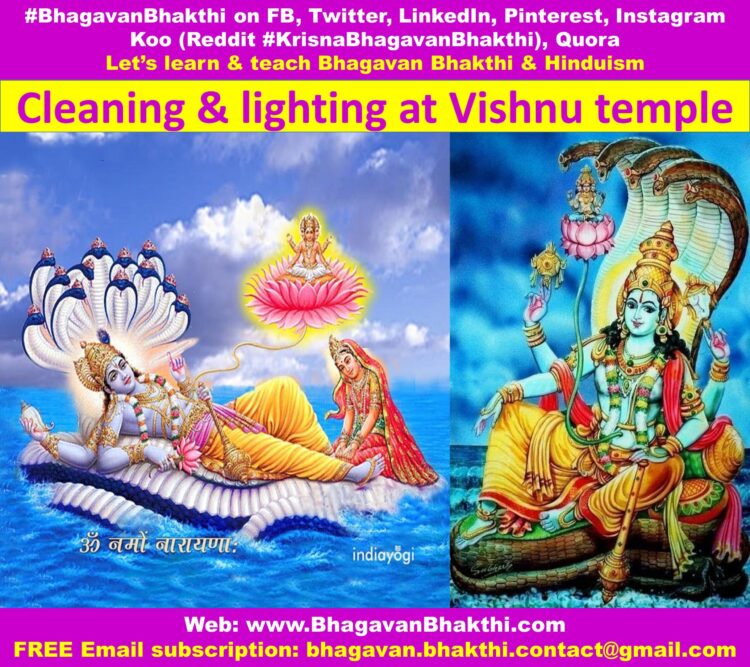 The Maharaja had a poojari (priest) named Vitahotra.

Vitahotra once asked the Maharaja. “Please tell me what is so special about cleaning temples and lighting deepas in them at night. There are many other tasks that are regarded as being sacred to Vishnu. Why do you devote special attention to these two tasks?”

“Let me tell you my story,” replied Yajnadhvaja.

The king remembered the story because he was a jatismara (someone who can remember his earlier lives).

Many years ago, in satya yuga, there was a brahmana named Raivata. The brahmana had studied the shastras well. Nevertheless, he acted as priest for people whom no brahmana should serve as priest.

Raivata was also cruel and he traded in goods that no brahmana should touch. Because of these evil ways, the brahmana’s friends and relatives deserted him.

Raivata had no opiton but to wander around from country to country. In a poor and diseased state, he finally died on the banks of the river Narmada.

Raivata’s wife was named Bandhumati. She too was evil and gave birth to a son named Dandaketu. This son also turned out to be a sinner.

One night, Dandaketu happened to turn up at a temple of Vishnu. He decided to spend the night there.

To clean a place for him to sleep at night, Dandaketu swept part of the temple with his clothing.

Although he did not realize it then, this act of piety pardoned many of his sins and gave him a lot of punya. 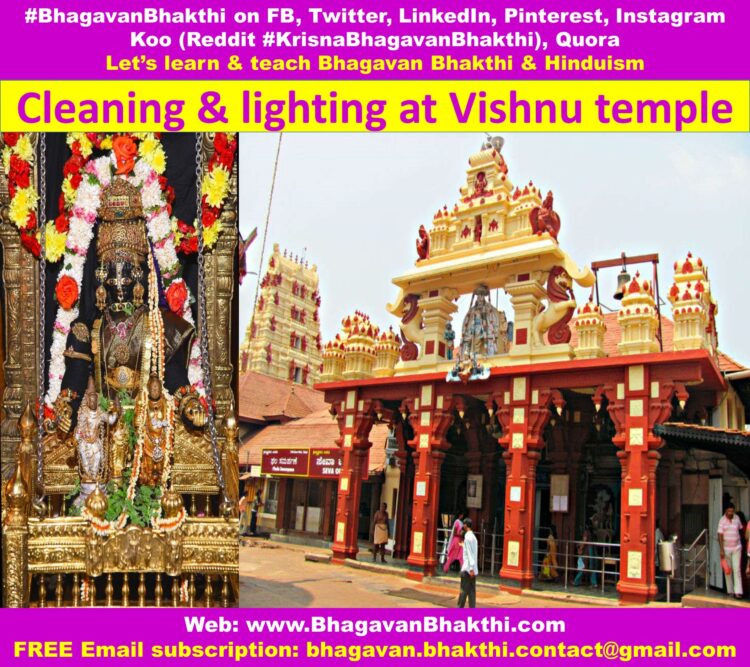 The sinner then lit a lamp so that he could see better. And this additional act of piety pardoned all his earlier sins.

Meanwhile, the city-guards arrived at the temple. They took Dandaketu to be a thief and killed him. But since Dandaketu had now acquired such a lot of punya, a vimana descended and took him straight up to heaven.

After spending some time there, he was born again as the king Yajnadhvaja.

Yajnadhvaja told Vitahotra, “Now you realize the incredible amount of punya that I accumulated by sweeping a temple and lighting a lamp, there inadvertently.”

“Can you imagine what the punya would be like if I did these things consciously? Thankfully, I am a jatismara and I remember the events that transpired in my earlier life.”

“No wonder than that I devote so much of attention to the cleaning of temples and to the lighting of lamps there. I am sure that your question is now answered.”

Vitahotra marvelled at the story and became even more devoted to Vishnu.

If one wants to overcome the miseries of life, one has to pray to Vishnu. There is no other way. Great punya is also acquired by serving those who are devoted to Vishnu.

If a person serves Vishnu’s devotees, twenty-one of his ancestral generations ascend to heaven. All the gods and Lakshmi, the goddess of wealth, are ever-present in a house where Vishnu is worshipped. 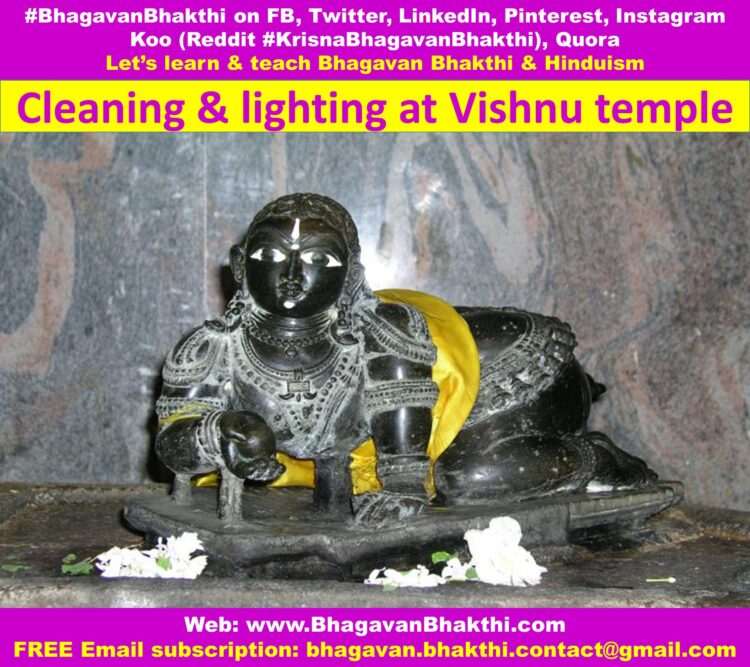 A house where the Tulasi plant, sacred to Vishnu, is planted, is eternally blessed. Also blessed is a house where there is a shaligrama, Vishnu’s image.