What are Lord Kartikeya (Subramanya) names (avatars) with meaning

Namaste friends, how are you doing today? Bhagavan Sri Vishnu, Lord Shiva and Lord Sri Subramanya blessings to you and your family!

Just before going to know about “What are Lord Kartikeya (Subramanya) names (avatars) with meaning”, let us have a brief about Lord Sri Subramanya.

Lord Sri Subramanya has two consorts and their names are Devasena or Devayanai and Valli.

Other names of Lord Sri Subramanya are Kartikeya, Skanda, Kumara, Murugan, Shanmukha, etc. His main abode is in Kailasha. His mount is a divine peacock. His day of worship is on Tuesdays. His loving color is red. 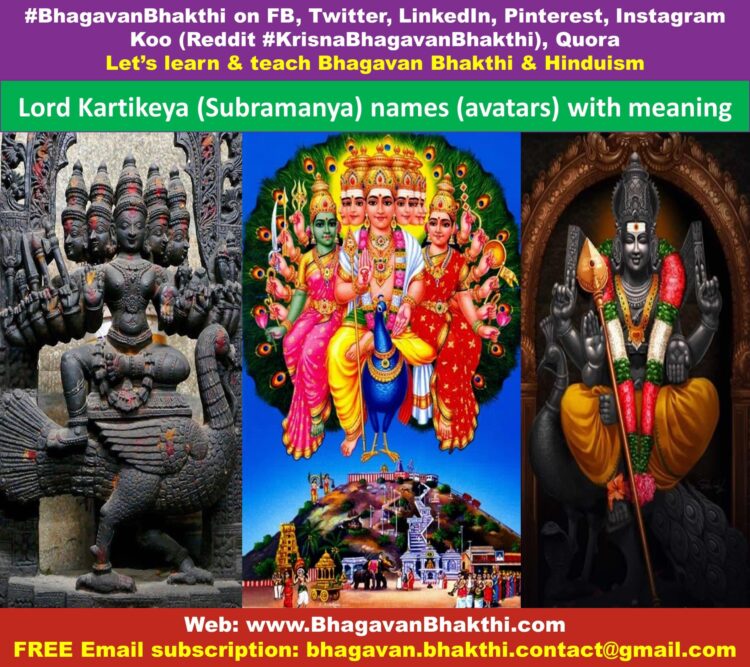 Lord Sri Subramanya is a very popular Deity in Hindu Sanatana Dharma and he is worshiped across the country especially in South India.

As said above, he is the younger son of Lord Shiva and Sri Parvati Devi. Lord Sri Subramanya is the commander-in-chief of army of Gods and he is the one who slayed the demon Tarakasura.

Lord Sri Subramanya is having an unique and important place among the Bhagavan Sri Vishnu and other Devatas (Demigods). He is associated with all the Trimurtis, that is, Trinal Gods.

Lord Kartikeya (Subramanya) names (avatars) with meaning are as below: 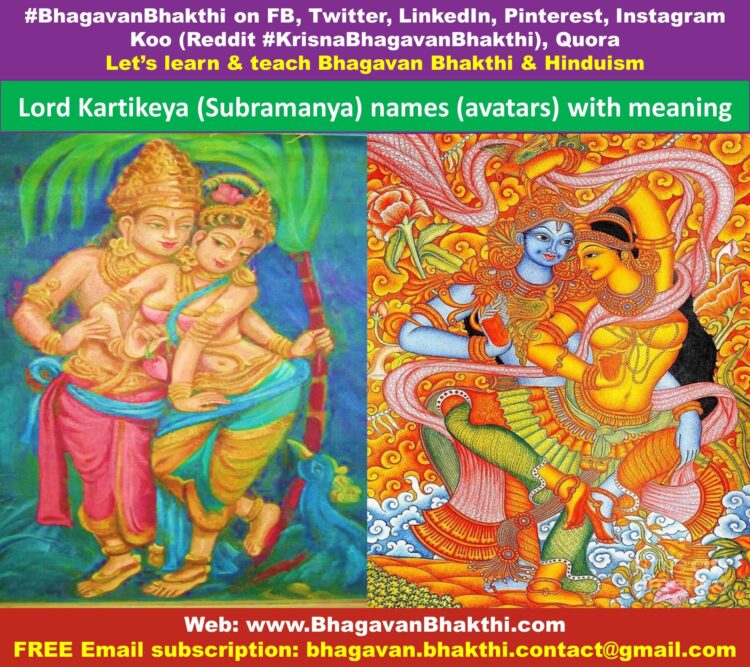 2. Sanatkumara : Then later he takes the avatar as Sanatkumara as the son of Sri Brahma Deva (Born as the Manasa Putra / born from the mind). 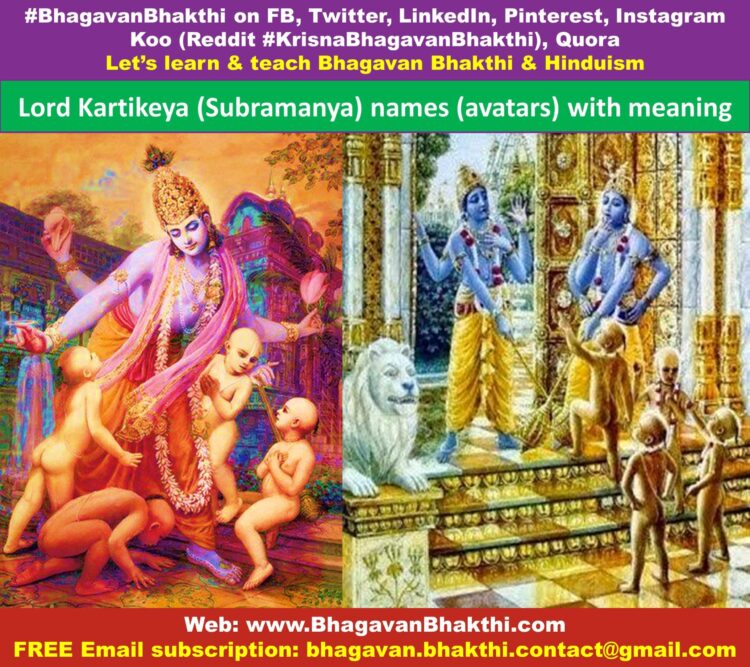 3. Skanda : Again later, he is born as Skanda as the son of Lord Shiva. 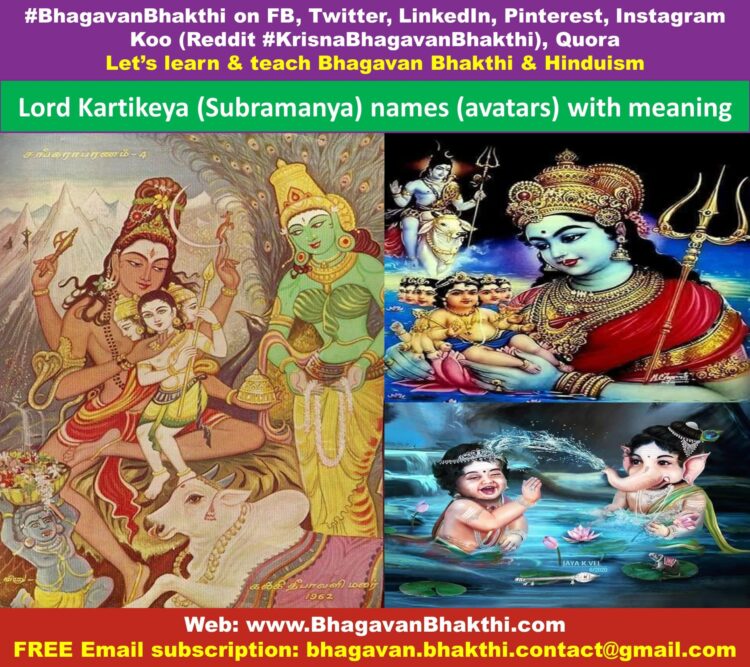 4. Bharata : As the brother of Bhagavan Sri Rama. 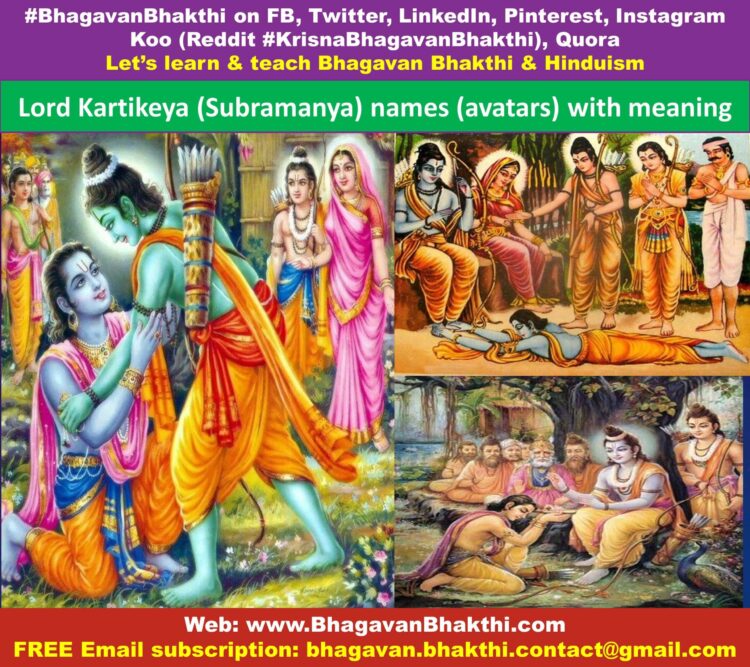 5. Samba : Born as the son of Bhagavan Sri Krishna & Sri Jambavati Devi (Her original name is Sri Rohini Devi. As she is the daughter of Jambavan, she is also known as Sri Jambavati Devi. She is an avatar of Sri Tulasi Devi.) 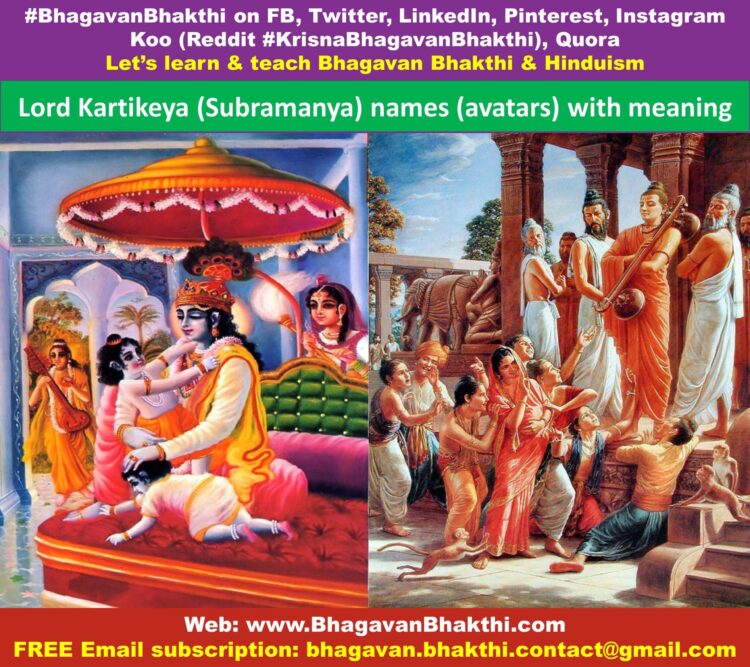 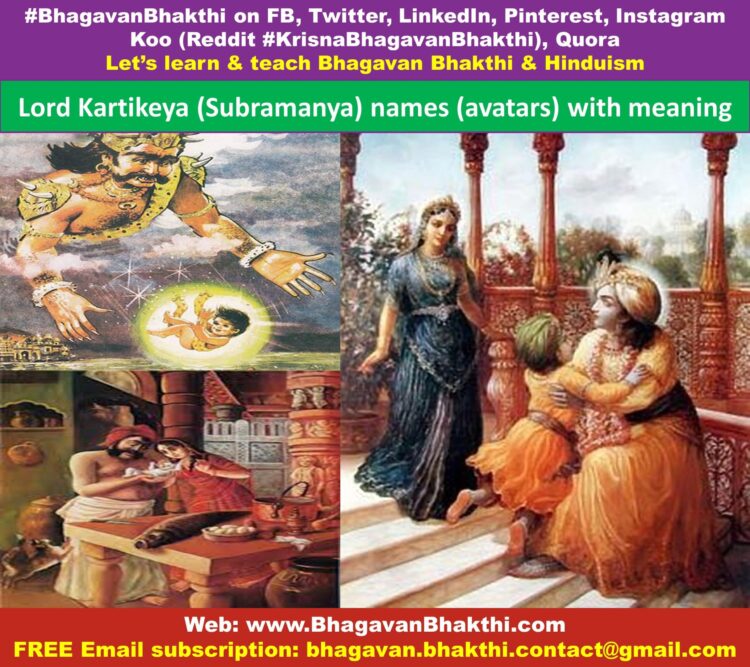 7. Sudarshana : Sudarshana is an avatar of Manmatha (Sri Kama Deva). The divine chakra (disc) which Bhagavan Sri Vishnu holds is the Sudarshana. 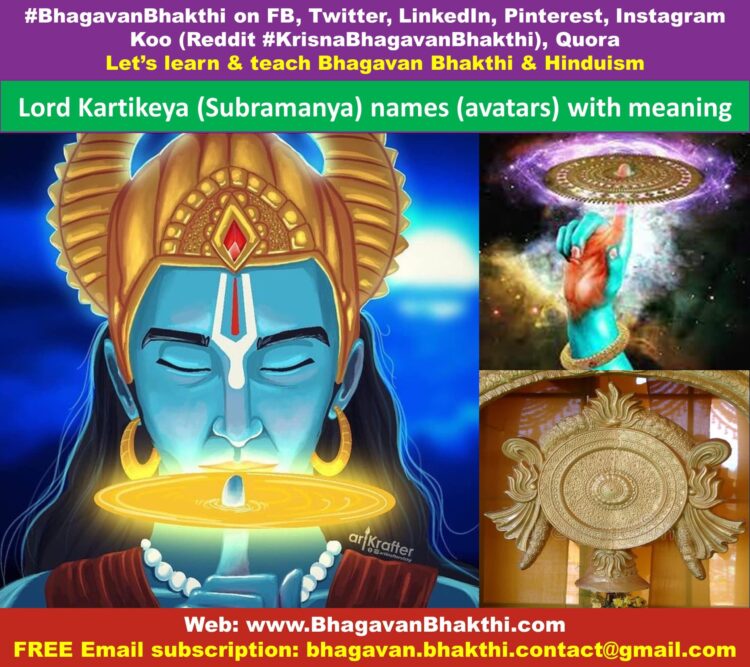 8. Shanmukha : Lord Sri Subramanya is also known as Shanmukha as he is having 6 faces. In Sanskrit ‘shan’ means 6 and mukha means face. 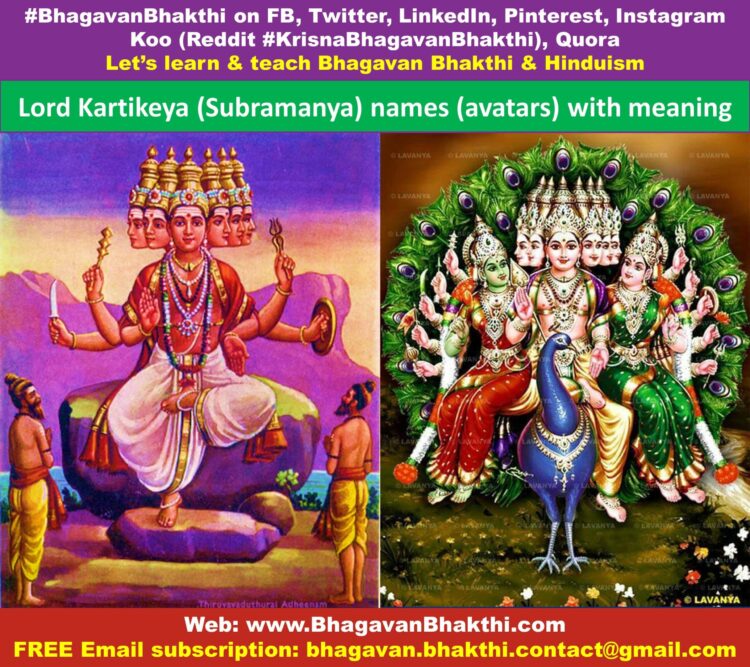 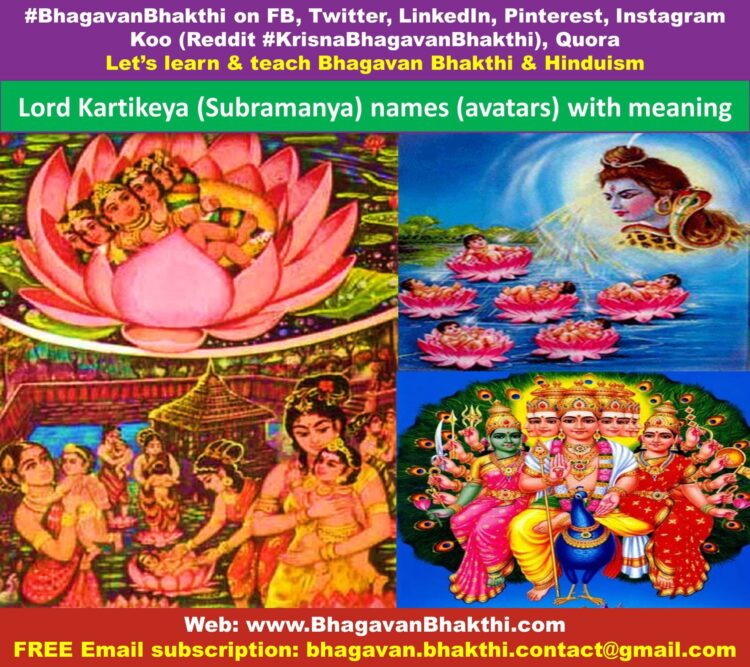 10. Saravanabhava : In has another name called as SarAvaNabHava. He is the one who has emerged out from a highly powerful and divine tejass (energy) of Lord Shiva that was initially held by Sri Agni Deva (The Fire God) and dropped into the holy Ganga (Ganges) river.

This was later pushed into a lake called Saravana and pushed to the reedy bushes on its banks. Saravana lake is believed to be the makeover of the divine mother Goddess Sri Parvati Devi. And since, he has emerged out on the laws of Saravana, he came to be known as SaraVanabHava. In Sanskrit Bhava means born.

11. Guha : He is also called as Guha as he is the one who dwells in caves. Many places in India we can find mountains and caves as the abode / temples of Lord Sri Subramanya. 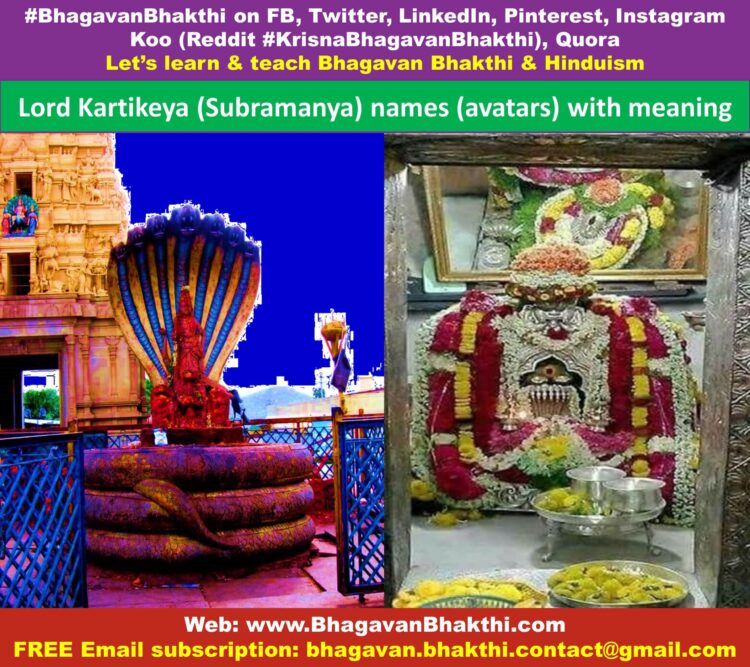 12 Skanda : Since He was born from the powerful and divine energy that got spilled / pushed, he is known as Skanda. In Sanskrit Skanda means spilling. He is Ayonija (In Sanskrit, Ayonija means, he is someone who is not born from the womb).

Also, in Sanskrit Skanda means an attacker, a warrior, one who destroys the enemies, etc.

13. Kunkuma Rakta Varnam : He is someone whose complexion is red in color like Kunkuma (vermilion).

15. Divya Mayura Vahanam : He is having a mount (vehicle) of a Mayura (Peacock).

17. SurasaiNya Natham (Naatham) : He is the one who is commander-in-chief of army of Devatas (Demigods). He is also known as Devasenapati.