Bhagavan Sri Rama was born as the eldest son of Dasharatha Maharaja. His mother name was Sri Kausalya Devi. 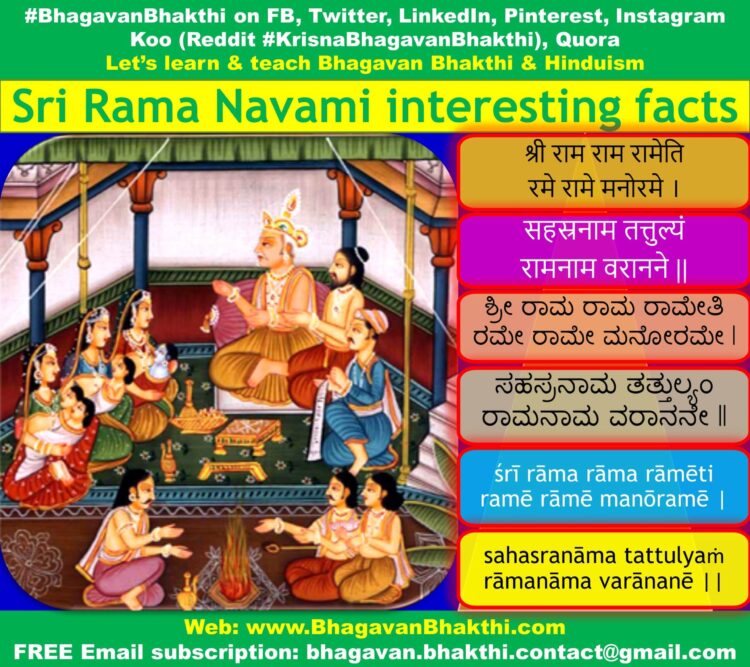 Now, let us move to our main subject:

1. During the Uttarayana period, in Vasanta Ritu, during Chaitra masam, in the Shukla paksha, on Navami tithi, Bhagavan Sri Rama was born and thus this day is known as Sri Rama Navami.

2. On this day itself Bhagavan Sri Rama was born as the eldest son to King Dasharatha and his prime queen Sri Kausalya Devi at Ayodhya on the banks of sacred river Sarayu.

3. It was in Ayodhya where Bhagavan Sri Rama was born and from where He ruled this world for more than 13,000 years is held in high esteem as one of the seven most sacred places known as Sapta Puri in the Indian Sub-continent.

3a. All these 13,000 years were known as ‘Rama Rajyam’, as during this period swayam (directly) Bhagavan Sri Rama was King and ruled.)

3c. The Sapta Puris (Seven Divine places) names are as given below: 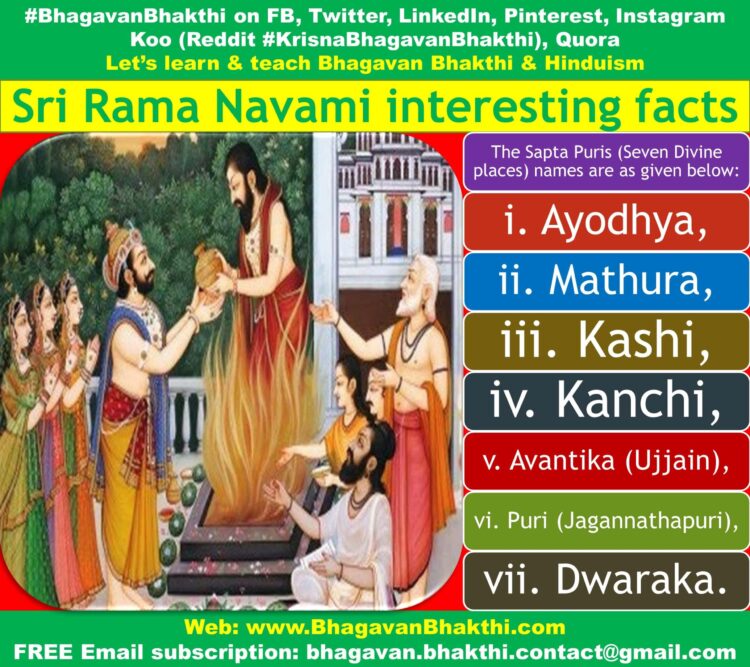 4. These seven places are said to be the most auspicious and Dharmic places attached with great divine and spiritual importance that leads one towards the auspicious moksha / divine liberation.

5. As said above, it was 7th avatar among the Dashavatars of Bhagavan Sri Vishnu that took place in the 24th Treta Yuga of the current Vaivasvata Manvantar. 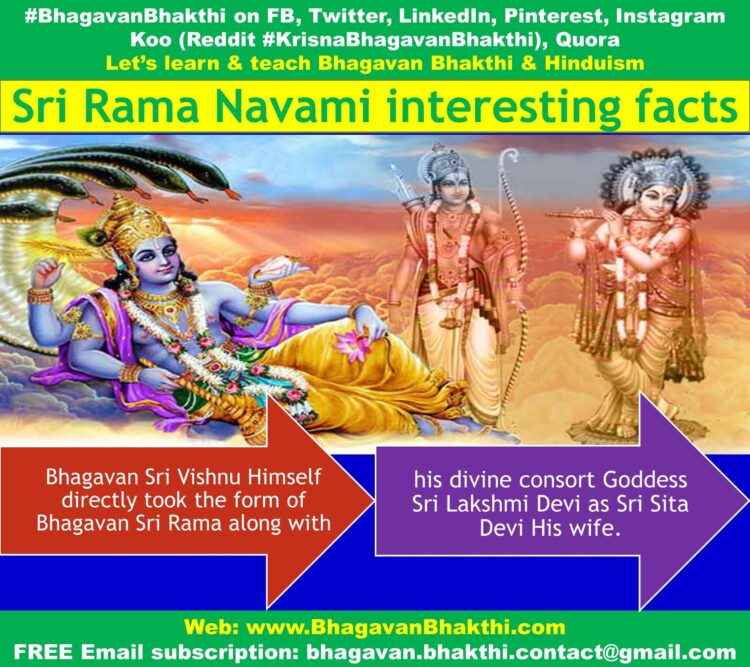 7. While, Lord Sri Aadi Sesha Naga (the divine seat on which Bhagavan Sri Vishnu reclines) was born as Lakshmana,

8. This day is celebrated as the auspicious birth day of Bhagavan Sri Rama not only in India,

but across the world in a grand manner with the nine day festival known as ‘Sri Rama Navaratri’ coming to an end with this day.

9. This most divine day is the the day Bhagavan Sri Rama married Goddess Sri Sita Devi.

10. Famous temple town of Bhadrachalam in Andhra Pradesh called Dakshina Ayodhya will be flooded with devotees to witness the famous ‘Sri Sita Rama Kalyanam’ that is held every year on this day of Sri Rama Navami.

10. It is Bhagavan Sri Rama’s coronation (Pattabhishekam) that took place on the day of Chaitra Shukla Navami. 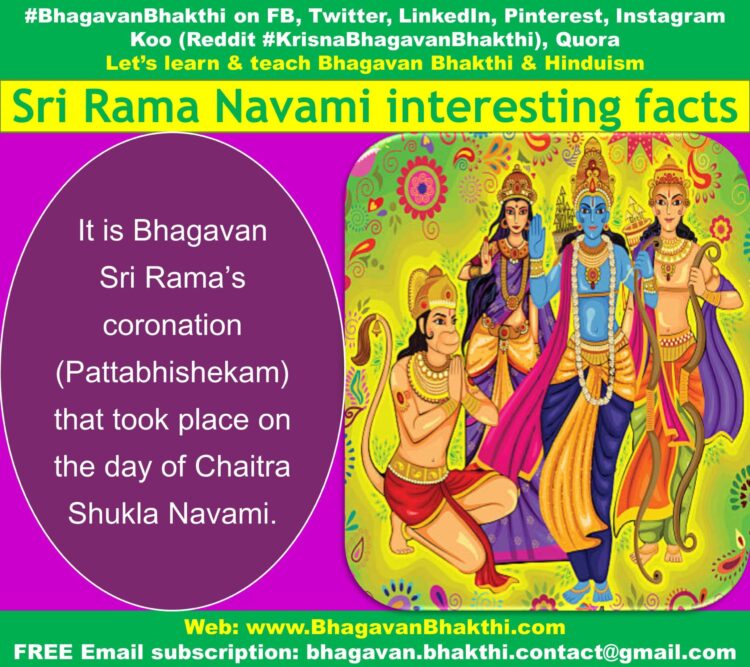 12. During ‘Pushkara Pattabhishekam’ period, three major events takes place as given below:

a. First is birth of Bhagavan Sri Rama,

b. Second is marriage of Bhagavan Sri Rama and Goddess Sri Sita Deva, and

c. Third is Pattabhishekam (Coronation) of Bhagavan Sri Rama is said to have taken place on this most auspicious day of Chaitra Shukla Navami in different periods.

13. For this reason, this day is given highest importance and significance and sanctity is also given for Sri Rama Navami utsavam / festival.

14. Even though the avatar of Bhagavan Sri Rama occurred more than 2 million years ago,

the impact of it has so deeply penetrated into the roots of Hinduism and Hindus, that even today Bhagavan Sri Rama is considered as a role model and an embodiment of all virtues.

15. Note about the Yugas in Hindu Sanatana Dharma: 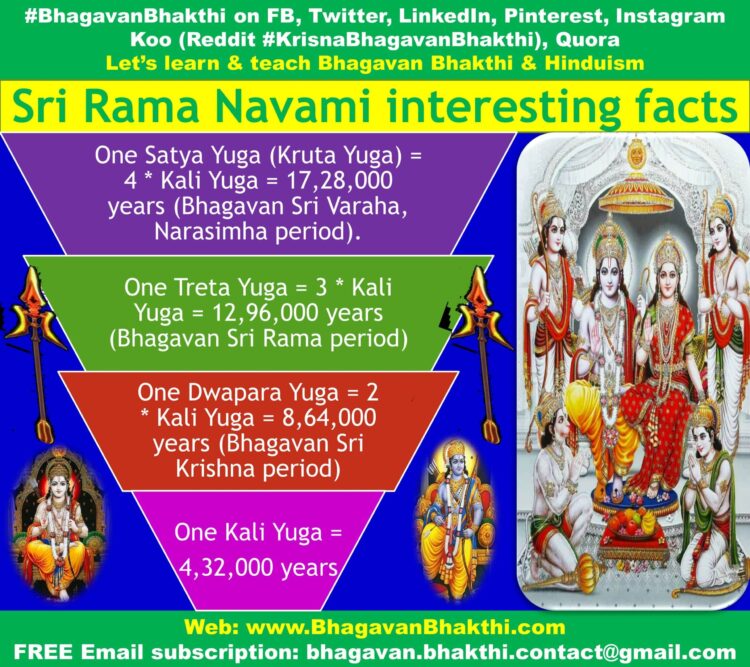 Thus, it should be noted that around 2 million (20 Lakhs) years have passed since the birth of Bhagavan Sri Rama.

Bhagavan Sri Rama was born in Suryavansh, in the lineage of the great and divine Kings like Ikshvaku, Raghu and Bhagiratha. 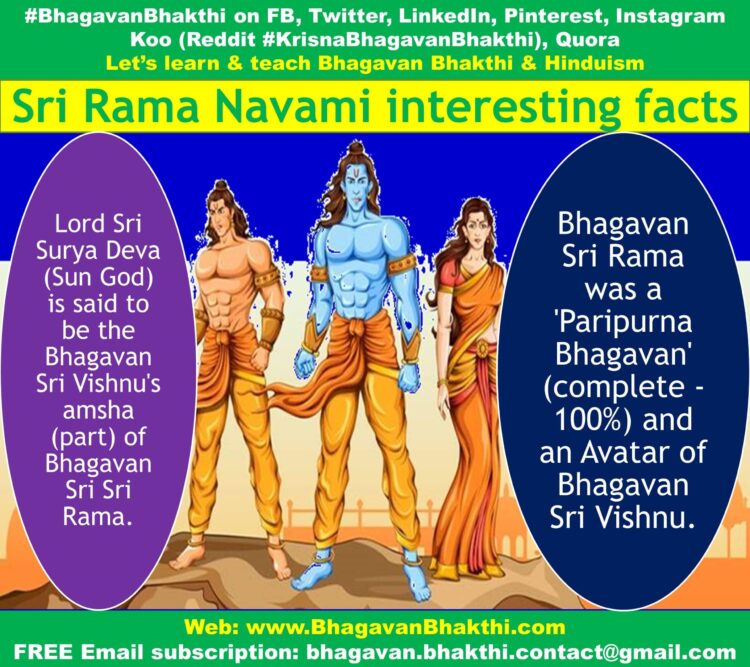 Goddess Sri Sita Devi is an avatar of Sri Maha Lakshmi Devi and she is the divine consort of Bhagavan Sri Rama.

In Valmiki Ramayana it is said that, Bhagavan Sri Rama ruled this earth for 13,000 years and those years were known as Rama Rajyam. 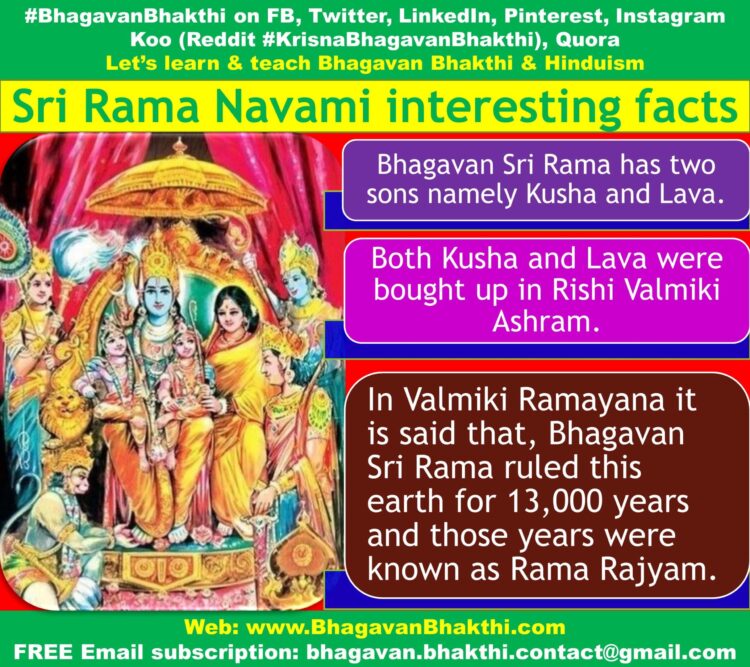 At the time of Bhagavan Sri Rama birth five planets, namely, Sun, Mars, Jupiter, Venus and Saturn were said to be in exalted position.

What is Sri Rama Navami? 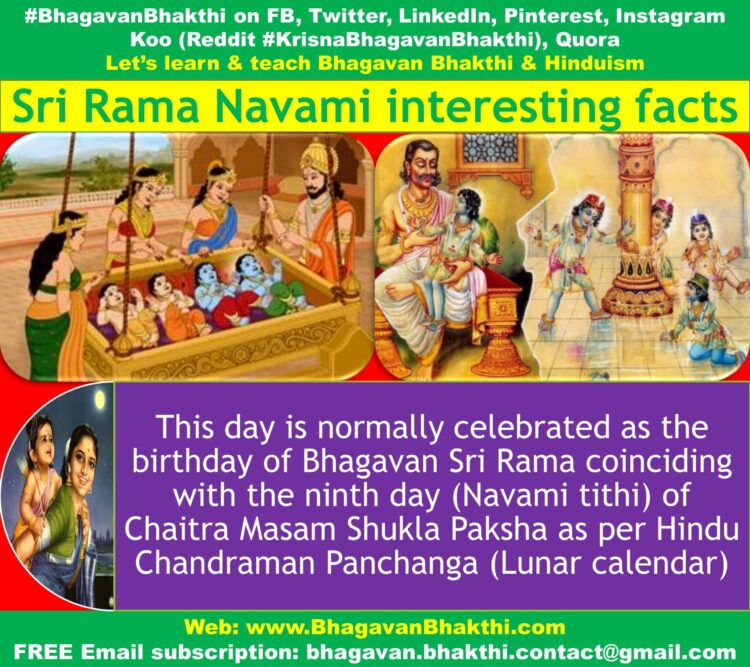 This festival is celebrated not only in India, but across the globe irrespective of caste and creed.

This day is normally celebrated as the birthday of Bhagavan Sri Rama coinciding with the ninth day (Navami tithi) of Chaitra Masam Shukla Paksha as per Hindu Chandraman Panchanga (Lunar calendar).

What is to be done on Sri Rama Navami day?

Bhagavan Sri Rama is worshiped on this most auspicious and divine day along with his consort Goddess Sri Sita Devi, and his brother Lakshmana and Lord Hanuman, and His parents, that is, father and King Dasaratha and mother and Queen Sri Kausalya Devi.

Arghya to be given to Bhagavan Sri Sri Rama with the following slokas: 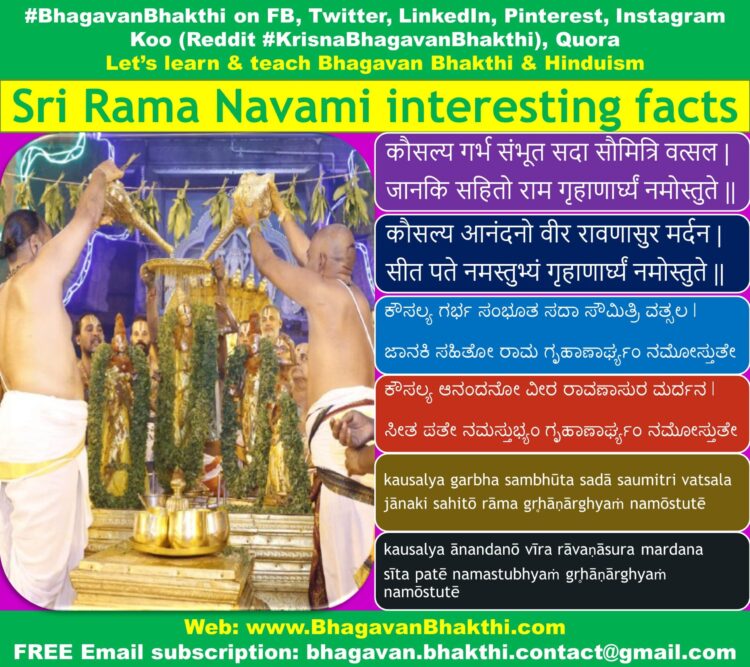 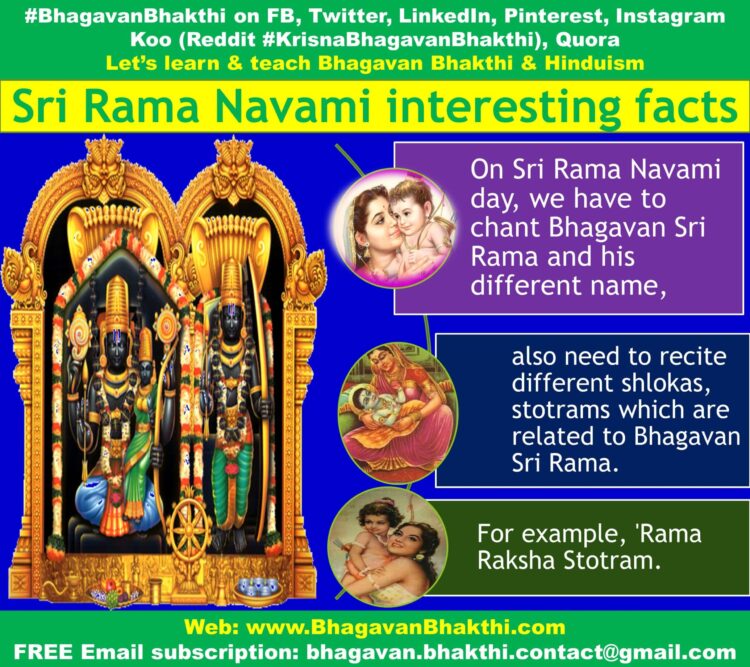 Unlimited number of people visit Bhagavan Sri Rama temples all over the world especially in the evening and offer prayers, bhajans etc.

One of such auspicious and divine place where ‘Sri Sita Rama Kalyanam’ is performed on a grand scale on this day, is at Bhadrachalam in Andhra Pradesh. This place is on the banks of holy river Godavari.

It is also an age old and divine tradition in some parts of the country, to offer a sweet drink which contains water mixed with jaggery,

The the divine festival of Sri Rama Navami is celebrated on a grand scale at places like: 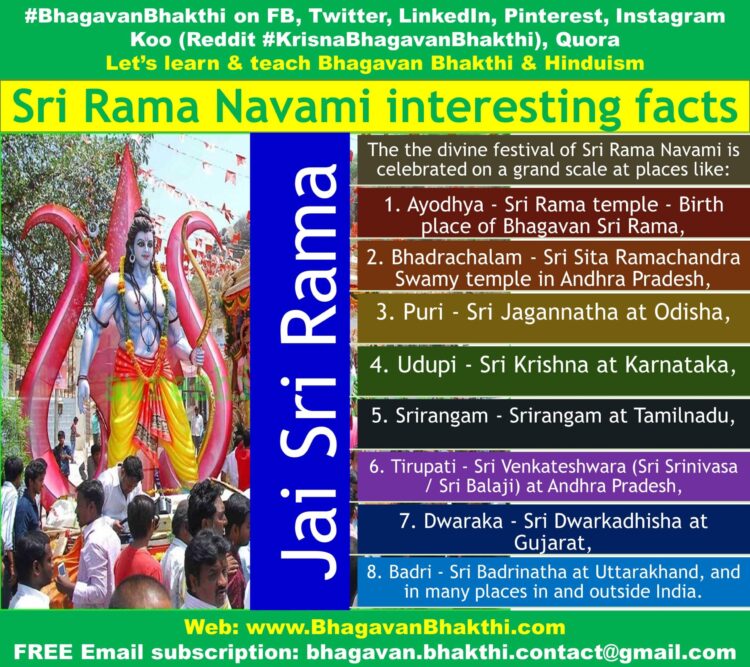 8. Badri – Sri Badrinatha at Uttarakhand, and in many places in and outside India.

Places connected to Bhagavan Sri Rama are as given below: 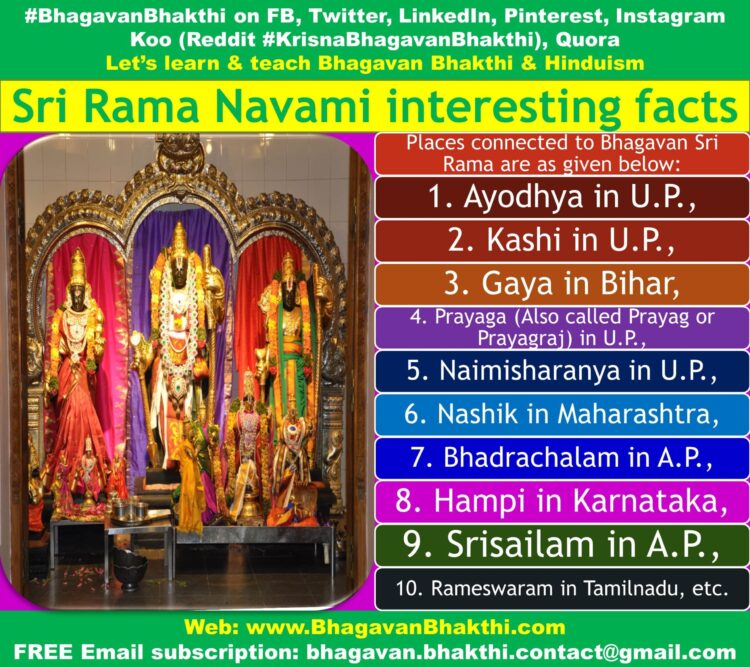 Few of the divine places in India which has direct connection with Bhagavan Sri Rama are:

To know more about Lord Rama and Ramayana, kindly click the below link: