It is said and believed that the lake here known as Pushkara Sarovaram (Lake) was the creation by directly Sri Brahma Deva.

Here, we can find one of the very few limited temples where Sri Brahma Deva been worshiped. 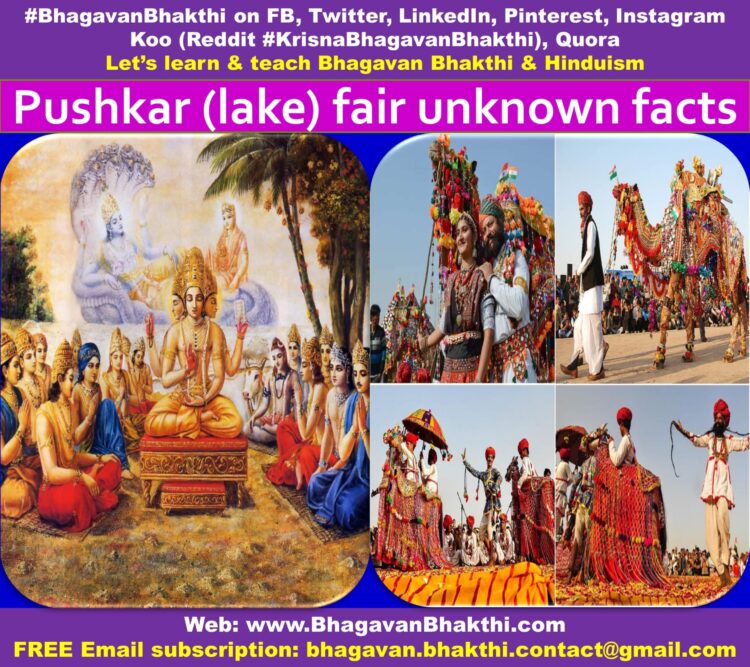 Pushkar shows the 12 years time factor in Vedic terms. Pushkara or Pushkar or Pushkaram is a festival of a particular river celebrated once in 12 years based on the movement of the planet Brihaspati / Guru / Jupiter in the zodiac house.

पुष्कर / ಪುಷ್ಕರ / puṣkara / Pushkara or Pushkar is a divine Sanskrit word derived from the element of Push (पुष्टि / ಪುಷ್ಟಿ / puṣṭi / Pushti) meaning nourishment and कर / ಕರ / kara / Kara means one who does it. Thus, Pushkar means, it is the energy that nourishes.

With reference to the sacred rivers, Pushkar means the one who energize the rivers and provide spiritual cleansing.

In the most divine Sri Vishnu Sahasranama Stotram shloka 5, we find a reference to the word ‘Pushkara’.

Here, Bhagavan Sri Vishnu is referred to as Pushkaraaksho (puṣkarākṣō): 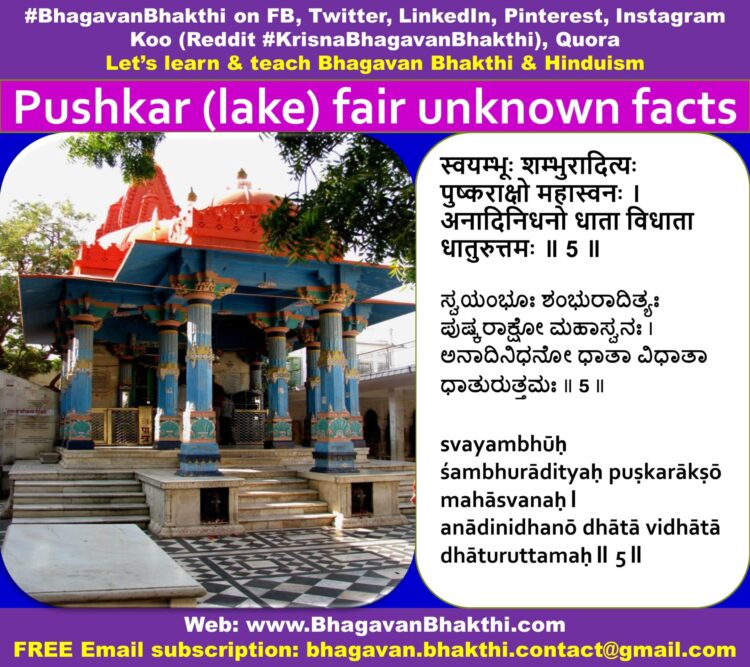 Meaning of puṣkarākṣō – Here puṣkarākṣō means, he is someone who has lotus eyes, the one who provides nourishment to the entire unlimited Universes and the one who is always present in holy Teerthas.

In Tirupati, the water tank near Bhagavan Sri Varaha Swamy temple is known as Swamy Pushkarini.

This means, it purifies and nourishes the quality of the planet placed within it.

In Astrology, especially for a vivaha muhurta (marriage’s divine timings), we can find preference being given for पुष्कर नवांश / ಪುಷ್ಕರ ನವಾಂಶ / puṣkara navānśa (Pushkara Navamsha) for a given Lagna (Marriage timings) that brings strength to the muhurta period chart.

Who is Pushkar or Pushkara as per Hindu scriptures? 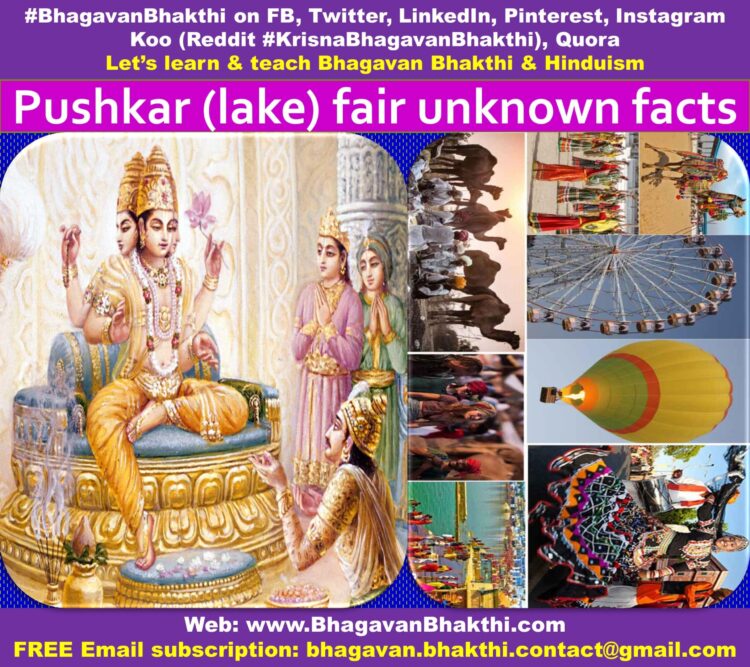 As per the Hindu scriptures, it is said that Pushkar is the son of Lord Varuna Deva.

Lord Varuna Deva is the ‘Abhimani Devata’ (Presiding Deity) of all the rivers.

As per the legend, it is said that, once Pushkar prayed to Lord Brahma Deva and asked Him for a boon to live in the sacred waters (emanated from the foot of Supreme Bhagavan Sri Maha Vishnu) of His Kamandal (A divine pot) with the intention of providing purity to all the Teerthas (Divine rivers).

Looking at the selfless desire expressed by Pushkar, Lord Brahma Deva immediately granted him the boon to live in the waters of His Kamandal.

By virtue of the boons acquired from Lord Brahma Deva and Lord Shiva, Pushkar became the King of all Teerthas and was regarded as the तीर्थ पालक / ತೀರ್ಥ ಪಾಲಕ / tīrtha pālaka (Teertha Paalak), that is, one who looks after all the divine rivers.

Looking at the perennial sacredness of Pushkar, the Lord of Devatas Sri Brihaspati wanted Lord Brahma Deva to bless Pushkar to be with him permanently.

Whereas, Pushkar was not ready at that time to go along with Sri Brihaspati.

Thus, Lord Brahma Deva resolved the situation by asking Pushkar to get connected with Brihaspati / Guru (Jupiter) for 12 days in the beginning and 12 days at the end of his sojourn in a particular rashi (Zodiac house), the transit of which generally happens once in a year.

With this, twelve holy rivers have been identified in which Pushkar enters each River once in 12 years coinciding with the movement of Jupiter in 12 zodiac signs.

Our Hindu Sanatana Dharma seers have prescribed certain austerities to be observed during Pushkar time known as Pushkar Vidhi.

Few of the most important Pushkar Vidhi during Pushkar time are: 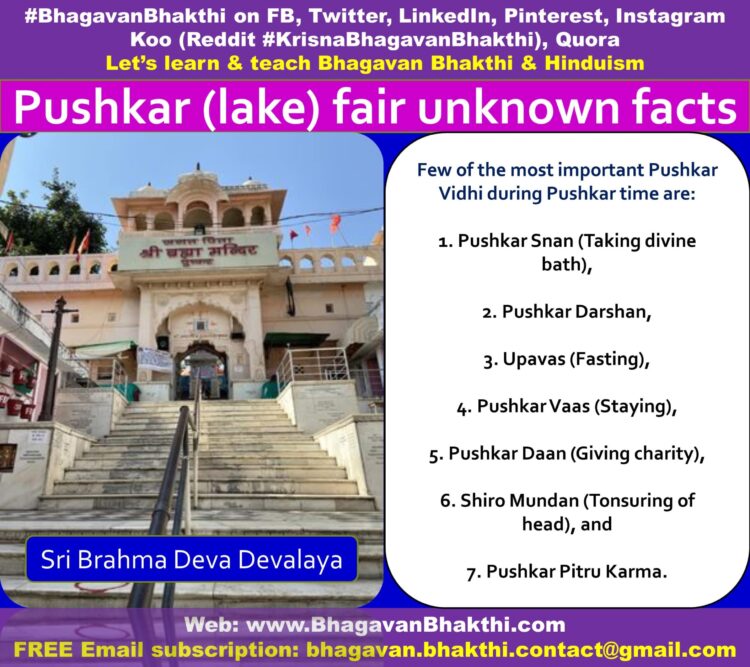 6. Shiro Mundan (Tonsuring of head), and

In Hindu Sanatana Dharma, lot of importance has been given for taking bath which is always a नित्य कर्म / ನಿತ್ಯ ಕರ್ಮಾ / nitya karmā / ‘Nitya karma’ and that too in a flowing river is considered as the foremost importance.

Taking bath in a holy river during पर्वकाल / ಪರ್ವಕಾಲ / parvakāla / Parvakal is much more pious and when it is the days of Pushkar the merits are manifold.

In Hindu Sanatana Dharma scripture, it is said that during Pushkar, all the Brahmaadi Devatas (Lord Brahma Deva and other Devatas / Demigods), Sages and Pitru Devatas will be residing in that Teertha (River) along with Brihaspati (Guru / Jupiter) and Pushkar.

During Pushkar, all the teerthas in the Universe will be entering into that particular river and will be flowing as अंतर्वाहिनि / ಅಂತರ್ವಾಹಿನಿ / antarvāhini / Antarvahini (River moving inside).

Doing snan (Divine bath) in a Pushkar river will help to cleanse the inner selves, wash out the evil propensity and open up a path for a Dharma (righteous) living.

This snan (Divine bath) should be taken early in the morning before Sunrise during Brahmi Muhurtam. This time is highly auspicious time.

After Pushkar Snan, one has to pray and give Arghya to the concerned Pushkar Teertha (River), Teertha Raja (Pushkar), Brihaspati / Guru / Jupiter, Bhagavan Sri Vishnu who is eternally present in all the Teerthas, Brahmadi Devatas (Brahma and other Devatas / Demigods), Vashishthadi Sages (Vashishtha and other Rishi / Sages), Gangadi nadis (Ganga and other rivers) and the Sri Surya Deva.

It has become a tradition since the unknown time to celebrate the movement of Brihaspati / Guru / Jupiter in a particular house in the zodiac house as the Pushkar festival of a particular river.

The schedule is as given below: 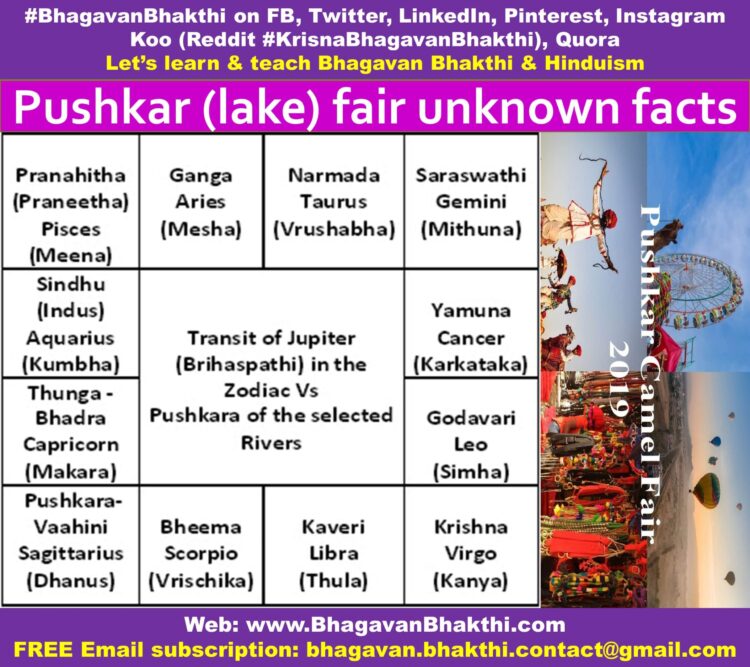 Pushkar schedule usually starts with Ganga River when Brihaspati / Guru / Jupiter enters into Mesha Rashi which is the first sign in the zodiac house.

Pitru Yagnas like performing Pitru श्राद्ध / ಶ್ರಾದ್ಧ / śrād’dha / Shraaddha, living tarpan have been prescribed to get discharged from Pitru Runa.

This has been in continuously performed since the unknown time and even अवतार पुरुष / ಅವತಾರ ಪುರುಷರು / avatāra puruṣa / Avatar Purushas like Bhagavan Sri Rama, Bhagavan Sri Parashurama have performed Pitru karma.

(We should always remember that Bhagavan Sri Rama or Bhagavan Sri Parashurama or any of Bhagavan Sri Vishnu’s avatar need not be performing any material rituals. But, Bhagavan shows us the path on how to perform, so that we common people should learn and perform the same in the correct way.)

We, the ordinary human beings are no exception to this dictum. 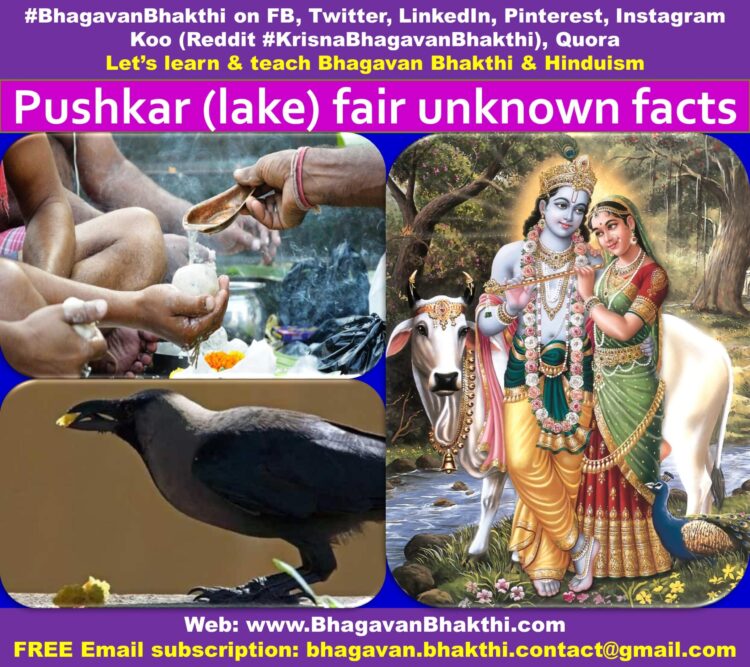 Performing Pitru Karma during Pushkar days also forms part of the Pitru Yagna which is considered as highly auspicious and worthwhile.

Only those who have lost their parents are eligible to perform the holy rituals to their ancestors.

This has to be performed preferably in the form of Anna Shraaddha with Pinda Pradhana and Brahmana Bhojana.

Hiranya Shraaddha is also in vogue where instead of rice, wheat flour is used for making Pindas and instead of Brahmana Bhojana they will be offered Dakshina.

Pushkar shraaddha can be performed on any day during the 12 day period of Pushkar, or on the 9th day or on the Pitru tithi day if it coincides except on the day of Ekadashi.

Our scriptures say that, Pitrus (Ancestors) will descend on Earth during Pushkar days and will reside on the banks of Pushkar River longing for their off-spring to perform Pitru Shraaddha.

Performing Pushkar shraaddha, one will be bestowed with blessings from ancestors, peace and prosperity to the family.

It will also work as cure for various mundane problems one is facing in life related to marriage, progeny, health, poverty etc.

To know about the Mahalaya Shraddha, visit the below link:

What is Mahalaya Shraddha (Pitru paksh)

At the time of Pushkar Snan, Shraaddha and Daan are considered to be highly pious and this gives eternal results.

This daan (charity) can be given to Brahmins in the form of Dasha Dana (10 in number) or Shodasha Daan (16 in number).

Some of the Pushkar charities are as given below: 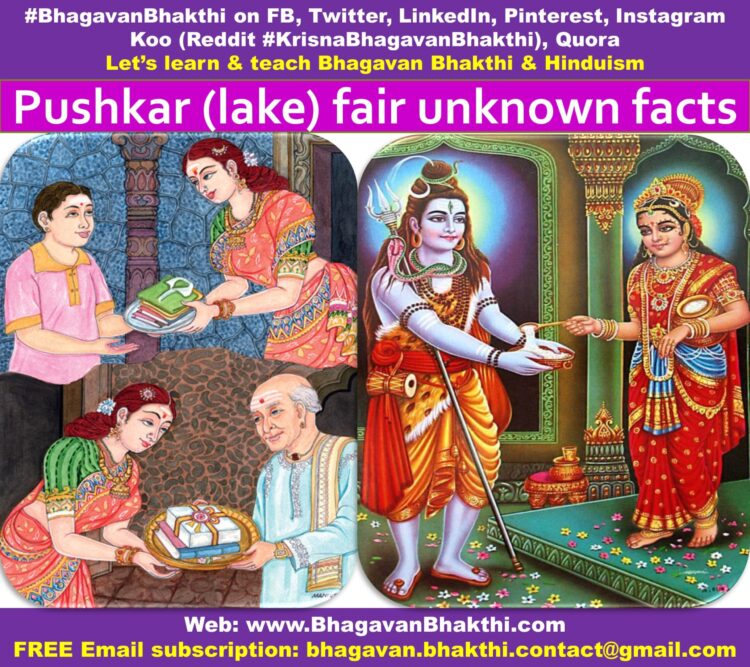 The divine Pushkar is a very big river based festival in India. Lakhs of people including foreign tourists participate in this huge gatherings.

Since unknown time, Hindus consider rivers as pious, divine and river worship in the form of Pushkar is performed to make the mankind realize the significance of water the life sustaining force.

It is our wholehearted duty to respect and follow the rituals, ceremonies, traditions and culture pioneered by our ancestors with a great foresight and Pushkar is one such pious Hindu sampradaya (tradition) that has descended from our divine Rishis (Sages) which is highly auspicious and meritorious in all the ways.

In the Astrological way, Brihaspati / Guru / Jupiter is the most benevolent planet symbolizing the learning, progeny, knowledge, wealth, auspiciousness, fortune, divinity, domestic peace and above all the कारक / ಕಾರಕ / kāraka / karaka (Doer) for occurrence of Pushkaram.

Pushkar, the Teertha Raja (King of all the rivers) always resides in the Kamandala (Divine pot) of Lord Sri Brahma Deva in the sanctified waters that has emerged out from the foot of Bhagavan Sri Vishnu.

Entry of Pushkar into a particular river signifies the Pushkar festival. This happens when all the Brahmadi Devatas (Brahma and other Devatas / Demigods), all the Sages, all the Pitru Devatas, all the Theertas in this Bhoomandalam (Earth) including the most pious Ganga enters into that particular river along with Brihaspati and Pushkar.

This time of their entry into a particular river is considered as highly holy and this has the power to diminish the terrible and horrible sins committed.

This is considered as the most holy time to perform ceremonies of ancestors on the banks of Pushkar River that will help them to attain divine liberation.

To know more about the pilgrimage places of India, click the below link:

To know more about Bhagavan Sri Srinivasa / Venkatesha / Balaji, click the below link: