Why should we know about God (Lord Vishnu)

But, we should always remember that, why a question is raised, then answer for that question will be also available for the person who really wants to know the correct answer(s) as per Hindu Sanatana Dharma texts.

Hindu God Bhagavan Sri Vishnu is present since the ‘aadi kalam’ and will be present until the ‘ananta kalam’.

Lord Vishnu is known as ‘guna paripurna’, that is, he is having all the infinite qualities and no other Devatas (Demigods) is having such all the qualities. 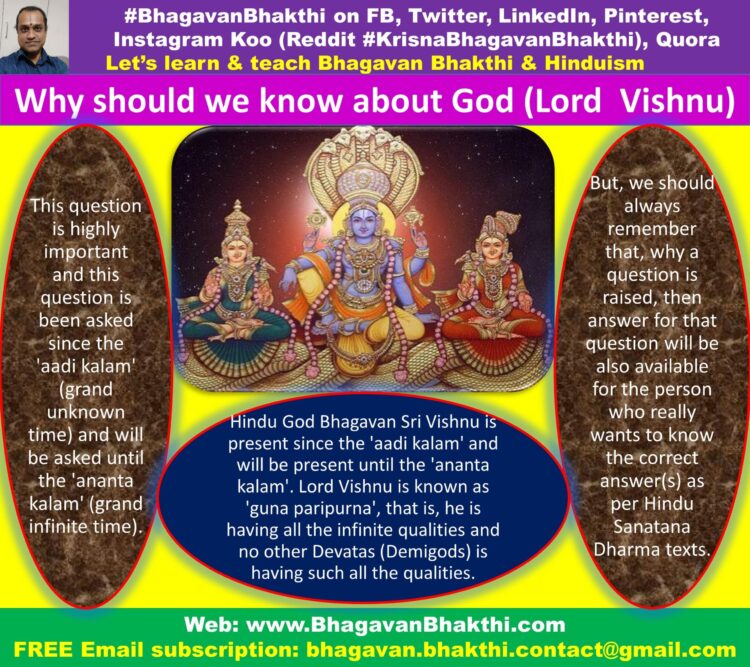 Thus, Hindu Sanatana Dharma always says to know the corrects as per the Hindu scriptures and not the answer(s) given by a particular person(s) from his / her own logical mind.

Now let us know the below: 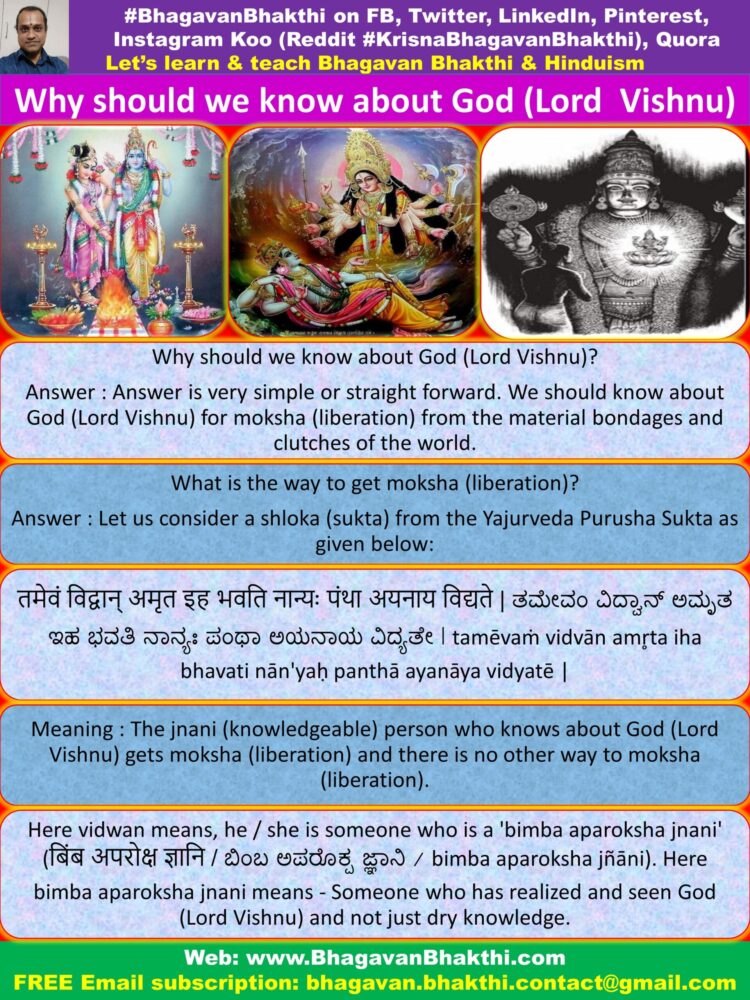 Why should we know about God (Lord Vishnu)?

Answer : Answer is very simple or straight forward. We should know about God (Lord Vishnu) for moksha (liberation) from the material bondages and clutches of the world.

What is the way to get moksha (liberation)?

Answer : Let us consider a shloka (sukta) from the Yajurveda Purusha Sukta as given below:

Here bimba aparoksha jnani means – Someone who has realized and seen God (Lord Vishnu) and not just dry knowledge. 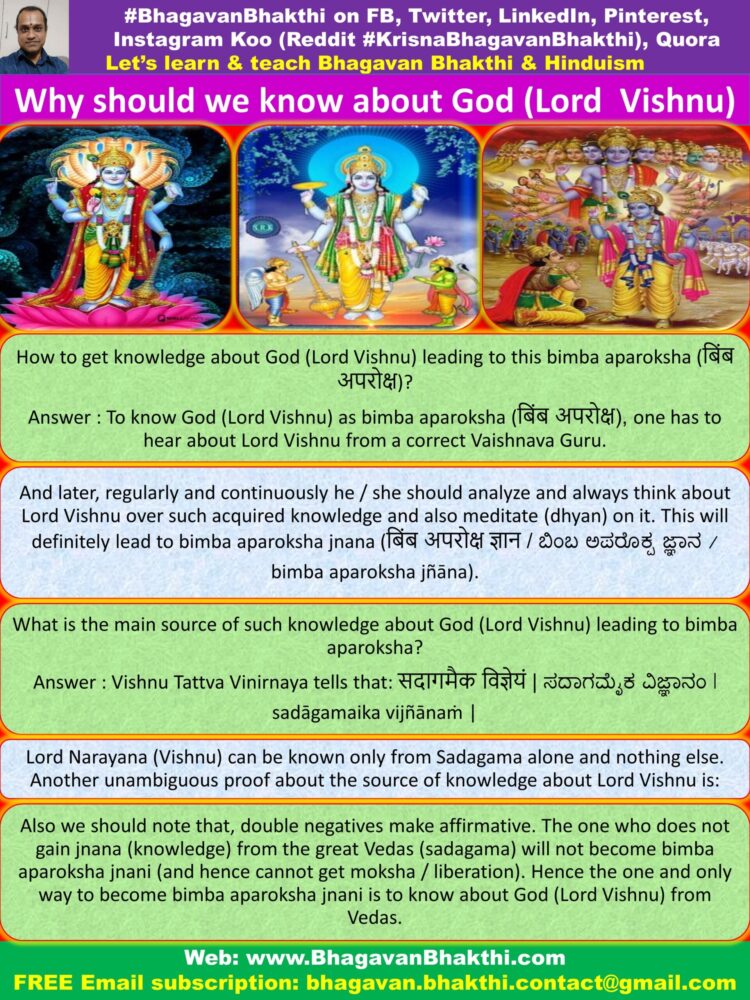 How to get knowledge about God (Lord Vishnu) leading to this bimba aparoksha (बिंब अपरोक्ष)?

Answer : To know God (Lord Vishnu) as bimba aparoksha (बिंब अपरोक्ष), one has to hear about Lord Vishnu from a correct Vaishnava Guru.

And later, regularly and continuously he / she should analyze and always think about Lord Vishnu over such acquired knowledge and also meditate (dhyan) on it. This will definitely lead to bimba aparoksha jnana (बिंब अपरोक्ष ज्ञान / ಬಿಂಬ ಅಪರೊಕ್ಪ ಜ್ಞಾನ / bimba aparoksha jñāna).

What is the main source of such knowledge about God (Lord Vishnu) leading to bimba aparoksha?

Lord Narayana (Vishnu) can be known only from Sadagama alone and nothing else.

Another unambiguous proof about the source of knowledge about Lord Vishnu is:

Also we should note that, double negatives make affirmative. The one who does not gain jnana (knowledge) from the great Vedas (sadagama) will not become bimba aparoksha jnani (and hence cannot get moksha / liberation).

Hence the one and only way to become bimba aparoksha jnani is to know about God (Lord Vishnu) from Vedas. 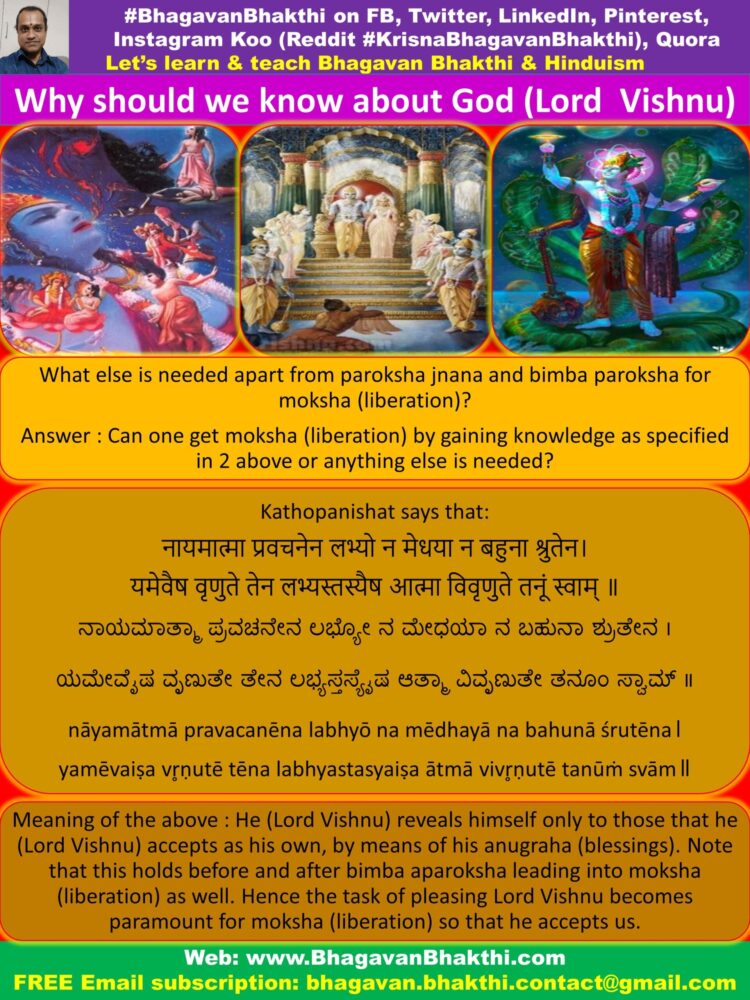 What else is needed apart from paroksha jnana and bimba paroksha for moksha (liberation)?

Answer : Can one get moksha (liberation) by gaining knowledge as specified in 2 above or anything else is needed?

Meaning of the above : He (Lord Vishnu) reveals himself only to those that he (Lord Vishnu) accepts as his own, by means of his anugraha (blessings).

Above is confirmed by another shruti vakya as given below:

(This is taken from Narayana Shruti quoted in Vishnu Tattva Vinirnaya)

Meaning of above shloka : Lord’s (Lord Vishnu’s) anugraha (blessingss) is the only solution for moksha (liberation). 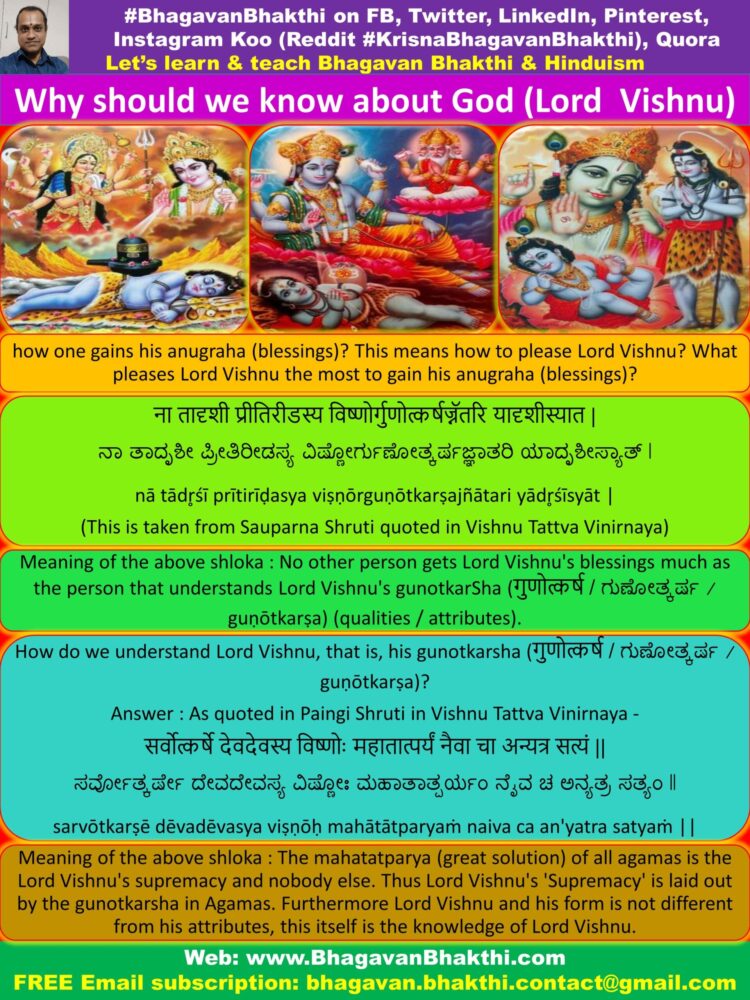 Next, the question becomes how one gains his anugraha (blessings)?

This means how to please Lord Vishnu?

What pleases Lord Vishnu the most to gain his anugraha (blessings)?

(This is taken from Sauparna Shruti quoted in Vishnu Tattva Vinirnaya)

Meaning of the above shloka : No other person gets Lord Vishnu’s blessings much as the person that understands Lord Vishnu’s gunotkarSha (गुणोत्कर्ष / ಗುಣೋತ್ಕರ್ಷ / guṇōtkarṣa) (qualities / attributes).

Answer : As quoted in Paingi Shruti in Vishnu Tattva Vinirnaya –

Meaning of the above shloka : The mahatatparya (great solution) of all agamas is the Lord Vishnu’s supremacy and nobody else.

Thus Lord Vishnu’s ‘Supremacy’ is laid out by the gunotkarsha in Agamas. Furthermore Lord Vishnu and his form is not different from his attributes, this itself is the knowledge of Lord Vishnu. 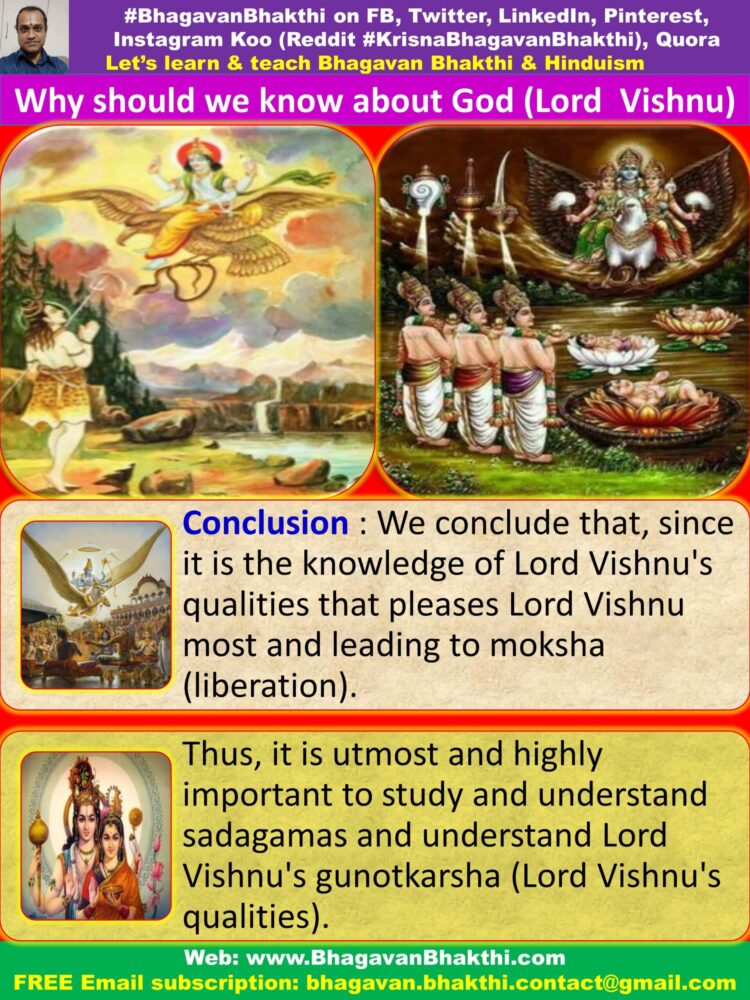 Conclusion : We conclude that, since it is the knowledge of Lord Vishnu’s qualities that pleases Lord Vishnu most and leading to moksha (liberation).