Footprints of Hindu Gods (Footprints around the world)

From north to south, from west to east, we can find many footprints of Hindu Gods all over India. 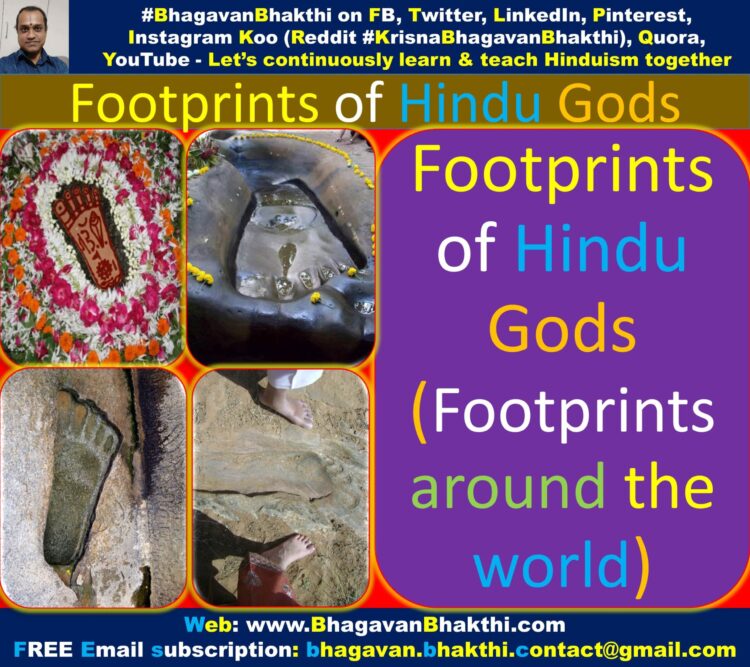 List of Hindu Gods footprints are as given below:

Other footprints around the world

The temple is located in Gaya, Bihar, India on the bank of the river Phalgu, marked by a footprint of Lord Vishnu known as Dharmasila.

Atop the structure there is a 50 kg flag, donated by a devotee called as “Gayapal Panda Bal Govind Sen”.

The Vishnupada (Vishnupada) temple is the center for all the Shraddha (श्राद्ध / ಶ್ರಾದ್ಧ / śrād’dha) rites in Gaya and also for all the people of India.

The legendary saints like Sri Madhvacharya Ji, Sri Chaitanya Mahaprabhu Ji, Sri Vallabhacharya Ji and others have visited this shrine. 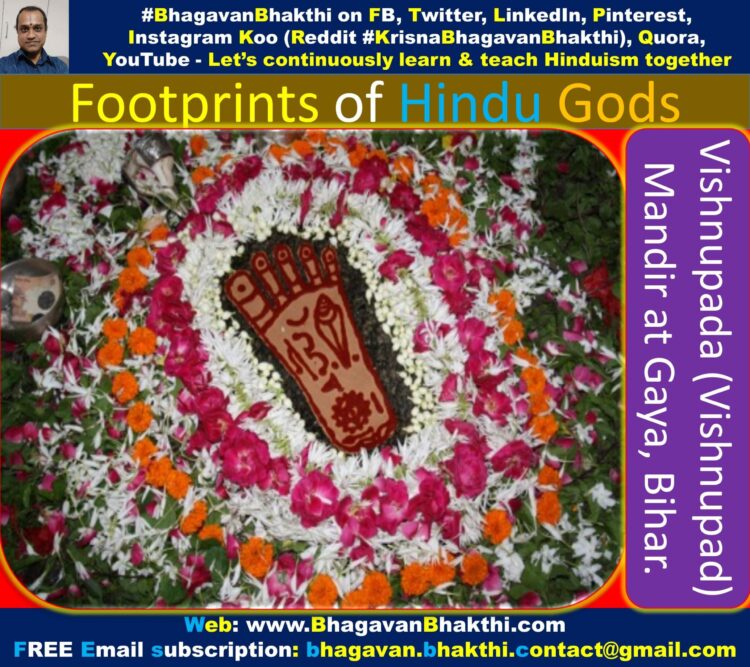 This temple is dedicated to Lord Rama and it is located at Rambhadra near Helabazar, Hajipur in Bihar.

As per local legend, it is said to have been in existence since Ramayana period and Lord Sri Rama is believed to have visited this place on his way to Janakpur, where his footprints are worshiped.

The Ramchaura Mandir has tradition of celebrating Rama Navami, the birth anniversary of Rama, every year. A small fair is also organized on the eve of Rama Navami every year. 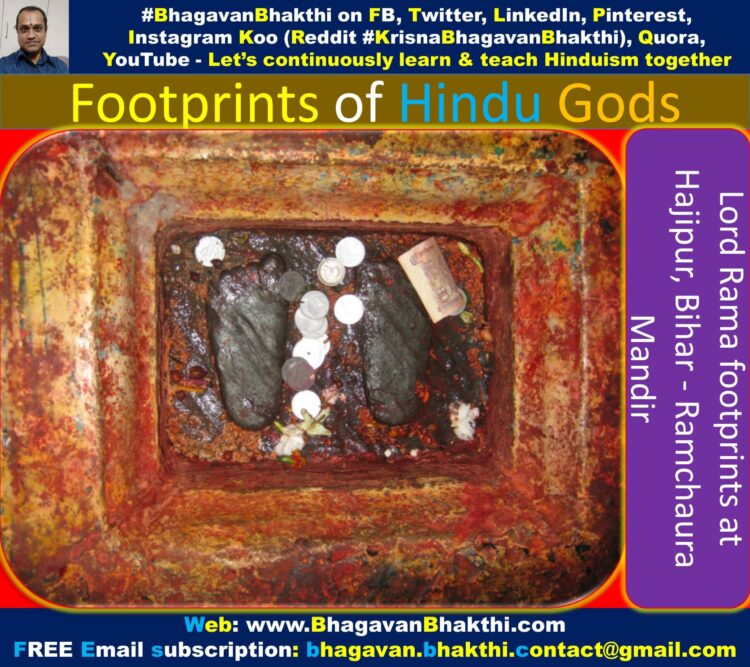 Lord Rama and Sita Devi footprints at Chitrakoot, Madhya Pradesh : Near a place called as Sphatik Shila there is a large boulder in the place that contains the footprints of Lord Rama and Goddess Sita Devi.

According to the local priests, this place is blessed by Lord Rama and Goddess Sita Devi.

This is because both Lord Rama and Goddess Sita Devi used to sit on this large boulder.

This is the place where the renowned poet Sri Goswami Tulsidas wrote Ramcharitmanas, a poem in Awadhi depicting the life of Lord Rama. 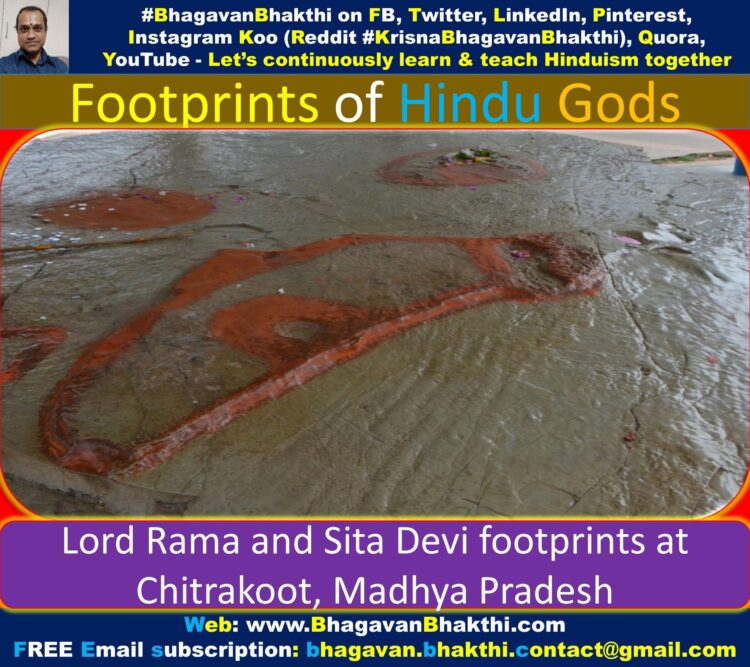 Lord Rama footprints at Shabari cave, Hampi, Karnataka : This is the same place where Shabari was waiting for Lord Rama. 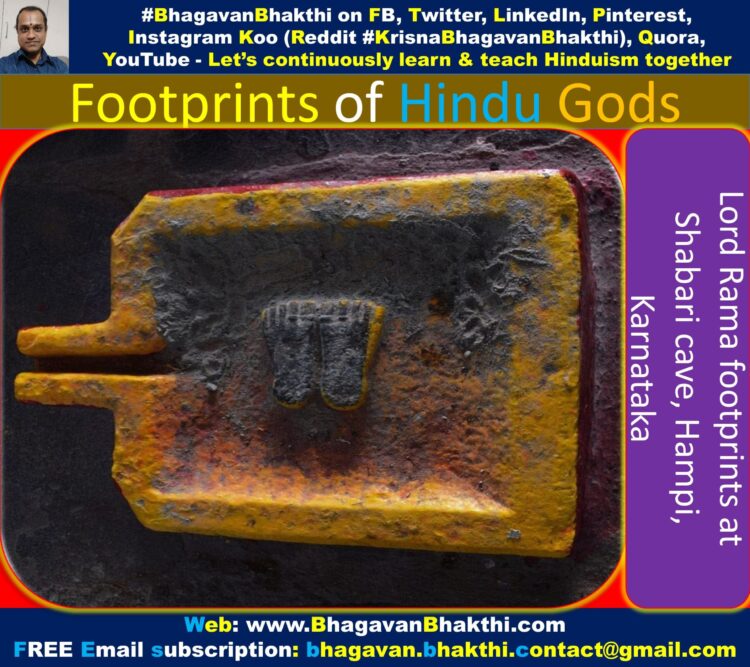 Lord Rama footprints at Anegundi, Chintamani, Karnataka : This is the very place from where Lord Rama shot arrow at Vali. 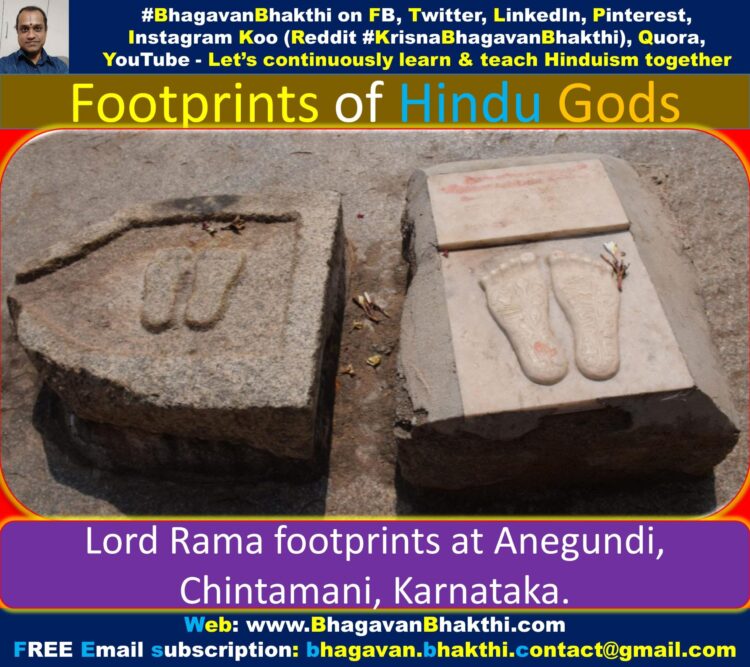 Lord Rama footprints at Kodiakkarai (Point Calimere or Cape Calimere), Tamil Nadu : Locally it is known as Ramar Padam (Rama’s footprint) located on the highest point of land in the sanctuary, is a small shrine containing the stone footprints of Lord Rama.

Local legend says that, when Lord Rama came in search of Goddess Sita Devi and reached this place, he first came to this spot near Kodiakkarai.

Before crossing the sea, Lord Rama climbed atop the highest sand dune in the jungles in this area and reconnoitered Ravana’s kingdom in Sri Lanka, which lies 48 km from this place.

From here Lord Rama was able to see the backside courtyard of Ravana’s palace in Sri Lanka (Then Lanka).

Thus Lord Rama decided that it was not fair for a true warrior to enter the enemy’s place from the backside and for this reason he went to Rameshwaram.

This spot where Lord Rama stood to take a look at Ravana’s Lanka is known as Ramar Padam (It’s a local name – This means Lord Rama’s footprint). 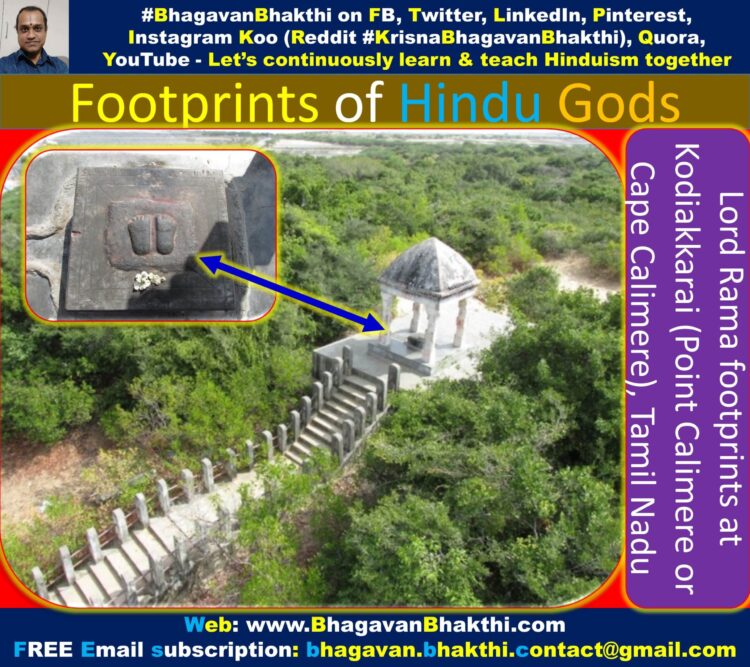 This place is also known as Rama Theertham, this shrine has the marks of Lord Rama footprints on a chakra when he has gone there to search for Goddess Sita Devi who was abducted by demon Ravana.

Located on a hillock, at a distance of 3 km from Sri Ramanathaswamy Temple (Rameshwaram), it is visited by thousands of devotees who come here to seek blessings of the Lord Rama.

This temple, dedicated to Lord Rama, is located on the top of the hills called Gandamadana Parvatham in Rameshwaram in Tamil Nadu. Inside the temple, footprints of Lord Rama have been kept on a Chakra. 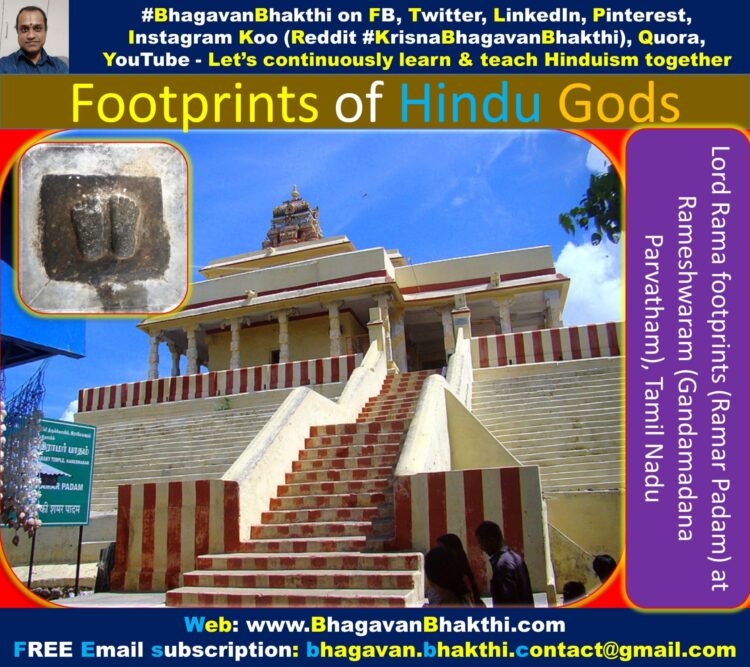 In Thailand there is a book called called “Ramakien”. This means “Glory of Lord Rama”. Ramakien is a Thai version of the ancient epic Ramayana.

The ancient capital of Thailand used to be named “Ayutthaya”, which is named after Lord Rama’s capital of Ayodhya in India. 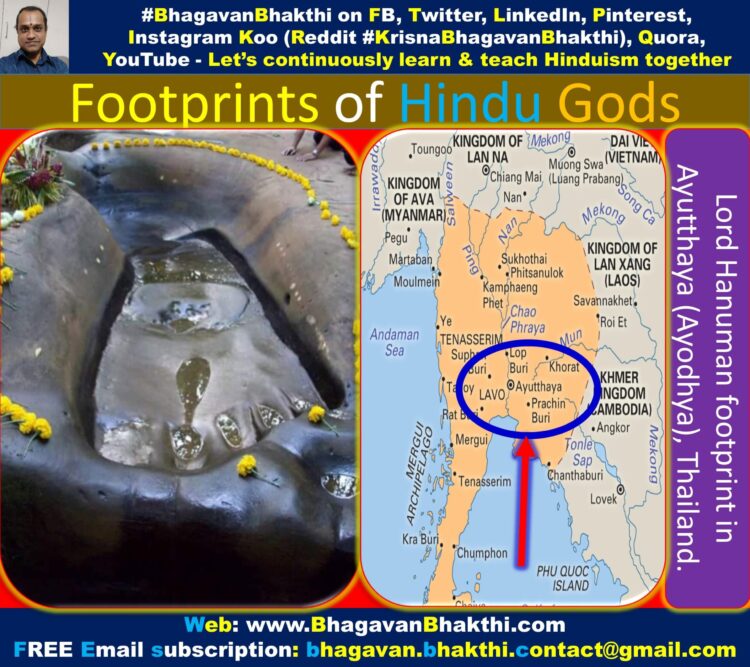 When Ravana kidnapped Goddess Sita Devi and heading towards Lanka a bird named Jatayu had fought battled with Ravana.

Jatayu could not fight for long time and fell at this place. According to the Valmiki Ramayana, Lord Rama accompanied by Lakshmana met the dying bird Jatayu at this spot.

Both Lord Rama and Lakshmana helped Jatayu the bird to attain moksha by uttering the words “Le Pakshi”.

In Telugu language “Le Pakshi” means “get up bird”. Hence the name of the place is called as Lepakshi. 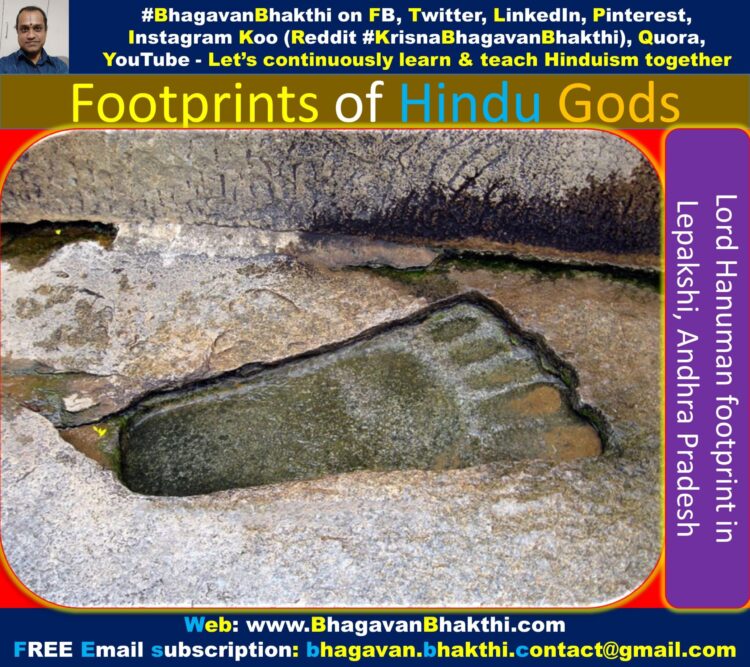 When Lord Hanuman leapt from India (Rameshwaram) to Lanka (Now Sri Lanka), he landed at this very spot and the force was so great that his footprint was left pressed into the solid stone as seen in this below image. 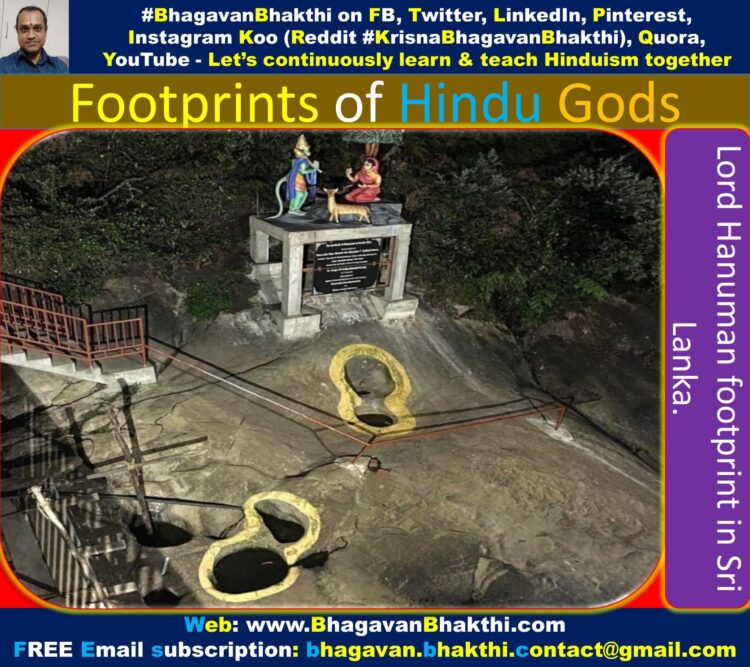 The local Indians in this place believe that the footprint belongs to Lord Hanuman.

While leaping over the ocean in search of herbal cure for Lakshmana, Hanuman had left an indelible mark on a solid rock.

Visitors throw coins on the footprint of Lord Hanuman for good luck. 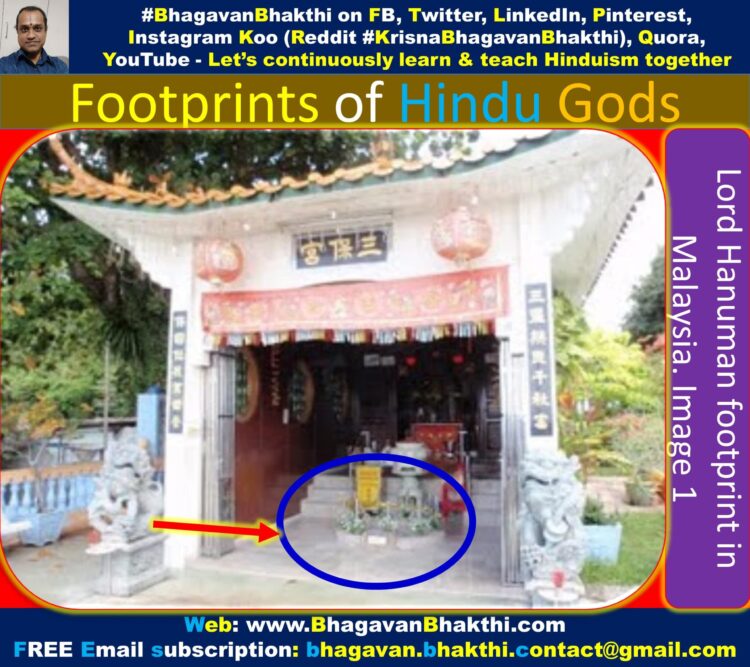 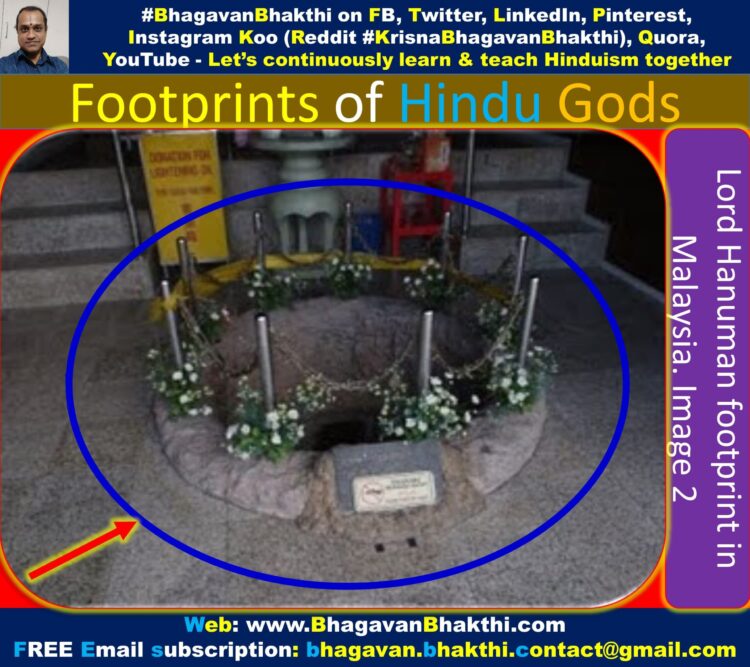 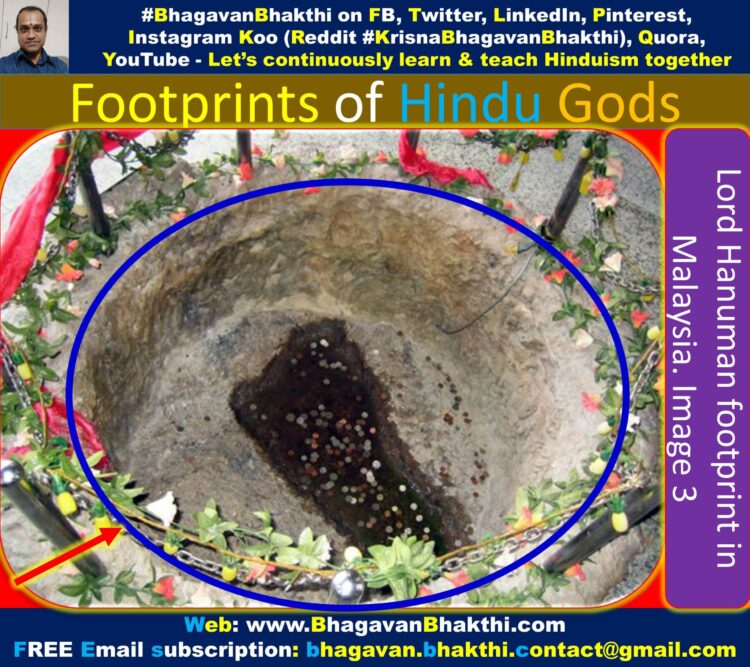 Also locals say that, all the Pandavas used to play dice game in this very place along with the Draupadi Devi. 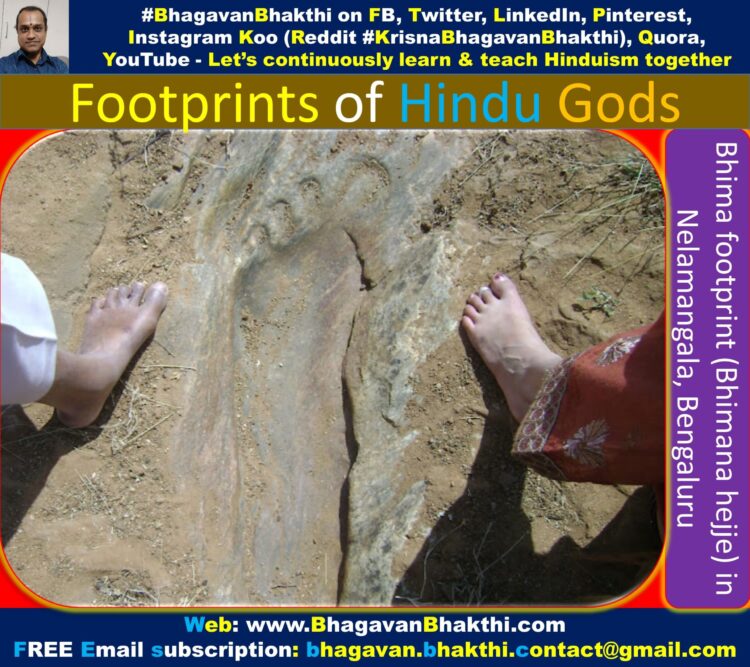 Other footprints around the world : 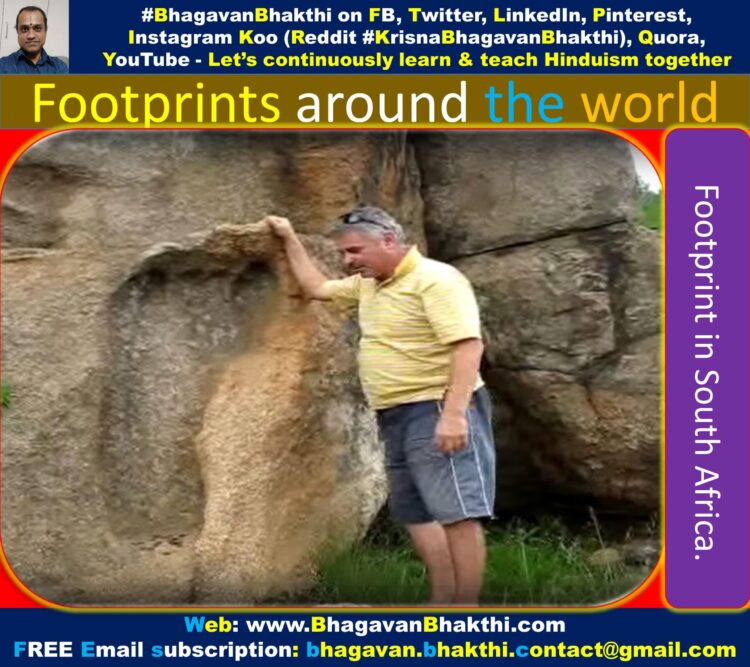 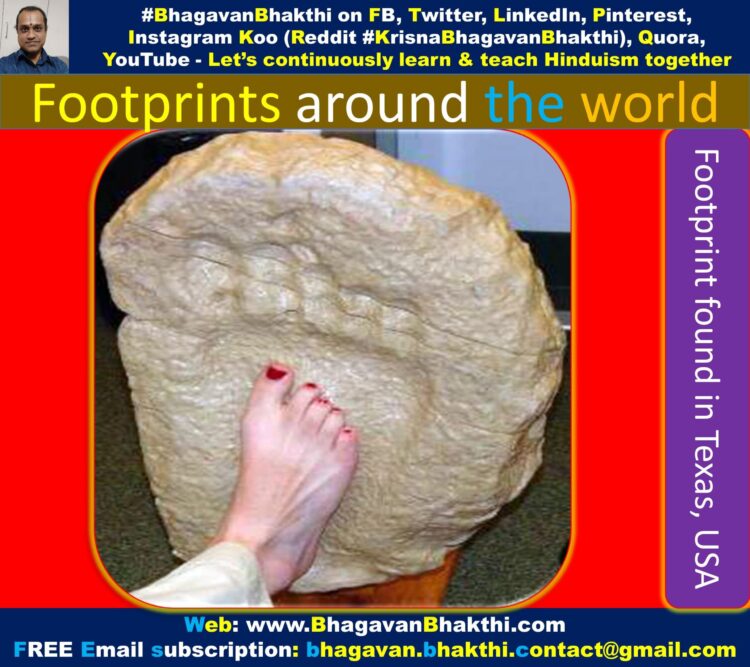 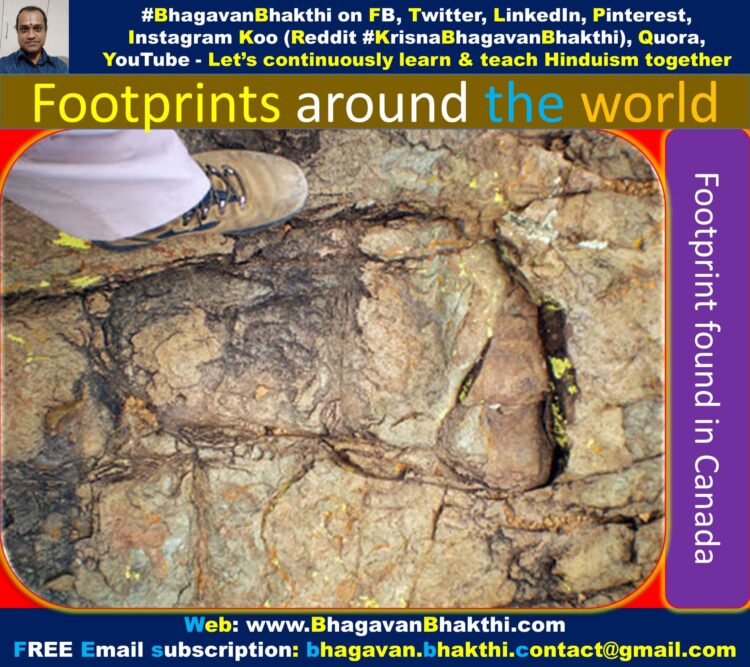 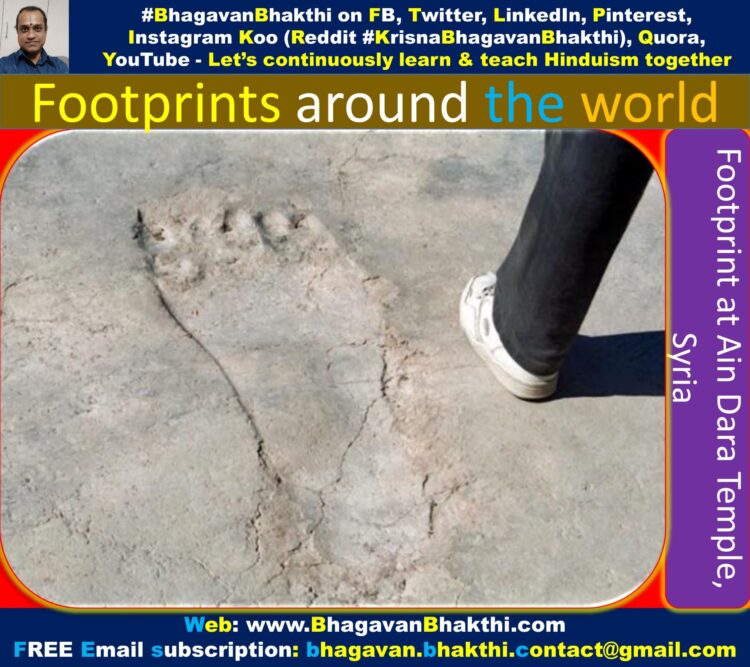 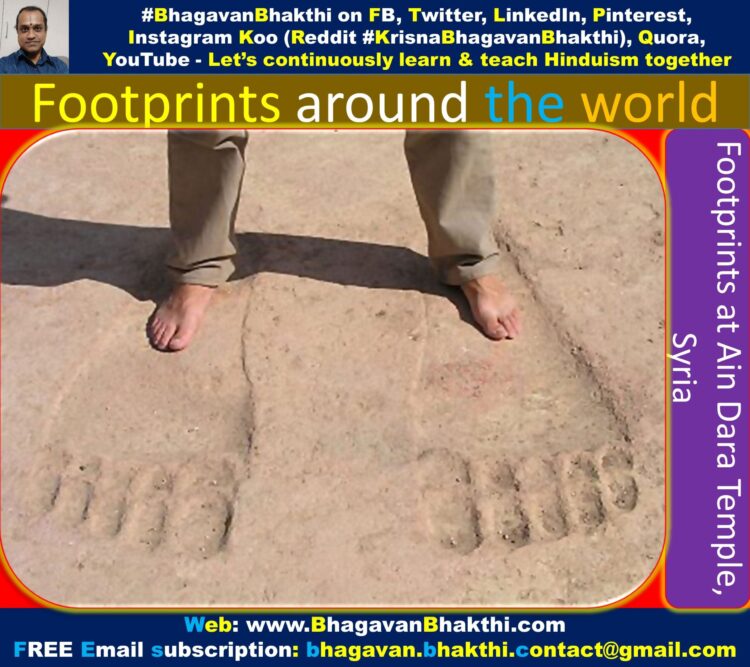 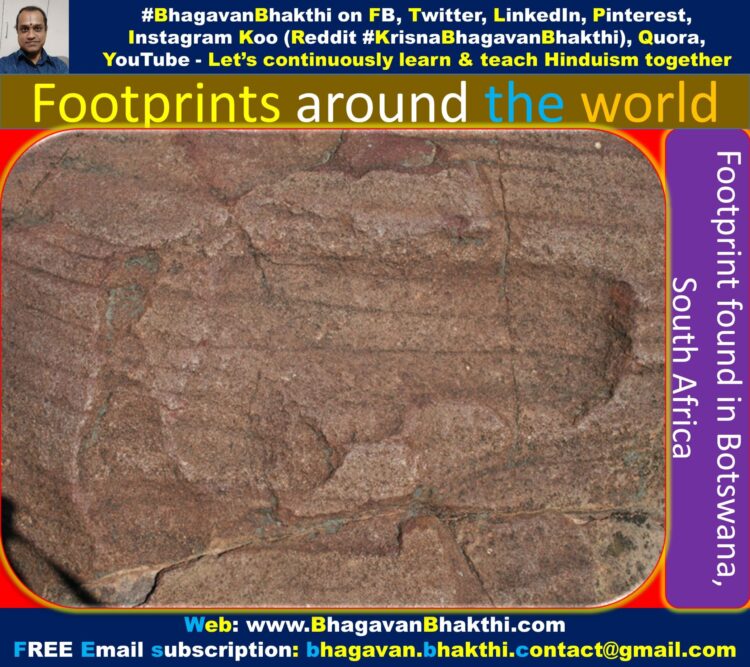 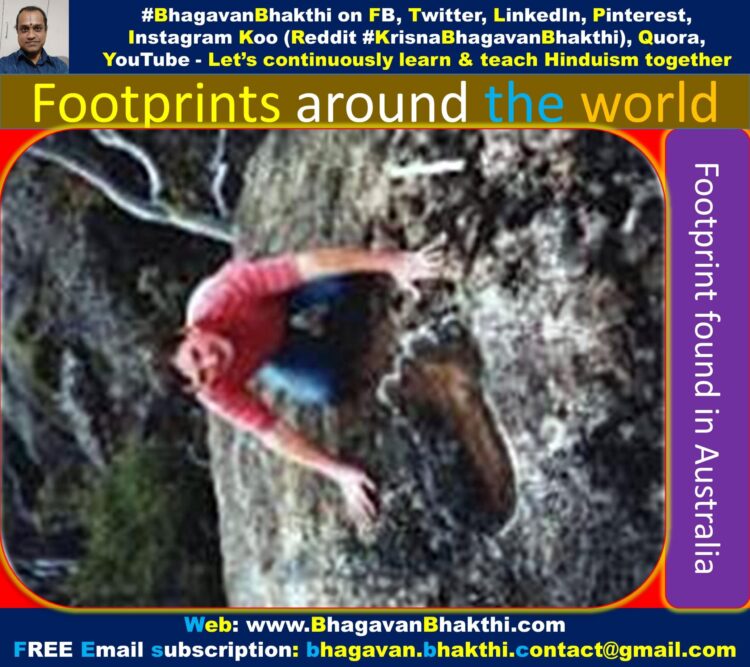 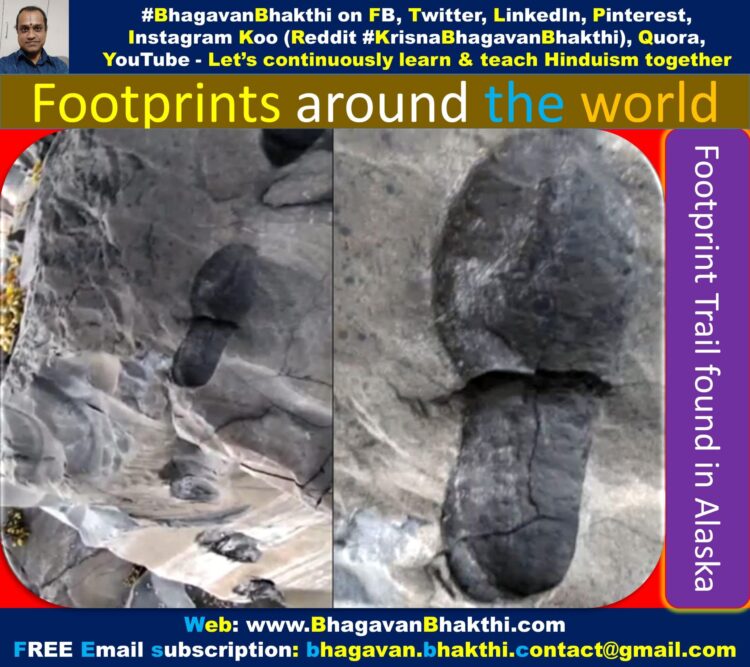 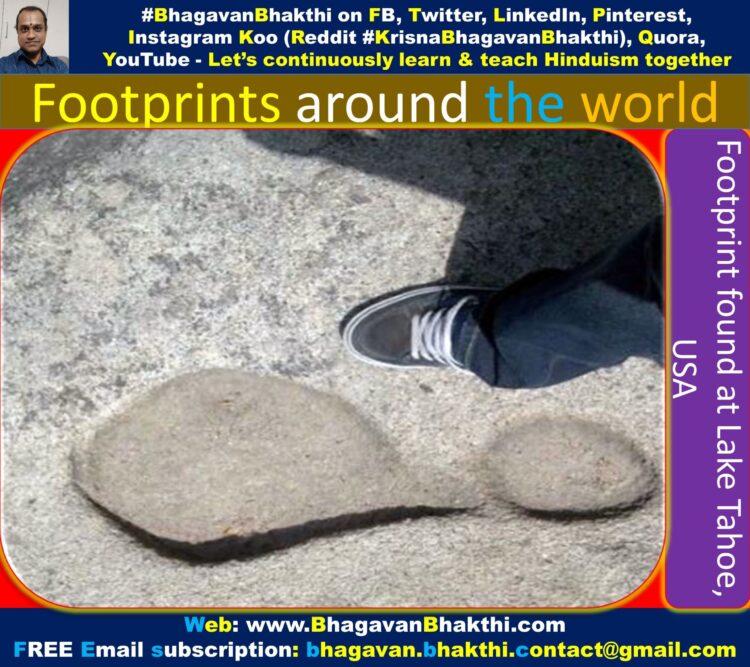 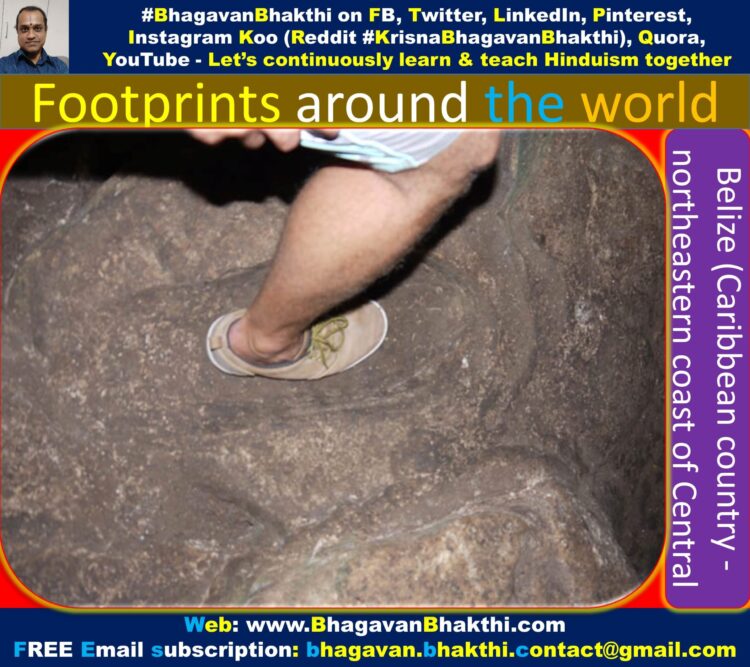 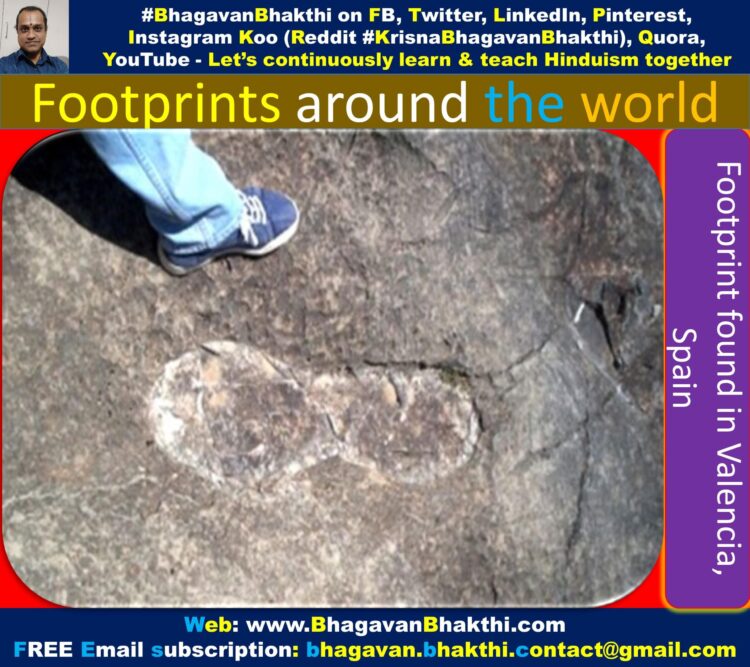 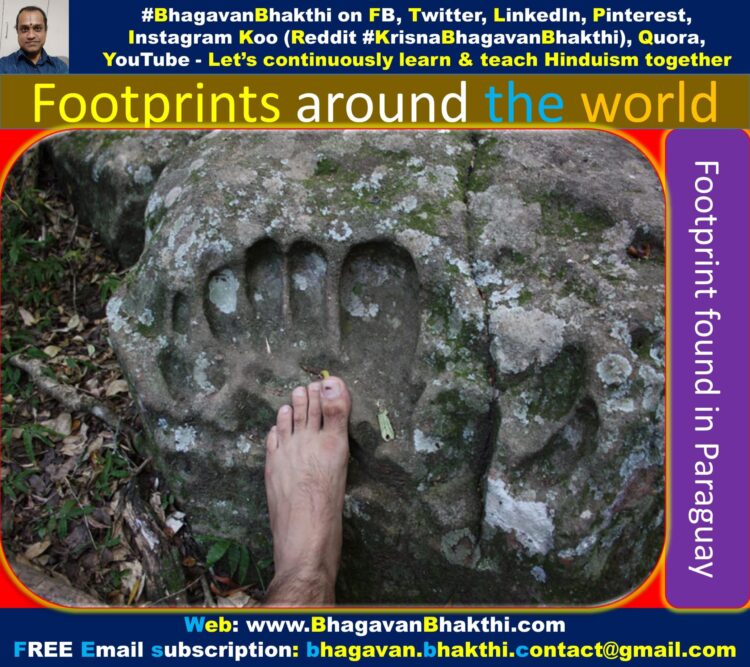 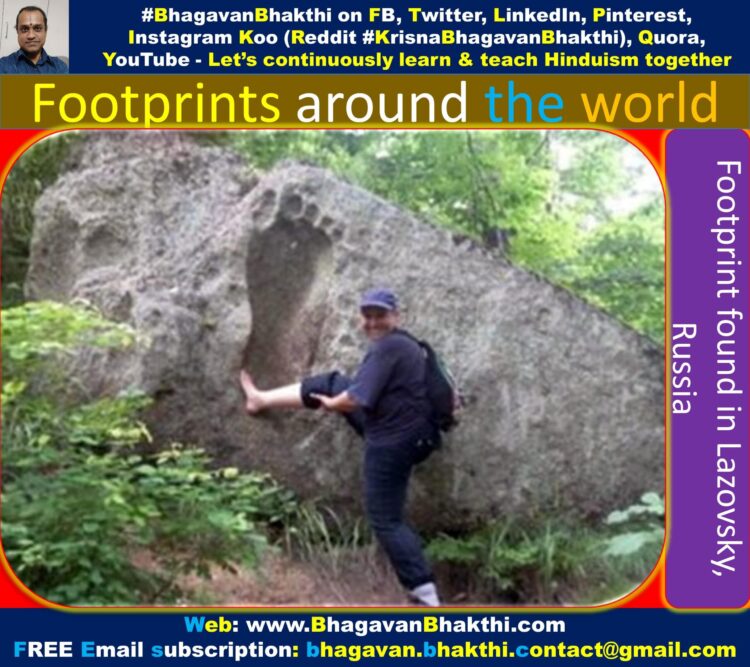 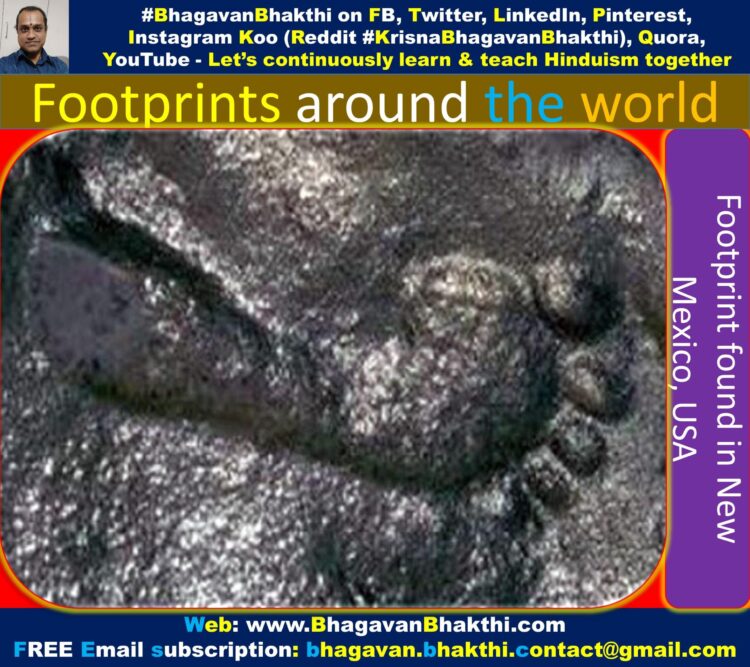